10 Colleges With Plenty of Vegan Options! 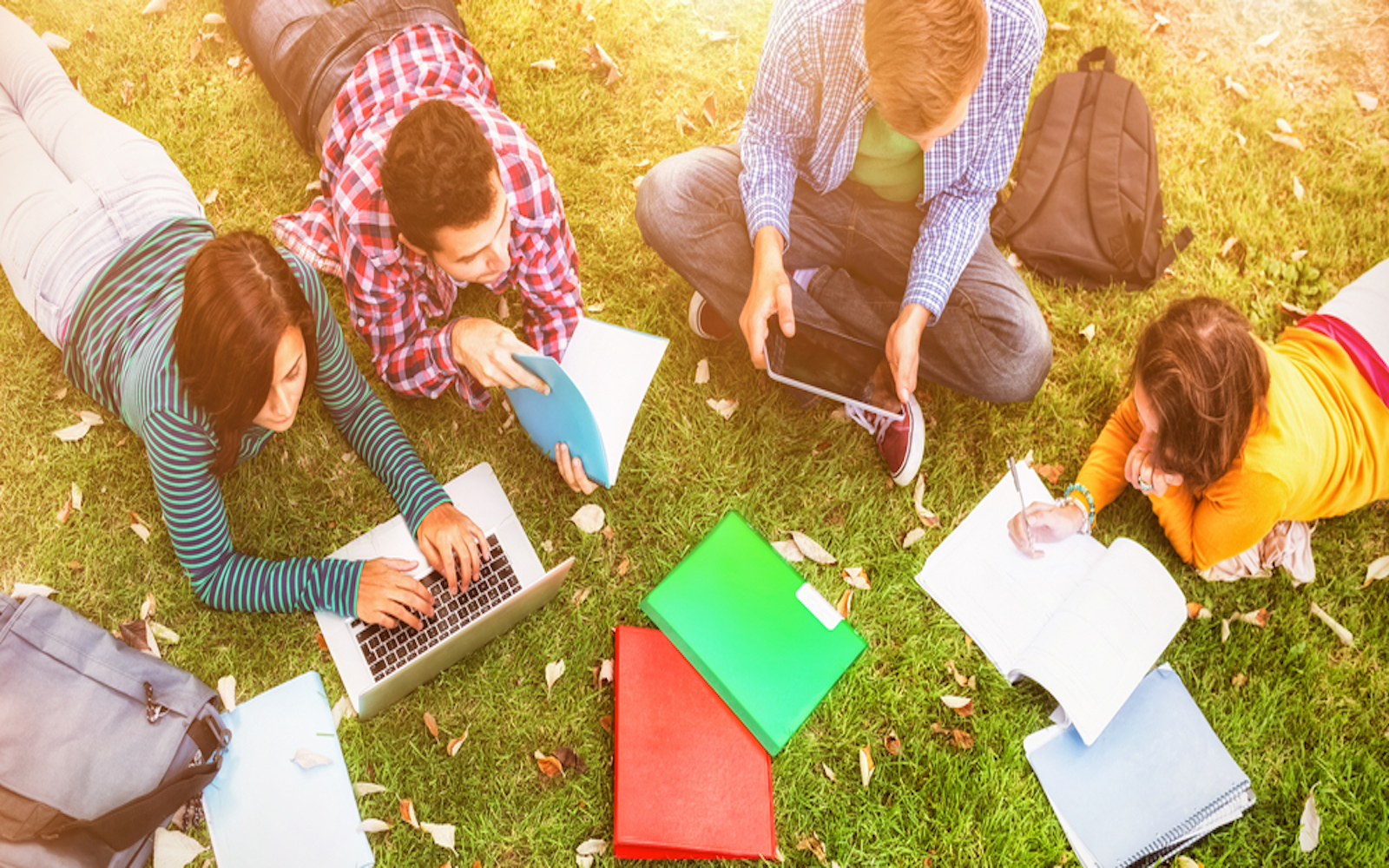 During your time spent in college, a large portion of it is spent in dining halls, both to socialize with classmates and friends and to nourish your brain at the same time. One of the best things about college dining halls is that you don’t have to worry about cooking your own dinners, and oftentimes you have access to a wide variety of food options. Meaning, you can totally pig out on pizza before that Human Sciences presentation.

However, there are times when eating in dining halls has its disadvantages for those suffering from certain allergies, or practicing a plant-based lifestyle. Just as the demand for vegan food, vendors, and menus rise, so do the strides when it comes to providing options for students following a vegan diet. So behold, below are 10 vegan-friendly colleges and universities that stand out in their plant-based efforts. 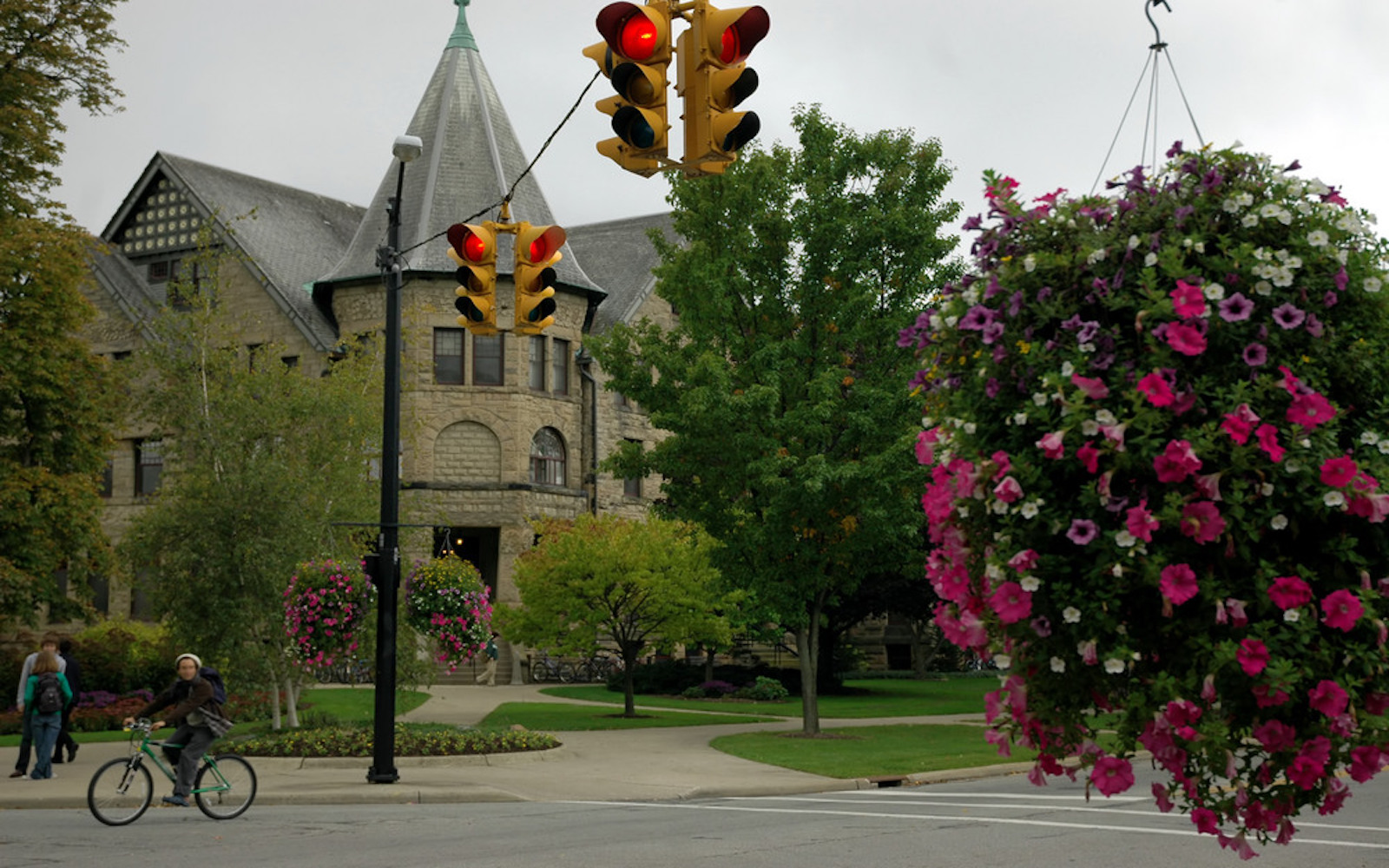 Oberlin College, located in Oberlin, Ohio, has a reputation for being committed to green living and the environment, so it’s no surprise that this college is totally vegan-friendly. The vegan dining possibilities are virtually endless. Their menu includes fruit smoothies at Decafe, fresh vegan pizza at Descomb, tofu at Stevenson, and the vegan sandwich of the day at Science Cart. Sometimes they also have a Moroccan-style vegetable tagine, beer battered tofu, and seitan pepper steak. The college also has two dining co-ops whose focus is 100% vegan and vegetarian food. Through them, you can take part in tofu-making workshops!

You can still eat tasty vegan food even if you’re not at Oberlin; if you want a fruit smoothie, try this Organic Burst Smoothie. Searching for some fresh vegan pizza? Then go for this Falafel Pizza With Grilled Zucchini or this Margherita Pizza, which is grain-free. We have plenty of vegan sandwiches too, like this Loaded Roasted Tofu Dinner Sandwiches or this Cranberry Chickpea Salad Sandwich. 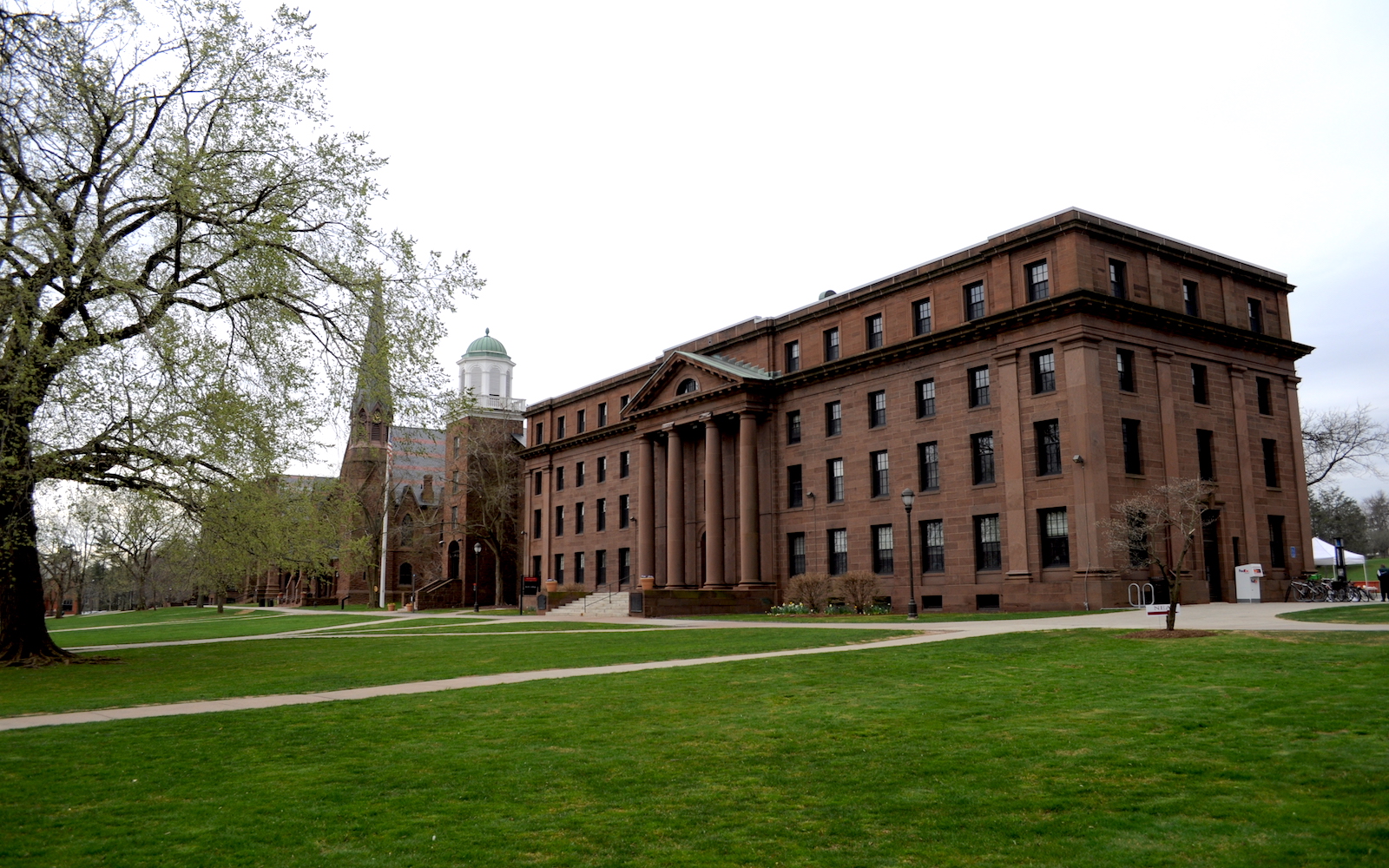 Located in Middletown Connecticut, Wesleyan University has had vegan chef Stephanie Zinowski since 2002. Lucky for them, this well-known vegan chefs biggest claim to fame is her vegan cooking classes and to-die-for vegan apple crisp. In these classes, she teaches students how to make cashew tofu, baked macaroni and cashew cheese, vegan fettuccini, vegan chicken red curry, and three-mushroom vegan ragu. Every other week, the campus hosts ‘Veg Out Tuesday,” where the dining hall goes 100% vegetarian and plant-based. How amazing is that? Their daily menu includes things like garden burgers, vegan grilled cheese, a butternut squash slaw, vegan cheese pizza, and freshly cooked pasta!

These are some lucky students! If you aren’t a student (or if you are and want to try your hand at cooking) you can make our Creamy Cashew Tofu Alfredo, this Creamy butternut Mac And Cheese, or this Mushroom And Lentil Ragu! 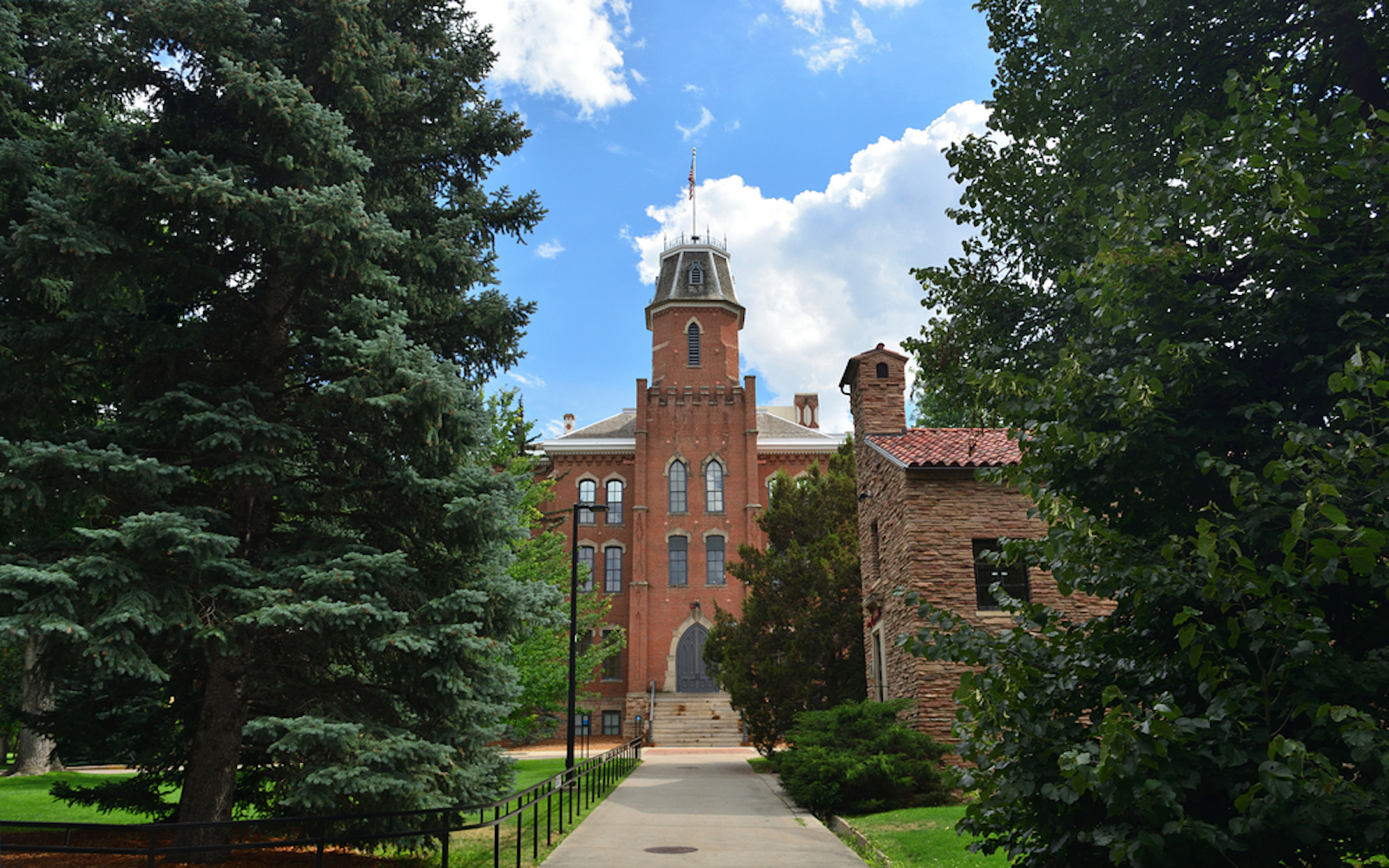 The University of Colorado Boulder has a pure passion for environmentalism, which is obvious in its vegan menus. The university serves and provides 50, yes 50, vegan meals a day. They have items like three-bean chili, hummus wraps, vegetable pakoras, chia coconut pudding, sushi rolls, tofu rancheros, seitan tacos and apple pies. They even have a Vegan Justice League activist group on campus. This is basically the vegan mecca of colleges! They received an A for PETA’s vegan report card, which is the highest of plant-based excellence for colleges.

Get an A in your own home with a Cauliflower Rice Sushi, Eggplant Hummus Wraps With Smoky Tomato Confit, Churrasco-Style Seitan Tacos With Roasted Brussels Sprouts, or this Chia Pudding With Blueberries recipe. 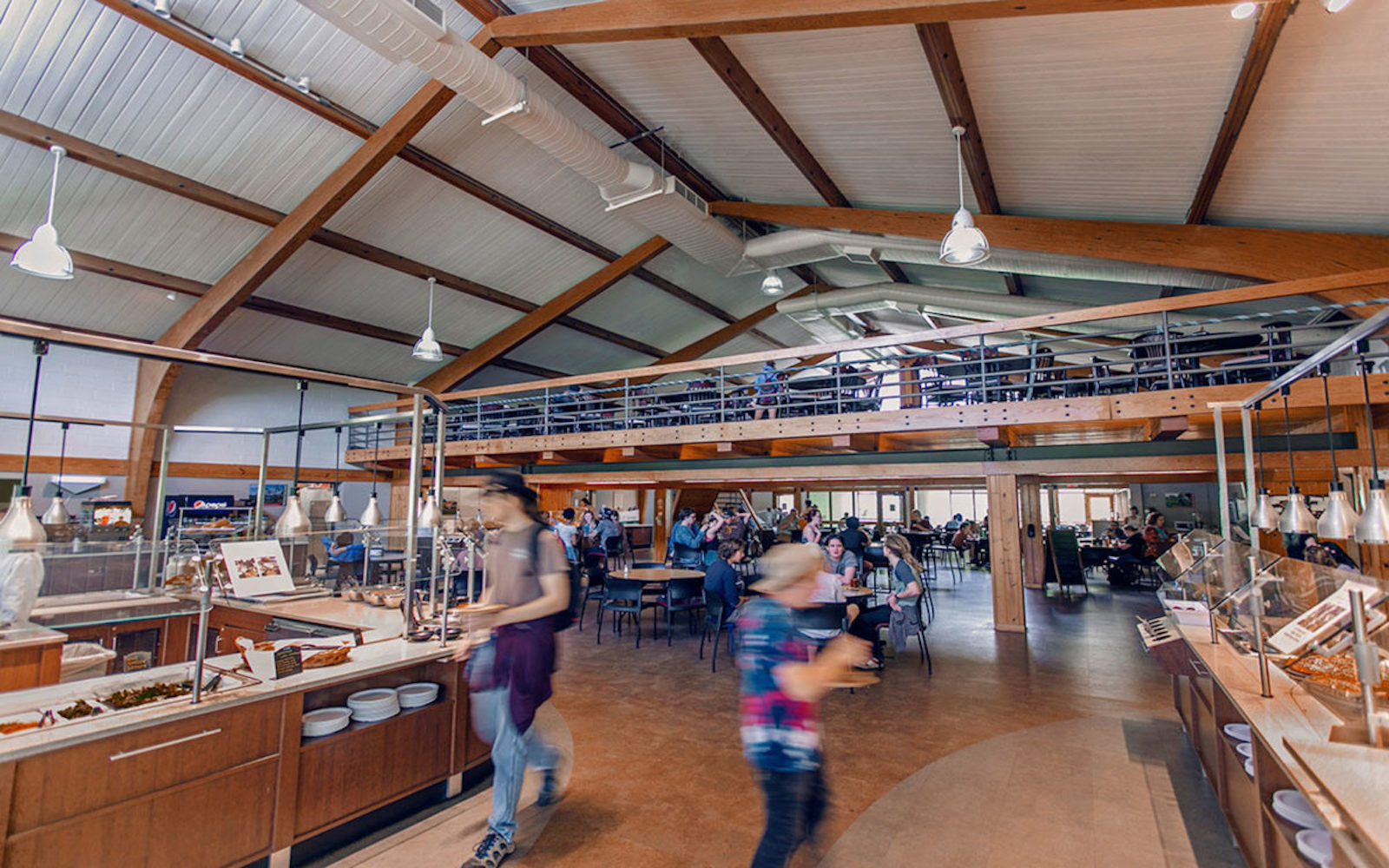 At Warren Wilson College, students initiated a completely vegetarian, but mostly vegan, dining hall called Cowpie Cafe. At this cafe, you enjoy meals such as stir-fried vegetables, salads, beet hummus pit, homemade seitan, and kombucha. They’re focused on eliminating GMO ingredients and replacing them with organic alternatives. Meals are served restaurant style and are made from scratch every single day, to ensure all ingredients really are plant-based. They also have pad thai style tofu, mango sticky rice, and tempeh tacos. Their menu always has a new variation, which is greatly appreciated. This college is located in North Carolina. Did we mention this college is supported by a working farm?

We have some recipes you can try at home, similar to these menu options. This Creamy Chipotle Beet Hummus is simply perfect, and this Homemade Simmered Seitan is delicious. You can also try some salads, like this Spinach Salad with Barley Bacon or this Pear Salad With Crispy Chickpea Croutons. 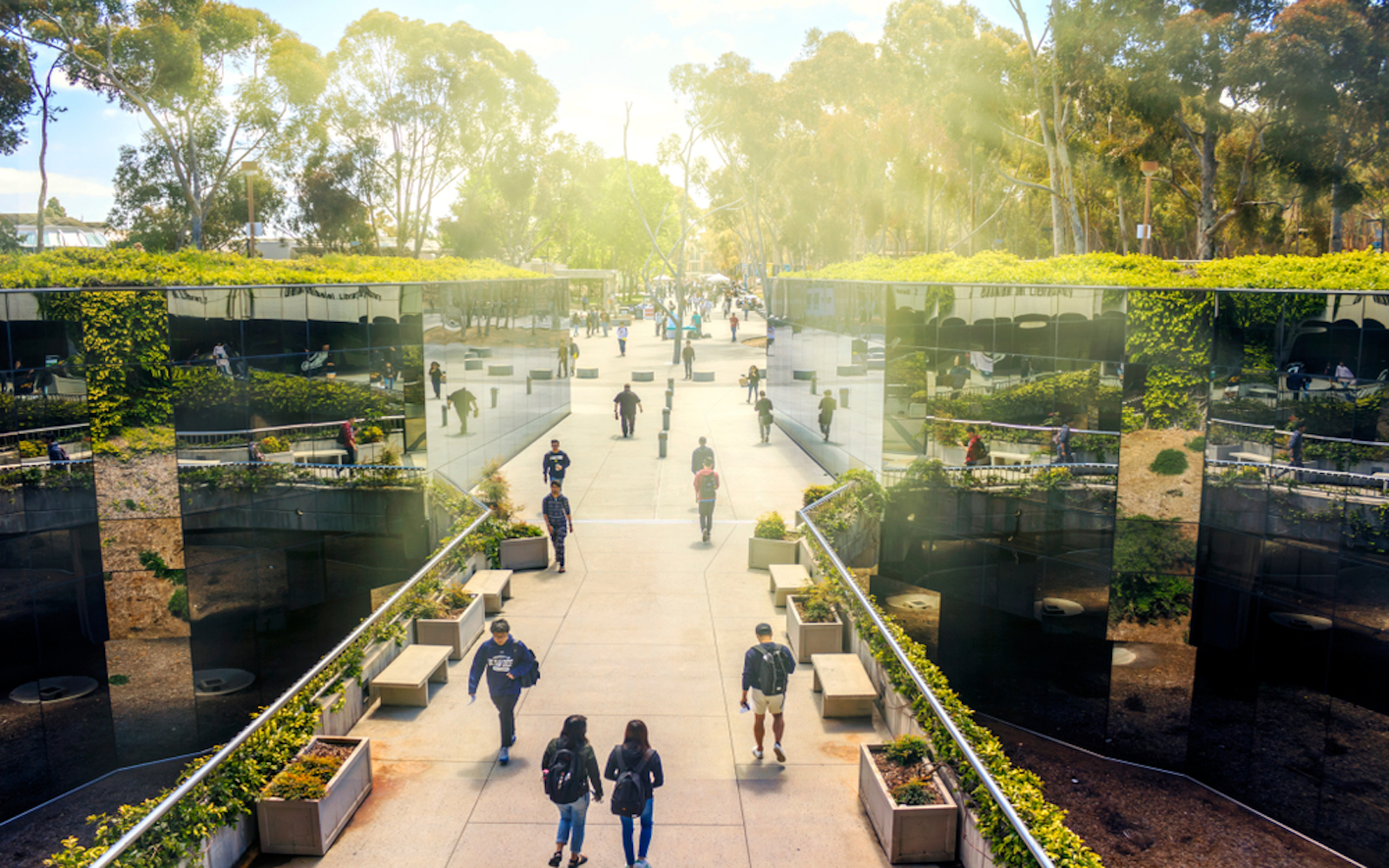 At the University of California San Diego, Roots opened up. Roots is an all vegetarian and vegan eatery that came about due to student demand. They serve a variety of items like spring rolls, gnocchi, jambalaya, and tofu udon. Yum. 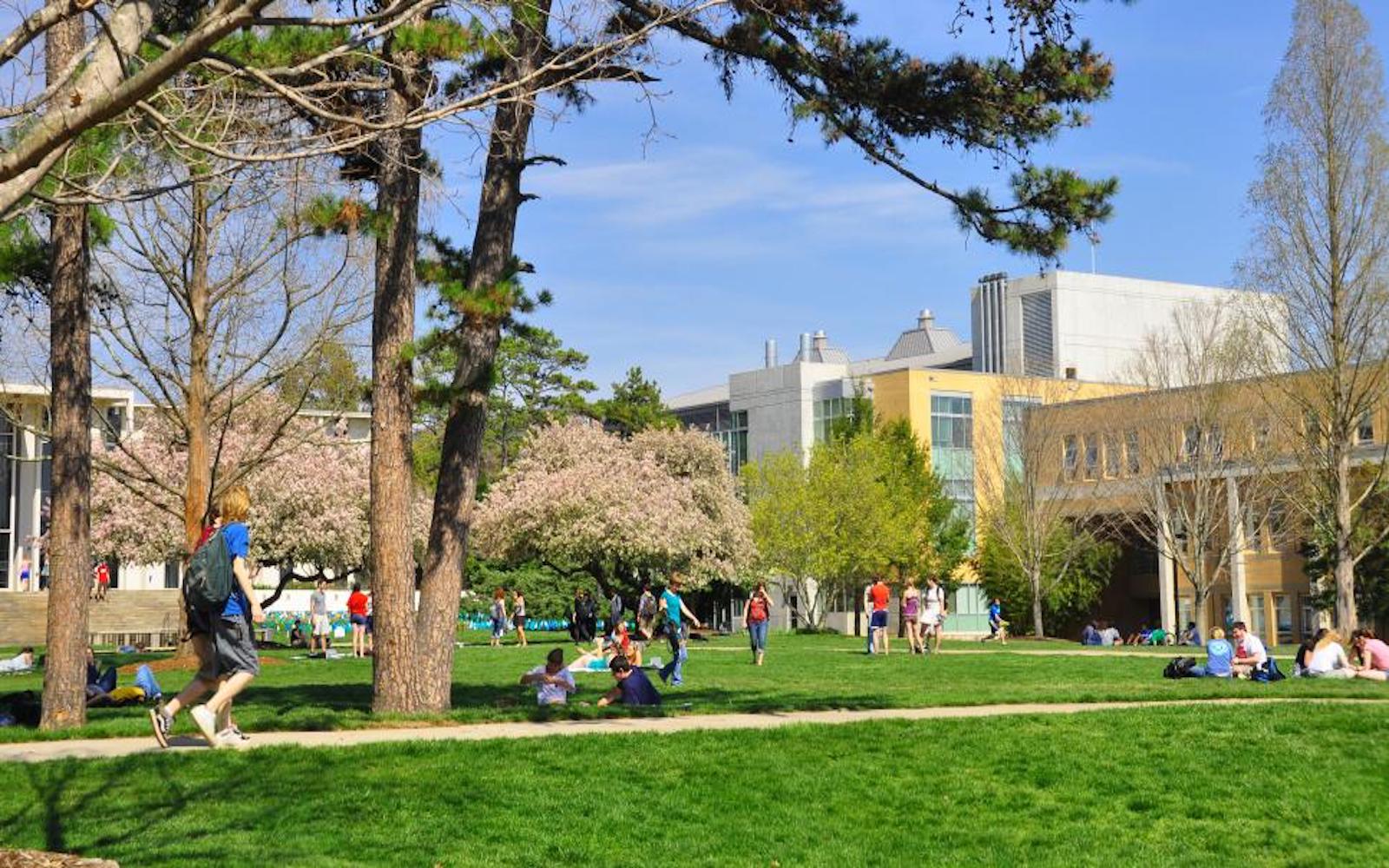 You’ll find plenty of vegan options at Brown Dining Hall, located within the University of North Carolina Asheville campus. They serve some of the best high-quality vegan food, from maple pancakes and spicy tofu scrambles to charred cauliflower, vegan chops, and tater tots. Their dining services work diligently to meet the needs of their guests with food allergies or dietary restrictions, all while providing delicious options that anyone would want to eat.

If you want to try and make your own at home, opt for these ‘Bacon’ and Maple Syrup Pancakes, this Crispy Seasoned Cauliflower, this Potato Hash and Tofu Scramble Skillet! 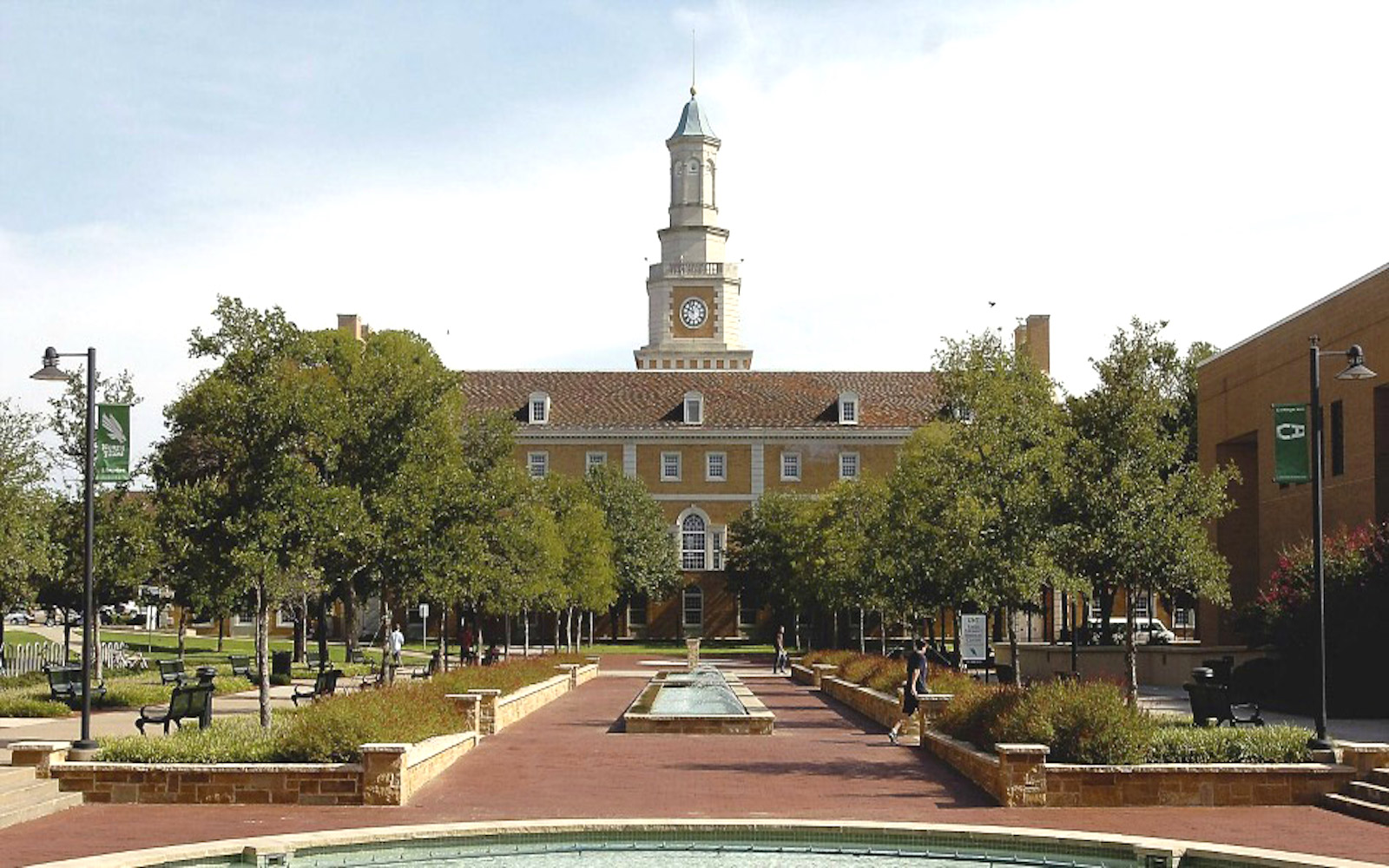 In 2011, The University of North Texas opened their vegan dining hall, Mean Greens. As soon as it opened, the meal plan sales skyrocketed. Mean Greens quickly became the most used dining hall on campus, serving up to 4,500 students a day! Some of the most popular dishes include fettuccini with greens, vegan sushi, vegan pancakes, soft-serve ice cream and polenta with mushroom ragout, all which sound delectable.

Our Horchata-Flavored Mochi Pancakes and Toffee Apple Pancakes will hold you over if you’re not a student. For vegan ice cream, try this tasty Chocolate Ice Cream. As for fettucini, we have this beloved Fettuccine With Oyster Mushrooms and Thyme recipe that you’ll want to keep creating over and over again. 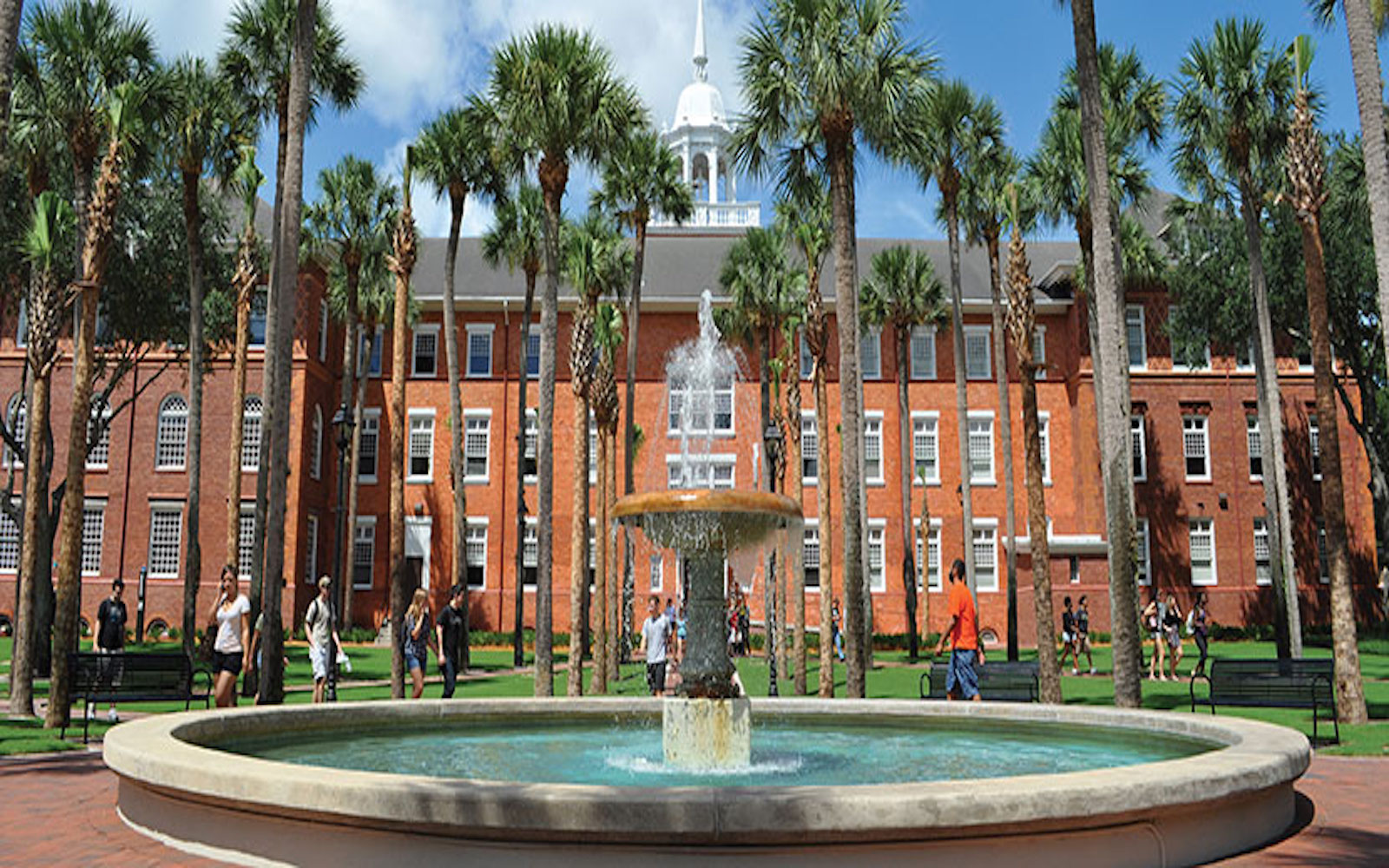 On the University of South Florida Campus, vegan activism is huge! More than 3,000 students showed up and arranged an animal rights campaign. After that, the campus’s animal rights group pushed for dining services to offer vegan options and that they did! You can munch on plenty; like a vegan black bean soup, vegan chicken patties, burritos, Boca burgers and soft serve ice cream that all the students enjoy on warm days.

Since all that sounds so appetizing, here are a few recipes to hold you over. Try our Chicken-less Burgers, Hearty Black Bean Soup, these Smothered Burritos and these Tempting Tempeh, Beans, and Rice Burritos. 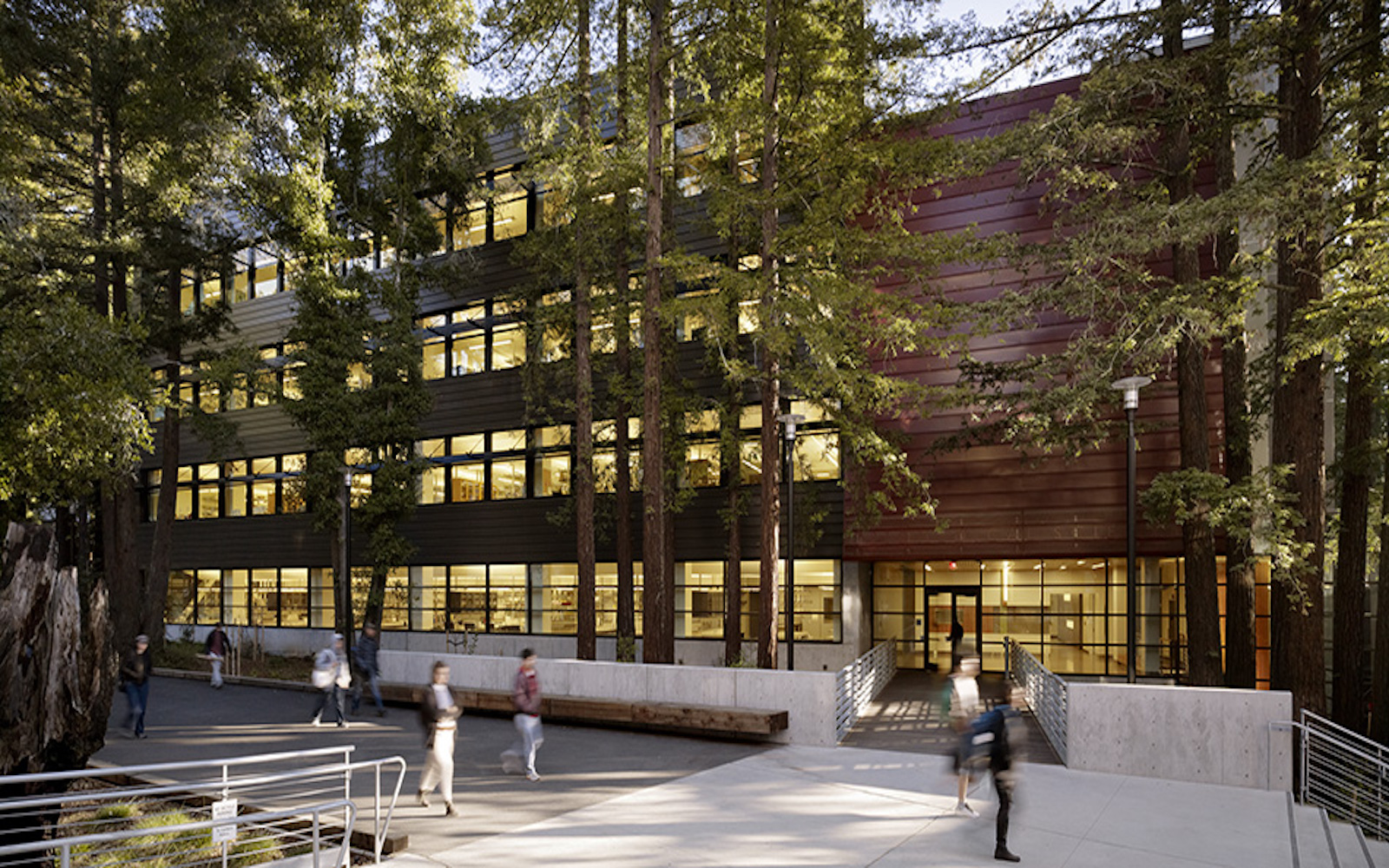 UC Santa Cruz has Meatless Mondays in the dining hall, every single Monday. Some of the vegan dishes they serve up include kung pao tofu with udon noodles, almond seitan, vegan chicken Milanese, tofu scrambles and Vegan Garbanzo Sesame Soup. They also have a tasty vegan blackberry pie! Mmm. What’s better than finishing homework with a slice of pie? Their on-campus activist group is called Banana Slugs for Animals.

Now that you heard what this campus has, I bet you’re craving some of what they serve! Try this Seitan With Chickpea Flour recipe, or this Pumpkin Ginger Chickpea Soup. For blackberry pie, your best bet will be this Lemon Blackberry Pie. 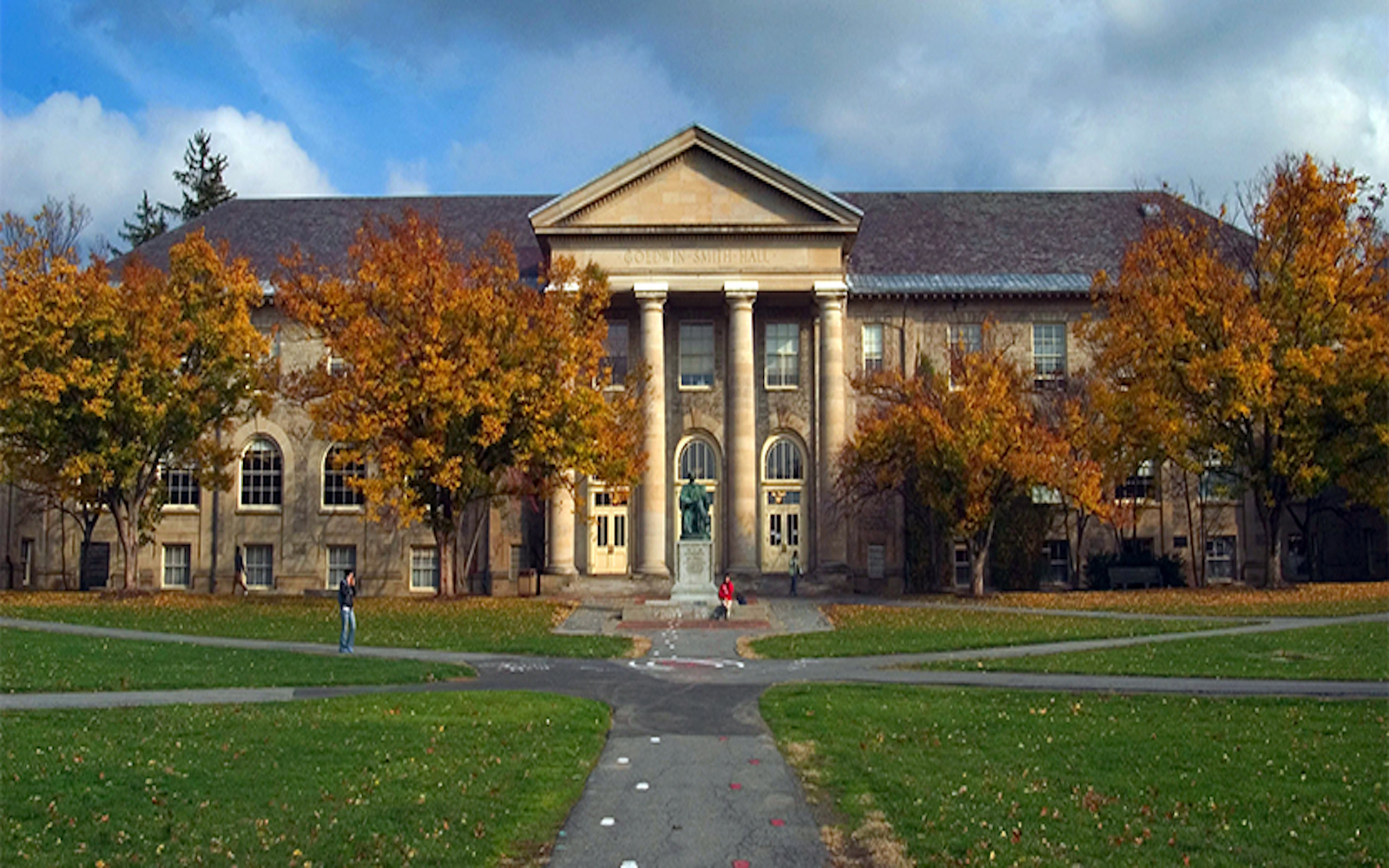 At Cornell University, there are several vegan-friendly spots on campus, including the Va-Va-Vegan Bar, and One World Cafe, which has a totally plant-based menu. Their main advocate for healthy living is Dr. T.Collin Campbell, who pushes and supports low-fat, whole foods and a vegan diet. Cornell Dining has earned a grade of “A” on peta2’s Vegan Report Card for its vegan offerings on campus. Have options like fresh cut fries, enjoy the salad bar, African peanut stew and a vegan Reuben; and the barbecued tofu with smoked tomatoes.

For some similar options to make in your own kitchen, try these Baked Yam Fries With Spicy Hummus, this Mayim Bialik’s Reuben Sandwich, this West African Peanut Stew and this Braised BBQ Tofu.