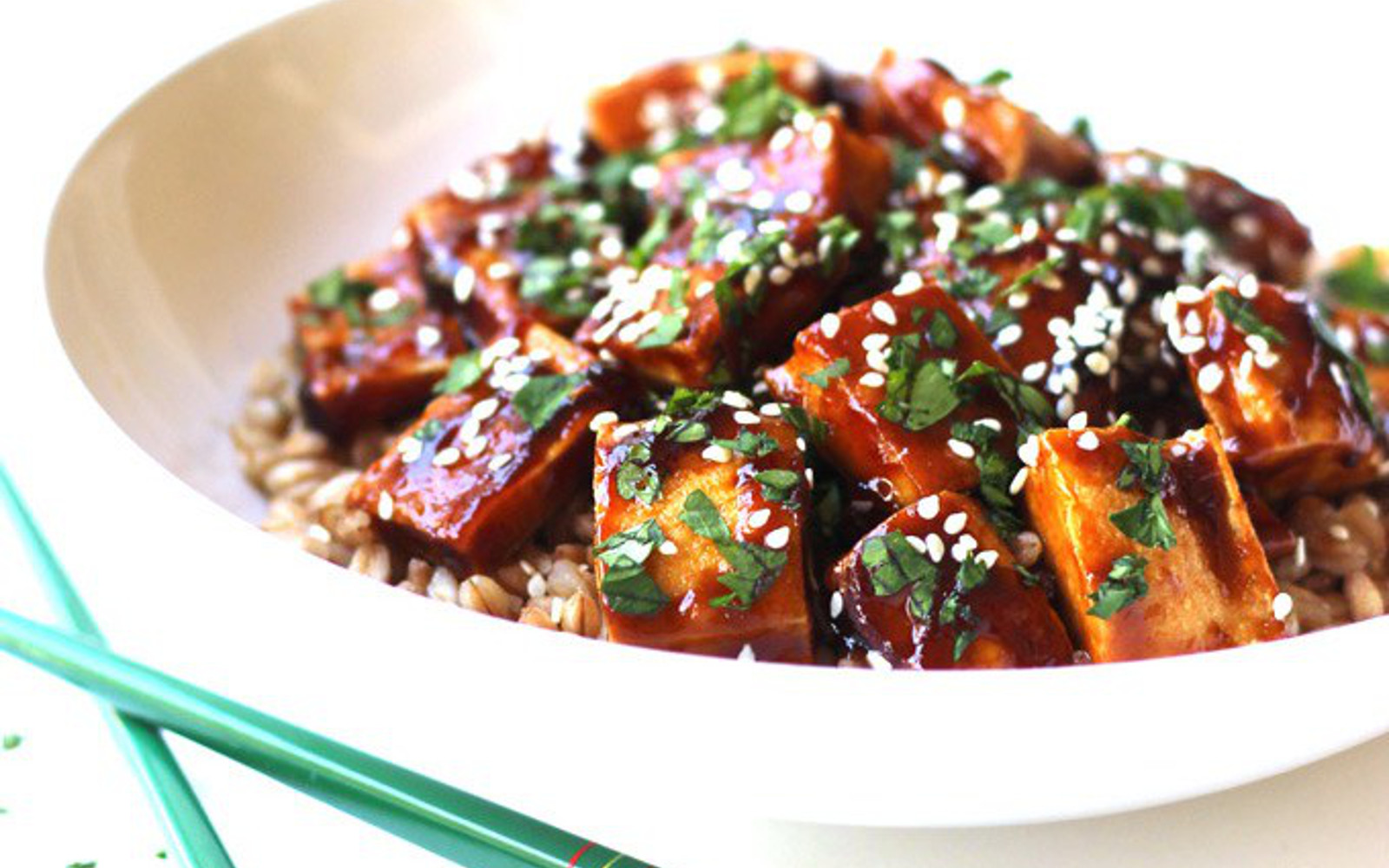 Have you ever looked over a Chinese-American take-out menu and felt overwhelmed by the sheer number of options available? When we go to our local bodega, we know we’re either ordering a veggie-filled sub or grabbing one of those mysteriously ever-yellow bananas on the counter — with Chinese take-out, it’s an entirely different story.

While the seemingly endless number of menu items might appear daunting at first sight, the good news is that most of those dishes are actually comprised of the same key ingredients — and once you familiarize yourself with those, you’ll realize you’re not trying to decipher which dish among hundreds you want to eat. Rather, you’re choosing between a set number of similar dishes with minute variations.

Below, we’re taking you through popular Chinese sauces and condiments, so you can recreate your favorite take-out dishes at home — vegan style.

The good news for plant-based eaters trying to order takeout is that black bean sauce, which is made from a base of fermented soybeans, is naturally vegan. Made from fermented and salted soybeans, soy sauce, and, on occasion, garlic, the sauce’s flavor is both bitter and sweet.

Try pairing black bean sauce with tofu and vegetables, like in the recipe pictured above for Eggplant Tofu With Spicy Black Bean Sauce. Or, pair it with this savory dish of Black Bean Tofu and Red Peppers.

Let’s turn our attention to everyone’s favorite tangy and sweet sauce for deep-fried fare. Essentially, a sweet and sour sauce is just a combination of sugar and vinegar, which means the actual composition of the sauce can vary from place to place — although it should be vegan.

In Chinese cookery, for example, a sweet and sour sauce could include different flavoring agents (such as garlic, onion, ginger, soy sauce, or fruit), or even a thickening agent, like cornstarch. In American-Chinese cookery, a sweet and sour sauce might include ketchup and brown sugar. What you’re really looking for is a balance between sugary ingredients and acidic ones to nail the flavor profile.

Don’t be deceived by the name — plum (also known as duck) sauce is plant-based. Traditionally served with egg rolls or other deep-fried dishes, plum sauce, which has a tart-sweet flavor profile, is typically made with sweet plums (or another sweet fruit — apricots are pretty standard), sugar, vinegar, a heat source (such as chili pepper), ginger, and salt.

Check out this recipe, pictured above, for “Egg” Rolls With Homemade Duck Sauce. Bonus: the sauce only calls for five ingredients!

Thick (like, molasses-thick), brown, spicy, and sweet, Hoisin is often used as a dipping sauce, as a marinade for protein, or as a dressing for salads. Even though hoisin is actually Chinese for seafood, the sauce is naturally vegan. Preparations may vary across regions, but typically hoisin is made from soybeans, red chillis, and garlic, while Chinese five-spice, sugar, a starch (potentially sweet potato starch), and vinegar are often added as well.

Try making the recipe for Super Easy Hoisin Tofu, which is pictured above, or if you’re in the mood for some good ol’ Chinese-America mega fusion, make this Hoisin Black Bean Burger With Spicy Sesame Sauce.

If someone’s talking about char siu, they’re talking about Chinese barbecue sauce. You’ll mostly find char siu, which translates to “fork roast” on protein such as pork — but the Cantonese-favored sauce is actually a marinade and spice mix made from hoisin, some kind of sweetener (opt for something like agave instead of honey to keep it vegan), and Chinese five-spice.

Go all out and try this recipe for Char Siu Pizza: Pizza With Chinese Barbecue Sauce Topped With Marinated Shiitake Mushrooms, pictured above.

Hot and sour sauce is similar to sweet and sour, only spicier, due to its inclusion of chilis. Soy sauce, chilis, garlic, sugar, and vinegar are common components of this sauce, even though — are you beginning to see a trend, here? — preparations will vary across regions.

This recipe for Szechuan Hot and Sour Soup, which is considered a regional dish in both Mandarin and Szechuan cuisines, also features another Chinese sauce — Szechuan sauce, which is currently massively popular, due to Rick and Morty. You could also try making your own Spicy Szechuan Noodles if you want to get in on the fun.

General Tso’s sauce is massively popular in American-Chinese cuisine, but it’s probably not going to be available to you in authentic Chinese restaurants. Nevertheless, it’s generally comprised of soy sauce, rice wine, rice-wine vinegar, sugar, cornstarch (to give it that syrupy, thick texture), dried and whole red chili peppers, and garlic. If you’re watching your sodium intake, beware — this stuff is chock-full of salt.

This gluten-free recipe for General Tso’s Tofu showcases how General Tso’s is generally enjoyed: paired with a fried or deep-fried protein! This General Tso’s Cauliflower is good for those wanting more vegetables, while General Tso’s Seitan is also delicious.

While oyster and fish sauce is most commonly used in Thai or Vietnamese cooking, it’s always worth it to double-check that your dish doesn’t include these two condiments, if you want to order a vegan meal.

Both oyster and fish sauces are thin, pungent, and watery sauces that are made using salt and fermented fish — typically these are anchovies, but they could also be ground shrimp.

Worry not, however: you can make your own Vegan “Fish” Sauce to achieve a umami flavor in your cooking. Put your knowledge to the test and make this Soba Noodle Bowl With Homemade “Fish” Sauce!

Make sure to check out our full list of vegan Chinese recipes for more!