Why These 5 Wild Animals Should Never be Kept as Pets 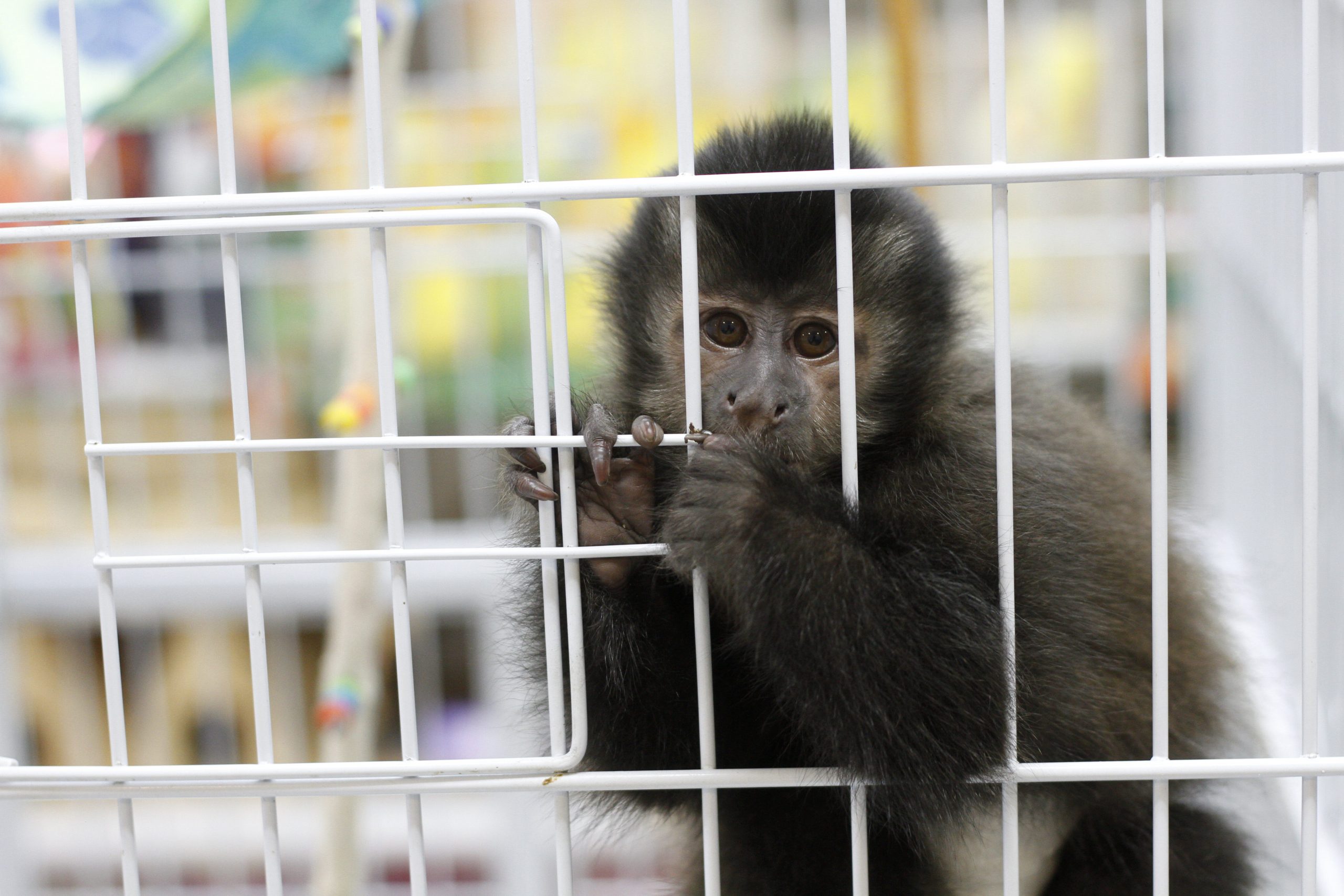 Pets are a great addition to most families. Whether they’re a cat, a dog, or some other type of pet, they always know how to make us smile and comfort us through difficult situations. There is actually scientific research that supports the idea that pets are beneficial to both our mental health and well-being. They enhance our moods, soothe stress, and encourage an active lifestyle among multiple other benefits. Thus, while our pets are sometimes rescued from cases of neglect, abandonment, or abuse, they, too save us in some ways.

Having a pet is obviously a wonderful experience; however, it’s important to recognize that not all animals can or should be pets. There are many wild animals that are adorable to look at or may make someone feel “cool” for having in their home, but they are not suited to being household pets. These animals have specific needs that a captive situation, especially in a human home, cannot meet. This includes social interaction with others of their species, space to move around in, and the mental stimulation of a dynamic environment.

Keeping wild animals as pets is not only harmful to the animals themselves, but also the people who come in contact with them. Their stress response to the situation may be to lash out and harm someone. These animals also may carry zoonotic diseases.

While the aesthetic of owning a certain wild animal may seem appealing, pets are not accessories or decorations. Keeping these animals as pets is not only probably illegal, but it is also extremely harmful to the animals and dangerous for everyone involved. Here are five of the many wild animals that should never be kept as pets:

In 2012, estimates for the number of privately owned big cats ranged from 10,000 to 20,000 and currently, the number of tigers living in captivity greatly outnumbers those that are still living in the wild. The total number of wild tigers is around 3,900 and in the U.S. alone, there are approximately 5,000 tigers in captivity. Thus, owning a big cat as a pet is a conservation nightmare. The requirement of a pet big cat involves splitting up a cub from its mother, which is incredibly traumatic for them both. The mother may also be kept in captivity and forced to undergo this painful separation over and over. However, some big cats in the big cat pet trade are also taken from the wild, which again, is terrible for the conservation of big cat populations. Furthermore, while the cub may start out small and cute, they grow to be quite large. This is a problem because many people cannot provide an appropriate amount of space for these animals as well as because big cats are predators. As the big cat grows larger and more stressed out, likely suffering from zoochosis, they could attack and overpower someone who approaches them. Because these cats have been raised around humans, they can never be released back into the wild, which further debunks any “conservation” excuse that private big cat owners try to use.

Most birds fly. It’s the first association most people would make when they think of a bird. Sadly, people who decide to keep birds as pets, leave them in cages for their whole lives. Sometimes, people even get buy birds with clipped wings so that the bird can no longer fly. Even though this means that the bird might not be kept in a cage all day, every day, they still had to suffer an unnecessary and traumatizing loss. Plus, many birds that people choose to buy as pets are endangered and smuggled in extremely inhumane conditions. In captivity, birds suffer from stress, loneliness, and premature death. They are complex beings who need more stimulation than they can get from perching in a small cage or hopping around someone’s room.

While wolves and dogs may seem quite similar physically, their behaviors and dispositions are entirely different. Humans have kept domesticated dogs for thousands of years, whereas wolves have remained in the wild. Thus, they have developed different instincts that make them better suited to each environment. While wolves’ more predatorial and aggressive behaviors may not be as apparent while they are young, the tendencies will become more pronounced with age. Raising a wolf from when they are a puppy won’t stop these instincts from coming through. Because wolves do not exhibit the dog-like behaviors that people hope for, they are relegated to being chained up outside. This is especially sad considering that wild wolves walk or run up to 100 miles every day. Furthermore, there aren’t any approved rabies vaccines for wolves so if they are surrendered or confiscated, they usually get euthanized. Even if they are lucky enough to end up in a sanctuary, which is the best possible outcome for wolves bred to be pets, they still can never return to the wild. Some people have started getting “wolfdogs” assuming that they’ll get the look of a wolf and the attitude of a dog; however, that is often not the case. Thus, these poor wolfdogs suffer just like a wolf does when kept as a pet.

While most people are afraid of alligators and crocodiles and thus, prefer to keep their distance, there are many people who try to keep these animals as pets. They usually get the animal when it is just a baby, as it is much less aggressive and of course, smaller. However, alligators often grow up to fifteen feet and crocodiles, up to eighteen feet. While they’re young, alligators and crocodiles seem cute and easy enough to handle, however, with age they become more demanding to take care of as a result of their size, strength, and behavior. Oftentimes, these animals end up neglected and plagued with various ailments, such as deformed jaws or spines, as a result. Because they are so difficult to care for, owners often abandon their “pet,” which can be dangerous since the poor animal probably never learned the fear that their species typically have of humans.

Tens of thousands of primates around the world are kept as pets, but sadly life as a pet causes primates severe emotional and psychological distress. This is especially due to primates’ needs for social interaction with their own species and a large amount of space to roam and climb around in. Without the opportunities to exercise, interact with the natural world, and socialize, primates become depressed and agitated.

The process of obtaining a primate for a pet is in itself incredibly cruel. These poor animals are stolen from their mothers, who are often shot and killed, which causes lifelong trauma since most primates are family-oriented. Furthermore, some owners treat their pet primates as entertainment, giving them cigarettes, alcohol, and various other items that have an anthropomorphizing effect. The owners may also abuse, medicate, and mutilate primates who act out or become aggressive, which is usually a response to the stress of captivity. Sometimes the psychological damage is so severe that even years of rehabilitation cannot heal them.

What Can You Do:

Ultimately, many wild animal pet owners end up killing, abandoning, or surrendering their pets. Abandoning these pets has disrupted the balance of various ecosystems and endangered people’s lives. While there are many reputable sanctuaries that are able to take in and give wild animals that used to be pets the closest experience they will ever know to living in the wild, these poor animals still have to live with the trauma they endured and they will never get to be released into the wild.

You might be thinking that if you were to have one of these animals, you would give them a great life with activity, toys, blankets, etc. However, these animals are wild. Period. They are not meant to live in human households and doing so causes unnecessary stress and suffering. Furthermore, the exotic and wild animal pet trade is an extremely cruel and inhumane industry that needs to be put to an end. Animals are kept in tiny cages, overbred, and sold to people who can pay, regardless of how they will treat that animal. The industry rips mothers away from their children and condemns animals to an unnatural and stressful life. Owning pets may have some benefits for the pet owner as previously mentioned, however, pet owners should first and foremost, always think of what is best for their animal. In the case of wild animals, what’s best for them is to never make them pets in the first place.

If you want a pet, great! There are so many dogs, cats, guinea pigs, and other domesticated animals waiting in shelters to find their forever homes. It’s also important to remember that even if you do adopt a domesticated animal, they still have needs that must be met. They may thrive as a pet, however, that also depends on the care and love that their owner provides.

Sign these petitions to help wild animals in the exotic pet trade!