Sugar Gliders are Adorable, But They Don’t Belong in Your Pocket! 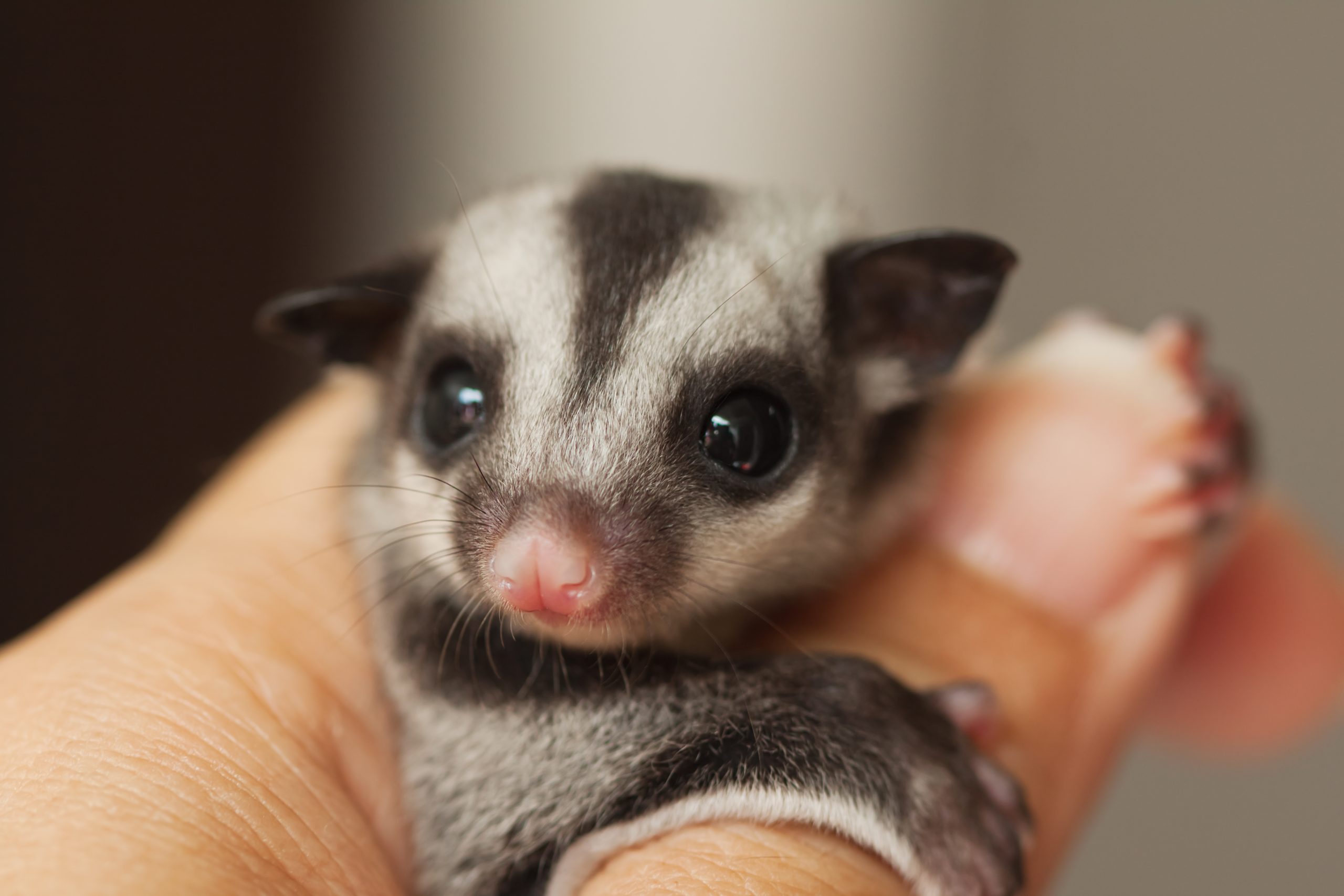 The wildlife trade is one of the most lucrative illicit markets on the planet. The sale and trade of exotic animals garners an enormous profit valued at as much as $20 billion a year and is second only to the drug trade in terms of its worth. Some 13 million animals are taken illegally from their homes for the pet trade. In the past 40 years alone, around 52 percent of the world’s wildlife has disappeared. Factors like climate change and habitat loss are contributors to this decline, but the wildlife trade is key. Many of these animals are captured and sold alive as exotic pets. One such species that has gained popularity as a trend pet over recent years is the sugar glider.

Sugar gliders are tiny marsupials that fit in the palm on your hand – think the world’s smallest opossum mixed with the ittiest bittiest Koala and you have a sugar glider. With their pint-size bodies and big, bold eyes, there’s no denying that they are some of the most adorable creatures on this planet. Sadly, this has led these precious animals to now be the most exploited in the global wildlife trade.

These tiny marsupials are largely trafficked from Indonesia. These animals are easily collected from the wild since they sleep together in groups, which allows large numbers to be captured by hand in a short space of time. According to reports, wild-caught Sugar Gliders are then sent to breeding farms in Jakarta, from where they may be exported under the guise of being captive-bred.

The species is classified as of “Least Concern” in the IUCN Red List of Threatened Species, but they are subject to a government-issued quota that dictates how many can be taken out of the wild each year. Experts say that these quotas are repeatedly ignored. For example, In 2011 this quota supposedly restricted the harvest to just 225 individuals per year. However, Malaysia’s Department of Wildlife and National Parks, Perhilitan, had almost 9,000 sugar gliders registered with the Department at the time, suggesting quotas were being widely exceeded.

Malaysia and other countries like Australia, have since banned pet ownership of these animals, but these animals are still gaining popularity as pets around the world, particularly in the United States, where they are bred to be pets.

One of the most common sellers of sugar gliders in the U.S. is a company called Pocket Pets. This traveling company can often be seen selling sugar gliders at malls, festivals, conventions, and most recently, at the Florida State Fair. In addition, viral images and videos of people with these animals help perpetuate the problem, by making it seem normal and acceptable to keep wild animals as pets. Their wide availability and social acceptance are leading these animals to be kept in thousands of households throughout the United States.

Before these animals are even purchased, they are subject to extreme cruelty. After being stolen from their families in the wild,  they are placed into overcrowded cages and transported many miles away from home with inadequate food and are subject to rough handling. In an undercover video, investigators revealed that these animals often end up being mauled or suffocated to death.

Animals who do survive such hellish conditions face even more trauma. That’s because when these animals are kept as pets, they are denied everything that’s natural to them.

For starters, sugar gliders are nocturnal, which means they are on completely opposite schedules than their keepers. In the wild, they live in trees in large colonies and spend most of their evenings foraging for sap (hence their name) and playing with family and friends. In addition, their natural habitats are in the forests of Indonesia, Papua New Guinea, and Australia, which are nothing like the inside of a home or cage. As pets, they are denied the companionship of their own species, fresh air, the outdoors, and the opportunity to climb or do almost anything except pace or sit and stare out of a tiny cage.

Sadly, like many other “pet” wild animals, sugar gliders often end up abandoned or neglected once the novelty of owning a rare animal has worn off. Even well-intentioned guardians generally lack the knowledge, experience, and a commitment to provide these animals with adequate care.

Sugar gliders have a lifespan of between 12 and 15 years. That’s a big commitment for someone who is simply looking for a novelty. Sugar gliders are also extremely active. They love to jump, hover around, and glide, which means they need the space and accommodations to do so. Unless you have a forest in your home, a person simply can’t provide the proper environment for these animals. In addition, sugar gliders have very unique diets of fruit and insects. Vets across the country, though are coming across severely malnourished and obese gliders as clueless keepers feed them anything from dog food to fast food.

Gliders are also very social animals and need constant attention. Even the most popular sugar glider shop on the internet states that these animals cannot be left unattended.  All of these things that must be taken into consideration when looking after an exotic animal. Since many people purchase these animals without such knowledge, many of these animals suffer or even die prematurely.

It can be tempting for some people not to purchase these unique animals, but the simplest thing one can do is to avoid the temptation. Depriving these beings of their home, family, and everything that is natural to them is wrong. The good news is that consumers have the power to shut down the wildlife trade altogether. Click here to learn how.

Actions speak louder than words, as they say, so if you want to help, here are some ways you can: