Tiger King: The Story Netflix Neglected to Tell You About Captivity and Exploitation of Endangered Tigers 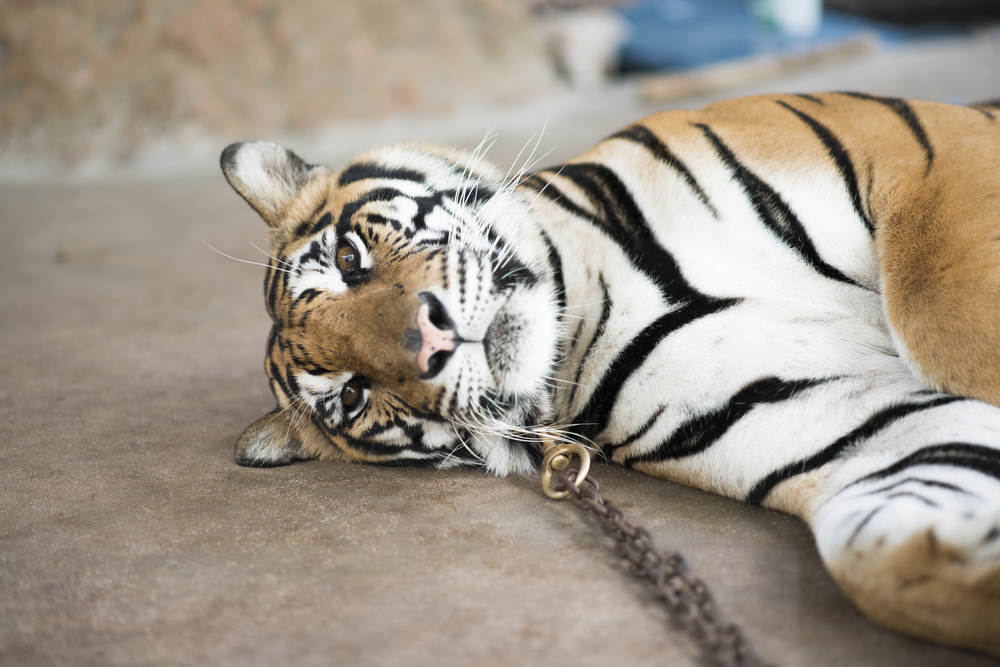 While in quarantine, it seems that all everyone is watching is Netflix’s Tiger King: Murder, Mayhem, and Madness.

The seven-part documentary follows former big cat owner Joe “Exotic” Maldonado-Passage, who is now serving a 22-year sentence for violations of the Endangered Species Act and the Lacey Act as well as hiring a hitman to kill Carole Baskin, an animal activist, who had been fighting to end private big cat ownership in the United States.

Not only does Tiger King portray a known abuser of animals in a crazy-yet sympathetic-light, but it also misses the large difference between legitimate sanctuaries who care for animals and the zoos owned and run by the likes of Joe Exotic, Doc Antle and Jeff Lowe.

Here is what Netflix missed from the series: 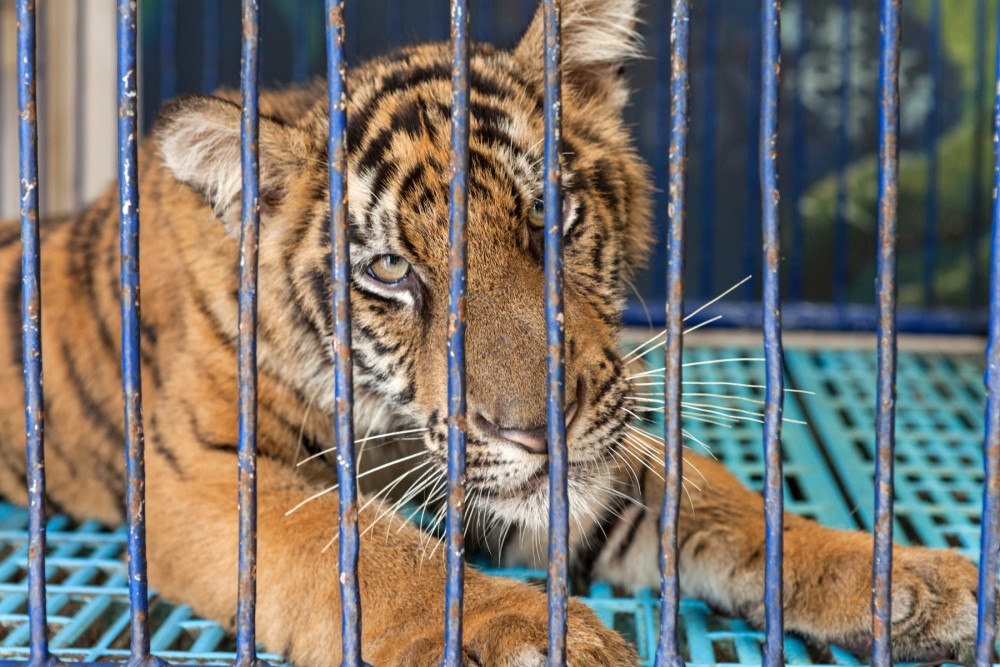 As the demand for tiger selfies grows, mature tigers are forced to breed continuously to produce cubs so their babies can be handed to tourists for their Instagram selfies. This constant handling by tourists and accompanying loud noises is very stressful for young cubs, making these animals susceptible to illnesses, as well as injuries.

Throughout the docuseries, you can see Joe Exotic or his employees taking newborn tiger cubs away from their mothers within days of birth or sometimes as they’re being born. Tigers cubs in the wild typically spend up to 2 years with their mothers. This separation is just one of many reasons why captive tigers suffer so much in entertainment venues.

When they’re not being passed around for photos, these cubs are often kept chained up or left in small, barren cages. In Tiger King, we see that Joe Exotic leaves newborn cubs in playpens while they cry out for their mothers who aren’t able to comfort them.

But this doesn’t just happen in the US. A World Animal Protection report found that tigers suffer immensely for selfies taken in Thailand. One staff member told our researchers that starvation is used to punish tigers when they make a ‘mistake’ while other methods are used to inflict pain and fear. Not only does this demand for entertainment cause immense suffering to big cats, it also promotes the poaching and trade of wild tigers.

Below you can find further resources on the cruelty that goes along with taking selfies with tigers: 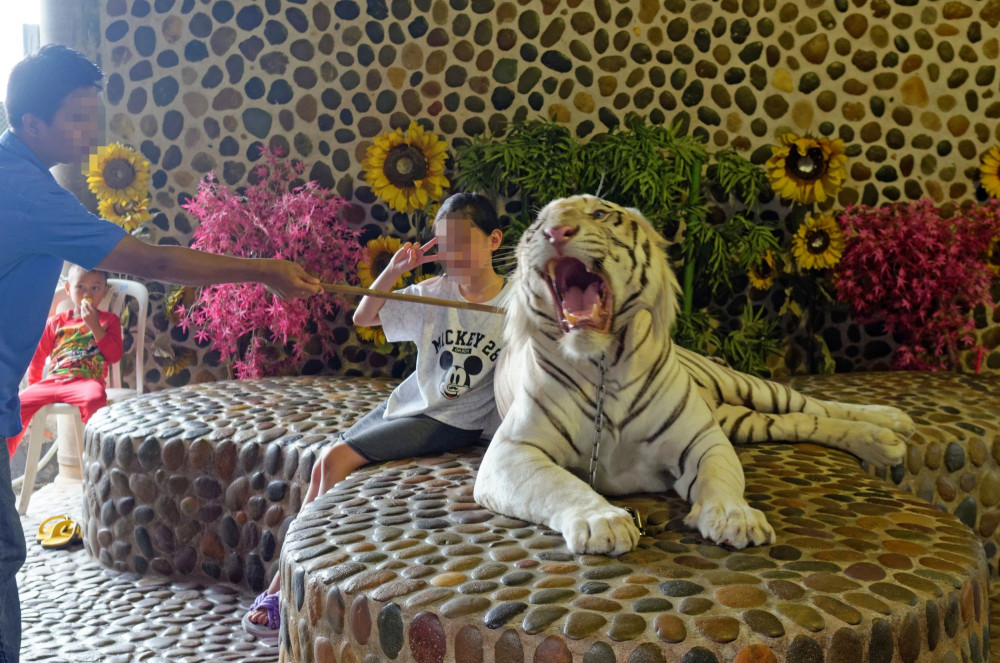 Of all the tigers in the docuseries, white tigers easily have to be the most exploited throughout the entertainment industry. These big cats—which merely have a genetic mutation and are not a separate species of tiger—are often forced to inbreed to keep the supply coming.

Inbreeding (the practice of mating closely related animals like siblings) results in major health issues such as crossed eyes, clubfeet, spinal deformities, defective organs, and cleft palates. In the series, Jeff Lowe is driving a convertible with a young, cross-eyed white tiger.

If a white tiger gives birth to orange tigers (which happens approximately 75% of the time), they are considered ‘throwaway’ tigers and often killed. According to Turpentine Creek Wildlife Refuge, 29/30 tiger cubs are euthanized because of breeding deformities which affect the profitability of the animals and 80% of tigers born due to inbreeding die because of their deformities.

Here are some additional resources to learn about the exploitation of white tigers: 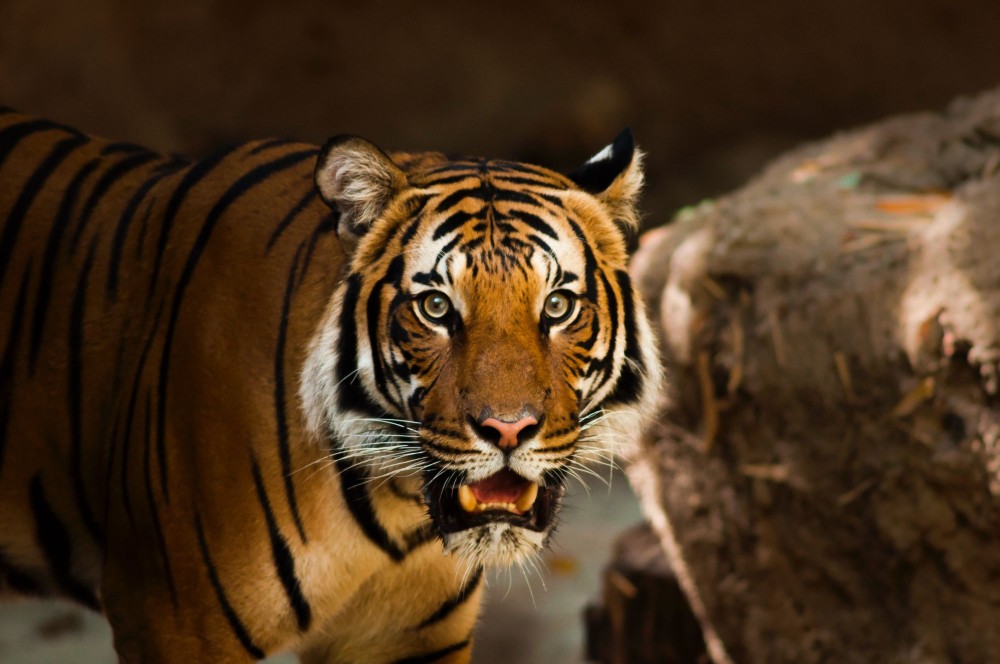 Not only does Tiger King portray a known abuser of animals in a crazy-yet glorified light, but it also misses the difference between legitimate sanctuaries and zoos.

Businesses like Thailand’s Tiger Temple and others that profit from exhibiting cubs for photo opportunities can legally call themselves sanctuaries or rescues even though they often engage in ongoing cycles of breeding and selling cubs once they are approximately 12 weeks old.

Legitimate sanctuaries do not breed their animals because they want to end the cycle of life in captivity. Tigers born in captivity are not good candidates for releasing into the wild for several reasons such as the inability to survive (predation is taught by their mother and the cubs are taken away before these skills are passed on).  Captive tigers can also transfer illnesses to wild populations (and vice versa).

Legitimate sanctuaries also do not allow direct contact with wild animals. Unlike being passed from person to person at Greater Wynnewood, sanctuaries do not allow visitors to directly touch, feed, or generally interact with tigers. This is not only for the animals’ safety but for tourists as well.

There are legitimate big cat sanctuaries such as Turpentine Creek that rescue several wild cats. It’s important to always research the facility before planning a visit to make sure it is one that takes the welfare of the animals seriously and has their best interest in mind.

Below are some resources that show how different the experience is at a sanctuary:

4. Violations of Minimum Standards of Care 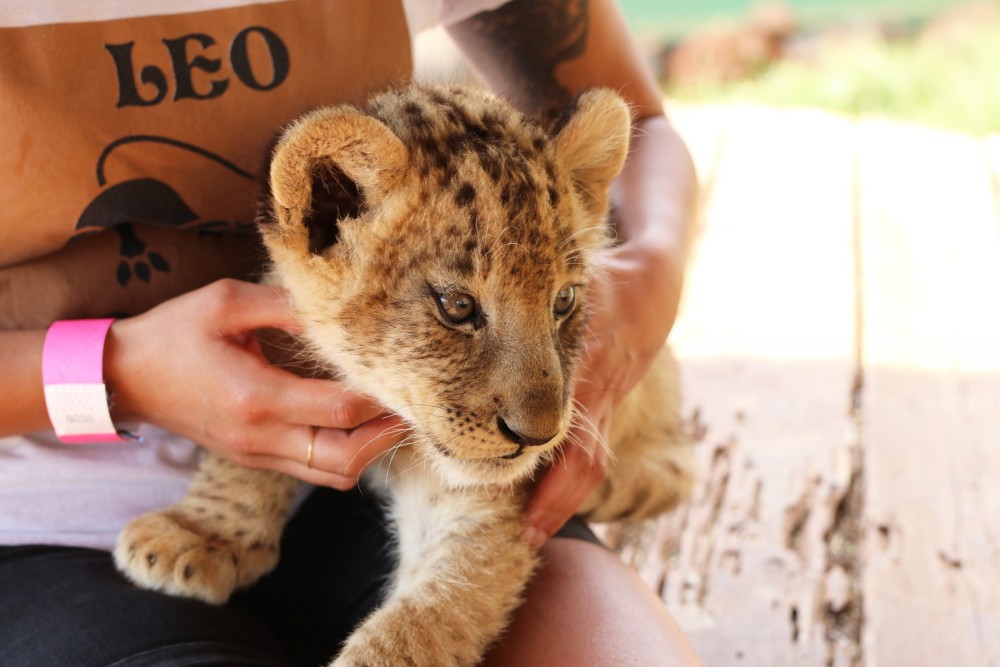 While briefly touched upon during the segment on mismanaged funds, poor animal care by Joe Exotic and others in the film is so serious, it has been documented by the United States Department of Agriculture (USDA).

The USDA’s Animal and Plant Health Inspection Service is tasked to enforce the 1966 Animal Welfare Act, which sets forth the minimum acceptable standards of care for animals used in research, exhibition, transport, and by dealers. To this date, it is the only federal law that enforces these basic care standards.

Joe Exotic had been frequently cited by the USDA for failing to comply with the Animal Welfare Act. These include failure to maintain enclosures, improper barriers to protect the public,  improper labeling and disposing of expired medications which could result in animal harm, and failure to provide adequate veterinary care.

In 2010, the USDA opened an investigation into the venue after 23 tiger cubs died during a seven-month period. Several investigations by animal welfare nonprofits throughout the years found animals sick, declawed, hit, kicked, and forced to live with incompatible cage mates resulting in gruesome attacks of one big cat on another.

Not only were animals able to—and did—escape enclosures on his property, but multiple citations by the USDA noted that animals were not provided with adequate vet care. For example, two white tiger cubs were found to have ringworm-like issues that needed to be addressed for public safety in 2016. But most shocking is that the USDA cited Doc Antle multiple times for failing to have a “responsible adult” available to conduct the government’s investigations of his venues.

Here are some articles that show first hand how tigers are exploited and abused for entertainment: 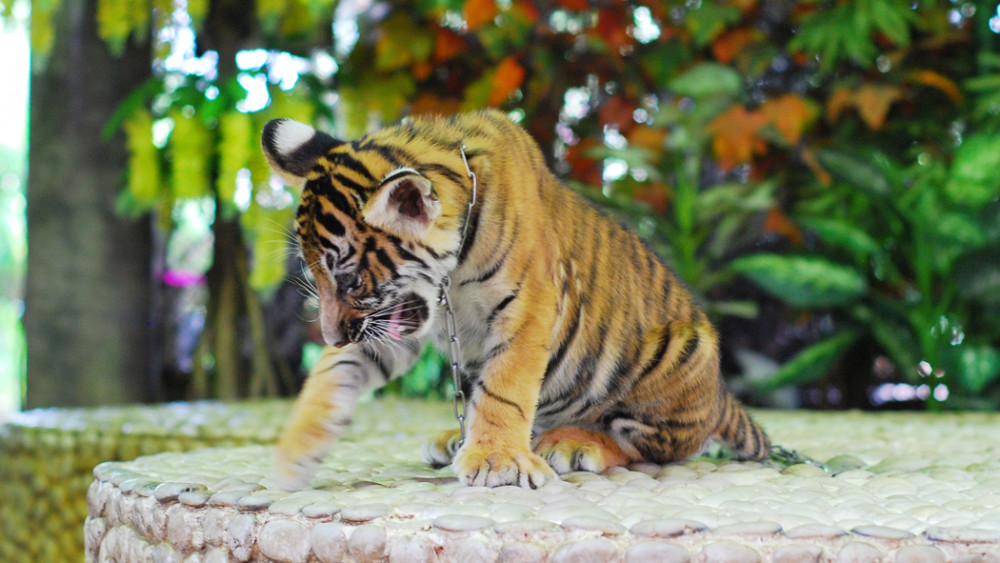 Jeff Lowe, who took over Joe Exotic’s animal park and is a major part of the Tiger King docuseries, was arrested in 2018 after illegally parading baby tigers throughout Vegas on his “Jungle Bus” for profits.

He was forced to turn over a tiger, lemur, and a liliger—a crossbreed of a tiger and lion—and fined $10,000 to pay for their care. The tiger and liliger cubs were found to be underweight and had health issues such as severe diarrhea, urinary tract infections, Giardia, and pancreatic conditions requiring lifelong treatment.

Lowe’s arrest was briefly documented in Tiger King, where videos of tigers being forced into suitcases and hotel rooms for selfies can be seen. 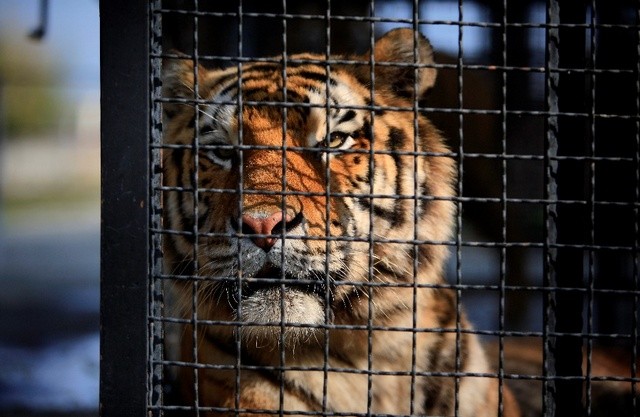 Today, there are more tigers living in captivity in the United States than there are in the wild.

Shockingly, while there is some federal oversight on the transportation of wild animals across state lines and the national border, there are no federal requirements for the private ownership of big cats. In fact, household dogs and cats are more heavily regulated than big cats. Without stronger regulations and enforcement, the big cat breeding and exhibition industry will continue to grow, allowing the abuse of big cats to continue. The Big Cat Public Safety Act would help end this cruelty.

The legislation is still pending in Congress, but together, we can end the use of big cats for entertainment.

Whether it is swimming with dolphins, petting a tiger, snake charmers or dancing bears there is a tremendous amount of torture and suffering (starvation, drugs, beating, bullhooks, whips, tight collars, muzzles, electric prods etc) these beautiful species have to go through to be forced to interact with us. ⁣⁣⁣⁣⁣