EXPOSED! Tiger Temple Thailand: a Must for Tourists OR a Front for Flagrant Animal Abuse? 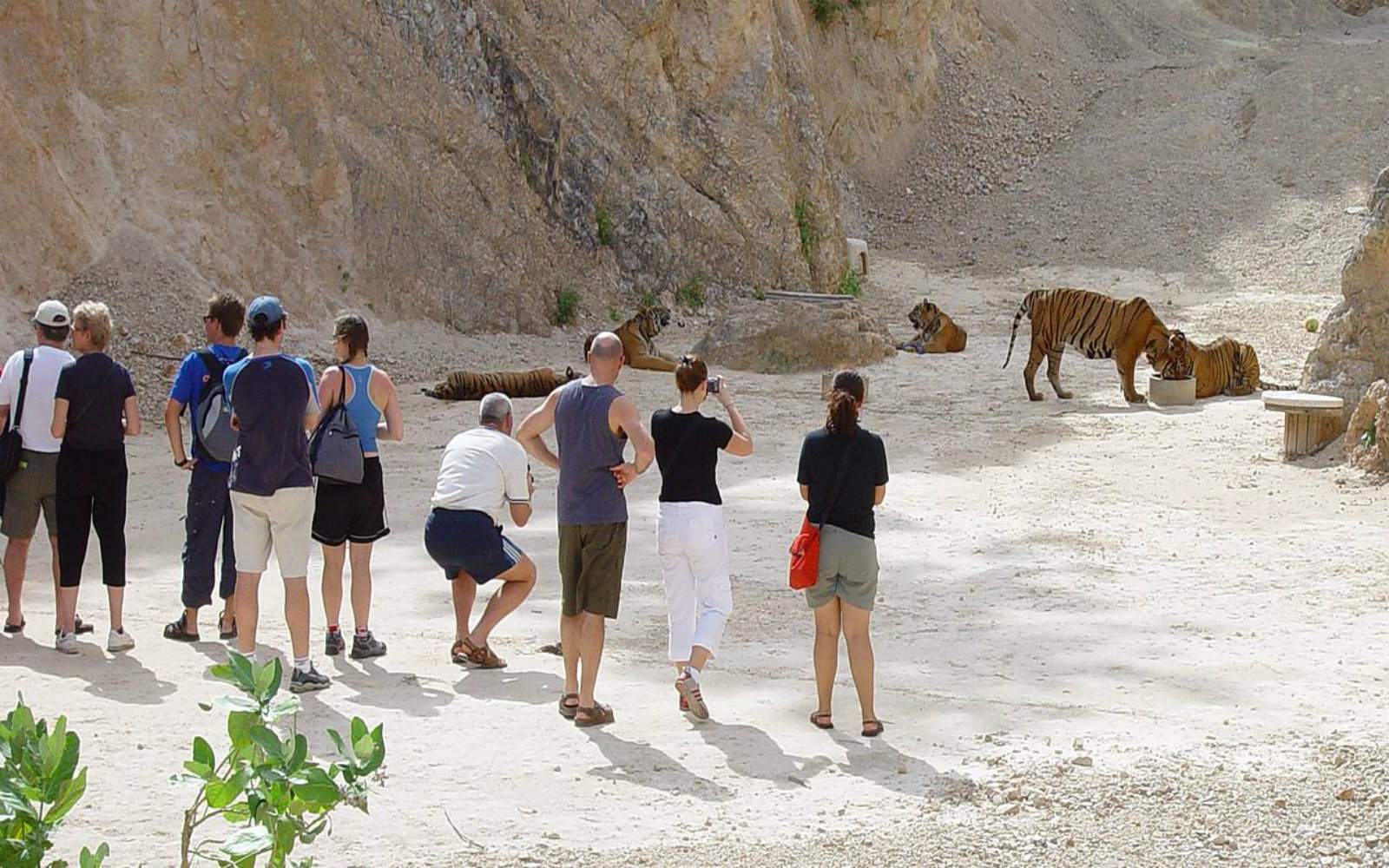 Every year, hundreds of foreign tourists flock for the chance to view and interact with tigers at the Tiger Temple Thailand. Here, visitors are given the once in a lifetime opportunity to frolic with tiger cubs and pose alongside larger cats. Guests can also help feed cubs and exercise the lazier adults … something you rarely get to do in the United States! Maybe there’s a reason for that … when you understand the fact that tigers are endangered and that holding them in captivity can cause them to become distressed and aggressive,  it seems like big cats don’t make for the best candidates for hands on entertainment.

But the Tiger Temple claims they’re helping tigers! According to the Temple, they support tiger conservation by rescuing tigers from poachers and allowing them to live peacefully alongside monks!

The Tiger Temple Thailand also takes part in its own breeding program and is technically licensed as a zoological facility. Stop right there. Let’s get one thing straight. Both these things means that Tiger Temple cannot be recognized as either a conservation NGO or a sanctuary. While the Tiger Temple may make their claims, about “rescuing” tigers or “supporting” conservation, we have to wonder if these claims are at all true. While the park does bill its charges to patrons as donations (according to Right Tourism), but there is no evidence suggesting those donations go in any way towards wild tiger conservation efforts.

Also, the fact that these tigers are raised by monks, not wildlife experts or conservationists, seems a little bit suspect. Like all wild animals, tigers require highly specific living conditions and diet. Not to mention an in-depth understanding of tiger behaviors is key to keeping guests safe. What are these monks doing that other wildlife experts aren’t to make these particular tigers so docile and friendly around guests …?

Although we know that these animals would (sadly) never stand a chance in the wild, we have to ask you a question: just because a group of wild animals can’t be released back into the wild, does that mean we have the right to treat them as we please while they’re in captivity? Learn more about what goes on at Tiger Temple, and you can be the judge.

Where do the animals come from?

In the 1990s, the trade of tigers was banned worldwide, but unfortunately this ban didn’t stick. Today, tigers and other big cats have become big in the trade of illegal wildlife. With their cute faces and fluffy fur, who wouldn’t want a little pet tiger cub?

Under Thai law, the exchange of tigers internationally is entirely prohibited, but after a series of investigations between 2005 and 2008 took place on the Tiger Temple, it was discovered that at least seven tigers vanished from the facility without any context, and five new tigers appeared – again –without explanation.

Evidence was later found that workers at the temple had coordinated deals with a tiger farm in Laos where older felines were traded for cubs. The cubs were then given the same names as their traded counterparts to hide the fact that tigers were being imported and exported between multiple facilities.

Another big rule in tiger-owning facilities is that, under the Thai Wild Animals Reservation and Protection Act of 1992, a facility must possess a government issued license in order to breed tigers. The Tiger Temple has not provided evidence of possessing such a license, yet they have successfully bred tigers resulting in 10 cubs. For those of us who know the intense struggles that tiger populations face in the wild, this may sound like a step in the right direction for tiger conservation. Unfortunately, this is not the case.

According to Care for the Wild, “To be part of a conservation breeding program, the genetic make-up and history of an animal’s parents must be known. But the original animals at the Temple are of unknown origin, nor have they been DNA-tested to identify their sub-species. With this background, the Temple cannot participate in any recognised conservation breeding programme.”

That being said, the animals bred at the facility are not viable for release as their species type is unknown. Without DNA tests, who is to say that these tigers are pure Indochinese or Bengal tigers (as is presumed) versus cross-breeds and hybrids?

Care for the Wild International carried out several Tiger Temple investigations between 2005 and 2008. After collecting data from each investigation, an entire report was created that states in the executive summary that the Tiger Temple Thailand’s “success is based around claims that its tigers were rescued from poachers and live and move freely and peacefully amongst the temple’s monks, who are actively engaged in conservation and rescue work.”

Despite these seemingly positive claims, it appears that Tiger Temple Thailand may have more to hide.

Back in 2013, a 19 year old college student was knocked to the ground and bitten by a large tiger while at the popular tourist attraction. With an infected four-inch gash in her thigh, the student needed to stay in a hospital for two weeks and was unable to walk independent of either a wheelchair or crutches for a month after the incident.

The question now becomes, what prompted the attack on the 19 year old student? Sure being in the vicinity of a predatory big cat is already prancing on the toes of danger, but what exactly pushes tigers to act this way in captivity?

According to CWI, tiger enclosures at Tiger Temple Thailand fell incredibly short of this standard with their cages only reaching 122 square feet. Furthermore, the CWI reports that the enclosures are, “totally free of any enrichment for the tigers. At any one time only around 10 tigers are out and about and the others are locked up in their concrete floored enclosures.”

Tigers spend between 20-21 hours in their cages a day. With this, there have been reports of tigers exhibiting signs of zoochosis (or repetitive behaviors exhibited by captive animals that appear to be under extreme stress), pacing constantly or obsessively chewing on their paws.

Tigers kept in captivity are supposed to have ample shade and water to escape heat. At the Tiger Temple, the cats are forced to interact with guests for about three hours at a time in direct sunlight. Temperatures where the facility resides can get to around 104 degrees Fahrenheit … a heat that makes even humans complain. 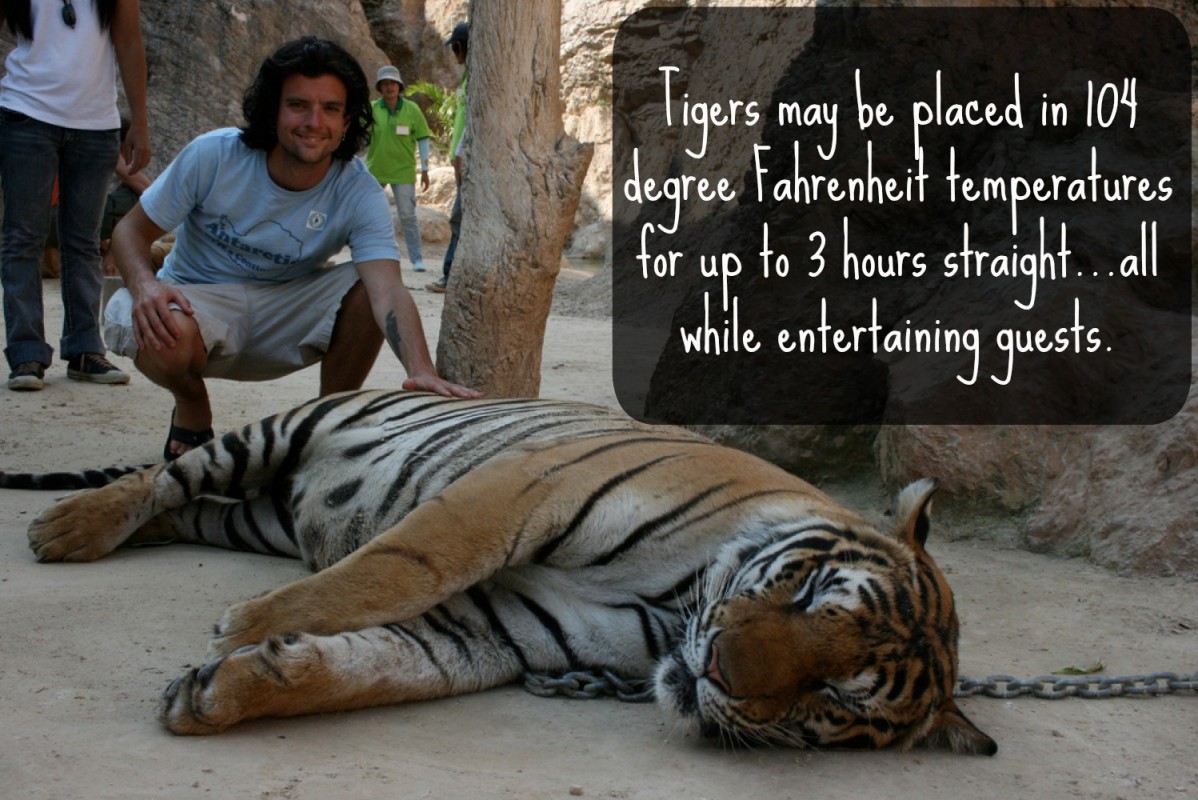 Temple workers have actually openly admitted to taking tiger cubs from their mothers at around three weeks of age.Young tigers become wholly dependent on human care in their early in life, deeming them completely unacceptable candidates for release into the wild.  At this young age, the tigers are taught how to “appropriately” interact with humans, and they start their “training.” CWI, as well as a number of tourists, have documented physical abuse and mistreatment of the tigers at the facility. To make the tigers cooperate with humans, they are beaten and taught to be submissive to their keepers.

Caretakers at Tiger Temple claim to have other plans for young tigers. According to a report by ABC news, one cub caretaker stated, “What [we] intend to do here is, once they’ve got the area to release them, we’ll move into a breeding program where the new cubs will be taught to look after themselves and from thereon they’ll teach the next generation to fend for themselves and be released.”

Though this notion is optimistic, it is entirely unrealistic. Sorry, Tiger Temple … it’s just not gonna fly. 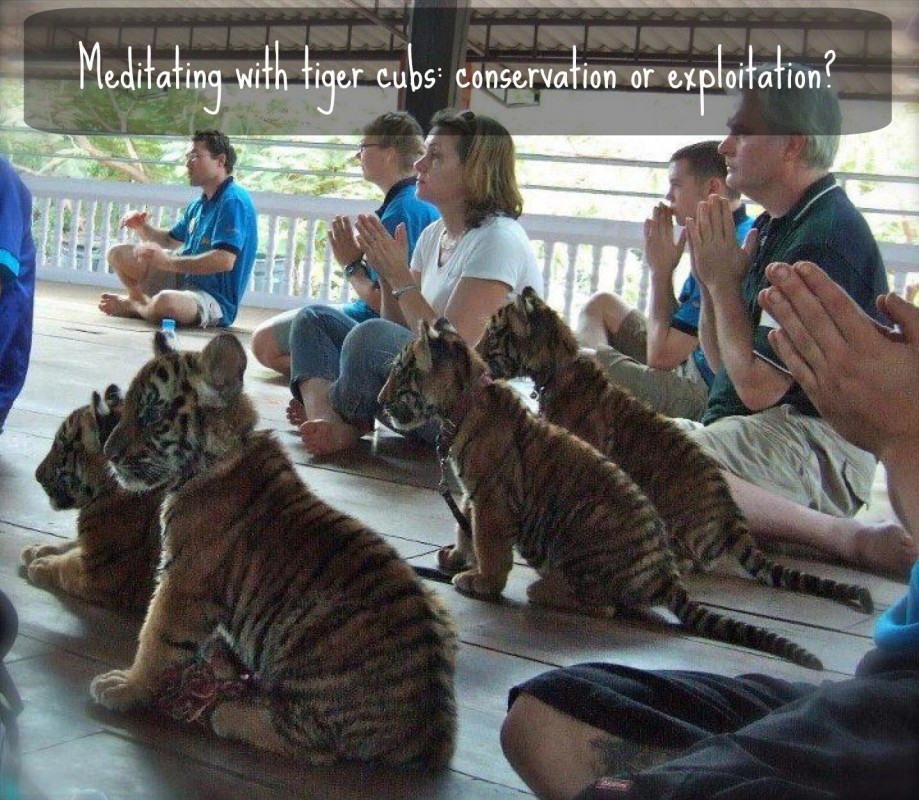 Socialization? For Once, It May Be a Bit Much

In the wild, adult tigers tend to live out solitary lives, only joining the company of another tiger when it’s time to mate or when cubs are too young to live on their own.

At Tiger Temple Thailand, felines interact with and live amongst multiple other tigers. Actually, “multiple” doesn’t even come close to describing the amount of tigers at this popular tourist stop. At one point, the facility housed 90 tigers at once … that’s definitely more than your average zoo.

Furthermore, tigers are also forced to interact with both workers and guests on a daily basis. There have been several claims made by tourists on tourism sites, as well as investigative reports. that workers roughly handle their animals by pulling on tiger’s tails and hitting them with thin canes. Tigers are also agitated by the tourists who think it is acceptable to sit on the animal’s backs or irritate the cats by getting too close when space is clearly needed. 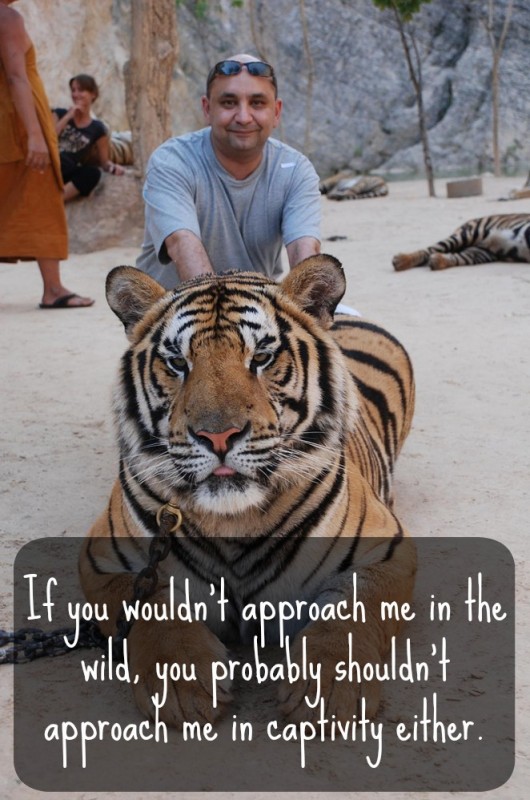 The CWI report states that the staff at the temple was “unprepared and ill-equipped to deal with potential emergencies” and that workers “failed to prevent direct contact even when the tigers [were] aggressive.”

While there have been rumors about Temple monks drugging the animals so that they act calmer near tourists, there is no evidence that this practice occurs. Still, tigers living at the facility are frequently noted as being oddly lethargic and calm. While drugs and medications may not be used, tigers may become submissive to workers after years of man-handling and physical abuse. One look at this video may have you thinking the same thing.

Based on what we know about the many claims and the we do not recommend this park to animal lovers. If you find no wrong in tiger selfies or watching monks pull on a tiger’s tail, that decision is entirely up to you. If you want to stop the activities at Tiger Temple, here’s what you can do.

Like any customer dependent facility, Tiger Temple Thailand is entirely dependent on their visitors in order to continue existing. For anyone who plans on traveling to Thailand, a good decision you can make is to simply cross this tourist trap off your list and go on another adventure.

To further boost public awareness about the Temple, leave a review on TripAdvisor. Follow this link (or this link … it’s up to you!), and write a review that either highlights your personal qualms with the park OR you can submit a link to this article. If you have visited the park and were less than impressed by the tiger’s conditions, please submit your images to add a visual touch.