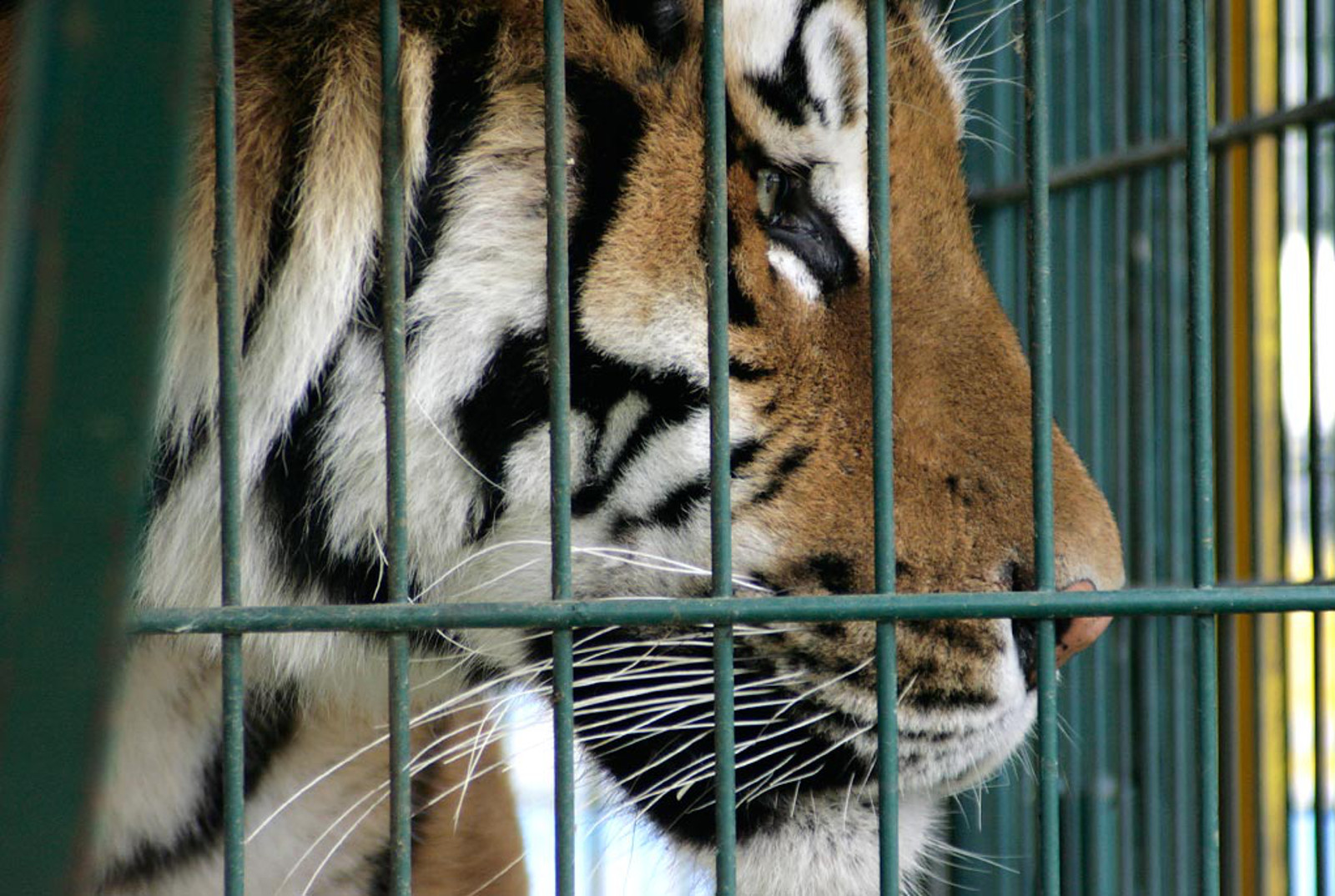 For young children, the circus is a magical place. For many individuals, it’s a place to see and experience wild animals first hand. Under the facade of harmless family entertainment, patrons are unaware of what it takes to coerce these animals into performing the elaborate tricks they see before them, and the level of abuse these animals endure when the circus tents come down.

Tigers are such a common staple in any big circus that most people do not realize that these big cats are highly endangered in the wild. In fact, there are currently more tigers in captivity in the U.S. than there are left in their native habitat. While some might think that keeping tigers in circuses is a good way to preserve the tiger population, this is hardly the case. First and foremost, circuses do not even attempt to replicate the tiger’s natural environment and do not have the space available to allow these cats to exhibit any of their wild behaviors. And any tigers that are bred in captivity to stock circuses can never be released into the wild. So really, circuses do very little to protect the tiger species and contribute terribly to their removal from the wild and exploitation.

The Life of a Circus Tiger

Some circus tigers come to life in captivity after being captured from the wild at a very young age. These animals are usually targeted by poachers and bought and sold into circuses, zoos and other sad fates through the illegal wildlife trade. Other tigers are born into captivity, these tigers are also typically removed from their mothers at an extremely young age. This allows trainers to “break” the tigers from a young age to make them complicit.

Circus tigers are often beaten or starved if they disobey their trainers. Broken down and anticipating punishment, tigers perform a number of uncomfortable and unnatural tricks to avoid this. What may seem like a willing participant to the audience is in reality nothing more than a terrified animal that has been beaten into submission and forced to perform. 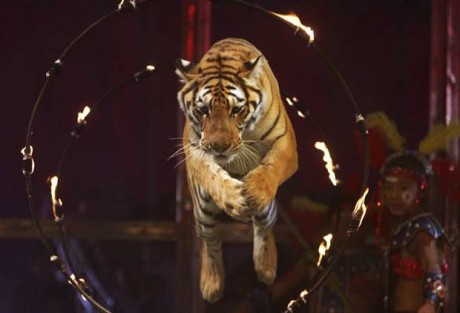 When the tigers aren’t performing, downtime entails life in a small cage. The average “beast wagon” size is four to five feet wide and eight feet long. The average tiger can be anywhere from four to ten feet long. Tigers eat, sleep and defecate in these small enclosures where they spend 90 percent of their time when not performing. 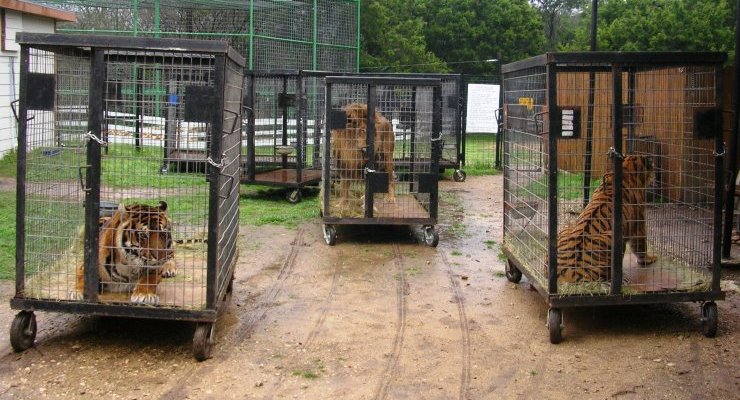 Being forced to live their lives in such restricted spaces has a profound physical and mental effect on the tigers that can trigger a number of unnatural behaviors like pacing, head-bobbing, and over-grooming. These abnormal and repetitive behaviors serve no purpose or goal and are done out of utter frustration.

In the wild, tigers usually have a territory that can span across 40 square miles. Although wild tigers are not free from harm, they’re at least able to live their lives in their natural environment free of cages or fences that prevent them back from exploring playing and hunting. Their natural habitat usually looks something like this: 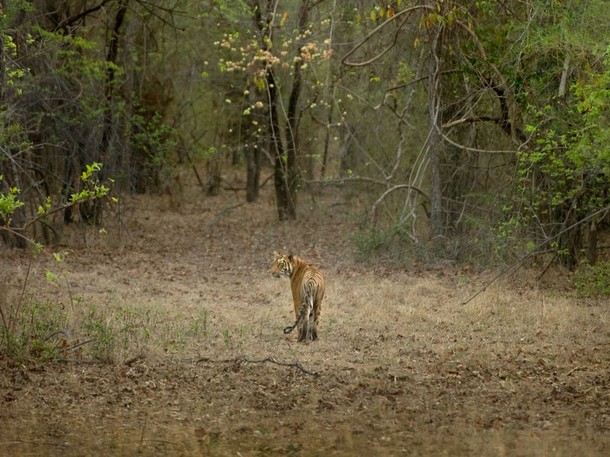 Wild tigers, like most wild animals, have complex behavioral needs. One of the most inherent behaviors is the need to hunt for their prey. Confining tigers to life in the circus inhibits many of these natural instincts, including hunting and stalking. These behaviors are primitive and fundamental to the welfare of the tiger. 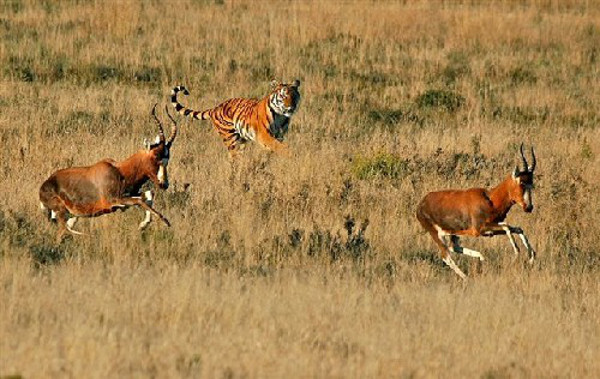 Contrary to what captivity supporters declare, these instincts never truly go away, the animal is never truly tamed, and no, they wouldn’t prefer you to hand them their food. Their instincts in captivity are simply suppressed using abusive methods; this lack of stimulation and enrichment causes circus tigers to become bored, prompting unnatural, zoochotic behaviors. It is estimated that around 60 percent of captive tigers pace obsessively. 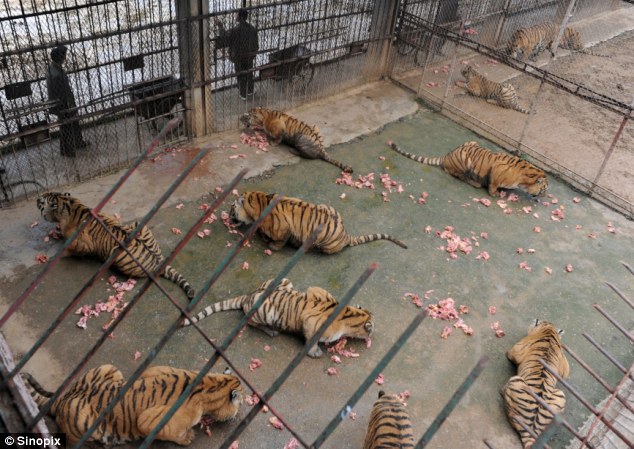 Interacting With Other Tigers

Tigers are often solitary animals, with the exception of mating season and when females reproduce and give birth to their cubs. For wild tigers, this is a choice. 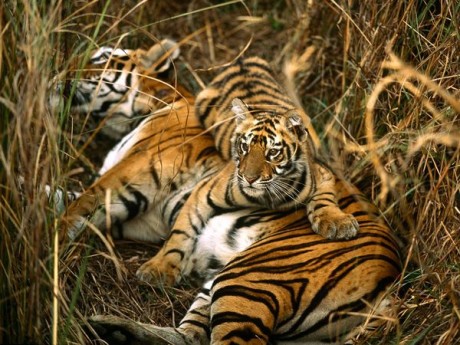 Circus tigers are forced to interact with one another during performances, often resulting in an unnatural level of aggression, particularly amongst males. Aside from aggression towards one another, we’ve all heard the horrific stories of tigers violently attacking and sometimes killing their trainers or patrons. According to a study published by Universities Federation for Animal Welfare, there are around nine fatal and 1.75 fatal interactions with circus tigers every year! 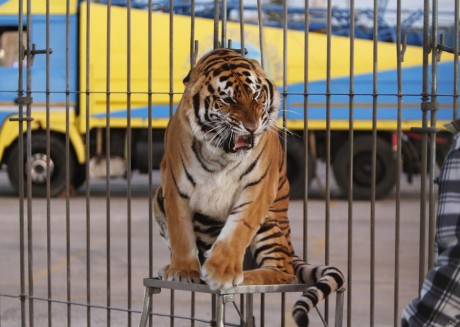 The current population of wild tigers is a mere few thousand individuals, devastating in comparison to only a hundred years ago when their numbers reached 100,000. With more tigers being held in captivity than in the wild, we as Green Monsters need to support the organizations working to protect these animals and commit to spreading the truth about life for captive circus tigers. More importantly, we all need to take action and boycott facilities that hold wild animals captive.

Share what you have learned about life for tigers in captivity and encourage others to stand up for these majestic creatures by refusing to pay for their abuse and exploitation. It is up to us to keep wild animals wild.