8 Dairy-Free Coffee Creamers on the Market You Must Try

When it comes to coffee, not all of us are like Special Agent Dale Cooper, who can lose himself in a cup of coffee that’s “black as midnight on a moonless night.” No, when it comes to that beverage that most of us can’t image starting our day without, we need a little bit of creamer to make coffee’s naturally bitter flavor a little more palatable. Even if you can handle black coffee, there’s just something about the flavor of a cup of freshly brewed coffee with a generous drizzle of rich, delicious creamer — it feels a little bit like you’re treating yourself.

In the past, if you avoided dairy, this typically meant that coffee creamer was out of the picture. But at the very least, you probably had a carton of plant-based milk in your fridge that you could use as a substitute. Luckily, times have changed — and there are plenty of companies out there that offer plant-based coffee creamer that’s just as good, if not better than the real thing. Even Coffee-Mate, a staple in 7-11s and households across the United States, now makes a plant-based alternative to coffee creamer!

So, grab a cup of your favorite brew, then try out one of these plant-based coffee creamers you need to try: 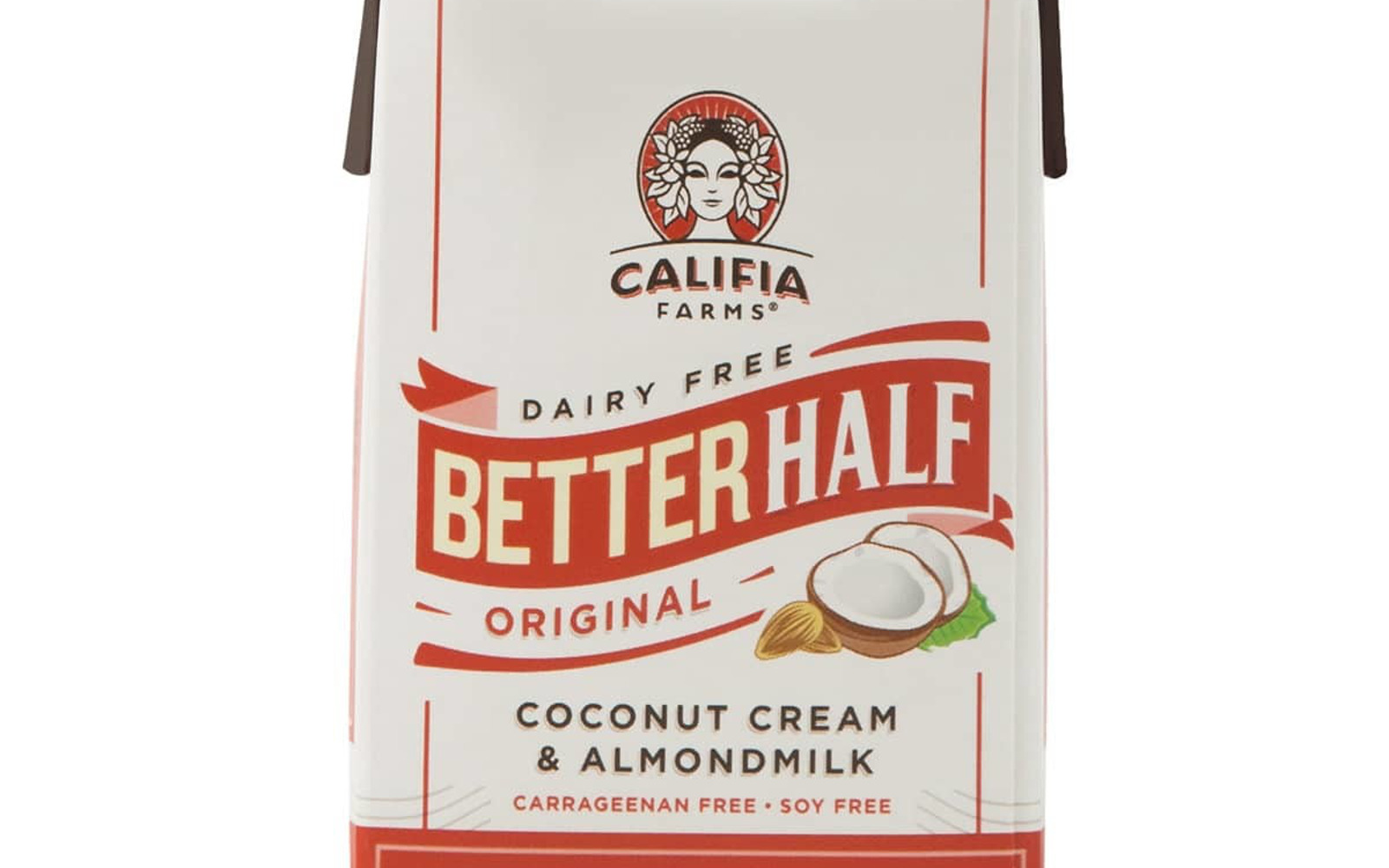 Do you love your coffee to be rich, creamy, and decadent? Then you might want to try this Califia Farms Better Half Coffee Creamer, one of the company’s newest products. Made from a blend of non-GMO almond milk and coconut cream, this dairy-free, soy-free, gluten-free, and carrageenan-free creamer acts as a substitute to traditional half-and-half. According to reviewer Danielle on the company website, “I recently found out I have a dairy allergy, and as a person who likes a little coffee in their creamer I’ve been struggling with finding a non-dairy creamer that is more creamy than sweet and has the right consistency… I’m so glad I finally found this stuff: creamy enough to pass for regular half-and-half, don’t have to use too much of it, not overly sweet and great flavor. Not too coco-nutty or almond-dy, just perfect flavor. I will be buying more!” If you’d like to try Califia’s newest coffee creamer, you can pick up a 16-ounce carton in Original or Unsweetened on Amazon for about $9. Or, check your local grocery store. 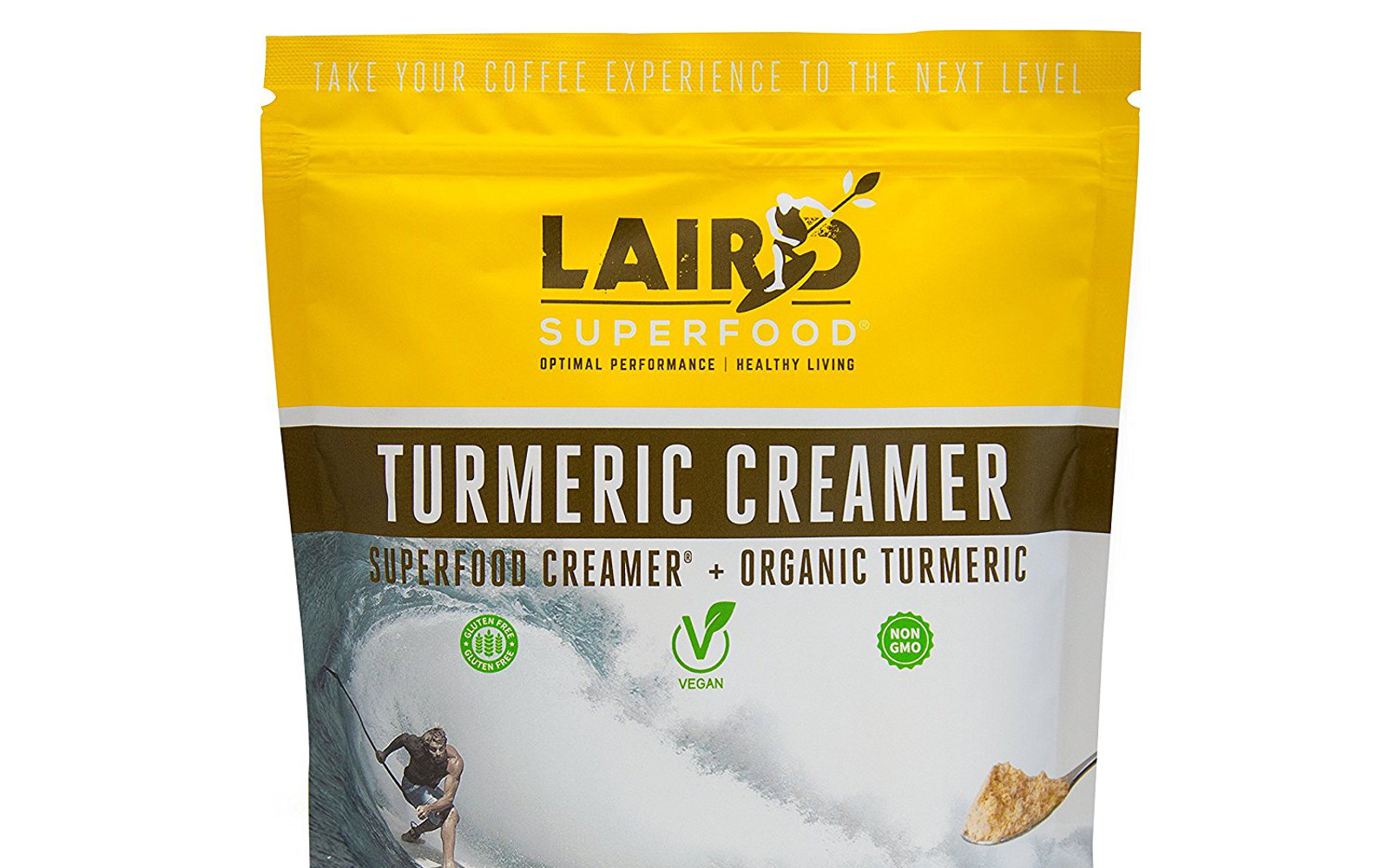 Love golden milk lattes, but don’t always have the time to make one? Try this soy-free, dairy-free, and non-GMO Laird Superfood Turmeric Creamer! Created by big-wave surfer and fitness guru Laird Hamilton, this dairy-free creamer combines coconut milk powder, turmeric and Aquamin (a mineral-rich calcified sea-algae) with nutrient-packed coconut oil and sustainably sourced red-palm oil. According to the company, the oils in this powdered creamer enable the body to absorb curcumin, an active ingredient in turmeric that is known for its anti-inflammatory properties. Amazon reviewer AM21, “I think the Turmeric Creamer is beautifully formulated and I use in my coffee daily now eliminating the organic milk I previously added. The flavor is quite good taking a time or two to adjust to and now I really adore the flavor and I’ve only gotten positive feedback from the ten or so people I have shared it with.” 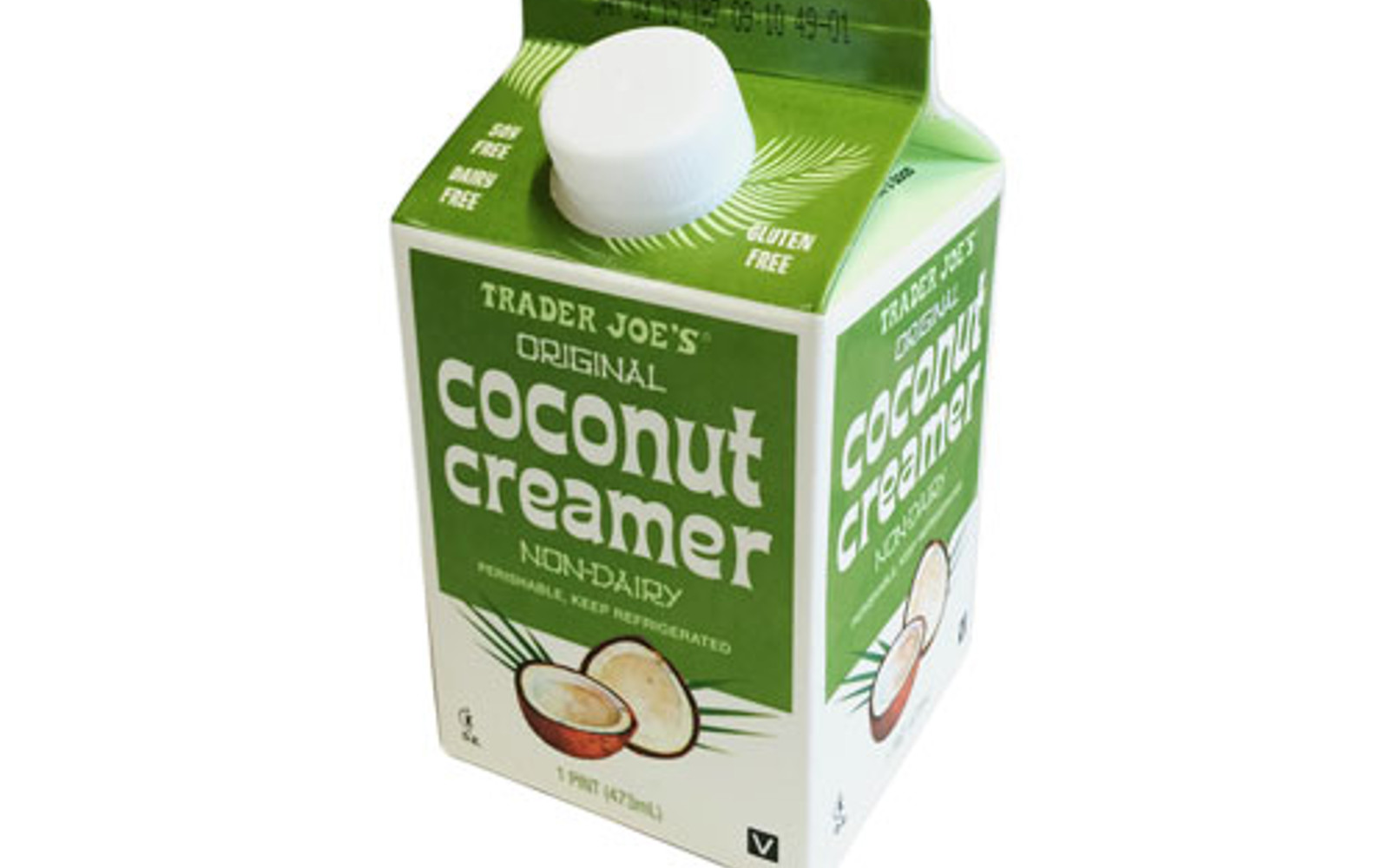 Did you know that Trader Joe’s makes its own plant-based coffee creamer? Made from organic coconut milk, Trader Joe’s touts their creamer as a great addition to coffee and tea as well as perfect for smoothies, cereal, and curry. According to reviewers on Influenster, this creamer “makes coffee taste like an unhealthy treat without all the added sugar and fat of a coffee store drink.” However, some were disappointed in the slightly watery texture and strong coconut flavor. According to Trader Joe’s, a 16-ounce carton retails for $1.49. Trader Joe’s also carries an organic Soy Milk Creamer, which retails for the same price. 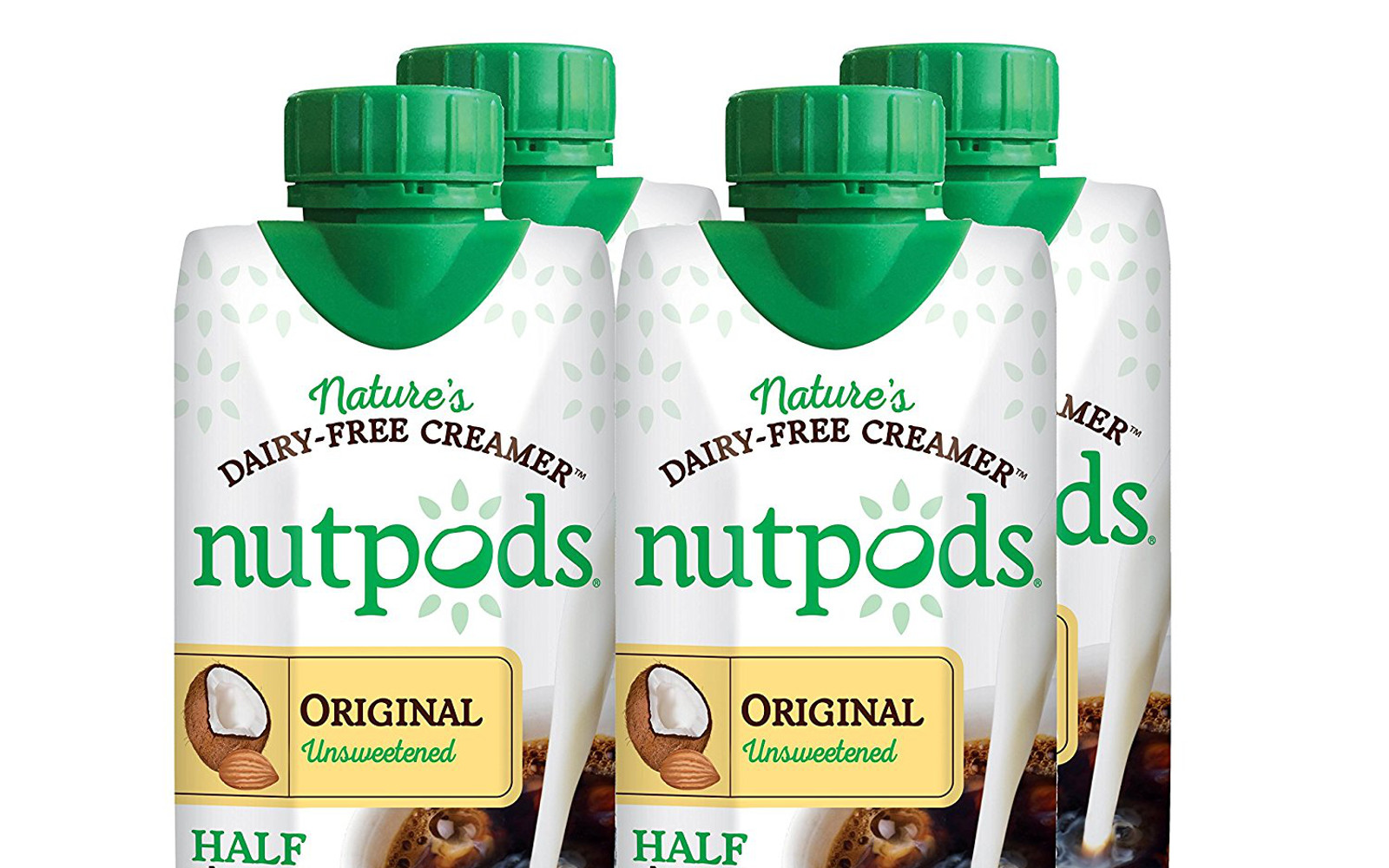 The company Nutpods was born out of founder Madeline Haydon’s personal search for a plant-based creamer that tasted like real cream without a long list of additives. She succeeded, because this nutpods Dairy-Free Creamer in Unsweetened is a creamer free from soy, carrageenan, and added sugars. On top of that, it is also gluten-free, Non-GMO Project Certified, paleo-friendly, and Whole30 approved! Not only can you pour it in your coffee, you can use it in any sweet or savory recipe that calls for cream. According to Amazon reviewer H. Williams, “This is a very good replacement for dairy half and half or light cream in your coffee, although it definitely isn’t exactly the same … My experience has been similar to others, although I don’t have as many issues with the separating — maybe once or twice, but I’m chalking that up to the coffee I used it in, rather than the product, because I’ve had the same container of nutpods behave differently depending on the beverage. Definitely be sure to shake it up before you use it. Also, do refrigerate it.”

If you’re interested in trying nutpods, you can pick up a four-pack in Original, Hazelnut, or French Vanilla on Amazon for about $15. 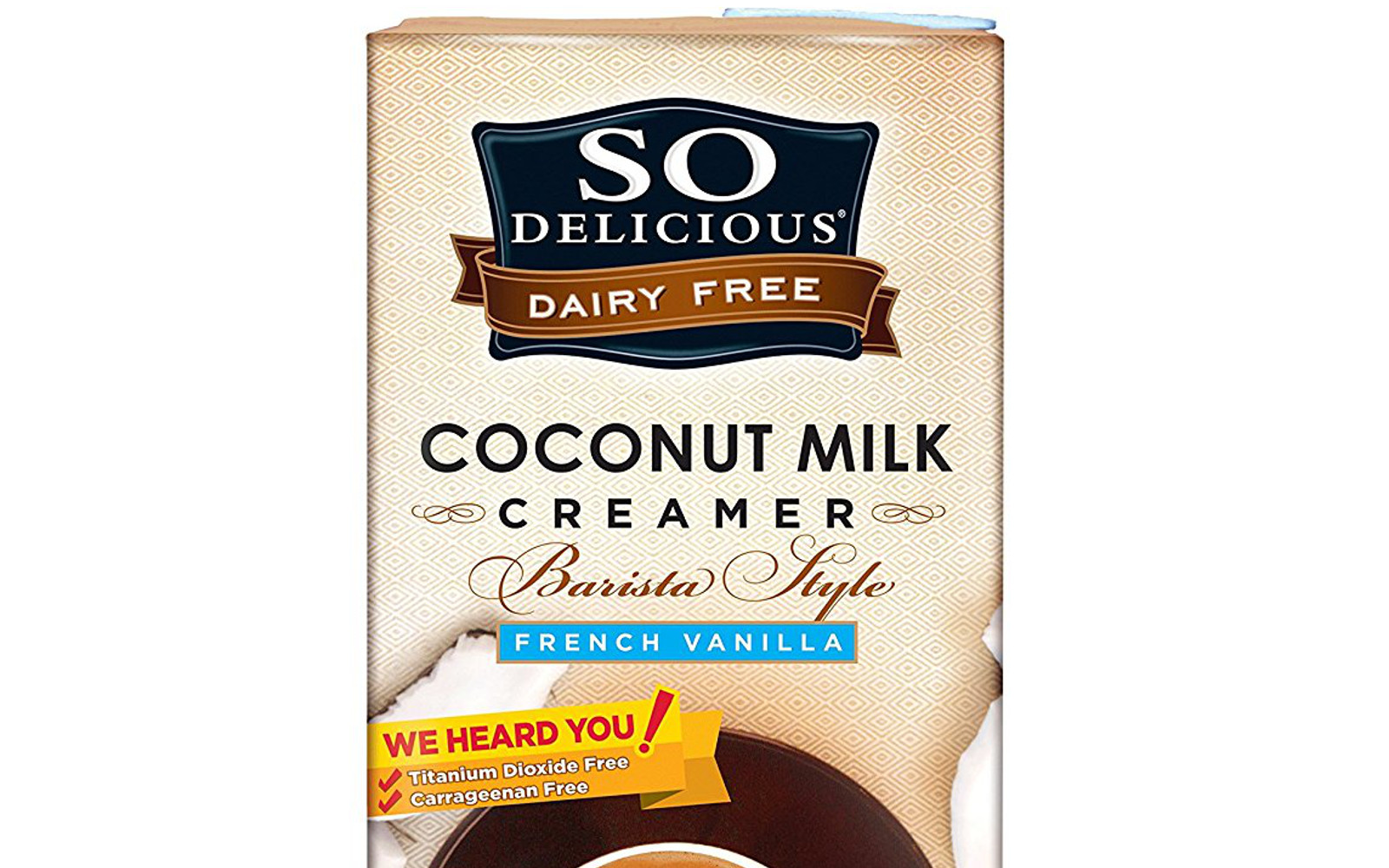 The company So Delicious has made a name for itself in the dairy-free world with its vegan versions of milks, yogurts, and ice cream. This So Delicious Barista Style Coconut Milk French Vanilla Creamer, for example, acts a shelf-stable replacement for both coffee traditional creamers and frothy milk in homemade lattes. Made from 100 percent organic coconuts, this creamer is soy-free, non-GMO, and free from additives like carrageenan and titanium dioxide. Reviewers found that this creamer, “be one of the better [dairy-free creamers] for frothing,” although some found it to be a little clumpy. If you’re a latte enthusiast, you can pick up a six-pack of 32-ounce creamers on Amazon for about $25. Or, check your local grocery store. 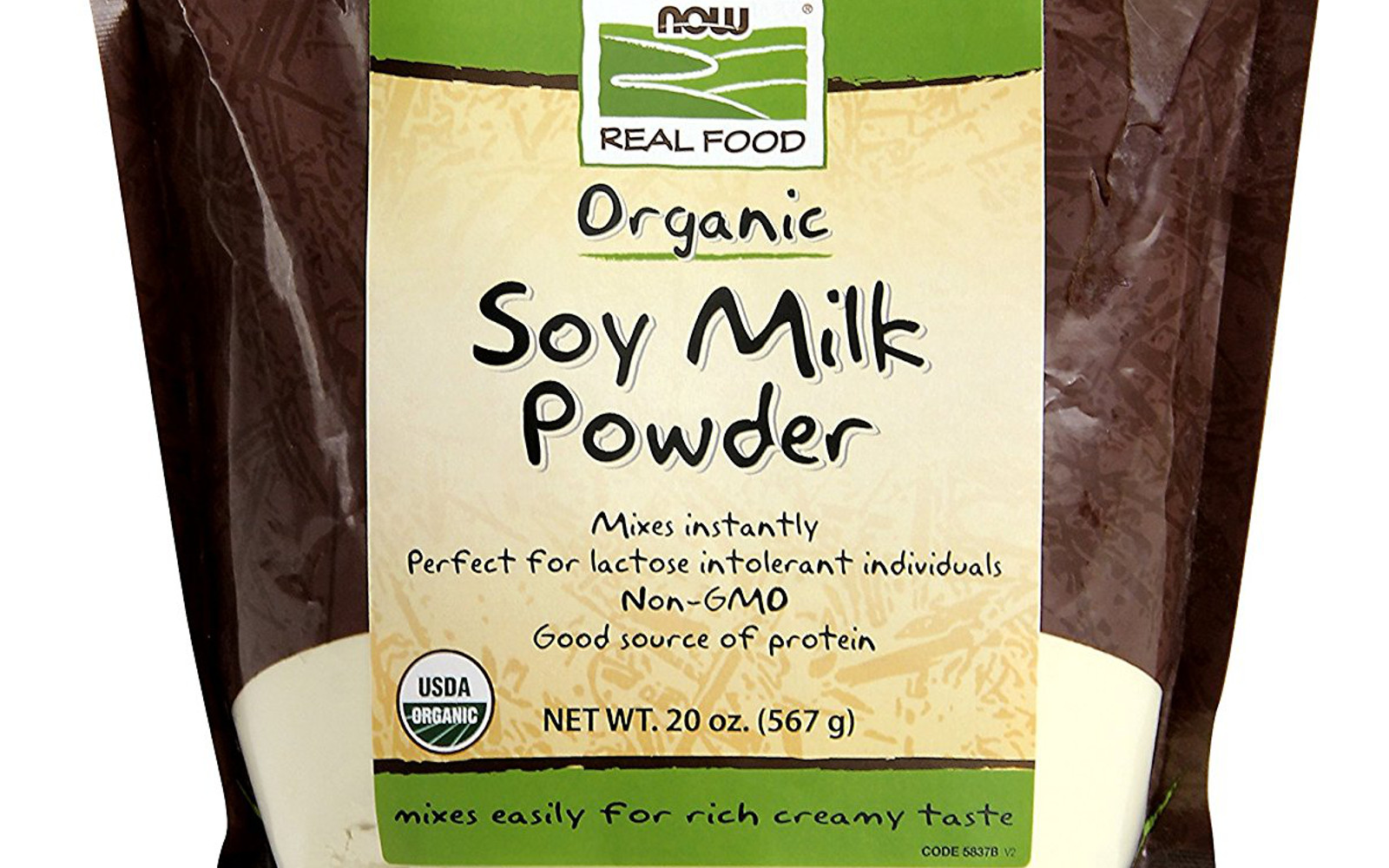 Need a creamer that you can take with you when you’re on-the-go? We don’t blame you. While most cafes now offer non-dairy options for your coffee, sometimes you’ll come across one that has only traditional milk. If that’s the case, this Now Foods Organic Soy Milk Powder has you covered. According to the company, this product is a “rich and creamy beverage mix that dissolves easily in water.” Although it’s intended to be a substitute for soy milk, several reviewers on Amazon use it as a creamer. According to reviewer Jenna S., “Seems a cost effective alternative given that it’s shelf-stable & will last. It also mixes quickly and it really tastes great! Has a nice creamy texture. I seriously may never buy regular soy milk again. Love that it’s non-GMO.” Reviewer lady with a cello says that “It’s easy to put enough into a zip bag and take it anywhere. I use it as creamer, and even made a white sauce substituting it for milk.”

If you’re interested in trying this powdered soy milk, you can purchase a 20-ounce bag on Amazon for about $12. 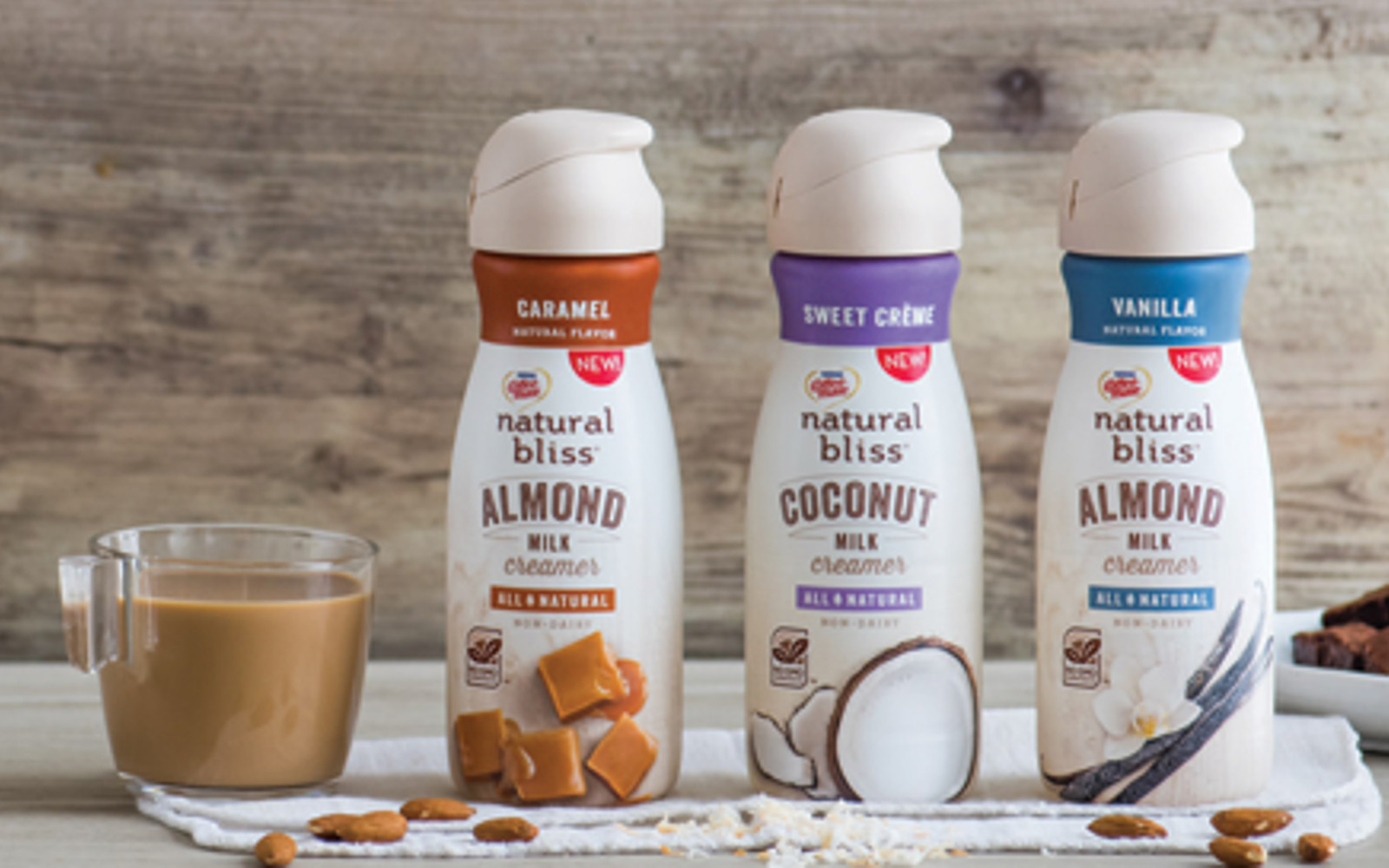 If Coffee-Mate wasn’t the ever-present coffee creamer in your parents’ fridge, chances are, you have friends or family that stock several bottles at a time. In terms of variety, Coffee-Mate has always been on top of offering multiple flavors of their signature coffee creamer. Earlier this year, the company announced that they were launching a line of plant-based coffee creamers under their Natural Bliss line, which uses minimal and non-GMO ingredients. They offer two varieties, almond milk and coconut milk, in flavors like Vanilla Almond Milk, Caramel Almond Milk, Hazelnut Almond Milk, and Sweet Créme Coconut Milk. You should be able to find find Coffee-Mate’s line of vegan creamers in most grocery stores. 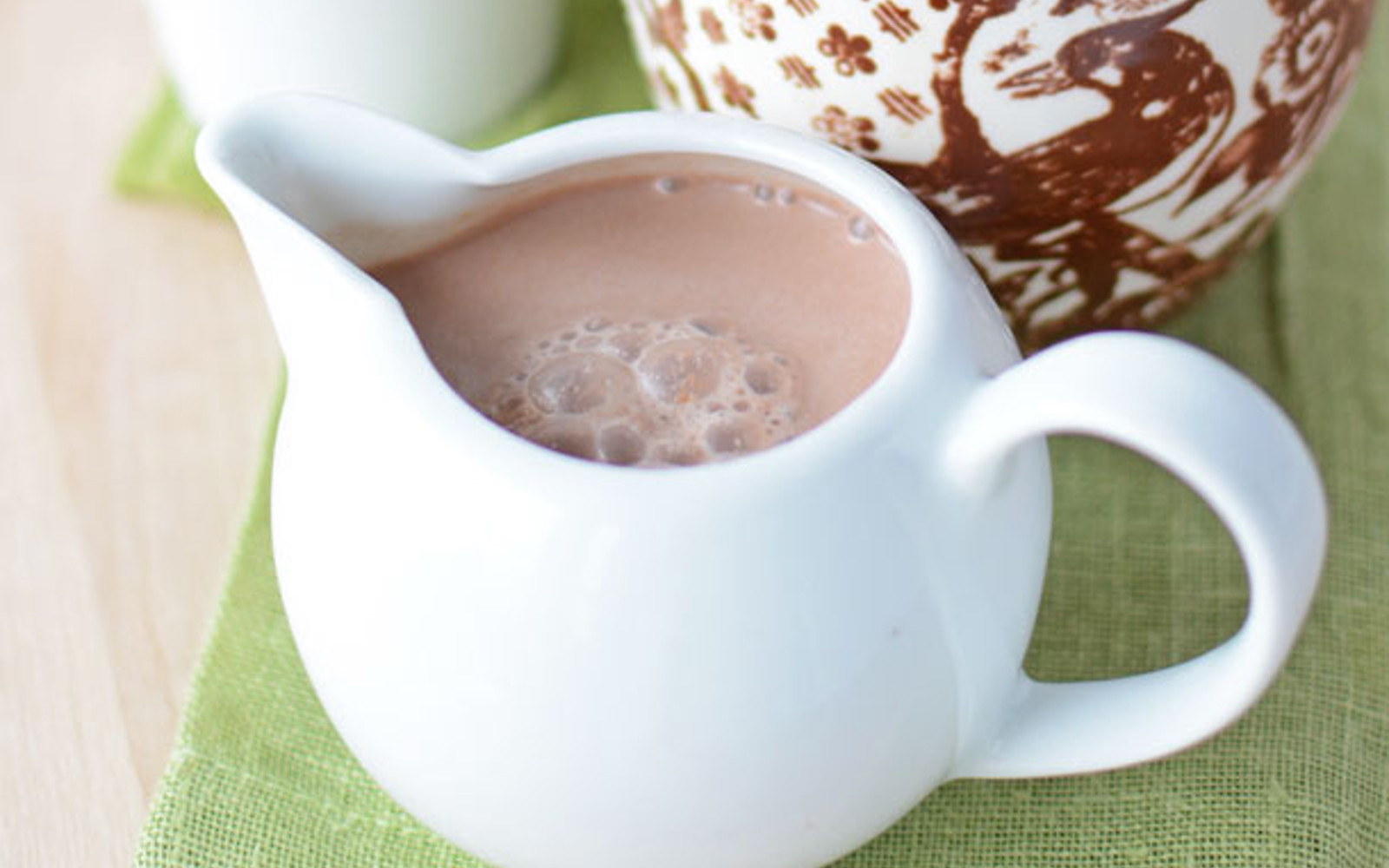 It’s great that we live at a time where finding plant-based options for coffee creamers is so easy. But, you can still try your had at making your own! This Mason Jar Irish Coffee Creamer, for example, combines creamy non-dairy milk with raw cane sugar, cocoa powder, almond extract, and vanilla extract. Or you can try this naturally-sweetened Vanilla Nut Coffee Creamer made from vanilla almond milk, raw cashews, and soft, gooey dates. You can find recipes like these, along with recipes for pantry staples, snacks, and every meal of the day, on the Food Monster App, a food app available for both Android and iPhone. Currently, the app contains 8,000+ vegan recipes with 10+ new recipes added daily.

You can find recipes like these, along with recipes for pantry staples, snacks, and every meal of the day, on the Food Monster App, available for both Android and iPhone. Currently, the app contains 8,000+ vegan recipes with cooking how-tos, articles, and 10+ new recipes added daily. The app makes plant-based cooking easier than ever by breaking down recipes into hundreds of categories according to ingredient, meal type, allergen, event, season, and more – not to mention, you won’t have to have your laptop or a cookbook on the counter while you’re cooking. Give it a try! go