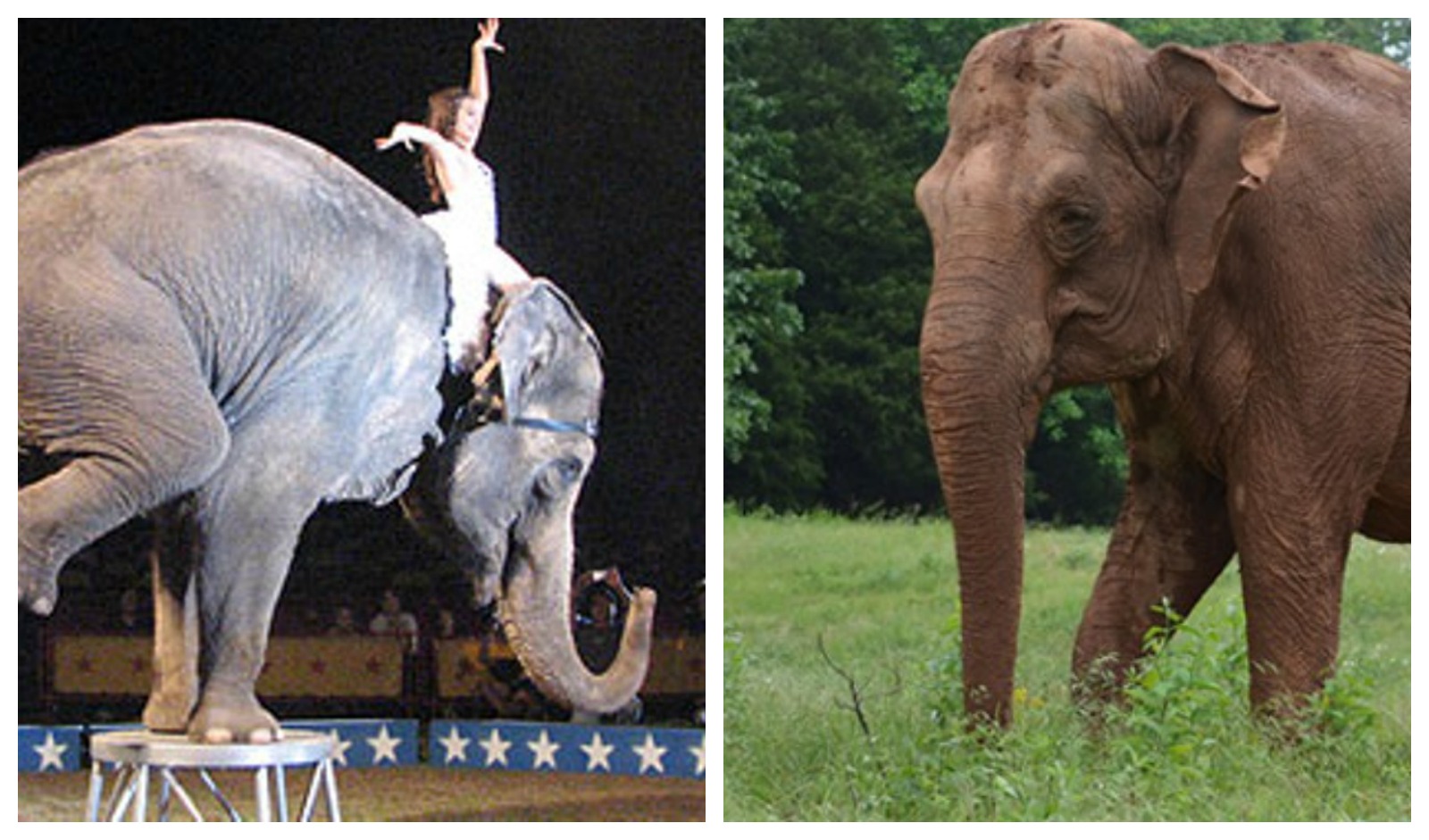 The allure of the circus lies in the ability of performers to trick the audience into believing what they are watching is extraordinary or in someway magical. Circus acts feature giant elephants performing handstands and ferocious lions and tigers bending to the every will of their trainers, and they create the illusion that what is happening on stage is something only possible in a dream. How these incredible performers are able to control these wild animals with such ease is a mystery that has long perplexed many-a-circus goer.

However, when you learn the secrets of how circuses really do it, it becomes readily apparent that everything you see on stage is a bold-faced lie. The only magic involved in circus acts is years of abuse and cruelty that has turned naturally magnificent wild animals into trained puppets who are motivated by hunger and fear. Circuses employ horrifying methods to get animals to perform tricks and the stress and physical demands of life in the circus often leads these animals to becoming both mentally and physically ill.

When animals are viewed as commodities to be exploited for profit, their well-being becomes of little concern. Luckily, there are many organizations working to retire circus animals and transport them to sanctuaries where they can live in peace and happiness. These animals are now free from life at the big top and their stories give us hope that one day all circus animals will be able to live free as well!

Shirley is an Asian elephant who was captured from the wild of Sumatra and sent into a life entertaining people. Before she was rescued by the Elephant Sanctuary in Tennessee, Shirley performed as a circus elephant for 24 long years with Carson and Barnes Circus. Shirley traveled and performed with this circus until she was attacked by another elephant and broke her back right leg. No longer able to perform tricks, she was sent to Louisiana Purchase Gardens zoo where she lived alone due to safety concerns associated with her leg injury. Shirley spent 22 years living alone, this is an incredibly miserable existence for elephants who are highly social and emotional beings. It would be like keeping a person in a display case. But thankfully, Shirley was retired to the Elephant Sanctuary in 1999 where she finally got to rejoin a herd of other elephants. Shirley now spends her days chatting with her elephant friends and enjoy apples, her favorite food.

The Elephant Sanctuary in Tennessee

Zabu and Cameron are a bit of an odd couple. This white tiger and lion were born into the same roadside zoo/circus.  Circuses often put white tigers on display because they add an exotic flare to an already over the top spectacle. Many people do not realize that white tigers do not naturally occur in nature, but their white fur is the result of a genetic mutation that can only be replicated through inbreeding.

Thankfully, both Cameron and Zabu were rescued by Big Cat Rescue and rather than being put on display all day, the pair get to romp around the sanctuary grounds and play together.

This small pride of lions was rescued from a circus in Bolivia in 2010 thanks to the help of Animal Defenders International (ADI). ADI had run a series of undercover investigations exposing the cruelty endured by animals in the circus and shortly thereafter, the Bolivian government banned animal circuses in 2009. Although circus acts had been banned, Simba, Bambek, Daktari and Camba were still living small cages, fed outdated meat and carried around on the back of their owners truck. To end this horrible existence, ADI collaborated with Performance Animal Welfare Society and the four lions were moved to the ARK2000 sanctuary.

Prince the Asian elephant was born into captivity in the Portland Zoo. After being born into a zoo, Prince began life as part of the Ringling Brothers and Barnam and Bailey circus. Ringling is known for the brutal methods they use to train their animals, which include utilizing bull hooks and electric prods to get animals to perform. In the past 20 years, over 30 elephants have died in the care of Ringling Brothers. Prince was lucky enough to escape the circus with his life and was voluntarily retired to PAWS by Feld Entertainment, the parent company of Ringling Brothers. This happy elephant now gets to spend his days playing in his pool at the ARK 2000 sanctuary. Just check him out.