EXPOSED! Thailand’s Tiger Kingdom Is No Sanctuary for Animals

The draw of getting to see a live tiger up close and person is easily understood. There is nothing more beautiful than the sight of these gorgeous big cats in the wild. While we may love our house cats, there is something about how exotic and different their much larger, wild counterparts are that entices us to want to see them for ourselves. But of course, going about seeing a tiger in the wild is more complicated than one might think. Firstly, tigers are highly endangered and only a few thousand exist in their native habitats. And secondly, tigers are incredibly dangerous. If you were to stop and consider the size and power of their teeth and claws you would certainly rethink approaching one in the wild.

But, when in captivity, the game changes entirely. More than seeing a tiger in a zoo or the circus, getting to see a tiger at a designated tourist attraction that actually allows you to interact with tigers seems like the ideal option. Take for example, the Tiger Kingdom franchise in Thailand. Boasting three facilities, these parks not only allow you to view tigers, you can pet them, hug them, and even pose for photos with them! The popularity of tourist attractions like Tiger Kingdom has exploded across the world, while they might seem like an amazing pit stop to make on your holiday adventure, but as a Green Monster, you might want to rethink your support of these types of facilities. As with most of these money-making facilities, Tiger Kingdom is focused on turning a profit, and not focusing on the best interests of the tigers.

So, without further ado let’s take a look into Tiger Kingdom.

Tiger Kingdom has two branches in Chiang Mai and one in Phuket. According to report in The Phuket News, “The rather Disney-fied story of Thailand’s Tiger Kingdom began in the early eighties.”

As the legend goes, the owner of Thailand’s Tiger Kingdom was given a tiger cub nearly 30 years ago because its mother had been killed. The villager who found the cub gave this particular man the tiger cub because he had the land and money necessary to care for the cub. Naturally, as he acquired more animals, he needed to make more money to support them and thus the idea for Tiger Kingdom was born. The land where the initial “rescue center” was founded is not a zoo. In 2008, Chiang Mai’s Tiger Kingdom was opened. Originally, the facility was run like a standard zoo but as time went on, visitors were allowed to interact with the tigers. In fact, a group of Australian tourists is credited with starting this practice after asking if they could get close to the animals like their trainers did.

Perhaps this sparked the beginning of a new and inventive way to “make more money” for the tigers at the facility. Now guests who attend the facility are charged $15 USD per tiger they would like to interact with, there is a choice of tiger ranging from cub to adult. Thai tiger tourism has trended towards the interactive experience in recent years and as the result it is raising some suspicion in the animals welfare world. After all, how is it that these specific tigers are so docile and willing to sit quietly while guest tug at their tails and snap thousands of photos with them? While Tiger Kingdom would maintain that the gentle nature of these tigers comes from their being hand-reared by humans … there seems to be more to the story. 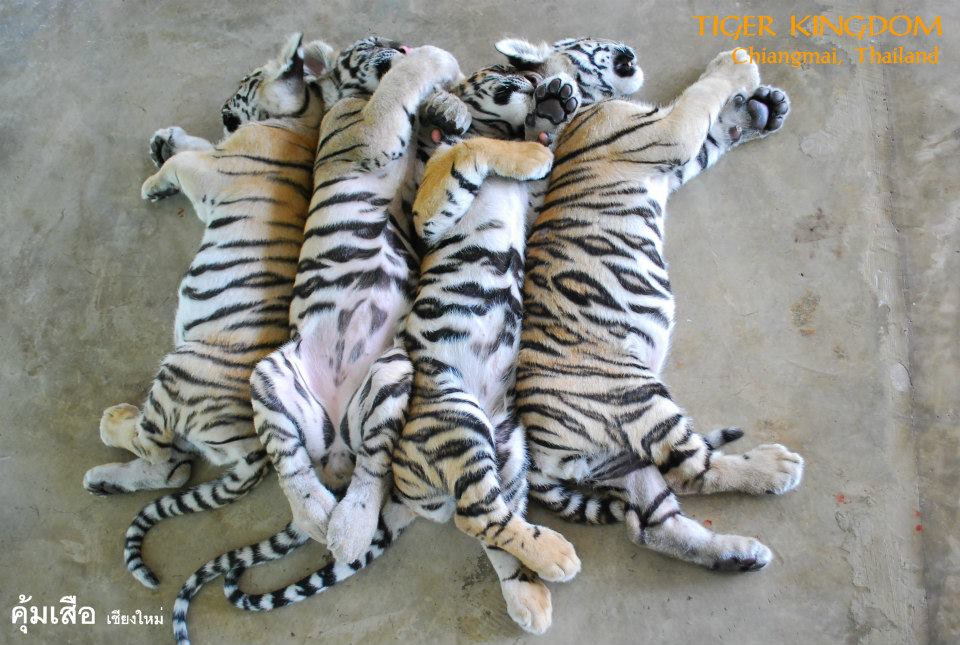 Tiger Kingdom runs a breeding program, which operates under the guise of being part of their “conservation” efforts. However, after being hand-reared these tigers can never be released into the wild, raising the question as to what the funds generated by the facility are actually going towards. Hand-reared is essentially a euphemism for saying that cubs are taken from their mothers at a young age and raised by humans instead. Doing so makes tigers completely reliant on humans for food and care, rendering them virtually unable to fend for themselves in the wild.

At around the age of two years old, the tigers are separated into a different living area, away from their younger counterparts. According to the chief customer relations officer, Pim, for the Chiang Mai branch of Tiger Kingdom, the tigers need to be separated at this age because otherwise they would be inclined to fight with one another. They wouldn’t want to encourage these animals to be wild or aggressive after all … The adolescent tigers are kept in their cages all day except when they are taken out for photos. The adult tigers are to be kept isolated in a cage, 24 hours a day – unless they are taken out for photos.

Ashley Freno, a senior campaigner for PETA Asia explains, “Most tigers in attractions like these live out their life sentence in prison-like cages, leaving these majestic and powerful creatures without any space to move and run in and trainers are always on hand, complete with bamboo sticks, to moderate tigers’ behavior if they get too ‘wild’.” 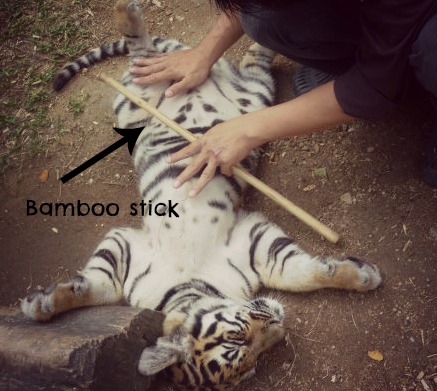 In an interview, the head tiger trainer at Tiger Kingdom, Chiang Mai, told the reporter, “Each trainer is given a small bamboo stick which is used to control the tiger. If they behave badly they will be drubbed on the nose. This is how they are trained when they are very young. The stick is only used for bad behavior, but they are retrained every morning before the tourists come in.”

While documentation of abuse at Tiger Kingdom has not come to light, the training methods of tigers at other such facility have been revealed for their cruelty. An investigation into Tiger Temple, also in Thailand, found that tigers were often beaten and deprived of food and water to reinforce the dominance of their trainers. If these cats need to be systematically separated and sentenced to a solitary life to keep them “domestic” then clearly it is not in the tiger’s nature to be calm and docile around human guests. 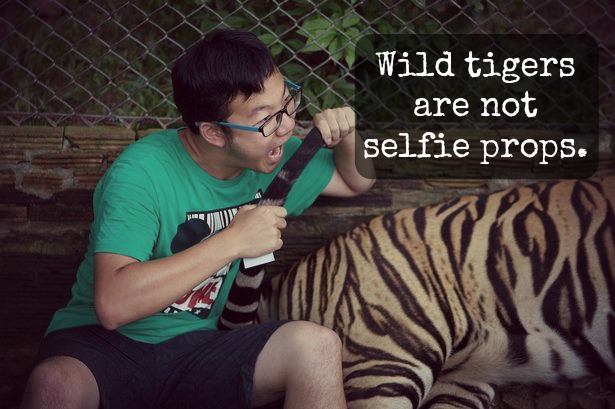 The only other alternative to living out their days in solitary confinement for these tigers is to become part of the breeding program and perpetuate this cruel cycle. 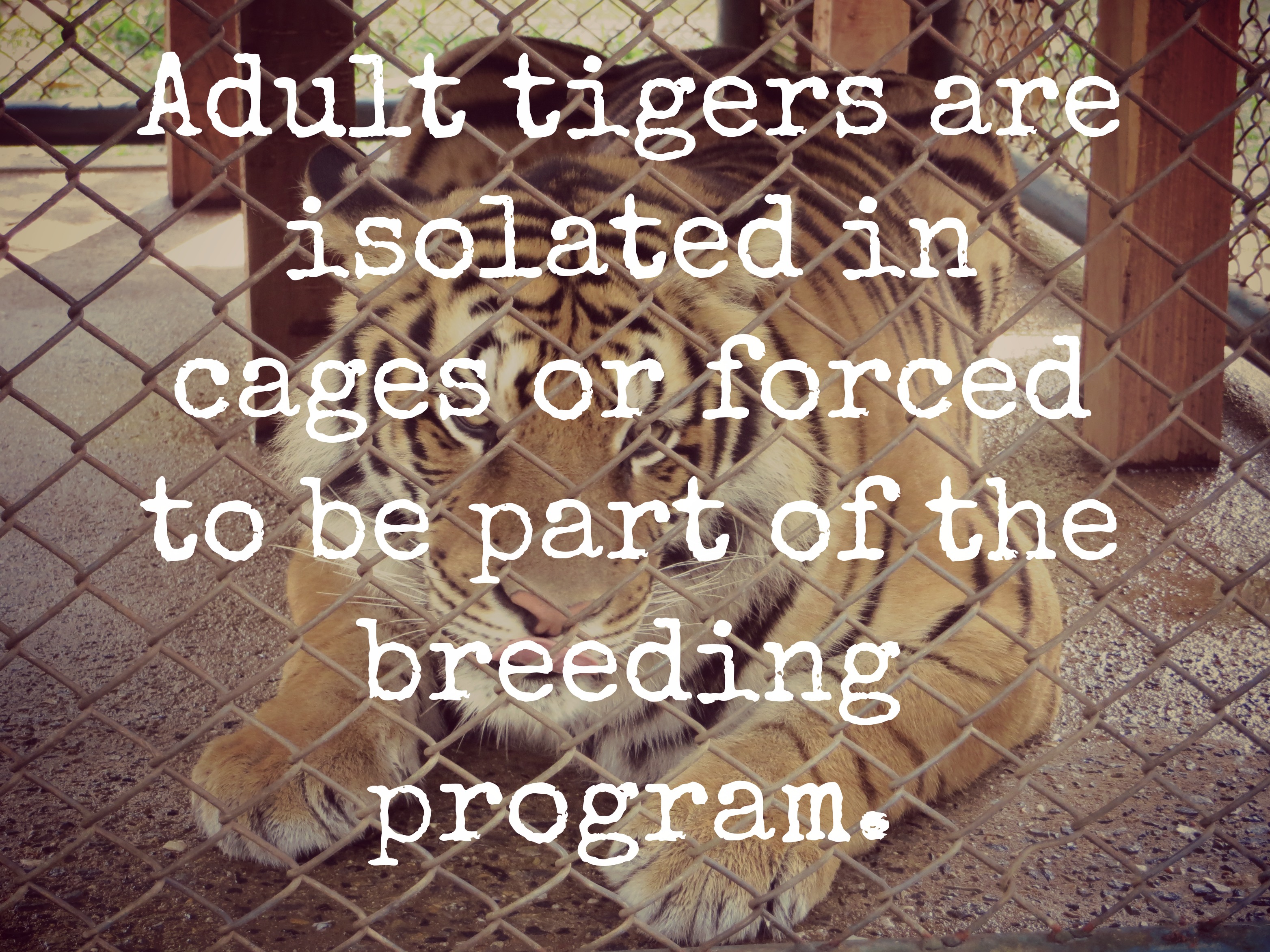 Pim tells The Phuket News, “What else can we do though? We can’t release them into the wild. The truth is there is no income and no provisions to take care of them otherwise, so we need to do this.”

What You Can and MUST Do to End the Suffering

There are many tourist traps that operate under the guise of a “sanctuary” or “rescue center” for wild animals, but there are many red flags that you can look out for to be sure you are not supporting this cruelty. If the sanctuary claims to work for the conservation of the species then there should be some guarantee that the animals will one day be released into the wild. Animals that have been raised by humans and “domesticated” to act friendly towards people can never be released back to their natural habitats. Not only is it highly unlikely that they would be able to survive, their comfort around humans can lead to incredibly dangerous encounters.

Facilities that encourage you to take selfies with wild animals are also another HUGE red flag. This activity is solely aimed at exploiting the animals being held captive for profit. If you see trainers who carry sticks or weapons to “tame” the animals, this is also another sure sign that these animals have been trained to associate these sticks with pain and their sight will encourage their submissive behavior.

Now that you have learned the truth, it is your job to help inform others! Share what you’ve learned with everyone you know and post a review on the TripAdvisor page for Tiger Kingdom. If there are no tourists to pay for photos with tigers, these facilities would not exist!