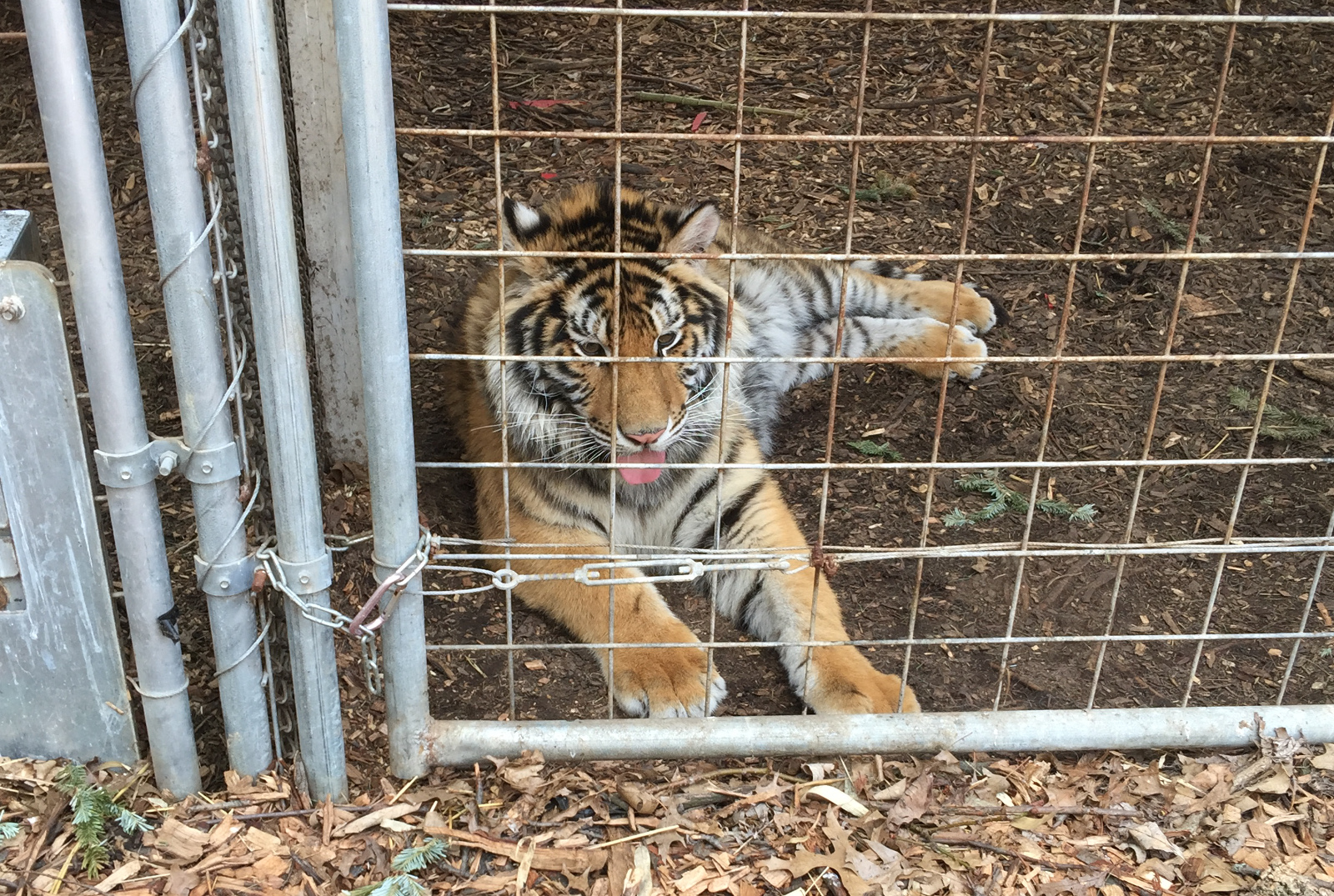 For over 45 years, Massillon Ohio’s high school has had a tiger cub bred specifically to parade around for a few months as a  live tiger mascot for their football team.  For this school, football tradition is everything.  Obie stands for their motto – “Orange and Black is Everything!”

To the students and faculty, what happens to these tigers for the next 20+ years of their life or where they end up really isn’t as important as having that cub there on the field for every game, among screaming fans and loud marching bands. It’s part of their culture. Through the years, 45 cubs have been bred and used this way, just to be passed along. (Read what’s happened to many of these cubs HERE.)

Over two years ago, an informed source contacted The Wildcat Sanctuary having seen firsthand how the latest Obie cub (whose real name is Lilly) was being treated. When the school was through using Lilly, she returned to notorious Stump Hill Farm, a supplier of Obie cubs for many years.

Lilly spent endless days in a barren tiny cage, the size of a dog run, squeezed between cages holding an adult lion on one side and an adult tiger on the other. Though this was a time of life she’d be with littermates and her mom in the wild, playing energetically, learning how to hunt and survive, for Lilly, life was boring and the days of monotony were long indeed.

The source arrived one day to find Lilly missing and her cage stained in blood. Knowing Lilly was a curious cub and with shared walls, she worried maybe the tiger or lion next door had reached through the 4”x4” cage wire, or she’d reached through to them, and possibly been fatally injured? She was devastated.

Eventually, she found out the truth. Lilly had indeed been injured. Her toe had to be amputated and a vet had to sew up her injured leg.  Lilly had been put in another small cage, in a dark shed with no light, alone to recover. Her heart broke for what this little cub was going through as she heard her moaning inside.

When she reached out for help for Lilly, U.S. Department of Agriculture (USDA) inspectors were contacted to do a surprise inspection. The seven-page report inspectors filed was shocking. Stump Hill Farm completely denied they had a young tiger there, as they kept her hidden in the shed. It wasn’t until the source made sure inspectors heard Lilly moaning in the shed that they asked what was inside the shed? Stump Hill Farm was forced to acknowledge she was there, but said she’d injured her paw on fencing.

In an effort to expose the truth about what happens to these live mascots, the media was contacted and several news outlets did indeed showcase Lilly’s story. But again, just as the students who’d once staunchly defended the wonderful treatment they thought Lilly received in a small cage, on the field and in parades, the students moved on and so did the media coverage.

But, for Lilly, nothing changed.  And then one day, she truly did disappear.

Stump Hill Farm refused to say where she’d gone or what they’d done with her. The source who’d loved her for so long was devastated. She reached out again to The Wildcat Sanctuary for help locating Lilly.

For nearly two years, The Wildcat Sanctuary has been documenting and following Lilly. For those who rescue big cats, this story is all too familiar. These cats disappear into a broken system where records are scarce and tracking is difficult. Though it would be nice to be able to step in and rescue her, laws and regulations have to be followed.

Much later, The Wildcat Sanctuary was contacted about a possible outbreak of ringworm at a facility in Michigan and told there were several animals affected and missing a large amount of fur. To the sanctuary’s surprise, one of the tigers at this roadside attraction was named Lilly!  Could it be “our” Lilly?

Tracking down photos and dates, The Wildcat Sanctuary was able to put the pieces together. It was indeed Lilly from Stump Hill Farm, now residing at Summer Wind Farms Sanctuary in Michigan – no real “sanctuary” at all. But, that wasn’t good news. In fact, she’d simply gone from one facility with a long list of violations to another with even more!

In a rare move, Summer Winds Farm Sanctuary had been taken to court by the USDA in 2012. After six years and over 16 pages of violations of the Animal Welfare Act dating back to 2006, their license had been suspended for three months, they were prohibited from taking in any more animals for two years, and a civil penalty of $500 was assessed.

Lilly arrived at Summer Wind Farms after their prohibition to acquire animals had been lifted. It appeared nothing had changed there, in terms of poor treatment for animals based on USDA inspection reports.  Since January 2014, they were cited 147 times for violations with 49 noncompliance violations in 2015. And yet their license was renewed each year.

Under pressure from animal welfare groups, a 24-page complaint list was filed with an administrative law judge detailing egregious animal abuse from 11/2012 – 10/2015 at Summer Winds. These are but a few of them:

If Summer Wind Farms Sanctuary is found guilty, a monetary fine of up to $10,000 per violation could be assessed, as well as revocation or suspension of the facility’s license.

In March 2016, the owner was cited yet again for continuing inadequate veterinary care and enclosures, noting a 25-week-old tiger named Daisy was being held in the basement of a home. When they took in Daisy, the owner said he was also offered another young tiger used for photos but, since he didn’t have room, it was killed. This is tragic since there are so many truly accredited sanctuaries that would have immediately stepped up to take in this cub, had he only reached out or had they known of the situation.

The years of documenting violations means little to the cats like Lilly who continue to be exploited and receive substandard care. The Wildcat Sanctuary will continue to fight for Lilly to have the life she deserves, the life the students and faculty thought she’d have.

They’ve all forgotten about Lilly, but as animal advocates, we won’t. And we’ll continue to offer her a home for the rest of her days. There are reputable sanctuaries that stand ready to help these animals. Now, it’s up to the regulatory agencies to assure that finally happens for them.

UPDATE 5/4/16: In a long-awaited move, authorities seized dangerous animals at Stump Hill Farm today. Once again, Lilly came so close to being rescued. Had she not been transferred by Stump Hill Farm out of state, perhaps her days of being exploited would be over.  We continue to urge authorities to take further action at Summer Wind Farms in Michigan to safeguard the animals suffering there, too. And we will offer a home for Lilly no matter how long it takes to rescue her. You can email the USDA to request intervention for the animals at: [email protected]is.usda.gov