Photographers Capture Powerful Images of Animal Exploitation Around the World

Lead Image Source : Aitor Garmendia - MEXICO_DSC_0240 In this slaughterhouse, cows are immobilized by having a blade thrust into their spinal cord, a process known as pithing. Mexico
Subscribe to Newsletter
FoodMonster App
Buy our Cookbooks
Sign Our Petitions

Animal exploitation and abuse are not an exception nor a rarity in today’s society; they are the norm. They happen everywhere in such an abundance that not supporting animal cruelty is not the default, but a decision that must be made over and over. This is in part a product of anthropocentrism, a worldview that revolves around the notion that human beings are “the central or most significant entities in the world.”

We’re Living in an Anthropocentric World

According to the philosophy of anthropocentrism, humans are “separate from and superior to nature” and “human life has intrinsic value while other entities (including animals, plants, mineral resources, and so on) are resources that may justifiably be exploited for the benefit of humankind.” This philosophy so strongly characterizes the state of our current world and how humans have impacted it, that some scientists refer to the current epoch as the Anthropocene. The consensus is that the Anthropocene began in 1950 “when human activity started to have a significant impact on the planet’s climate and ecosystems.”

Hidden: Animals in the Anthropocene

Because today’s predominant worldview privileges humans over other animals, animal exploitation pervades all aspects of our society. From our food and our clothes to our traditions and forms of entertainment, animal suffering is commonplace. And yet, animal suffering and cruelty are also still hidden; not despite, but because of the ubiquity of exploitation. It is so pervasive and thus, normalized, that we can interact with and support these exploitative practices without truly comprehending or internalizing the pain that they cause.

Existing in a state of willful ignorance, one can look at a product of animal exploitation and only think of the surface level: the rich taste of a steak, the awe of a circus trick, the cultural significance of a bullfight, the warmth and elegance of a fur coat. However, once we critically evaluate the exploitative structures in our society, as well as realize the inherent value and sentience of the creatures that experience such cruelty, it’s impossible to look at the world in the same way.

HIDDEN: Animals in the Anthropocene by photojournalists Jo-Anne McArthur and Keith Wilson wakes its viewers up. The book confronts the gruesome reality of animal exploitation through disturbingly intimate photographs from around the world. Each image compels its viewer to look at the reality of an exploitative practice that many people would prefer to keep out of both sight and mind. However, to do so is to remain ignorant and complicit in the suffering of countless beings. When presented with another’s suffering that we have the power to do something about, it’s vital that we not only look but also bear witness. 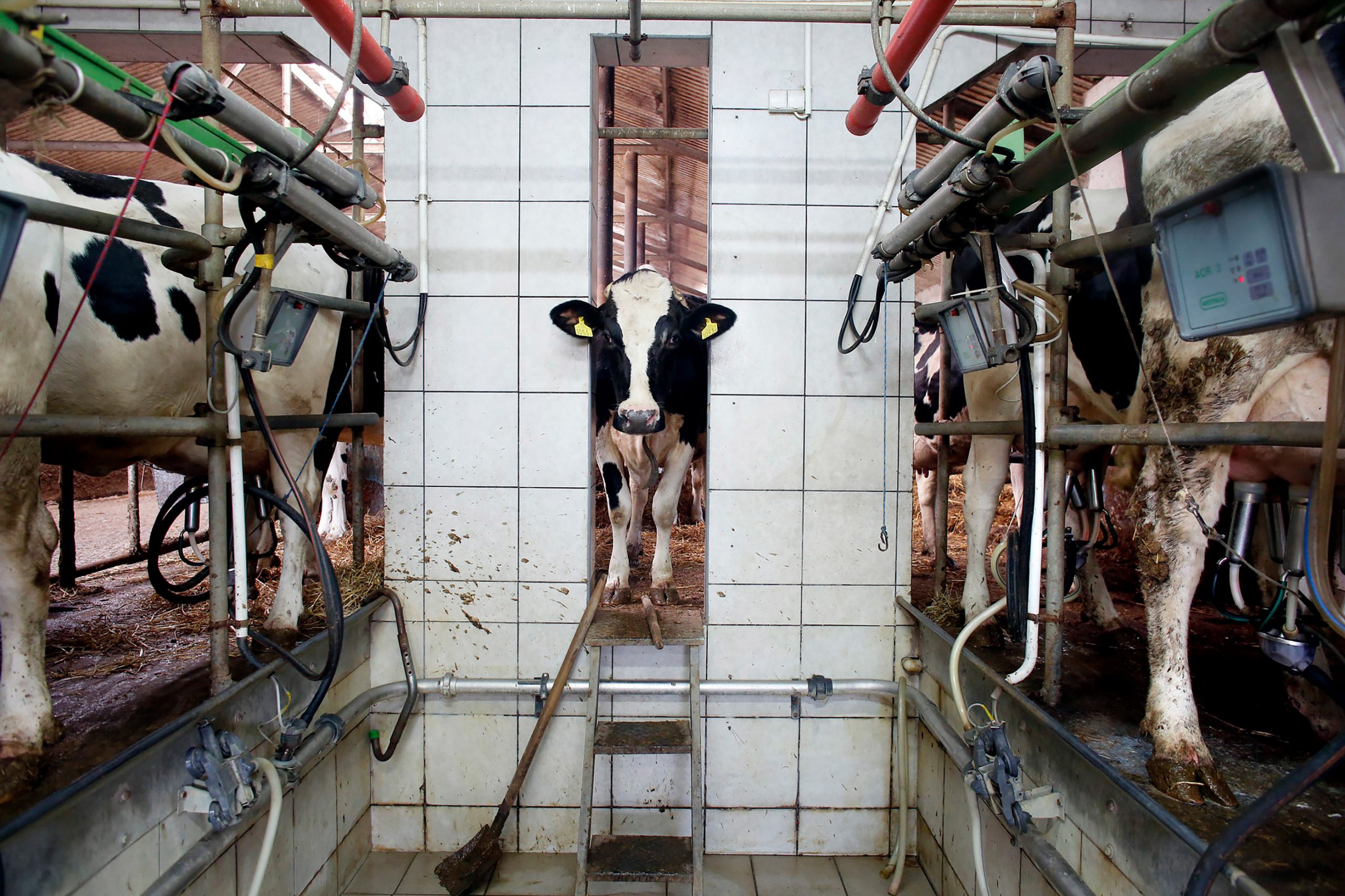 The USDA estimates that in 2018 alone, 9.59 billion animals were slaughtered for food in just the United States. Animals that are exploited by the industrial farming industry, are confined to tiny, unsanitary spaces, stolen from their mothers immediately after birth, genetically modified to grow at rates that are too quick for their bodies to handle, and physically tortured until they are slaughtered. 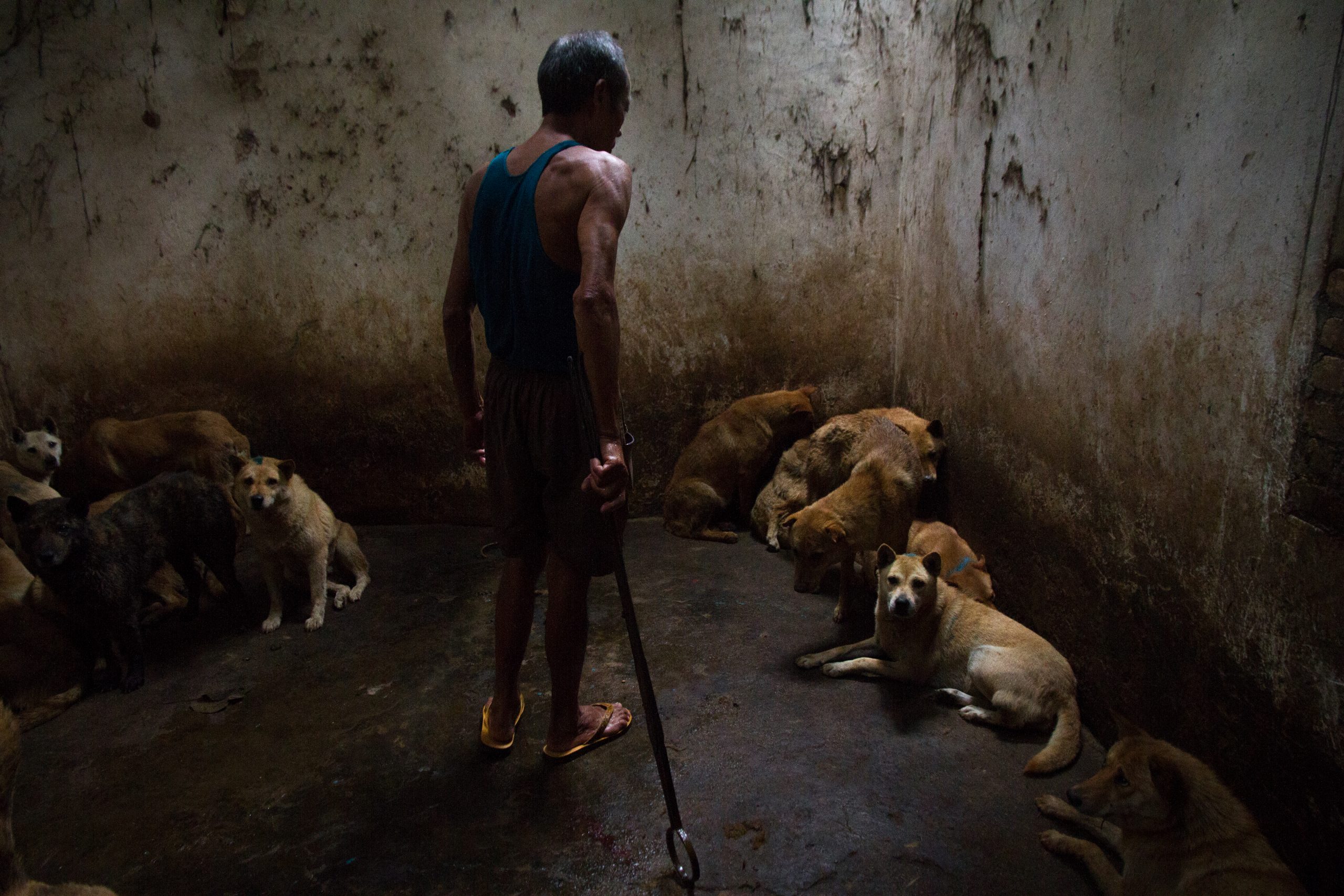 Who’s next? At this dog slaughterhouse, a butcher chooses the dog he will beat to death with an iron bar while the other dogs look on. China

Dogs that are slaughtered for consumption are kept and transported in terrible conditions. Like many animals used for food, these dogs may be physically abused, denied a sufficient amount of food and water, and confined to tiny cages where disease can spread rapidly. Sadly, there have also been many cases of dogs being stolen from people’s homes or off the streets to be slaughtered for food. 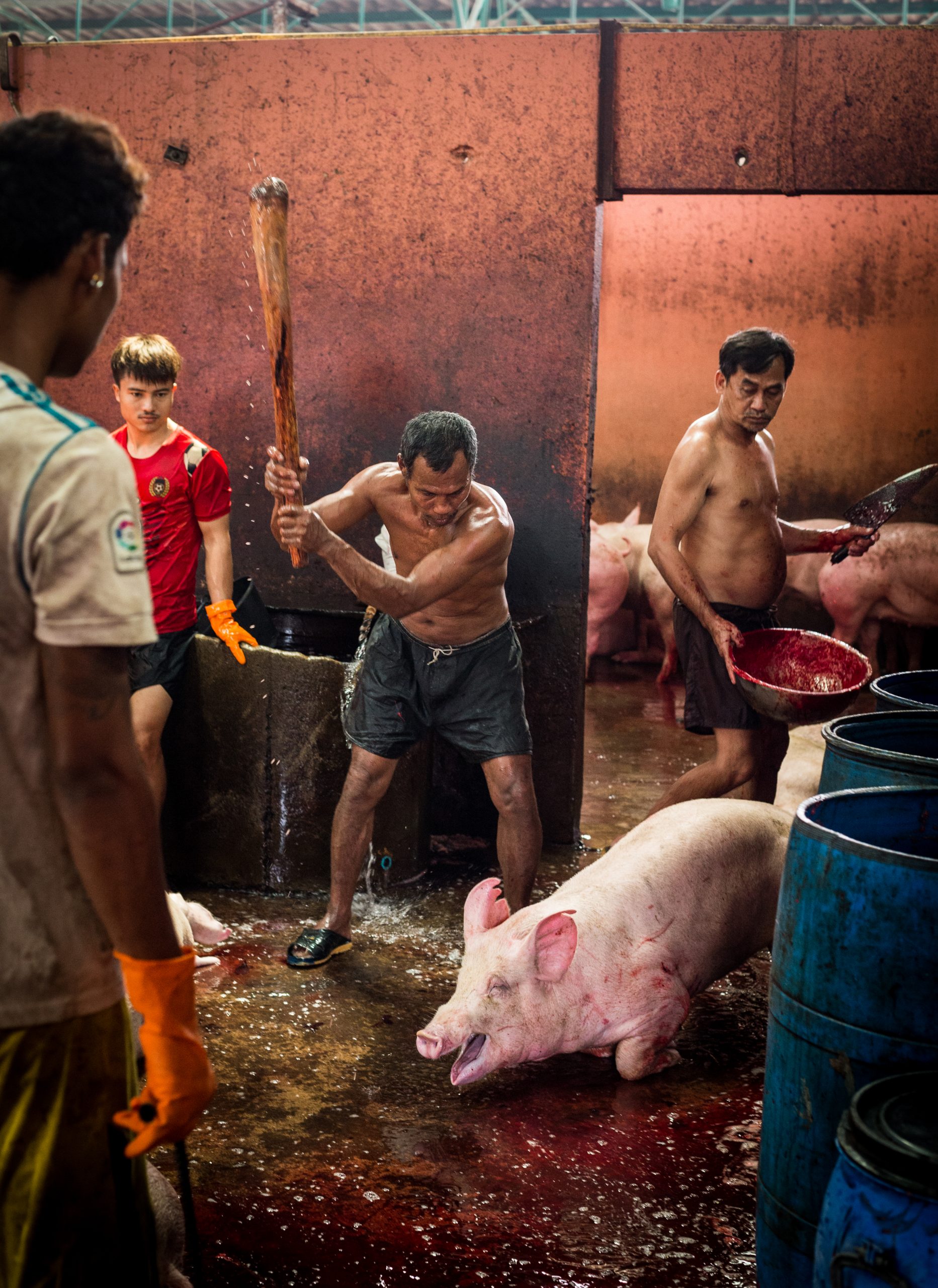 A pig screams as she is clubbed before slaughter. In some small Asian slaughterhouses, clubbing is used to stun pigs. This often fails to render the animals fully unconscious before their throats are slit. Thailand

Slaughter is the final cruelty that farmed animals suffer. However, many don’t even survive the harsh conditions of a factory farm long enough to make it to the slaughterhouse.  When it’s time for slaughter, tens of thousands of chickens are boiled or drowned alive, cows who have become too weak to walk are dragged with chains around their legs, and “uncooperative” animals are prodded and shocked. Animals are often stunned, clubbed, or subject to some other painful practice to render them unconscious or unable to feel pain. Sadly, this often doesn’t work and the animals die a slow, painful death. 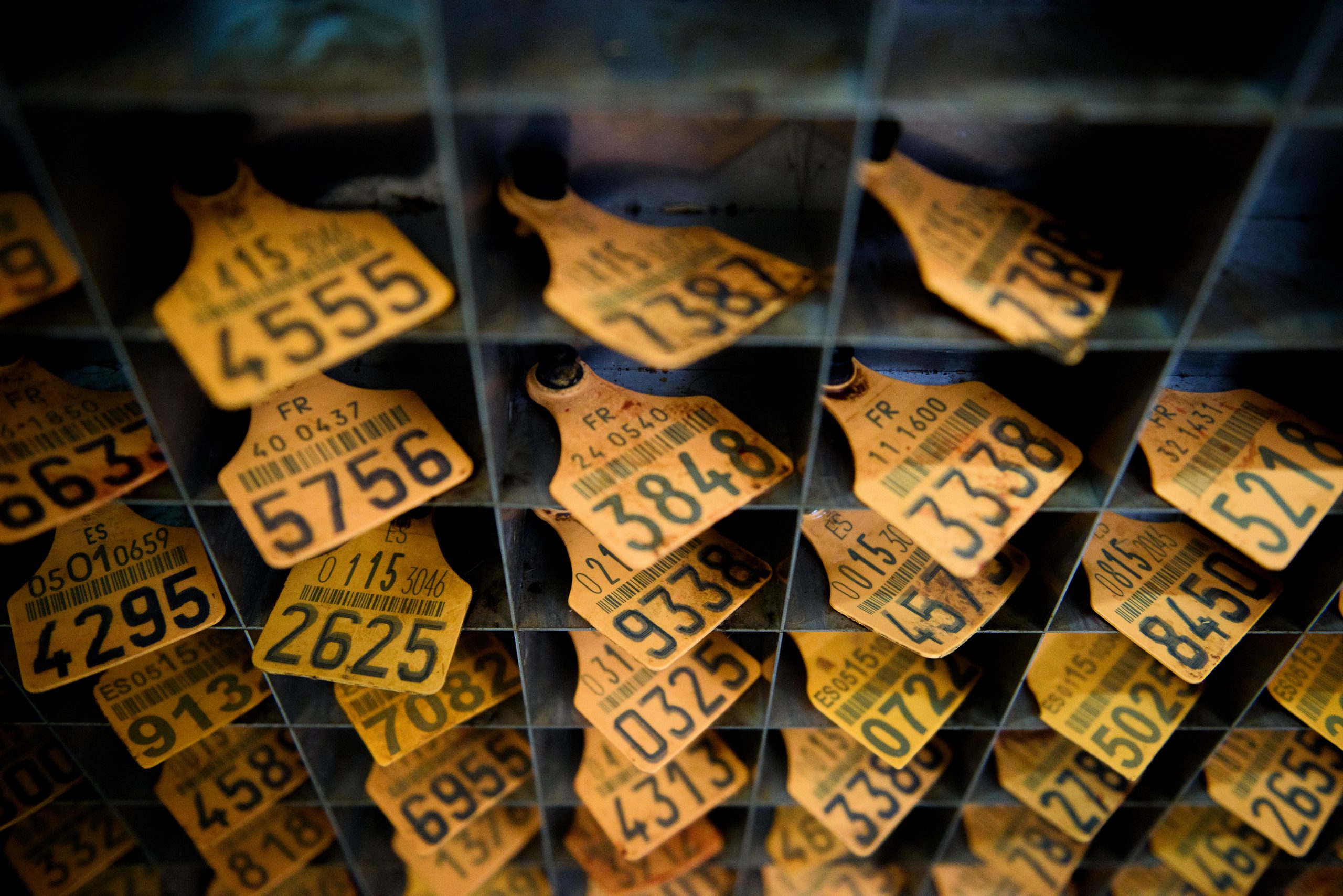 Ear tags are removed from animals after slaughter and stored temporarily for record-keeping. Spain.

Live animal exports are extremely stressful for the animals involved. These animals will suffer for days without access to food or water until they finally reach their destination – just to be slaughtered. Oftentimes, they are kept in extreme weather conditions without any protection. There have been multiple cases of live transport animals dying due to heat stress or even drowning in overcrowded ships. 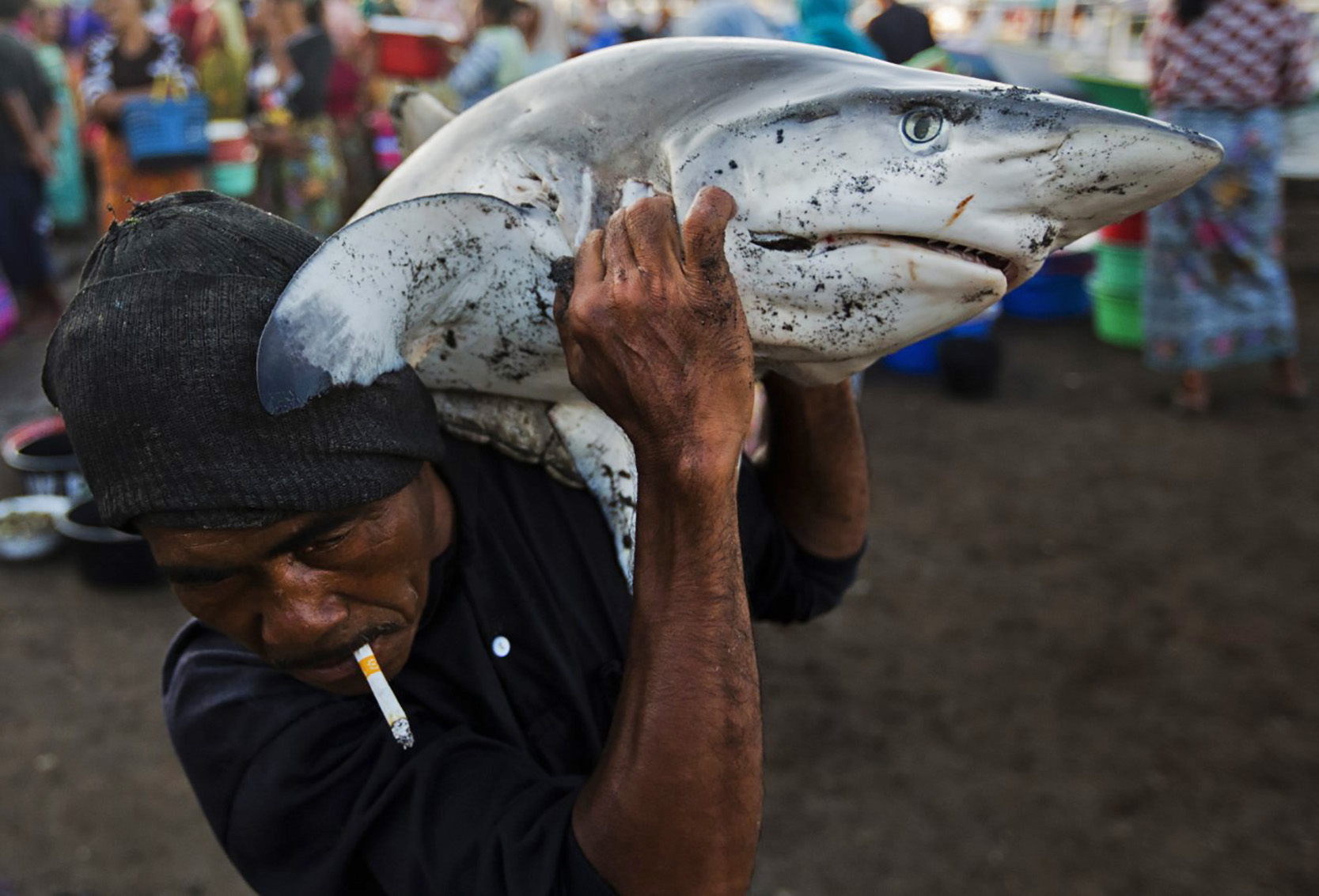 A fisherman carries a shark at a market in Lombok, one of the largest exporters of shark fin to China. Indonesia

Finning a shark involves slicing off a shark’s fins and then dropping back into the ocean, oftentimes still alive. These sharks slowly sink to the bottom of the sea where they will eventually die. There are a variety of methods used to catch fish in the commercial fish industry. Each one usually causes the fish to suffocate or bleed to death while being pulled up. If they are alive when pulled on board, the fish are slaughtered or put on ice and die a slow, painful death. Furthermore, hundreds of thousands of marine animals are killed and injured by commercialized fishing practices every year. Dolphins, whales, sharks, sea turtles, and seals often become “bycatch,” the unintended victims of huge fishing nets. Overfishing also disrupts the food chain, leading many marine animals on the road to extinction. 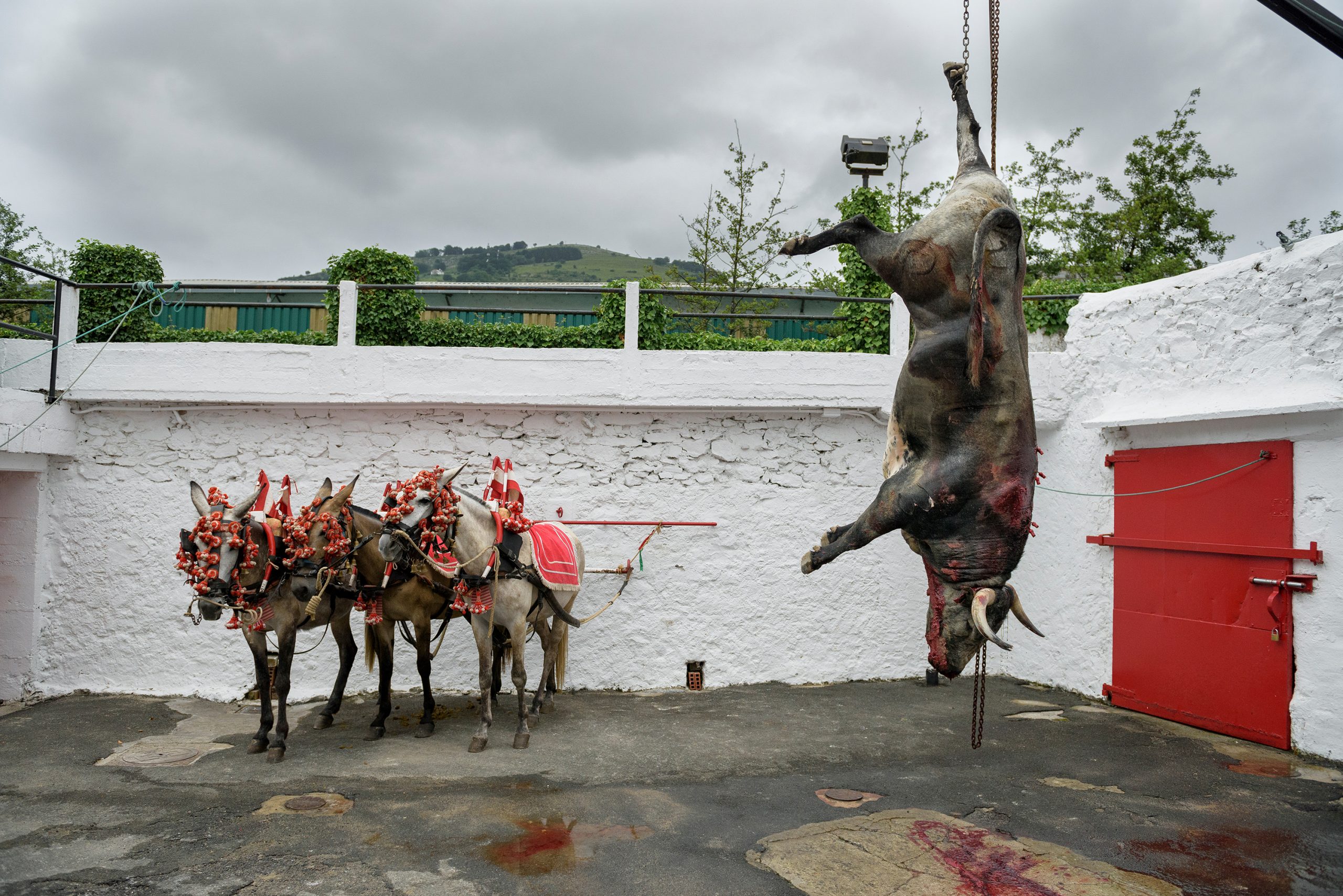 Inglorious death. In the horse yard of the bullring in Azpeitia, a bull is hung by his hind leg to bleed out before being butchered at the local meat works. Spain

Using animals as a form of entertainment is widespread and takes on many forms: bulls stabbed multiple times with 8-inch blades, dogs trained to fight each other to the death, elephants stabbed with bullhooks so that they will perform unnatural tricks, orcas taken from the wild and kept in tiny tanks – the list of ways we exploit animals as a form of “entertainment” goes on. Not only do these poor animals suffer repeated physical abuse, but also often suffer from zoochosis, which may cause animals to harm themselves and others as a result of being in captivity. Despite the heartbreaking degree of cruelty and abuse, many humans still view these abusive activities as “fun” and “enjoyable.” 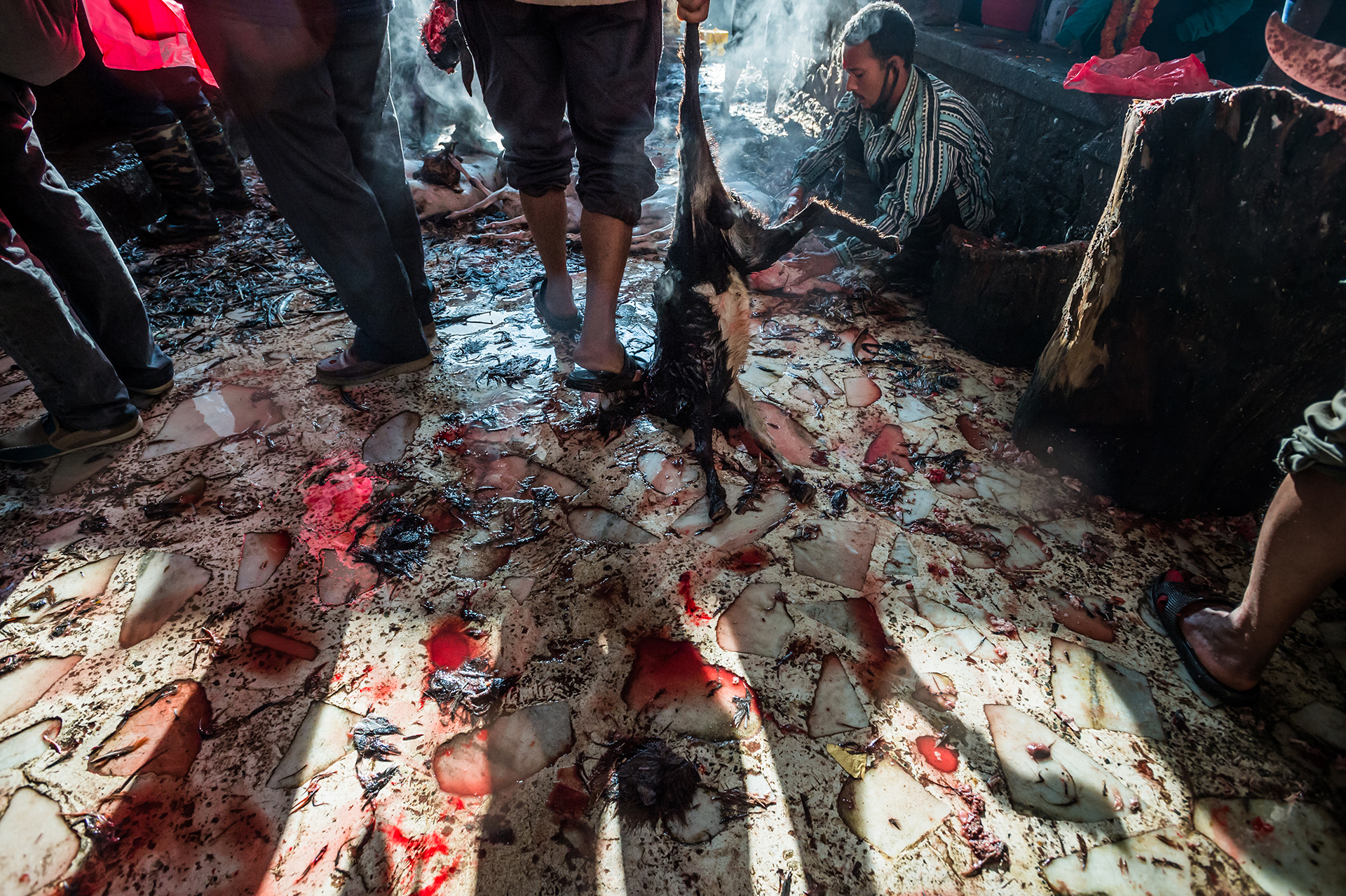 Animal sacrifices are still made to Kali, the goddess of time, power, creation, and destruction, at this Nepalese temple. Nepal.

While ritual sacrifices and similar ceremonies may seem like they belong to a different time, they still are a part of many cultures and religions today. For example, at the Gadhimi Festival in Nepal, thousands of buffaloes, goats, and chickens are sacrificed to the goddess Gadhimai, and before the Jewish high holidays, a small portion of people participate in Kapparot, which includes swinging or circling a live chicken around someone’s head and then slaughtering it. Animals are also murdered en-masse for traditions such as Thanksgiving, which, for many Americans, revolves around eating a turkey; Grindadrap, an annual whale and dolphin hunt in the Faroe Islands); and the Yulin Dog Meat Festival. Sadly, culture and tradition are common excuses that people use to justify harming animals all around the world. 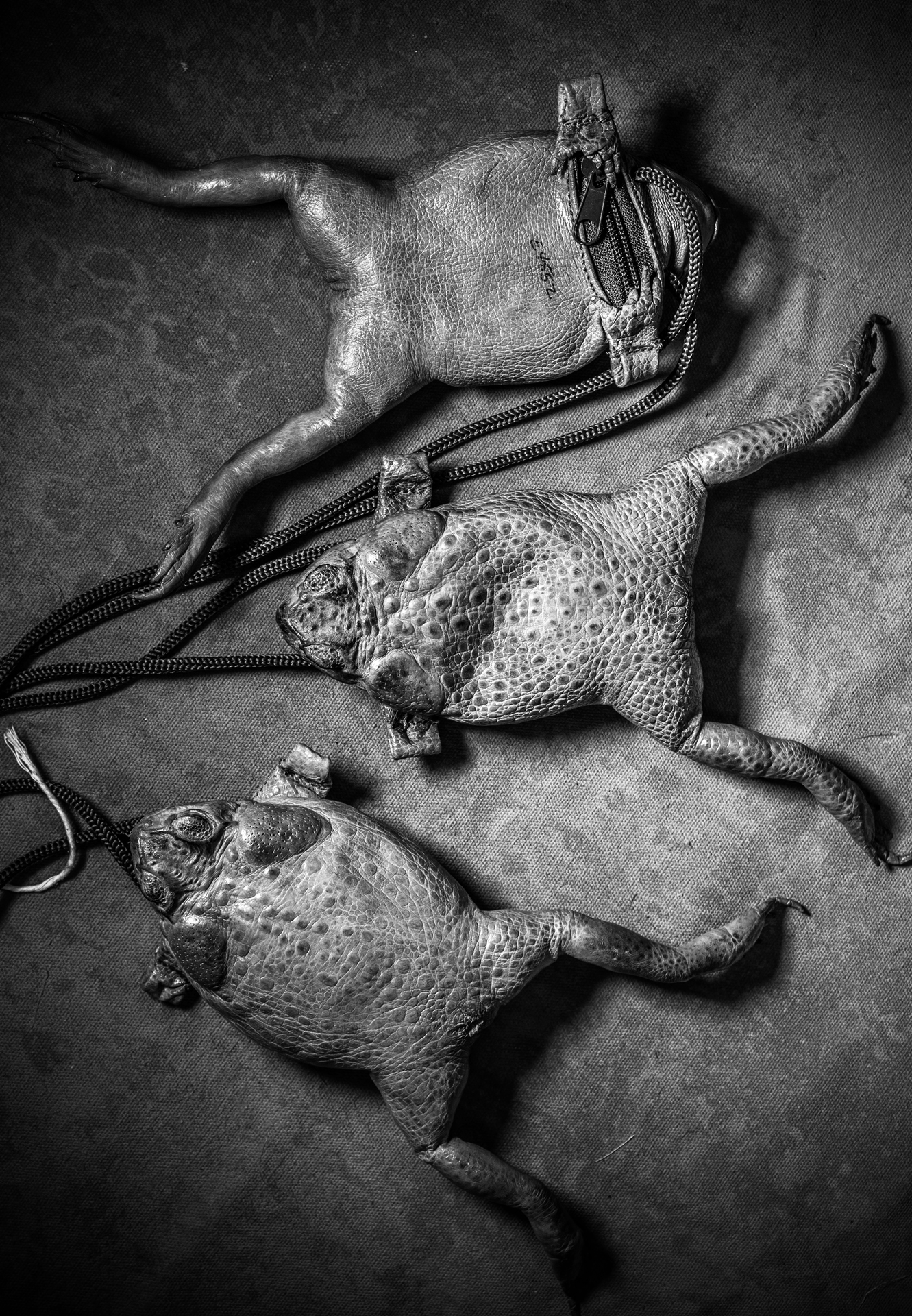 Farming animals for their skin and fur is similar to animal agriculture practices as the animals are kept in tiny, unsanitary cages, where they suffer from illness and injuries. Animals that are sheared, like lambs and alpacas, may have their tails or other parts of their bodies cut off without anesthesia; roughly handled; and subject to other forms of abuse that cause severe injuries as well as emotional distress. Other animals, like minks, crocodiles, cows, and rabbits, are brutally killed by being gassed, skinned alive, or electrocuted, to name a few examples. 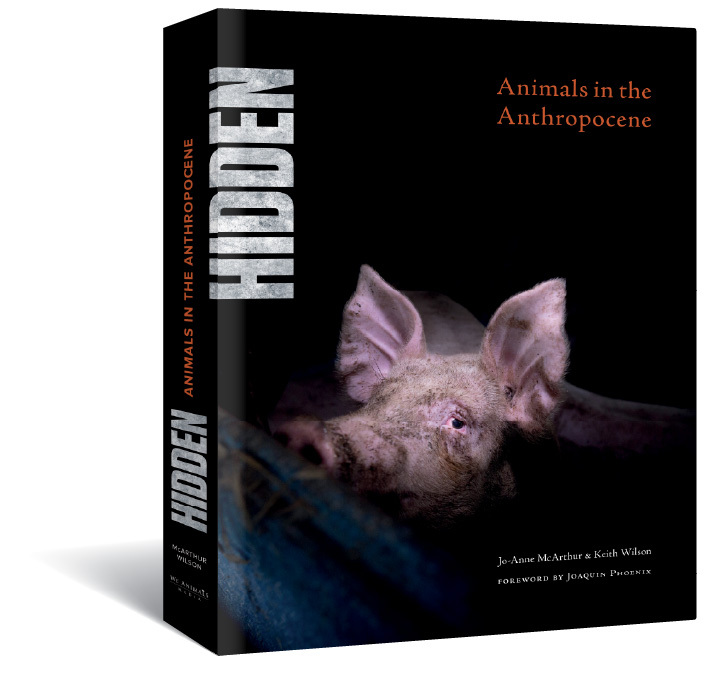 You can view more images like these and read more about the multitude of ways that we exploit animals in HIDDEN: Animals in the Anthropocene. The book features a foreword by Joaquin Phoenix and also focuses on other aspects of our society that involve animal exploitation, such as catastrophes, wildlife markets, research, and more.

Even though it’s easier to only recognize animal abuse in practices that belong to other cultures, other countries, or even just other people, displacing blame onto others is merely a way to absolve ourselves of responsibility. We must continue to evaluate the ways that our actions impact human and non-human animals. We all have a responsibility to help those who are suffering and do what we can to change the systems that allowed that suffering to take place. Educate your friends and family members about what goes on in various exploitative industries. Email your government officials and encourage others to do the same. Change starts with ourselves, but there’s no reason that it has to stop there.