5 Shocking Reasons You Should Skip Angora Wool This Winter

We can ignore it all we want, but winter is fast approaching. With the weather getting colder, many of us are pulling out our winter wardrobe and bundling up. But how often do people purchase clothes in the pursuit of warmth and hesitate to consider what it’s made of, (wool, fur, leather) where it came from (animals), or even where it was assembled (sweatshops)?

There is a cruel reality that many choose to ignore when purchasing their garments. In particular, the abuse and senseless killing of animals who are thought of as nothing more than mere commodities in the fashion industry. Sadly, because of this, their pain and torture too often go unnoticed. Although various retailers have publicly stated they only accept products from farms that have “good animal husbandry” techniques, vast amounts of materials pass through the hands of brokers prior to reaching the actual retail facility, making it difficult to track exactly where it originated.

Angora wool, known to be softer than cashmere, is one of the most sought after materials for those soft, warm sweaters so many people desire. The fine fibers come from the domestic Angora rabbit. Although its history is contentious, the Angora rabbit has been bred for centuries throughout Europe and was only recently brought to the United States in the 1920s.

These docile and clean animals spend their lives on angora wool farms in tiny filthy cages surrounded by their own excrements. With cages so small and conditions so repulsive it’s no wonder the angora wool industry wants to keep the truth of how their garments are produced a secret. In 2013, PETA released footage from their undercover investigations of ten angora farms in China. The investigations showed workers tying severely distressed rabbits down and ripping the fur from their bodies. The footage is graphic, but it is heartbreakingly real.

While you might be inclined to reach for a soft angora sweater this season, you should consider the pain and suffering that occurred to make that sweater possible. Here are 5 facts you NEED to know about the angora wool trade:

1. Today, 90 percent of angora wool being sold has been imported from China. Notorious in the animal rights community, China is known for their lax animal welfare laws and negligence when prosecuting those who have perpetrated animal abuse. 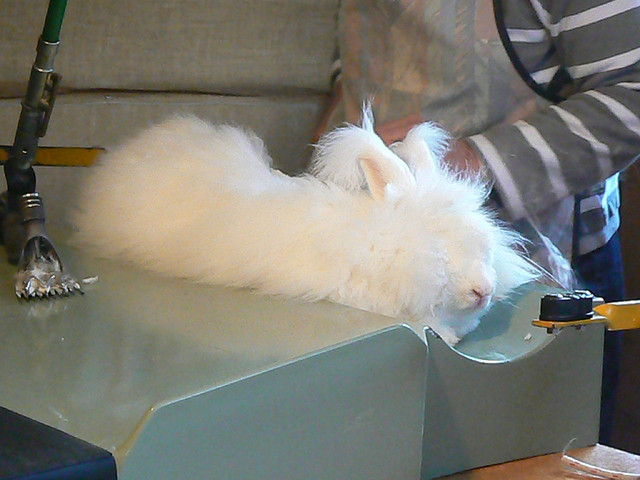 2. Angora rabbits are sheared every three months for two to three years. As they age, the rabbits yield less fur and are ultimately strung up and inhumanely killed before they’re sold to market for their meat.

3. The male Angora rabbit has a fur yield that is only 80 percent to that of the female. They’re routinely killed immediately after birth since they’re not profitable to the breeder.

4. The trade value of angora wool is $27 to $35 for every two pounds. Longer hairs are worth more, which are achieved by plucking directly from the skin rather than shearing.

5. It’s estimated that there are 50 million rabbits being farmed for their wool in China, each one producing on average one pound of fur per year.

Popular retailers H&M, ASOS, French Connection, Forever 21, Eddie Bauer, Calvin Klein and Tommy Hilfiger have published statements voicing their opposition to the angora wool trade and affirmed that they would cease production of any products made with angora wool; but some consumers have commented that they’re still finding garments made with angora online and in stores.

Harvesting angora wool without harming the rabbit requires slow labor that isn’t congruent with the industry. Angora wool farms, like so many others similar to it, only continue to exist because of supply and demand. The fashion industry systematically attempts to conceal the abuse and killing of animals for their products as much as possible – if consumers knew the truth, after all, it could hurt sales. But, a portion of the public need to take some of the blame as well for their refusal to acknowledge the abuse in the products they purchase. We need to join together and let major retailers selling products made with angora wool know we will not purchase from them while millions of rabbits continue to suffer in cruel and deplorable conditions!

For a better way to keep warm this winter, check out this list of 7 Fabulous Cruelty-Free Fashion Brands.