The Animal Victims of Wildfires

By Ali Crumpacker, The Fund for Animals Wildlife Center 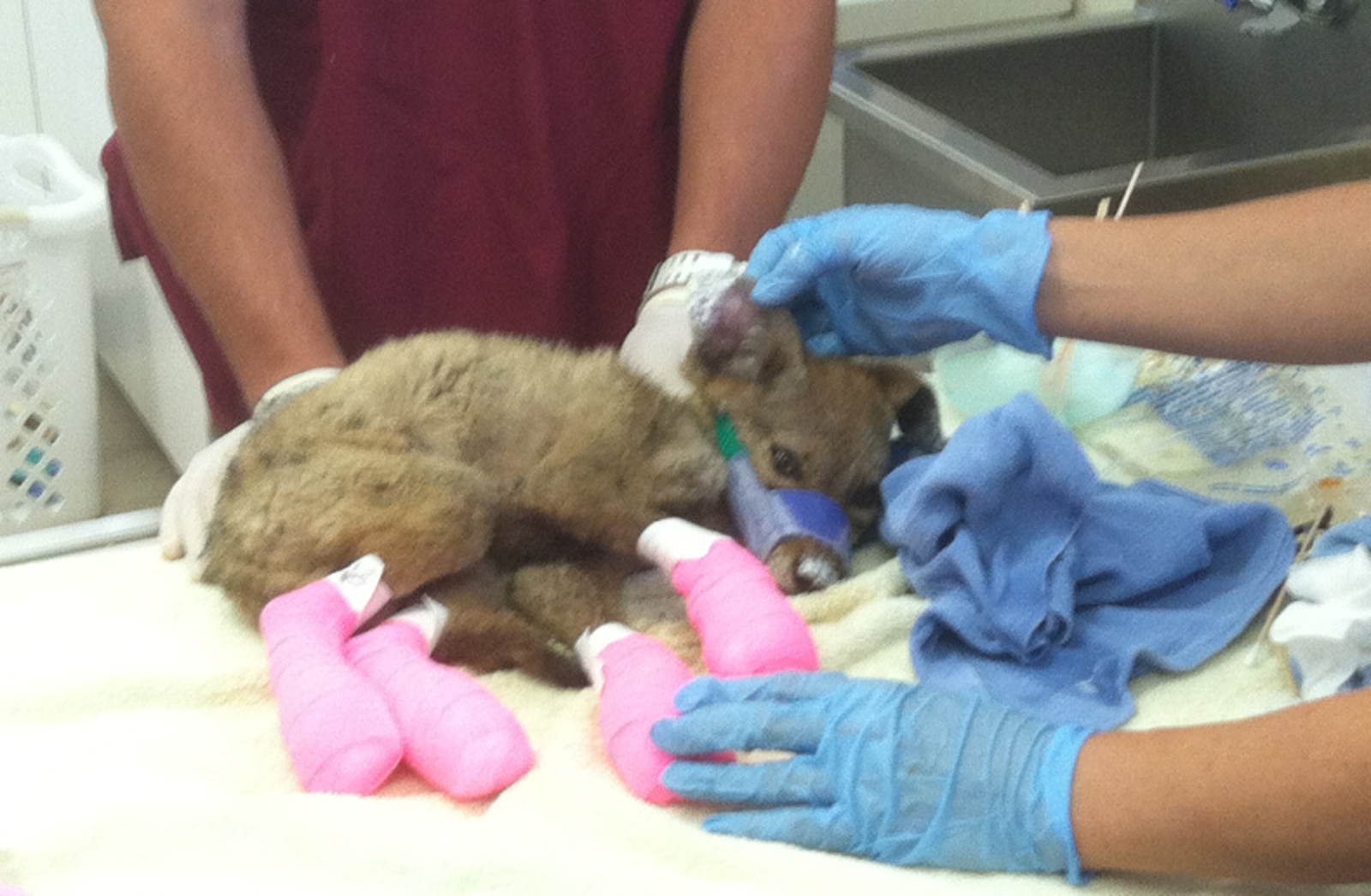 When the media tells stories of massive wildfires sweeping across the countryside, they highlight the number of first responders on the scene, the widespread evacuation orders, the amount of structures in harm’s way, and the running total the emergency is costing the state. Yet the victims who are now homeless, the animals who called those wooded canyons or forested hillsides home, are often forgotten.

Wildfires are dangerous for animals in any circumstance, but since firestorms create their own wind patterns and rapidly whip across vast stretches of undeveloped land in all directions, the unpredictability gives native wildlife little chance to escape. Birds attempt to fly out of harm’s way, but the battling winds and the blistering heat from the flames disorients and exhausts them. Mammals must run, often over burning grasses and through smoke filled air. 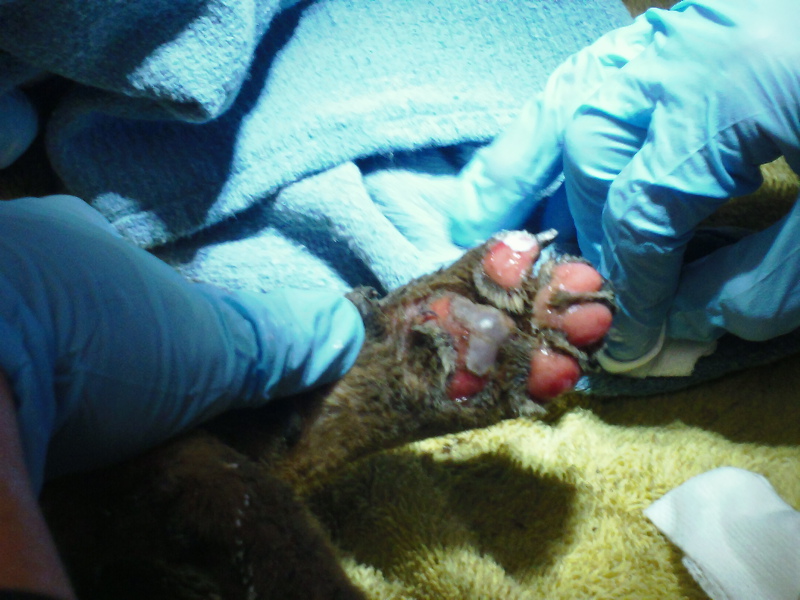 There is little emergency responders can do for wild animals while the fires are burning. These creatures are naturally wary and fearful of humans, and with the added chaos of the fires, they are frantic and desperate to find a safe place to stop running. With the fires sending them out of their niches, wild animals run towards the hoses, sirens, and streets.

Obstacles send them reeling back to the flames until they settle on a direction to travel, all while trying to run the border between human-cultivated land and the burning wilderness. By the time they stop, if they have made it out at all, the animals are dehydrated and exhausted. Many have smoke-inhalation issues and some will have burns. All will be displaced.

Injured and ill wild animals must receive care from a licensed rehabilitator, like The Fund for Animals Wildlife Center in Ramona, Calif. The San Diego County-based wildlife rehabilitation center began preparing for the arrival of fire victims when the 2014 firestorm began in early May. 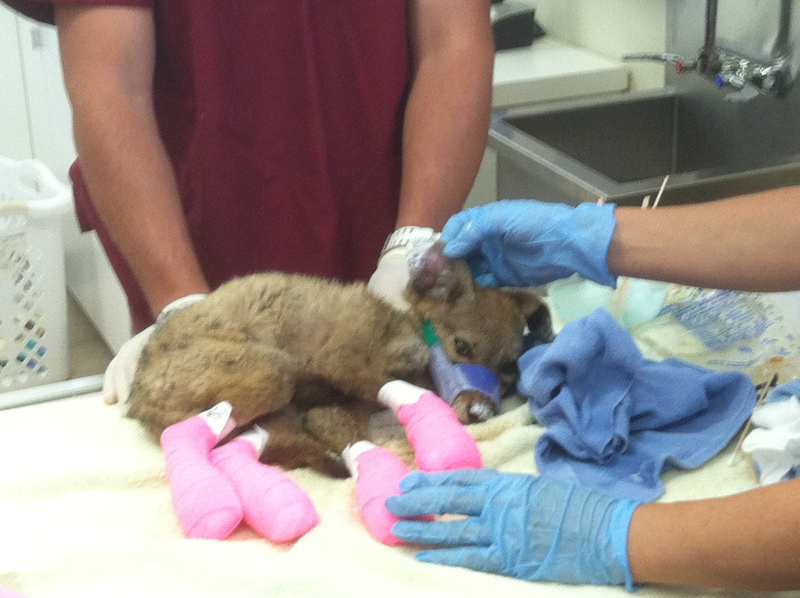 Unlike humans who may be injured in the fires and will receive immediate medical attention, wildlife victims often take several days to be found and rescued. Birds are usually the first to arrive at the medical center. Damaged wings and symptoms of head trauma indicate the birds were caught in the turbulent winds; respiratory stress indicates they have smoke inhalation issues. The birds arrive in waves, and all needed fluids to combat dehydration and the stress of the trauma they just endured.

The mammals do not arrive until a full week after the fires started. Having run for miles through the burning brush, they no longer know where to find food or water. In this case, wild animals are forced to face their fear of humans and look for easy to access fruits, bird seeds, or pet food in backyards. Water can be found in birdbaths, swimming pools, or by digging up and chewing on irrigation lines. If caught by the homeowner, the animals are often too weak or desperate to attempt to run away.

The few who make it to the yard of a compassionate human who takes action on the wild animal’s behalf will be provided pain meds, antibiotics, a warm meal, and a safe bed. While they have a long road of recovery ahead of them, they will be tended to and provided the time they need to recuperate from the trauma of the wildfire. When they are ready, they will be released back to the wild. 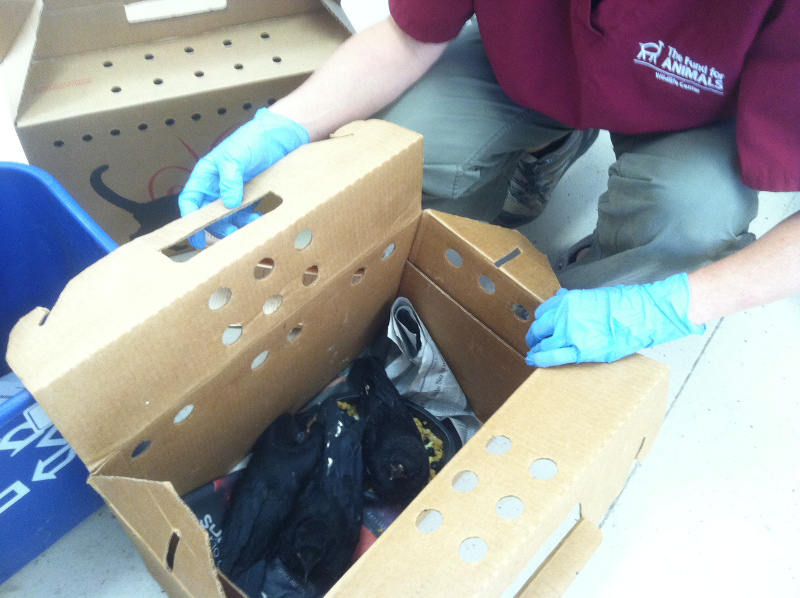 But for all others, those who ran in the wrong direction and found themselves surrounded by flames, we can do nothing more than mourn their loss. And for those that ran, but ended up in the yard of someone who turned away from their suffering, we must ask our neighbors to do more by helping those animals who have lost their homes and are in need a helping hand.

To locate a wildlife rehabilitator near you, click here. The Fund for Animals Wildlife Center, an affiliated animal care center of The Humane Society of the United States, rescues and rehabilitates hundreds of native animals every year with the goal of returning them to the wild. To learn more about the work they do for Southern California communities, visit the center’s website and Facebook.