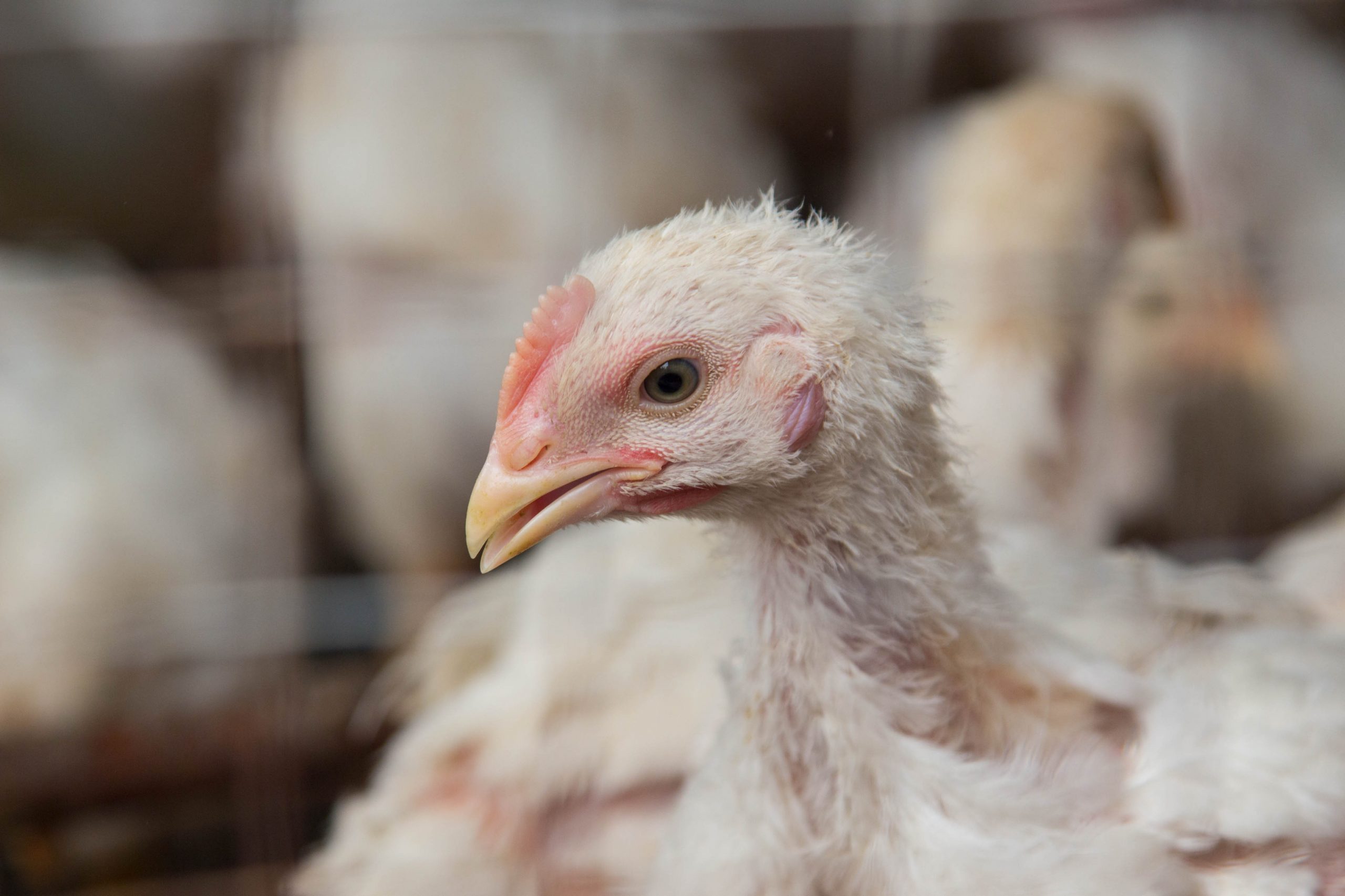 There were more than half a million chickens drowned alive in scalding water tanks last year, according to the USDA. That’s 1,400 birds boiled alive each and every day right here on our own soil. Why don’t more people know about this?

This torturous truth is a result of the cruel industry-standard practice of killing chickens for meat by live-shackle slaughter. Ending this outdated practice would bring the number of birds boiled alive down to zero, as it should be. There’s a good reason that Europe has been moving away from the practice. Reforming the system would also make conditions far less dangerous for workers who often end up covered in scratches, feces, blood, and pathogens.

The Humane League has launched a campaign against the US chicken industry with the mission of ending this practice, which is one of the greatest causes of suffering in slaughterhouses today.

Live-shackle slaughter is the most common method of killing broiler chickens raised for meat, the industry standard for meat producers here in the US. The violent practice—unimaginably gruesome from beginning to end—begins with each bird being slammed upside down into metal shackles, frequently breaking their bones, and making it extremely difficult for them to breathe. The cruel, complex process is hard to stomach but that’s precisely why the industry has been able to keep it hidden for so long. But consumers deserve to know.

Upon reaching the electrical water bath meant to render them unconscious, many chickens will receive an ineffective stun or miss the stun entirely as they frantically try to escape the agony. This means that, as they continue on this already torturous journey, millions of chickens will then have their throats slit open by humans, while they’re still conscious and able to watch and feel the excruciating pain. This happens all while also hearing, seeing, and smelling the other birds being brutally killed around them.

The final step in this truly horrifying process is the scalding water tank, where chickens are submerged in a vat of boiling hot water meant to remove their feathers. But instead of this fate, there were half a million chickens drowned alive in the boiling water in 2019. This means that thousands of chickens are being boiled alive every single week in slaughterhouses here in the US. It’s a ghastly ending to a grim life full of abuse.

It’s not only the animals who are subjected to excruciating agony from this archaic system. Working in a slaughterhouse is one of the most dangerous jobs in the country. The workers on the slaughter lines of today are forced to perform these grueling tasks in unsafe, near-total darkness, aimed to help keep the birds more calm and quiet, unaware of what is happening to them until it does. The processing lines have grown faster and faster over time, now requiring workers to slaughter up to 175 chickens per minute in a typical factory farm in order to keep up with demand.

The birds, desperate and frightened, peck and scratch at workers, sometimes even defecating on them out of pure terror. Dust, mites, and feces fill the air and contaminate employees’ lungs, eyes, and cuts, putting them at a greater risk of disease and infection. Their hands can become deformed from the repetitive, exhausting labor that they perform for hours on end. Workers and animals alike need to see greater protections and an end to this cruel practice.

Live-shackle slaughter is not only outdated and immensely cruel to animals and workers, but it’s also entirely unnecessary, as there are alternative methods available. That’s why The Humane League is urging the US chicken industry to end live-shackle slaughter once and for all.

There is hope for a transition of this kind within the US meat supply chain. In a sustainability report published in May, Tyson Foods—the largest poultry company in the US—announced plans to end cruel live-shackle slaughter methods at four of its US processing plants.

This move is the result of the ongoing efforts of a coalition of several animal protection organizations—including The Humane League—demanding that Tyson and its clients adopt the Better Chicken Commitment, a set of standards that meaningfully improve the lives of chickens raised for meat. This includes ending live-shackle slaughter.

More than 180 major food companies have already adopted the Better Chicken Commitment. However, major meat companies like Tyson Foods have historically made little progress on these issues. Tyson Foods’ recent report represents a significant step toward addressing key animal welfare problems in its supply chain, but there’s still a lot of work to do.

The National Chicken Council, Tyson Foods, Sanderson Farms, Foster Farms, Koch Foods, and the other largest chicken producers in the US—who are collectively responsible for slaughtering 70-80% of birds each year—need to understand that consumers demand real changes for chickens.

It’s time for these corporations to transition away from the cruel, outdated practices of factory farming, adopt much stronger animal welfare policies, and ultimately focus their energy on expanding their plant-based alternatives in order to improve the treatment of animals and workers suffering within their supply chains.

These meat industry giants have a unique power—and responsibility—to make these changes that will impact billions of animals every year. By phasing out live-shackle slaughter in their supply chains, countless chickens will be spared from one of the greatest causes of suffering in slaughterhouses today. Because even one bird boiled alive is too many.