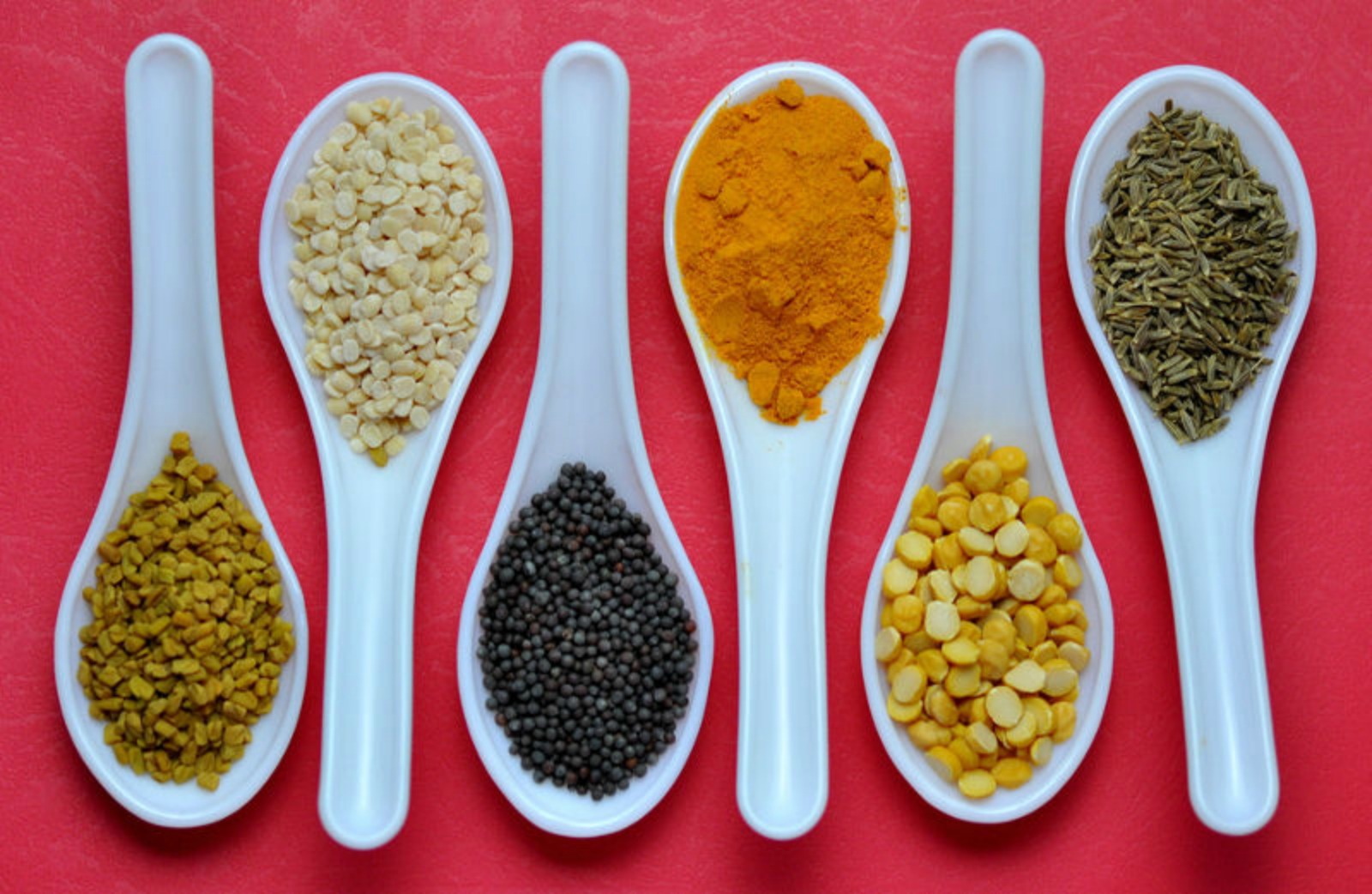 Spices are my favorite part of cooking. You can have all the ingredients in the world but it’s the spices that bring out their natural flavors and bring a dish to life. Spices add flavors, whether it’s salty, sweet, smoky or spicy. They add beautiful aromas that make us hunger for the food and also let us recognize the type of cuisine. In some cases, spices, such as turmeric, paprika and saffron, can change or enhance the color of food and make it look as delicious as it tastes.

Most home cooks know about the five basic tastes and flavor profiles of food – bitter, salty, sour, sweet, and umami or savory. Spices, however, do not fit into just one flavor profile. A spice can be nutty, spicy and earthy at the same time. In fact, there are 15 identifiable flavor characteristics for spices – bitter, cooling, earthy, floral, fruity, herbaceous, hot, nutty, piney, pungent, sour, spicy, sulfury, sweet and woody – and spices may fall into more than one category. Salty is not a flavor profile for spices since individual spices are not salty. By knowing a bit about the flavor profiles of spices, it’s easier to decide which to use in specific dishes as well as which other spices each pairs with. Here we make it simple in the ultimate guide to spices with flavor profiles, spice pairings, ideas for use and recipe links. For herbs, check out The Essential Guide to Herbs.

Allspice is earthy and sweet. It pairs well with cardamom, ginger, nutmeg, cinnamon, mace and cloves. It is often seen in Jamaican, Caribbean and German cuisine. Use it with apples, beets, cabbage, carrots, squash and sweet potatoes. Add it to stews, pickles, breads, soups, and desserts. Try allspice in this Jamaican Curried Tofu with Chickpeas and this Seasonal Strawberry Rhubarb Pie.

Cardamom is warm and sweet. It is often used in Indian cuisine. It pairs well with cinnamon, ginger, cumin and turmeric. Use it with lentils, rice, carrots, squash and sweet potatoes. Add it in rice dishes, curries, desserts, and Chai tea. Use cardamom in these Cardamom Rose Cupcakes, Raw Cacao and Cardamom Cream Tartlets, and Cardamom Apple Cookie Crumble.

Cinnamon is both earthy and sweet. It is used in Indian, Caribbean, Spanish, Mexican and Greek cuisine. It pairs well with allspice, cloves, nutmeg, mace and ginger. Use it with carrots, apples, pears, sweet potato, squash and chocolate. Add it to breads, desserts, fruit, oatmeal and curries. Make Banana French Toast with Cinnamon Apples, Raw Cinnamon Chocolate Truffles, and Vegan Cinnamon Rolls.

Cloves are earthy and sweet. They are often seen in Indian and Caribbean food. Cloves pair well with cinnamon, allspice, nutmeg, mace and basil. Use it with apples, beets, squash, and sweet potatoes. Add them to soups, desserts, breads, curries and chutneys. Try cloves in this Beef-Style Vegan Stew with Gremolata and Vegan Spiced Shortcrust/Speculaas Cookies.

Coriander is earthy and peppery. It is used in Spanish, Mexican and Indian cuisine. Coriander pairs well with chili powder, cumin and cinnamon. Use it with onions, bell peppers, tomatoes and potatoes. Add it to curries, soups, sauces, chilis, and marinades. Try Jicama Burgers with Coriander, Cumin, Dill and Lemon, Spicy Eggless Coriander Quiche, and Grapefruit Coriander Fennel Bites.

Fennel is sweet and tastes like licorice. It is often used in Italian cuisine. Fennel pairs well with garlic, oregano, and red pepper flakes. Use it with tomatoes, eggplant, potatoes, oranges and beets. Add it to vegan sausages, tomato sauce, pasta and breads. Try this Beet, Fennel and Lime Pate, Sauteed Spinach in Tomato Fennel Sauce and Arugula Fennel Salad with Creamy Lemon Dressing.

Ginger is warm, sweet and spicy. It is used in Asian, Indian, Caribbean and Middle Eastern cuisines. Ginger pairs well with cinnamon, nutmeg and garlic. Use it with citrus, beets, carrots, sweet potatoes and squash. Add it to marinades, tea, desserts, stir-fries and curries. Savor ginger in this Warm Ginger Carrot Soup, Asian Ginger Tofu and Carrot Rice with Bok Choy, and Raw Gingersnap Cookies.

Nutmeg is warm, nutty and sweet. It is used in Indian, Caribbean and French cuisine. Nutmeg pairs well with cinnamon, cloves and allspice. Use it with fruits, vegetables and dark leafy greens. Add it to rice, sauces, greens, desserts, tea and nog. Use nutmeg in this Baked Spinach with Vegan Ricotta and Nutmeg Dip, Ultimate Vegan Stuffed Mushrooms, and Spiced Whipped Coconut Cream.

Paprika is warm and sweet. It is used in German, Hungarian, Spanish and Mexican cuisine. Paprika pairs well with garlic, chili powder, cumin, cardamom and cinnamon. Use it with potatoes, broccoli and greens. Add it to goulash, chili, stews and tacos. Use paprika in this Vegan Goulash, Spicy Italian Vegan Sausages, and Lentil Meatloaf with Smoked Paprika Glaze.

Peppercorns are hot and can be pungent. They come in black, white, green and pink. Pepper is seen in every cuisine. It pairs well with all other spices. Use it with greens, tomatoes, strawberries and potatoes. Add it to salads, stews, soups and all dishes. Use them in this Spicy Mushroom Stir-Fry with Black Pepper, Chives and Garlic, Quinoa Stuffed Bell Peppers, and Kraut Stuffed Pretzel Cannoli.

Saffron is slightly bitter, warm and sweet. It is often used in Spanish, Indian and North African cuisine. It adds color as well as flavor to dishes. Saffron pairs well with cumin, vanilla and cinnamon. Use it with light vegetables such as cauliflower and onions, almonds, grains and rice. Add it to risottos, pilafs, paellas, stews, custards and cookies. Use saffron in this Saffron Risotto with Butternut Squash, Asparagus and Saffron Biryani, and Summer Fresh Mango-Saffron Popsicles.

Want to learn more about spices? Read How to Stock Your Spice Cabinet for Delicious Vegan Cooking, 10 Essential International Spices for Any Kitchen, How to Make Your Own Spice Blends and How to Add Ethnic Flavors to Dishes.

Lead Image Source: How to Stock Your Spice Cabinet for Delicious Vegan Cooking