If we had to choose one food that represents comfort on a plate — potatoes would win hands down every single time. There’s scalloped potatoes, crispy potato skins, creamy mashed potatoes, roasted potatoes, hash browns, and how could we forget? — fries!  In short, there’s nothing better than a steaming plate of potatoes, no matter the shape or form. Which is why we nominate it as fall’s favorite starch. With the 368 million tons of potatoes produced worldly every year, we don’t think anyone will disagree.

Even though potatoes are a time-honored staple in the American diet, the total scope of their benefits remains poorly recognized. That’s a shame because potatoes are not only tasty, they’re a total nutrition powerhouse!

There are more than 100 varieties of potatoes cultivated in the US alone and each one of them has a unique taste, use, and health benefits. While we can’t tell you what those are for each and every one of them, we can explore the characteristics and uses of some of the main potatoes you can find at the market. 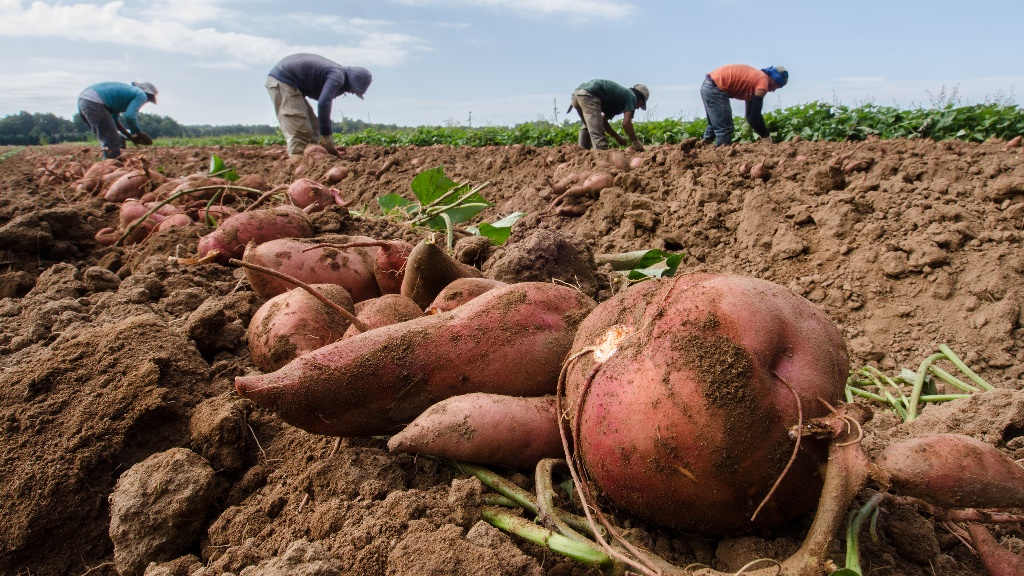 There are many reasons why we should try to buy organic produce in general but in the case of potatoes, it should be a given.  Since they grow directly in the soil (potatoes are tubers), they absorb pesticides, fungicides and other nasty chemicals that we don’t want. Potatoes grown organically also provide us with more nutrients and health benefits. In fact, they have been shown to contain overall a higher level of phytochemicals, ascorbic acid, and antioxidant activity than their conventional counterparts do, no matter the cooking method used. If you can only get conventional potatoes, don’t fret. Those also contain a lot of vitamins, minerals, and antioxidants — only less so.

In short, organic potatoes are worth the extra money if you can splurge it. 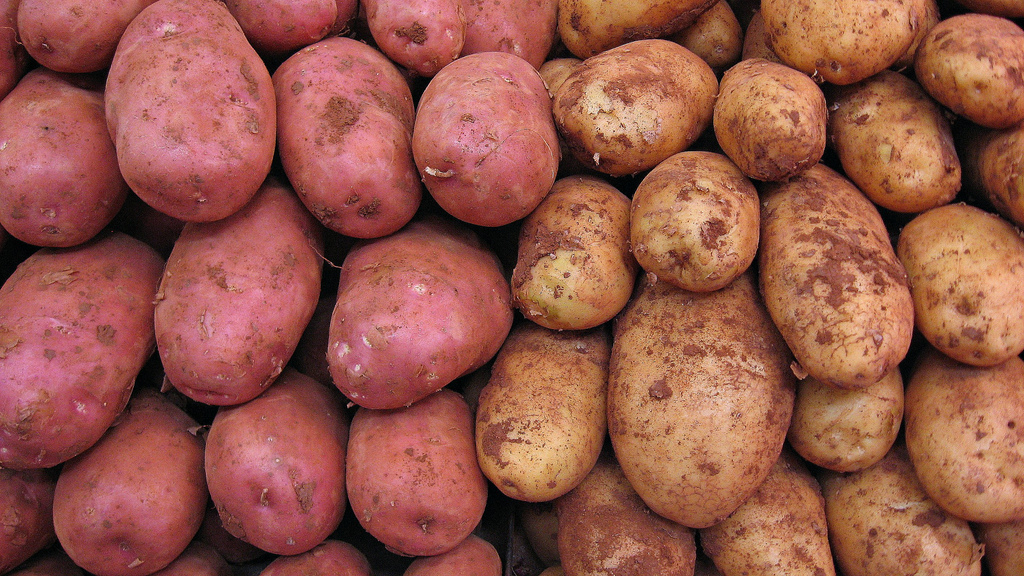 Potatoes are usually classified by their starch content. Varieties like the classic Russet or Idaho are considered higher in starch and low in moisture. This makes them a great candidate for either frying, baking or boiling. They tend to fall apart as they cook so they’re not the best for dishes like potato salads, casseroles, and gratins.

On the other hand, waxy potatoes like red potatoes, fingerlings, and new potatoes are perfect for such uses. Their low starch contain ensures that their shape holds up even after they’ve been cooked.

Lastly, all-purpose potatoes of which yellow potatoes like the Yukon Gold and purple potatoes can be described as, can go in any dish. Their versatility makes them a great buy when you’re unsure of what you’ll cook next. 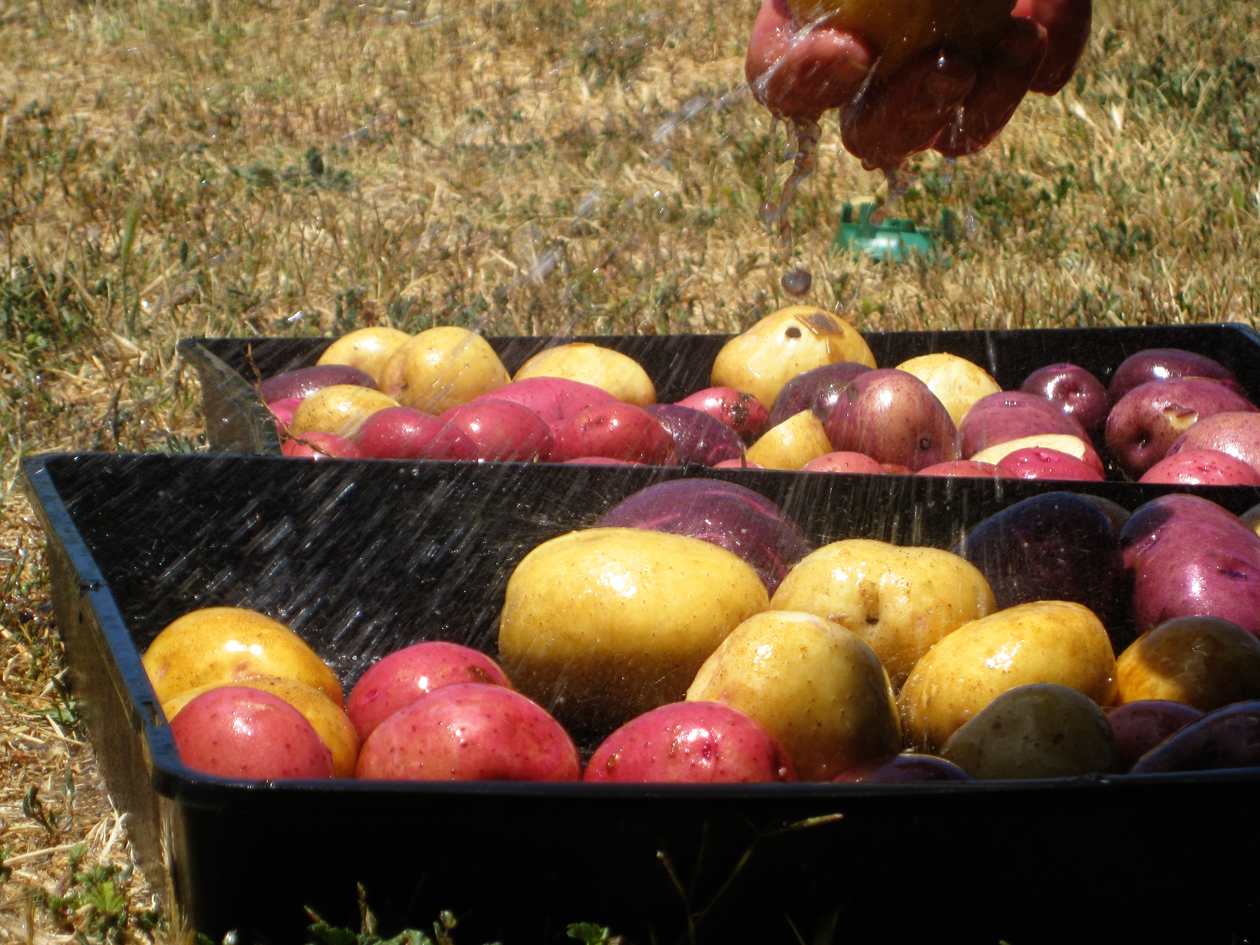 As mentioned, there are more than 100 varieties of potatoes cultivated in the US alone but these six types of potatoes are among the most commonly found: 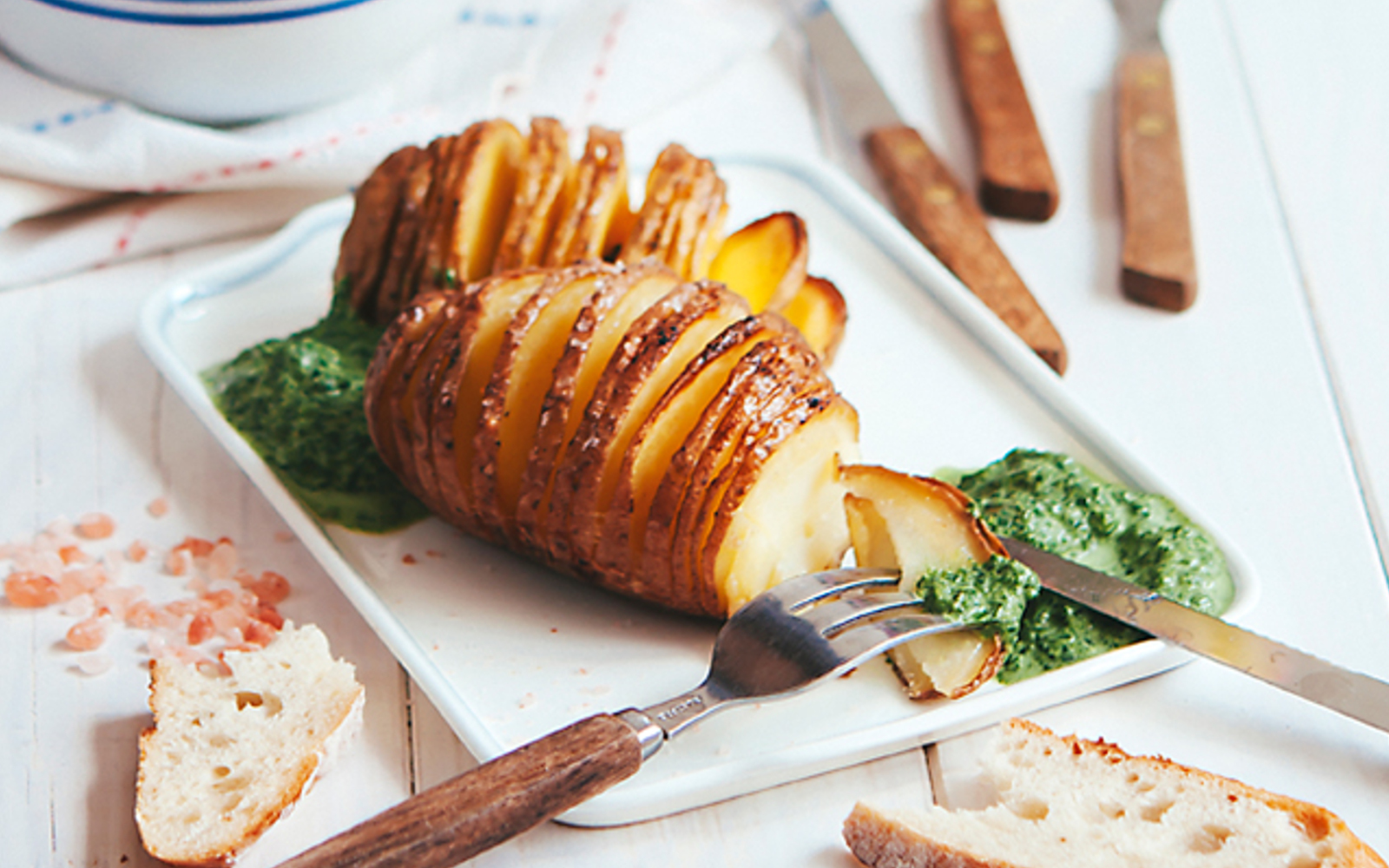 This potato is perhaps the most famous of all and that’s not without reason. Russets are the number one go-to for the classic mashed potatoes and for making fries. Their fluffy and soft texture soaks up butter, broth, and creamy milk perfectly, which makes them an incredibly flavorful addition to dishes. 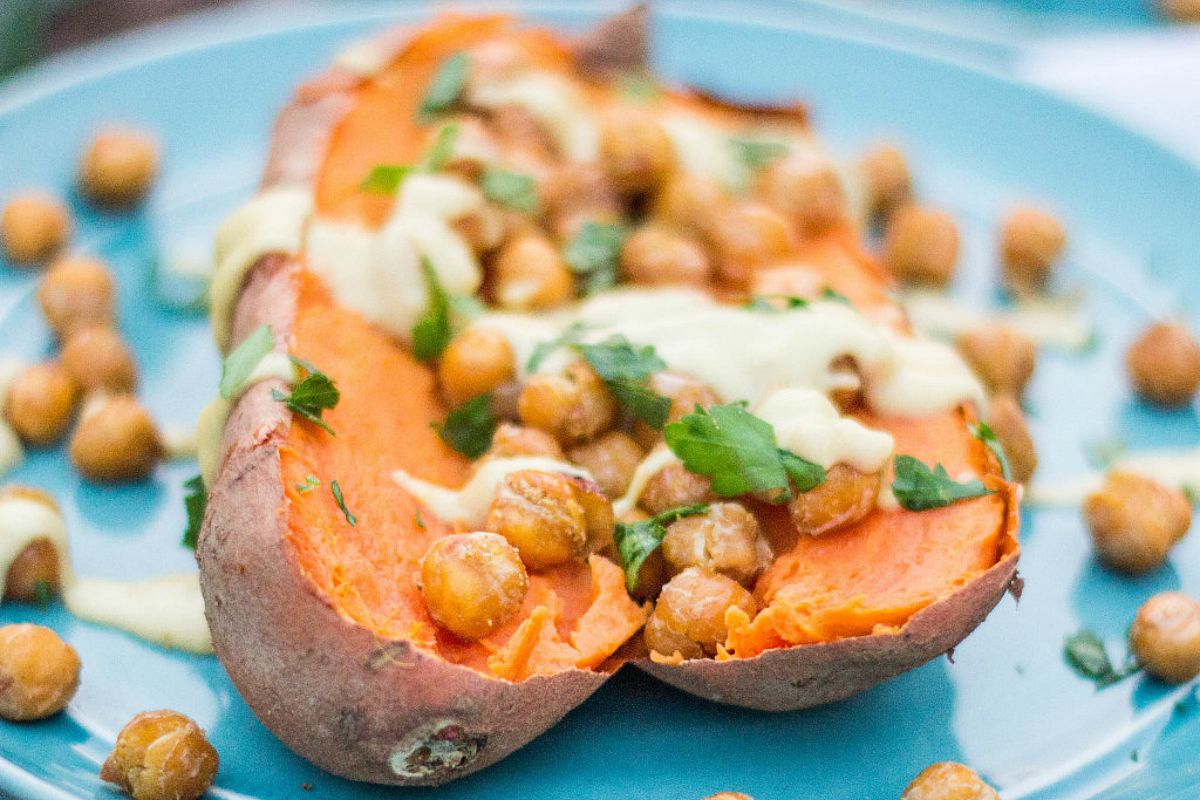 Sweet potatoes are one of the most popular fall starchy foods — probably because their starch content and beautiful orange color makes them a comforting, yet vibrant addition to meals. They’re also incredibly nutritious as they’re a good source of b-vitamins, folate, riboflavin, and fiber. 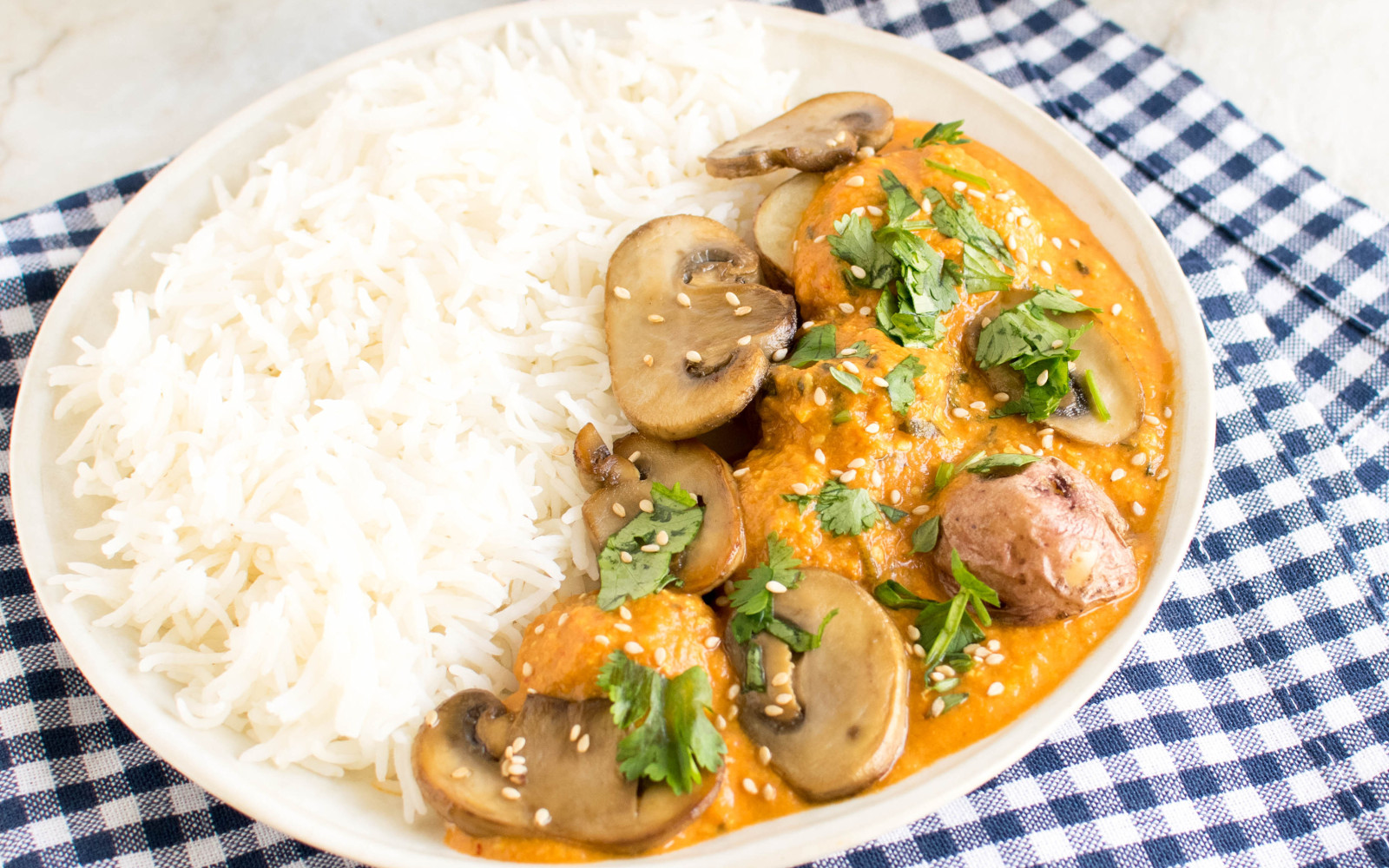 Red potatoes are the best kind of potatoes to use in gratins, scalloped potatoes dishes, and potato salads because their low starch content means they keep their shape through cooking. You can use them whole, leaving the skin intact because of their nice waxy texture. Simply scrub them clean before using them in your favorite dish. 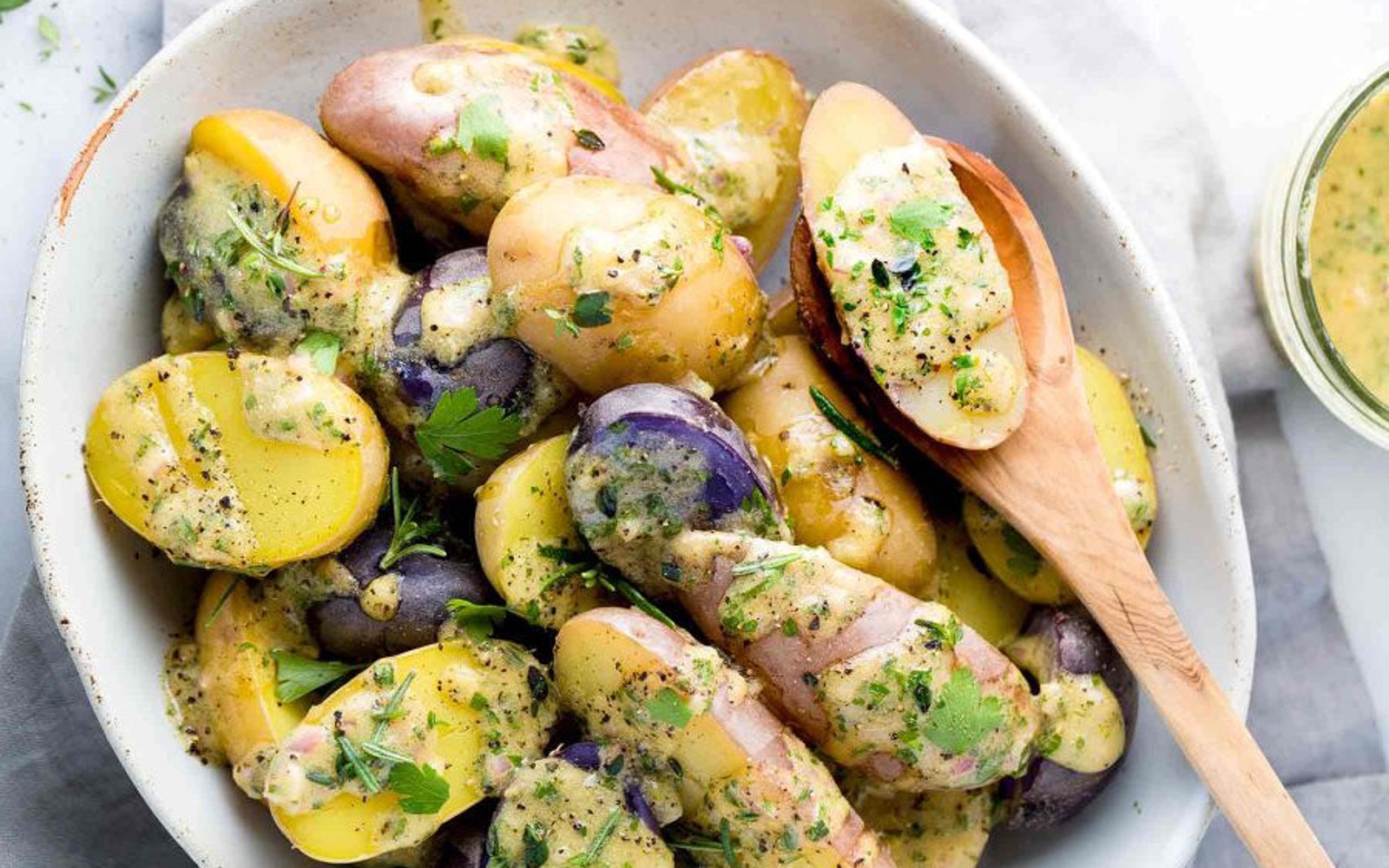 Fingerling potatoes may resemble fingers but don’t let that put you off, they’re incredible. Their flavor can be described as nutty and earthy while their creamy yellow flesh has a nice moist texture, which makes them a great addition to potato salad dishes. Fingerlings are awesome for baking, roasting, and boiling too. 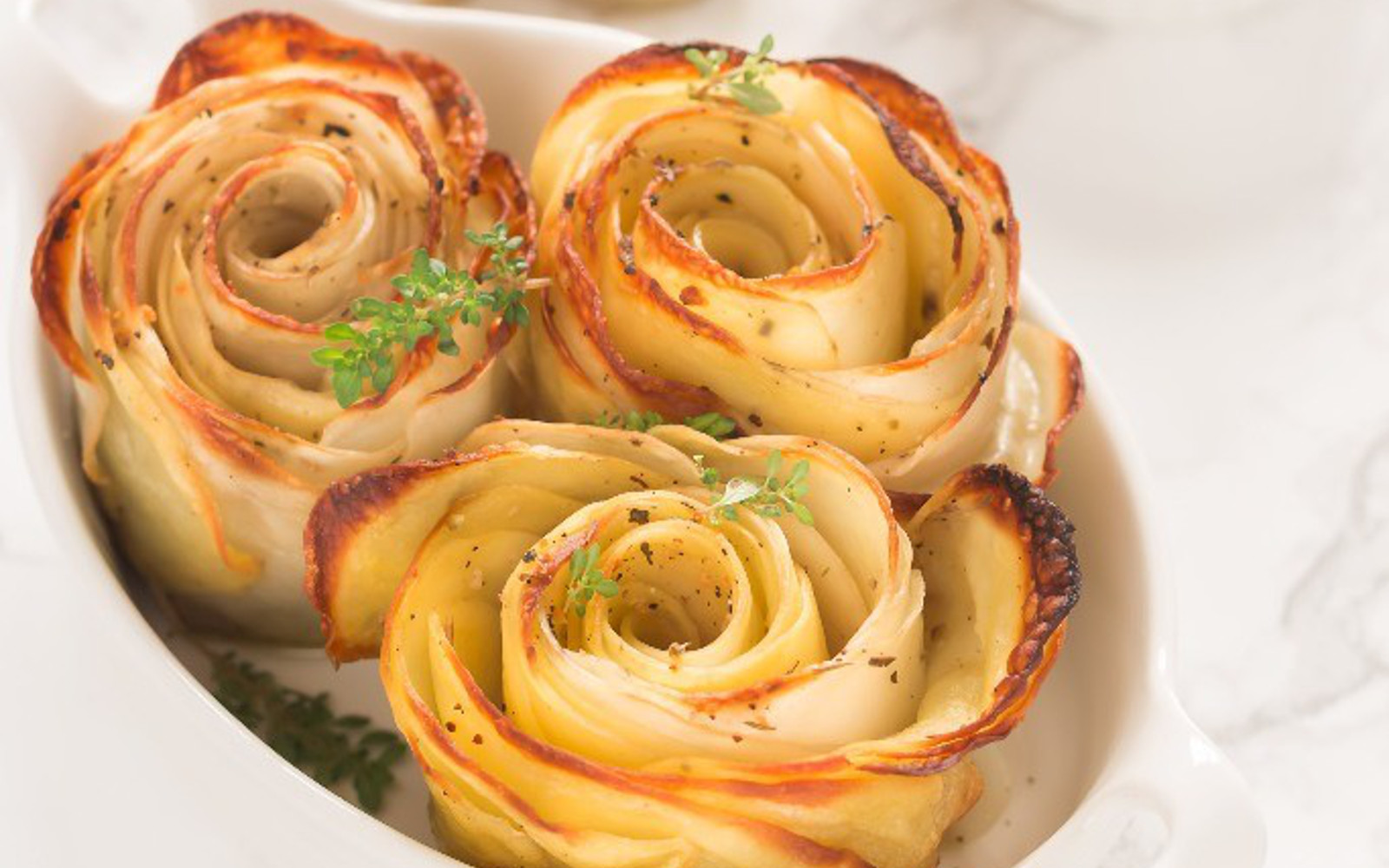 These potatoes are aptly named because of their golden yellow moist flesh. Their slightly sweet taste and smooth texture makes them perfect for mash potatoes, boiling, baking or making delicious crunchy fries. They will fall-apart if you overcook them so watch out for that. You can use these all-purpose potatoes to create dishes like this Tempeh Shepherd’s Pie, Garlic Scape Pesto Potato Crust Pizza, Chile-Garlic Potatoes and Cauliflower With Turmeric and these amazing Ketchup Baked Home Fries. 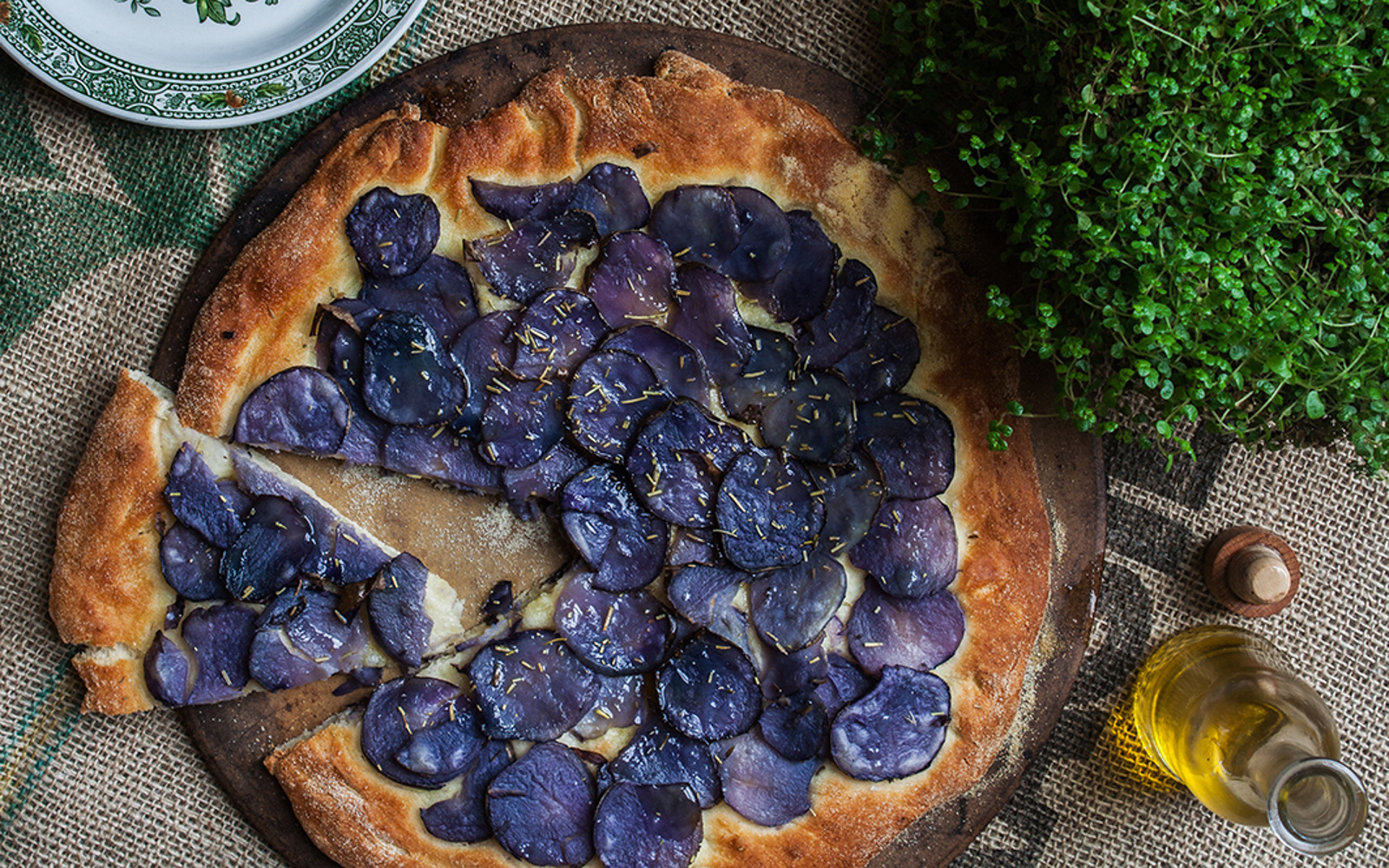 These potatoes fall in the all-purpose category with their medium starch content. As such they are good for roasting, frying, grilling, boiling, and even steaming. Purple potatoes are quite striking with their deep purple skin and flesh, which makes for visually incredible dishes. Their nutty and buttery flavor truly shines in dishes like this Rosemary Purple Potato Focaccia, Hearty Purple Potato Stew, Purple Mac and Cheese and this Cheesy Purple Potato Tart.

Potatoes get a bad rep as being a caloric and nutrient-devoid food but that is actually very far from the truth. Potatoes are carbohydrate-rich, low in fat and they provide us with sustainable energy because of their fiber content. They’re also incredibly rich in b-vitamins, vitamin C, zinc, iron, folate, and they actually contain more potassium than a banana. Potatoes are filled with antioxidants as well which makes them not only a nutritious vegetable but also one that can prevent diseases and keep your immune system strong.

Let’s take a look at some of the potato’s health benefits: 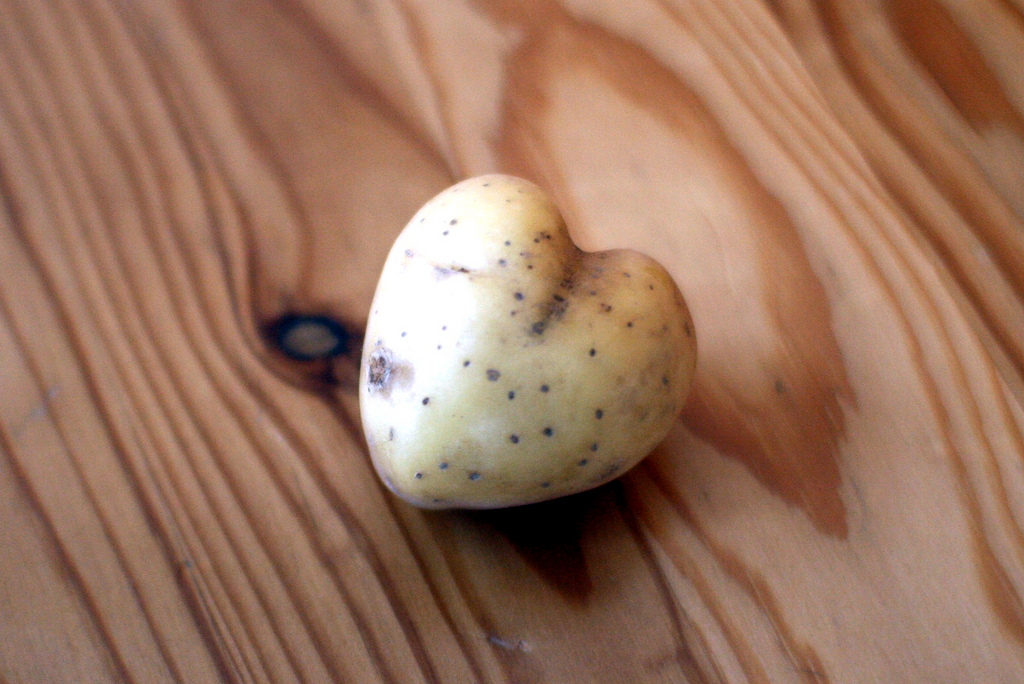 Did you know that boiled potatoes were classified as one of the most satiating foods you can eat — over other carbohydrate-rich foods, protein-rich foods, fruit, cereal and baked goods? That’s really no surprise, potatoes are rich in starch and fiber, which contributes to us feeling full and satisfied. This characteristic makes the potato a great food for weight management. If you skip the butter and salt that is!

Potatoes have also been found to protect against cardiovascular disease because of the carotenoids they contain. This powerful phytochemical is mostly found in sweet potatoes to which it gives its beautiful orange hue. Carotenoids have free radicals scavenger properties and they improve low-density lipoprotein cholesterol resistance to oxidation. In other words, eating potatoes that contain a high level of those phytochemicals (such as bright colored potatoes) can make you heart attack proof. 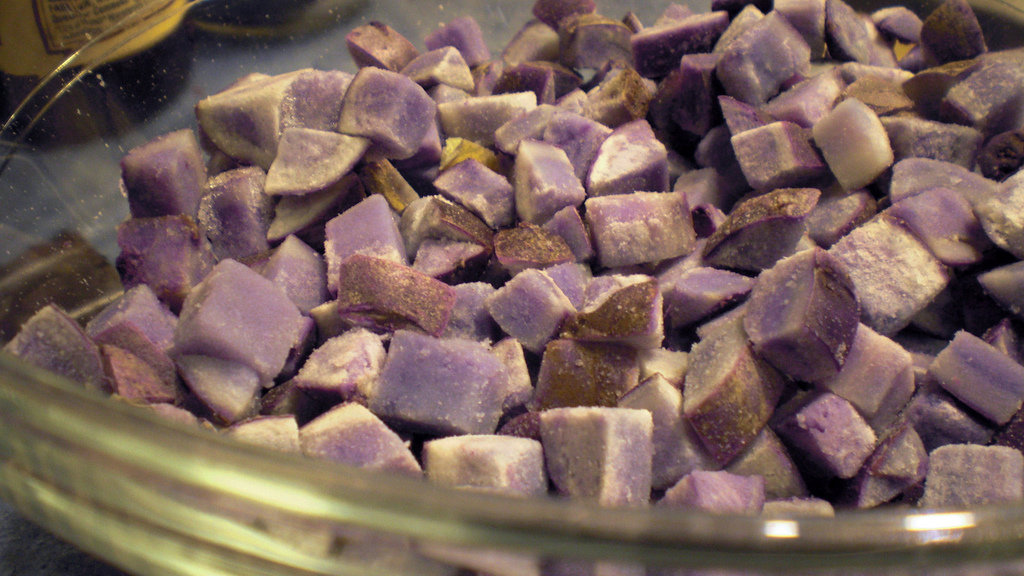 If you thought that only greens were a good source of antioxidants, you’re way wrong. Potatoes are full of healthy phytochemicals such as phenolic acids, carotenoids, and anthocyanins. These compounds have all been found to decrease oxidative damage and inflammation in our bodies. A diet rich in antioxidants can help you ward off diseases like cancer, autoimmune diseases, and diabetes while keeping your immune system strong and delay aging.

If you want to reap all the anti-inflammatory benefits, choose potatoes with colored flesh like purple potatoes, sweet potatoes and yellow potatoes as they are the most antioxidant-rich varieties. 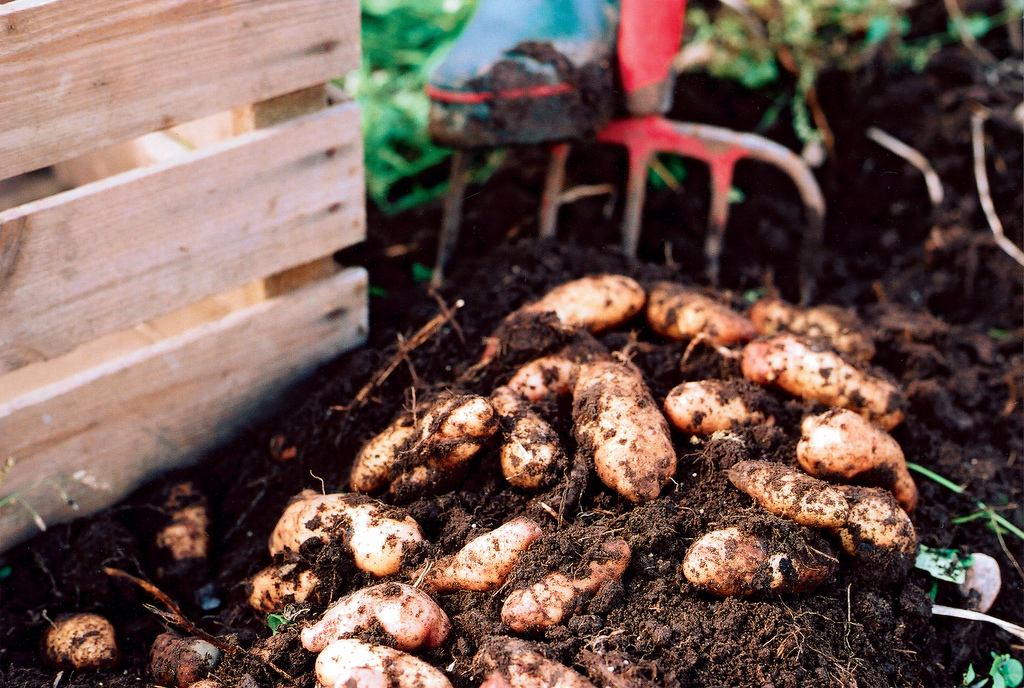 As mentioned, potatoes are rich in antioxidants that can protect you against many forms of cancers. Studies have shown that the anthocyanin content found in potatoes has powerful anti-cancer properties. Bioactive compounds called alpha-chaconine and gallic acid present in potatoes are also anti-cancer agents as they decrease survival of cancer cells. Last but not least, chlorogenic acid, another compound inside potatoes was shown to reduce carcinogenesis in breast cancer tissue.

In short, consuming potatoes can prevent colon cancer, prostate cancer, and breast cancer among many others. Who would’ve thought? 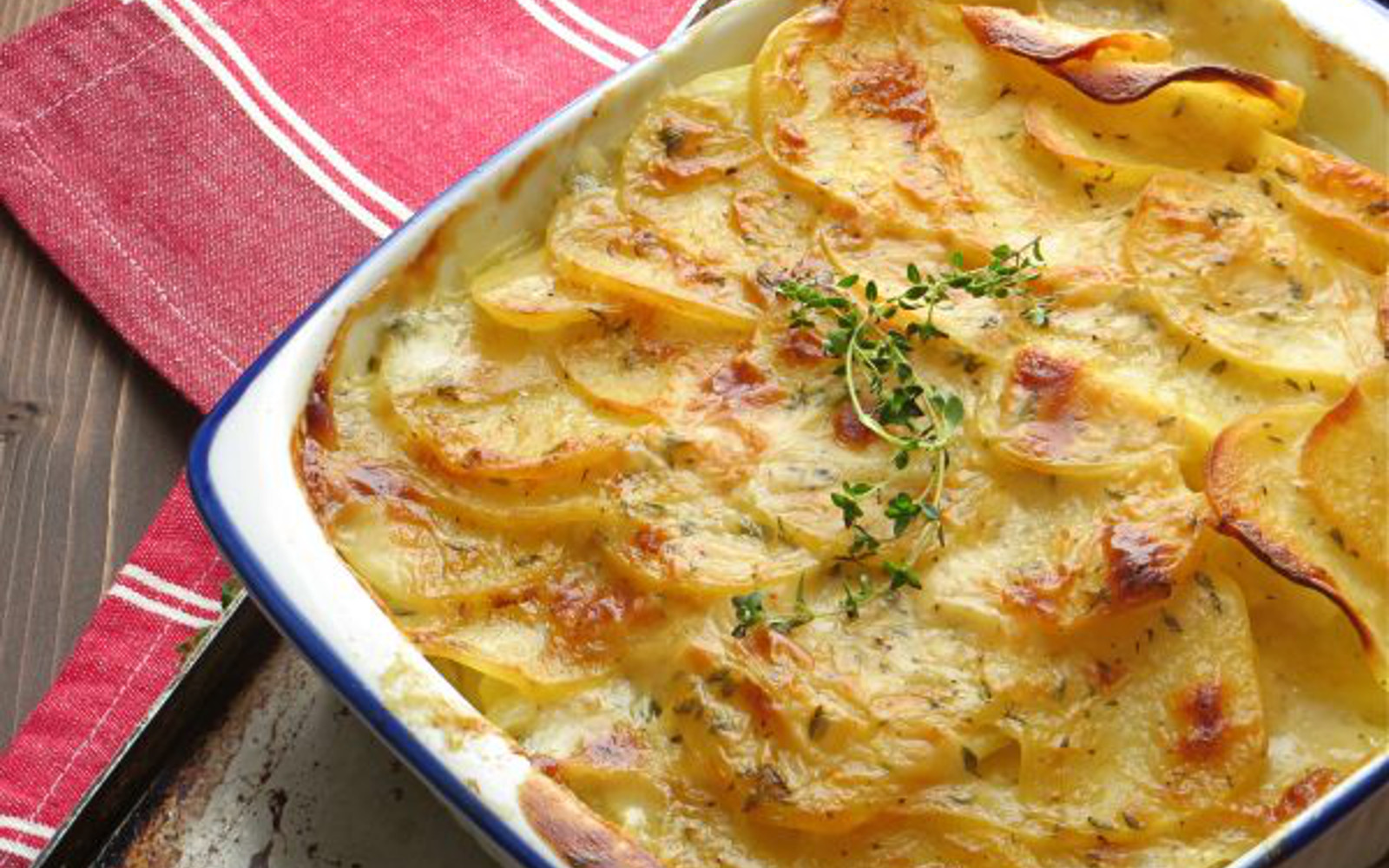 Now that you know more about the many health benefits and uses of the potato, here’s some recipes and further reading that might interest you:

If you’re on the hunt for even more vegan recipes that feature the almighty potato and other fall starches, then we highly recommend downloading our Food Monster App, which is available for both Android and iPhone, and can also be found on Instagram and Facebook. The app has more than 8,000 plant-based, allergy-friendly recipes, and subscribers gain access to ten new recipes per day. Check it out!