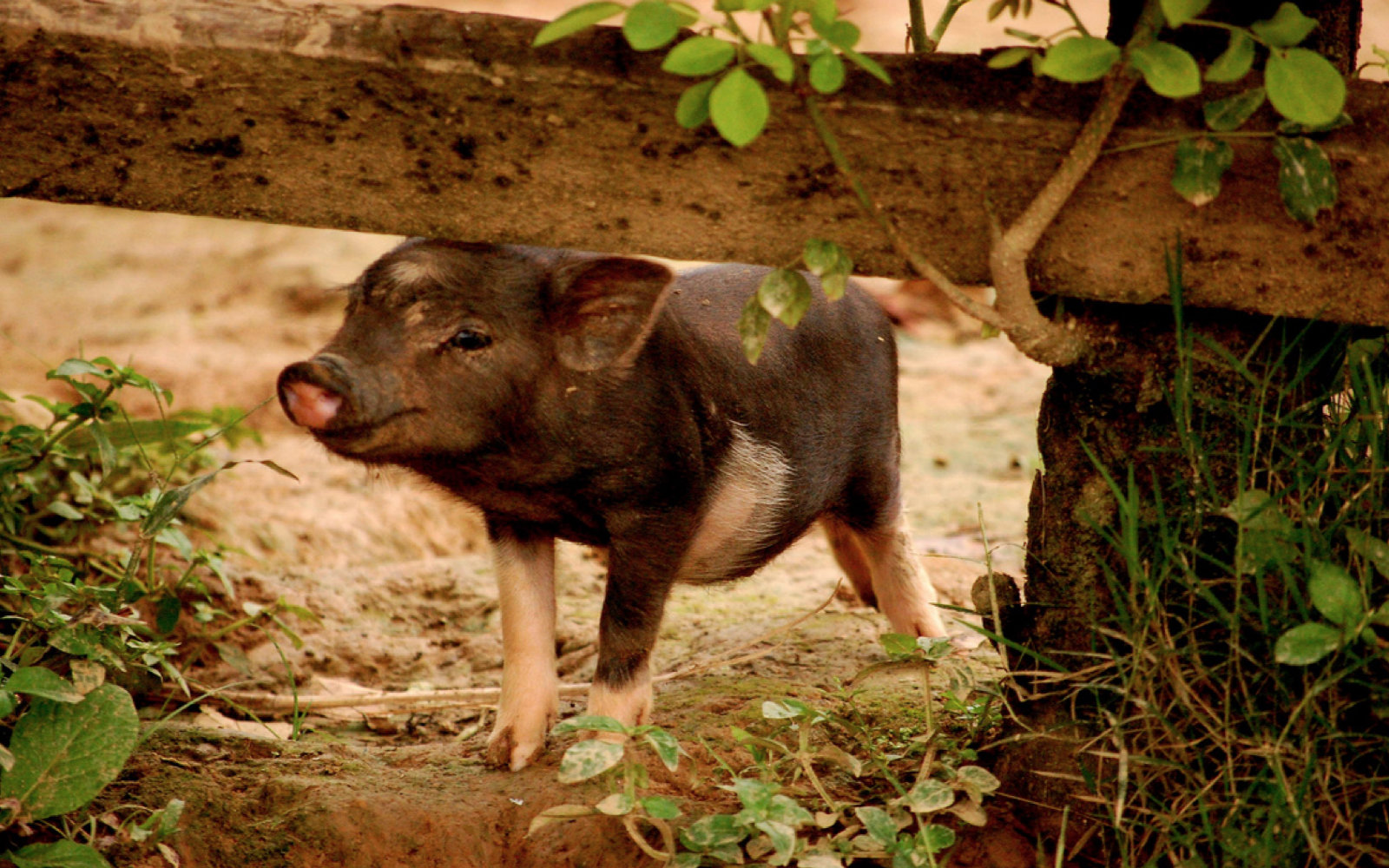 Watch a movie like “Charlotte’s Web” or “Babe” and people will sympathize and root for the pig. They will hope that the pig in jeopardy will escape slaughter and get to live. Yet those same people will also declare that “everything is better with bacon,” eat ham and other pork products, and even have whole pig roasts at their parties and wedding receptions. How can it be that the same people who loudly exclaim “aww” at the sight of animated and real piglets might sit down to a meal of suckling pig?

Sadly, I was once one of those people. Every meal I ordered, I asked for extra bacon. Later in life, I grew to love sausages and spare ribs. But six years ago, when I sat down to watch a video of what farmed animals go through to get on our plates, it was the sight of tortured pigs that made me cry the most. Though I had to turn my head away several times, the images never left my mind, and from that day on, I have not eaten one bite of meat. When I visited farm animal sanctuaries, I got to get up close and personal with pigs. They were huge and had trouble moving from the way they were bred but they were gentle, kind, and loving. I was humbled to be in their presence. One even played with me, knocking me over with his snout when I squatted down next to him.  In the Chinese zodiac, the pig represents fortune, honesty, and happiness. How appropriate for this honest, happy animal that is smart, lovable, and forgiving. Here are just 10 of the reasons (among many!) to love pigs.

1. Pigs are Super-Smart and Remember Everything 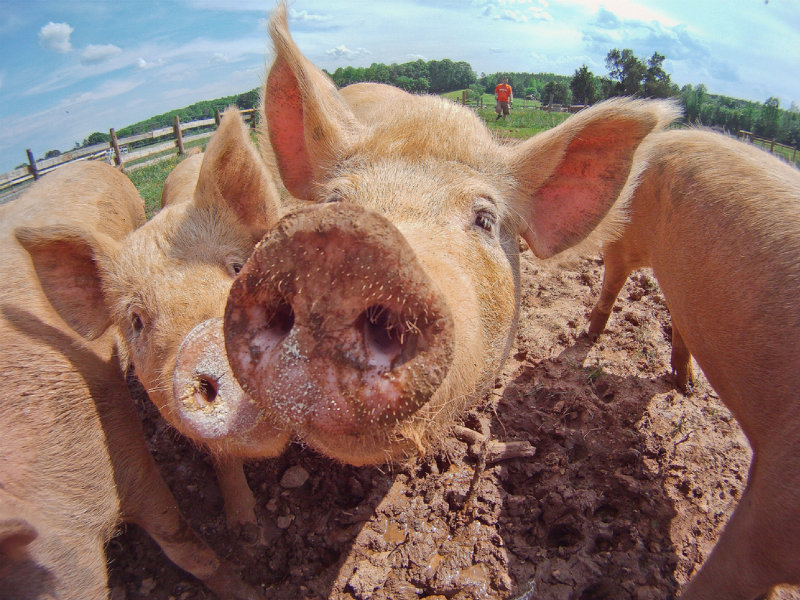 Scientists have determined that not only are pigs smart, they are smarter than dogs, some primates and 3-year old children. They are ranked as the fourth most intelligent creature on earth. Their level of cognitive ability allows pigs to play joystick-controlled video games, have abstract thought, use tools, recognize their own names, dream, and follow commands.

Pigs can use mirrors to locate food that is not directly visible, a task only a few other animals such as dolphins, elephants, and chimps, can accomplish. Pigs can be taught to sit, jump, fetch, and catch Frisbees. A researcher at the University of Illinois found that pigs learned how to control the thermostat of their barn to adjust the temperature to their liking! Their ability to understand how other pigs think allows them to use deceit and purposely mislead other pigs to the wrong trail so they can keep more food for themselves. That’s tricky!

Pigs have excellent memories. Studies have shown that pigs can remember where food is stored and places where they have found food before. They can also remember directions and can find their way home from great distances. Pigs can recognize and remember humans and up to 30 other pigs. I guess not all pigs look alike!

2. Cleanliness is Next to Piggy-ness

Many people have this misconception that pigs are dirty animals. In fact, people take the piggy name in vain to insult people they think are slobs, calling them “filthy pigs” and comparing their homes or offices to a “pig sty.”

The truth is that pigs are very clean animals, so clean they can live indoors like dogs and cats as companion animals. Given the freedom to roam and sufficient space, pigs will not defecate near their sleeping or eating areas.

Pigs like to bathe in water though they do take mud baths. Why? Pigs have no sweat glands so they roll around in mud to stay cool and protect themselves from the sun. That’s right; the mud acts as a sunscreen. It also keeps bugs away. So the next time you hear someone say he is “sweating like a pig,” let him know that’s impossible since pigs don’t sweat.

Another misconception people have about pigs is that they eat anything and everything and a lot of it quickly. The truth is quite the opposite. Pigs in the wild spend a long time foraging for food. Their best sense is smell and pigs root for food with their snouts, happy to find a variety of goodies to eat. Given the freedom, pigs can be very picky eaters. They like to have their menu changed up rather than get the same meal day after day. Pigs eat slowly, nibbling, and savoring their food. Pigs do not “pig out” or “eat like hogs” which are more inaccurate phrases people use. 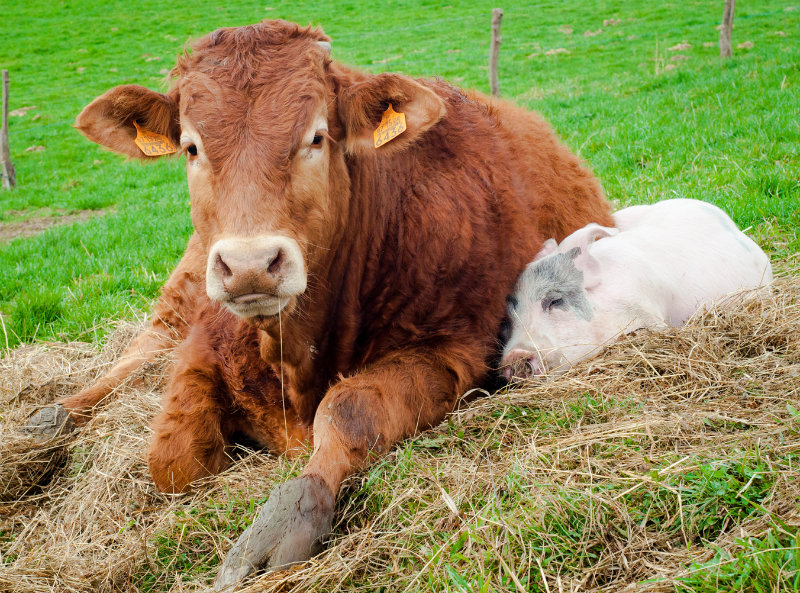 Pigs are extremely social animals. They form close bonds with people and other animals. They love contact and enjoy getting massages. Pigs show affection by grooming each other. They greet each other by rubbing noses (aww!) and enjoy hanging out together, sunbathing, playing and listening to music. Pigs love to sleep together in nests, cuddled up nose-to-nose. Who wouldn’t want to cuddle up to a pig? 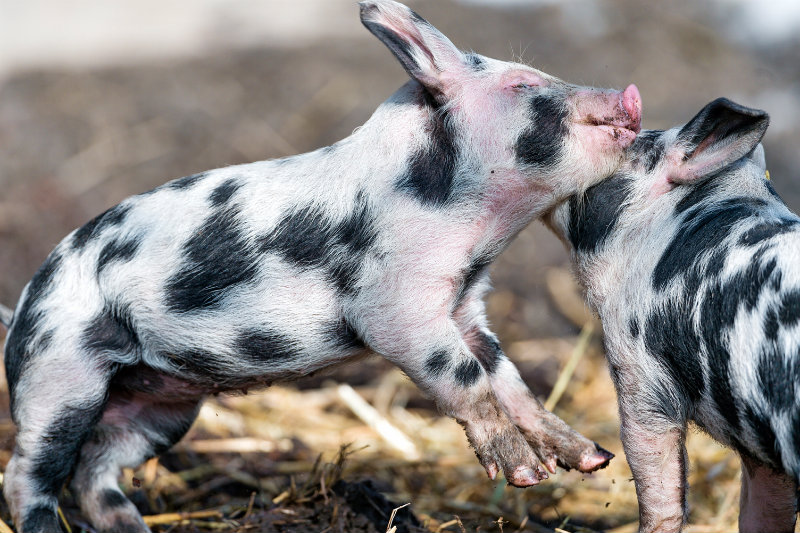 Pigs love to play. Just like for human children, play is an important part of piglets’ social and cognitive development. Pigs like to chase each other, run around, play fight and wrestle and push balls around with their noses, all the while grunting and squeaking (which is piggy laughter). Pigs like toys and will use their imaginations to find a way to play with cardboard boxes, blankets, hay or whatever they find on their explorations. Like children, pigs tend to get bored with the same toy quickly so it’s important to keep them stimulated with different play objects.

Pigs have a lot to say. They communicate constantly with each other and they don’t just say oink. Pigs have a vocabulary of over 20 distinct oinks, grunts, snorts, snarls and squeaks that have specific meanings. They convey their intentions, how they are feeling, warnings, greetings, and when it’s time for dinner. A lactating mother sow has a special call to let her piglets know it’s time to suckle and mother pigs stay in close contact with their piglets through grunts and squeals. Newborn piglets learn to recognize their mothers’ voices. Mother pigs also sing to their piglets while nursing.

Pigs have a matriarchal family unit where piglets are cared for by the female relatives. Pigs are good mothers and develop strong bonds and love for her children, just like human mothers do. In the wild, the mother pig builds a nest for her unborn babies in a place she thinks will be safe for them. Sometimes she will walk over 6 miles to find a suitable place and will give birth to her babies in this secluded area. The mother pig will stay with her piglets for about two weeks before returning to the herd where she will wean her babies and teach them how to survive. Mother pigs get anxious when they are separated from their babies and mourn when they are taken away.

Pigs may not wear capes but they can be superheroes when they need to be. There are many stories of pigs who have faced danger and jumped in to save the day. Pigs have been reported to have saved humans and other animals from drowning, fires, and intruders. One pig flagged down a passing car to help her human companion who was having a heart attack. There are also numerous stories of pigs who manage to escape from trucks bound for slaughterhouses, saving themselves and showing us that pigs, like everyone else, want to live.

9. Pigs Have Personalities and Feelings 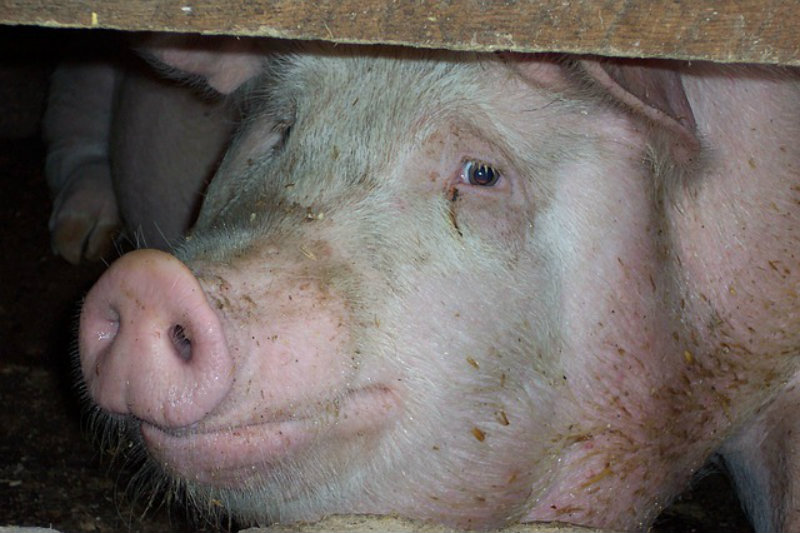 Just like humans, pigs have individual personalities with a wide range of traits and emotions. Some pigs are more playful than others, some are more serious, some are more daring and some are shyer. Some pigs seem to handle stress better than others who may suffer from depression. Pigs experience both positive and negative emotions and can feel happiness, sadness, grief, and pain. Pigs are aware of their suffering and losses.

In fact, pigs are highly sensitive animals and can become quickly bored, anxious, and depressed when confined to cramped spaces and mistreated. Pigs tend to be peaceful animals and only show aggression when they or their young are threatened. Pigs are curious, insightful, enthusiastic, and optimistic animals who like to be entertained and have fun. 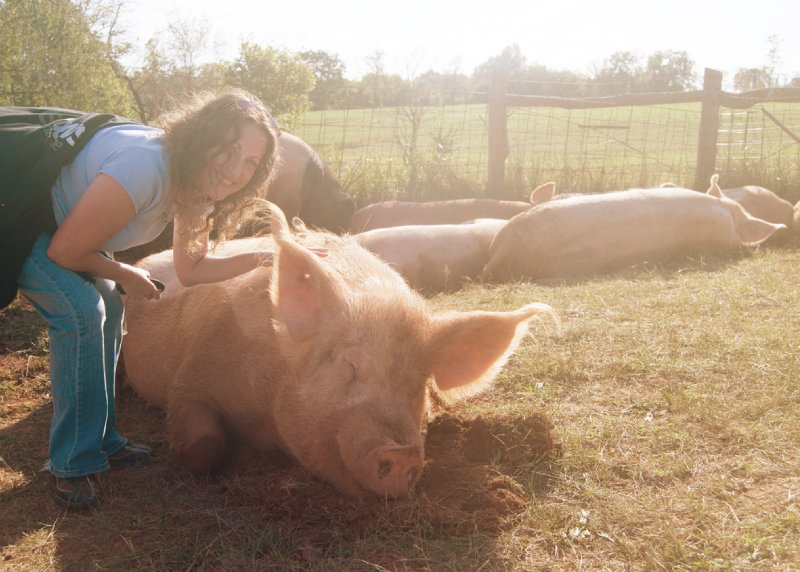 Pigs are compassionate animals who show distress when they see another animal or human suffering. They are also forgiving as anyone who has ever visited a farm sanctuary knows. After being severely abused, rescued pigs learn to trust again and seem to not hold grudges. Even though they may have known horrible pain and loss at the hands of humans, they welcome the gentle touches of people who intend them no harm.

The Sad Reality for Most Pigs

Most of the pigs raised in the U.S. are in factory farms where they are confined and will never get to play, be clean, cuddle with each other, or be picky eaters. The females will be forcibly impregnated, kept in gestation crates, have their babies taken away from them, and eventually be slaughtered. The piglets will be castrated without anesthesia, have their tails chopped off and their teeth pulled out and will never know the protective love of their mothers. All of the pigs will be kept in crowded, dirty conditions with no ability to move. They will be fed poor food and drugs to make them grow so big they won’t be able to walk. Even in the best conditions of the friendliest farm, pigs raised for food will be killed and not allowed to live to their natural lifespan with their families in peace.