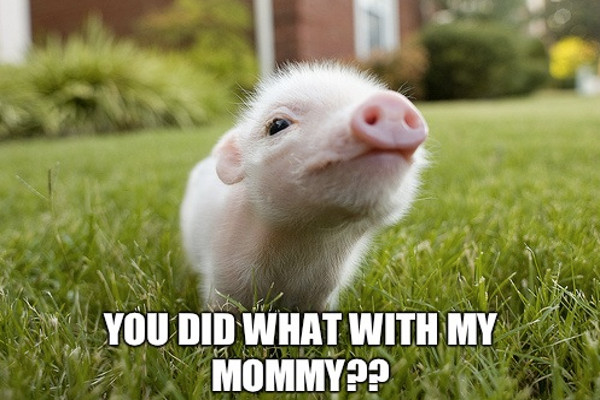 To all the animal lovers out there, it feels safe to say that farmed animals – namely chickens, cows, and pigs – are capable of feeling pain and thus should not be eaten. Unfortunately, this argument has still yet to win over the hearts of most Americans, and has led to the slaughter of almost 9 billion animals in the United States in 2012 alone. While all animals deserve the right to life, it’s most surprising to me that humans still chose to eat pigs. Perhaps it is because many are unaware of the incredible intelligence of these sentient beings and their capacity to form meaningful social bonds. For all of you unaware of the greatness of pigs, hopefully I can convince you to see pigs as friends and not as bacon.

Video games aren’t just for your younger brother! While using a joystick meant for chimpanzees, pigs have been shown to move a cursor into a blue area on a computer screen, which then gives them a reward for their task. After over a year of trying, dogs were not able to successfully complete the task at hand. In fact, many claim that pigs are more intelligent than dogs and even two-year-old humans. Their intelligence, unfortunately, also leads to intense boredom when kept in confinement in gestation crates on factory farms. This often makes pigs engage in stereotypic behaviors such as biting on their metal bars or chewing with an empty mouth – basically, they go insane. European regulations actually require that pig farmers provide mentally stimulating activity for pigs to reduce boredom, but U.S. regulations are lacking and because of it pigs are suffering.

The mirror test – an experiment developed in 1970 by psychologist Gordon Gallup Jr to measure self-recognition – has been passed by very few non-human animals. Even children are not capable of passing the mirror test until they are about two years old. Dogs and cats never have and probably never will be able to pass. Great apes, bottlenose dolphins, elephants, and magpies, however, show their capacity for self-awareness by passing the mirror test.  But what about the pig? A study done at the University of Cambridge seems to show that pigs are capable of understanding that it is not a foreign pig they are looking at in the mirror – something most animals are not capable of moving beyond. Generally, non-human animals who see themselves in a mirror will react to their reflection as if it is an animal they have never seen before. Pigs also show an understanding of how mirrors work by using the reflected images to search their surroundings to find food. What clever pigs!

For centuries, pigs have been stuck with the stereotype of being dirty animals. To pigs advantage actually, Jewish law deems pigs unclean and thus not Kosher and forbidden to eat. But this myth is simply not true. Yes, pigs do roll around in the mud but only because it keeps them cool. Because pigs have very few sweat glands, they use the mud to cool off. The mud is actually more effective at cooling off pigs than a swim in cold water. But when given the opportunity, pigs will refuse to defecate anywhere near living or eating areas. Many pigs confined to gestation crates, however, are not given this opportunity. Gestation crate floors are made of slats, allowing excrement to fall through. This means the pigs live their lives right above their waste, which is an awful way to live.

The story of Wilbur the pig and Charlotte the spider might not be too far fetched after all. Maybe Charlotte’s Web is a bit of a stretch, but pigs are capable of forming lasting bonds with both pigs as well as other species. Pigs are known to constantly communicate with each other and mother pigs even sing to their young while nursing. And as for humans, maybe pigs should be man’s new best friend! There are countless stories of pigs saving their guardians lives in various situations, from heart attacks to house fires. But don’t give up your dogs just yet. Pigs and dogs are actually capable of getting along quite well!

For more information on the various studies mentioned above, please check out the following links: