The Times They are A-Changin’:The Day I Attended a Pig’s Birthday Party 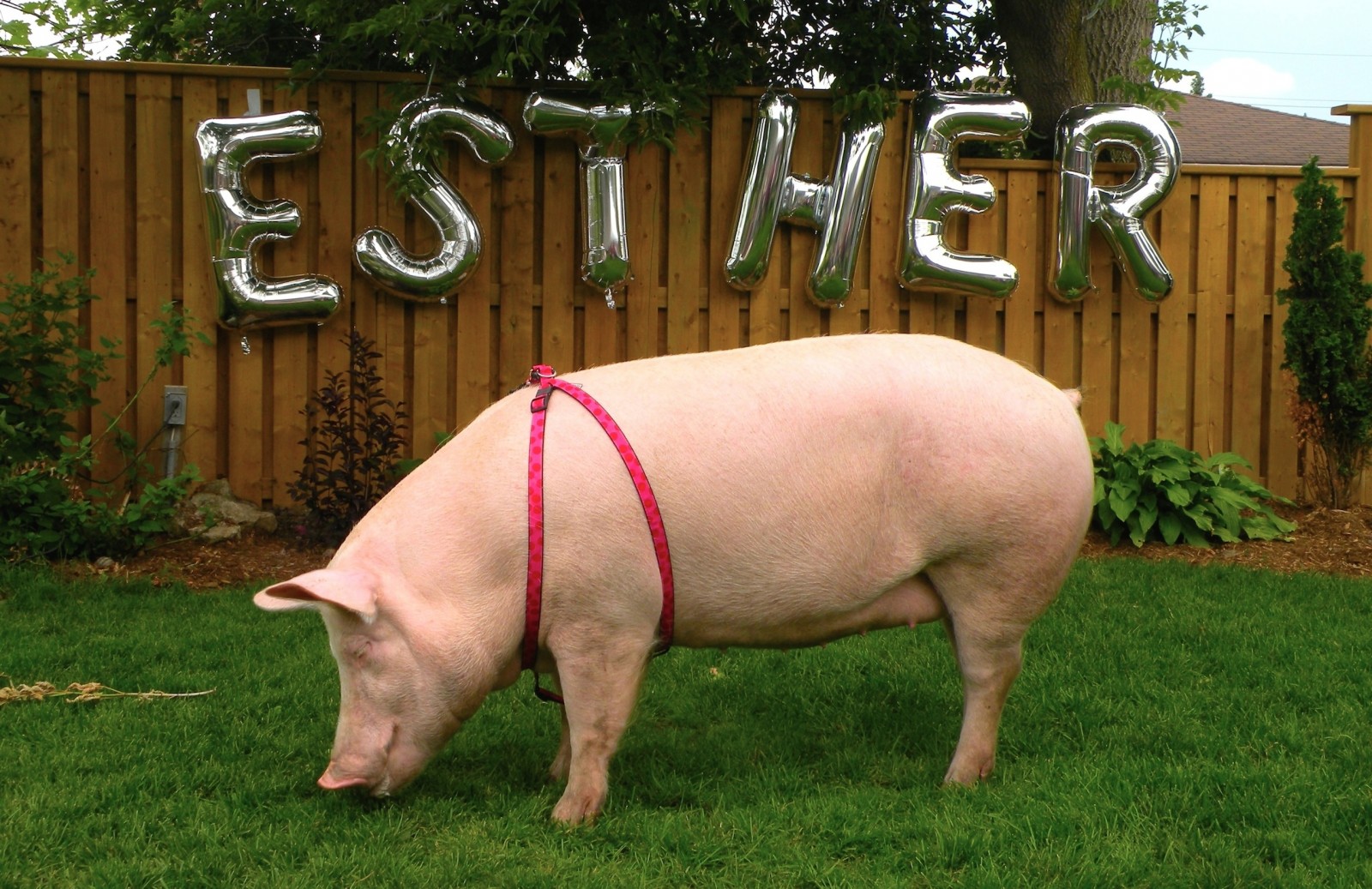 If you had asked me five years ago, I never would have imagined that a commercial pig would become both a friend and a celebrity. Esther the Wonder Pig has warmed the hearts and opened the minds of over 168,000 Facebook fans and countless others across the globe. Her story is simple, yet profound.

Steve Jenkins and Derek Walter of Georgetown, Ontario adopted Esther under the pretense that she was a pet “mini pig” in need of a home. Two years later, and 600 pounds heavier, Esther has grown into a full-size commercial pig, originally bred for rapid growth and an early end.

Despite months of denial about Esther’s expected growth, Steve and Derek seamlessly fell prey to what they affectionately call “The Esther Effect.” They quickly went full swing into accidental activism, became vegan, and made plans to open a sanctuary for farmed animals. The sanctuary is tentatively scheduled to open Spring 2015 in Campbellville, Ontario, located about 45 minutes from Toronto.

It was during their highly successful fundraising campaign that my partner and I entered (multiple times!) to win an invitation to Esther’s second birthday party at Steve and Derek’s home. 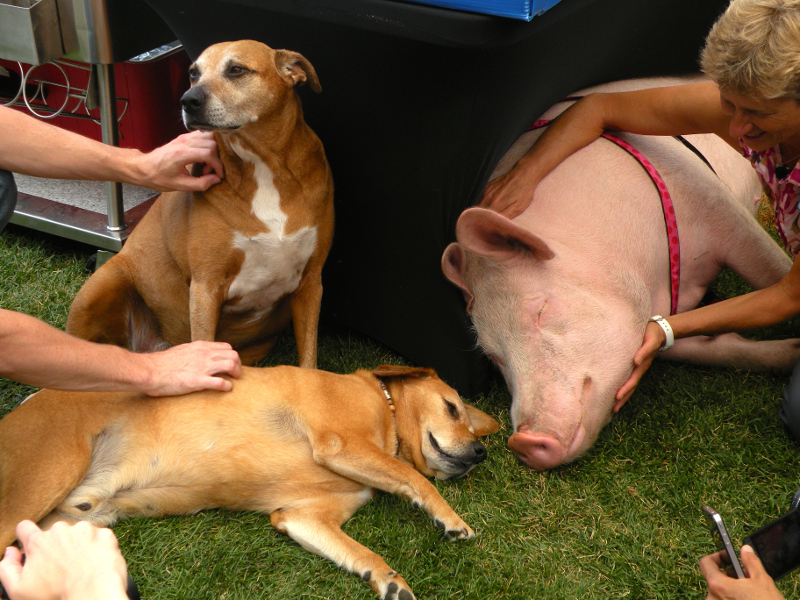 On Saturday, July 26th people traveled all the way from California, Pennsylvania, New York, and throughout Ontario to celebrate all things Esther. Unlike many human social gatherings where companion animals remain quietly in the background, Esther and her canine siblings, Ruben and Shelby, were the main event, with occasional appearances from Delores, a more reclusive feline family member. 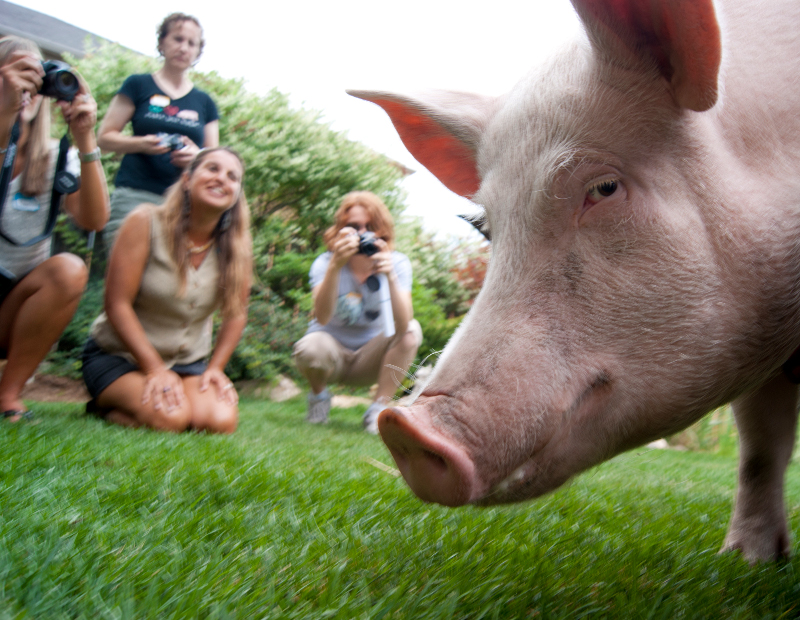 Esther wore a perma-grin for much of the party as she moved between napping, eating copious amounts of fruit and hummus, and enjoying the coddling and cuddling of her swooning guests. 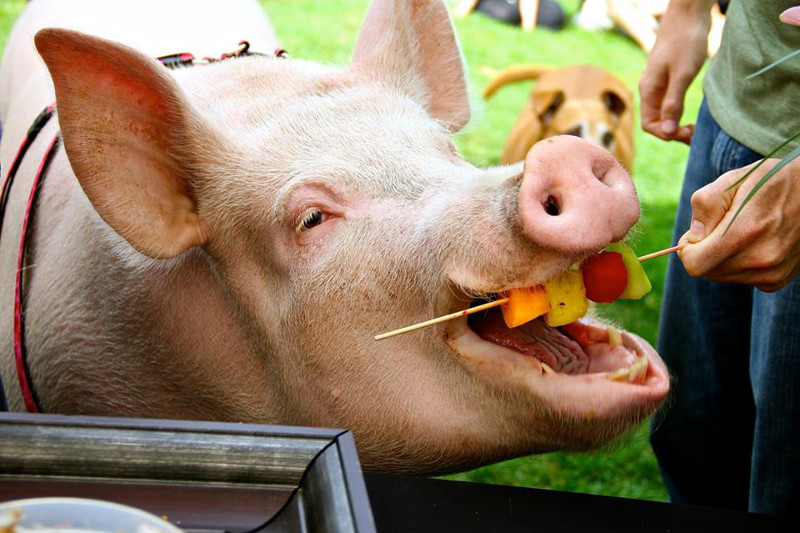 Like doting new parents, we oohed and aahed at every glance, snort and twitch. We exclaimed in excitement, “aaaw, she’s awake,” “aaaw, she’s sleeeeping,” “aaaw, she loves cantaloupe.” We joyfully went on like this for well over two hours past the official time that the party was scheduled to end. 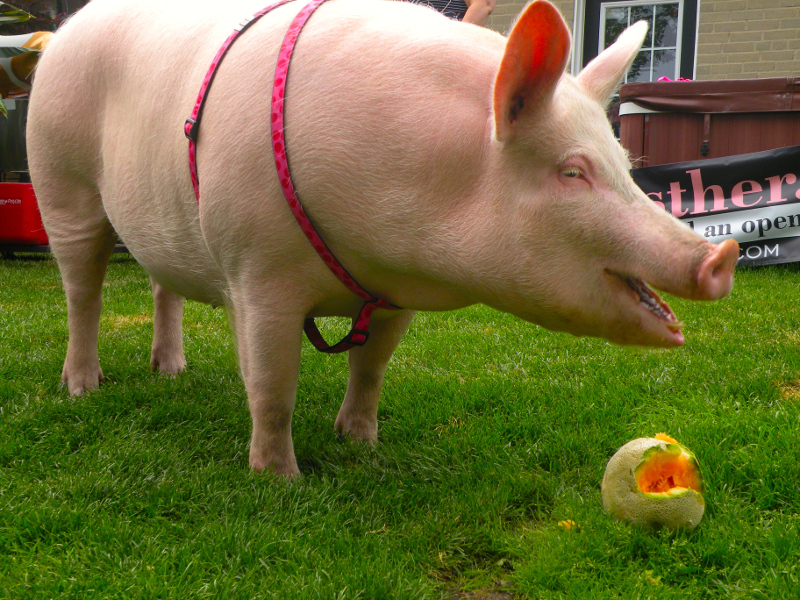 For a group of dedicated animal lovers and advocates, this party was truly a dream come true. Enjoying the company of others working to spread the message of compassion and justice for animals while having the privilege of sharing an afternoon with the beloved Esther and her gracious hosts is a glimpse of the world we strive to create everyday. 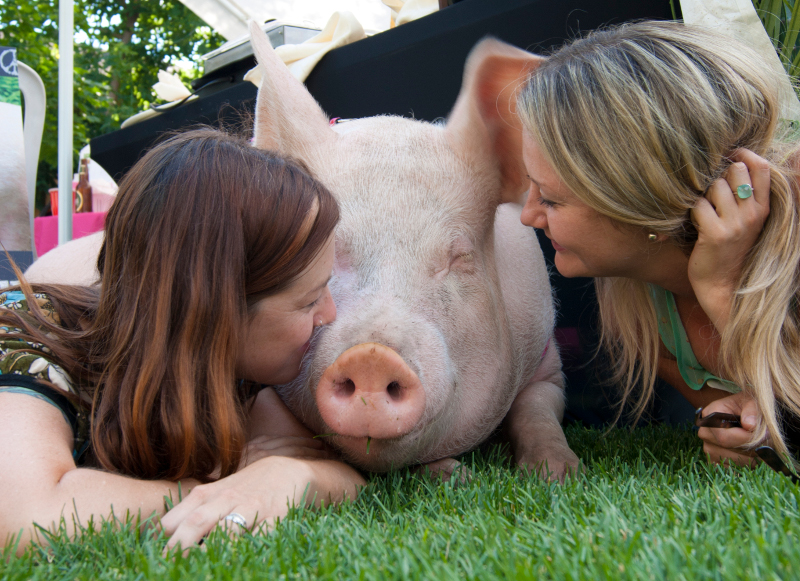 When advocating for animals it can be easy to get lost in statistics. Esther reminds us that we’re fighting for individuals. She reminds us that every individual animal, if given the opportunity, will shine with a unique personality and inevitably permeate the sometimes heartbreaking world with a little more heart. 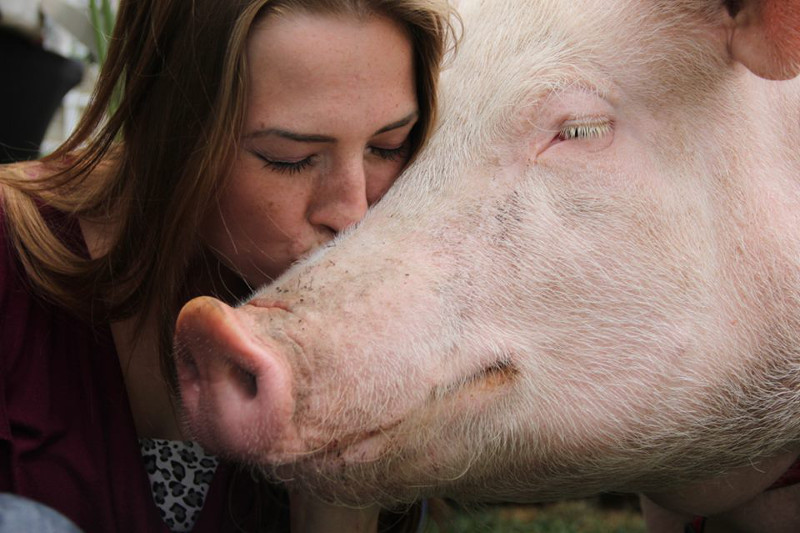 Her story is powerful. It speaks volumes to the often unseen reality of animal agriculture, to the complex emotional and intellectual lives of farmed animals, to what the generosity and commitment of a small group of individuals can accomplish, and to the incredible transformative power of education and an open mind.

Because of the unique circumstance that Esther unexpectedly entered the lives of Steve and Derek, her fans have witnessed a typical commercial pig in a not-so-typical companion animal setting. The ability to see her up close and personal with human, canine, and feline companions, along with her celebratory presence in social media has allowed us to ask questions that we might have previously avoided. Is there any relevant difference between the animals we love and the animals we eat? Why love one but eat the other?

Esther and her inter-species family are ambassadors for a world to come. For every moment that Esther roots, we’ll be rooting for her, and for a better world. Happy Birthday Esther!