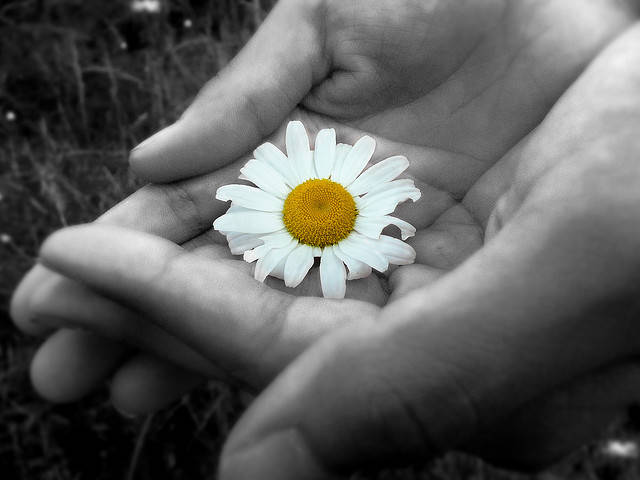 It’s not a stretch to feel compassion for animals in factory farms. Most meat eaters I know deplore the treatment animals endure in these despicable death camps. It’s why they don’t like to think about this when they’re dining. But maybe this is starting at the wrong end of the equation.

Back in the seventies when I was a vegetarian, I had a temp job assisting an industrial scale repairman. I carried his stuff, handed him tools, and not much else. Most of his calls were to supermarkets and delis, but we also stopped at a couple of slaughterhouses and packing plants. I never had to follow him onto the “kill floor”—I think he suspected I might not be able to keep my lunch down—but one day we went into a room where about a dozen Mexican workers were cutting and packing meat.

Sides of beef cruised into the room on conveyors, and the men would reach up with hooks and yank them down onto their worktables. Then with blinding speed, they would slash into the flesh and carve out those familiar cuts of meat we see on shelves at the market, gleaming red through plastic wrappers. Each worker dispatched a side of beef—pulling it off the conveyor, making the cuts, packing the pieces, and discarding the scraps—in what seemed like a minute and a half. Then another, and another. It was surreal, but what I’ve never forgotten was the demeanor of those men. They seemed insane. No, really. They were wild-eyed, yapping and shrieking unintelligibly among themselves—I’m fluent in Spanish, and this was no language I’d ever heard—flailing furiously with their hooks and knives like ragdolls possessed by an unseen force. It was horrifying in a number of ways, not the least of which was the stench and sheer ugliness of all that flesh being handled with such detached brutality. But as I left, all I could think of was the women and children these men went home to each night, and the normal lives they all must have tried to live.

I have since learned that the scene I witnessed is not uncommon in the industry that processes animals en masse like unfeeling commodities. Working in such an appallingly callous, inhumane environment seems to have a degrading effect on people. Anecdotal and video evidence of this is steadily piling up, indicating that factory farm and slaughterhouse employees suffer from a sort of post-traumatic stress syndrome, to which they respond with acts of unspeakable cruelty against the animals. Again, I wonder what their lives must be like away from their jobs.

We live in a world of whirling opposites, the inescapable yin and yang, in which the one cannot exist without the other. Indeed each one of us is such a world, and any sense of mastery over one half of our nature or the other is self-deception. I want to be always kind, but in fact all too often I am not. I want to do no harm—and I’m glad to be harboring this wish—but inevitably I harm someone or something. I want to do the right thing, but sometimes the right thing, even when I can manage it, has unintended consequences. My heart breaks at the suffering of any creature, and then I am the creature suffering that heartbreak.

It’s only natural that we recoil in horror at the sight or even the thought of any atrocity, especially when it’s visited on the innocent and defenseless. It’s a testament to the inherent goodness of what our species is evolving to embody. It would seem equally natural to blame the perpetrators, and easy—even righteous—to condemn them. But I wonder if in our zeal to see “justice” done, we’re not shooting ourselves in the foot. Each one of us is, after all, a product of our environment—and certainly of the choices we make, but even those are based on the information we’ve been given since we were born, the parenting and mentoring we’ve received. So I wonder…

Maybe we need to have compassion for the pure soul residing in each heart, utterly perfect and blameless, wise and kind, yet unable to manifest purely in a world of whirling opposites. Maybe if we can recognize the overarching goodness that lives behind the veil of what we call good and evil, and feel for its inability to break through, we’ll be able to have compassion for ourselves. And if we can do that, then maybe we’ll be able to have compassion for the butchers and the self-righteous, the greedy and the tyrants. Maybe then one day our descendants will grow up in an environment that fosters the full potential of what a human being can be, and the plight of animals will have ceased to be a controversial topic.