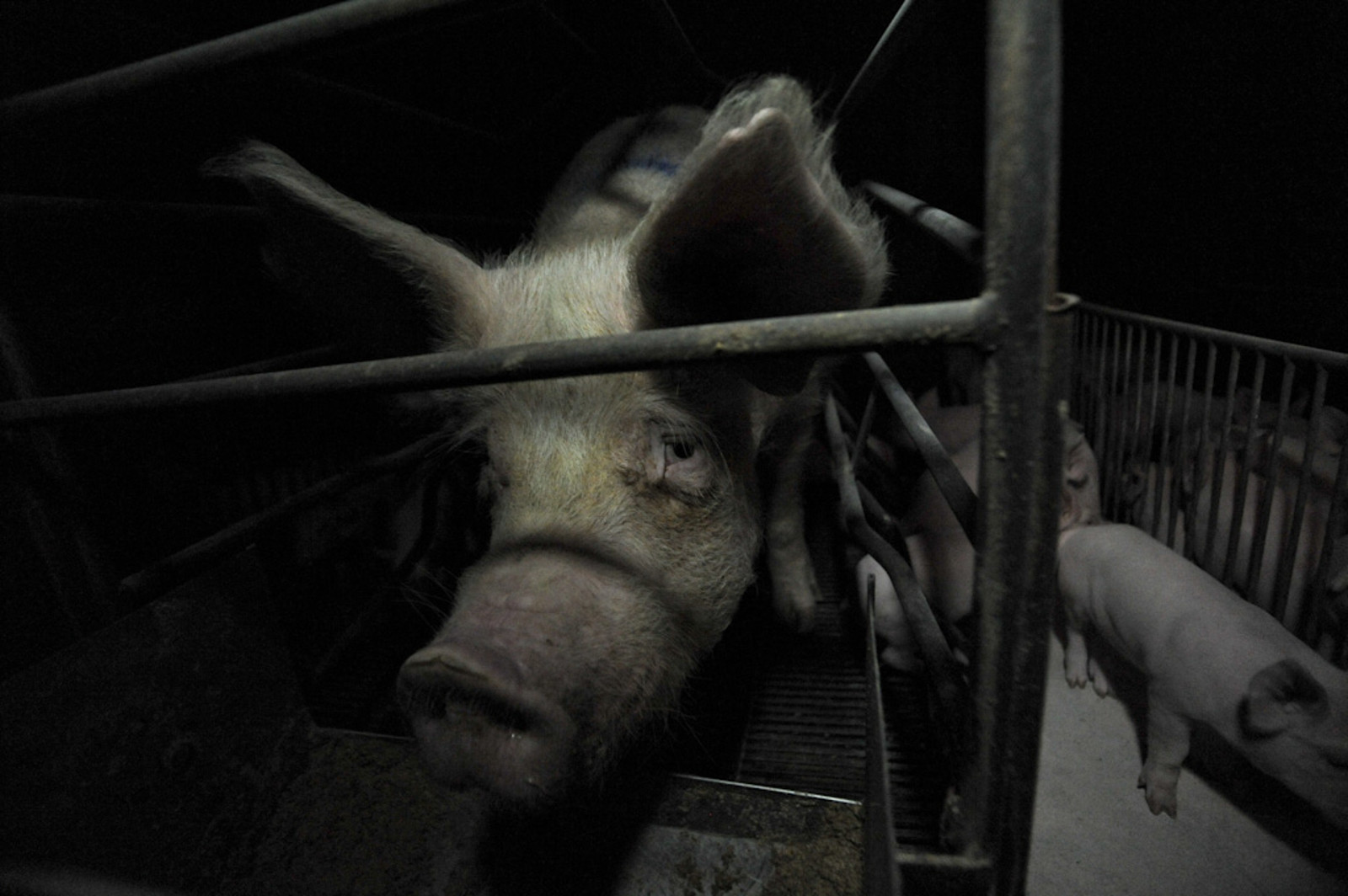 Over the last decade, industrial agriculture’s abusive practices have had a bright light shinned on them by animal protection groups like the Humane Society of the United States (HSUS) and Mercy for Animals. Undercover investigations have documented egregious cruelty to animals at an alarming rate. When we see these exposes, and learn the truth about how animals are treated on factory farms, one of the first questions we ask ourselves is, “How can this be legal?”

The vast majority of animals — pigs, chickens, and cows — slaughtered for food each year in the United States suffer immensely inside factory farms. And, shockingly, these animals have virtually no legal protections whatsoever. In fact, not a single federal law protects farm animals while on the farm and most state animal cruelty laws either exempt farm animals all together or allow for “standard industry practices” no matter how cruel.

Joseph Vining writes a compelling essay on the topic of animal cruelty laws and factory farming for the Michigan Law Review. The issue of legal protection for farm animals goes all the way back to the the beginnings of our nation’s history.

He writes, “While protection of animals from cruelty was developing in the United States during the nineteenth and twentieth centuries into a basic public value, farm animals, with few exceptions, were being moved outside legal protection-either through their exemption from the definition of animals protected, or through the exemption of cruel practices in farming from the definition of cruel practices.”

He explains that in addition to this change in mindset of how we view farm animals, family farming was starting to be replaced with the factory farms we know today. This combination of reduced protection and increased exploitation has led us to the incredibly outdated legal system we have in place regarding farm animals.

In the eyes of the law, farm animals have no protection, and the abuses inflicted upon them on a daily basis would be illegal if inflicted on our own dogs and cats. The following legal protections we’re about to cover show just how little protection the nine billion animals we slaughter in the U.S. have and why political actions on behalf of farm animals are incredibly important.

1. No Rest During Transport

The 28 hour law, created in 1873 and amended in 1994, is an outdated law that covers farmed animals during transportation only.

According to the Animal Legal Defense Fund (ALDF), “The law states that when animals are being transported for slaughter, the vehicle must stop every 28 hours and the animals must be let out for exercise, food, and water.”

However, this law is fraught with loopholes. First of which being that “animals can be kept confined for up to 36 hours with written permission from the animals’ owner.”

Well that’s an easy way to tack on another 8 hours of confinement with just a flick of the pen.

In addition, ALDF reports, “Many truck drivers do not adhere to this rule, especially when the trip is only slightly over 28 hours. The law is rarely, if ever, enforced.”

Here’s the last kicker: “The United States Department of Agriculture also claims that the law does not apply to birds,” thus, leaving out 95 percent of land animals slaughtered for food in the United States.

Another outdated piece of federal law, the Humane Methods of Livestock Slaughter Act, “requires that livestock be stunned into unconsciousness prior to slaughter. This is usually accomplished through electrocution when dealing with pigs and captive bolt stunning for cows, goats, and sheep,” via ALDF.

Shockingly, because the USDA has failed to define the word “animal” to not include poultry,  rabbits and fish, these animals are left out of the meager protection this law covers. For the 5 percent of farm animals who are covered, the Animal Welfare Institute reports that “the laws are blatantly disregarded. The large-scale plants move animals so rapidly through the slaughter lines that it is impossible to stun and kill them humanely.”

This leads to semi or fully conscious animals moving through the slaughter plant, something that reaches a level of cruelty we should not tolerate.

3. No Protection from Abuse

Every state in the country has an animal cruelty statute. However, due to common farming or standard industry practice exemptions, farm animals are left unprotected from cruelty.

Mark Bittman describes this phenomenon well in the New York Times article, “Some Animals are more Equal than Others.” He explains that these exemptions “allow industry — rather than lawmakers — to make any practice legal as long as it’s common.”

Petfinder’s Melissa Bjorkenstam illustrates just how absurd this inconsistency in our state animal cruelty statutes is: “An individual who starved his chicken ‘for no good reason’ could be prosecuted. However, in the poultry industry it is accepted practice to starve hens to induce their feathers to molt. In this forced molting, hens are deprived of any food for up to 14 days as a means of boosting egg production. Although this causes extreme suffering and violates basic anticruelty provisions, forced molting is standard industry wide, and it would be argued that the practice is justifiable and necessary to meet public demand for eggs.”

4. No Safeguard Against Painful Tail Docking

According to the HSUS, “Tail docking involves the partial amputation—typically without pain killers—of up to two-thirds of a cow’s tail.”

Farmers say that the practice “produces more sanitary milk by keeping the tail from dragging in mud and manure,” via the LA Times.

However, “scientific literature is clear on this issue: the practice has no positive effects and negatively impacts cows’ wellbeing. That’s why the National Milk Producers Federation and American Veterinary Medical Association both oppose the practice,” reports the HSUS.

Thankfully, there are people who care more about the animals themselves than the milk they produce. Washington, California, Ohio, Rhode Island and New Jersey have all banned tail docking, and Colorado is considering a similar ban, according to the HSUS.

5. No Shield Against Force Feeding

The “delicacy” that is foie gras, is actually pretty disgusting. Mercy for Animals explains the process of how it gets on your plate: “On factory farms, ducks who are raised for foie gras have metal pipes shoved down their throats three times a day and are force-fed an unnatural amount of food. This process causes the birds to become obese and their livers to become diseased and swollen up to ten times their normal size.”

In light of this cruelty, one state, California, has outlawed the practice. The ban was met with huge opposition from the industry and restaurants who valued the product.

6. No Freedom to Move and Live

Veal Crates – Male cows have little economic value in the dairy industry, for that reason, male calves at only days old are taken from their mothers and slaughtered for veal. Calves are typically confined in veal crates for the duration of their short 16-week lives. In these crates, calves are unable to even turn around and often chained by the neck to further restrict movement, thereby keeping their meat tender. Seven states have outlawed or are phasing out veal crates (Arizona, California, Colorado, Maine, Michigan, Ohio, and Rhode Island).

Gestation crates – In the pork industry, over five million mother pigs are confined day and night for nearly their entire life in gestation crates. During constant cycles of impregnation, the pigs are unable to even turn around.

Renowned animal welfare scientist Dr. Temple Grandin says, “We’ve got to treat animals right, and gestation stalls have got to go … Confining an animal for most of its life in a box in which it is not able to turn around does not provide a decent life.”

With the help of the HSUS and other animal protection advocates, nine U.S. states — Arizona, California, Colorado, Florida, Maine, Michigan, Ohio, Oregon, and Rhode Island — have passed laws to prohibit the use of gestation crates. What’s more, some of the world’s largest food companies have announced that they will also eliminate gestation crates from their supply chains.

Battery Cages – In the U.S, roughly 250 million egg laying hens are confined in small wire cages called battery cages. In these cages, the birds are packed in so tightly that they’re unable to even spread their wings, engage in natural behaviors like dust bathing. The most notable legislation regarding battery cages comes from California’s Prop 2, which requires “that all California egg producers phase out their use of battery cages.” (Prop 2 also banned other cruel confinement systems for mother pigs and veal calves.)

A federal bill backed by the largest animals welfare groups and the United Egg Producers, would ban battery cages nationwide. Contact your legislators and urge them to support and co-sponsor S. 820/H.R. 1731, the Egg Products Inspection Act Amendments of 2013, which would give birds double the space they currently have.

Needless to say, confining a dog or cat in this manner would be illegal in every state, yet for egg laying hens and other farm animals, extreme confinement is perfectly legal – despite being cruel and unnecessary.

To conclude, we truly need to get politically active on behalf of animals. If you’re a student, try checking out a course (or full study) in animal law at your university. Meet with your representatives and speak out about issues that are important to you. Above all, do something. These animals need us to be their voice.