Meet Amelia, the ‘Worst Pig in the World,’ Now Living Free in a Sanctuary! 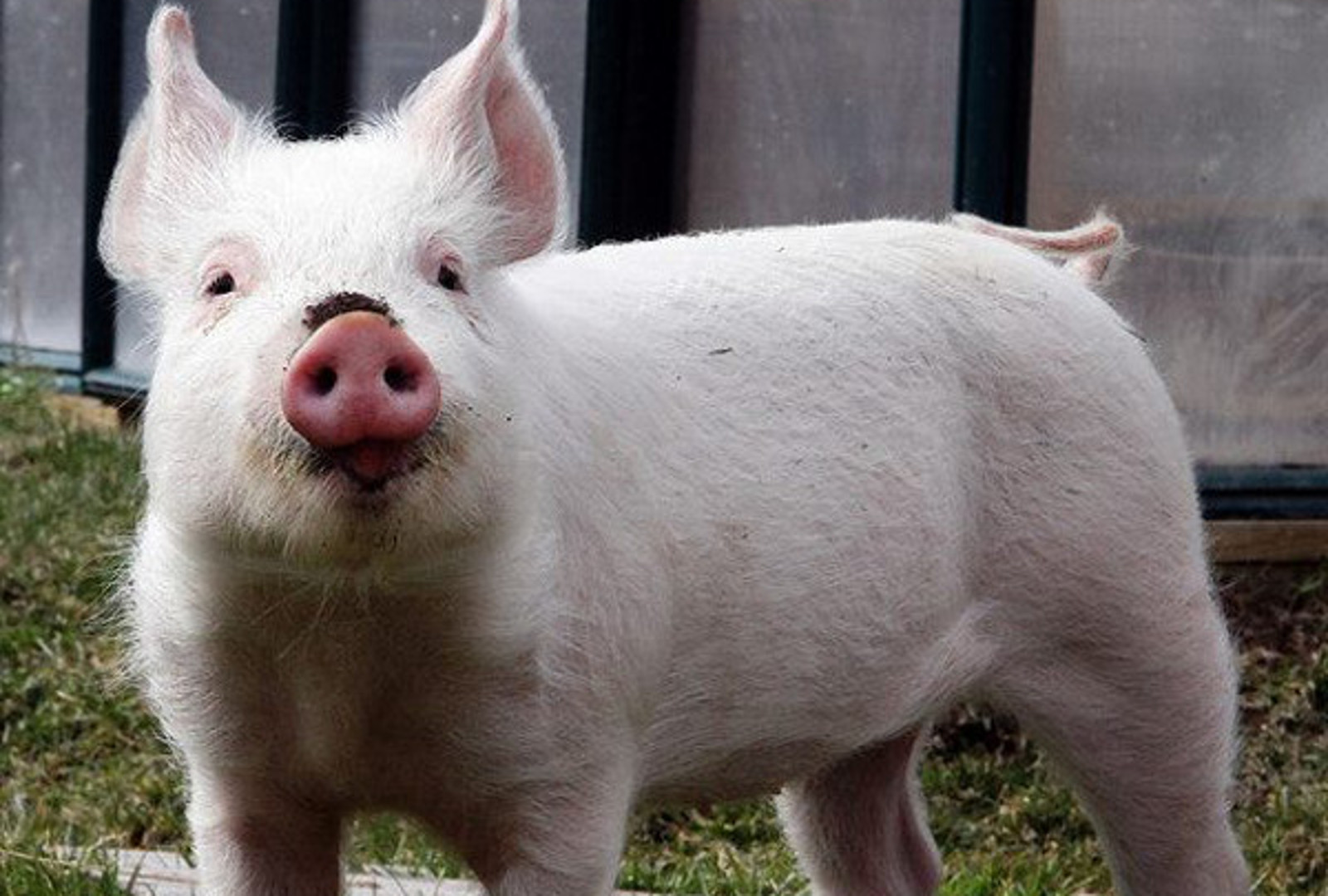 All it takes is a loud call… “Amelia!”… across the pastures of Catskill Animal Sanctuary, and Amelia, “the worst pig in the world,” will come running. What you see running towards you will not be a large menacing boar, or a massive pig looking to knock you off your feet and drag you through the mud, no sir: what you will see, is a content pink piggy with up-turned ears bounding towards you with a look that just insists you scratch behind her ears.

The nickname “the worst pig in the world,” has of course been bestowed upon this little pig with an air of sarcasm. In fact, any CAS employee who has come into contact with this particular piggy will tell you she may be the “worst,” but she is also the most lovable too. Having grown up at CAS, Amelia has been spoiled to the max, however, had she not been rescued three years ago, her story would be vastly different.

Amelia was rescued in January of 2011, from the home of a woman who was notorious for hoarding and abusing animals.

Michelle Alvarez, Outreach Manager for CAS, tells OGP, “For years, this woman has kept horses in filthy and unsanitary conditions, and deprived them of proper nutrition and medical treatment.”

Among this squalor, was a little piglet who CAS would later name, Amelia. Amelia was only a few months old when she came to the sanctuary, and weighed less than 10 pounds at the time. She was a very tiny piglet and had to be kept in her own barn, separate from the other pigs until she was big enough to move into the big pig barn.

It was the dead of winter when Amelia arrived at the sanctuary so she needed to wear a coat– intended for a Chihuahua–to keep warm. 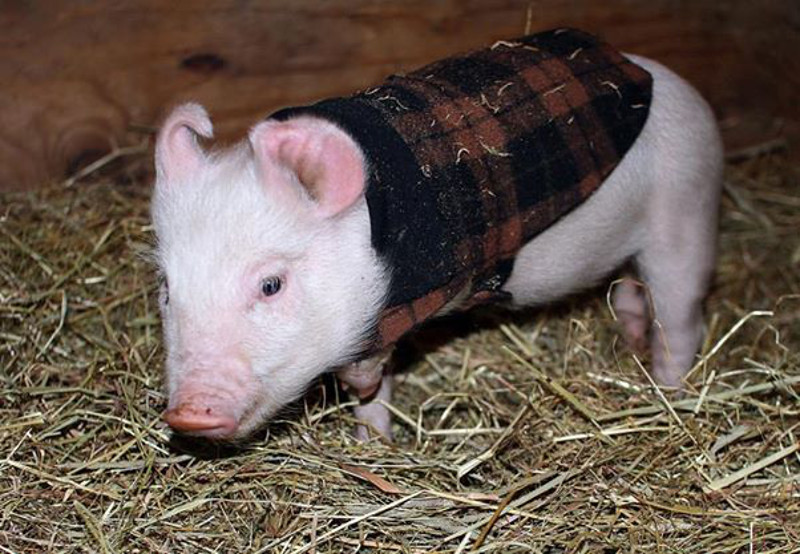 Although she was very small upon arrival, with the proper care and nutrition, Amelia practically doubled in size within the span of a week. Alvarez recalls the time they had to take Amelia shopping for a new coat in Petsmart, just check out the hilarious fashion show that ensues:

When Amelia was still to young to live in the big pig barn, she would sleep with Alvarez on the floor of  CAS Director, Kathy Stevens’ house. Like a little slumber party, Alvarez tells OGP, “We’d pile blankets and pillows on the living room floor and hang out.” 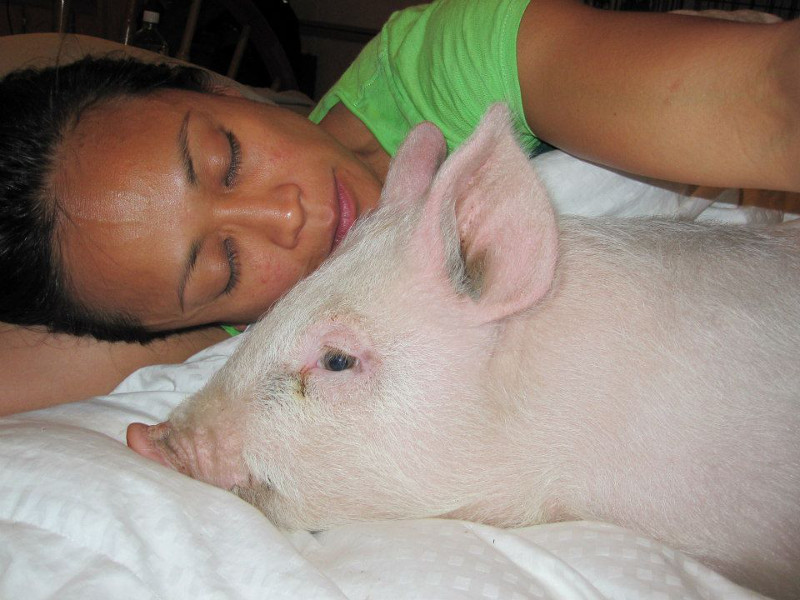 The signs of Amelia’s sassy disposition began to show at an early age. Alvarez explains, ” In order to sleep, Amelia would always have to be touching and snuggled against me — either sleeping across my chest or I’d have to drape my legs across her back — or having me ‘spoon’ her.”

Moreover, Amelia knew the importance of beauty sleep, Alvarez tells OGP, “If I woke her up during the night or woke her too early in the morning, she would loudly grunt her disapproval and kick me with her tiny hooves and bite me!”

Because Amelia was rescued from living with a hoarder at such a young age, she bares no scars of that traumatic experience. Alvarez tells OGP, “thankfully, Amelia was emotionally healthy when she arrived (happy, relaxed and trusting) and has known love and kindness for virtually her whole life.” 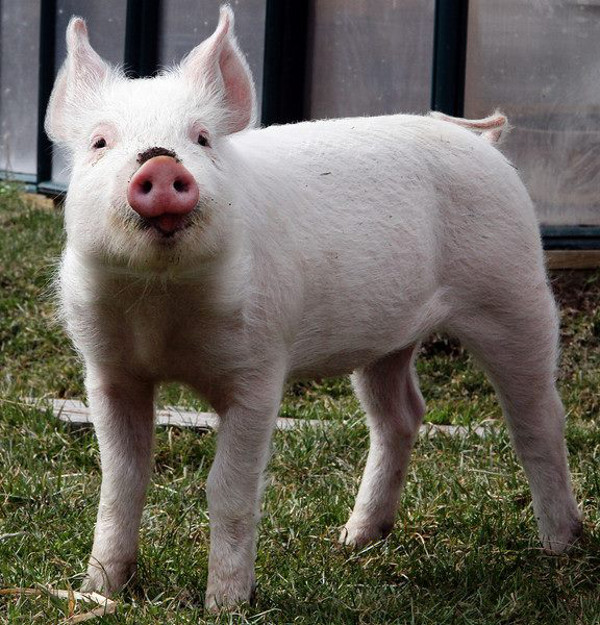 It can’t be said for sure, but I suspect that this incredible atmosphere of love and kindness is what has allowed Amelia to develop the large personality she showcases today. Most animals that are rescued from horrible situations take some time to come out of their shell and it only happens once they begin to feel they can trust the people around them.

Little Miss Amelia fortunately never needed that transition time.  Alvarez explains that Amelia gained the title of “worst pig in the world” because, “she has a huge personality — she is stubborn, feisty, a drama queen, food obsessed, rambunctious, and driven by emotion. She wants what she wants, when she wants it!” the quintessential pig. Alvarez adds, “She is also incredibly lovable!” 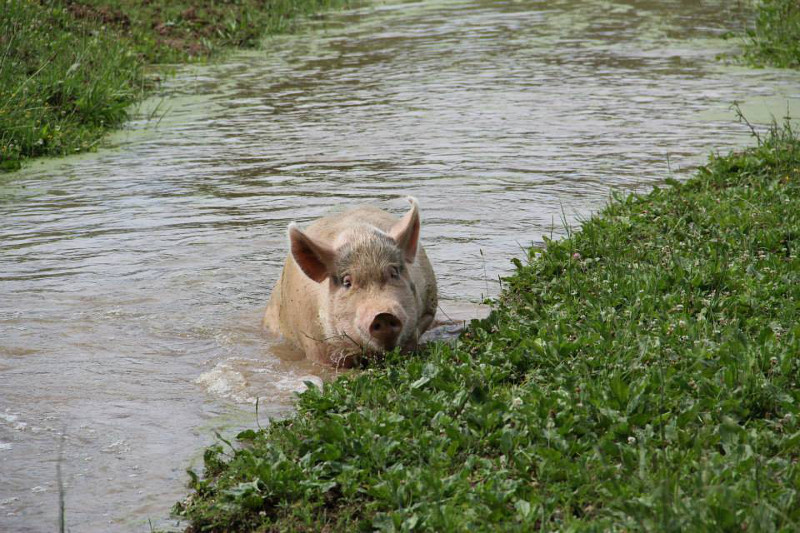 In an average day, Alvarez tells OGP that Amelia, “likes to steal [her older brothers] Roscoe and Reggie’s food at feeding time, swim in the stream, run through the fields, nap in the sunshine, play in the mud, root in the ground for hours on end, and come running when you call her name.”

Quite the packed schedule for Amelia the pig.

There is no questioning, as Alvarez says, that Amelia is “one of the lucky ones,” a pig who has gotten to grow up and experience the joys of being a pig. Amelia has never been deprived of the opportunity to express her natural behaviors or interact in a loving manner with other animals and humans, a simple truth that cannot be said for the majority of the pigs in the world.

More than anything, Alvarez wants people to learn from Amelia’s story that, “pigs are incredibly intelligent, have rich emotional lives and feel physical pain just like us humans. That each pig is as unique as each individual human.”

Without the help of the wonderful people at Catskill Animal Sanctuary, Amelia’s beautiful life would have never been possible. While she may get a little annoying every now and then, when you see this contagious little smile come across your face there is no questioning that while she may be the worst pig in the world, but she is also the happiest. 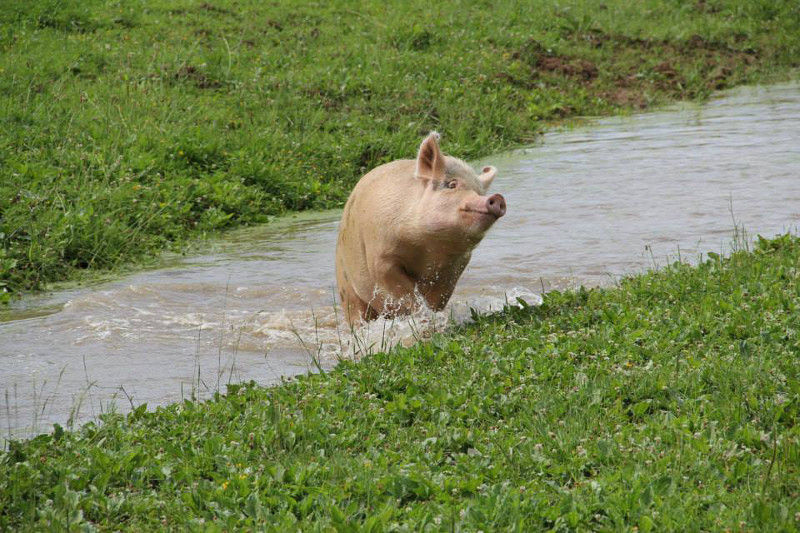 To learn more about Catskill Animal Sanctuary and follow the sordid adventures of Amelia, check out their Facebook page and website. To donate to CAS and help them rescue many other animals in need, click here.