Why People Who Love Animals, Eat Animals – And What You Can Do to Change That 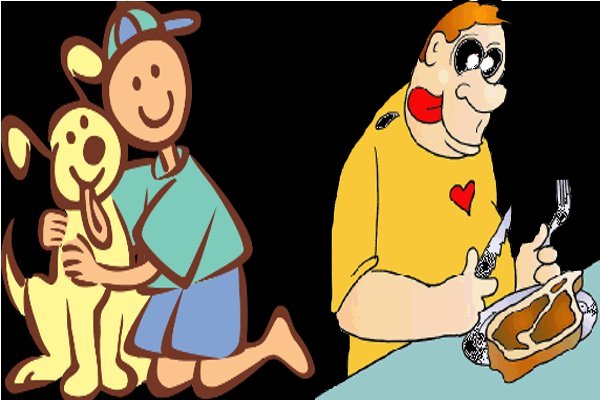 The answer applies to all meat eaters, animal lovers notwithstanding. While there are many reasons for people’s contradictory attitudes and behaviors toward animals, most important is the invisible belief system, or ideology, called carnism. Carnism conditions people to eat animals by “numbing” them, psychologically and emotionally, to the truth of their experience—by blocking their awareness of the discrepancy between their values and practices. Whenever a group of people make exception to what they would normally consider ethical (and especially when they are unaware of such an exception), it is indicative that an underlying ideology is at work.

Ideologies such as carnism, which require people to act against their core values, use a set of social and psychological defense mechanisms so that humane people participate in inhumane practices without realizing what they are doing. The primary defense of carnism is invisibility. The invisibility of carnism as an ideology is why eating animals is seen as a given, rather than a choice; and the invisibility of the practices of carnism (the breeding and slaughtering of animals for food) is why people are able to deny and avoid the horrific truths about animal agriculture. However, due in large part to the advent of the Internet and the success of dedicated vegan activists, invisibility—though still a powerful defense—has been sufficiently weakened, so that other defenses have taken on a more important role in maintaining the system. Understanding these secondary defenses is essential to transforming the system that enables animal lovers to be animal eaters.

The Mythology of Meat: The Three Ns of Justification

Exploitative systems such as carnism teach people to justify their actions, by presenting ideological myths as though they were universal truths. There is a vast mythology surrounding eating animals but all myths fall in one way or another under the Three Ns of Justification: eating animals is normal, natural, and necessary. (Not surprisingly, these same arguments have been used to support the ideologies that have enabled slavery, male dominance, heterosexual supremacy, etc.) Such myths are institutionalized—they are embraced and maintained by all major social institutions, from the family to the state—and they are deeply embedded in the consciousness of anyone born into carnistic culture.

The impact of the Three Ns on meat consumers should not be underestimated. If people truly believe in the Ns (which most do), then by default they perceive not eating animals as abnormal, unnatural, and unnecessary, and so becoming vegan feels threatening (and also needless). For instance, to deviate from the carnistic norm is to take the risk of being socially marginalized (Consider, for instance, how your veganism is received among those who eat animals. Are your choices celebrated and met with curiosity and enthusiasm? Or do you encounter resistance and hostility? Are your dietary needs readily and cheerfully accommodated when you eat with others or travel? Or are you seen as annoying and “high maintenance”?). Deviating from the norm also means eating an “unnatural” and thus unhealthful diet, as natural is considered synonymous with healthful (an irony, given the health benefits of a natural vegan diet!). And if veganism is abnormal and unnatural, then it’s pointless to consider making the change.

The Mentality of Meat: Cognitive Distortions and Emotional Distancing

Carnism uses another set of defenses which support and are supported by the Three Ns: cognitive distortions. These distortions are the psychological component of carnism; they are automatic, unconscious mental processes that distort our perceptions of meat and the animals we learn to eat so that we can feel comfortable enough to consume them. In short, when we’re born into an entrenched system, we learn to look at the world through the lens of that system; we internalize carnism.

Cognitive distortions cause people, to, for instance, view farmed animals as objects (e.g., people refer to a chicken as something, rather than someone) and as abstractions, lacking in any individuality or personality (e.g., a pig is a pig and all pigs are the same). These distortions also cause people to create rigid categories in their minds so that they can harbor very different feelings and behaviors toward different species (e.g., beef is delicious and dog meat is disgusting; cows are for eating and dogs are our friends). Essentially, cognitive distortions act as a distancing mechanism, distancing people from their natural empathy toward other sentient beings.

Petting the Dog While Eating the Hog

The vast majority of people – including animal lovers – eat animals not because they’re selfish, or evil, but because they’re a part of a system that has shaped their beliefs, preferences, thoughts, feelings, and behaviors in profound and powerful ways. And because most people do care about animals, they are threatened by – and are therefore defended against – information that reveals the discrepancy between their values and practices. In fact, animal lovers are likely even more defended against learning how they’ve participated in atrocities against animals, since they are more sensitive to animal suffering.

Once we understand carnism, we can recognize that eating animals is not simply a matter of personal ethics, but the inevitable end result of a deeply entrenched belief system. We can therefore dramatically reframe the way we think and talk about the issue of eating animals.

Specifically, understanding carnism can help vegans: have more understanding and thus more compassion for those who are not vegan; communicate more effectively about veganism, as we understand the psychology of those we’re communicating with; avoid the frustration that comes with the expectation that the facts will sell the ideology (they don’t; and it helps to expect some defensiveness when discussing eating animals); and better work toward the abolition of animal agriculture, as we challenge structural, or systemic carnism and not simply reach out to one meat eater at a time. Perhaps most importantly, understanding carnism can help us appreciate that asking someone to stop eating animals – even someone who loves animals – is not simply asking for a change of behavior, but for a profound shift of consciousness. Such a shift will only occur when the individual is ready; as vegans, our job is to help create a state of readiness, by modeling the same understanding and compassion we are asking for.