Seaweed: Why It Should be a Staple in Your Kitchen

There was a time when the only way I would eat seaweed would be if some got into my mouth while swimming at the beach. Now I have several types of seaweed in my kitchen and use it in my dishes as often as possible. Maybe you’re familiar with seaweed from eating sushi but there are many types of seaweed and many ways to incorporate it into your cooking. Seaweed has been used in Asian cooking for thousands of years and now these sea veggies are becoming more mainstream – you don’t even need to go to a specialty store to buy them. Read on to find out why seaweed should be a staple in your kitchen too.

1. What are Sea Vegetables?

The name “sea vegetables” sounds so much better than “seaweed,” doesn’t it? It also sounds better than “algae” which is probably why it’s used for culinary purposes. Sea vegetables include many marine algae varieties and come in all different colors including red, green, brown, and yellow. They can be eaten raw or cooked and add a salty, savory umami flavor to dishes. Learn more in All You Ever Wanted to Know About Sea Vegetables: Kelps, Noris, Oh My!

You may be asking “why should I eat seaweed?” Good question! Seaweed is considered a superfood. The oldest plant family on Earth, seaweed is packed with more nutrients than any other plant. They have been used for centuries to treat many health problems. Sea veggies are a great source of iodine, vitamins A, C, E, and B vitamins. They are filled with antioxidants and have detoxification and antibiotic properties. Sea veggies are also rich in protein, calcium, magnesium, and fiber. To learn even more about the health benefits of sea veggies, see Seaweed Decoded: Why It’s Essential on a Vegan Diet.

There are many different types of sea vegetables. Nori is the one you are probably most familiar with. This red algae is the flaky, dark green seaweed used to wrap sushi and is used as a garnish on salads and in miso soup. You can buy it in full sheets for sushi wrapping. Wakame is usually used in salads and miso soups. It is sold dried and needs to be rehydrated. The taste is mildly sweet. Dulse is a red sea veggie sold in flakes. It’s used in soups, stir-fries, and I use it a lot to add that “fishy” flavor to my vegan seafood dishes.

Arame is a dark brown seaweed that is sold dehydrated. It has a semi-sweet flavor and can be used on salads or in stir-fries. Kelp is one of the more commonly eaten sea veggies. It can be added to any recipe for a salty, umami flavor.

Spirulina is a deep sea green algae and is considered a superfood. It is high in protein, B-vitamins, and antioxidants as well as other nutrients. In fact, spirulina contains so many vitamins and minerals, it is like taking a complete multivitamin. You can buy spirulina in powder or tablet form. Agar-Agar is commonly used in vegan baking and in making vegan cheeses because of its thickening properties. It is sold in flake or solid form and unlike other algae, appears white. 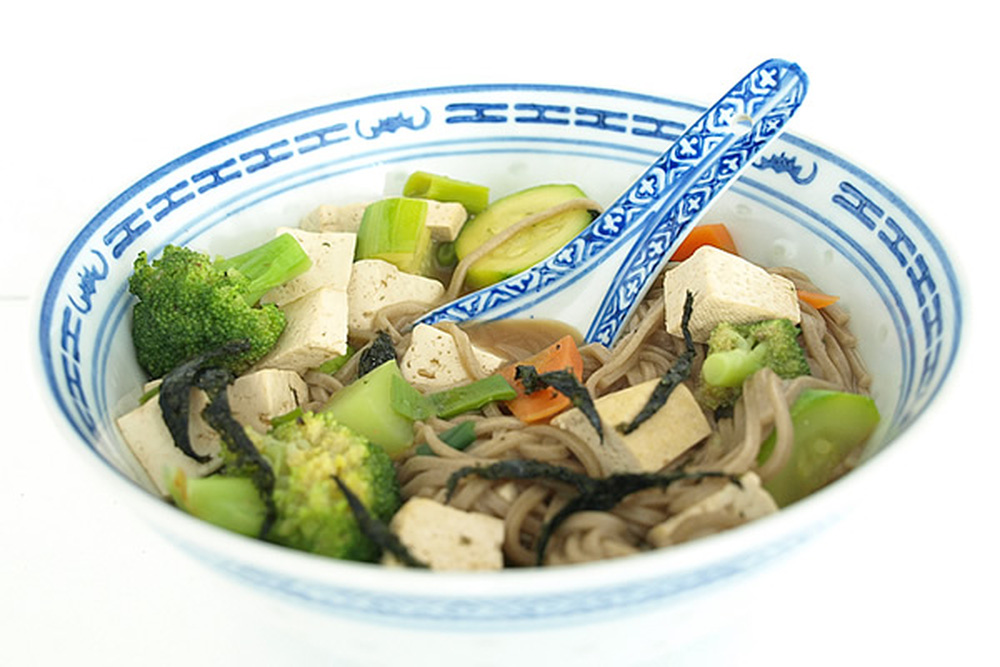 How you use sea veggies depends on the type of seaweed you’re using. There are well over 10,000 types of seaweed. Most need to be rehydrated which means you can just add them to soups. Nori, used to wrap sushi, can be eaten dry. Seaweed can be added to salads like this Easy Seaweed Salad and this Seaweed Salad with Toasted Sesame Dressing. It can also be fried or dehydrated to make crispy snacks or added to stir-fries. Sometimes you just want to add a salty “sea” flavor to dishes and seaweed flakes are perfect for this. Let’s look at different ways to cook with seaweed. 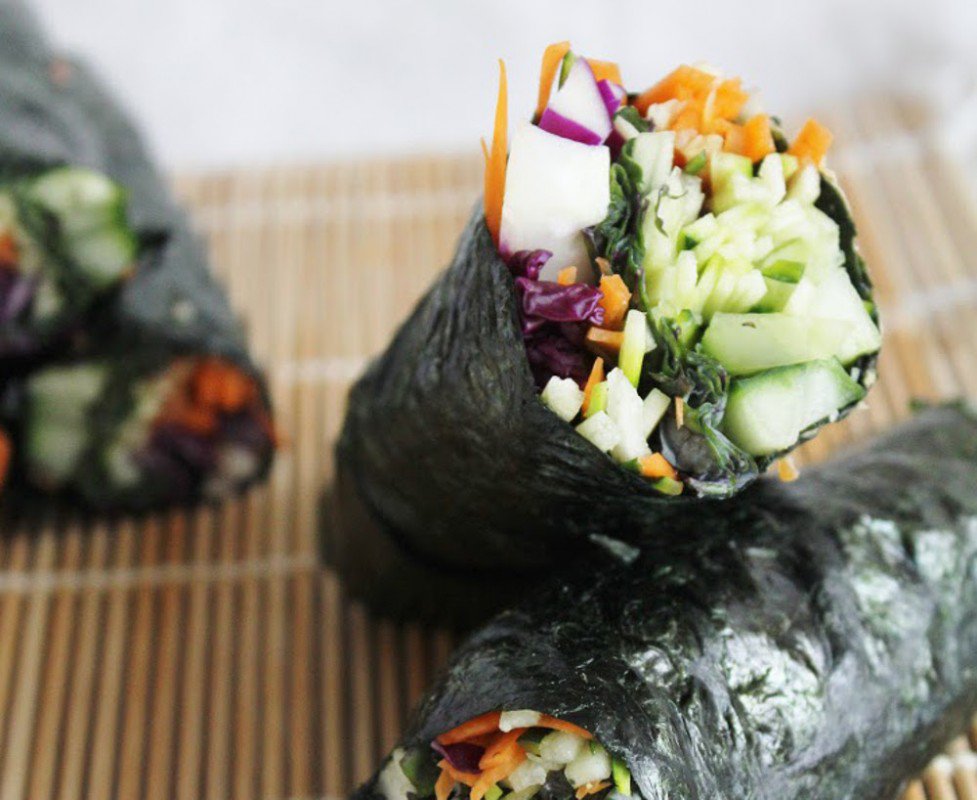 Sushi is all the rage and vegan sushi is taking over the world. If you’ve never made sushi before and you’re a little intimidated, don’t worry. Read How to Reinvent Your Sushi, Vegan-Style and How to Make the Best Sushi Rolls for tips and advice. If you’re more of a visual learner, watch this video on How to Make Vegan Sushi Rolls. Try making these Raw Sushi Rolls with Shiitake Mushrooms, Buckwheat Sushi with Beetroot Juice, Tempeh, and Avocado, and Veggie Sushi with Smoked Tempeh and Avocado. For more creative takes, try these 15 Delicious New Ways to Make Sushi From Buffalo Peanut to Sweet Potato Burrito. 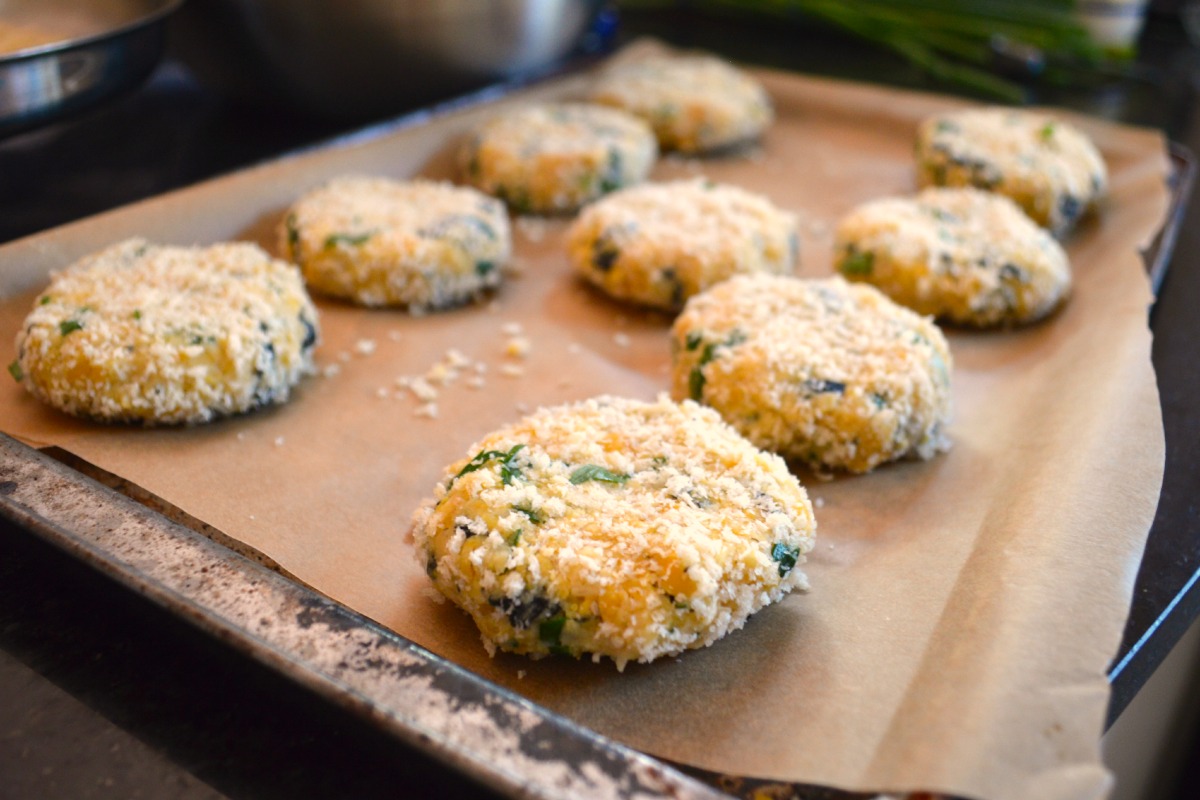 When you eat a plant-based diet, you learn to see seafood in a whole new light. It’s totally possible to make all your favorite “fishy” dishes without the fish. All you have to do is replicate the familiar flavors of the sea and seaweed can help with that. Just by adding some dill, lemon, and seaweed, you can make fishy dishes with tofu, tempeh, chickpeas, or mushrooms. To get lots of tips, see You Don’t Need Fish to Make Delicious Seafood Dishes: Use These Tips Instead.

These Baked ‘Fish’ Cakes with Lemon Herb Mayo have small pieces of nori mixed in with the chickpeas as does this ‘Fish’ Pie with Tofu and Oyster Mushrooms. I like to use kelp and dulse flakes when I make vegan “fish” dishes like my Chickpea ‘Tuna’ Salad, Gefilte ‘Fish,’ Tempeh Crab Cakes, and Tofu Scallops. Dulse flakes are also used in this Garden and Sea Pate, Vegan Fish and Chips, and this Mock Tuna Salad. You can even make fishless fish sauce – this Vegan Fish Sauce has shredded wakame in it. This Seaweed and Tofu Poke is a vegan version of the dish usually made with Ahi Tuna but here it is made with wakame. 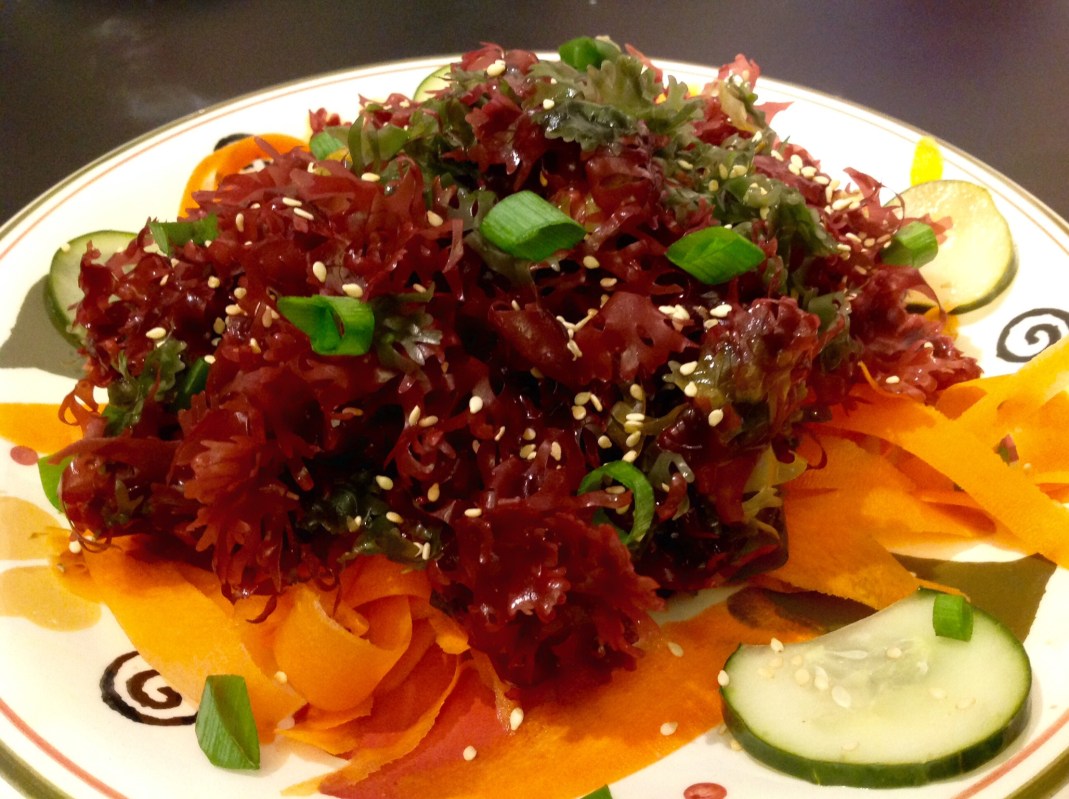 When it comes to salads, seaweed can be either the star or a supporting character in the ingredient list. In this Spicy Cucumber Avocado Onion Salad, dulse, hijiki, and arame add a rich, umami flavor. If you want the focus to be on the sea veggies, however, a yummy seaweed salad is in your future. Try this Easy Seaweed Salad with brown seaweed, Chinese Seaweed Salad with kombu kelp seaweed, or this Seaweed Salad with Toasted Sesame Dressing with all different colors of seaweed.

Just as with salads, seaweed can add a flavor to soups that no other ingredient can match. Arame is added to this No-Bone Broth while this Tom Yum Soup gets its seaweed in the vegan fish sauce added. A salty nori sheet is broken up and added to this Rich Soba Soup while a handful of wakame adds the umami to this Green Tea Soup With Roasted Eggplant (Ochazuke). 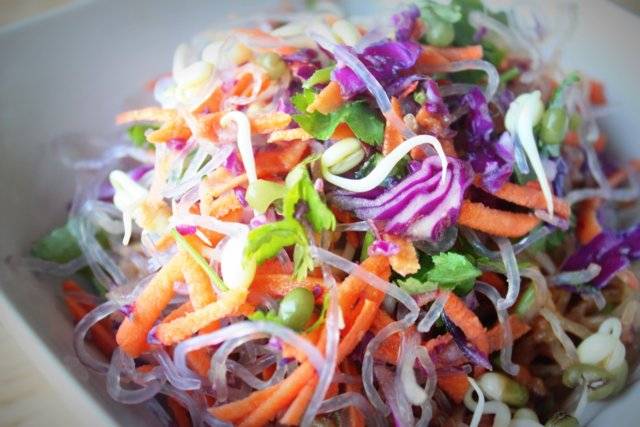 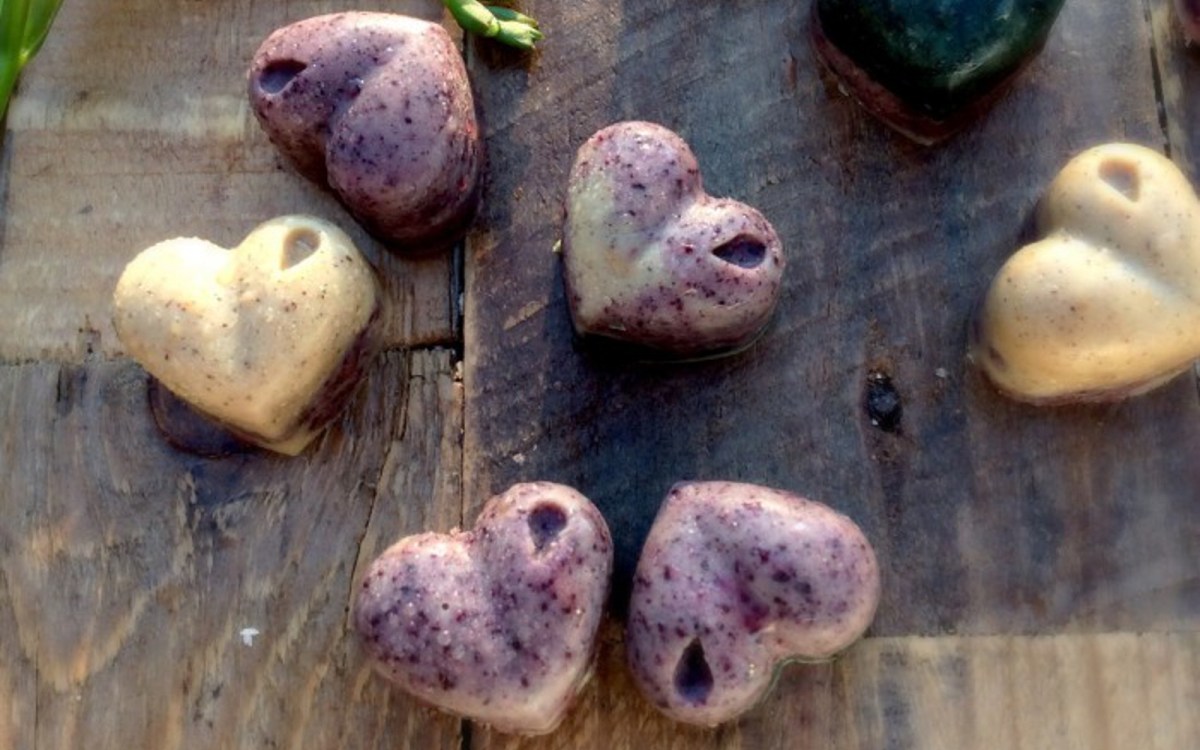 Spirulina is a blue-green algae that grows in clean water and it’s a superfood! As previously mentioned, it is high in protein, B-vitamins, and antioxidants as well as other nutrients. Spirulina has been used as a source of food since the 9th century and today it is used around the world as a nutritional supplement and to treat illness. Even NASA considers it a superfood because astronauts can cultivate it in space and ensure their complete nutrition! To learn more about spirulina, read the Top 5 Reasons You Need More Spirulina in Your Life and Chlorella Versus Spirulina: A Showdown of the Green Algae Superfoods.

Spirulina can be an ingredient in your recipes – sprinkled on popcorn, added to smoothies, or even put into desserts to make them healthier. Try it for yourself by making these Blueberry Spirulina Chocolates, Spirulina Smoothie, Raw Punsch Rolls, Mint Chocolate Chip Ice Cream, and even this Marshmallow Cream Cake. Get more recipes in How to Sneak Spirulina into Tasty Recipes for a Nutrient Boost.

Agar-agar is the seaweed you turn to when you want to make vegan versions of marshmallows, gummy bears, preserves, and other recipes that usually require gelatin, which is not vegan. Agar, also known as agar-agar, is a mix of carbohydrates extracted from seaweed, specifically Red Sea algae. It’s also known by its Japanese name, Kanten. Agar-agar has no flavor, odor, or color so it’s helpful as a culinary ingredient. It can be used to substitute for gelatin, thicken soups, and make jams and jellies, ice cream, and other desserts that need to set.

Agar has no calories, no sugar, no carbs, and no fat. It is a good source of fiber, calcium, and iron and is free from soy, corn, gluten, yeast, wheat, starch, milk, egg, and preservatives. Agar is said to help digestion and help detoxify the body by acting as a mild laxative. It absorbs bile and is believed to help the body dissolve more cholesterol. It passes through the digestive system quickly and inhibits the body from storing excess fat. Other health benefits associated with agar are inflammation reduction and improved respiration. To learn more, read Everything You Ever Wanted to Know About Agar-Agar.

Now how do you feel about cooking with and eating seaweed? If you thought that algae were just something at the bottom of a fish tank, think again. Seaweed is healthy and delicious. It adds savory, salty, umami flavor to our dishes that will make you want to eat it all the time.