10 Foods That Pair Well With Dill 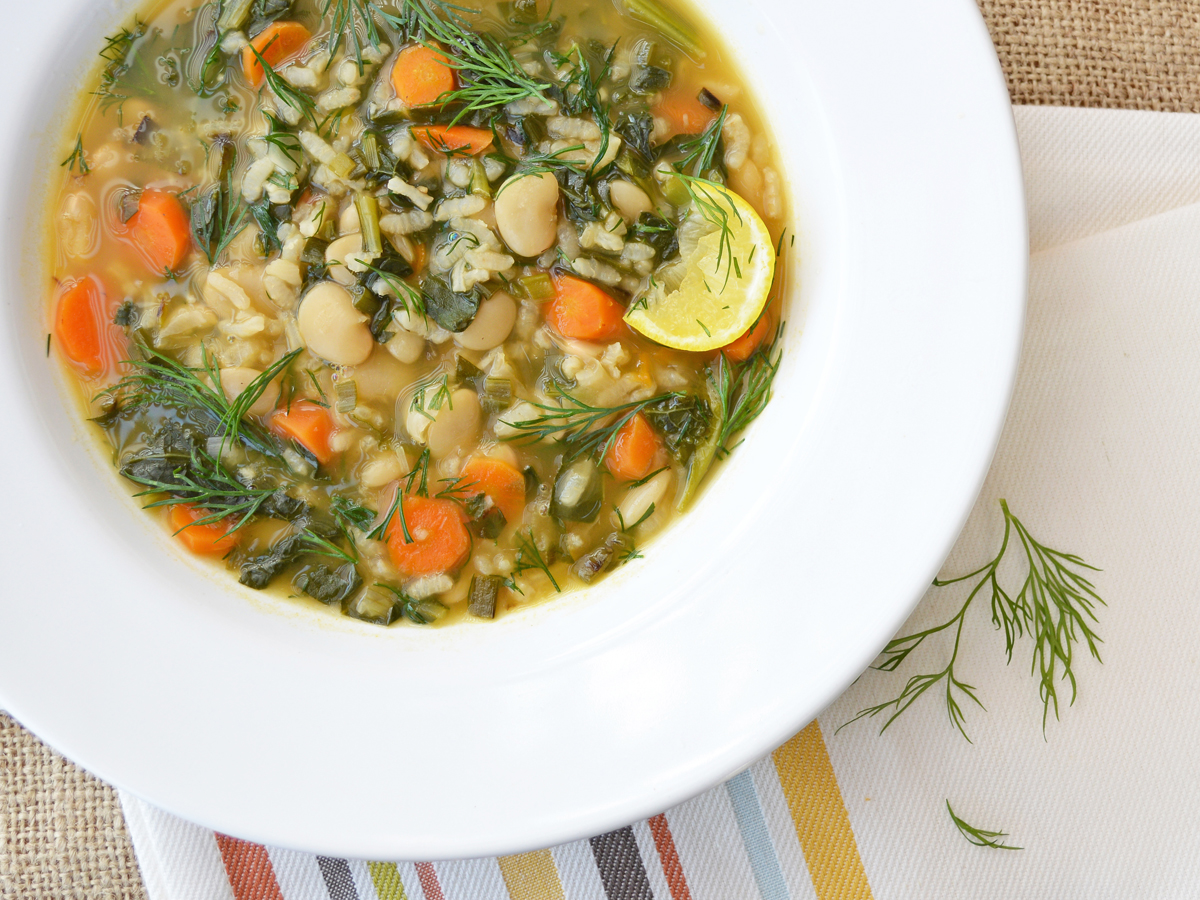 Let’s play word association. When I say “dill,” what’s the first word that comes to your mind? I bet it was pickles. Everyone knows about dill pickles. But what else can you do with dill? There must be something since dill is one of the herbs you can buy fresh in supermarkets year-round. So let’s take a closer look at dill. Dill is a very pretty herb with feathery leaves or fronds. It has a fresh, grassy flavor that is often referred to as anise-like. Dill brings out the flavors of other herbs. It can be overpowering if you use too much, especially if it doesn’t get cooked.

Dill comes in dried form as well as fresh. A member of the parsley family, dill is sometimes also called dill weed. Fresh dill is often added to seafood dishes, yogurt sauces, vinegars, potato salads, fresh-baked breads and soups and it can also be used as a garnish like parsley. It is a commonly used herb in Middle Eastern and North African cuisine. Dill seed is often used in pickles, crackers and breads. Obviously, we should be using dill more often in our cooking. Let’s look at more foods that pair well with dill.

Dill works well with hearty foods such as potatoes which is why this herb is commonly found in potato dishes, both hot and cold. I use dill in my Dijon Grilled Potato Salad with Arugula that can be eaten warm or cold.

Start with 1 ½ lbs. of red and Yukon potatoes and cut them in halves. Cut any larger ones so that all the potatoes are the same size. In a medium-sized saucepan, parboil the potatoes until they are just fork-tender but firm. Allow them to cool to the touch. Meanwhile, prepare the dressing by combining 2 Tbs. Dijon mustard, 2 Tbs. apple cider vinegar, 2 Tbs. agave nectar or sugar, 2 Tbs. extra-virgin olive oil, 1 tsp. dried or 1 Tbs. fresh dill, and salt and pepper to taste. Mix in 1 Tbs. of capers and set the dressing aside. Grill the potato halves on a grill pan over medium-high heat. Cook about 4 minutes or until they are browned, turn them over and cook the other side. Try to get nice grill marks on them. Toss the potatoes in the dressing so they are well-coated. Add ¼ of a small red onion, thinly sliced, and 2 chopped ribs of celery and toss everything together. I like to serve this potato salad over a bed of arugula which will wilt a bit from the warm potatoes. For more potato recipes, try this this Potato Salad with Cilanto, Dill, Tomatoes and Raw Mayo and these Lemon-Dill Roasted Potatoes.

Dill works well with grains such as barley, quinoa, wheat berries, couscous and bulgur. I make a Rainbow Quinoa Tabbouleh which is my gluten-free version of the Mediterranean dish. The rainbow effect is from all the colorful veggies I put into it.

Cook 1 cup of quinoa until it is soft and fluffy and let it cool in a bowl. Add to it 2 seeded and diced cucumbers, 3 seeded and diced plum tomatoes, 1 small seeded and diced yellow bell pepper and 5 finely chopped scallions. Mix in 1 cup of chopped fresh parsley, ¼ cup fresh mint and ¼ cup fresh dill. In a small bowl, make the dressing by combining 3 Tbs. olive oil, 3 Tbs. fresh lemon juice, 1 tsp. kosher salt and ¼ tsp. black pepper. Toss the quinoa salad with the dressing and taste for any seasoning adjustments. Refrigerate until ready to serve. Another grain dish to try is this Brown Rice Salad with Dill.

Dill is often used in seafood dishes such as salmon, shrimp and tuna. It works just as well in the plant-based versions of these dishes. In fact, to make delicious vegan seafood, you should use flavors that are usually used in seafood dishes such as lemon, seaweed and dill. Add dill to this Vegan Mock Tuna Salad, Chickpea “Tuna” Salad, and this Tempeh Tuna Salad. If you prefer your vegan tuna hot, try this Vegan Chickpea Tuna Melt and this Vegan Tuna Casserole. Use dill in these Vegan Crab Cakes with Sweet Balsamic Mayo and these Tempeh “Crab” Cakes. Dill adds that authentic touch to this vegan Gefilte “Fish.”

Speaking of vegan seafood, dill is perfect in creamy dressings such as tartar sauce. When you make vegan “fish” and chips, whip up a quick tartar sauce by mixing one cup of vegan mayo with 2 tablespoons of unsweetened pickle relish and the zest and juice of a lemon. Season it with salt, pepper and either fresh or dried dill. Make a Horseradish-Dill Mayo that’s as easy as adding 3 teaspoons of prepared horseradish, one teaspoon of dried dill, one teaspoon of hot sauce, and a few scallion greens to some vegan mayo. Enjoy these delicious Cajun Quinoa Cakes with a Lemon-Dill-Sriracha Remoulade. Top your Mediterranean dishes with this Vegan Coconut Yogurt Tzatziki Sauce or make these Tempeh Gyros with Tofu Tzatziki Sauce.

Dill is a tasty addition to soft cheeses. It’s commonly used with feta in Greek dishes so it only makes sense that it would be delicious in this Vegan Almond Feta Cheese too. Try dill in this amazing Vegan Cashew Dill Cheese and this beautiful Herb-and-Nut-Encrusted Cheese Log. The next time you want something yummy on your bagel, make this Cashew Coconut Cream Cheese and mix fresh dill into it for extra flavor.

Dill is often found in egg dishes such as scrambles, deviled eggs and frittatas. Well, we don’t need eggs to make these types of dishes and still enjoy the herby taste of dill. Tofu scrambles are a blank canvas for any types of herbs and spices you desire. Make a simple scramble and simply flavor it with fresh herbs including dill. Read my 7-Step Guide to Making the Best Tofu Scrambles and then try any of these 8 Ways to Make Tofu Scrambles. Add a sprinkle of dill to this Eggs Benny and Flo, the Perfect Vegan Sunny Side Up Fried Egg, and this Vegetable Frittata.

The fresh herby taste of dill works well with veggies and other greens. I like to add dill to my slaws and salads. My favorite coleslaw recipe is what I call my Color Slaw. Instead of mayo, it has a vinegar-based dressing. In addition to green cabbage, I also add shredded red cabbage, slices of different color bell peppers and thinly sliced red onions. The dressing is really easy: combine ¼ cup apple cider vinegar with 2 Tbs. extra-virgin olive oil, 1 Tbs. of sugar or agave nectar, 1 Tbs. fresh dill or 1 tsp. dried dill, 1 tsp. celery seed and salt and pepper to taste. This slaw is light and tasty, perfect on the side of your favorite sandwiches.

The slight bitterness of kale and the acidity of tomatoes work well with dill so add some to your kale and tomato dishes like this Spicy Kale Pesto with Zucchini Noodles and this Kale and Grilled Tomato Salad. Use dill to make the sauteed onions for this Vegan Tempeh Reuben Sandwich.

Dill has a delightfully fresh and citrus-like flavor which makes it pair well with lemon. Use it in these Jicama Burgers with Cumin, Coriander, Dill and Lemon. No cooking is required to make these yummy burgers either. This Spring Kale and Dill Soup with Rice gets a squeeze of lemon at the end of cooking for a bright flavor that works perfectly with the slightly bitter kale and fresh dill. Dill is also right at home in this Lemony Chickpea Salad.

Fresh dill can brighten up earthy beets so add dill to your beet recipes. When I make Borscht or Beet Soup, dill is definitely in the mix. Boil 6 red beets that have been peeled and chopped in 3 cups of salted water for 20 minutes or until fork-tender. Strain the beets and reserve the liquid. Let the beets cool and then cut them into chunks. In the same pot, heat 1 Tbs. oil and saute 1 minced red onion, 1 finely diced stalk of celery, 1 finely diced carrot and 1 minced garlic clove until tender, about 6-8 minutes. Add the beet cooking liquid, 3 cups low-sodium vegetable broth and 2 Tbs. apple cider vinegar. Simmer for about 30 minutes. Add 1 Tbs. fresh dill and kosher salt and black pepper to taste. For a smooth soup, strain the veggies out or keep them in for a chunkier soup. Serve hot or cold with a dollop of vegan sour cream. Use the beet greens to make a salad to go on the side of your borscht.

Use dill in this Watermelon Gazpacho with Beet Noodles , Braised Red Cabbage with Beets and this Grilled Beet Salad with Almonds and Dried Cranberries.

Now that we have gone through all these foods that dill pairs with, we can come back to the one that was probably your first thought: pickles. It’s easy to make your own Quick Refrigerator Dill Pickles. Quick refrigerator pickles are the type you don’t have to can or jar. In fact, I have these almost every morning for breakfast. I spread hummus on toasted brown rice bread and top it with pickled cucumbers, fresh tomato slices and raw spinach.

To make your own quick pickles, cut 8 small Kirby cucumbers into 1-inch slices and set them aside in a large bowl. In a saucepan, combine 1 cup white vinegar, 1 Tbs. sugar, 2 tsp. mustard seeds, 2 tsp. coriander seeds, 2 tsp. kosher salt, 2 cloves of garlic and a pinch of red pepper flakes. Some people like to add water to the pickling liquid so it is not as strong. If you want, add ¾ cup water to the saucepan. Cook the pickling liquid until it simmers and the sugar is dissolved. Pour the pickling liquid over the cucumbers. Add 2 Tbs. fresh chopped dill. Stir so that all the cucumbers are coated in liquid. Refrigerate for an hour before serving.

Dill is often an ingredient in pickling spices so try making your own pickled tomatoes, mushrooms, radishes or peppers. Use dill to make your own sauerkraut. Read How to Add More Pickled Foods to Your Diet.

So you can see that there are really a lot of ways to use dill besides just pickles. Read my Essential Guide to Herbs and you will see that once you start adding fresh herbs to your dishes, you will wonder how you ever ate without them.