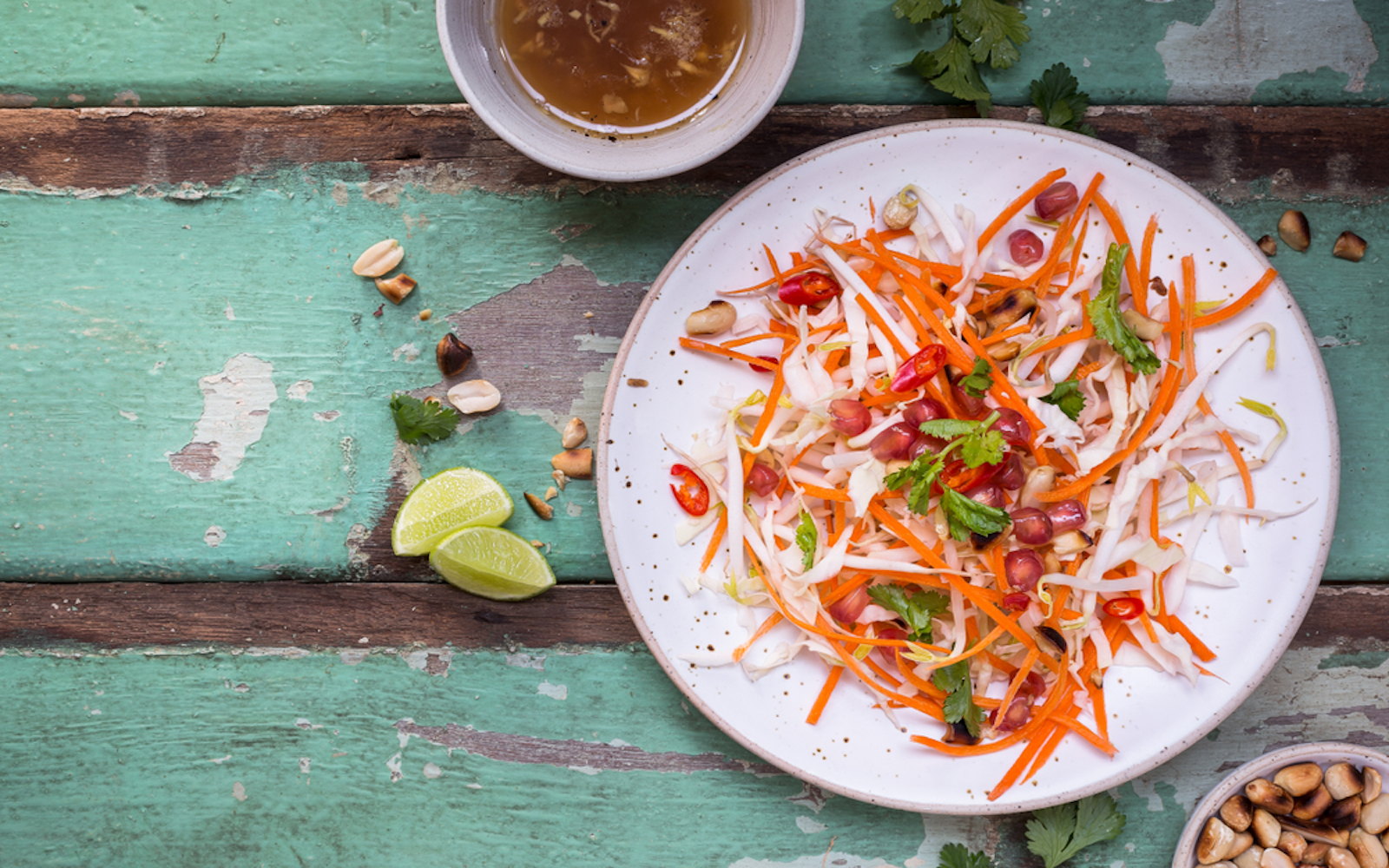 Summer is salad season and one of the most beloved types of salad is slaw. Slaws are crunchy, refreshing and colorful with tons of flavor. You can’t think about summer barbecues and picnics without thinking about slaws. Want a history lesson? Slaws are thought to have originated in the 16th-century when the Dutch popularized “koolsalade” or cabbage salad. The name was shortened to “koolsla,” the English changed it to cold slaw or cole slaw and the American South shortened it to just “slaw.”

No matter what you call them, slaws can be so much more than just shredded cabbage and mayonnaise. Different regions and countries have their own versions of slaw with different ingredients and dressings. So why not get creative with your summer slaw? Step out of the 16th century and try something new. With these tips and ideas, your summer meals won’t just be delicious, they will be slawesome! 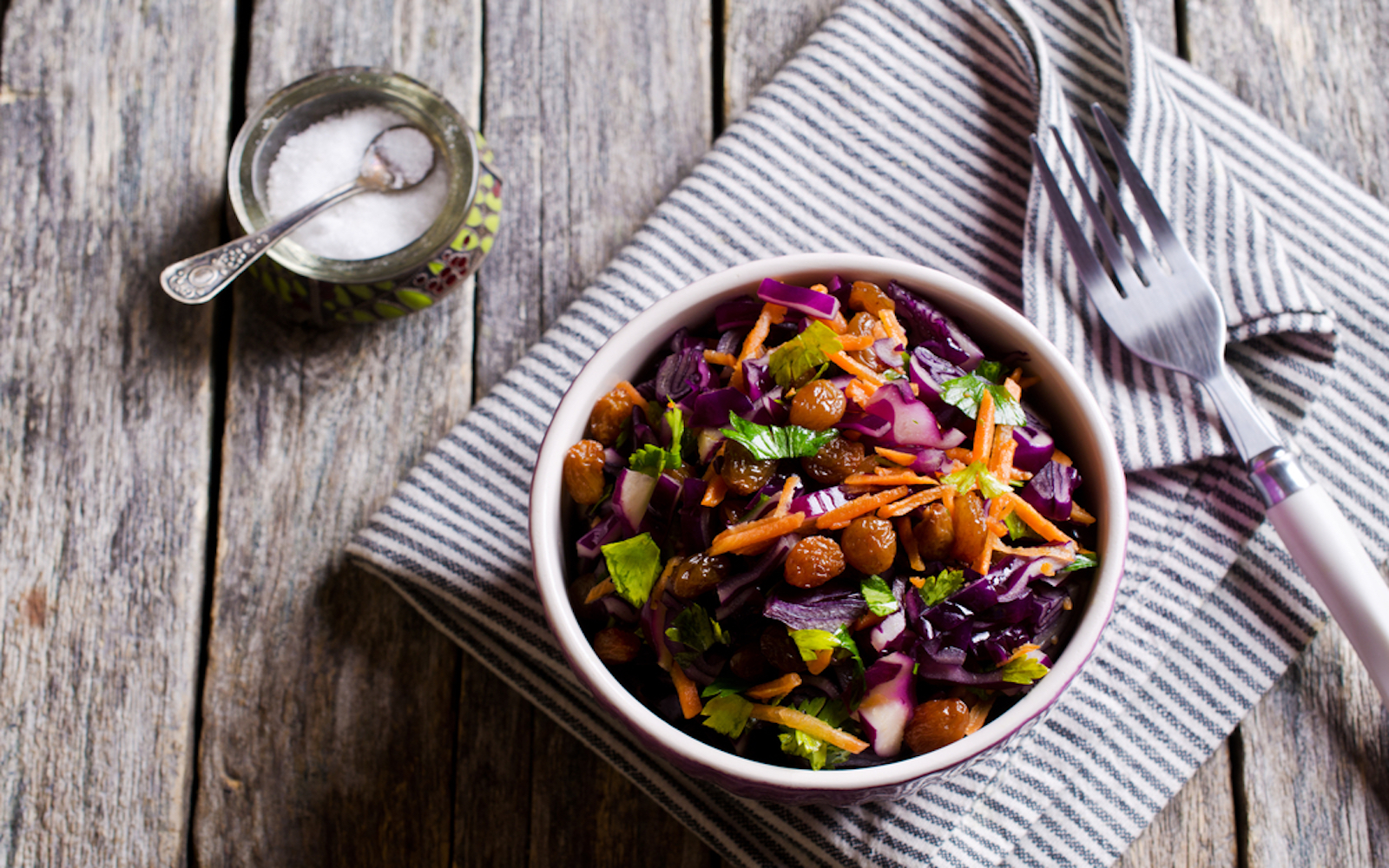 The classic coleslaw usually contains shredded green cabbage and carrots with a dressing made of mayonnaise and/or buttermilk. You can use an eggless mayo, either store-bought or homemade, or silken tofu to get that rich, creamy dressing. A simple recipe is to mix ½ cup vegan mayo, 2 Tbs. non-dairy milk, 3 Tbs. apple cider vinegar, 1-2 tsp. sugar (depending how sweet you like it) and salt and pepper to taste. Add the dressing to the shredded cabbage and carrots, toss to coat and refrigerate for a few hours before serving. This helps the cabbage to break down and become softer while the flavors marry and intensify. Serve this slaw on the side of your favorite veggie burgers.

Some people are not fans of mayo. I love mayo on a sandwich but not in my salads. My favorite coleslaw recipe is what I call my Color Slaw. Instead of mayo, it has a vinegar-based dressing. In addition to green cabbage, I also add shredded red cabbage, slices of different color bell peppers and thinly sliced red onions. The dressing is really easy: combine ¼ cup apple cider vinegar with 2 Tbs. extra-virgin olive oil, 1 Tbs. of sugar or agave nectar and salt and pepper to taste. This slaw is light and tasty, perfect for a hot summer day. Serve it on the side of your favorite sandwiches.

Brighten up your slaw with the sweet and tangy tastes of citrus fruits. Add the zest and juice of oranges, lemons or lime to a dressing of oil, vinegar, sugar and salt. Not only will it taste great but you will get the health bonus of vitamins.

Whenever I make my Tempeh “Fish” Tacos, I make my Red Cabbage Lime Slaw. Toss shredded red cabbage, thinly sliced red onions and chopped fresh cilantro with a dressing of the zest and juice of one lime, 2 tsp. sugar or agave nectar, and salt and pepper to taste. If you want to add a kick, mix in a dash or two of hot sauce. This is the perfect slaw for any Latin or Mexican dishes.

Usually, coleslaw is served on the side of barbecue dishes. How about putting the BBQ into the coleslaw?  In North Carolina, they serve barbecue slaw, also known as red slaw. Instead of mayonnaise, the slaw is made “Lexington-style” with ketchup and vinegar. You can make a similar slaw by adding ½ cup of your favorite BBQ sauce into the classic coleslaw recipe. See “10 Ways to Make Awesome BBQ Sauces, Rubs and Marinades” for some delicious BBQ sauce recipes.

Everything tastes great when it’s made Asian-style and slaw is no exception. Make a Thai slaw by combining shredded napa cabbage with shredded carrots, chopped cilantro, scallions and peanuts. Puree ½ cup of peanut butter, 1/3 cup brown rice vinegar, 1 Tbs. tamari or soy sauce, 1 Tbs. fresh grated ginger and the zest and juice of 2 limes. Add the dressing to the veggies and toss to coat. This is satisfying enough to be a main dish as well as a side.

For another recipe, try this Asian Slaw with Miso-Ginger Dressing and serve on the side of some crispy pan-fried tofu.

Whenever I make Indian food, I like to make a bright, crisp slaw to go alongside it. It only takes a few ingredients to turn a regular slaw into an Indian one. In a bowl, combine shredded green cabbage, shredded red cabbage, shredded carrots and thinly sliced scallions. Combine 2 Tbs. brown rice vinegar, the zest and juice of one lime, 1 Tbs. fresh grated ginger, 1 tsp. sugar or agave nectar, 1 tsp. garam masala, 1 tsp. ground cumin, 1 tsp. kosher salt and ¼ tsp. black pepper. Toss the vegetables in the dressing and let sit at least an hour or two before serving. This is the perfect slaw to serve alongside any Indian food, especially pakoras and curries.

I love food that is made Buffalo-style. I make Buffalo Tofu Fries, Buffalo Tempeh Meatballs, and Buffalo Seitan. If someone dipped my sneakers in Buffalo sauce, I would be tempted to eat them. It’s no surprise then that I love the idea of a Buffalo Slaw. Make the classic coleslaw but add some thinly sliced celery to the veggies and up to ¼ cup of hot sauce to the dressing, depending how hot you want it. Crumble vegan cheese on top and invite me over.

There is no better time for fruit than summertime. Take advantage of the seasonal bounty and add fresh fruit into your slaws. Toss in slices of crisp, tart apples. Mix in juicy, sweet slices of mango or papaya. Add orange segments, diced pineapple, fresh grapes and sweet raisins.  Try this Apple Slaw that tops a delectable Grilled Buffalo Tofu Po’ Boy and be ready to be amazed.

Coleslaw is already filled with healthy cabbage and carrots but we can add even more vegetables to the mix. Supplement the cabbage with crunchy kohlrabi and turnips. Add in thinly sliced asparagus or shredded radishes and beets.  Mix in charred fresh corn from the cob and quartered grape tomatoes. My favorite veggie add-in is broccoli. First, use a peeler to make julienne slices from the broccoli stalks. Second, add small florets into the slaw. I prefer the vinaigrette dressing mentioned in the second step. Broccoli slaw is not only delicious but it’s extra-filling and satisfying.

10. Swap Out the Cabbage

Yes, technically coleslaw is a cabbage dish but that doesn’t mean we can’t step outside the box and use something different (and I don’t just mean red cabbage). Try making a slaw with shredded radicchio or julienned jicama. Julienne a bulb or two of fennel and shred a few zucchinis or summer squash. Shred 6 cups worth of Brussels sprouts or thinly slice bok choy. Here bok choy is mixed with Asian flavors to make this Chinatown Sweet and Sour Bok Choy which can be served hot or cold.

For an Italian spin on slaw, replace the cabbage with shredded kale and apple matchsticks. Make a dressing of extra-virgin olive oil, fresh lemon juice or red wine vinegar and sprinkle with vegan parmesan. Now you have a delicious kaleslaw.

Classic coleslaw is great but when you use your imagination and get creative, you can have a different vegan slaw for each day of summer. What are your favorite ingredients for slaws? Let us know in the comments.