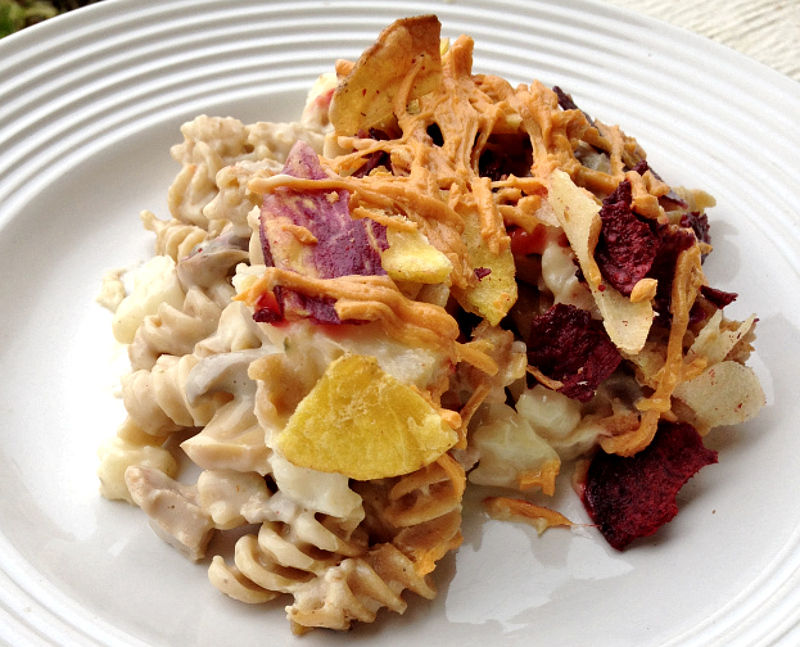 Tuna casserole is a favorite among many, but it is so non-vegan. With all the unnecessary cream, milk, cheese, and tuna in the original recipe, it is intimidating to think of how to remake this old fave into one that is not only acceptable but can really be called vegan. I made this from scratch with a roux of vegan butter, oat flour, and almond milk, more along the lines of a homemade macaroni and cheese. I added two types of vegan cheese, pepper jack in the roux and cheddar on top. I also used meatless select tuna, and was so wonderfully surprised with the texture, smell, and flavor of it! So good! I also used actual vegetable chips as a topping and it was so pretty with all the different colors! Also for good measure, I added a bag of chopped frozen cauliflower which adds its own flavor and pairs well with both cheeses.

Megan Teet is a full time admin assistant, writer, virtual assistant and the coolest aunt ever.  She is a west coast girl who recently moved to Texas, started school and is working hard each day fitting in to vegan.  On her blog, Fitting Into Vegan, she writes recipes to help get from vegetarian to vegan while trying to keep the cost down and making the recipes last.