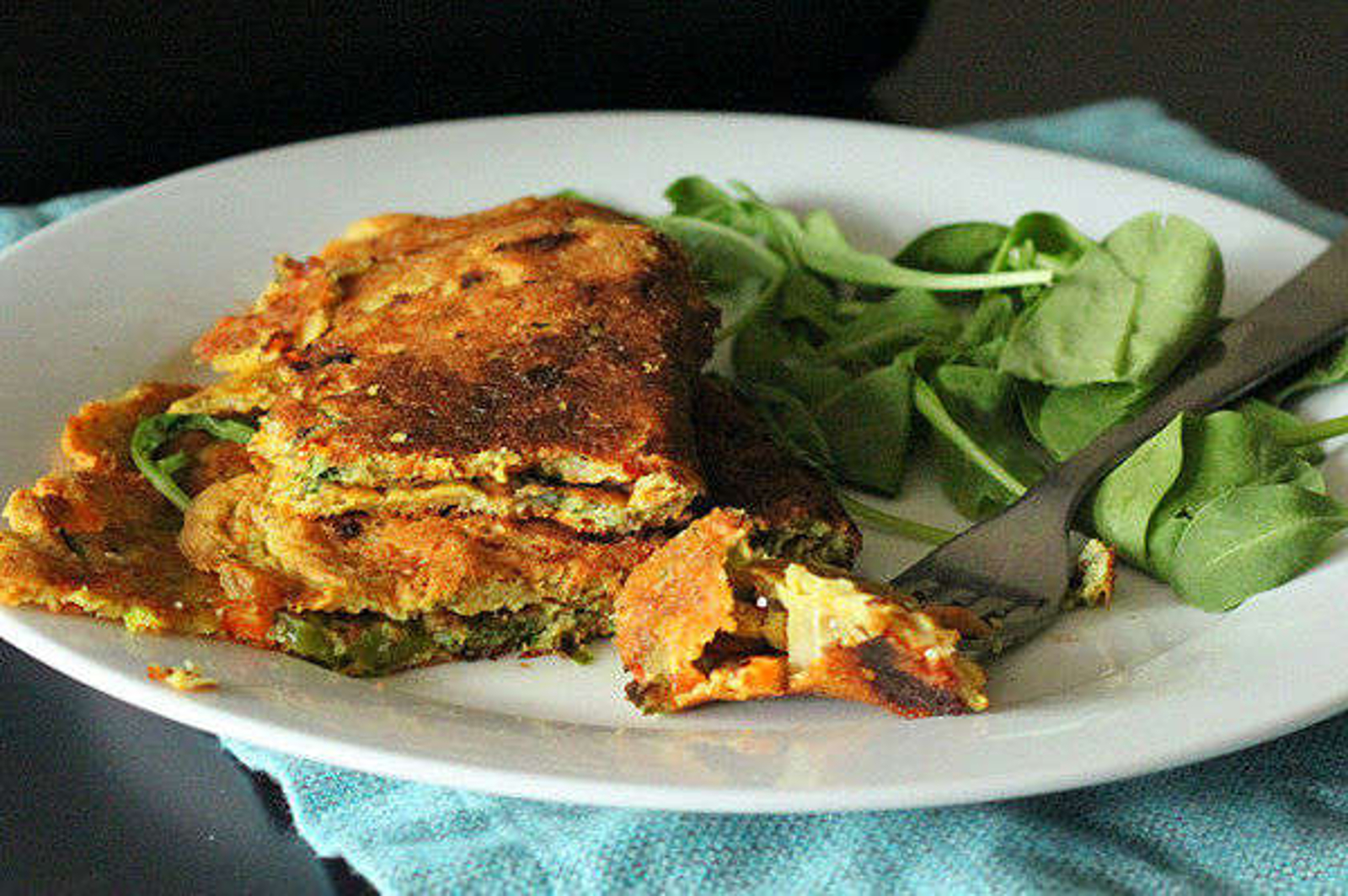 This article could very well be titled “Yet Another Vegetable I Refused to Eat as a Child But Cannot Live Without Now.” It didn’t matter what Popeye said in the cartoons I watched, I would not eat my spinach. When my sister would mix her spinach into her mashed potatoes, I thought she was nuts. Yet today, spinach is one of my favorite greens and we go through a lot of spinach in my house. My dog, Benny, and I eat raw spinach almost every single day.

My go-to breakfast is red rice or millet toast with garlic hummus, topped with raw spinach, tomatoes, and pickled cucumbers. Benny gets his spinach mixed into his food. These dark, leafy greens are available year-round and are filled with vitamins and nutrients such as folate, lutein and vitamin E.

While I do love raw spinach, I also love cooking with it. Spinach is so versatile; you can add it to practically any dish. It works in salads, soups, pastas, dips or on its own as a healthy and delicious side dish. Here are some of my favorite ways to cook spinach:

Spinach works wonderfully in soups. It cooks up quickly and it adds color, nutrients and flavor. A simple tomato soup becomes Tomato Florentine when you add spinach. I always add a big handful of greens to my Minestrone and Pasta e Fagioli to balance out the beans and pasta. Spinach can also be the star of the soup. Just saute onion and garlic in a pot. Add a potato for non-dairy creaminess, fresh or frozen spinach and vegetable broth.

Simmer until the potato and the spinach is cooked and tender. Blend the soup until smooth and add fresh herbs such as cilantro, parsley or mint. For a touch of heat, I sometimes add a pinch of red pepper flakes. For an Indian flavor profile, try this Creamy Spinach Soup that takes just 15 minutes to make and is packed with fragrant spices. Or, go for this Red Lentil Spinach Soup for a yummy lunch.

Perhaps one of the most popular ways to eat spinach is when it’s made into Spinach and Artichoke Dip. I came to love this dip on my honeymoon when a restaurant served it over thin chips made out of pizza dough.

Try this Creamy Artichoke Spinach Dip or if you prefer, try this chunky Spinach Artichoke Dip that gets baked in the oven until the melty, bubbly dip is covered with a golden, crispy crust. Butter beans, tofu and almond milk join spinach to make this Italian Baked Spinach with Vegan Ricotta and Nutmeg Dip while silken tofu and Indian spices create this spicy, exotic Indian Saag Dip.

Spinach makes an amazing pesto that has a heartier flavor than using basil alone. For my Garlicky Spinach Pesto Sauce, I use 3 cups of spinach, 1 cup of basil and ¼ cup of fresh mint for that brightness and distinctive fragrance. I combine these leaves with garlic, walnuts, lemon juice and vegan grated parmesan (you can use nutritional yeast) and process with extra-virgin olive oil until I have a smooth pesto. After boiling the pasta, I reserve a cup of the starchy cooking water to loosen the pesto into a pasta sauce in a skillet where I have already sauteed broccoli and grape tomatoes in garlic oil. Then I add the penne to the skillet and toss to coat with the pesto sauce.

The sauce thickens as it cooks. I serve this pasta with garnishes of fresh parsley and more vegan grated parmesan for a bright, light and amazing dish. Another spectacular recipe is this Ramp and Spinach Pesto Pasta. When you make spinach pesto, make extra since you can keep it in the fridge and use it in lots of ways all week – as a spread for sandwiches, on crostini or even as a pizza sauce.

Cooking spinach on the stove top is a fast and easy way to enjoy this dark, leafy green. The recipe can be as simple as sautéing the spinach with garlic in olive oil and topping it with a bit of lemon juice. I always add a pinch of red pepper flakes for some heat. A heartier recipe is this Sauteed Spinach in Fennel Tomato Sauce, where the spinach is cooked with the flavors of cumin, cinnamon, chiles, garlic and ginger.

To stir-fry, heat some sliced or slivered garlic in olive oil, throw in a ton of spinach and stir-fry until hot and wilted. Season it with tamari and a garnish of sesame seeds. Check out these 10 Creative Ideas to Stir-Fry and Sauté Spinach!

As I wrote in my opening paragraph, I eat raw spinach almost every day for breakfast – spinach, tomatoes and cucumbers on top of gluten-free toast with hummus. There are lots of breakfast and brunch dishes that benefit from spinach and in turn, we benefit from eating dark, leafy greens for breakfast. Spinach is one of my favorite fillings when I make chickpea omelets. Usually I saute mushrooms, onions and bell peppers, and before I fold over the omelet, I add raw spinach and vegan cheese. The spinach wilts in those final minutes of cooking time.

Tomorrow morning, try this Chickpea Flour Omelet with Spinach, Onions and Bell Peppers for yourself. Another breakfast/brunch idea that I love to make is a tofu frittata; it’s like an elegant tofu scramble. Frittatas can have whatever fillings you want and my favorite combination is chopped spinach, artichoke hearts and vegan mozzarella.

Try adding a few cups of spinach to this Vegetable Frittata recipe. To really impress your guests at your next brunch, serve my Spinach, Tomato and Cheddar Mini-Quiches with Lemon Cashew Cream. They are not only adorable but delicious too.

Did you know you can use spinach in baking? While I am not a fan of hiding veggies in foods rather than teaching children to love vegetables, I am totally on board with adding greens whenever possible. Up to a cup of pureed spinach can be added to cake and brownie recipes for a nutritional boost that will make you feel better about eating dessert. There are also savory baked spinach dishes where the green is not hiding, but shining loud and proud.

These Savory Whole Grain Spinach Biscuit Muffins are perfect on the side of a bowl of chili or to help soak up any extra gravy. In this vegan Spanakopita, spinach and rice (instead of feta) are baked in layers of homemade phyllo dough. For a hearty dish that can be the centerpiece of your dinner table, this Butternut Squash, Portobello and Spinach Casserole with Vegan Sausage will definitely fit the bill.

There always has to be one category where we take the uber-healthy food and do something to make it a bit less healthy. Or we can see the glass as half-full and say we are making fried food healthier by adding spinach to it. Either way, spinach tastes great fried. One of my favorite ways to fry spinach is to make pakoras. Spinach leaves are dipped in a batter of chickpea flour, white rice flour and spices, then deep-fried until crispy. It’s absolutely amazing.

Another way to enjoy fried spinach is in my Greek Latkes which are part of my global latke collection. I combine the traditional potatoes and onions with the Greek flavors of sauteed spinach, lemon, garlic and vegan feta cheese. After they are fried and crisp, they get dipped in a cool, refreshing cucumber Tzatziki sauce. I am so in love with black-eyed pea fritters, I could eat them every day. This recipe for Black-Eyed Pea and Spinach Cakes makes that very tempting.

8. With or Without Pasta

Spinach works beautifully with pasta dishes – the fresh, green flavor helps cut the richness of the dough, sauces and vegan cheeses. Spinach can be added to any pasta dish to bump up the nutrition and the flavor. For example, this Creamy Pumpkin and Spinach Lasagna is packed with protein, fiber and vitamin A.

One of my most decadent recipes is rolled up in lasagna noodles with artichoke hearts and vegan mozzarella to make Spinach and Artichoke Rollatini. Spinach can be stuffed into ravioli or you can forget the pasta altogether and make my Spinach Tofu Gnudi Balls. Gnudi balls are “naked ravioli” – you get all the filling of the ravioli but without the dough. Excuse me while I try to stop drooling.

Spinach, or palak, is a common ingredient in Indian dishes. I have already mentioned pakoras and Indian Saag Dip. In this Indian Cashew Spinach dish, spinach is cooked with coconut milk and mango powder to create a thick, flavorful saag that can be served over tempeh or on its own.

I can’t think of anything more comforting than sitting down to a dish of potatoes and spinach. This Flashworthy Alu Palak (Curried Comforting Potatoes with Spinach) is aptly named. Seasoned with cumin, ginger, chiles and tomatoes, it’s a beautiful addition to any Indian feast.

Since spinach adds flavor, but is not overpowering, it can be added to almost any dish to bulk up the nutrition as well as the yumminess. Spinach is a welcome addition to this Cheezy Spinach and Cilantro Rice dish since its fresh green taste complements the richness of the vegan cheese. Swap out lettuce for the more nutritious spinach as in these Tacos with Spinach, Mushroom, Potato and Caramelized Onions.

Spinach Stuffed Mushrooms with pine nuts, tomatoes and balsamic vinegar make a delicious Mediterranean appetizer while these Colcannon Quesadillas celebrate Irish-Mexican fusion. Shake up your usual side dishes with this Warm Potato Salad with Spinach and Chickpeas.

Use spinach instead of lettuce to top your burgers and sandwiches. Add spinach to a vegan grilled cheese or to your tofu ricotta. Top your pizza with cooked or fresh spinach as in this Raw Vegan Pizza with Spinach, Pesto and Marinated Vegetables.

That’s a lot of ways to enjoy spinach, and I didn’t even mention how much I love warm spinach salad with tempeh bacon. Well, I guess I just did. Be sure to stock up on lots of spinach because once you start adding it to some of your dishes, you will want to add it to all of them.