10 Tips for Cooking With Artichokes 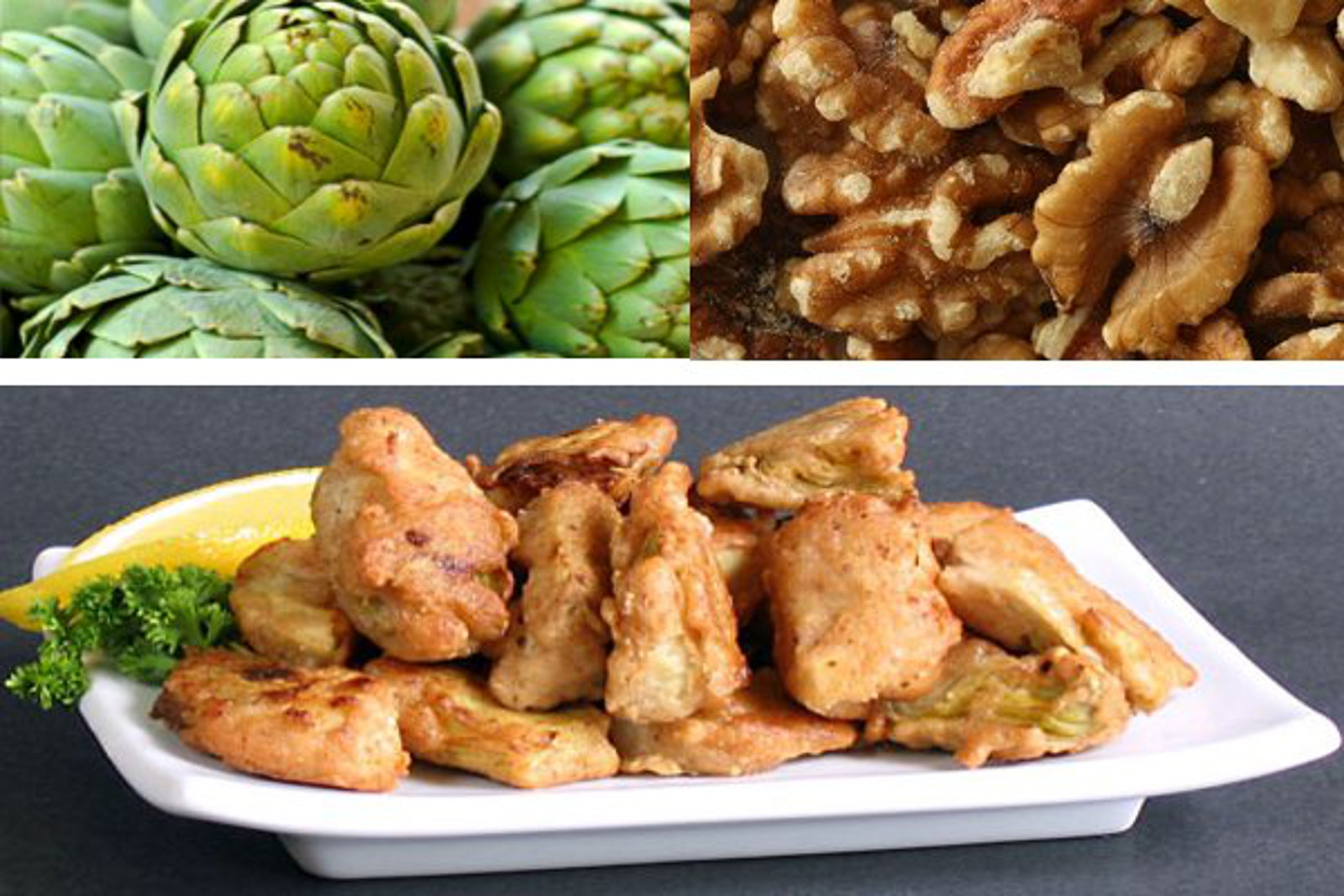 How many times have you’ve shopped for produce, seen an interesting looking vegetable that you were tempted to buy, but then thought, “What the heck will I do with this?” If there is one vegetable that may elicit that response more than others, it may very well be the artichoke. When I was a kid, my mother made steamed artichokes stuffed with sauteed bread crumbs and seasoning. I thought it was fun to pull off the leaves and eat the stuffing but contrary to my mother’s instructions, I did not want to use my teeth to scrape the “meat” off the leaves. And unlike my father, I did not want to work my way down to the heart of the artichoke.

There wasn’t even any stuffing there! Today, like so many other foods I swore I hated, I love artichokes. In particular, I adore artichoke hearts and eat them all the time. Artichokes might look pretty intimidating, but they are really just edible flowers that need a little TLC to become delicious dishes. Here are my tips on how to choose, prepare and cook these beautiful artichokes:

Lift a few artichokes up to compare the weight. Select an artichoke that feels heavy and solid; lighter ones are older. The leaves should be thick, tightly closed and have a vibrant, deep green color. The leaves should squeak when you rub them together. Avoid artichokes that have opened, dry or split leaves. Generally, the smaller the artichoke, the more tender and sweet it will be. However, larger artichokes will have larger hearts and the hearts are the sweetest part of the artichoke. You can also buy baby artichokes which are tender, sweet and are easier to prep than the full-size ones. Store the artichokes in the refrigerator where they will keep for up to a week.

Preparing the artichoke for cooking is the most time-consuming part of using this veggie. Once that’s done, the rest is easy. Rinse the artichokes in cold water to get out any grit that is between the leaves. Prepare a large bowl of cold water with the juice of a lemon squeezed into it. Use a sharp knife to cut off the stem so the artichoke can stand flat (unless you want to keep the stem; in that case, trim and peel it). Cut about 1 inch off the top of the artichoke. Snap off any tough, dry leaves around the stem area. Using kitchen shears, trim about ¼ to ½-inch off the thorny leaf tips. Leave the artichoke whole if you plan to steam it or stuff it. If you are cooking it other ways, you may cut the artichoke in half lengthwise. Lastly, you have to remove what is called the “choke.” The choke is a bundle of white and purple leaves and below those leaves is a bed of hairy-looking filaments. You want to remove that completely or it will make you…yes, choke.

Literally. The choke can be removed before or after steaming the artichokes. Remove the inner sharp leaves in the center and scrape out the center fuzzy choke with a spoon, paring knife or melonballer. After you remove the choke, you will have reached the treasure of the heart which you can cut into pieces and eat or use in a variety of recipes. Submerge the artichoke into the lemon water while you prepare the rest of them and until ready to cook. This will prevent the leaves from browning.

You can now eat the artichokes as is, proceed to use them in another recipe or work your way to the artichoke hearts. If you plan to eat the artichoke as is, pull off the outer leaves and scrape off the meat with your teeth. For added flavor, dip the leaves into an awesome dipping sauce such as a roasted garlic or red pepper aioli or even just melted vegan butter. Steamed baby artichokes served with dipping sauces make for a mouthwatering appetizer.

Braising is a delicious way to enjoy the artichoke in its whole beauty, and you don’t need to boil or steam them first (though you can to make them even more tender). Simply trim medium-sized artichokes and leaving the stem intact, halve them lengthwise. Remove the choke. In a large skillet or pot, cook some onion, celery, carrots and garlic in olive oil. Add the artichokes in a single layer and season with your favorite herbs. Add a cup of white wine and enough water to cover the artichokes. Cover the pot and let simmer until tender, about 30 minutes. The artichokes will be sweet and nutty with the deep flavors from the aromatics they were cooked in.

Grilling artichokes gives them a smoky flavor. Simply slice the steamed artichoke in half lengthwise and remove the choke. Brush with olive oil and sprinkle with salt.  Place the artichokes cut side down on a hot grill or indoor grill pan and cook for about 5 minutes. Turn them and continue to cook until charred and tender. Try these healthy and tantalizing Grilled Artichoke and Quinoa Lettuce Wraps.

Artichokes can be prepared in the oven. After prepping the artichokes, cutting them in half lengthwise and remove the choke. Drizzle some olive oil, balsamic vinegar or lemon juice on them. Season them with salt and garlic. To bake the artichokes, wrap each half (or the whole artichoke) in heavy foil and place them directly on the oven rack. Bake them at 425 degrees for 60-90 minutes. Let them cool before removing the foil. To roast the artichokes, place them in a roasting pan or casserole dish with a lid that is just big enough for them to sit snugly and add some water to the pan (about 2 tablespoons water per artichoke).

Cover the pan with foil or the lid of the casserole pan and roast for half an hour at 400 degrees. Uncover the pan and continue roasting for another 20-30 minutes until browned and fork-tender. Make an artichoke crisp by roasting them as instructed above and then topping the artichokes with a mixture of breadcrumbs, salt, pepper, lemon zest, thyme, olive oil and vegan grated parmesan or nutritional yeast. Bake for 10 minutes and you will have a crispy, golden crust atop the tender, sweet artichokes.

This is my most favorite way to enjoy artichokes. Since artichokes have a somewhat neutral flavor, they can be stuffed with anything your taste buds desire. The most common stuffing is similar to the one my mother made. I prep the artichokes and while they are steaming, I make the stuffing. I saute some garlic in olive oil until it is golden-brown and starting to crisp. Then I remove the garlic and add bread crumbs, toasting them for about 4 minutes until they are browned and then turn off the heat. Lastly, I stir in vegan grated parmesan (you can use nutritional yeast), salt, pepper and fresh chopped parsley. Let the mixture cool before you stuff the artichokes.

Here is a trick to make stuffing easier: take each artichoke and place it top-side down on a cutting board or work surface. Press down gently on the base with your palm. This will make the leaves open so you can fill them more easily. With a small spoon, fill the leaves with the bread crumb mixture. Be generous and let it overflow. When you have filled all the leaves, place the stuffed artichokes in a baking dish. Drizzle them with a bit more oil and bake for about 15 minutes until they are browned and crispy. Alternatively, you could stuff the raw, prepped artichokes and then steam them for an hour and a half. Get creative and stuff the artichokes with sun-dried tomatoes and vegan cheese, quinoa and dried cranberries, or the ultimate dish, stuff the artichokes with spinach and artichoke dip!

Artichokes can be the stars of the show, or they can be part of the ensemble when you add them to other dishes. Baby artichokes are particularly good for this as they are smaller and cook faster. Artichokes work best in recipes where the ingredients will cook for some time in liquid such as rice and other whole grain dishes. Try baby artichokes in this amazing vegan Artichoke Paella and this Seasonal Quinoa Pilaf with Ramps, Artichokes and Peas.

9. The Heart of the Matter

Deep down in the very center of the artichoke lies the heart, the sweetest and most versatile part of the artichoke. Artichoke hearts are tender, nutty and when cooked, they become creamy. You might be thinking it’s a lot of work to prep, trim and de-choke an artichoke just to get one little heart. Good thing you can buy artichoke hearts in jars, cans or frozen and all the work will have been done for you.

There is no end to what you can make with these jewels. I love to simply saute them in olive oil with garlic and red pepper flakes. Toss them with Brussels sprouts, sun-dried tomatoes and Kalamata olives for a Mediterranean dish that is delicious hot or cold. Mix artichoke hearts into salads and add them to sandwiches. Saute them in olive oil, garlic, parsley and white wine and then spread onto toasted bread for an incredible bruschetta. The most amazing soup I ever had was a vegan roasted artichoke bisque that was smooth, creamy and rich with artichoke flavor.

Sunchokes are easy to cook too. You don’t even have to peel them; just scrub them clean. Heat caramelizes their sugars which gives them a sweet, nutty flavor and velvety texture when cooked. Alternatively, you can eat them raw by shredding them into a slaw. Slice them super-thin and bake them with rosemary to make healthy sunchoke chips. My favorite way to eat them is to roast them in a 425 degree oven tossed with olive oil, garlic, salt and pepper. I cooked them with parsnips and bell peppers in my dish Roasted Jerusalem Artichokes with Braised Garlicky Kale. Yum!

I hope after reading this that you are more hungry and less intimidated by cooking with fresh artichokes. Once you get used to it, the process goes much faster the next time. Artichoke hearts are amazing and you should cook with them every chance you get, but don’t cheat yourself out of the sweet, nutty goodness of the rest of the artichoke.  This vegetable is beautiful to look at, fun to eat, healthy and delicious.