Shut the Front Door! If We Ate Less Meat, This Is What Would Happen to the Planet 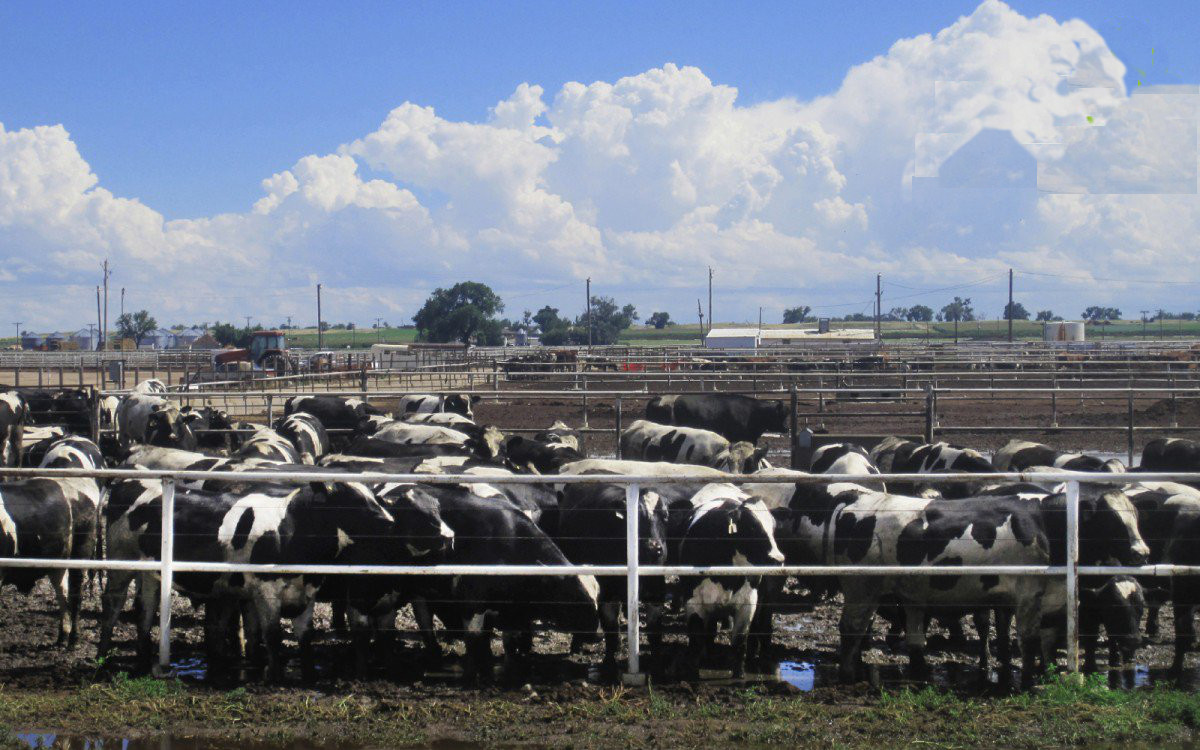 More and more studies are showing that consumption of animal products is one of the largest reasons for some pretty serious environmental issues today. Saying nothing about the cruelties of the industry and the disastrous effects these food items can wreak on our personal health, consuming meat in the quantities that we do is impacting the environment on a global scale.

Which makes it seem all the less likely that we, as individuals, can make a difference, right? Isn’t the problem too vast and the damage too far gone?

We each have the ability to make a huge difference!  It’s never been more imperative for us all to reexamine our individual choices and the impact they have on the earth around us. We are the consumers and ultimately, we have the power to change the way industries operate. By reducing, or perhaps even eliminating one of these (or heck even all of them if you wanna go ultra, mega Green Monster), you can make a very real difference. It’s never been a better time to ditch the meat and here’s why.

This land is your land…if you are a COW!

Did you know that beef eaters use 160 percent more land resources than people who eat a plant-based diet? Here’s why:

It’s estimated that between 2006 and 2050 the world population will increase 35 percent. That will push the number of humans on the planet to over 9 billion. After 2050, the general consensus had been that the world population would stabilize, but recent studies are now saying that’s not the case. Instead of global populations slowing down, we’re expected to keep growing to an anticipated 11 billion by 2100.

With so much land currently being used to raise livestock or the food to feed them, it’s a constant challenge to find adequate pasture land to meet demand. This means that producers have had to create pastures where there weren’t any originally, with world forests being a popular choice. Currently, 260 million acres (and counting) of U.S. forests have been clear-cut to create land used to produce livestock feed, and  80 percent of the deforestation in the Amazon rainforest is attributed to beef production.

So, what do we get out of this deal? For the price of one acre of land, we get a yield of 250 pounds of beef. You may say to yourself, “Hey, that seems pretty good. That’s, like, 1000 quarter pound hamburger patties per acre!” When you consider that the same amount of land can produce 50,000 pounds of tomatoes, up to 53,000 pounds of potatoes or 30,000 pounds of carrots  it doesn’t seem like such a great use of space anymore.

But what about protein? If we look at the amount of protein that is fully digested by humans produced per acre of land, believe it or not, we can produce more usable plant protein per acre than meat protein. An acre of land is capable of providing 36 pounds of usable protein from meat per acre while the same amount of space can put out 224 pounds of protein for rice, 94 pounds for legumes and 75 pounds for rice. The big winner of the bunch was soybeans at 263 pounds of usable protein per acre. That’s over 7 times more protein per acre than meat! If we focused more on producing plant proteins for human consumption, we could do a far more efficient job in a smaller amount of space.

There isn’t any water here…again, unless you’re a thirsty Steer.

If  just one person gave up their burgers, bacon and nuggets, that single person would save 162,486 gallons of water annually. The average human needs to drink approximately 1 gallon of clean water per day to survive. With the global population topping 7 billion people and 2.7 billion of them facing clean water scarcity, just one person’s decision to cut out meat could free up the water needed for 445 people!

Plus, with the American West suffering one of the worst droughts in its history, turning our attention to water usage has never been more important. While domestic consumption comprises 10 percent of total freshwater usage, agriculture makes up 70 percent with a third of that going to produce grain for livestock. While minimizing personal usage is always prudent, the biggest impact can be made by not including beef, pork or poultry in our diets.

Love is in the air…along with methane and way too much CO2.

The United Nations Food and Agriculture Organization (FAO) estimates that livestock production is responsible for 14.5 percent of global greenhouse gas emissions, while other organizations like the Worldwatch Institute have estimated it could be as much as 51 percent. The latter estimation is over half! This number takes into account not only the fossil fuels used to produce and transport livestock before and after slaughter, but also the other gasses that livestock produce on their own. These various gasses are referred to as carbon dioxide equivalents (CO2e) and encompass six main greenhouse gasses: carbon dioxide (CO2), methane (CH4), nitrous oxide (N2O), hydrofluorocarbons (HFCs), perfluorocarbons (PFCs) and sulphur hexafluoride (SF6).

Those numbers only tell half of the story though, as the destruction to forests have ramifications far more wide sweeping than just the lose of land to livestock production. Remember that statistic from earlier that stated 80 percent of the deforestation currently going on in the Amazon was attributed to beef production? The canopy of trees in the Amazon act as a giant carbon store, trapping CO2 that the trees have cleansed from the atmosphere inside. When those trees are chopped down to clear space for livestock, it not only releases all of that stored CO2 back into the air, it also removes valuable trees that would be helping to clean up the air and produce oxygen.

Too much CO2 in the air traps gasses and particulates into the atmosphere, contributing to climate change and pollution. It takes 9 trees one month to scrub 10 pounds of CO2 out of the atmosphere. With 2000 trees being lost to deforestation every minute  (80 percent of which are lost due to cattle production) that’s 1,600 fewer trees  to keep excess CO2 from contributing to pollution and global warming…every 60 seconds.

According to a recent study, people whose diets included high consumption of meat at an average of 3.5 ounces per day resulted in 15.8 pounds of carbon dioxide emissions. Vegetarians came in at nearly half that number with 8.3 pounds of carbon emissions from their diets. Vegans brought up the rear at a modest 6.3 pounds. This means that, annually, the heavy meat eaters are contributing roughly 5,767 pounds of carbon emissions into the environment. So, it would take 5,190 trees a month to scrub just the emissions caused by eating a meat rich diet for one person. That’s more than three times as many trees as we’re losing each minute to clear way for more beef production in the Amazon. 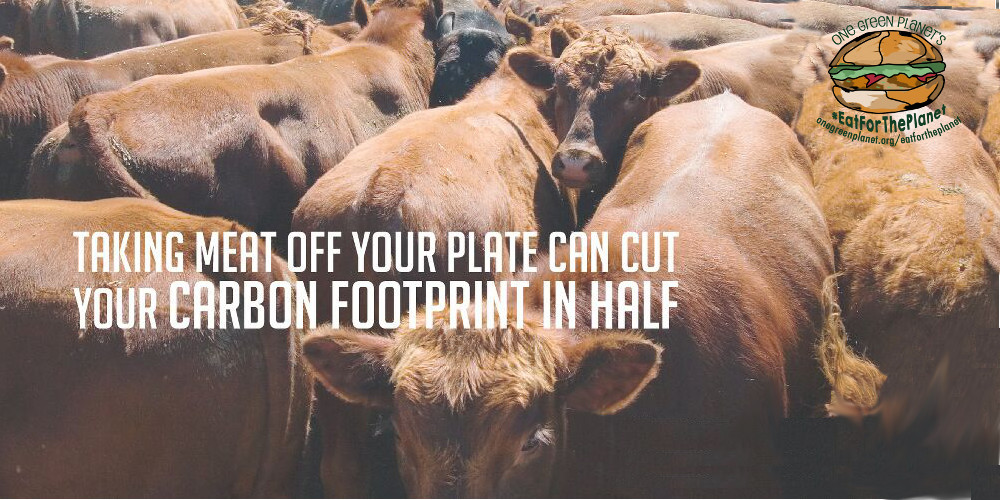 Feed the world…seriously though, we could.

There are 842 million undernourished people in the world. That means 1 in 8 people aren’t getting the food they need to live healthy lives. You may be asking yourself, how in the world can this be when we have so much land dedicated to producing crops and livestock for food – but, when you break it down, it makes perfect sense.

Worldwide, more than 40 percent of wheat, rye, oat and corn produced is fed to livestock. To produce one pound of beef for consumption by humans, it takes 20 pounds of grain while pork comes in at about 7 pounds. Poultry rounds out the group at  5 pounds of grain, but don’t let that fool you into thinking that that chicken sandwich or turkey bacon is the more efficient choice.  Annual poultry consumption in the U.S. per capita is 99 pounds, the highest of all meat consumption. Beef comes in second at 53.8 pounds per year with pork last at 45.9 pounds per year.

If each American eats an average of 99 pounds of chicken per year, that adds up to 495 pounds of grain per person to meet that demand. A person on a primarily plant-based diet will consume 440 pounds of grain per year.  Mathematically speaking, if each of the 317 million people in the United States gave up poultry alone, that grain could be used to feed roughly 356 million of the world’s hungry a plant-based diet.

That’s a quarter of the world’s hungry that could be fed for a year if Americans alone gave up chicken. If you think that number is impressive, consider the impact if we gave up all three.  The meat, including chicken, in an average American’s diet translates to roughly 1892 pounds of grain. If everyone stopped consuming meat, that would translate to enough grain to feed 1.4 billion people a plant-based diet. That’s enough to feed the world’s hungry more than one and a half times over, if we could just allocate the grain used to raise livestock for direct human consumption instead. 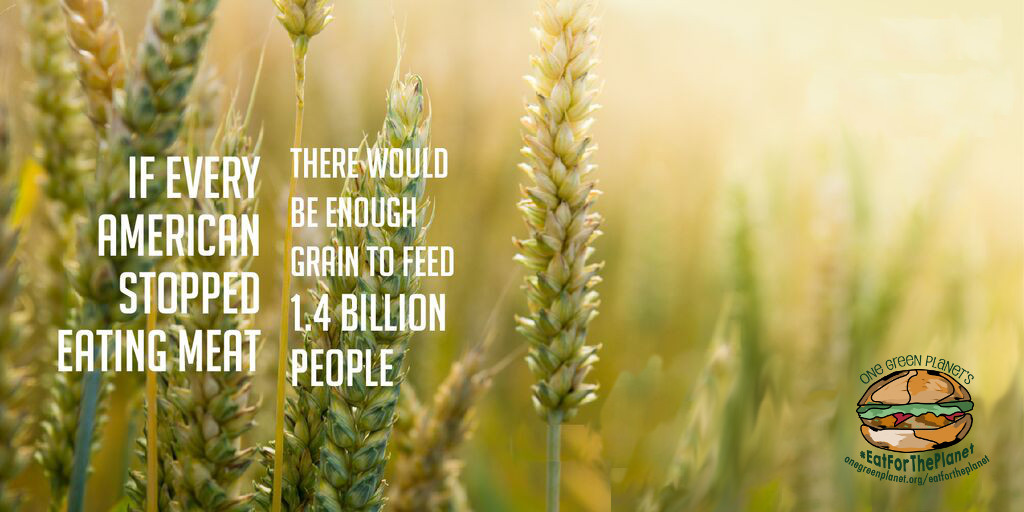 Sign me up! I wanna try out this whole “Help the Planet” thing!

It’s pretty clear that the most profound way that we, as individuals, can begin to help reduce greenhouse gas emissions, conserve both water and land and stop contributing to the misallocation of food for the hungry is by changing what’s on our plates. By taking the step to cut out beef, poultry or pork you’re helping the planet in the most measurable way possible. Eliminate all three and you’ve made an enormous difference.

So, how should you go about eating for the planet? By eating all of the delicious foods that happen to be lower on the food chain of course! Remember how high the CO2 emissions were for the production of livestock? The good news is, nuts rank very low in CO2 emissions with about one pound of the luscious little legumes producing just 2.5 pounds of CO2. Cashew mac and cheese, anyone? Lentils are even lower at 1.9 pounds of CO2 per pound, so dish up some lentil “meat” balls  and fill your belly without contributing so heavily to climate change and pollution.

Do you also remember the little tidbit about an acre of land being able to produce 250 pounds of beef or 50,000 tomatoes? In case you were wondering, about 2 pounds of tomatoes go into producing a 28oz can of crushed tomatoes so, FYI, that’s approximately 25,000 yummy vegan lasagnas. That could take awhile, you’d better get cooking. (We’ll be there around six or so.)

The choices are endless for yummy, nutritious, low environmental impact dishes that can fill our bellies without risking someone else’s going empty. If you’re not ready to go full steam ahead, maybe incorporate Meatless Monday with your family to start things off. They’ll take one bite of potato and mushroom gratin and a new tradition could be born.

The point is, even with small changes, we can help to make an impact. Over time we may decide to take those changes a step further or we may not. As long as we’re moving in the right direction though, we can all do something great and eat well while we do it.