WOW! Did you Know Just One Simple Shift in Your Diet Can Help Combat Global Hunger?

Around 850 million people across the world are hungry due to lack of food availability, and things are set to get much worse. By the year 2050, the earth’s population is expected to rise to 9.6 billion people, putting additional strain on the world’s food resources. To make matters worse, the growing demand for meat, eggs, and dairy – particularly in countries like China and India – is adding pressure on our current inefficient and unsustainable global food system, causing problems in the present that will only be magnified in the future.

If we don’t change course very soon, we’re heading towards a future of potential food, energy, and water shortages. But how can we produce enough food for all these new people without degrading land, water, biodiversity and the climate on a global scale?

According to a recent study, published in Science, led by Paul West of the University of Minnesota’s Institute on the Environment, there are ways to double the availability of food, while simultaneously cutting the environmental harm caused by agriculture.

But the boldest, and most impactful recommendation of the study has absolutely nothing to do with changes that need to be made to our food system, and has everything to do with everyday food choices we make as individuals.

Where are the World’s Crop Calories Going?

The world produces about enough calories for 10-11 billion people, except that a significant portion of the calories from our staple crops are used to feed animals. Here are some approximate numbers, according to a 2013 study published in the journal Environmental Research Letters. 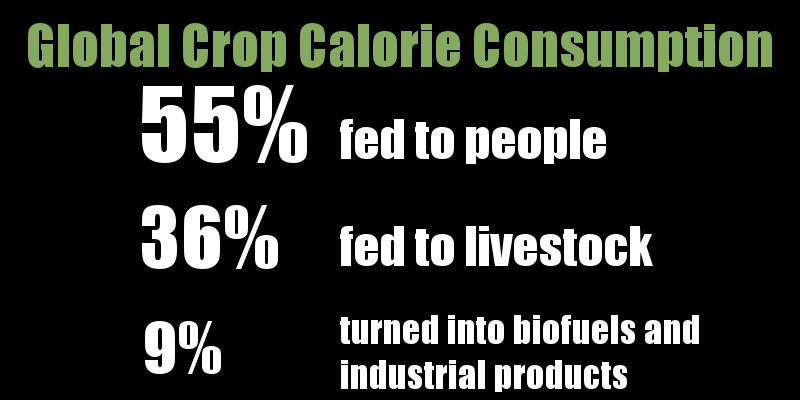 Although crops used for animal feed ultimately get converted into human food in the form of meat, eggs and dairy products, they do so with a substantial loss of caloric efficiency. The human-edible crop calories that do not end up in the food system are referred to as the “diet gap.” This concept makes it abundantly clear that producing animal products is resource intensive and inefficient. 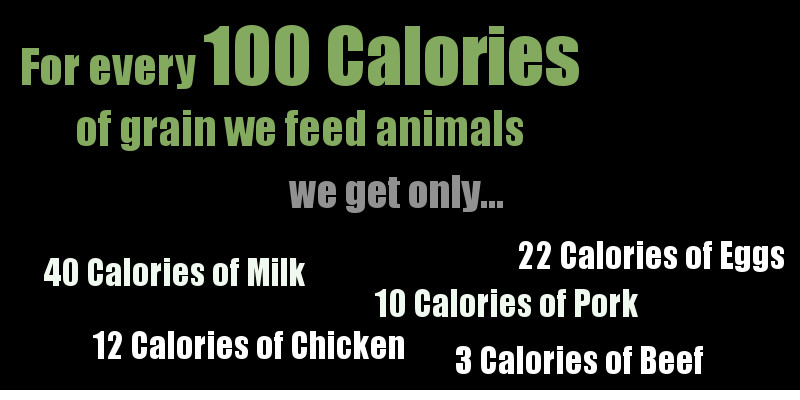 Shrink the Gap – Shift Your Diet

One Green Planet believes that our global food system dominated by industrial animal agriculture is at the heart of our environmental crisis. By just shifting our diet away from animal-based foods (meat/animal-based protein, eggs, and dairy) and incorporating more foods derived from plant-based sources, we could allow the world to grow more calories on existing cropland.

If all current crop production used for animal feed and other nonfood uses (including biofuels) were targeted for direct consumption, around 70 percent more calories would become available, potentially providing enough calories to meet the basic needs of an additional 4 billion people! While that’s easier said than done, imagine if we could shift even half of it; we could easily grow enough food sustainably to feed everyone.

Think solving the global food crisis is not reason enough to act? Keep in mind that agriculture, particularly meat and dairy products, accounts for 70 percent of global freshwater consumption, 45 percent of the total land use (.pdf) and The United Nations Food and Agriculture Organization (FAO) estimates that livestock production is responsible for 14.5 percent (.pdf) of global greenhouse gas emissions, while other organizations like the Worldwatch Institute have estimated it could be as much as 51 percent (.pdf) and slaughters approximately 150-200 billion animals worldwide. On top of that, Americans consume around 200 pounds of meat per year on average, which is three times the international average and twice the amount recommended for a healthy diet. We (especially in the Western world) could all really use a shift away from meat.

If you think about it, the choice becomes a rather simple one.