Gestation crates have become the center of much controversy in recent years. These crates are designed to house sows on factory farms in a manner that allows pork companies to continuously breed and produce in a “highly efficient” manner. These crates are so small a pig will never get the chance to turn around for their entire lives, let alone see their own tails. The sad truth is 95 percent of pork in the United States comes from pigs raised in a factory farm. It is no wonder that animal activists are fighting for a ban of these cruel crates.

According to the American Veterinary Medical Association (AVMA), “Gestation stalls were developed as a way to make efficient use of space and keep expenses low while preserving good nutrition and health of individual sows.” So if raising pigs in a gestation crate is considered to be the most efficient method of producing “healthy,” cost-effective commodities even by veterinary standards, why would or should pork industries change? Well … perhaps there’s a bit more to the story.

To get a better idea of what life is like for a pig in a gestation crate, let’s imagine for a second…

It’s dark, and the air is filled with repugnant smells and piercing echoes of screaming. But these types of conditions are all you have ever known – they’re normal. What’s that smell? It’s your own waste, piling up underneath you. Breathing is a challenge. Moment after moment passes. But you don’t know how long it’s been because there’s no way of knowing time when you’re confined behind dark, cold walls, staring at metal bars pressing up against your soft nose. What could be behind you? Who knows. Those bars are so constricting that you’ll never have the opportunity to turn around. Lying down is hard enough, but sometimes you just can’t stay on your feet because the unnatural slatted concrete floors cause your legs immense pain. You might already have arthritis and you’re only two years old.

You don’t know who you are, but you can imagine you are doomed to the same hopeless future as the hundreds of other individuals surrounding you.

The Typical Experience of a Gestation Crate Sow

Can you even imagine living one day with these conditions? This is not fiction. This is real. This is the life of an artificially inseminated soon-to-be mother pig confined in a gestation crate, where she spends the majority of her existence (besides the time she spends in a farrowing crate – Read more about it!) Sows in gestation crates are typically bred 5 to 7 times in their lives to produce piglets that will be slaughtered before 6 months of age. When a sow’s breeding production declines, her life, too, is brutally ended. And for what? Well, cheap, “convenient” pork, produced in a manner that allows industrial farms to make maximized profits.

Housing pigs in gestation crates allows farmers to mass produce these animals within an indoor environment. Many dominant farming systems (called “Megafarms”) contain over 10,000 breeding sows per unit, some with over 100,000 in one location. The pigs are kept in separate crates, so that they can’t tear each other apart from frustration due to intense confinement. However, they are still mutilated by having their tails cut off (called docking) and their ears tagged for identification. Separation also allows for workers to more conveniently manage individuals.

Pigs kept in gestation crates generally weigh between 600 and 900 pounds. So, a pregnant pig weighing a little over 800 pounds would be about 5.6 feet long and have a girth (circumference) of 5.7 feet.  Her gestation crate measures 6.6 feet long with a width of 2.2 feet. Now imagine that…take a look at life from within a gestation crate: 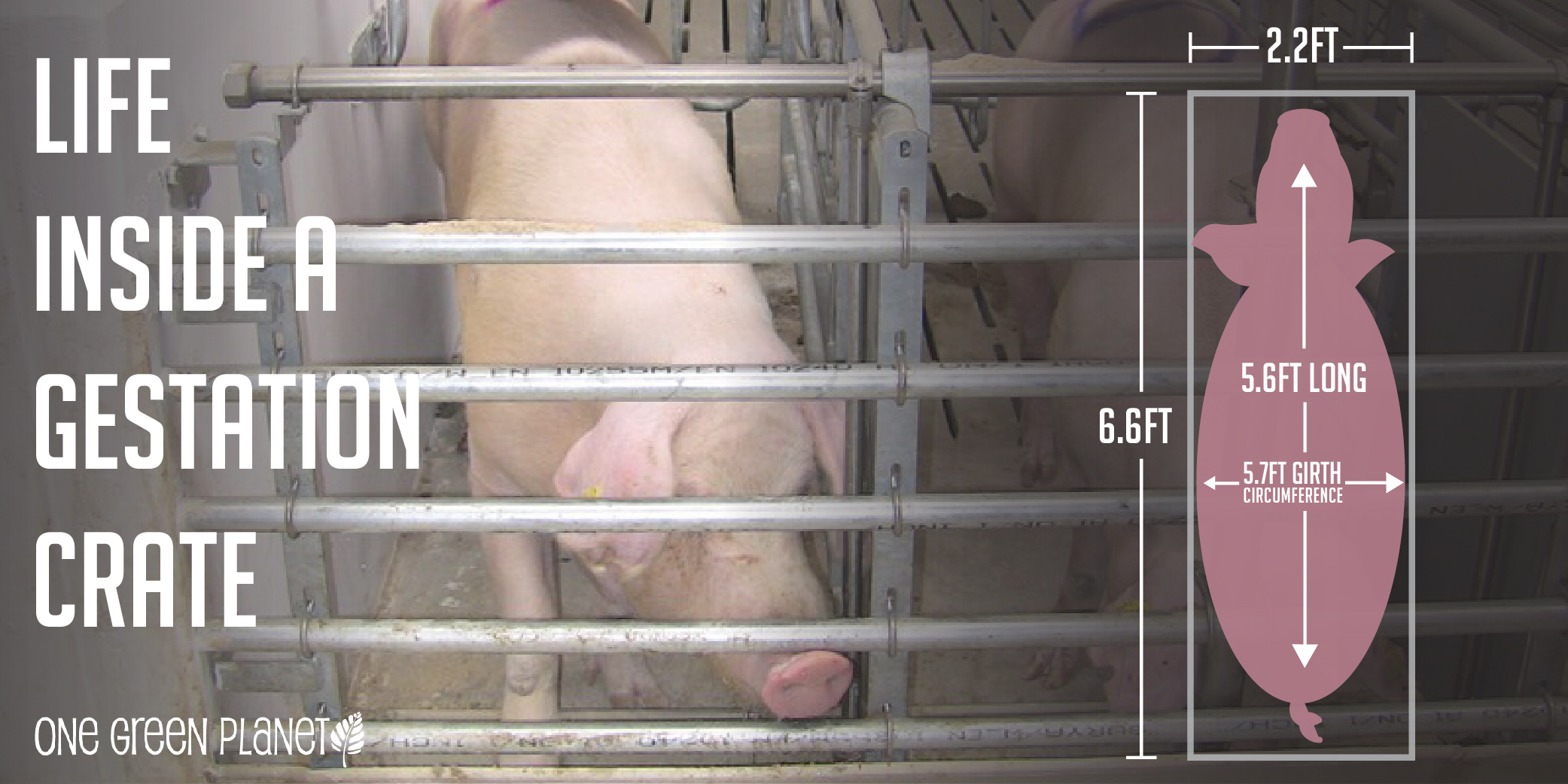 How You Can Prevent Suffering

For those interested in eating more plant-based, we highly recommend downloading the Food Monster App  – with over 15,000 delicious recipes it is the largest meatless, vegan and allergy-friendly recipe resource to help reduce your environmental footprint, save animals and get healthy!