10 Awesome Farm Animal Sanctuaries You May Never Have Heard Of 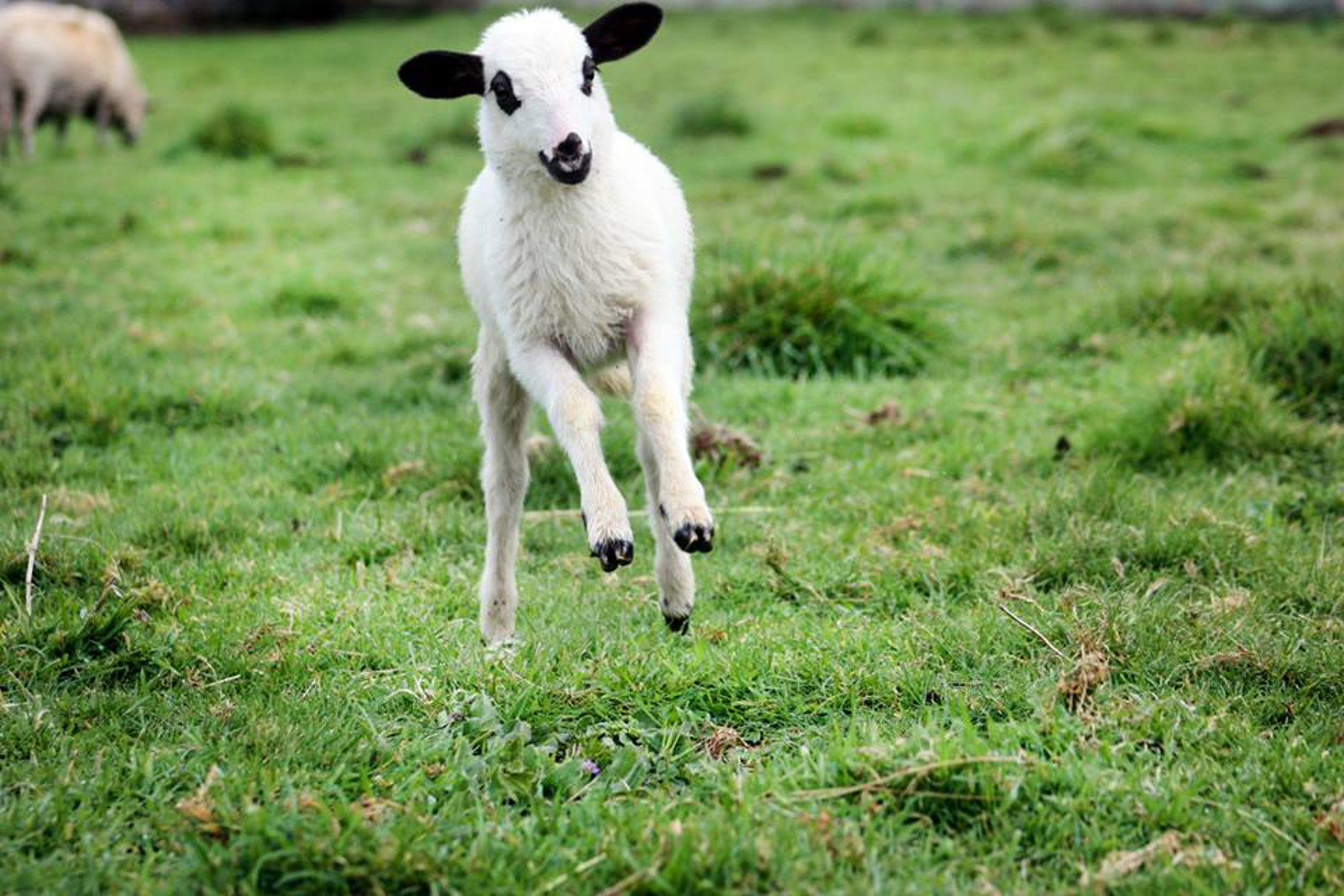 Here at One Green Planet, we’re suckers for fantastic animal sanctuaries. We’ve profiled many of them in the past who cater to a wide range of animals, from primates to stray dogs to farm animals.

There are all kinds of well-known farm animal refuges out there – such as Farm Sanctuary or Chimps, Inc. – that do amazing work on behalf of the animals in their care. But how about the unsung heroes? The places that don’t necessarily receive as much attention or publicity, but still deserve to be praised for what they do? Below, we profile a few of these relatively unknown gems:

Let’s start off with the sanctuary that inspired one of OGP’s most popular news stories of 2014 – that of ex-breeding cow Granny and her adorable new calf, Valentine! Signal Hill Sanctuary is a new farm animal sanctuary located in Yass River, New South Wales, Australia. Signal Hill’s first resident was a “wee Boer goat named Bok,” at a time when the sanctuary “didn’t have a name and its purpose wasn’t consciously considered.” Since then, the farm has expanded into a two-hundred acre site that caters to a variety of animals, including cows, goats, sheep, and chickens.

They are currently running a crowdfunding campaign to help finance the purchase of equipment and medical treatment for their residents. It ends on Apr. 9, 2014 and you can donate here. You’ll also be glad to hear that Granny and Valentine are thriving!

The Lighthouse Farm Sanctuary in Oregon’s Willamette Valley was founded in 2002. In addition to caring for their resident llamas, cows, burros, pigs, sheep, goats, geese, ducks, and chickens, the sanctuary also advocates for public policy change and educates people in the local community about farm animal welfare. They also run a series of awareness and fundraising events each year, such as Gentle Thanksgiving, the Annual Children’s Farm Camp, and the Annual Easter Event, which takes place on Apr. 20 this year. You can help them by volunteering, donating to their crowdfunding campaign (which ends on Apr. 7, 2014), or attending an event.

SASHA Farm (SASHA stands for “Sanctuary and Safe Haven for Animals”) is located in Manchester, Michigan. It is described on its Facebook page as “the midwest’s largest farm animal sanctuary.” Their newest resident, an adorable black and white calf named Fargo, began his new life in the sanctuary on Mar. 23, after escaping from a truck that was bound for the slaughterhouse and wandering through the nearby town of Casselton. Just like these animals who decided they were through with captivity, it looks like Fargo, too, decided he wanted to be more than just a steak! He and his fellow SASHA residents are well cared-for by the staff and volunteers, receiving all the love, compassion, and nourishment they require to heal from their traumatic pasts.

You can help SASHA Farm by donating, volunteering, sponsoring an animal, or attending an upcoming event.

This sanctuary, located in Galicia in the north of Spain, describes their mission simply as “Rescue. Rehabilitate. Educate.” Their ultimate aim is to “create a loving and nurturing environment for farm animals to live out their lives in freedom, free from pain, suffering, and the burden of expectation. We make a difference by showing them love and compassion, something that so many animals never get the opportunity to experience … We believe that veganism is a liberating concept and we want to empower people to open their hearts and experience this beautiful and abundant lifestyle for themselves.”

Some of the sanctuary’s residents include a goat family, collectively known as “Bruce and Co.,” a cluster of adorable piglets called “The Seven Dwarfs,” and a venerable old boar named “Gandalf.” You can help these animals by donating, becoming a sponsor, or applying to work as a volunteer.

This sanctuary, located in Worcestershire, England, is under the patronage of actress Joanna Lumley. It is currently running an urgent appeal for help. The owners of the farm have decided to sell the land, and the sanctuary must raise £675,000 by July in order to purchase it and ensure that their facility remains safe.

Let’s hope they survive, Green Monsters, because the services they provide to the animals in their care could hardly be more vital. Some of their residents are: Coral, a formerly abused horse who was “passed around a lot of markets and a lot of horse dealers;” a blind sheep named Stargazer; and Angus, a fifteen-year-old bull who has had the great fortune of being born at the Sanctuary, and has spent his whole life there, including “nine very happy years” with his mother.

North Mountain Animal Sanctuary, in Nova Scotia, Canada, provides “comfort, protection, and rehabilitation” to a wide range of abused and neglected farm animals such as goats, sheep, chickens, rabbits, and ducks, as well as the “occasional calf or mini-horse.” Some of the animals in their care include a sweet dwarf rabbit named Blossom, two tight-knit bantam hens called Jo and Beth, and Wiggly, a piglet who was first rescued after being discovered wandering through someone’s garden!

You can show your support for this sanctuary by sponsoring a rescued rabbit for Easter or making an ordinary donation that will help North Mountain to purchase feed, medical equipment, and bedding.

Hungry Horse Outside is an equine rescue center in County Longford, Ireland, that occasionally takes in other neglected farm animals, as well as dogs and cats. The organization’s small team of volunteers works to rehome as many horses as possible, in addition to running various awareness and education programs. Breeze, one of the most recent beneficiaries of their care, says, “My last owner thought it was acceptable to keep me locked in ashes, with no food, no water, and no light … When I arrived at the place I later learned was called Hungry Horse Outside, I was excited! I was allowed all the water I wanted, I was given hay, I finally had a bed of my own all fluffed up with straw – I wonder if I should lie on it or eat it?”

In December, Hungry Horse Outside suffered the loss of ten acres of rented land: a “devastating” loss that stretched their facilities, “leaving it even more difficult to take in new rescues.” You can help them by donating here.

The Italian Horse Protection Association (IHPA) in Tuscany is the first dedicated equine rescue sanctuary of its kind in Italy. Their main goal is to aid the psychological and physical well-being of the injured, maltreated, or neglected horses they shelter, saying that in our modern-day, consumerist culture, equines “make us better persons with their gentleness, their depth, and their pride.”

IHPA also runs a series of horse-related petitions and advocacy campaigns. You can help them continue their work by donating, symbolically adopting a horse, or browsing their online shop.

PIGS, in West Virginia, specializes in caring for … well, pigs. This sanctuary was founded in 1992, and currently cares for around 400 animals, including potbellied pigs, farm pigs, horses, cats, dogs, and goats. The sanctuary team holds a series of fun events each year to raise money for the upkeep of PIGS’ residents. They also educate members of the public on the complicated and highly specialized care required by potbellied pigs, in an effort to quell the interest in keeping them as pets.

You can help PIGS by donating, visiting their online shop, or booking a sanctuary tour.

Brook Farm Animal Sanctuary, located in Northants, England, is a vegan run charity with a strict no-kill policy “except on veterinary advice and where all else has failed. In some instances, where the animals have special needs, are very old, or have personality disorders, we guarantee them care and protection, as well as a home with us, for the remainder of their lives. Animals we deal with include the following but are not limited to: dogs, cats, rabbits, horses, ponies, goats, sheep, pigs, cows, chickens, guinea pigs, and hedgehogs.”

You can support Brook Farm by donating, sponsoring an animal, or checking out their online shop.