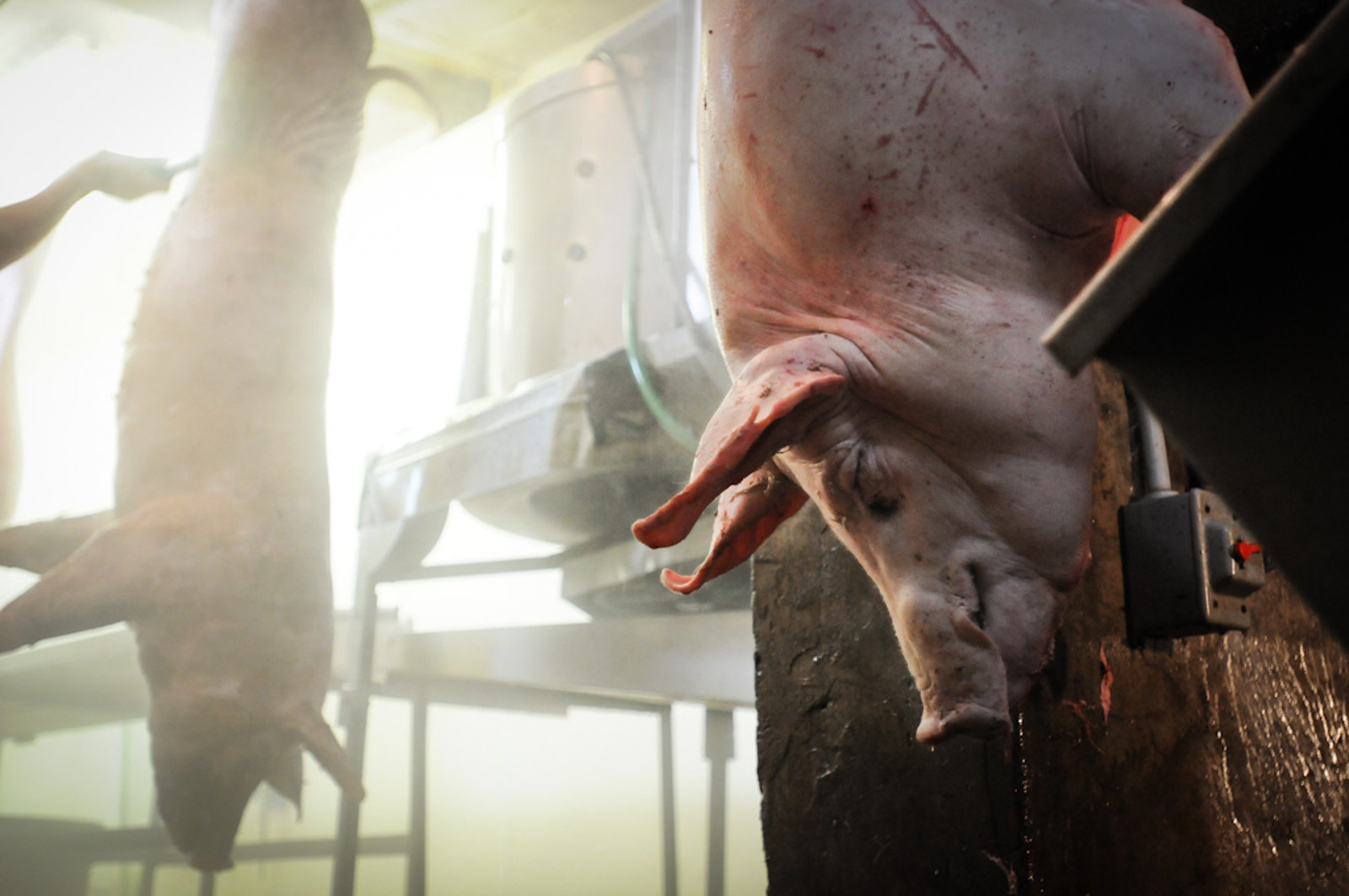 Mainstream society has deemed it ethically acceptable to consume animals, yet people are increasingly less tolerant of seeing the origins of their own food. While (nearly) everybody is aware that beef comes from cows, pork from pigs, and chicken from ……chickens, there is a widening gap between what we see presented in supermarkets and restaurants, and the gory details taking place behind the scenes.

Now more than ever, people have become accustomed to seeing their meat only when it has been pristinely packaged in cellophane, while completely ignoring who it is they are actually eating and what kind of hell they were living in before ending up in their shopping cart.

As we evolve as a society, the sight of a half butchered pig, or a string of dead birds fully feathered hanging in the shop window is leaving us increasingly unsettled and it’s about time to start asking ourselves why.

Outrage at meat being hung in a butcher’s shop

A recent incident in the U.K. has highlighted the issue perfectly, showing just how far removed we have become from the truth of where our food comes from. A butchers shop has been forced to stop displaying dead animals in their shop window after public outcry from local residents. One resident told reporters that the window display “looks more like a scene from a horror movie.” This is something you might expect to hear from an impassioned group of animal activists, but not from those who consume animal products themselves on a daily basis. So what’s really going on here, surely meat eaters shouldn’t have a problem seeing a dead animal carcass?

The psychology of meat consumption

Meat processing plants suit our desire to disconnect from the source of our meat as they present us with a packaged product which in no way resembles its original animal host. Researchers conducted tests to investigate the mental process of thinking about the source of their food, and how differing amounts of knowledge and thought on the subject would influence their desire to consume meat and their consequent mood while doing so. The section of participants who were told that they would be eating an apple attributed more mental qualities to a cow than those who were told they would be sampling beef products. Those who thought they were going to be consuming beef denied the cows many of the attributes given by the other test group as this enabled them to reduce the amount of moral concern over the issue. In effect, the study highlighted what we are seeing in real life — that people who can disconnect from the imagery of the actual animal who was killed for their meat are able to worry less about the ethical issues related with its death. Out of sight, out of mind.

Another well known medical study investigated the brain functions of patients while they were shown various images of suffering and abuse. The vegetarians and vegans who were tested showed more brain activity than meat eaters when witnessing negative scenes, with the vegans showing the highest level of brain function connected to empathy.

Around the world different animals are deemed socially acceptable forms of food. In the Western world, eating dogs is seen as horrific and cruel, but eating cows is perfectly accepted, while in other areas, cows are revered as holy animals and kept off the menu. The recent U.K. horse meat scandal has once again highlighted the moral issues we face when deciding to choose which animals to love and which to eat. It was acceptable to eat a beef burger, but when people thought it might in fact be a horse that was hiding in-between their burger bap they were outraged.

Becoming too emotionally attached to the animals we eat doesn’t sit well with our conscience, which is why as a society we push back against anything which reminds us of the stark reality behind our food choices. It’s okay to buy pork loins from the store as long as they do not resemble the animal they came from, yet they wouldn’t be so eager to open their wallet had they witnessed the murder and butchering of the pig themselves. The more media attention that food animals receive, they harder people try to detach themselves from who is on their plate, but you can’t ignore the truth forever.