The Do’s and Don’ts: Your Handy Guide To Animal Entertainment 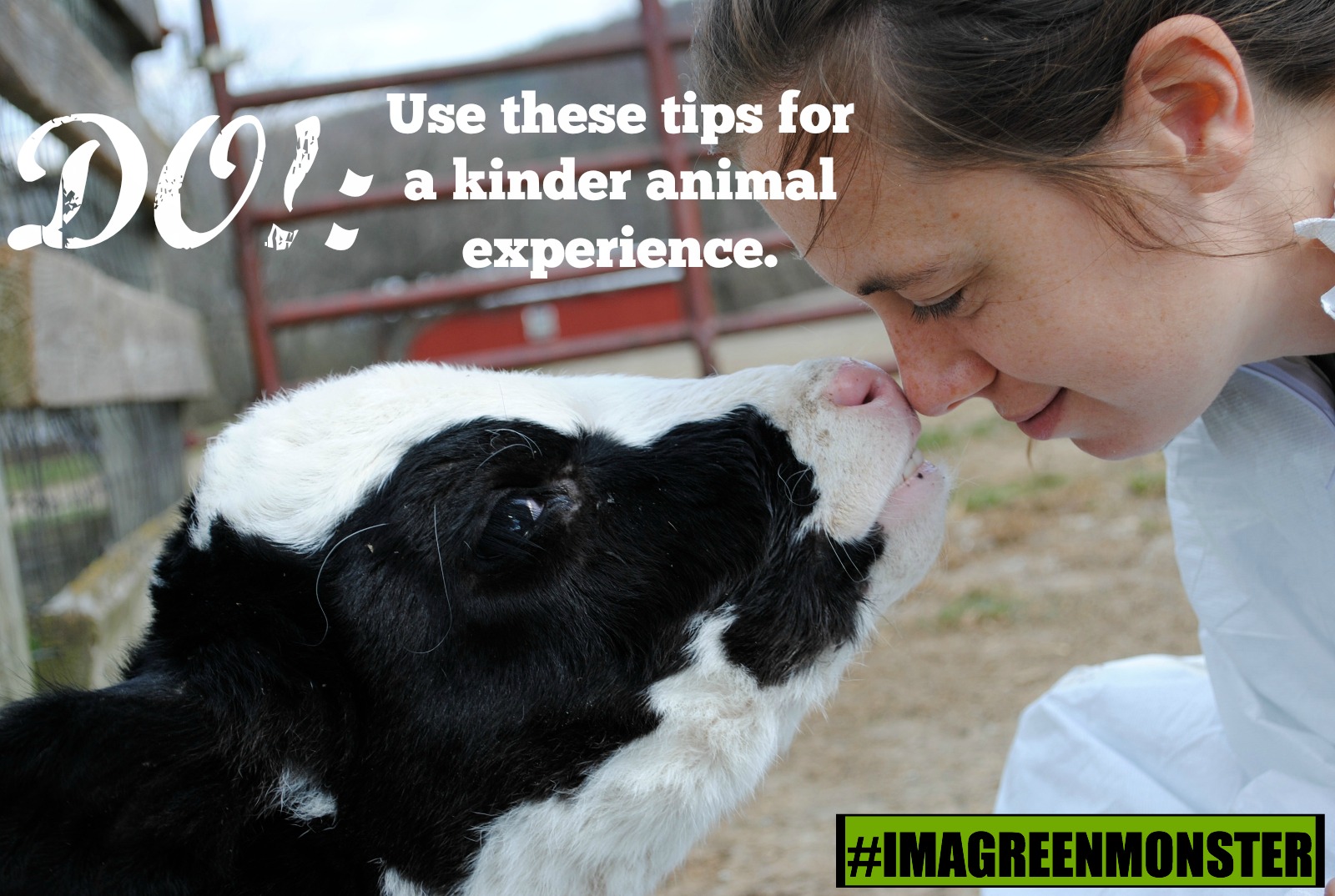 There’s a lot of confusion out there about which kinds of animal attractions are cruel and which aren’t. With all of the conflicting information being pumped out, the confusion is understandable. Seriously, what are we supposed to believe? We’ve grown up thinking that zoos are actually good for animals, but now we’re hearing they aren’t? SeaWorld is actually bad?

These types of places want people to feel as though they’re doing a good thing for animals, that their conservation programs make supporting them a good thing to do. While some places do have conservation programs in place, their treatment of the animals they have in residence is more often than not a total travesty. The bottom line is, animals should never be thought of as props for entertainment. If an animal is being used as a display, being forced to do tricks or being kept in captivity for the purpose of making a buck, that animal is being exploited.

So what do we do if we want to commune with our furry friends? How do we differentiate between an organization that has an animal’s best interests at heart, and one that views them as a commodity?

Don’t worry Green Monsters, we’ve got you covered! We’ll explain the reasons why some places are hot and some are so not, while providing links for learning more about specific organizations that you can support and places you can patronize in order to help animals while hanging out with them. So, don’t sweat telling the kids that the family is skipping the zoo, not when cruelty-free alternatives abound!

Zoos: Not educational and not humane.

Many of us have fond memories of going to the zoo as kids, seeing the animals up close and enjoying a day with our family or class. Billed as an educational activity, going to the zoo seems like a logical thing to do when you love animals and want to support them. Unfortunately, the animals in the vast majority of zoos worldwide are kept in small and inadequate enclosures, offered limited to no mental stimulation and are in no way intended for reintroduction to the wild. Ever. Animals are used as exhibits, nothing more.

Visiting a sanctuary is a far better choice if you’d like to see animals that are being cared for properly and are there for appropriate reasons. Sanctuaries work to rehabilitate animals for reintroduction to the wild, or give them the best possible life if that isn’t possible due to the trauma they suffered before they arrived. When selecting a sanctuary to visit (or volunteer with if you want a truly special experience), make sure you check up on the place. You want to be sure that the place you’re visiting isn’t merely a zoo under a prettier sounding name. To find a legitimate sanctuary near you, check with The American Sanctuary Association (ASA) or the Global Federation of Animal Sanctuaries (GFAS). 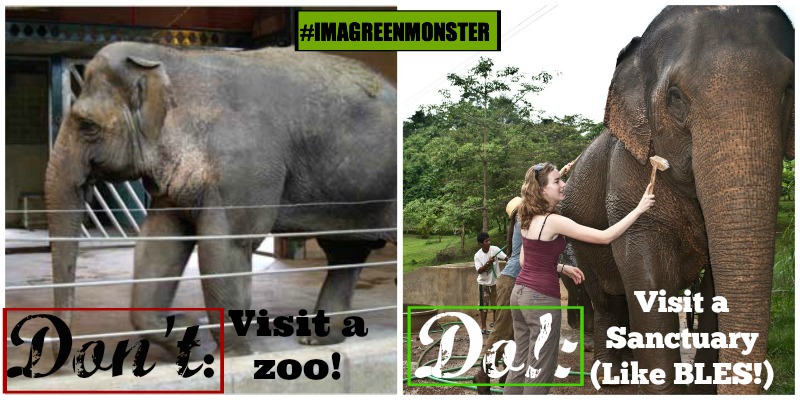 Like zoos, many marine parks participate in conservation projects, which makes it very difficult to understand why we shouldn’t patronize any of them. None. By keeping animals in tiny enclosures, forcing them to perform day in and day out for screaming crowds, blasting loud music around incredibly noise-sensitive animals and limiting their exposure to social contact with species of their own kind, marine parks employ the idea that the needs of the many outweigh the needs of the few.

It just doesn’t have to be that way. There are plenty of organizations that do wonderful things for marine conservation without forcing dolphins to act like skis for trainer rides during a show. There are also ways that we can experience marine life without going to an aquarium or marine park to do it. Try a wild whale watching adventure! Seeing whales in their natural habitats through reputable tours like Dana Wharf Whale Watching in California can allow you see whales (and sometimes dolphins too)  in a far better way than swimming circles in a veritable fish bowl. 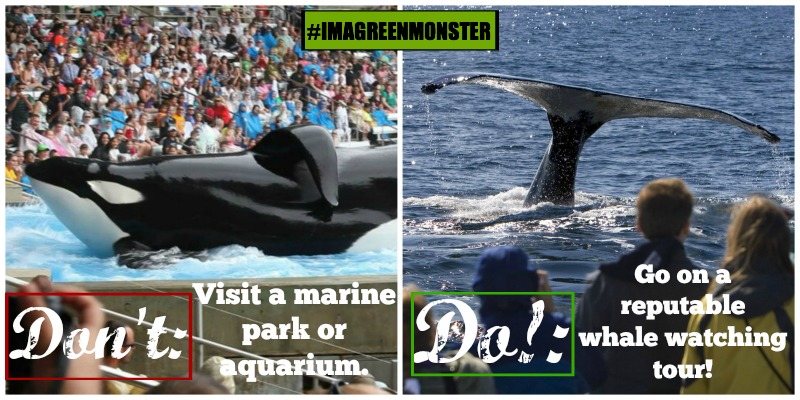 Safari parks take the confusion game a step further by making patrons believe that the animals are in a habitat that mirrors their natural one. By calling themselves a ‘safari park,’ they hope to distance themselves from being thought of as a zoo. The reality though, is that’s exactly what many of these places are.

Safari parks keep animals in enclosures of various sizes. Some of these parks offer more luxurious digs than others, but they still keep their animals in captivity with no intention of releasing them into the wild. They also allow cars to drive through, either by staff or by patrons themselves, in order to experience the animals. This isn’t safe for anyone involved, animal or human! Because the animals are not released into the wild, safari parks also face overpopulation problems when the animals do what comes naturally. The end result can be shipping the animals to other zoos or, in several cases, killing them off.

An actual safari is a genuine alternative if you want to see animals in their truly natural environments. As with everything, it’s incredibly important to thoroughly vet the company providing the excursion to ensure that all safety precautions are being taken for humans and animals alike. If the place is offering the chance to see the jungle while riding an elephant, run! You’ll want to choose one that not only plans on minimal disruption to the animals and their habitats, but also a company that helps to contribute back to the local economy and conservation efforts. National Geographic has a list of recommended companies to get you started. 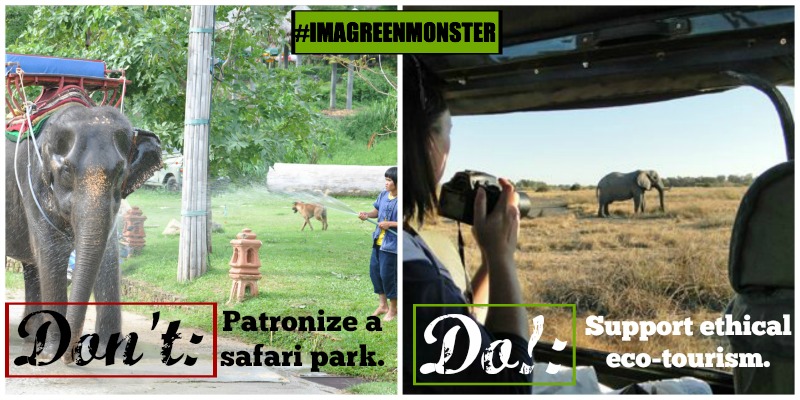 Circuses: The most inhumane ticket in town.

Far more people have circuses and their cruelty on their radar than they previously did, but there are still people that don’t realize that the animals performing for the crowd aren’t doing it because they like it. They’re doing it because they’ve suffered years of abuse in order to force them into compliance. The circus wants us to think that standing on their heads, jumping through fire and riding bikes are natural behaviors. They are not.

If you still want to see chills and thrills with some cotton candy and all the oohs and ahhs, don’t despair! There are plenty of circus options that don’t use animals at all! Born Free has a huge list of animal free circuses to check out for a cruelty-free night out with the family. 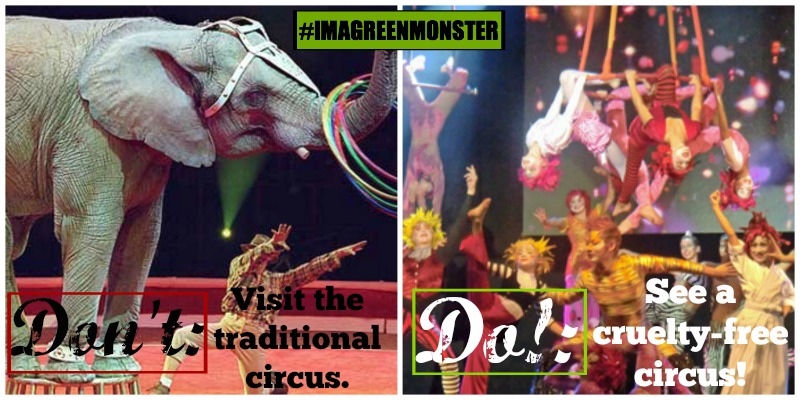 We love animals. Many people do. That’s why it’s difficult to resist when the opportunity presents itself to commune with one. Seriously, we get it, the allure of swimming with a dolphin, riding an elephant or bottle-feeding a tiger cub sounds like a pretty magical memory to make.

The trouble is, the animals involved in these encounters are being forced into that situation and are often being put in danger because of it. Elephants are “broken” in much the same way that they would be for circuses in order to make them docile enough for human interaction, while dolphins are exposed to disease and injury as a result of their close contact with the public. Baby tiger cubs are removed from their mothers in order to be handled by strangers, as are any other baby animals used for photo ops.

Volunteering with a sanctuary, going on a snorkeling excursion or even going bird watching can help to provide a more up close and personal experience while keeping the focus on minimally disrupting the animals involved. We know we sound like a broken record, but be sure to always go through a reputable organization for snorkeling or bird watching tours. Proper safety precautions must be priority one for humans and animals alike. Remember-no matter how tempting it is- if the opportunity presents itself to touch animals in the wild, don’t do it. It isn’t safe for you or for them. 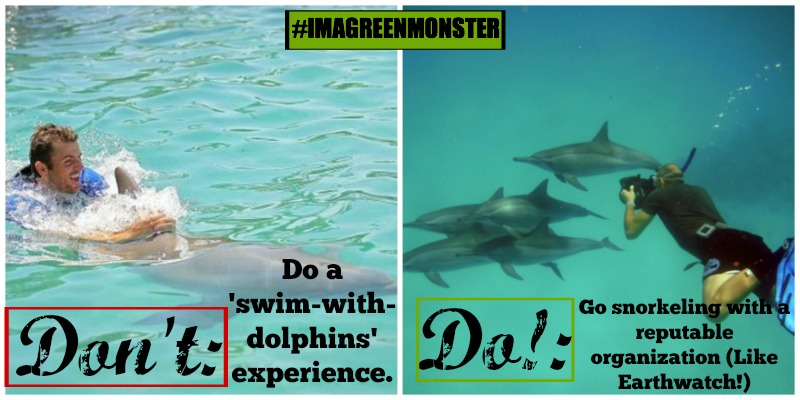 Eliminating the confusion about what’s good for animals and what isn’t allows us to experience them without harming them in the process. By keeping the welfare of animals at the forefront when deciding how best to spend time with them, everyone can experience the wonder of nature while helping to preserve it.