By The Traveling Bastards 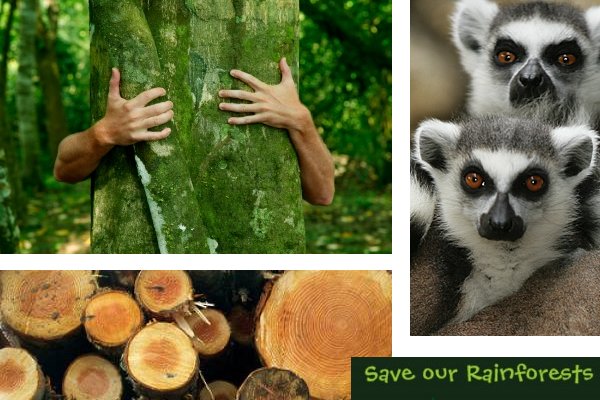 The importance of the world’s rainforests cannot be overstated. They act not only as global and regional climate regulators and carbon-dioxide sinks, but are also major sources of food, materials and medicines for both local and global populations and the home to 50-90% of the world’s plant and animal species. Simply put, the earth would not survive without them, yet their destruction continues on a massive scale. Every hour, 500,000 rain forest trees are felled, leading to extensive deforestation and annual extinction rate of 20,000 to 100,000 species of animals that make the rainforest their home. Luckily, there are many ways in which you can directly help minimize the impact of this devastation, by volunteering your time in rainforests around the world.

Although rainforests are usually thought of as steamy, tropical jungles, they can also be temperate, like those of Europe, Japan and North America. The Great Bear Rainforest in British Columbia, Canada is the base for volunteer projects sponsored by the Canadian Alliance for Development Initiatives and Projects (CADIP). On the Great Bear Rainforest Volunteer Project, volunteers interact with First Nations (Native Canadian) children and teenagers to restore the forest environment, work on community infrastructure repair and maintenance, support the youth culture and science camps, teach natural healing classes and promote eco-tourism.

The Amazon Basin, the largest rainforest on earth at 1.7 billion acres, covers 40% of South America and is roughly the size of the 48 contiguous U.S. states; it extends across the countries of Brazil, Bolivia, Peru, Ecuador, Colombia, Venezuela, Guyana, Suriname and French Guiana. For those who prefer a longer term volunteer opportunity of 5-10 weeks, Go Abroad.com, a website that promotes educational and experiential travel opportunities, offers a chance to work on a wildlife conservation expedition in a remote Ecuadorian community, interacting with locals, identifying and tracking butterflies, mammals, reptiles, amphibians and birds on a full-time biological field station deep in the Amazon.

4. Save Great Apes in the Congo

Bonobos, a great ape that exists only in the Democratic Republic of Congo, is under constant threat due to poaching and the destruction of its natural habitat through logging. Bonobos live in the Congo Basin, the second largest rainforest on earth after the Amazon, and of equal importance to the planet’s health. The Bonobo Conservation Initiative (BCI) is an organization dedicated both to saving the bonobo and its habitat from destruction through education, funding and converting lands allocated to the logging industry back to protected status. BCI volunteers work to build alliances and support within local communities and to assist with writing and editing, translations and GPS mapping.

5. Help Solve the Mystery of Disappearing Frogs in the Eastern Australian Rainforest

Along Australia’s east coast, frogs have been disappearing at an alarming rate and scientists are baffled as to why. In the last 20 years, 5% of all frog species have disappeared completely, 20 species have declined steeply and another 27 species are considered threatened. Their sudden decrease in numbers is especially puzzling because the areas in which they live are considered relatively untainted by pollution, exotic predators, human interaction or habitat destruction. Earthwatch Institute’s Australia’s Vanishing Frogs Program enlists volunteers to gather information on the activities of the frogs and the distribution of a fungus which is a suspect in the frog’s destruction.

6. Study the Impact of Logging in Borneo

In Malaysian Borneo, on the Kinabatangan River, Global Vision International (GVI) volunteers live among some of the most interesting and varied wildlife on the planet: gibbons, orangutans, monkeys, river otters, pygmy elephants and crocodiles are just a few of the species that make the rainforest their home. The work to restore the habitat destroyed by logging is physically demanding, but rewarding, involving wetland restoration, reforestation, creating forest trails or helping with maintenance of eco-camps. If you prefer something less physical, GVI also needs volunteers with English teaching and IT skills to help broaden the knowledge of the local communities and staff.

7. Measure Trees in the Western Ghats of India

Climate change is a particular concern for India’s South Western Ghat region, an area whose population is largely dependent on the rainforest for food, shelter and livelihood. Although the area covers almost 9,000 square miles, over 2/3 of the forests have already been cleared and only 15% of the remaining area is protected. India’s local scientific research groups work alongside Earthwatch India Regional Climate Centre to sponsor a volunteer program that assists with helping locals to develop sustainable economies and to educate both locals and tourists about the fragility of the ecosystem. The team also conducts field research by measuring the growth rate of trees and gathering other information vital to understanding the progression of the effects of climate change on the destruction of the forests.

Human activity in the rainforests of coastal Madagascar has resulted in one of the most devastating effects on the planet. Since the 7th century, when Bantus arrived to establish trading posts, the forests have been subject to destruction, accelerating rapidly in the 17th century when French and British colonists combated fiercely for Madagascar’s scarce resources. To date, 90% of the coastal forest has been cut down and of the remaining 10%, only 1.5% is protected. Wild lemurs are only found in the forests of Madagascar and are threatened by the disappearance of their only habitat on earth. The Azafady Conservation Programme’s Lemur and Biodiversity Research Module works to investigate the effects of the destruction on the local populations of lemurs and reptiles. Volunteers track the animals, identifying them and recording and analyzing behavior for further scientific research.

Although the government of Brazil has put a stop to the harvesting of mahogany (the wood of the darkwood tree locally known as Mongo), the peripheral damage to the rainforests of Brazil is still strongly evident. Because the trees are so rare (perhaps only 1-2 exist per acre of rainforest), loggers searched hundreds of kilometers just to find a few valuable trees. In the process, they bulldozed the forest to create roads between the trees and the sawmills, often hundreds of kilometers in length. Volunteer groups working in conjunction with the Brazilian government and local conservation groups are replanting the forests, but are falling far short of their goal. Volunteer Brazil has only reached 5% of its goal of reforesting 50,000 acres and is in desperate need of volunteer help in restoring and replanting.

Washington State’s Olympic National Park, one of the most beautiful temperate rainforests in North America, has been designated an International Biosphere Reserve and a UNESCO World Heritage Site. The Hoh Rain Forest and Quinault Rain Forest receive about 150 inches of rain a year, making them the wettest spots in the continental United States. Although the area is one of the best protected rainforest regions in the world, the trails are in constant need of repair and maintenance due to inclement weather, rock falls, fires and the wear and tear of the numerous hikers that visit the area every year. The Washington Trails Association hosts “work parties” that combine rebuilding trails and bridges with hiking and camping trips through some of the most breathtaking scenery on earth.