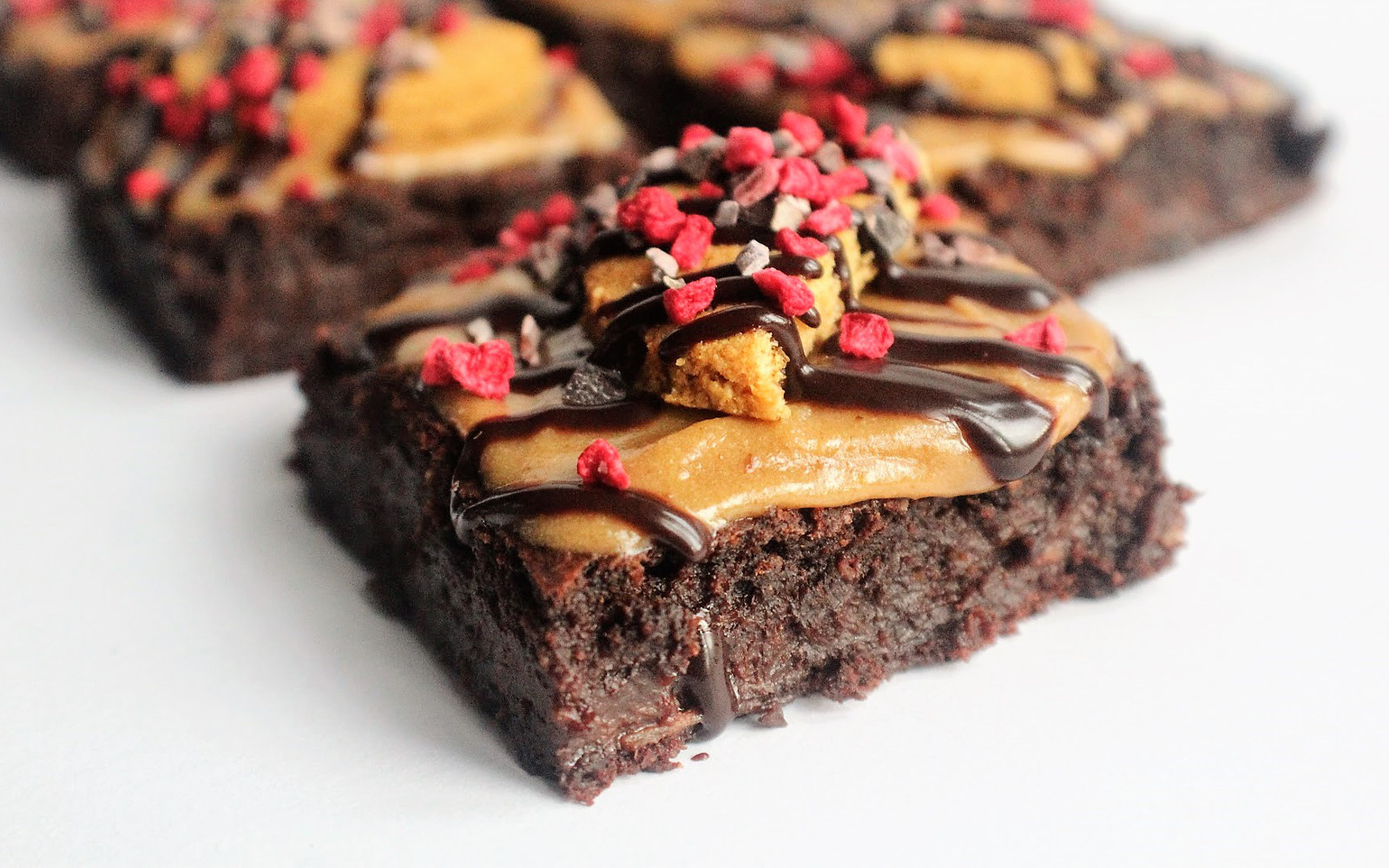 Brownies are a classic dessert! Even people who claim not to have a sweet tooth can’t refuse good vegan brownies. Whether you like fudgy brownies or cakey brownies, we got you covered with these 15 delicious vegan brownies from the Food Monster App! Give them a shot the next time you’re craving a yummy dessert or take them with you to your next potluck, and watch everyone finish them off in minutes. 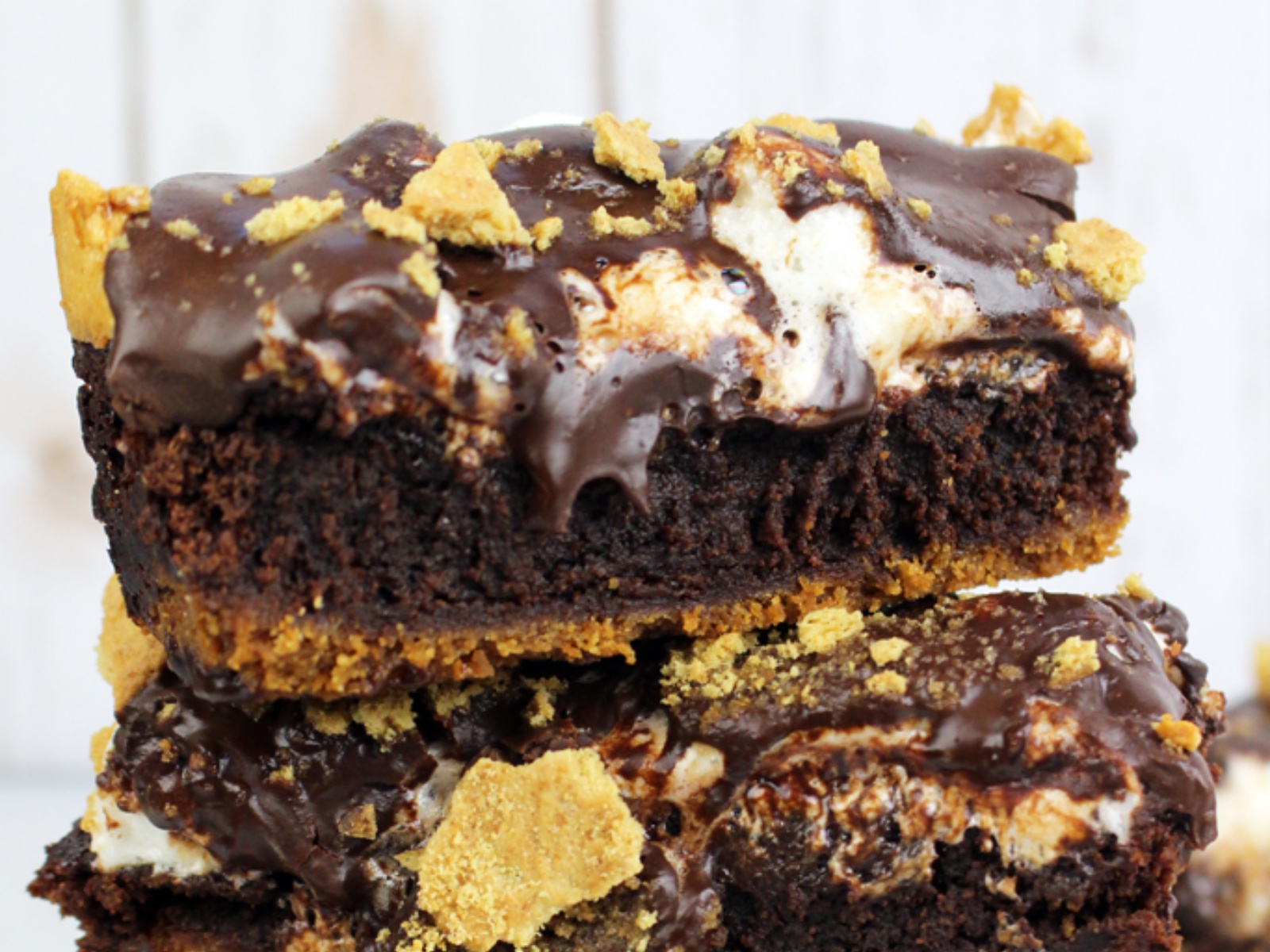 These S’mores Fudge Brownie Bars by Gretchen Price are unreal and VEGAN! 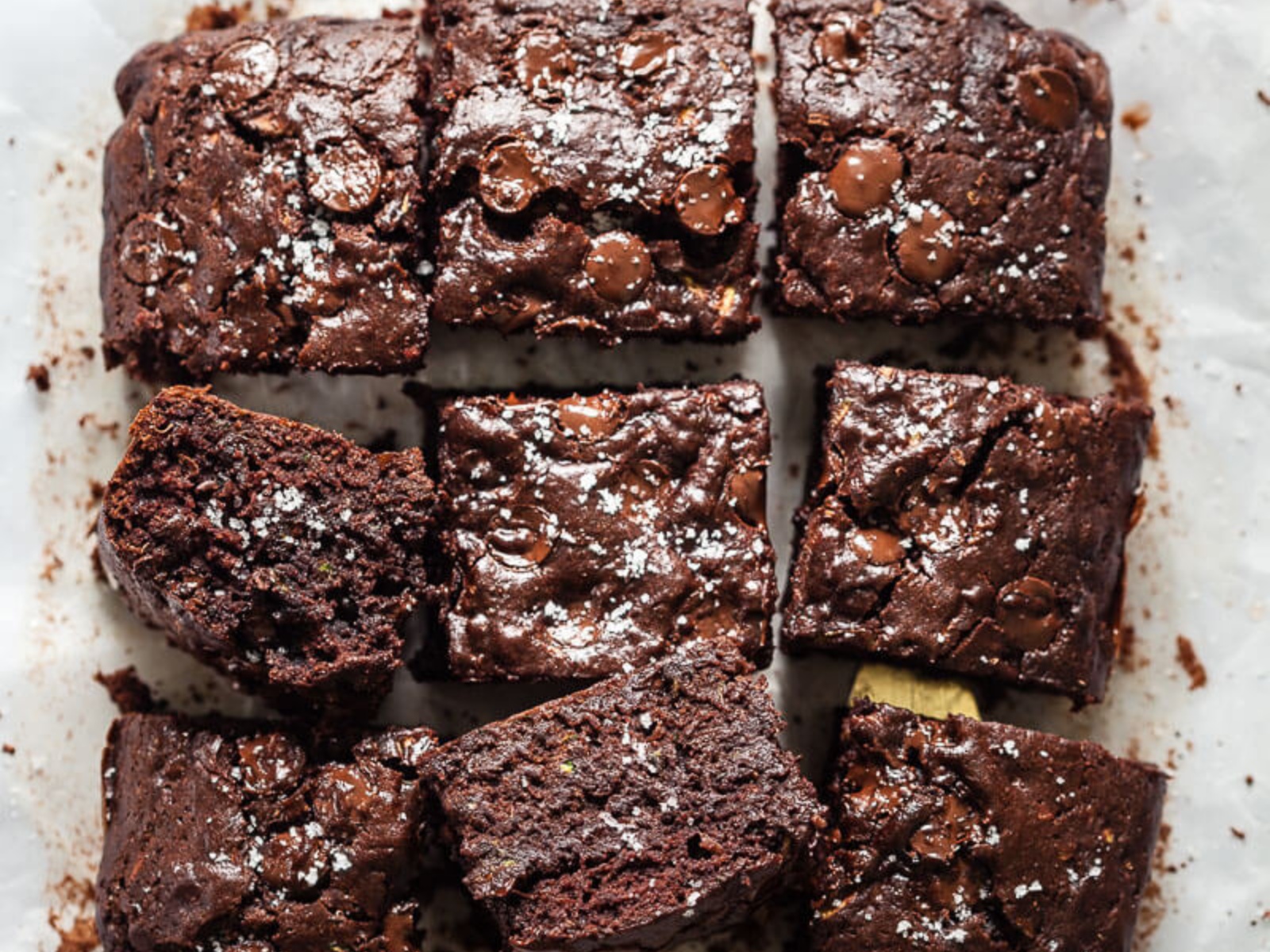 These Vegan Chocolate Zucchini Brownies by Kristina Jug & Mitja Bezenšek are as delicious as they are easy to make! And they’re rich, decadent, vegan, and dairy-free.

These decadent and fudgy Caramel Topped Gingersnap Brownies by Pamela Higgins bring dessert to the next level. The vegan brownies are made from a combination of oat flour and almond flour, raw cacao, and are relatively low in oil. They’re topped with a layer of crumbled gluten-free gingersnap cookies, followed by a layer of tahini caramel. When it comes to the topping, you can stick with melted chocolate and freeze-dried raspberries or experiment with your own creative creation. 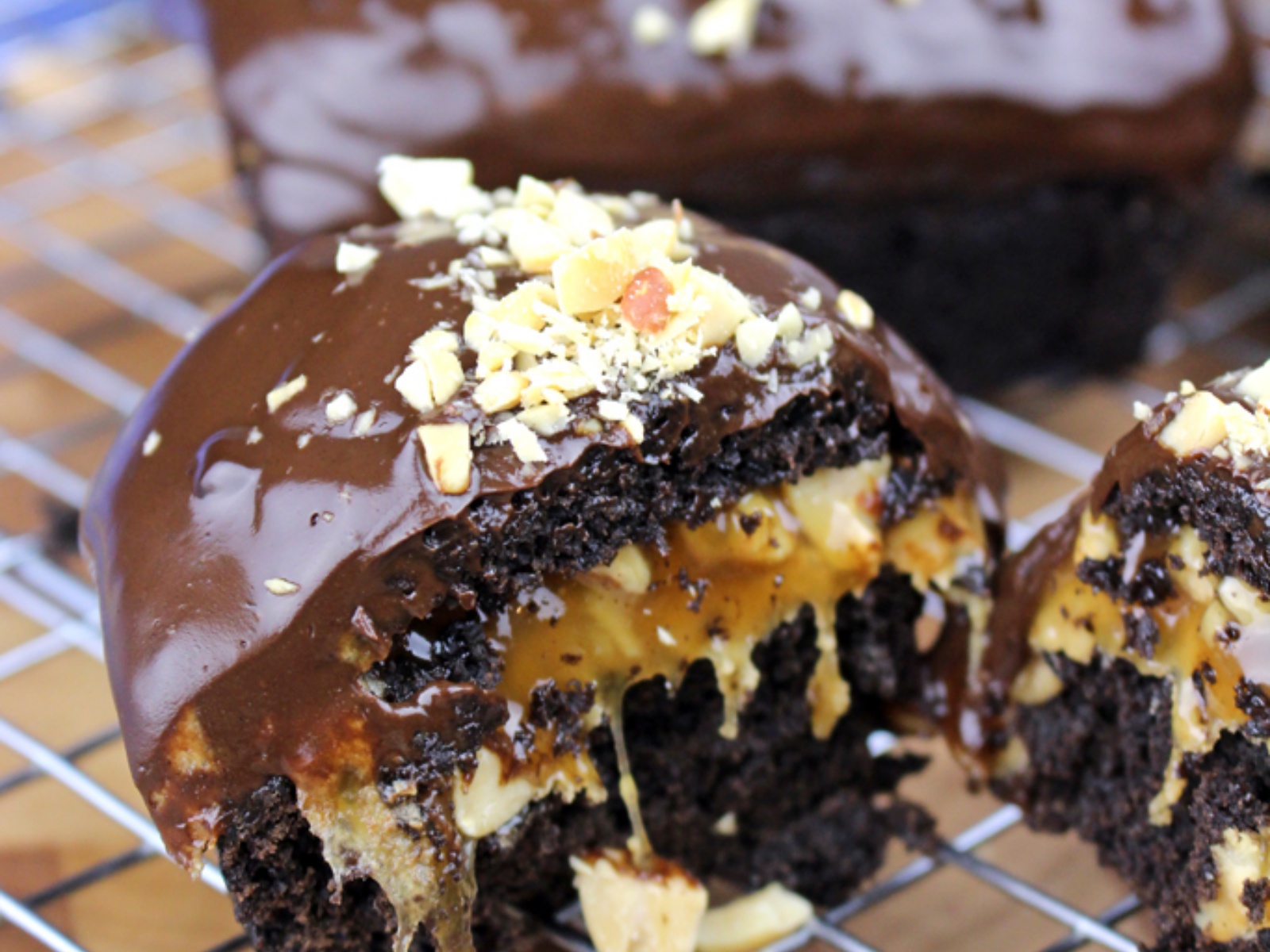 These Snickers Brownies by Gretchen Price are the fudgiest vegan brownies you will ever eat all wrapped up in caramel, peanut butter nougat and chocolate ganache for the worlds most sinful (but worth it) dessert ever! 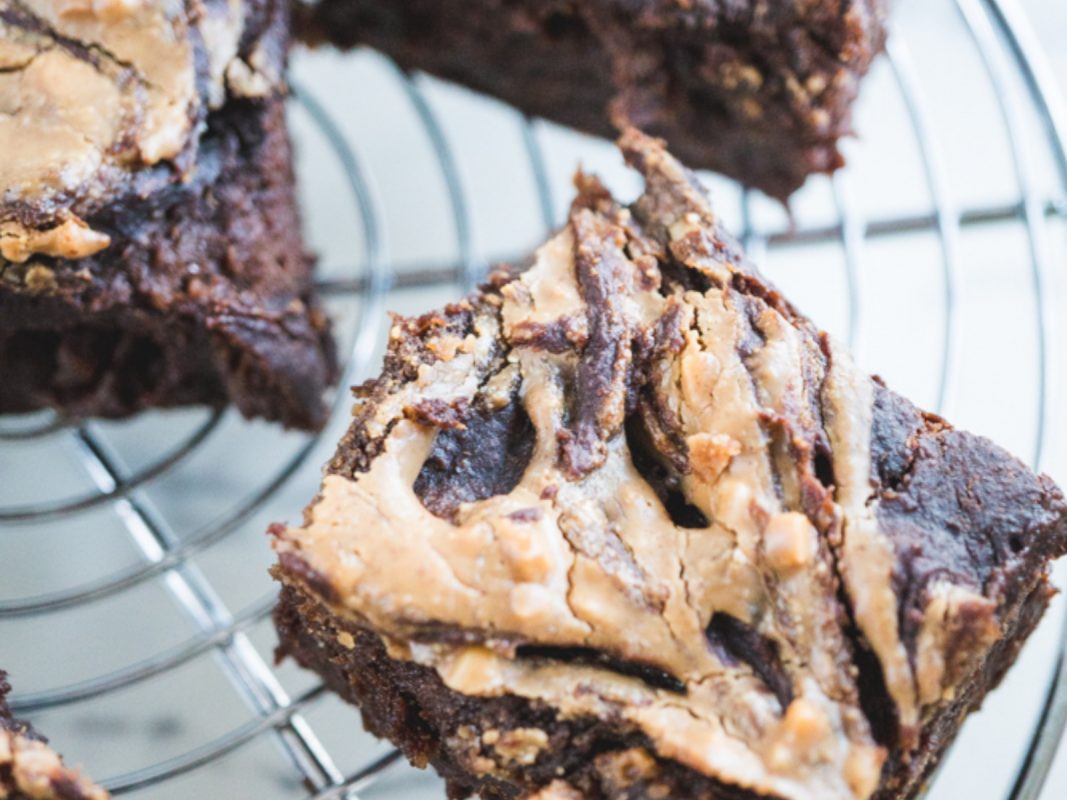 Apart from being a total deliciousness, these Sweet Potato Brownies by Laine Rudolfa are wholesome and gluten-free. Sweet potato is loaded with vitamin A, C, and manganese. Many nutritionists consider sweet potato as one of the best foods to eat. And cacao is filled with antioxidants and magnesium which will take care of your nervous system. 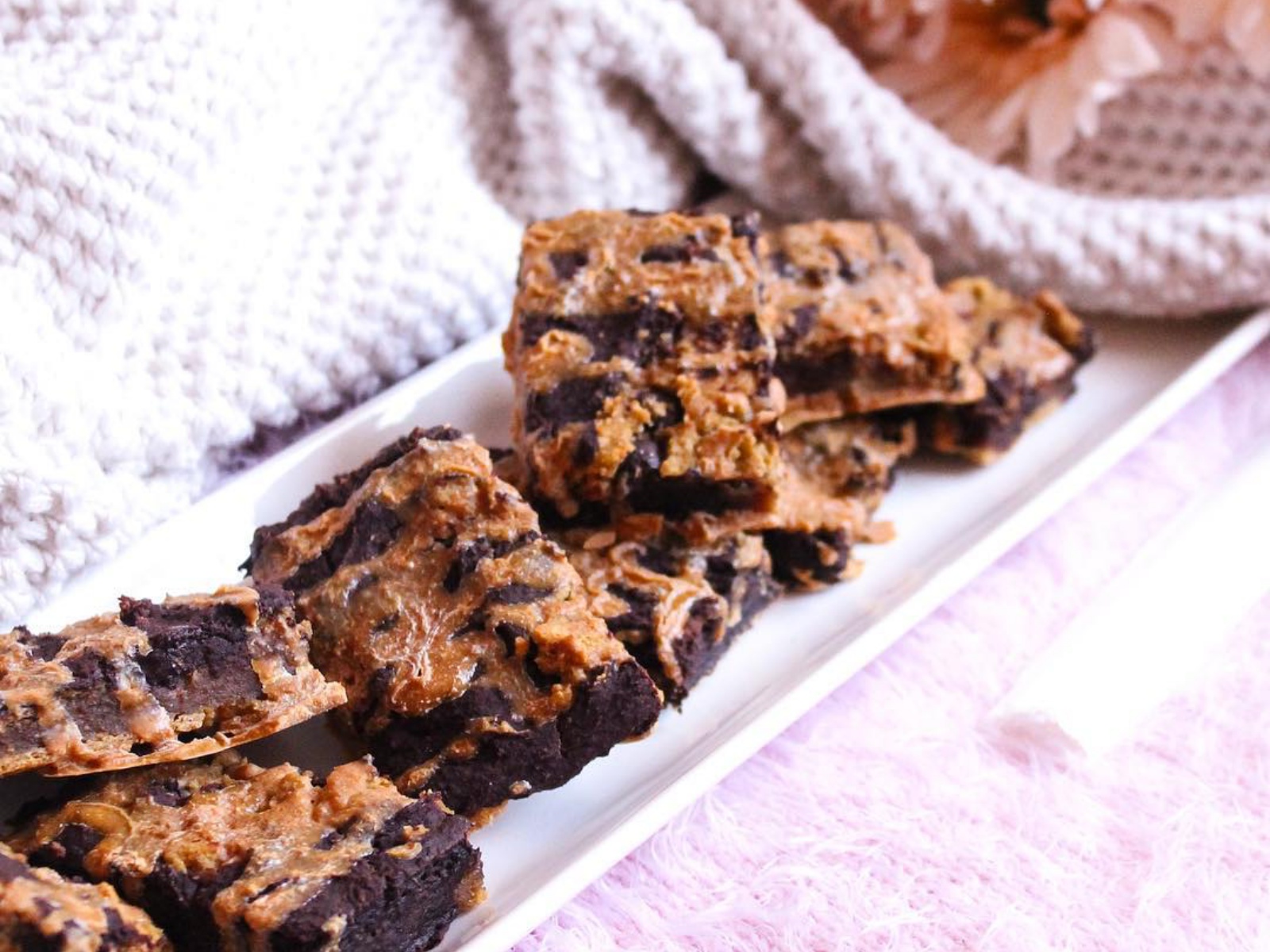 Brookie: A brownie combined with a cookie. It’s true. Both of these desserts have come together in these delicious (and secretly nutritious) Brookie Bars by Clara MacLeod! 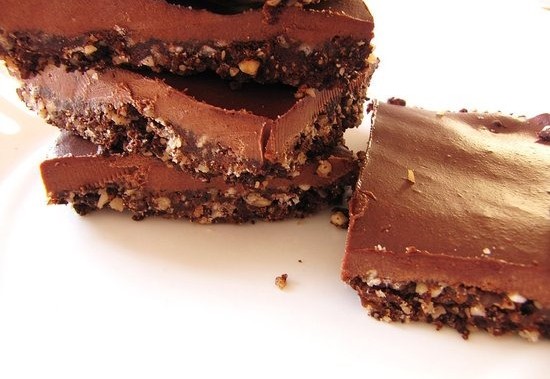 You must try these incredibly delicious and nutritious raw, Raw Vegan Brownies With Avocado Frosting by Amanda Froelich! 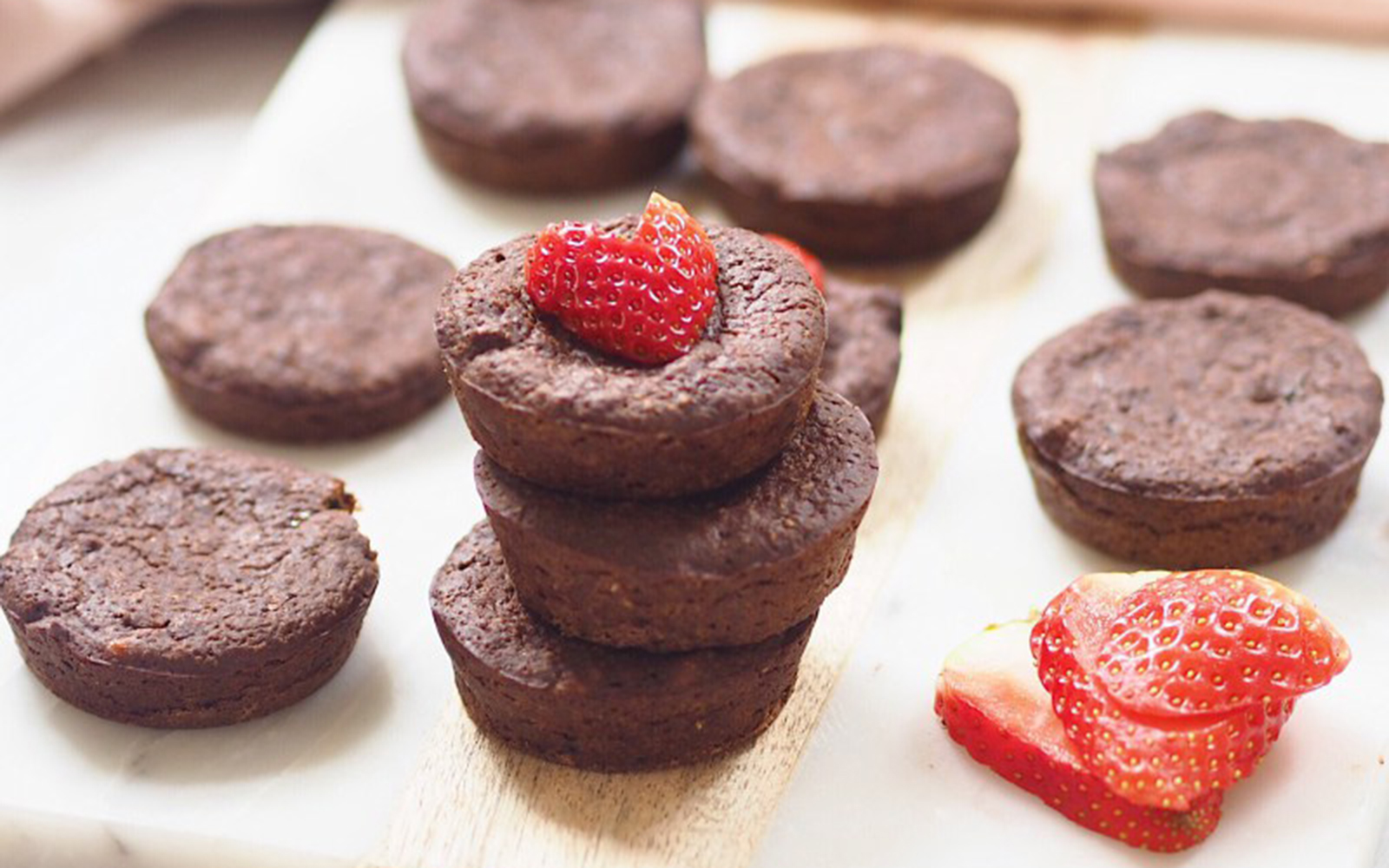 These vegan Mocha Chocolate Brownie Bites by Hayley Canning will satisfy your chocolate cravings in the healthiest way! They are really easy to make and taste just as good as they real thing. 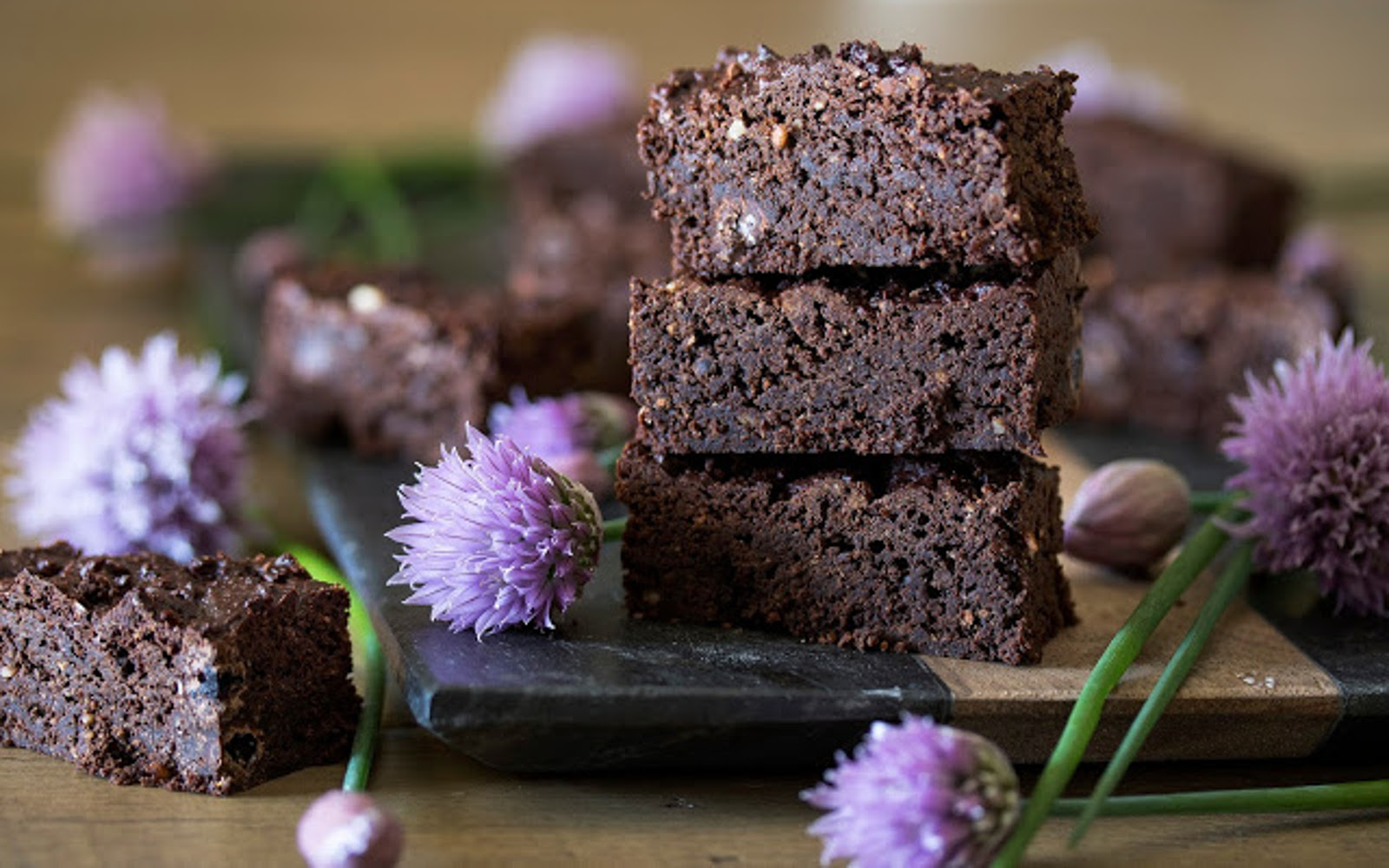 These Dark Chocolate Peanut Butter Brownies by Karen Kitto are deliciously rich and chocolatey. Make this when those cravings kick in and you need a little hit. This is a very decadent slice, perfect for those that love dark chocolate. 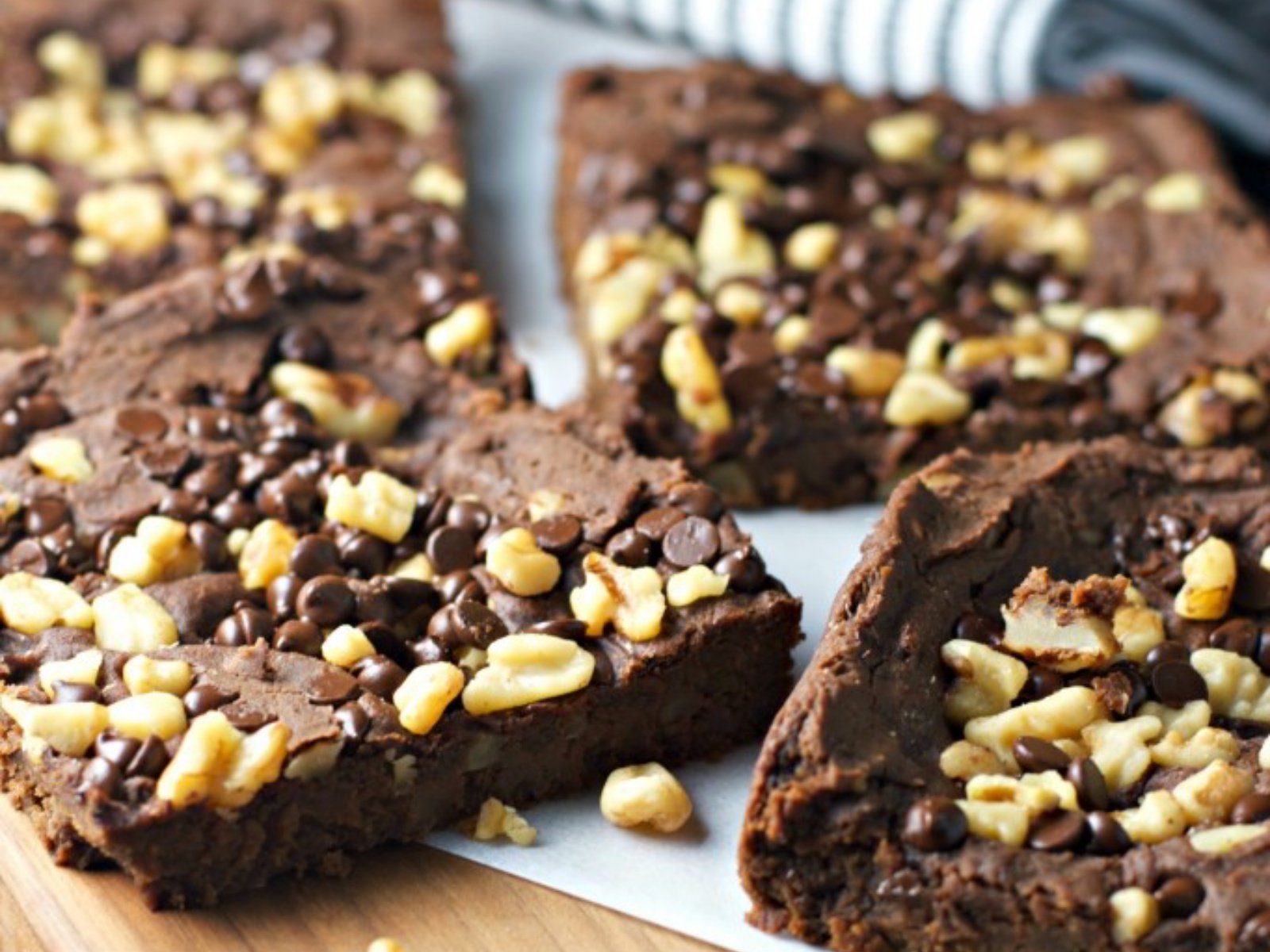 These Fudge Walnut Brownies by Crissy Cavanaugh use the same healthy base of chickpeas, but has added antioxidants from cacao powder and omega 3 fatty acids from walnuts! 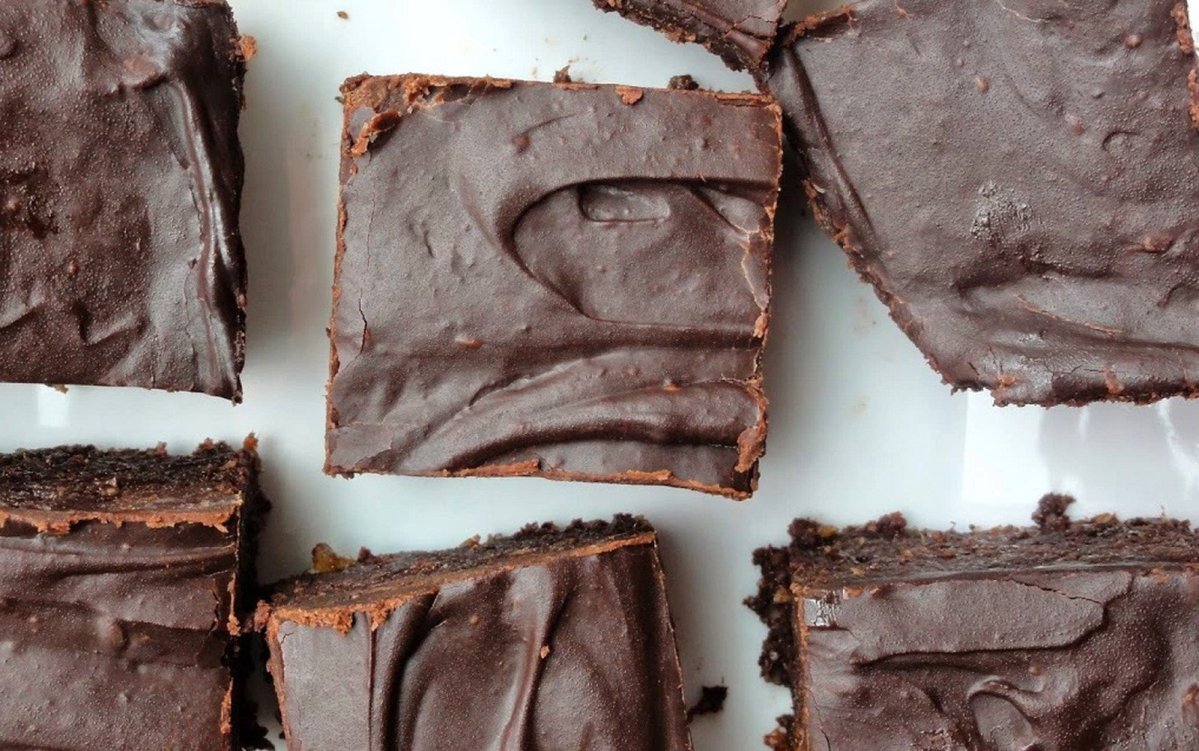 A touch of chili powder gives these scrumptious Raw Vegan Brownies by Faith VanderMolen quite a kick! The fudge glaze is the only part of the recipe that is not raw, so if you want to keep the brownies fully raw, feel free to omit the glaze. They will still be delicious! 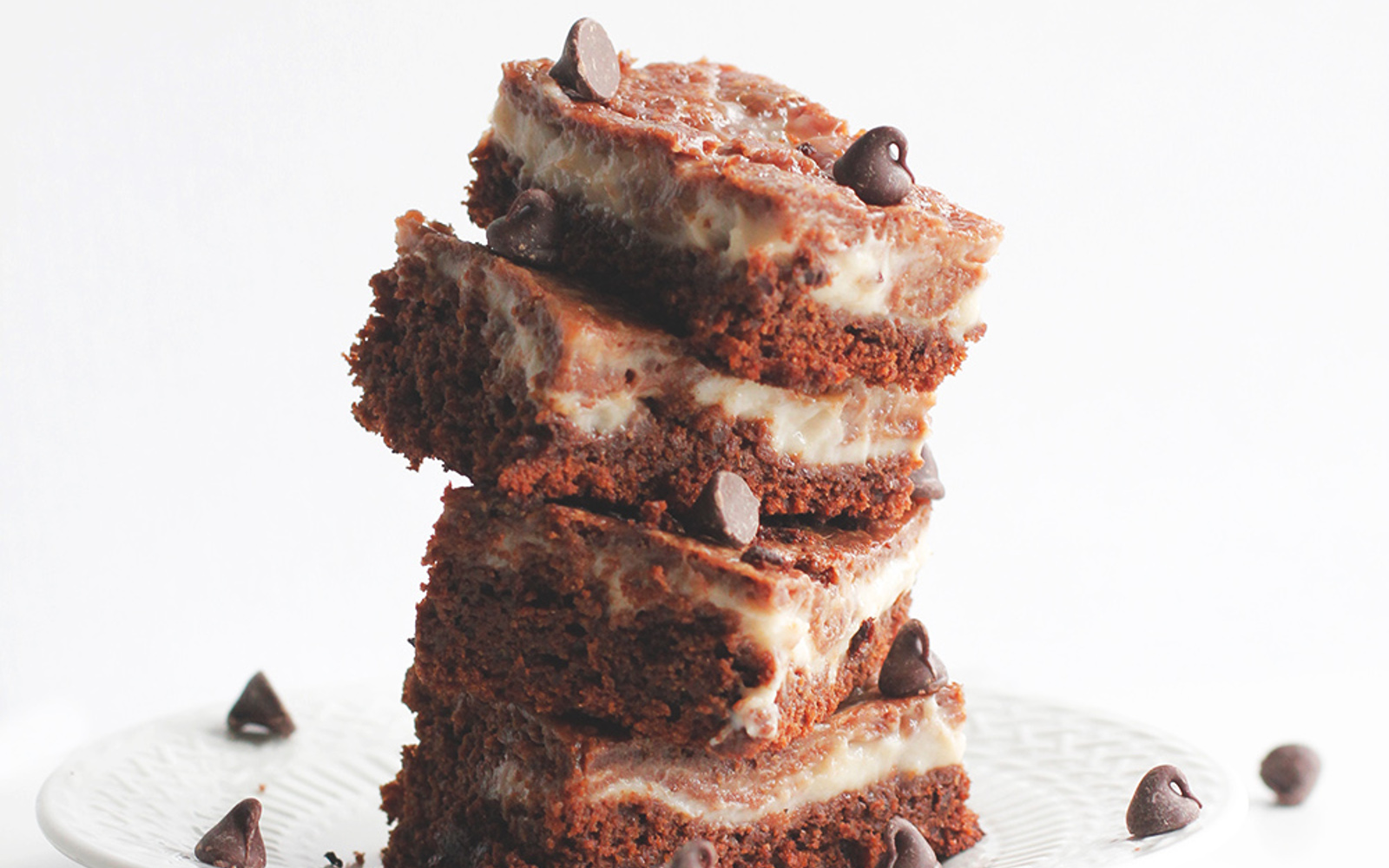 What do you get when you mix a rich and creamy cheesecake with a moist, chocolatey brownie? An incredible dessert! These Whole Wheat Cheesecake Brownies by Casey Muir Taylor are made with whole wheat flour, cocoa powder, and vanilla, and the cheesecake is the perfect amount of sweet. Pair these with a glass of almond milk for a yummy anytime snack. 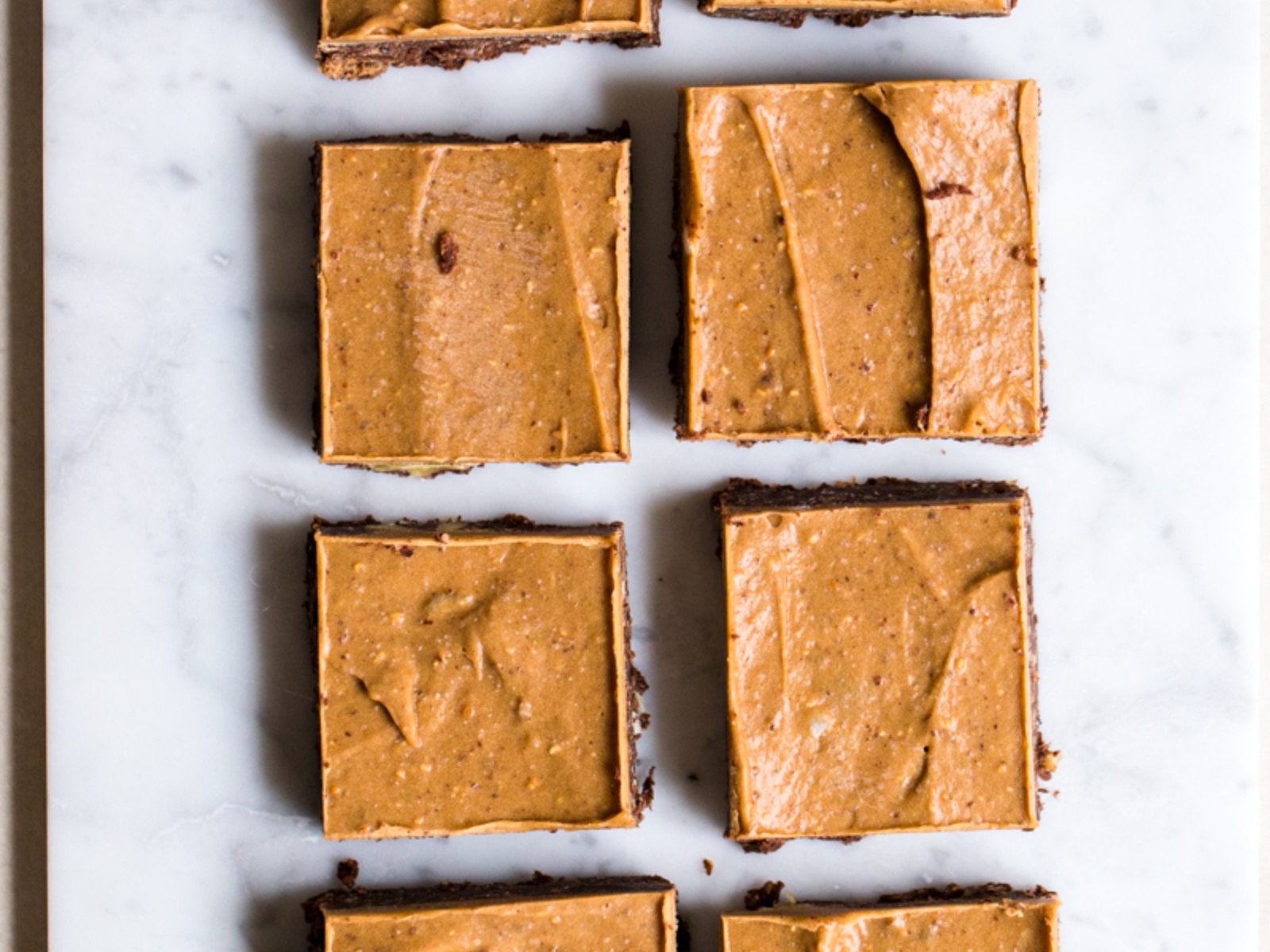 These Caramel Brownies by Natalie Yonan are almost raw and very simple to make! Rich, dense and super satisfying! 3 simple steps. Blend the no bake brownie ingredients in a food processor. Put some whole walnuts on top. Mix together the caramel ingredients and spread out evenly. 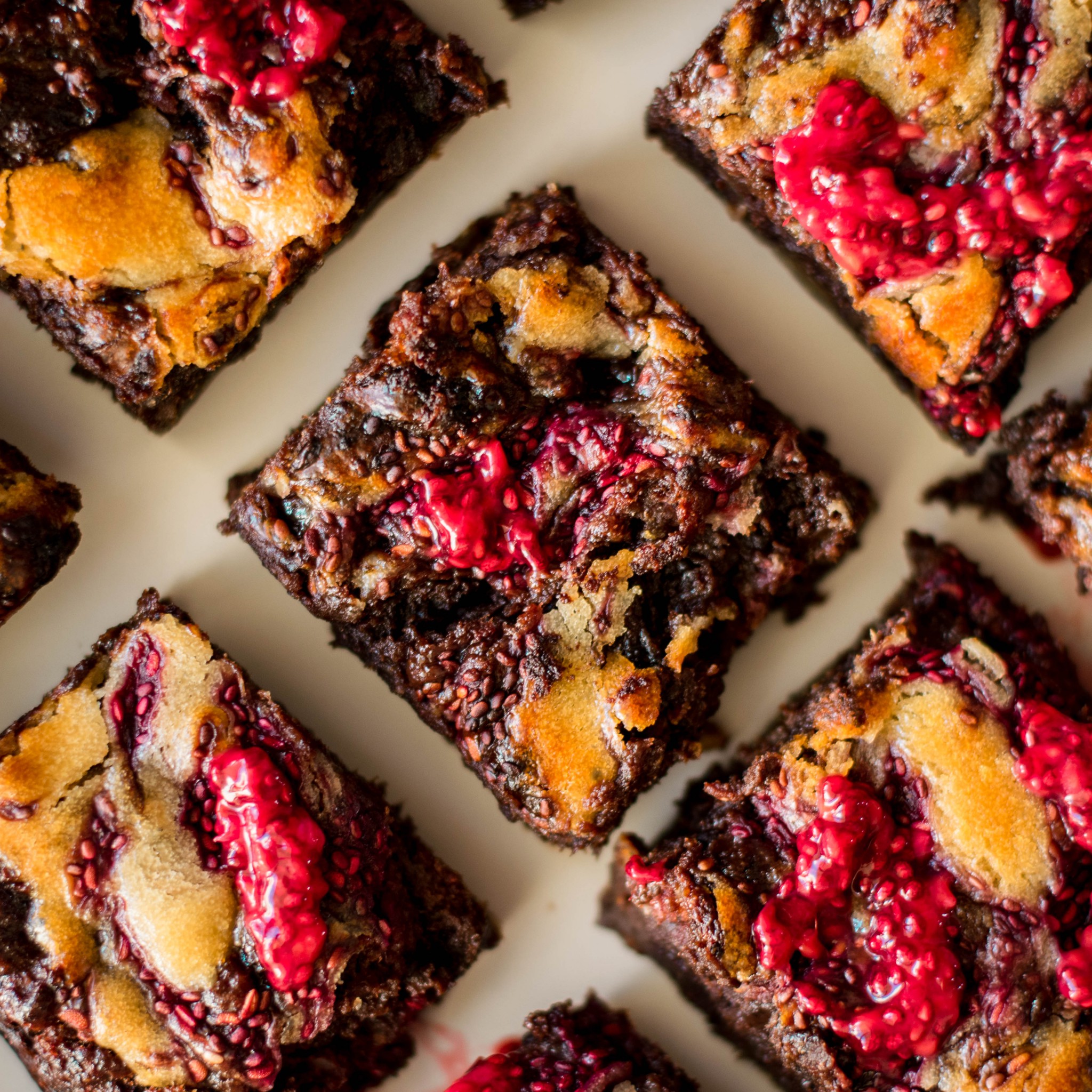 These Raspberry Peanut Fudge Brownies by Kirsten Kaminski are so incredibly fudgy, with a few crunchy walnut pieces on the inside, covered with a fruity and creamy layer on top! Apart from being incredibly delicious they’re also completely refined sugar-free, naturally sweetened by dates, filled with healthy fats from avocado and peanut butter, gluten-free and can even be made oil-free! Such a healthy, nutritious and tasty treat! Perfect for any occasion really! 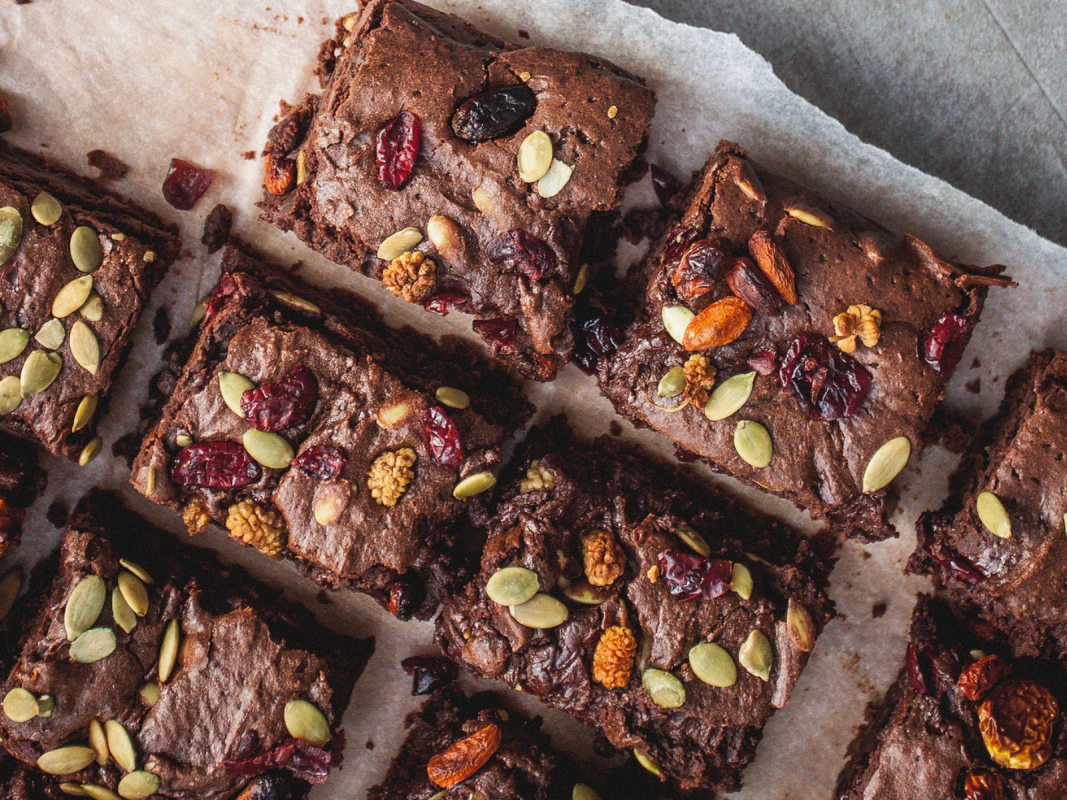 This Dark Chocolate Brownie by Julia Verkuil & Ellen Landman totally contains sugar, and even vegan butter! But it also contains tahini, and chocolate, and superfruit berries which are products that are totally good for you!

Love these vegan brownies and want more like this? Check out these 10 Vegan Blondie Recipes and these High-Protein Black Bean Brownie Recipes!