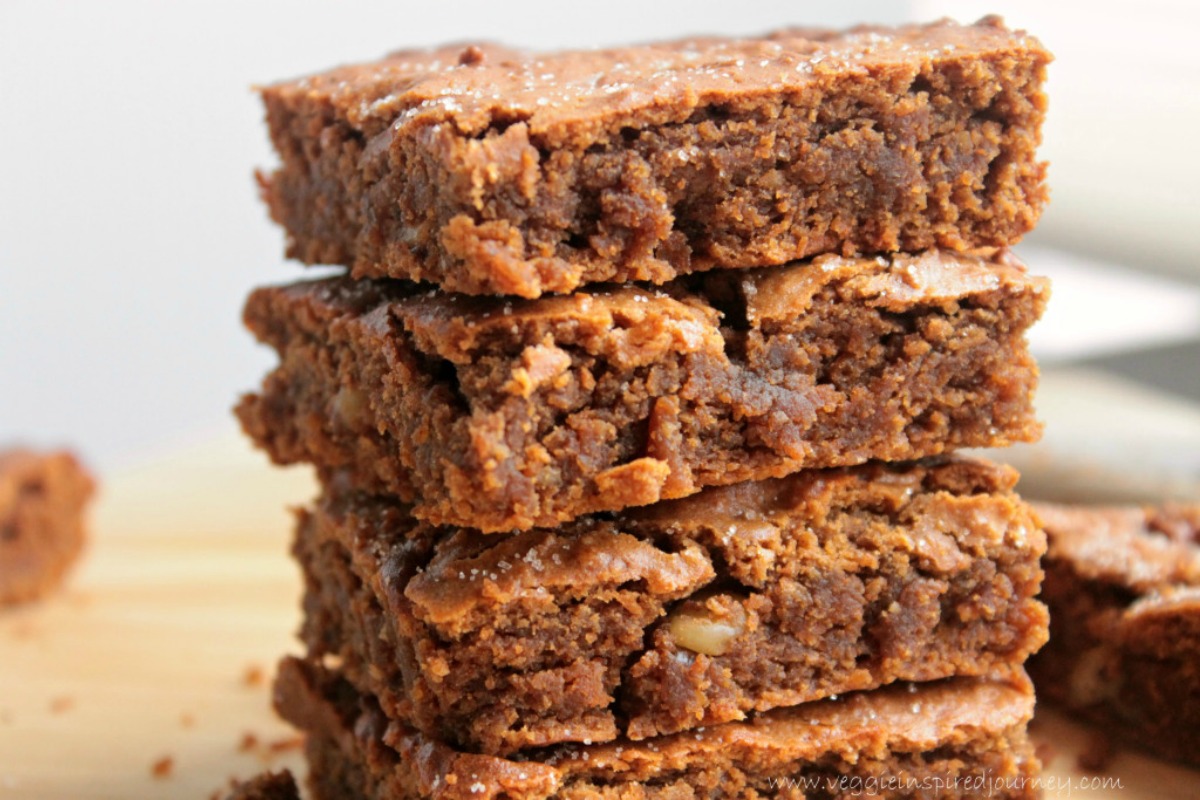 What do you get when you take a brownie and swap out the chocolate for a lovely vanilla flavor? One of our favorite desserts: a blondie! Delicious, soft and sweet, these treats are definite crowdpleasers and will make your whole kitchen smell awesome. Whip up some of these delicious blondie recipes from our Food Monster App to celebrate an awesome holiday! 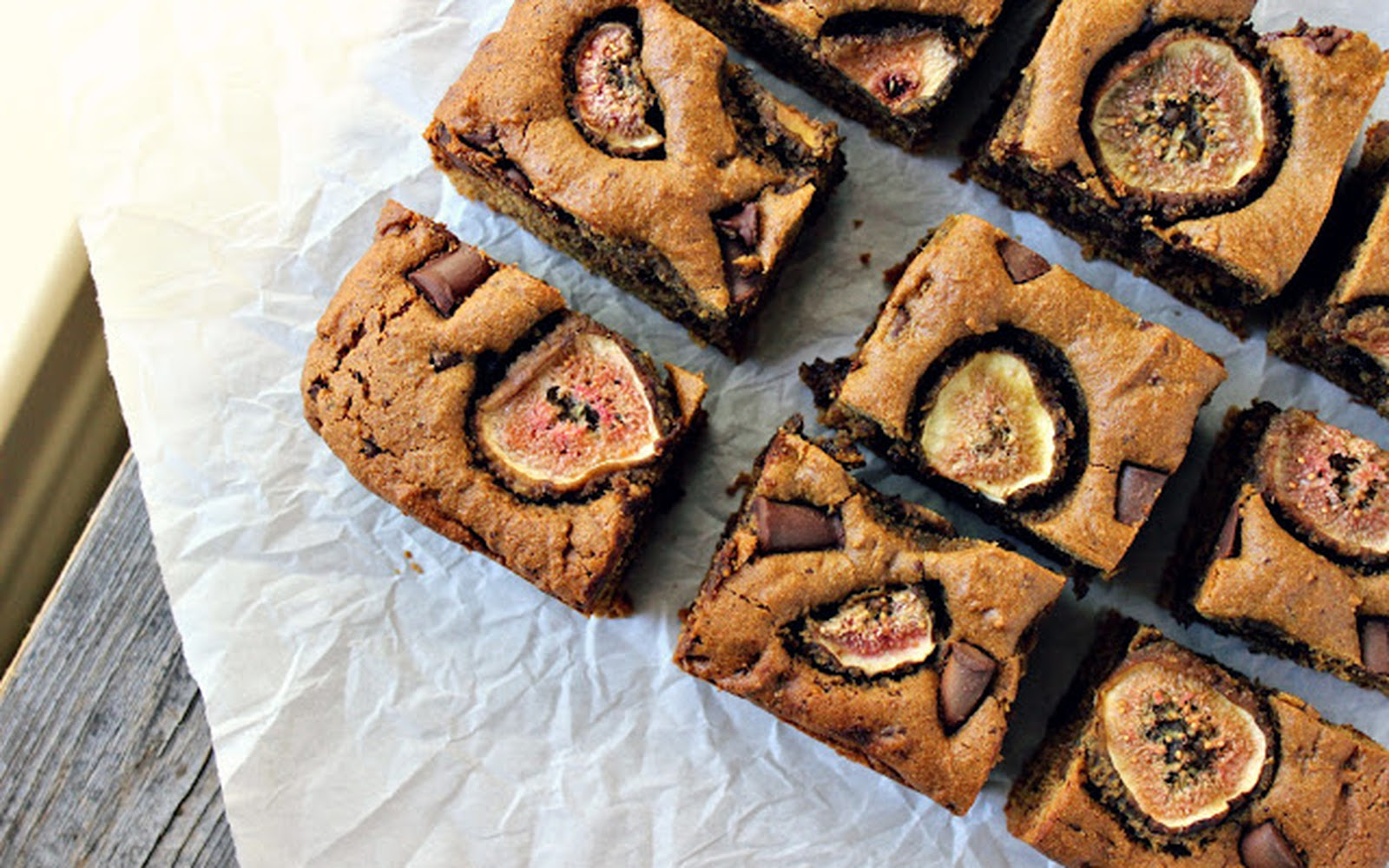 These Tahini Dark Chocolate Chunk Blondies With Caramelized Ginger and Figs from Courtney West are heavenly! Nutty tahini, dark chocolate chunks, caramelized ginger, and figs?! Does it really get any better than that? This could possibly be the ultimate autumn dessert. (Plus, it’s pretty good for you, as far as desserts go!)

These Cinnamon Chickpea Blondies from Jenn Sebestyen will be your new go-to treat! They are moist and tender in the center with just a bit of a crackly crust on top. They are perfectly sweet, healthier than your average blondie recipe, and oh-so addictive! While these do contain a good amount of sugar, they are also packed with protein, fiber, folate, and iron, so you can feel good about your new afternoon treat! Oh, and guess what? They are gluten-free and oil-free too! 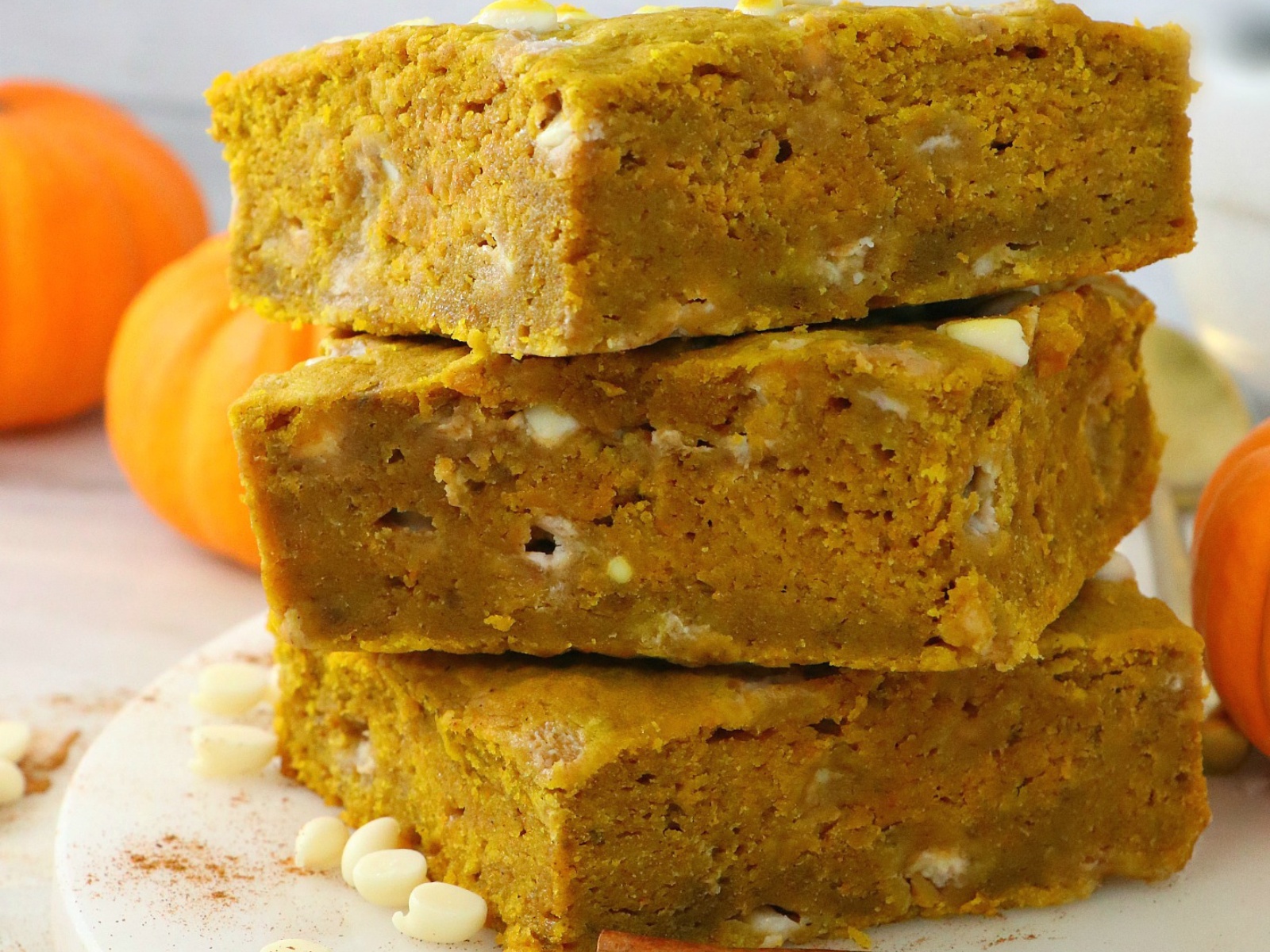 What’s fab about this White Chocolate Pumpkin Blondies recipe from Gabrielle St. Claire? Everything! It’s quick, easy, has accessible ingredients (minus the white chocolate, but you can get that on Amazon), it’s seasonal, features no dairy or eggs, packed with pumpkin, has aesthetic appeal, and perf for the the fall season! If you love all things pumpkin or simply modern vegan treats, you have to try this recipe for vegan White Chocolate Pumpkin Blondies! 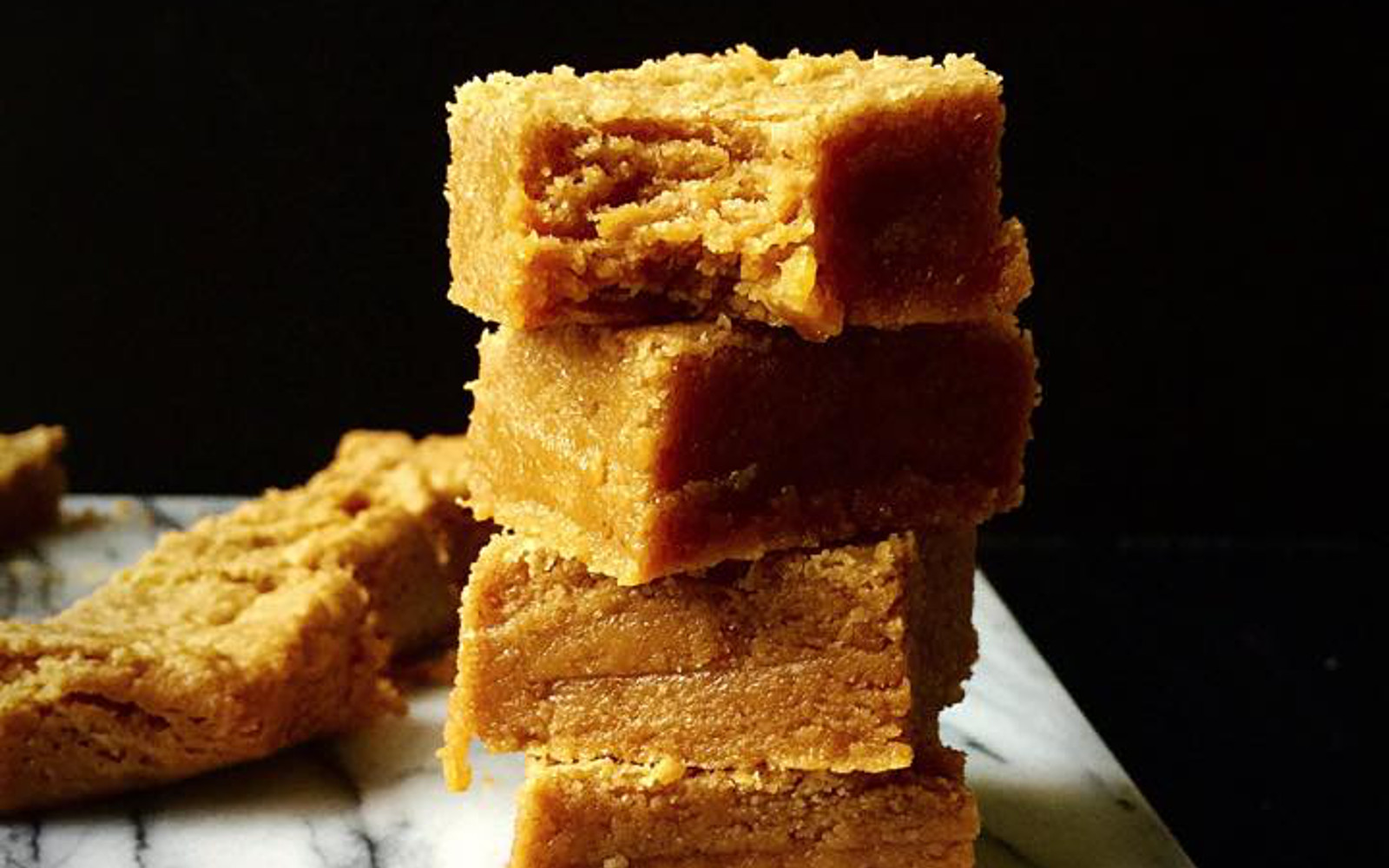 Only seven ingredients, one bowl, and half an hour’s time, these Maple Peanut Butter Blondies from Medha Swaminathan are no-stress, but totally delicious.They’re extremely moist and fudgey and packed with maple and peanut butter — perfect for the holidays! 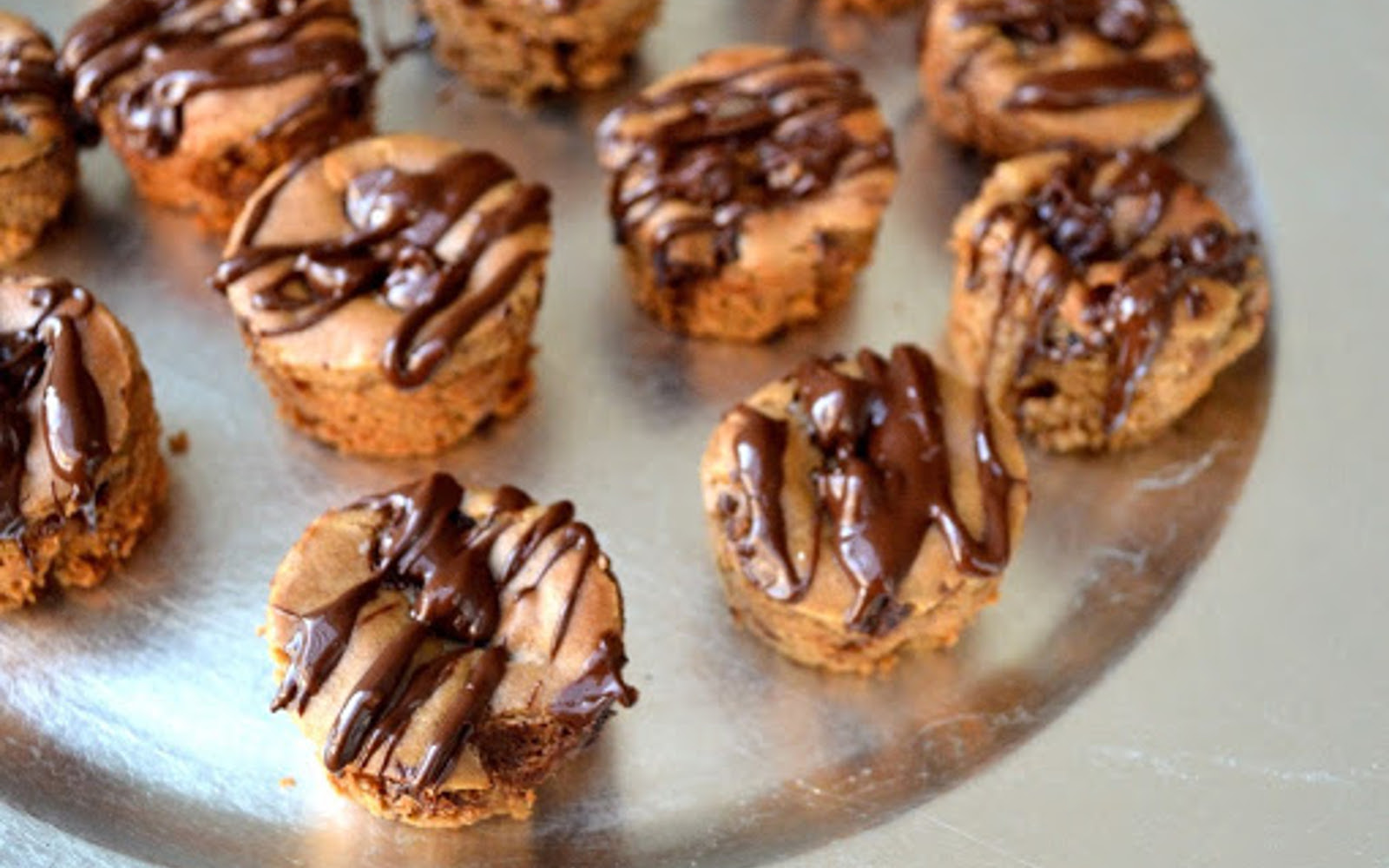 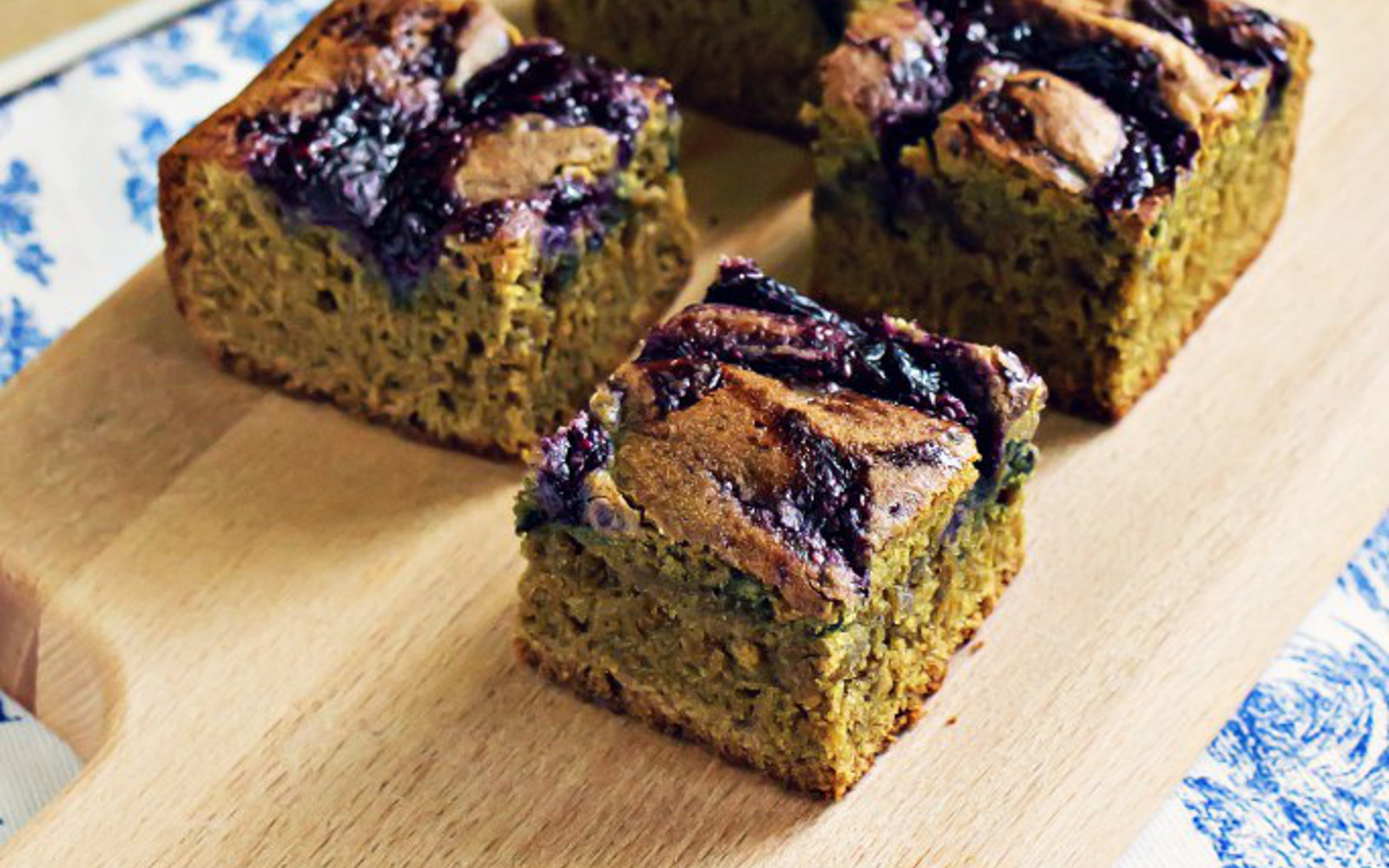 You would never guess that these blondies are gluten-free. Made from a blend of sweet rice, teff, and oat flours, they’re sweet and moist, thanks to tahini and applesauce. Although delicious on their own, these blondies are taken to the next level with a blend of blueberry chia jam sweetened with a delicate touch of maple syrup. Whether you’re looking for a crowd-pleasing dessert to bring to a potluck or seeking something to satisfy your craving for something sweet, these Tahini Blondies With Blueberry Chia Jam Swirl from Courtney West will do just the trick. 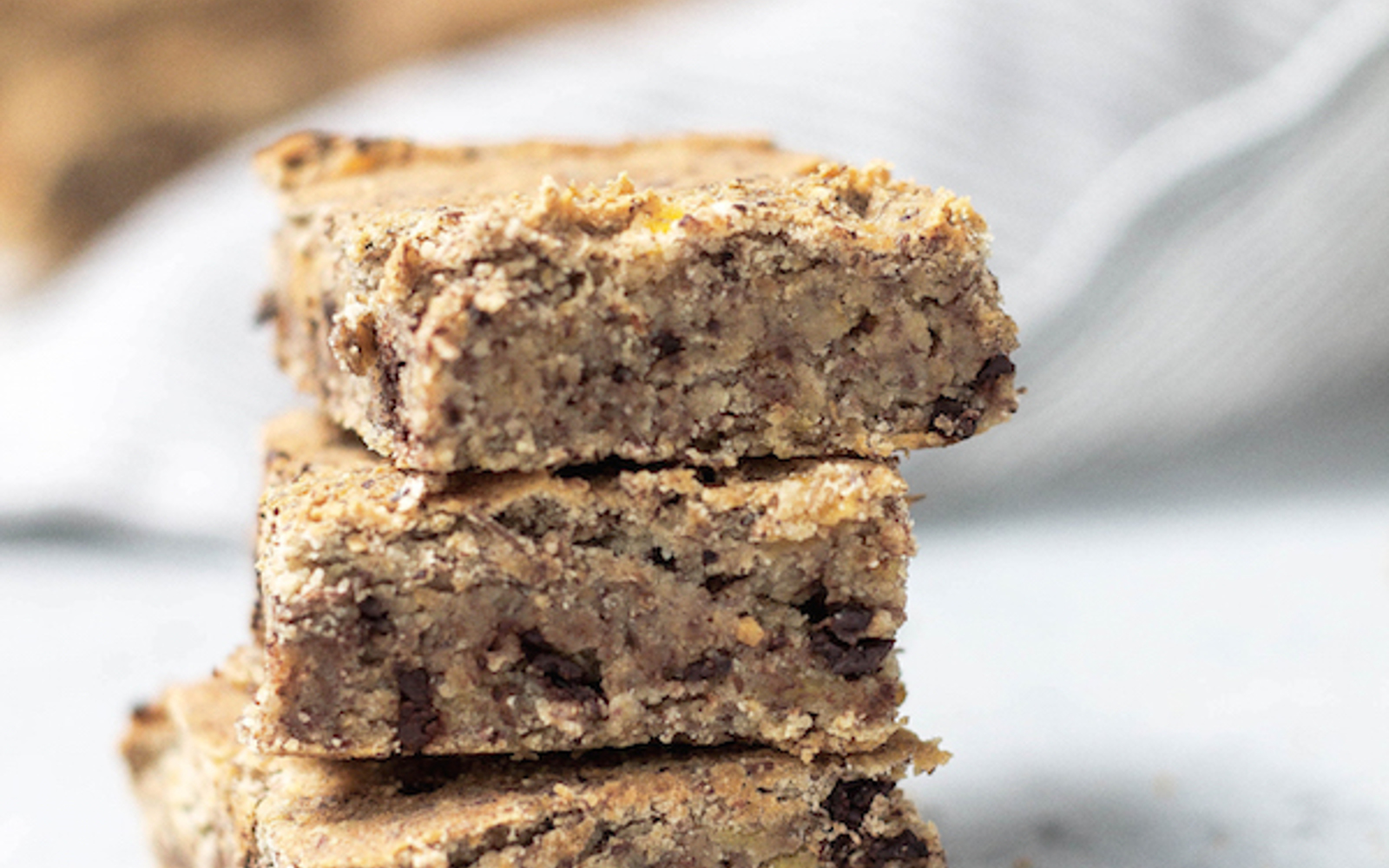 These Paleo Plantain Blondies from Alison Marras are moist, chewy in the middle with a light golden crust on top, and naturally sweet from yellow plantains. They have no added sugar at all, so you can snack without the sugar crash. Eat these for dessert or breakfast — they’re that good! 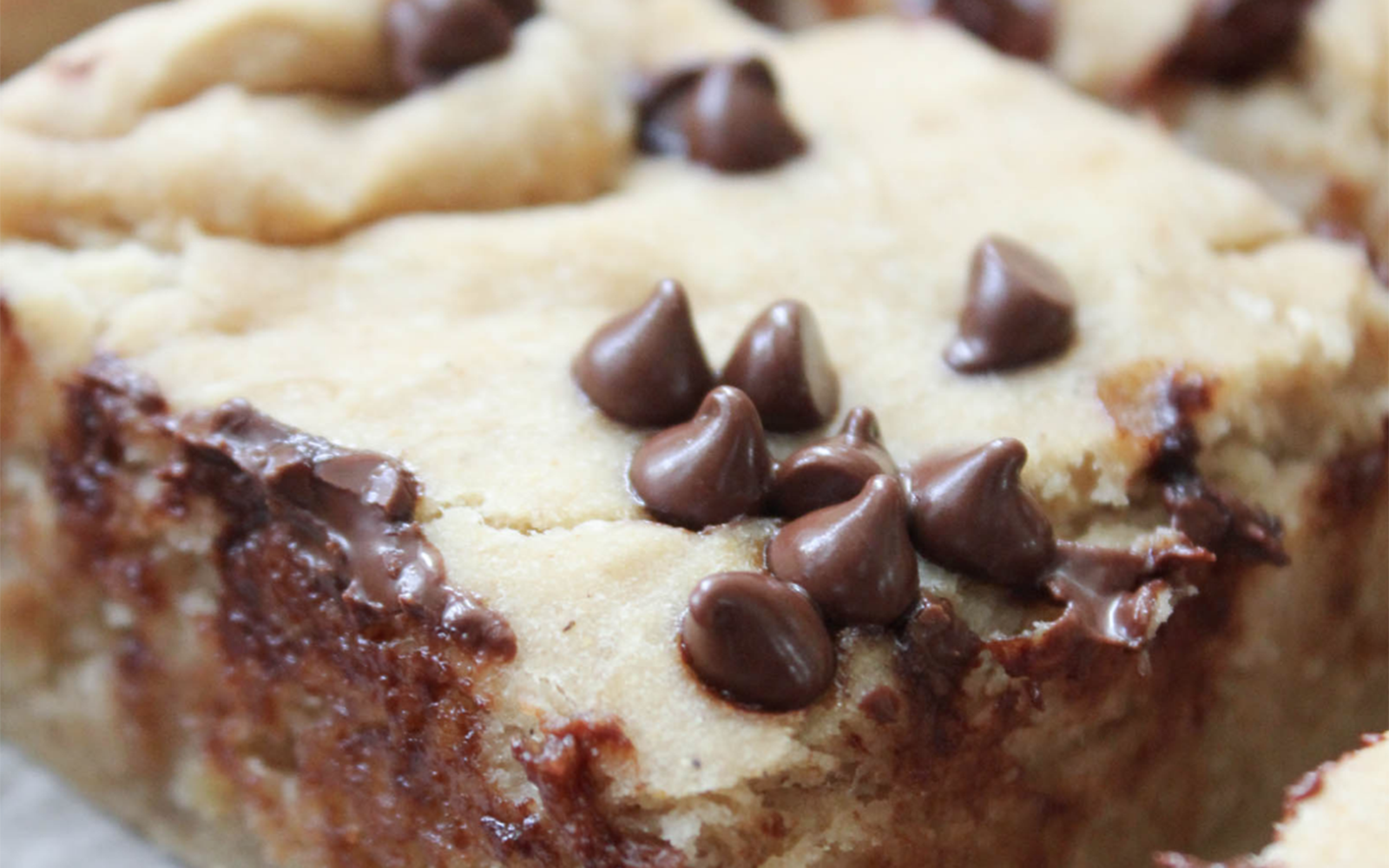 When you have an abundance of spotted bananas… you get creative and then add chocolate for an over-the-top, healthy treat! These Easy Almond Banana Blondies from Robin Runner will be gone in less than 24 hours in your kitchen. 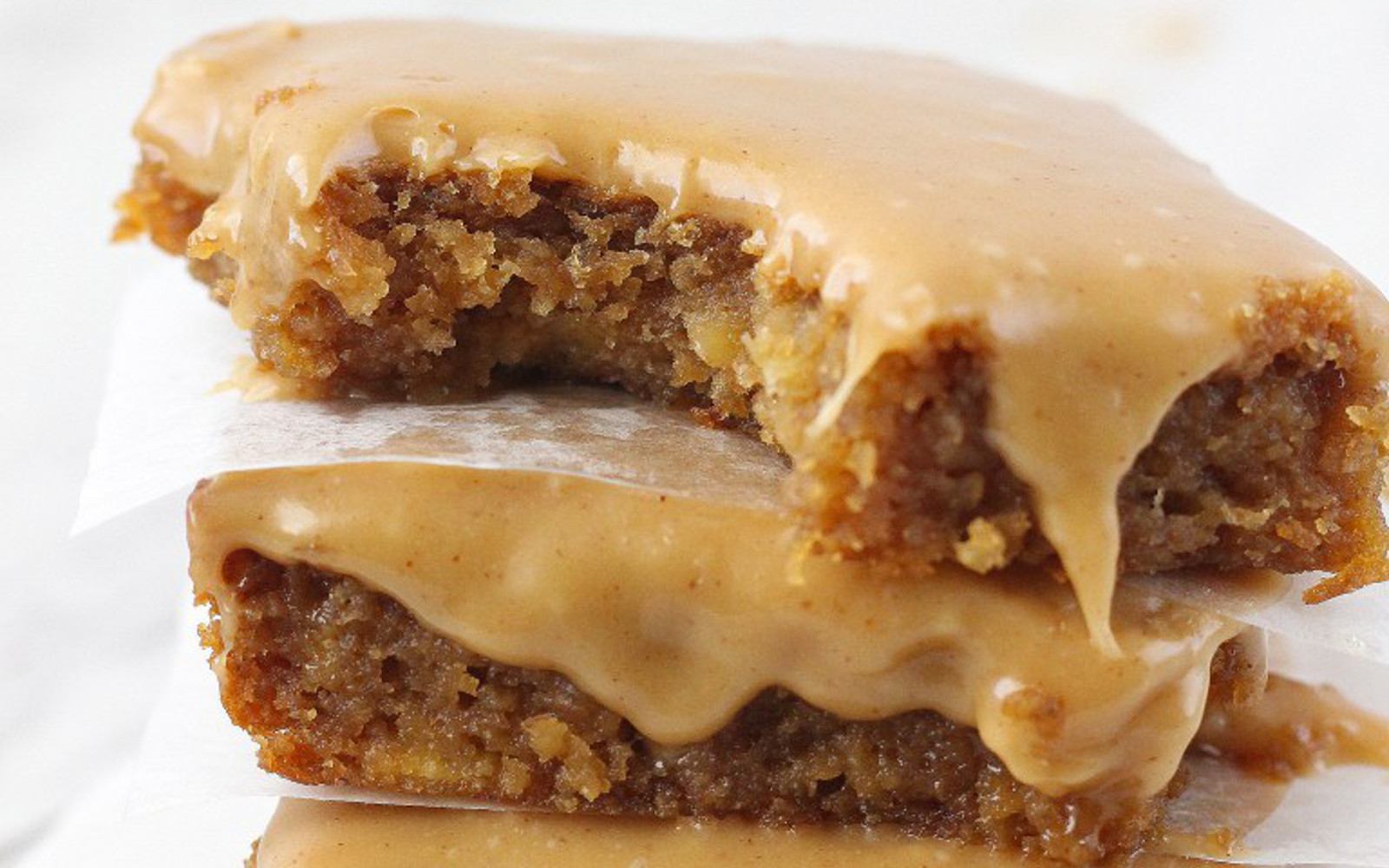 These gluten-free and vegan Banana Blondies With Caramel Frosting from Kat Condon are a fudgy, banana treat! Delicious banana blondies are covered in a simple dairy-free caramel frosting that takes the entire recipe over the top. Just try not to eat all of the frosting before they make it to the blondies- we know its a challenge. 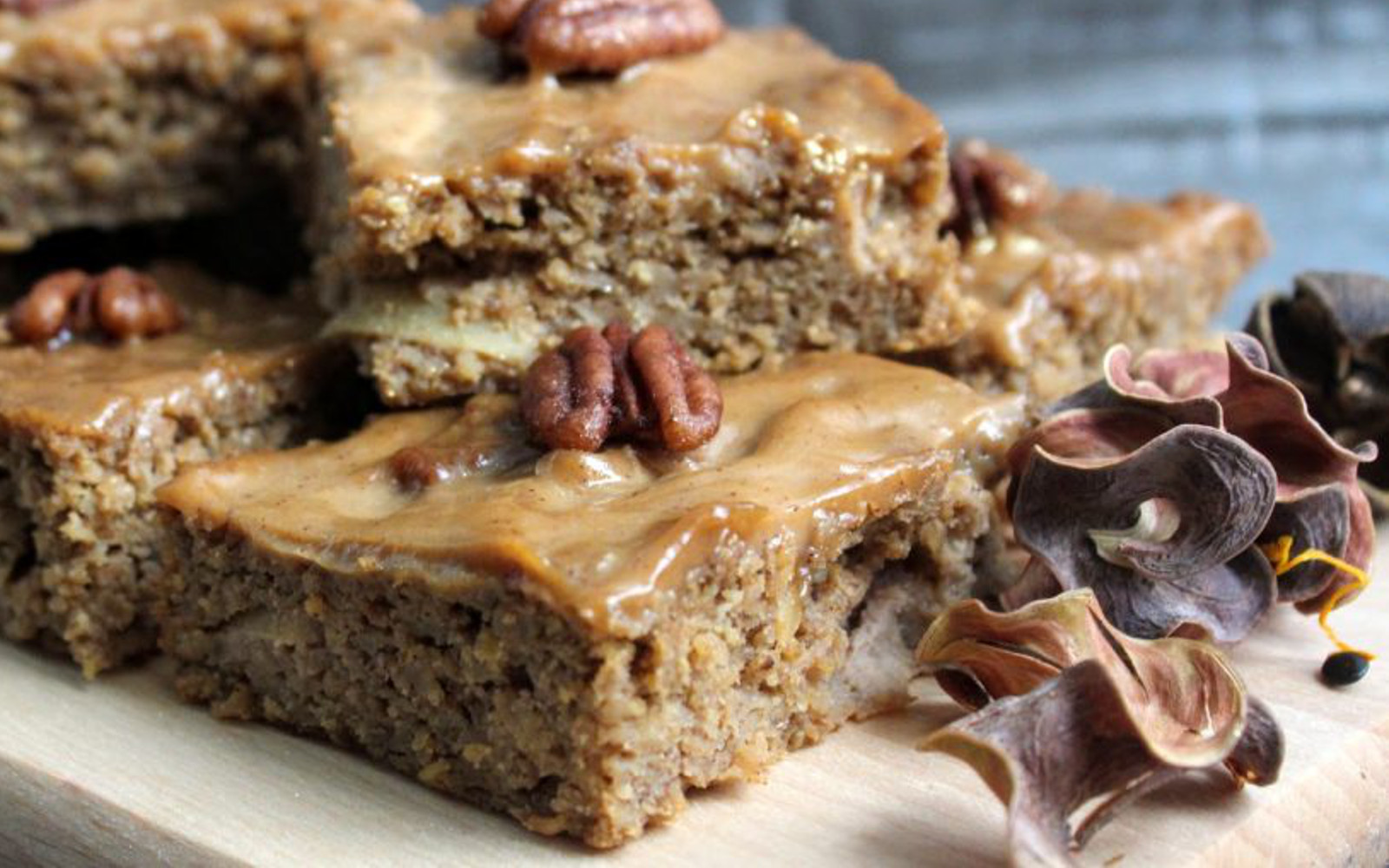 Another winner of a dairy-free, vegan, gluten-free, and no refined sugar autumnal treat! These Spiced Apple and Almond Butter Blondies from Pamela Higgins are amazing, and easier to make than your average apple pie, and even richer, too.

Need more dessert recipes? We highly recommend downloading our Food Monster App, which is available for both Androidand iPhone, and can also be found on Instagram and Facebook. The app has more than 15,000 plant-based, allergy-friendly recipes, and subscribers gain access to new recipes every day. Check it out!