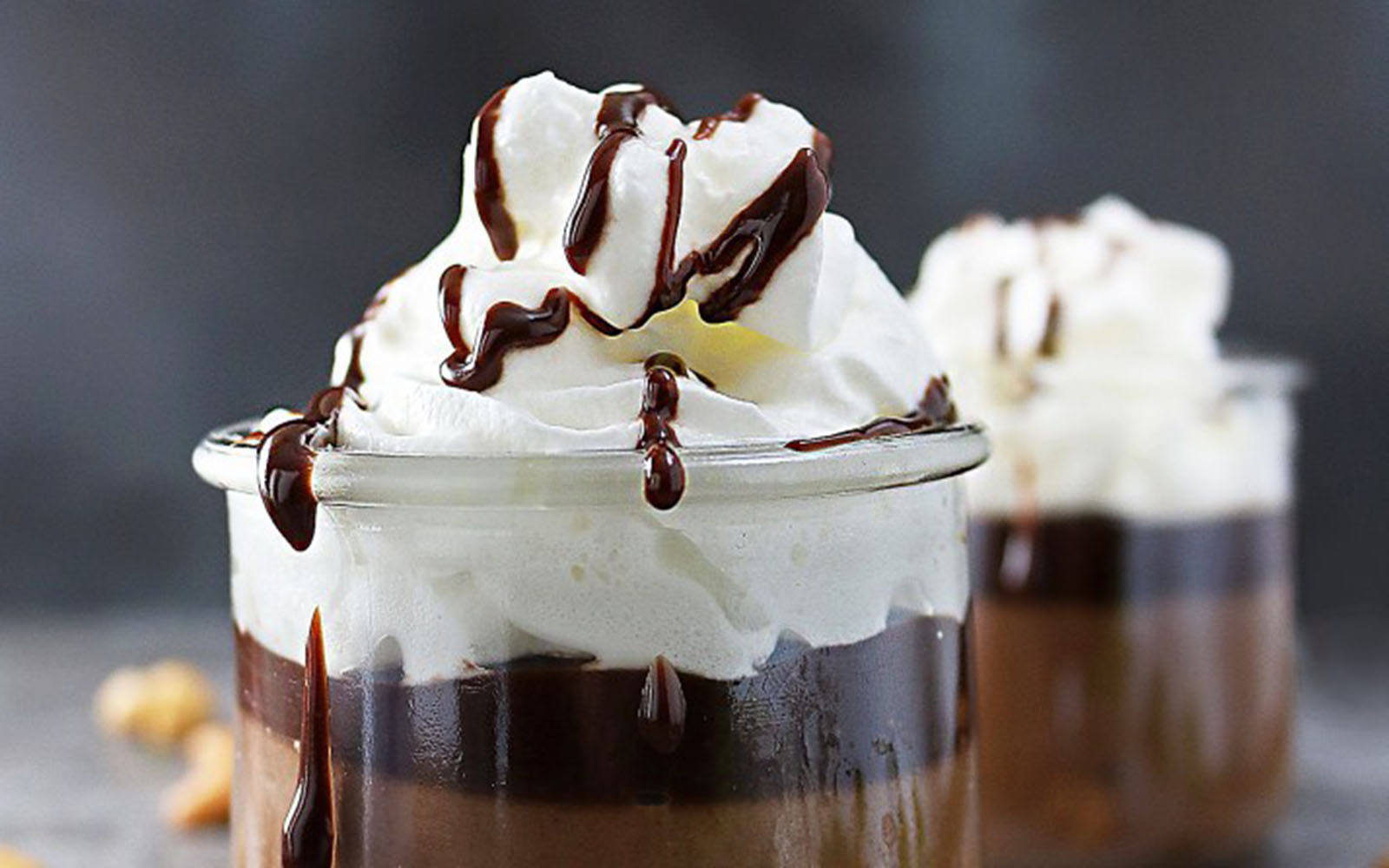 While chocolate pudding’s history stretches back into the 17th century, most people know it as a childhood snack. All of us can remember bartering our sack lunches for coveted treats on the playground and there was one item that was prized above all else – the chocolate pudding cup. Inside that tiny plastic cup, was a luxuriously creamy pocket of velvety chocolate pudding that was worth at least three bags of fruit snacks.

Chocolate pudding was the king of the playground. But just because we’re too big for the monkey bars doesn’t mean we have to give up our favorite treat! We can update it a bit though – we’re adults after all. Making a healthier, plant-based chocolate pudding is quick, fun, and super easy. Plus, you won’t have to deal with all that wasteful plastic packaging that comes from buying a pudding cup. If you want to make this process even easier, download the Food Monster App and you’ll have tons of delectable chocolate pudding recipes at your fingertips! And because June 26th is National Chocolate Pudding Day, we’re going get in touch with our inner child and throw down some delicious and dairy-free chocolate pudding recipes!

You won’t be able to resist this decadent Chocolate Cashew Pudding by Shashi Charles! It’s gluten-free, so creamy, and with a little twist to make it more exciting. 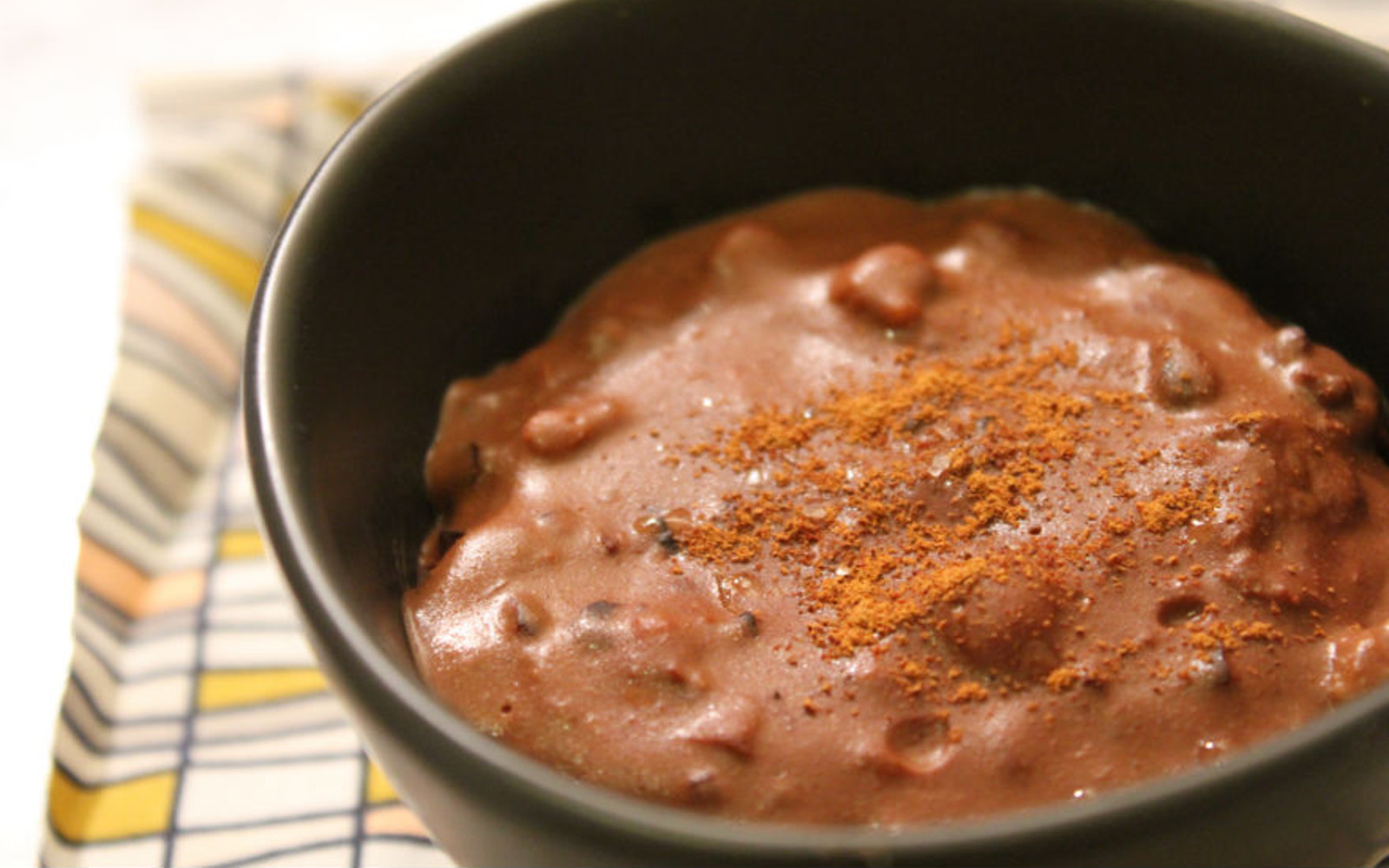 A more grown-up twist on the regular chocolate pudding! This Luxurious Dark Chocolate Apricot Pudding by Amy Height has some interesting flavors from apricot, walnuts, cacao nibs, and some sea salt for some great balance! 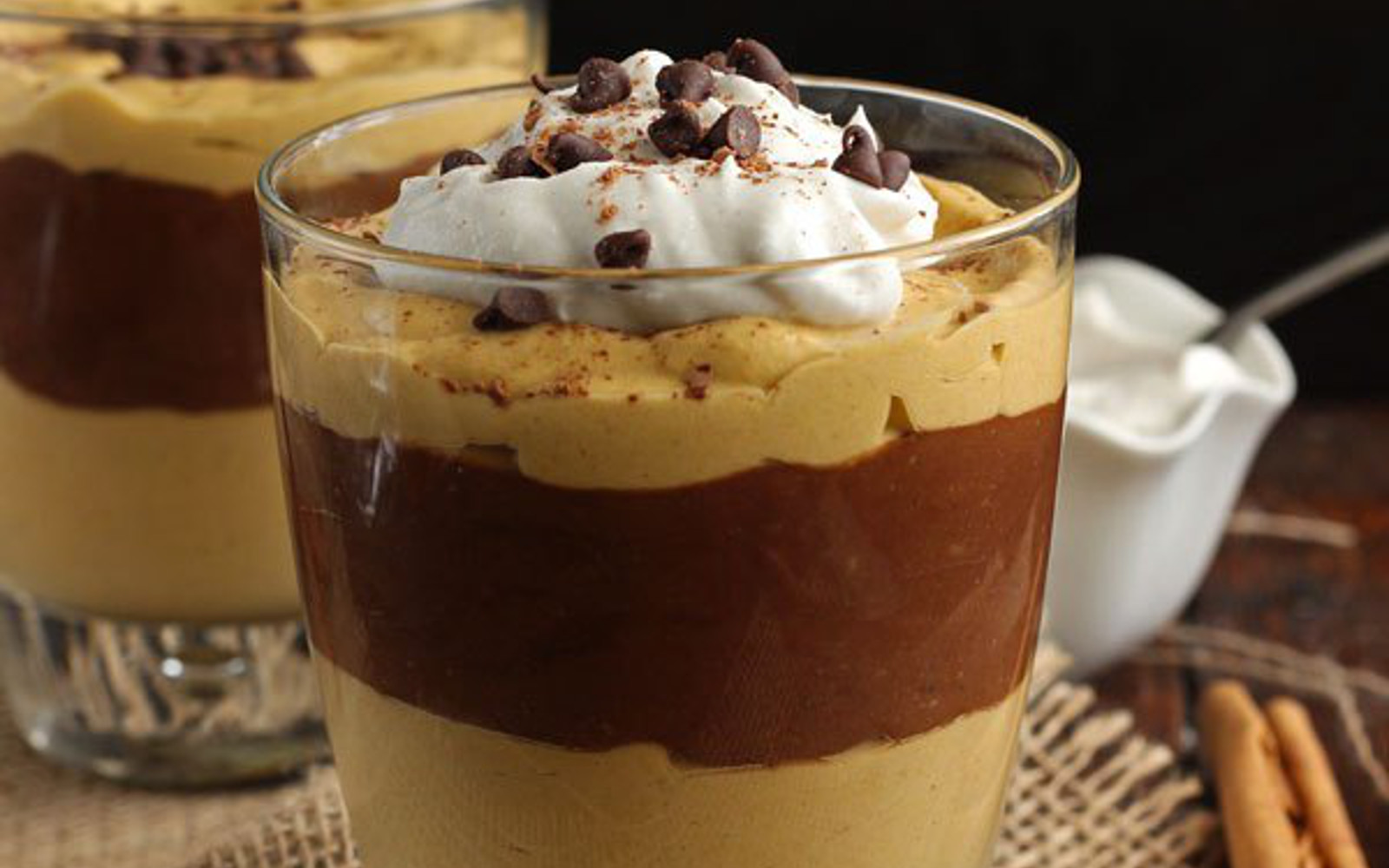 Pumpkin and chocolate together? Yes! It makes the most delicious and moist pudding, so next time you’re craving something sweet and a little unexpected – here’s Kat Condon‘s recipe for the Chocolate Pumpkin Pudding Parfait you need in your life! 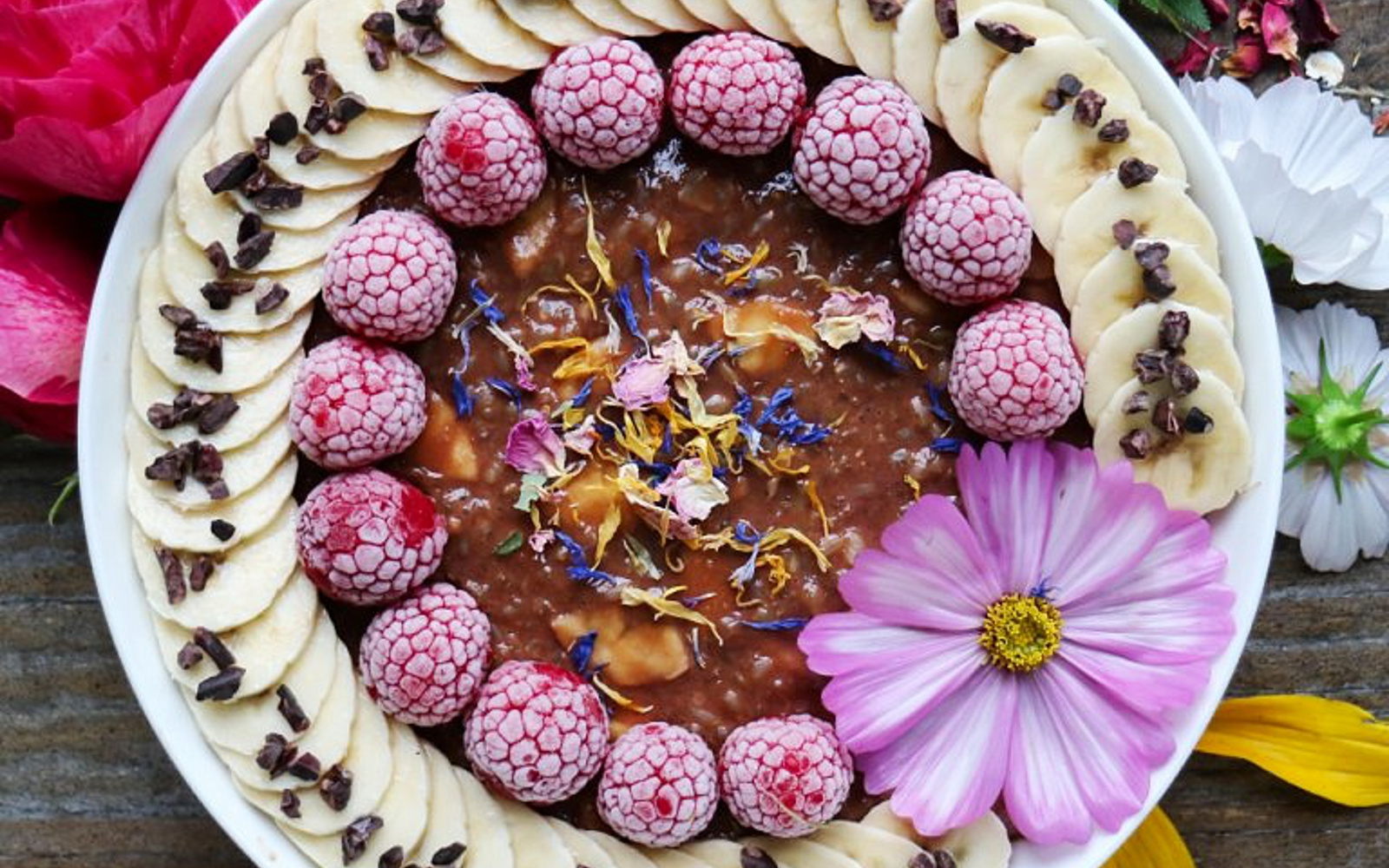 This beautiful creation has all the chocolaty flavors you’re craving from a dessert! Or maybe for breakfast? This Chocolate and Banana Mochi Rice Pudding by Katja Meier is actually healthy and nutritious, so you might as well enjoy it anytime during the day! 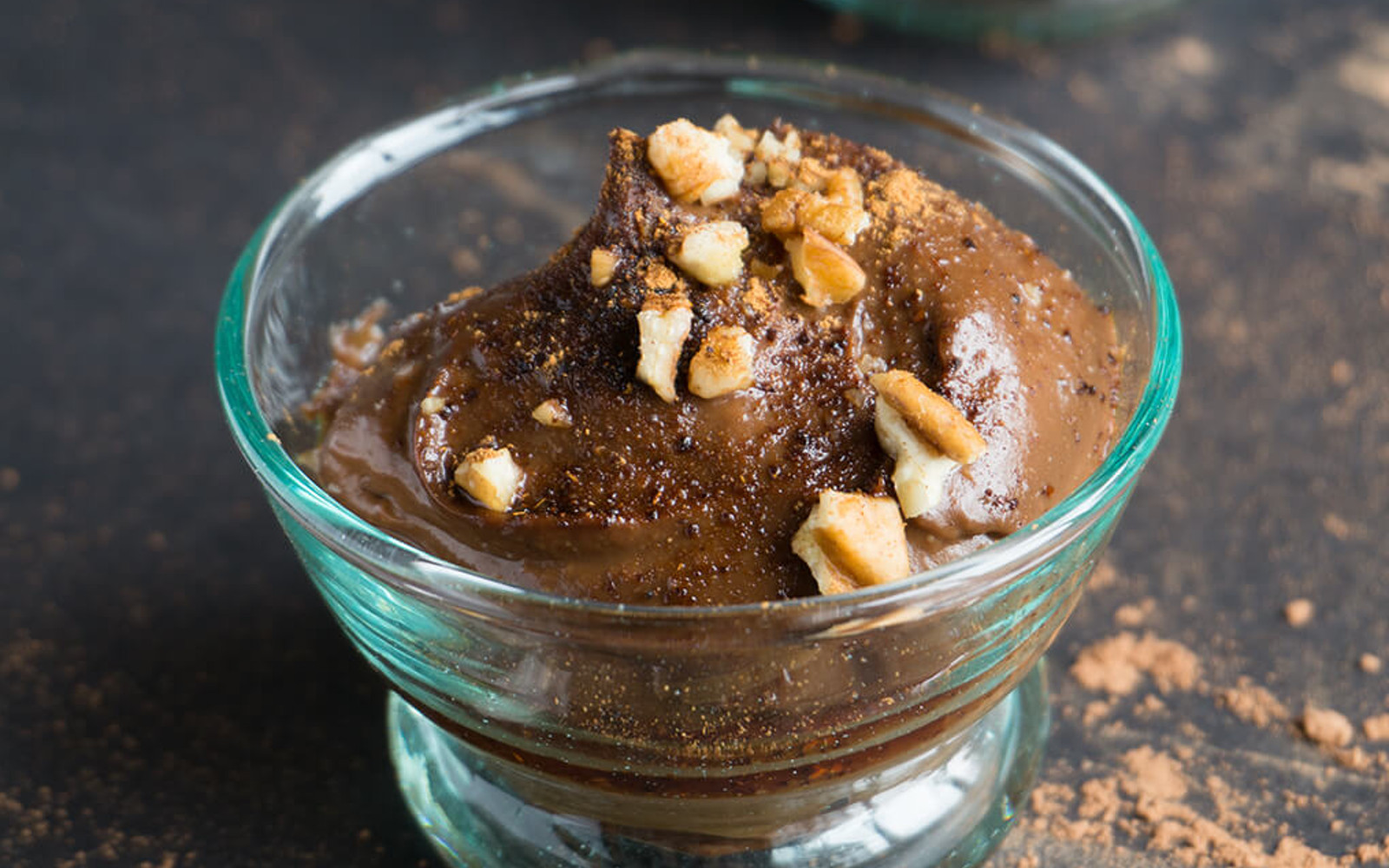 Avocado in a dessert might seem a little odd, but it actually makes the dessert super creamy, delicious, and full of nutrition! You should definitely try it out time the next you’re craving a chocolate pudding, here’s Emily Brees‘ Mexican-Spiced Chocolate Avocado Pudding! 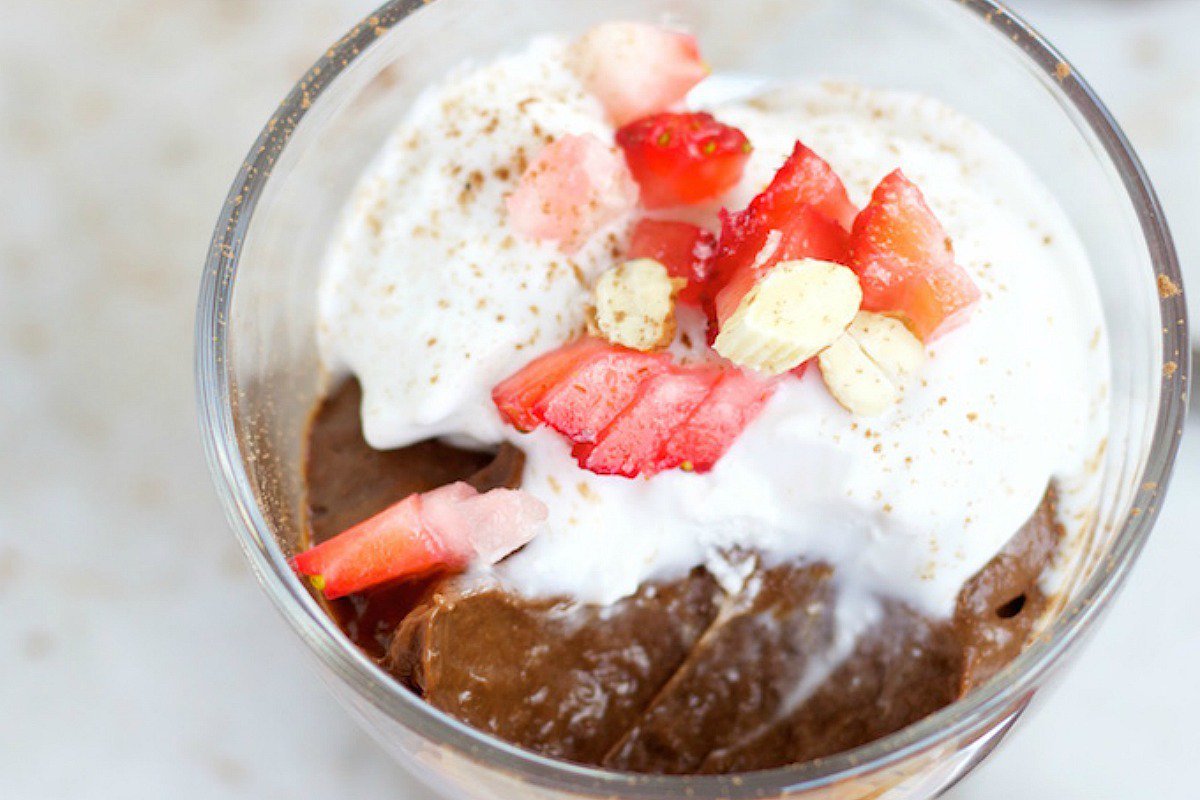 Do you have five minutes to spare? You should definitely spend them make this Chocolate Pudding and Banana: Magic in 5 Minutes by Alejandra Graf! Definitely a bowl of magic, with dates, bananas, avocado, cocoa powder, and some vanilla, cinnamon, and salt. You’re gonna love it! 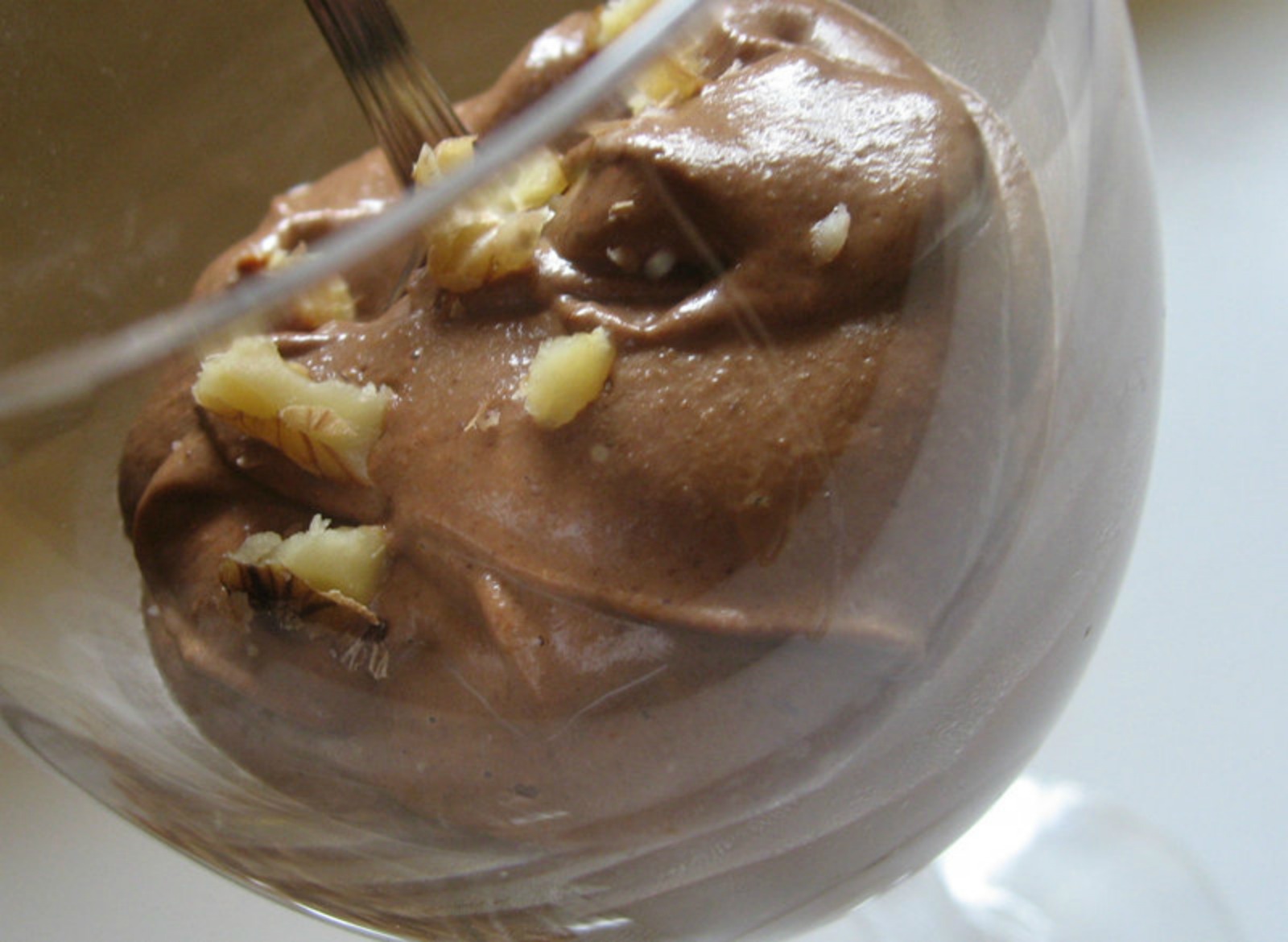 This Raw Chocolate Chia Pudding by v has a base of walnuts and cashews, for a little twist on the traditional chia pudding! The texture is rich and deep, as well as being totally delicious. 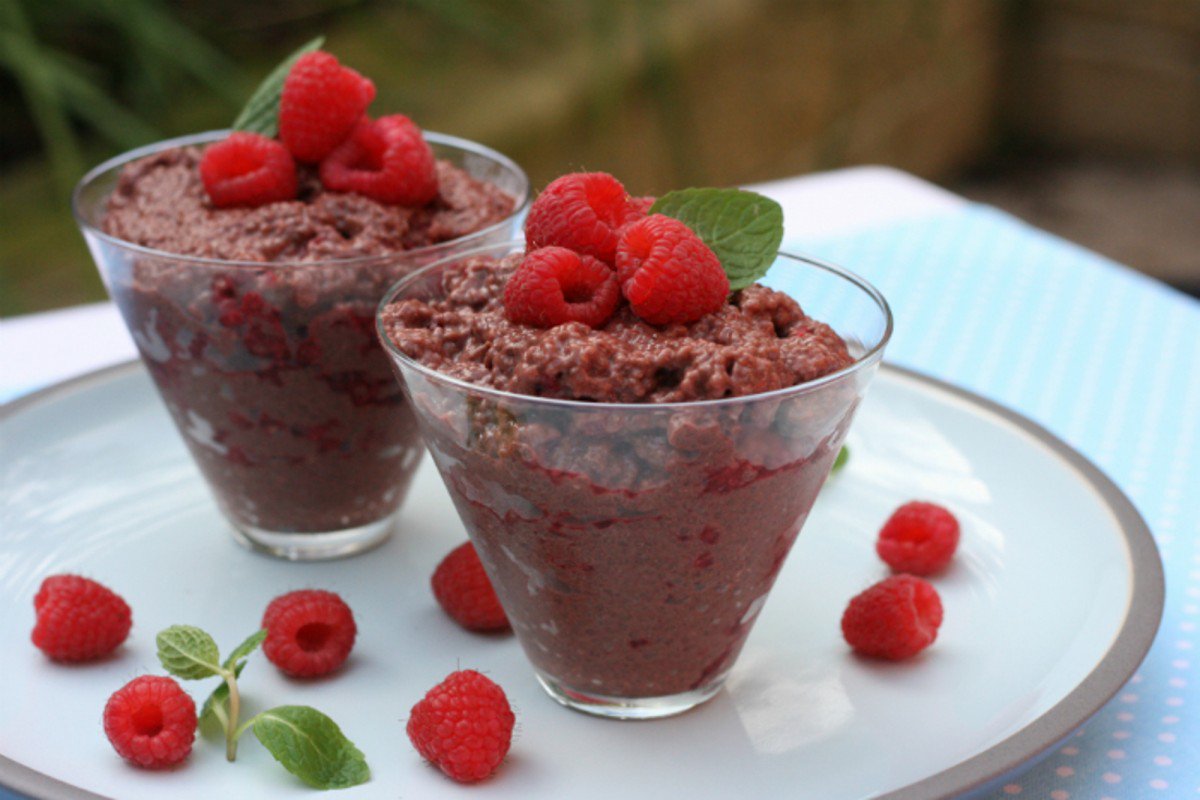 All we can say is: Amazing! This Nutrient-Dense Chocolate Raspberry Chia Pudding by Rachael Campbell is quick, easy, and also great for those busy weeks. Nourish your body, nurture your soul. 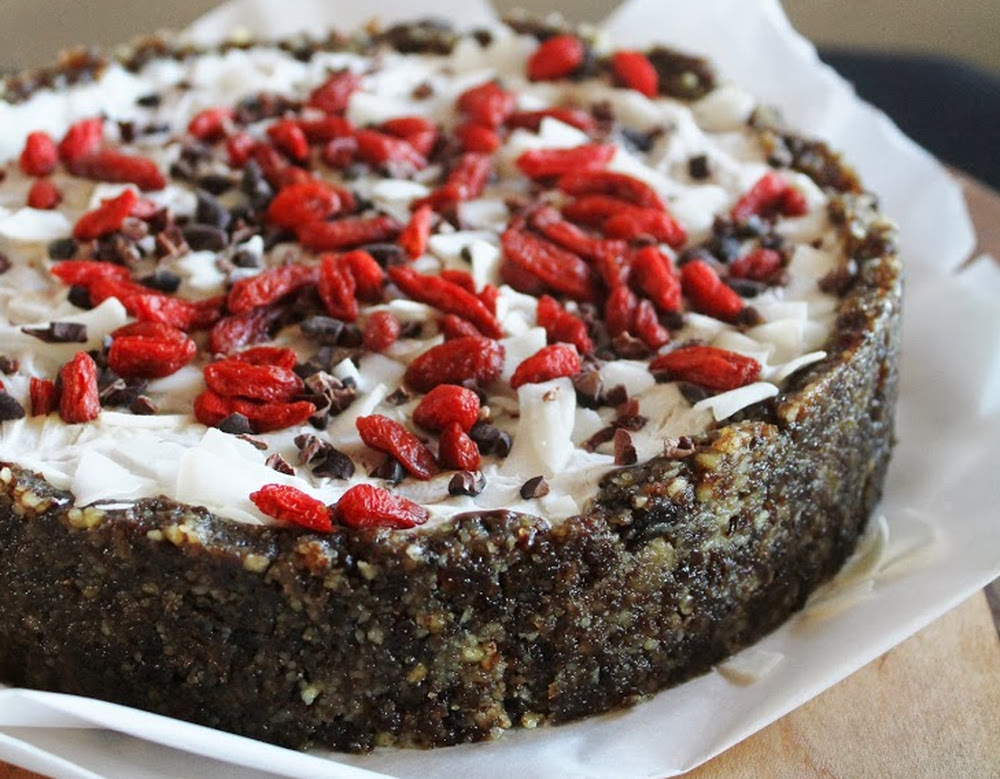 This Raw Vegan Chocolate Pudding Tart by Emily von Euw is perfect for any special occasion. Every chocolatey bite leaves a hint of coconut and a little explosion of goji berries in your mouth. It’s a great party pleaser. 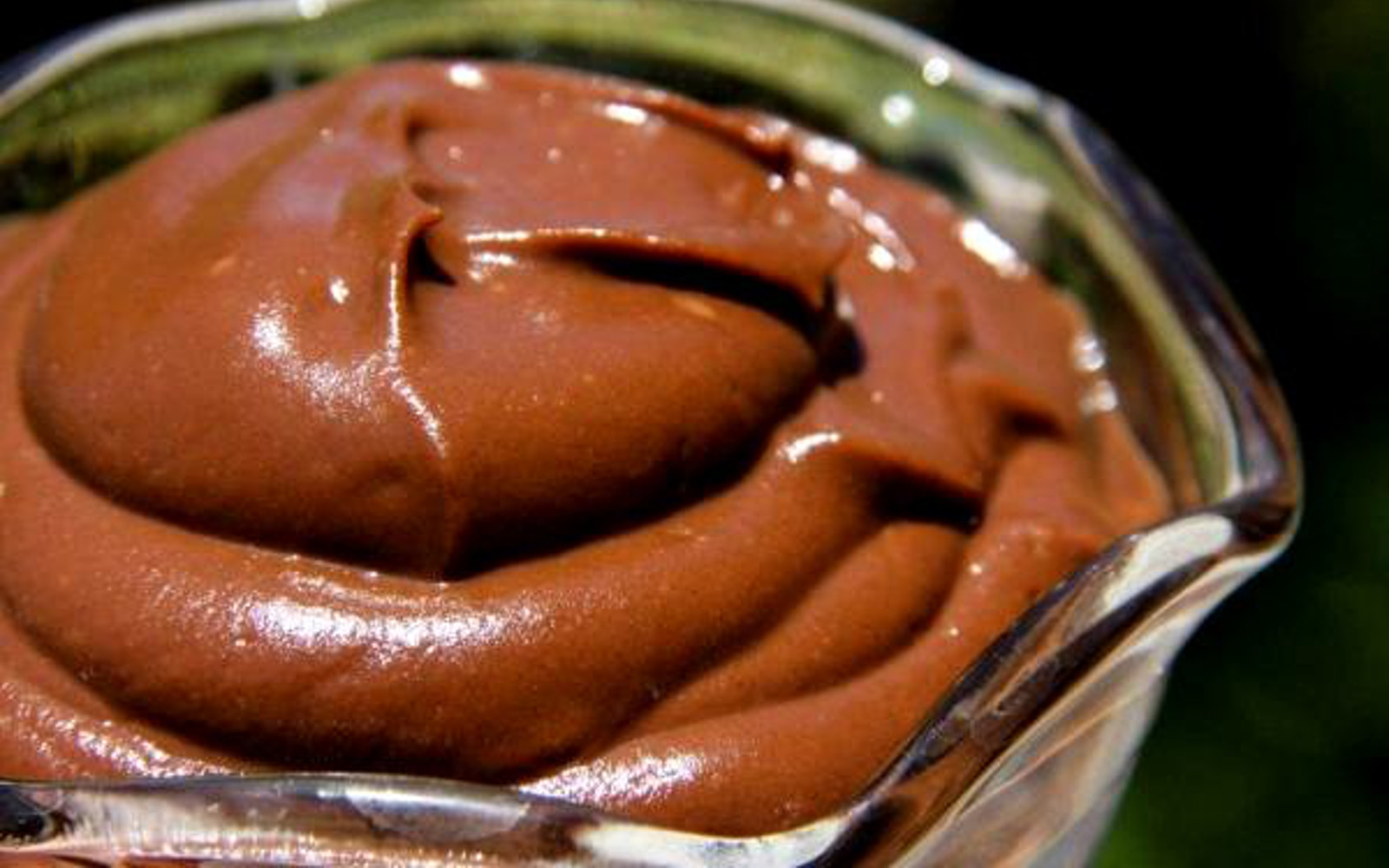 Life is a never-ending quest to satisfy our chocolate-tooth. The challenge is to do so healthfully. This Nearly Fat-Free Chocolate Pudding by Gretchen Tseng is creamy, chocolaty, and pretty darn healthy. It’s the best of both worlds! 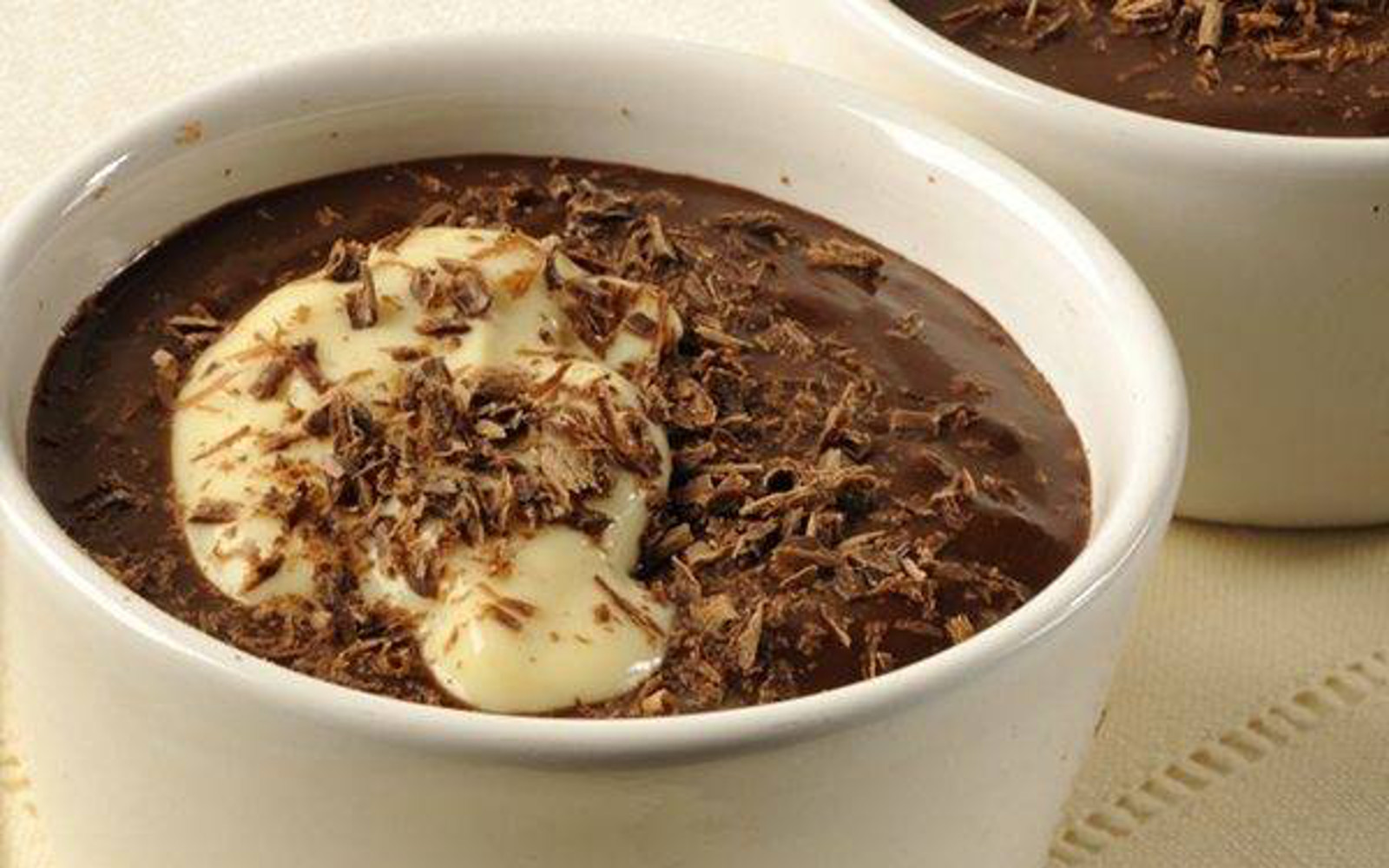 You may be amazed by how quick and easy it is to make this Satisfying Chocolate Pudding by Fran Constigan from scratch. Unsweetened cocoa powder plus a small amount of chocolate are used to make a pudding so satisfying––no one will ever guess it was made without dairy, eggs, or white sugar. 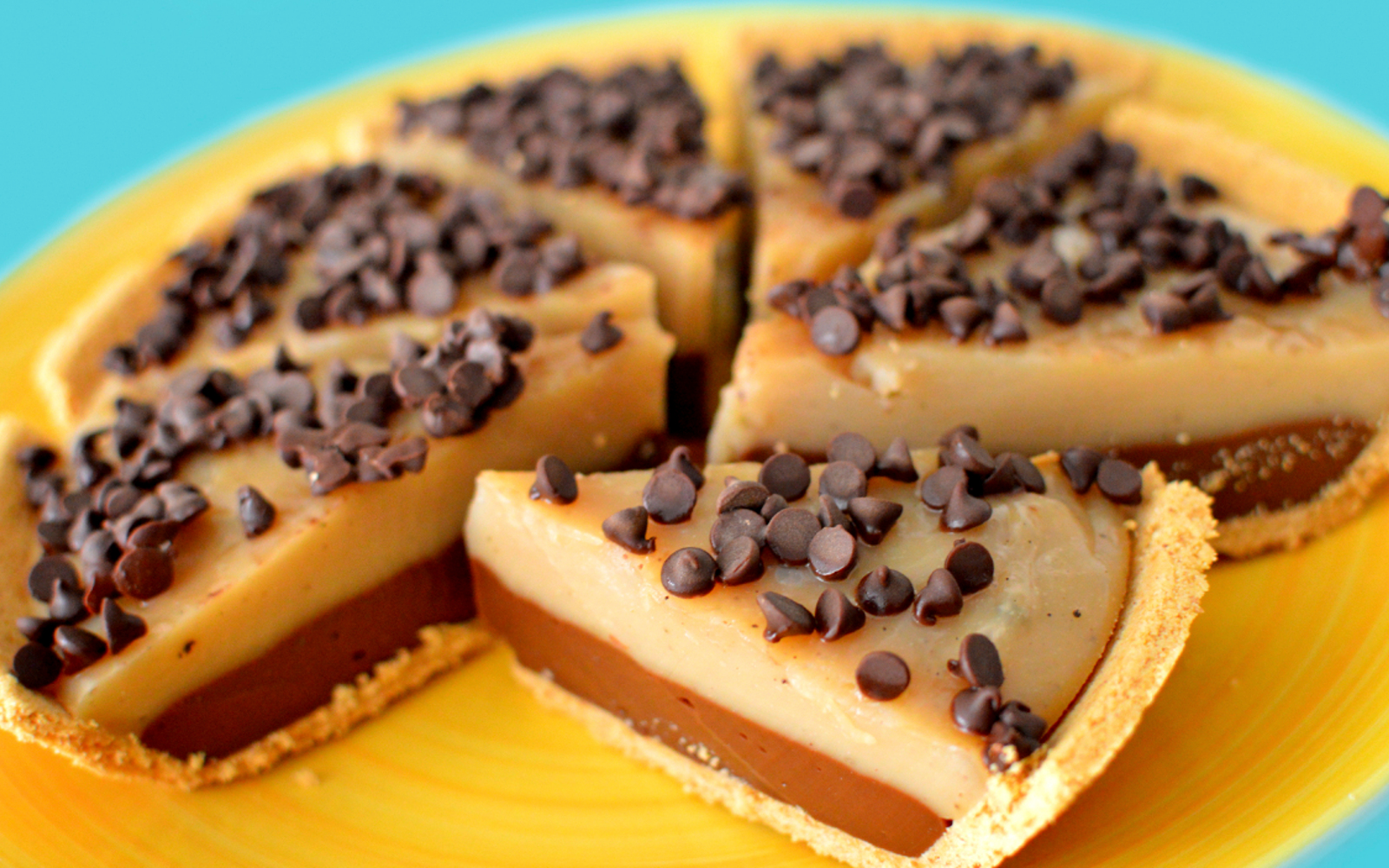 This Chocolate and Butterscotch Pudding Pie by Melanie Sorrentino is a perfect accompaniment to afternoon coffee or tea. Two thick and dense layers of pudding – chocolate and butterscotch – are set atop a simple, vegan crust. The top is dotted with chocolate chips for yummy bursts of chocolatey goodness throughout. Serve with some coconut whipped cream on the side for added decadence! 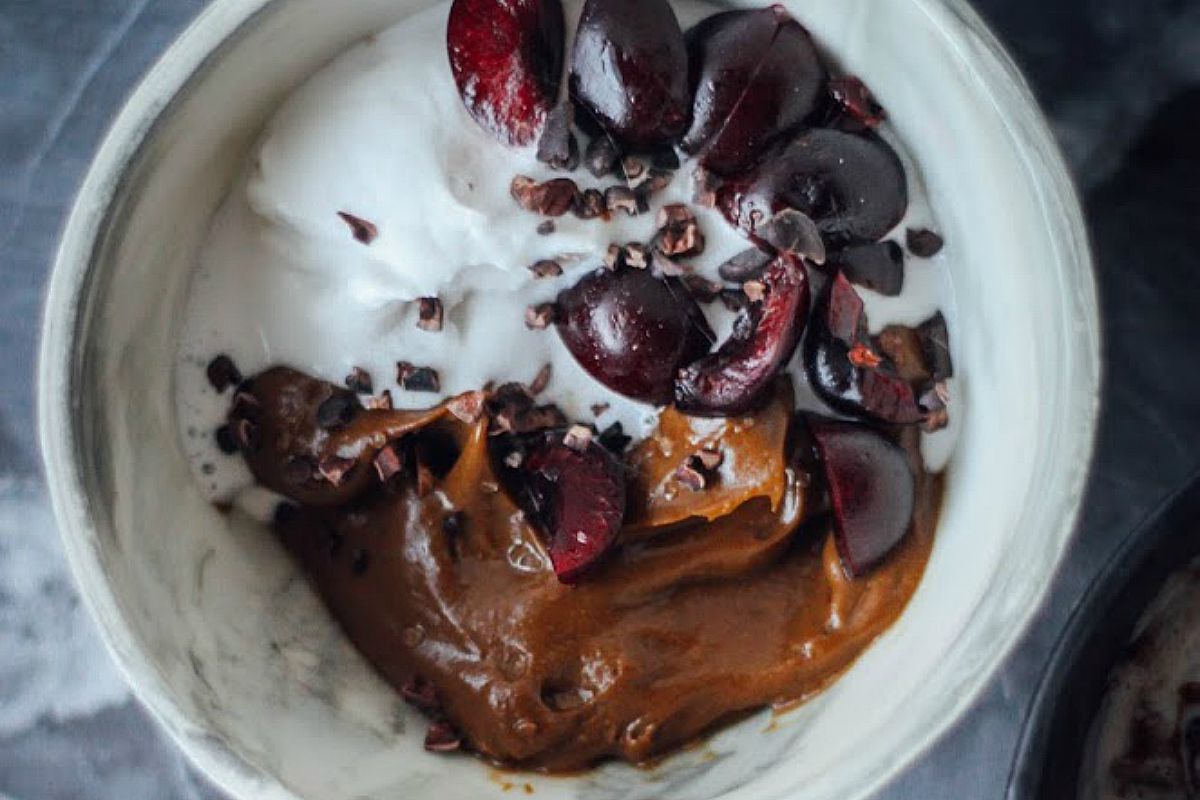 This Chocolate Pudding Bowl With Coconut Cream and Cherries by Emily von Euw is everything you want chocolate pudding to be and then a little bit more. It’s the perfect snack to satisfy a craving for sweets. 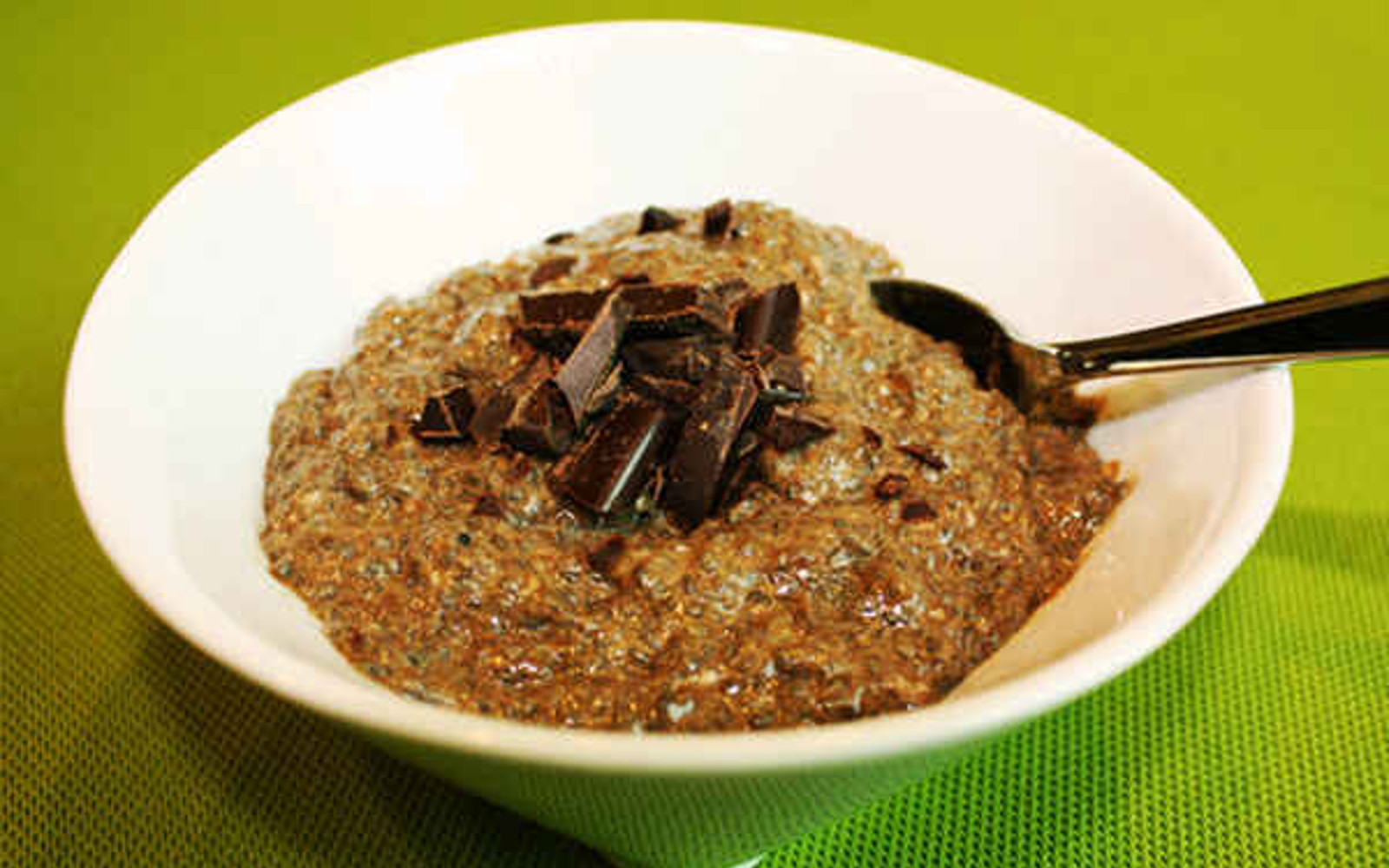 This Chocolate Chia Breakfast Pudding by Vega is high in plant-based Omega-3 essential fatty acids, containing high fiber and protein yield. With the addition a bit of chocolate and protein, this breakfast pudding recipe keeps your blood sugar balanced and is satisfyingly decadent. What a great way to start off your morning! 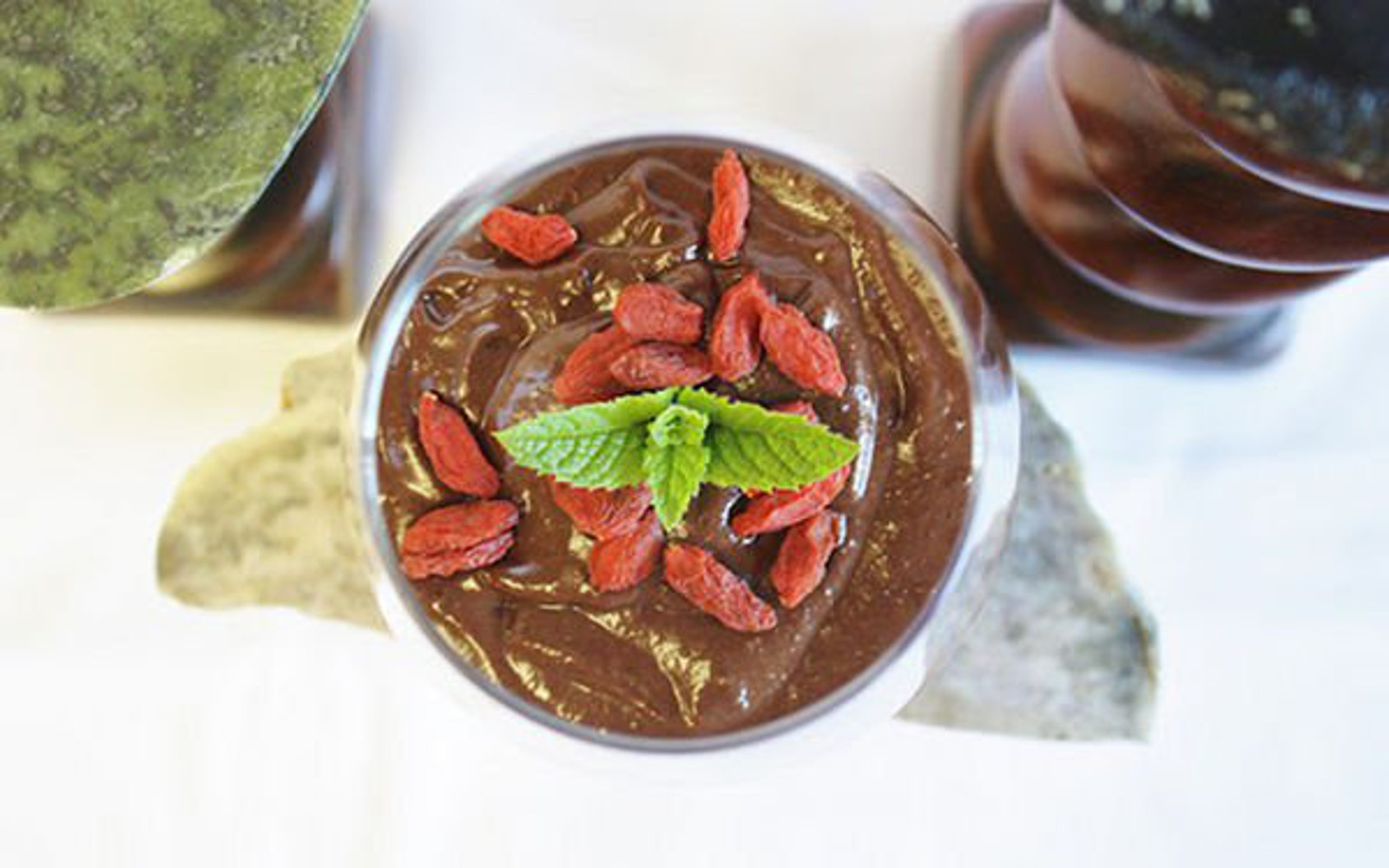 We have some questions for you: do you like bananas? Do you like chocolate? Do you like berries? Do you like delicious, health-giving food? Then you’re going to love this Raw Chocolate Berry Pudding by Emily von Euw! This pudding is full of whole foods, fruit and it’s cheaper than the stuff you would buy at the store. Plus, these healthy ingredients will give you a longer life, glowing skin, and optimal brain function. This delicious pudding is a no-brainer! 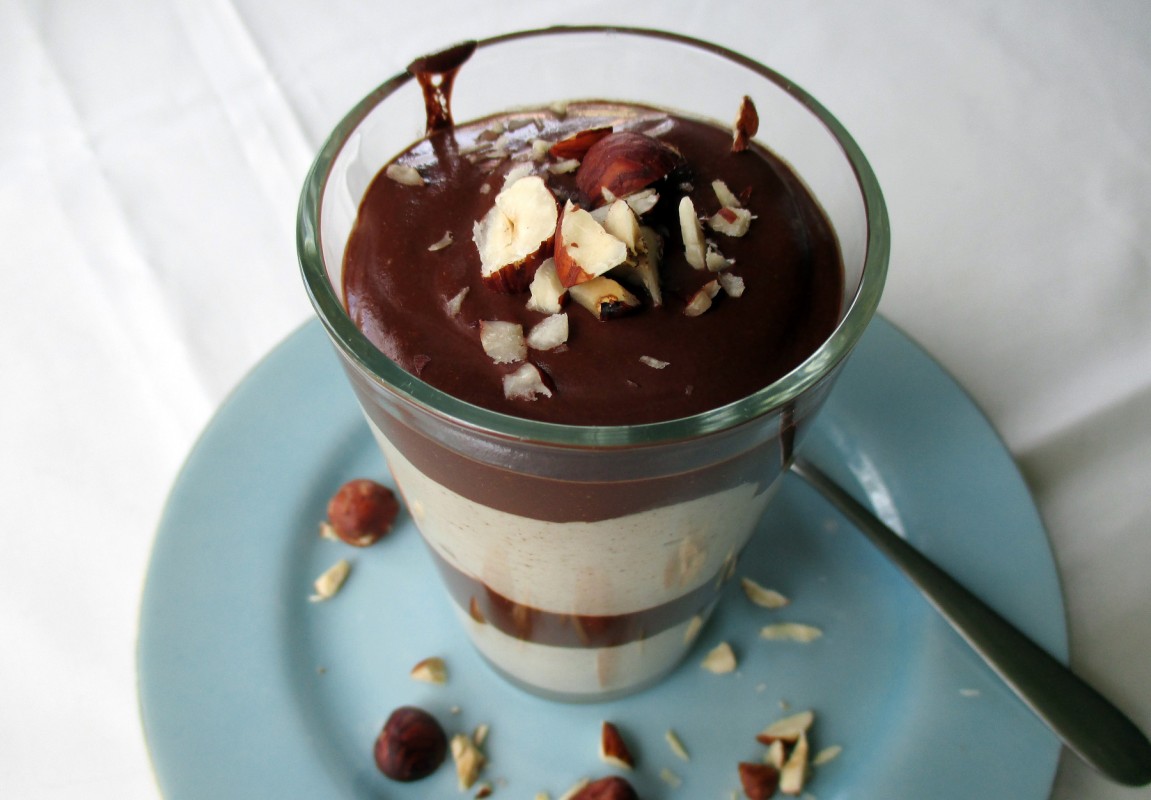 This super yummy hazelnut cream is combined with decadent chocolate pudding to make this Hazelnut Chocolate Parfait by Jana Kastner. It is a seriously delicious treat that is not only vegan, gluten-free, free of processed sugar, and starches but it also takes only five ingredients to make! 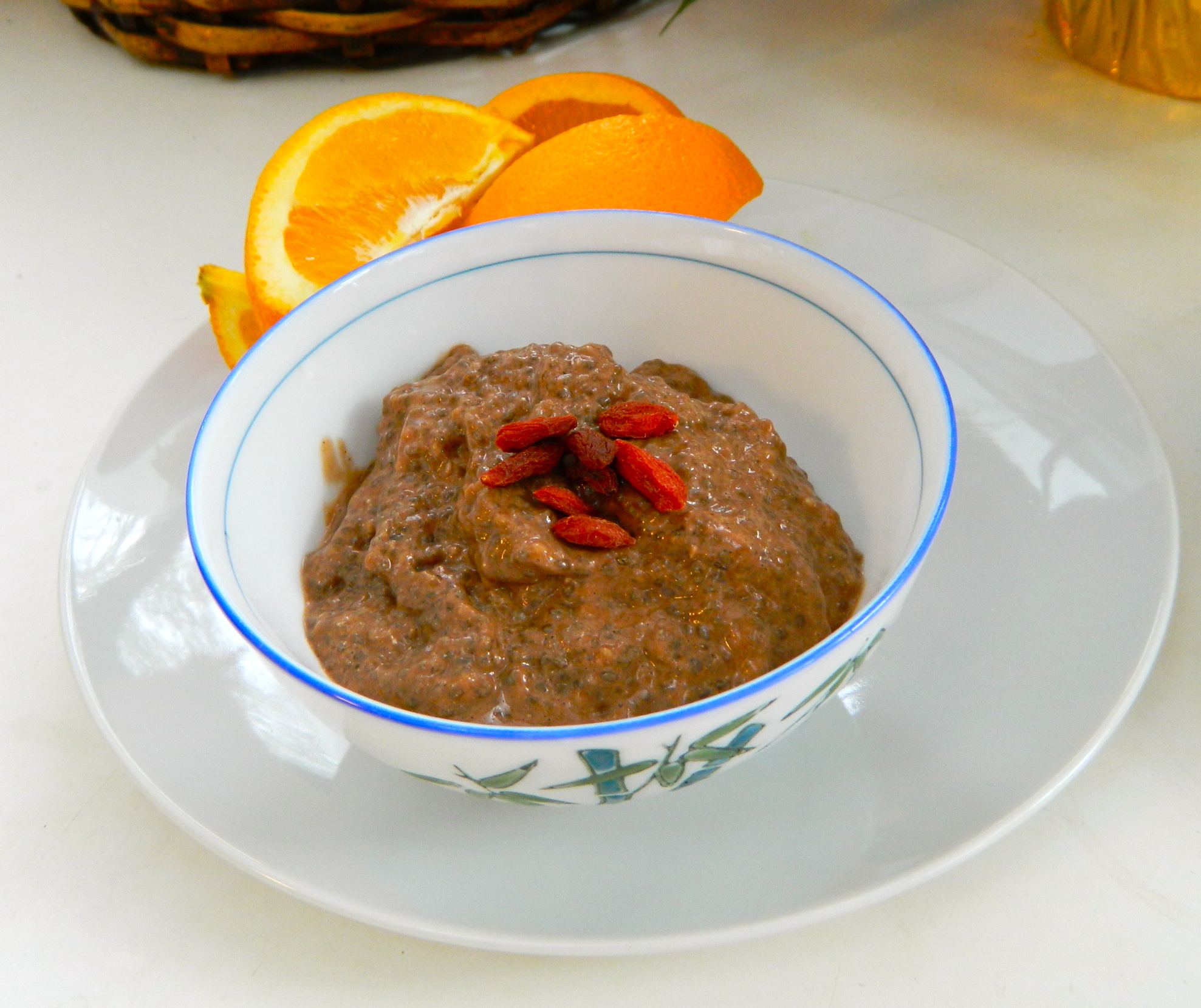 This Banana Chocolate Chia Pudding by Liz Moody is the best thing to start your day with because it’s so delicious. Plus, chia seeds are loaded with antioxidants, essential fatty acids (3 and 6), vitamins, minerals, and fiber. Chia seeds maintain blood sugar levels as they slow our bodies’ conversion of carbohydrates into simple sugars. They are great for an athletic person as they can effectively replenish minerals lost in sweat. Chia seeds can also help in weight loss as they swell up to 10 times their size, which prevents the absorption of some calories we eat. Chia puddings are great for breakfast as they will provide you with ample energy throughout the day. 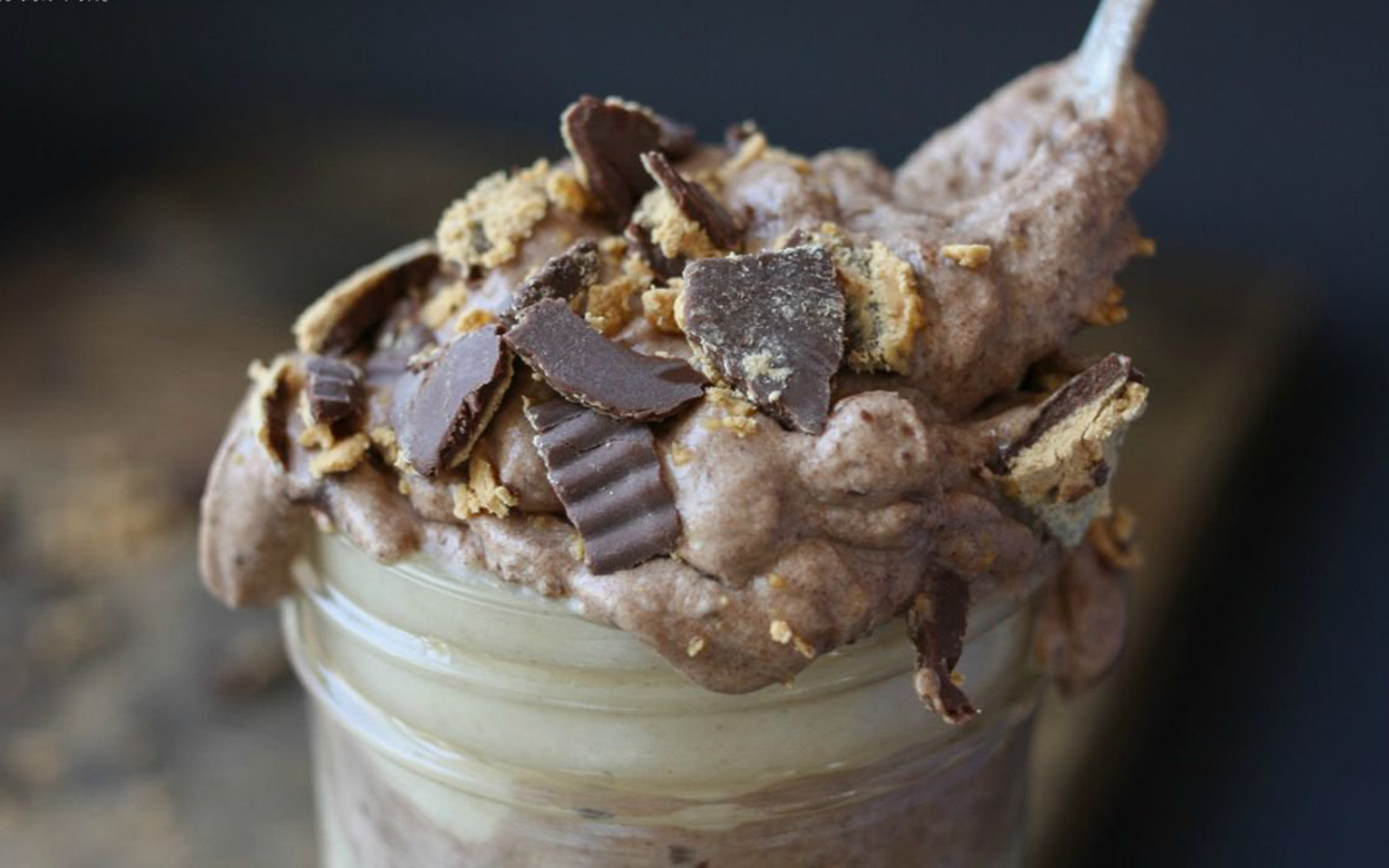 This Peanut Butter and Chocolate Cream Parfait by Sophia DeSantis looks incredibly rich, decadent, and delicious (which it is!), but don’t let that deter you if you’re trying to stick to healthier treats. Free of refined sugar, dairy, or any mysterious additives like so many other desserts out there, this parfait will satisfy your sweet tooth while treating your body a bit better in the process. 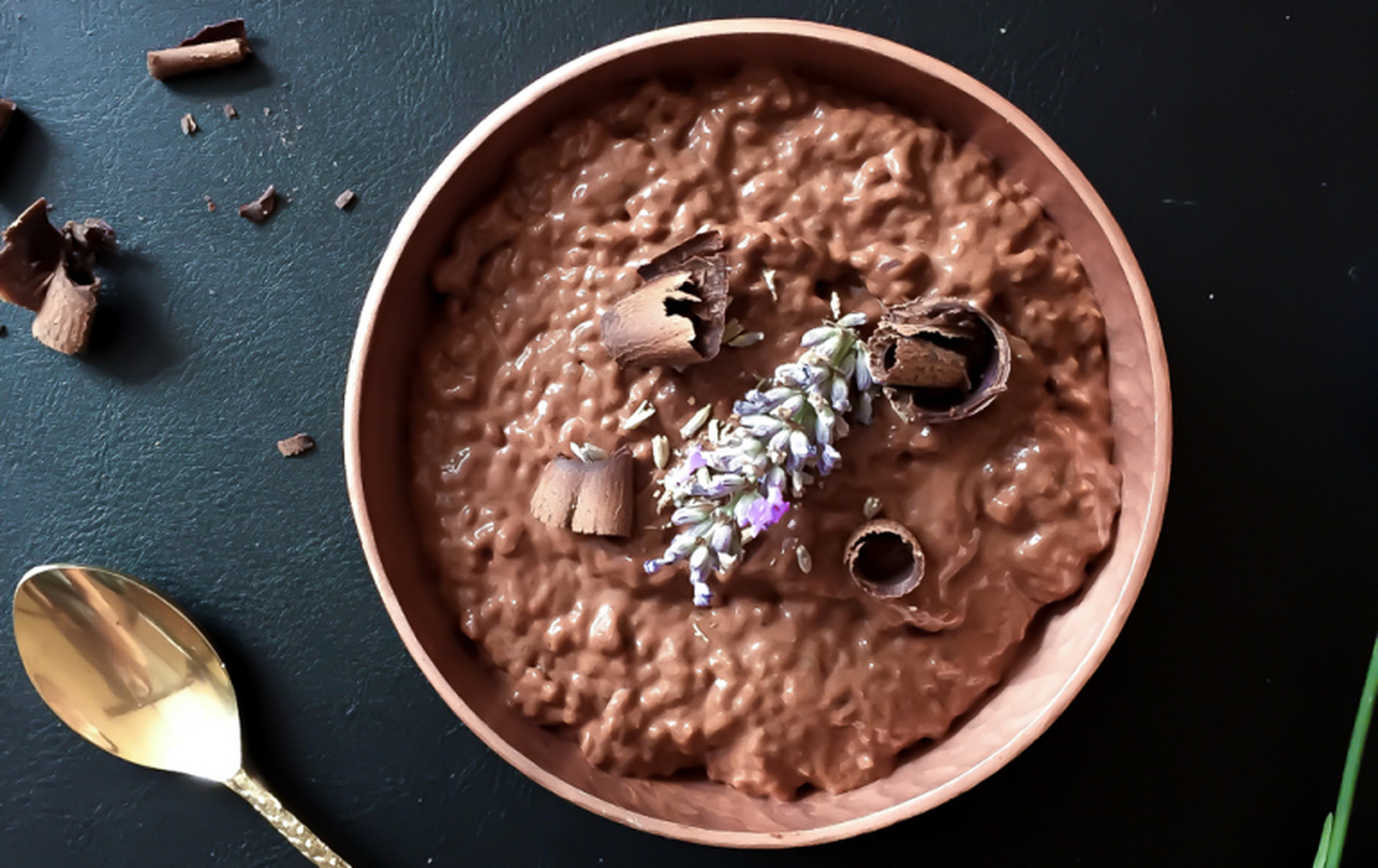 This Chocolate Lavender Chia Pudding recipe by Liz Moody brings the decadence of dessert to breakfast – it’s so rich, creamy, decadent, and dessert-like that it’s insane that it passes as a morning food, but it does! The best part is that you make the whole thing the night before, so in the morning, you can just grab it and go. This would also work wonderfully as a dessert – just blend it all together until smooth after the chia sets. 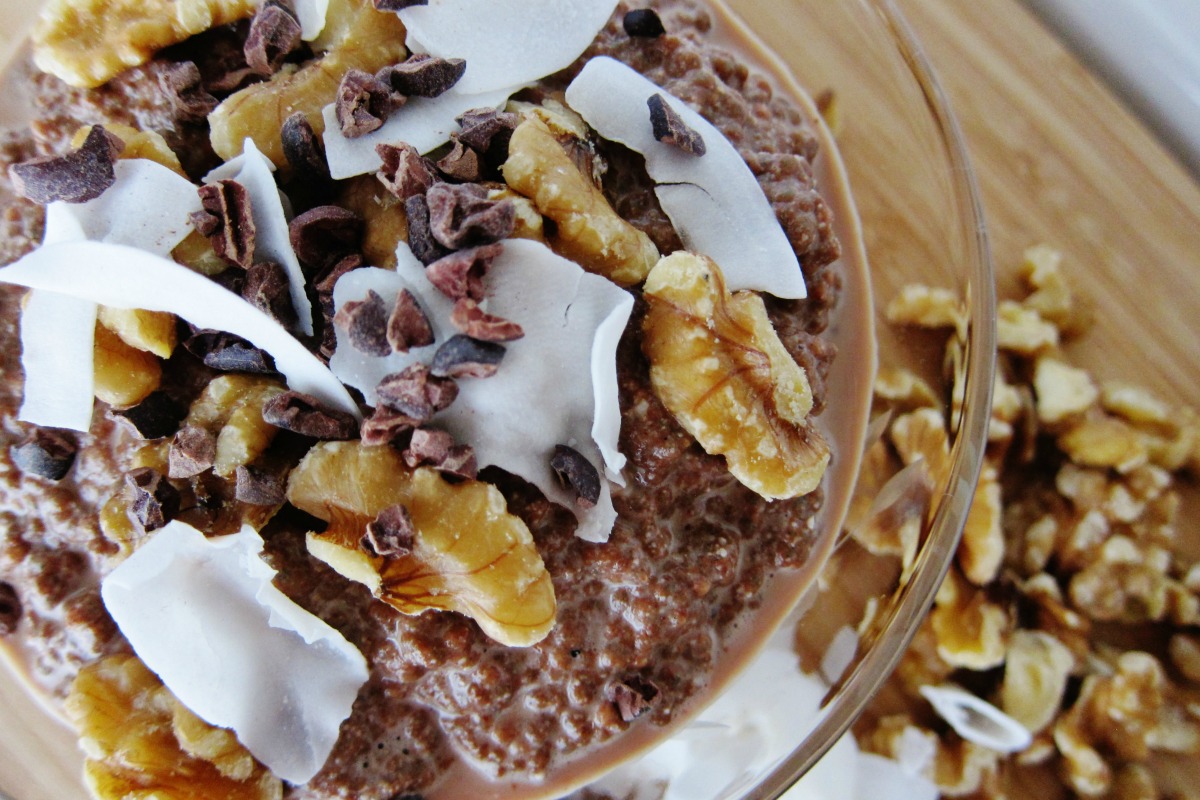 This German Chocolate Chia Porridge by Amy Lyons is like eating chocolate pudding for breakfast! Like chia seed porridge has something a little decadent and something that would be more exciting than your usual bland breakfast – German chocolate! The best part is it can be made the night before, so no rushing in the morning to prepare it!

Wow. Those recipes were really “pudding” it down – now it’s time to go and find some chocolate pudding.

If you need help hunting down the perfect recipe, download the Food Monster App and you’ll have over 8,000 recipes at your fingertips at all times. Stop dreaming about the perfect pudding and start making it!

We also highly recommend downloading the Food Monster App  — with over 15,000 delicious recipes it is the largest meatless, vegan, plant-based and allergy-friendly recipe resource to help you get healthy! And, don’t forget to check out our Popular Trends Archives! 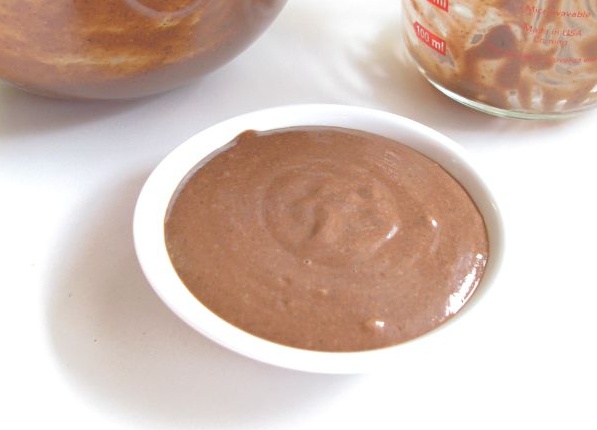 For those of you interested in eating more plant-based, we highly recommend downloading the Food Monster App — with over 15,000 delicious recipes. It is the largest plant-based recipe resource to help reduce your environmental footprint, save animals and get healthy! And, while you are at it, we encourage you to also learn about the environmental and health benefits of a plant-based diet.