Stay Balanced This Season With These 10 Warming Fall Spices 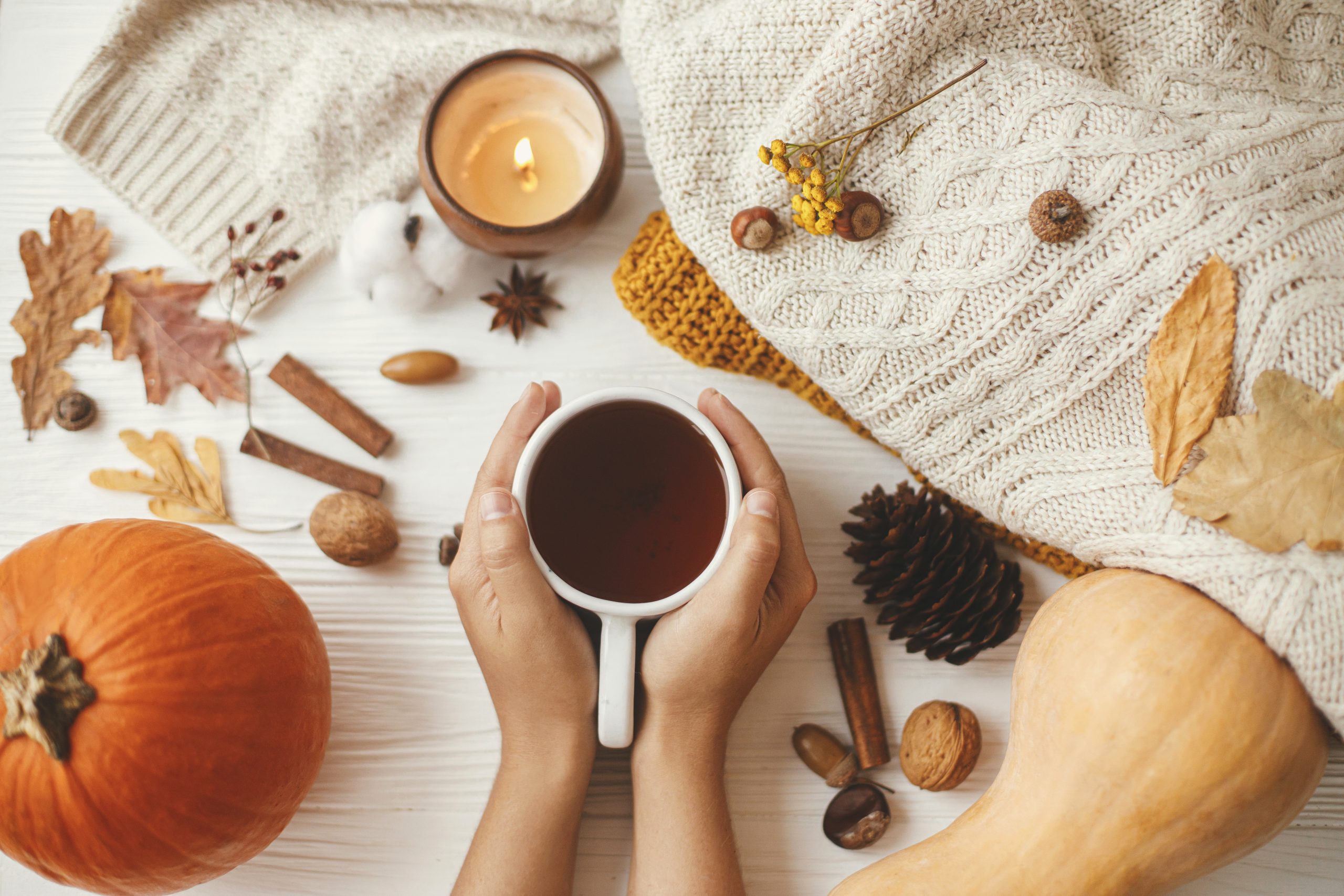 Have you ever heard of Ayurveda? Essentially, Ayurveda (which means “the science of life” in Sanskrit) is the 5000-year-old medical system of India, which offers a balanced approach to eating that is founded upon the belief that we are the result of not only what we eat but when, how and why we eat.

According to The Chopra Institute, basic Ayurvedic principles give us “guidelines on ideal daily and seasonal routines, diet and behavior” which “remind us that health is the balanced dynamic integration between environment, body, mind, and spirit.”

As the weather turns chillier in anticipation of fall, it’s important for us to adapt to the changing climate by choosing warming foods and spices that are in season and complement our needs, rather than disrupting our natural internal balance. Here are ten of our favorite warming fall spices, with some recipe suggestions from our Food Monster App to make sure you stay in balance, warm, cozy, and satisfied this fall season. 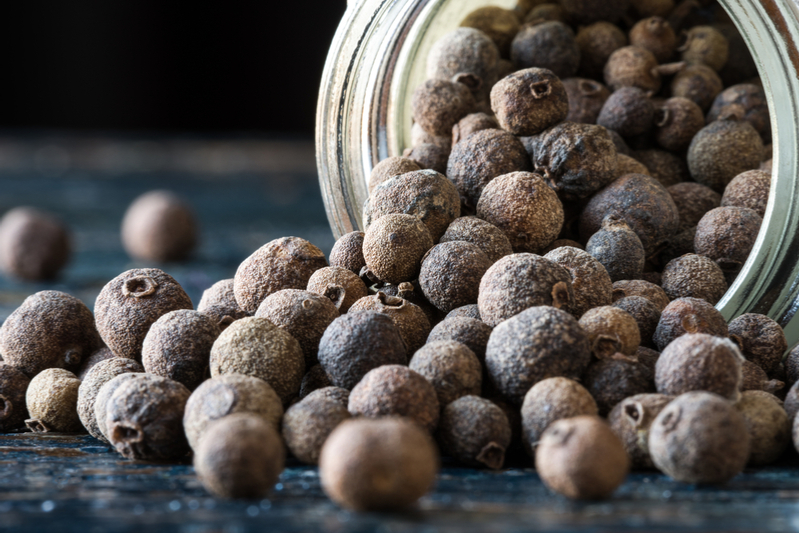 Allspice is a member of the pimento family and is often made from grinding the dried Pimenta dioica berries up, although it can be used in either its ground or whole berry form. Allspice is a mainstay spice in the Caribbean, Middle Eastern, and Latin American cuisines, and has a similar flavor to cinnamon, cloves, nutmeg, and pepper.

Studies have shown that allspice has the ability to lower inflammation and alleviate pain in parts of the body, and can also facilitate healthy digestion. Additionally, the high levels of vitamin C and vitamin A present in allspice contributes to its high antioxidant activity.

You could include allspice in delicious, stick-to-your-ribs savory recipes, like in this Jamaican Curried Tofu With Chickpeas, or you could throw some in for a warming and cozy sweet breakfast, like in this recipe for Healthier Cinnamon French Toast.

Cardamom is a member of the ginger family, and while it is native to India, it also grows in Sri Lanka, Guatemala, Indo-China, and Tanzania. Cardamom looks like a single, long seed (they grow between the sizes of a quarter-inch to three-quarters of an inch), but it is actually a seed pod. Its tiny black seeds are cased inside a pale, green, and papery outer layer. It is also one of the most expensive spices after saffron and vanilla.

Cardamom is a popular spice in Ayurvedic cooking, where it is considered an excellent digestive and effective for reducing bloating and intestinal gas. It is also rich in niacin, pyridoxine, riboflavin, thiamine, vitamin A, vitamin C, sodium, potassium, calcium, copper, iron, manganese, magnesium, phosphorous, and zinc.

Cardamom has a pungent flavor and a strong aroma, with hints of lemon, mint, and smoke, and can be used in a variety of savory and sweet dishes, as well as in beverages. For a sweet dessert, try cardamom out in these Maple Cardamom Vanilla Hazelnut Macaroons, or go the savory route and try adding a crushed cardamom seed or two into this Cauliflower Rice Biryani recipe. 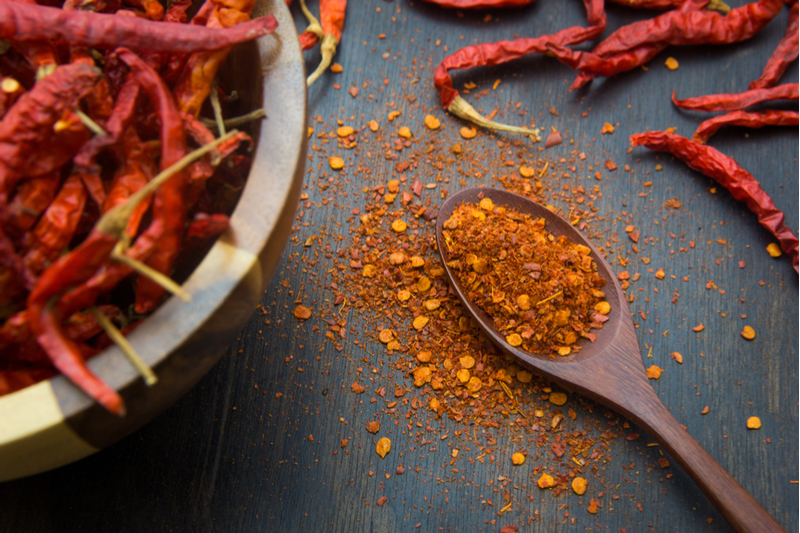 Cayenne pepper is a red and hot spice that has origins in South and Central America, the West Indies, and Mexico. Cayenne has an active ingredient called capsaicin that gives it its intense flavor and color, and may also act as a pain reliever.

Cayenne contains vitamin C, vitamin B6, vitamin E, potassium, manganese, and flavonoids, which makes it quite a powerful antioxidant. It also has cancer-fighting properties.

Get Cayenne’s full detox benefits by using it in a recipe like this Cleansing Detox Soup or even in this Smoked Cashew Cheese Spread — it will give your plant-based “cheese” a warming and spicy kick!

Cinnamon is a super popular spice, and for good reason. Not only is its sweet and woody aroma appetizing and warming, but its delicate spice profile tends to enhance the flavors of everything it comes into contact with.

Studies have shown that cinnamon has antibacterial and antifungal properties and is an effective, natural food preservative. It is used in Ayurvedic cooking to treat nausea, indigestion, colds, and other ailments, and works well in a variety of savory and sweet recipes.

We love how well it marries all the spices together in this recipe for Moroccan Sweet Potatoes and Chickpeas, and when we’re in the mood for something sweet and indulgent, this cinnamony Grilled Apple Pie with Vanilla-Coconut Whipped Cream never disappoints. And let’s be real: what is life without cinnamon rolls? These Turmeric Coconut Cacao Cinnamon Rolls combine several warming spices and are out-of-this-world delicious. 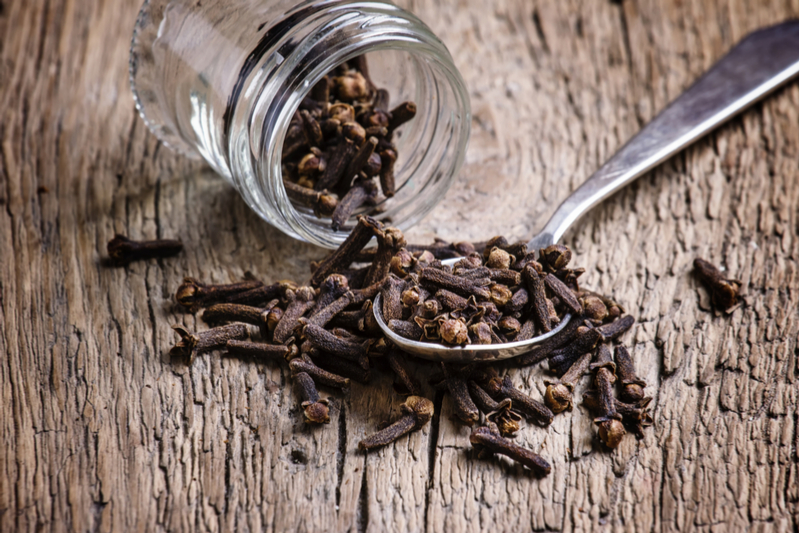 Native to Indonesia, cloves are the unopened flower buds of an evergreen tree in the myrtle family called Syzygium aromaticum. Sweet, warm, and aromatic, cloves have been used as warming herbal carminatives and as painkillers in traditions including Ayurveda, and herbalism practices.

Cloves contain a high level of eugenol, which makes you feel warmer because it increases blood circulation, and cloves are used in a wide assortment of different dishes: you can incorporate cloves in the preparation of marinades and barbecue sauces to help infuse proteins with flavor, or you could use them as a spice in soups, stews, and pies.

We think cloves pair beautifully in this recipe for Caponata: Eggplant Stew With Hummus, as well as this Simple Aromatic Pho, which is sure to warm you right up this fall. 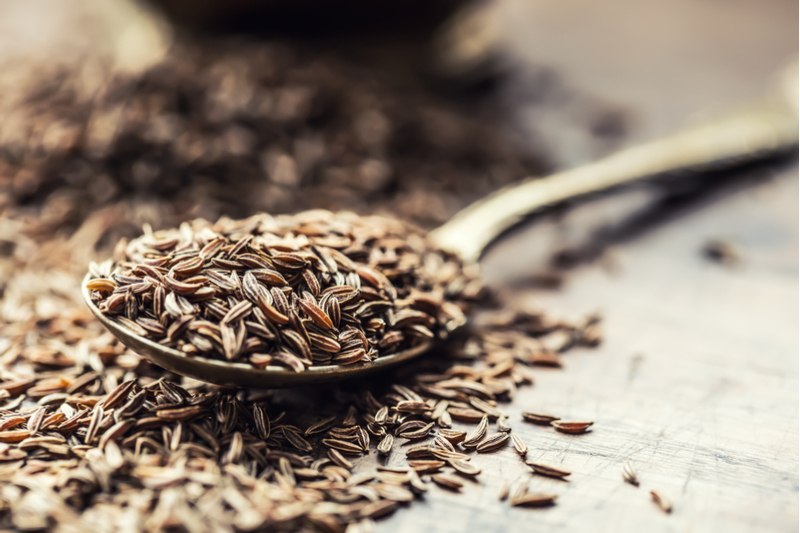 A cousin of parsley, cumin is a flowering plant that is native to the region of the eastern Mediterranean through to India and Pakistan. The second most popular spice in the world behind black pepper, as well as one of the oldest cultivated spices, cumin is an Ayurvedic spice that is also widely used in Mexican and Cuban cuisine.

Cumin aids in digestion, and helps your intestines absorb nutrients and minerals. Cumin has a very strong and aromatic smell and tastes slightly bitter on its own, but it provides a warm and earthy tone to the foods it interacts with, making cumin a great addition to stews, soups, and rice-based dishes.

Check out this recipe for Red Kuri Squash Soup With Cumin to get a taste of the healing spice, or try it in this Mexican-Spiced Tofu Scramble! 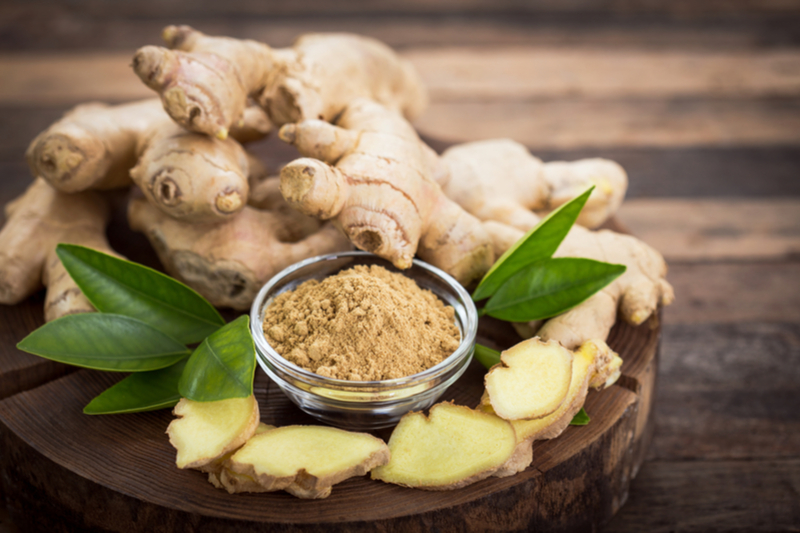 Ginger is a flowering plant that originated in China and is an extremely common spice that can be can be used fresh, dried, powdered, or as an oil or juice.

Ginger is well-known for helping to prevent you from feeling nauseated and has been shown to help treat indigestion, as well as to be effective against exercise-induced muscle pain. Ginger also can help with blood circulation. It’s a rhizome, so that makes it an easy root to grow from kitchen scraps.

Try enjoying ginger in these Raw Ginger Energy Bites or in this gluten-free recipe for Vegetable Laksa With Noodles. If you like ginger in desserts, don’t miss these Ginger Orange Whoopie Pies, either! 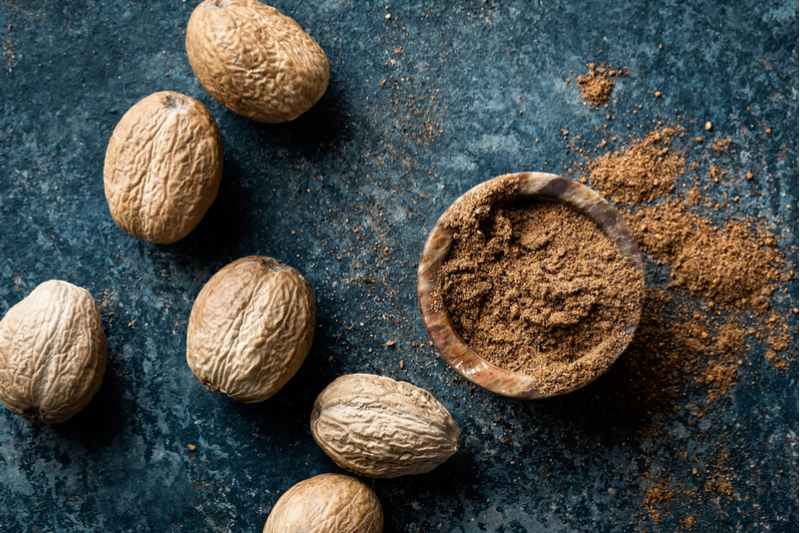 Used in Chinese and East Indian cultures as a flavor enhancer, an aphrodisiac, and a medicinal curative, nutmeg is a deeply aromatic spice that has been shown to have the ability to relieve pain, soothe indigestion, strengthen cognitive function, detoxify the body, boost skin health, increase immune system function, and improve blood circulation.

Nutmeg tastes slightly sweet, just like cinnamon, cloves, and allspice, but nutmeg is unique in that it can branch out and harmonize in a variety of different foods. Pair it with starchy potato dishes, infuse it into rich, dark liquor cocktails, sprinkle it on marinated leafy greens (yes, really; check out this recipe for Baked Spinach With Tofu Ricotta and Nutmeg Dip to see how it’s done), or use it to take your baked (and raw) goods to the next level, like in this Raw Chocolate and Nutmeg Biscotti — yum! 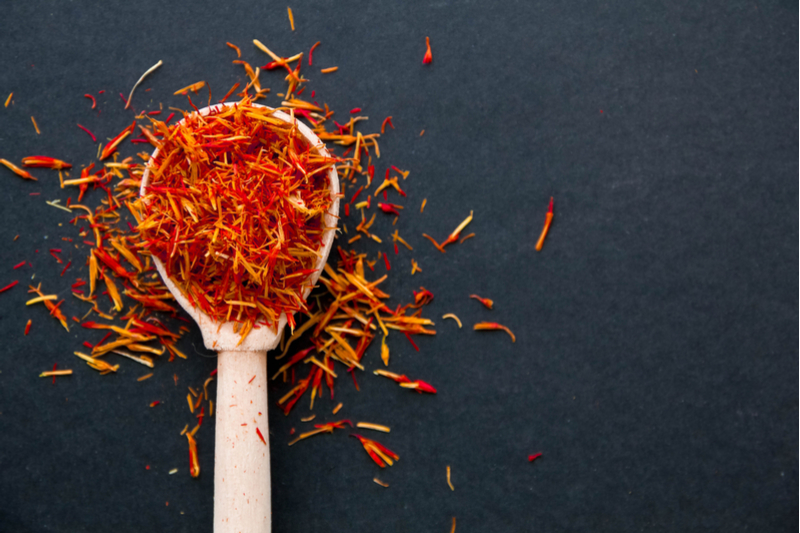 Did you know that at one point, saffron, a much-beloved spice commonly used in Moorish, Asian, and Mediterranean cuisine, was actually more expensive to buy than gold? Subtle and aromatic, just a small pinch of saffron can transform a one-note food into a smooth, distinct, slightly-floral, and pleasantly warming dish.

Studies have shown that saffron is a good source of manganese, vitamin B6, vitamin C, iron, and potassium. It also contains antioxidants such as crocin, a carotenoid that gives saffron its bright color. In traditional medicines, saffron has been used to treat depression, asthma, and cancer.

Use saffron to add a golden, enticing color and depth of flavor to your soups, like in this recipe for Saffron, Corn, and Bell Pepper Soup, or in a rice dish, like this Jackfruit Pulao.

Turmeric is an ancient spice native to South East Asia and is definitely experiencing its heyday in the mainstream culture right now. Known for its vibrant yellow hue, its aromatic scent, and warm, slightly bitter flavor, fresh turmeric will likely remind you of ginger, while dried turmeric is more woody and earthy.

We love incorporating turmeric in a host of savory and sweet dishes, as well as in healing beverages. Check out this recipe for a Liquid Gold Turmeric Latte if you want to drink your turmeric, or eat it on-the-go with this recipe for Raw Turmeric-Dusted Snack Balls. These Turmeric Falafels also make nourishing snacks.

If you’re interested in learning more about fall spices and spices in general, we recommend referencing this Ultimate Spice Guide for Vegan Cooking, as well as learning How to Stock Your Spice Cabinet for Delicious Vegan Cooking.