10 Tasty and Nutritious Spring Vegetables to Add to Your Cooking! 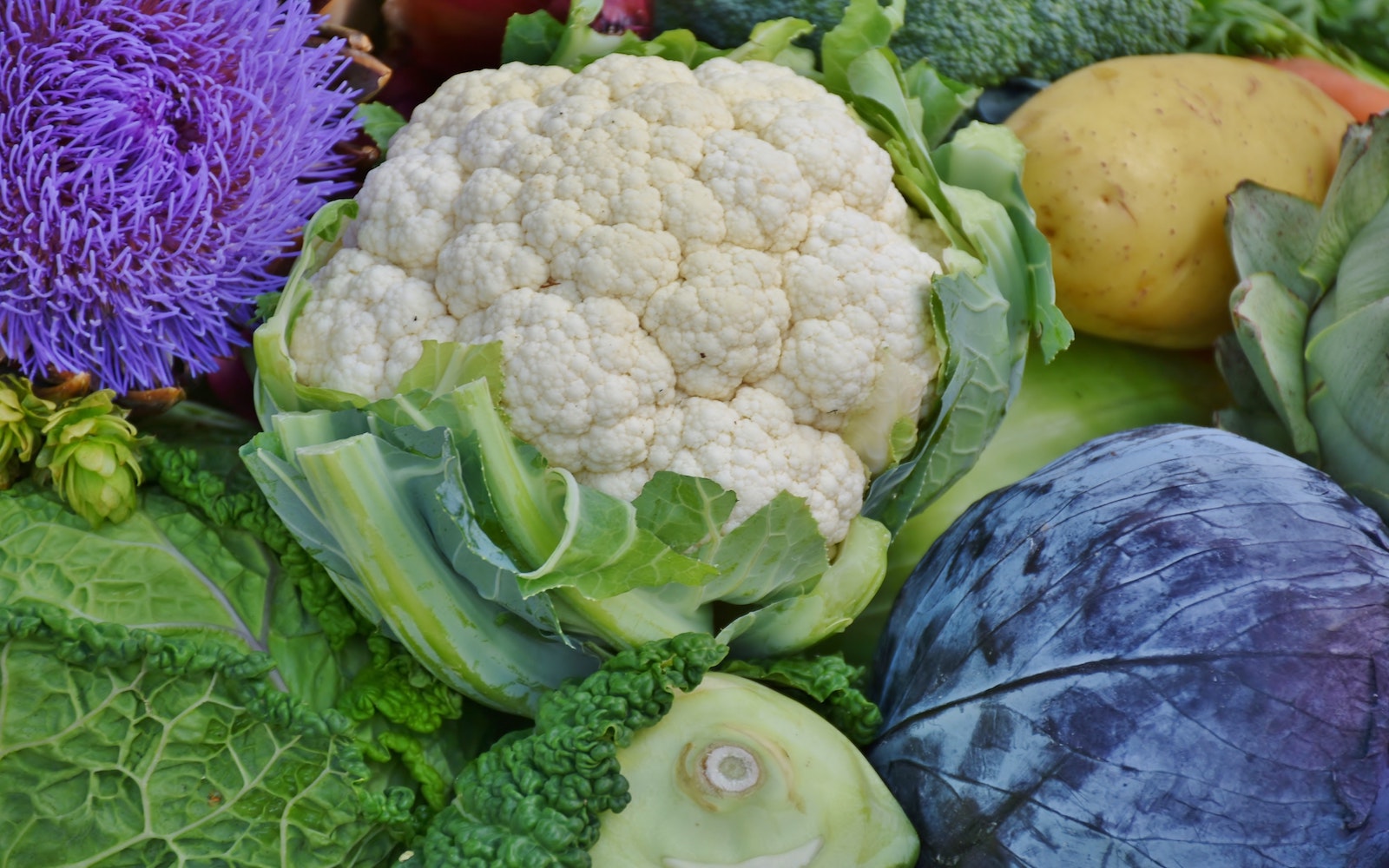 Spring is in the air, and so is a bounty of veggies that are just now coming into season, ripe for the picking. Here are 10 tasty spring veggies that should be a staple in your kitchen, as well as information on their health benefits, and several mouth-watering recipes that incorporate them in a variety of creative ways. So raise a glass (or fork) to spring, and get cooking!

We also highly recommend downloading the Food Monster App  — with over 15,000 delicious recipes it is the largest meatless, vegan, plant-based and allergy-friendly recipe resource to help you get healthy! And, don’t forget to check out our Seasonal Archives! 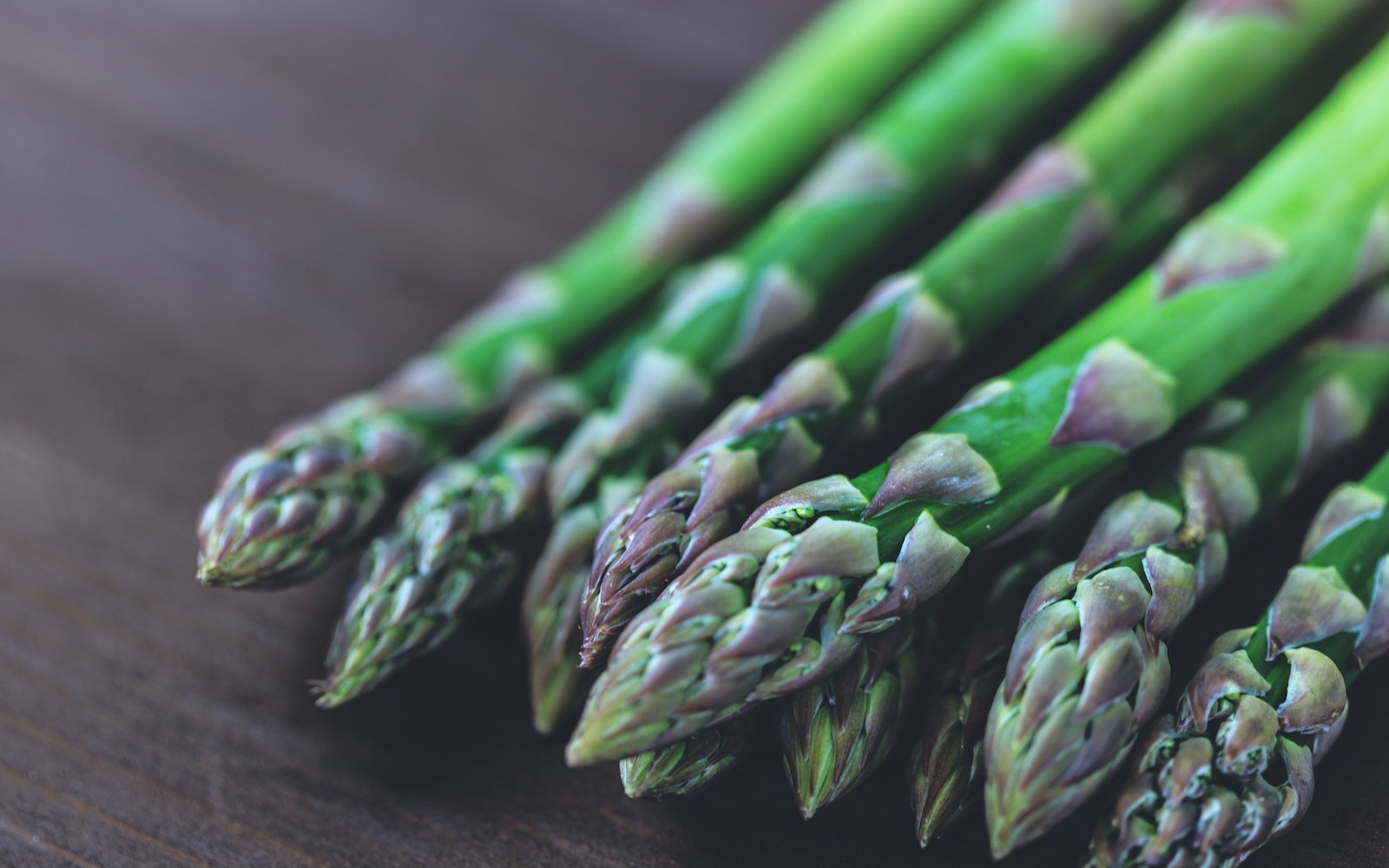 Asparagus which comes in green, white, and purple varieties, is a member of the Asparagaceae family and is related to both the lily and onion plants. In Ancient Greece, asparagus was believed to be an aphrodisiac, and was used to treat many ailments such as diarrhea. It also has diuretic properties and is a good source of vitamins A, C, and K.

Asparagus is delicious whether roasted, steamed, or sautéed–just make sure to cut off the tough bottoms of the stalks before cooking. For recipe ideas, check out this delectable Mushroom and Asparagus Risotto, or whip up a batch of Asparagus and Pepita Pesto. You could even combine two spring veggies (asparagus and radishes) with these delectable Roasted Radishes and Asparagus with Garlicky Chickpeas and Almond Cheese. 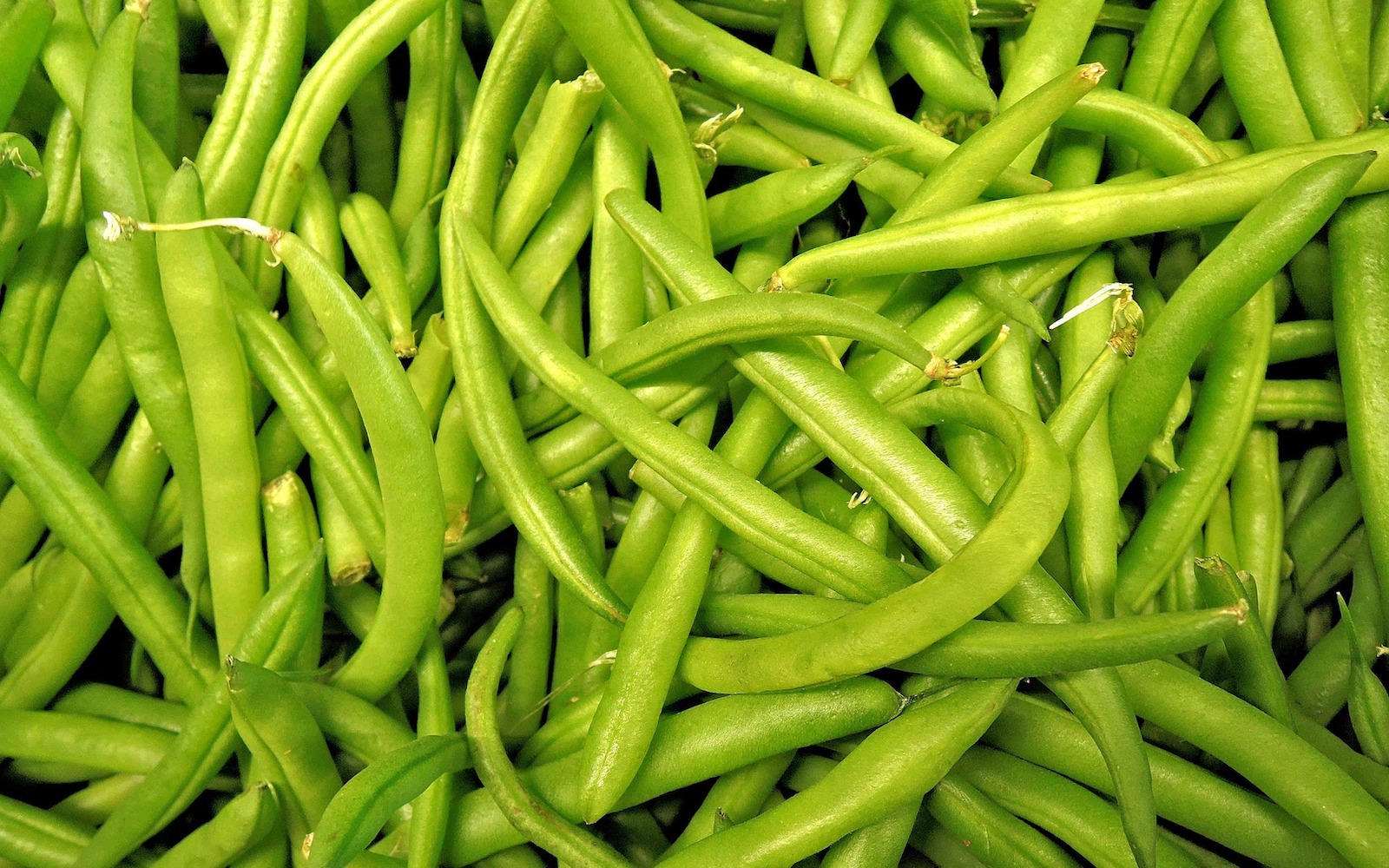 Green beans originated in Peru, have been grown in Mexico for thousands of years, and were eventually introduced to Europeans in the 16th century by Spanish explorers. They were frequently called “string beans” due to the long fiber running the length of the bean that was removed before consuming. However, in 1894 a man named Calvin Keeney introduced the “Burpee Stringless bean,” and nowadays, most green bean varieties sold in America are stringless.

Green beans are high in both protein and fiber, making them ideal for stabilizing blood sugar levels. Looking for some tasty green bean recipes? Check out these Turkish-Style Green Beans, or try some Green Beans with Orange Miso Sauce. Strings or no strings, these tasty green veggies are sure to put a spring in your step! 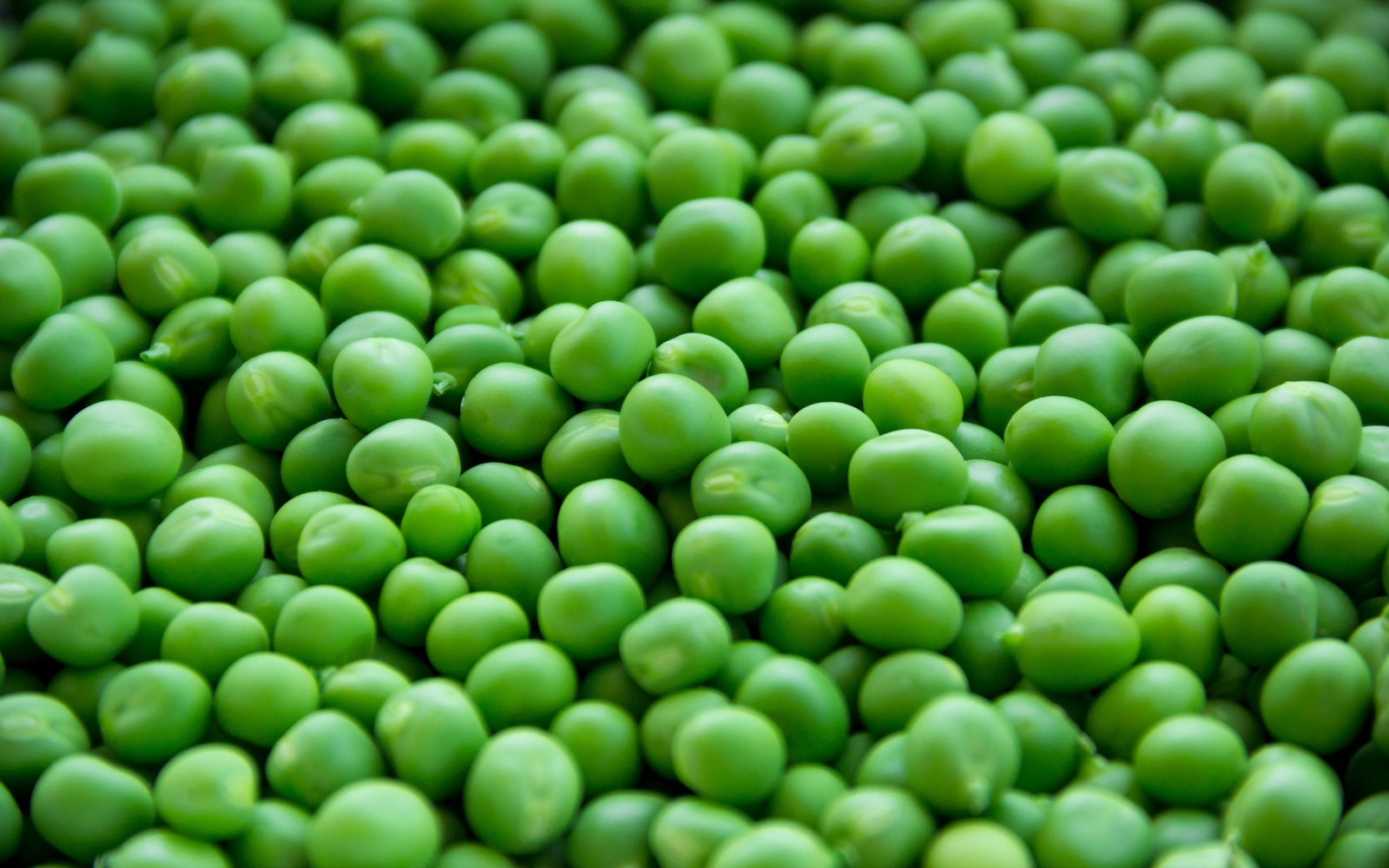 Peas were one of the first crops to be widely cultivated by humans, and are thought to have their origins in middle Asia and Egypt. Though we normally eat peas in their green form, they, in fact, turn yellow when fully ripe, after which they do, however, lose some of their sweetness. Peas are an excellent source of plant-based protein, with 8 grams per cup, and about the same amount of fiber. They may also help lower bad (LDL, or low density lipids) cholesterol and stabilize blood sugar levels.

For a light and tasty springtime meal, try out this Creamy Green Peas and Almond Soup, guaranteed to five you a new appreciation for this versatile veggie. You can also try out some Baked Rigatoni with Peas, or ditch the oven and make some Raw Carbonara Risotto with Green Peas. 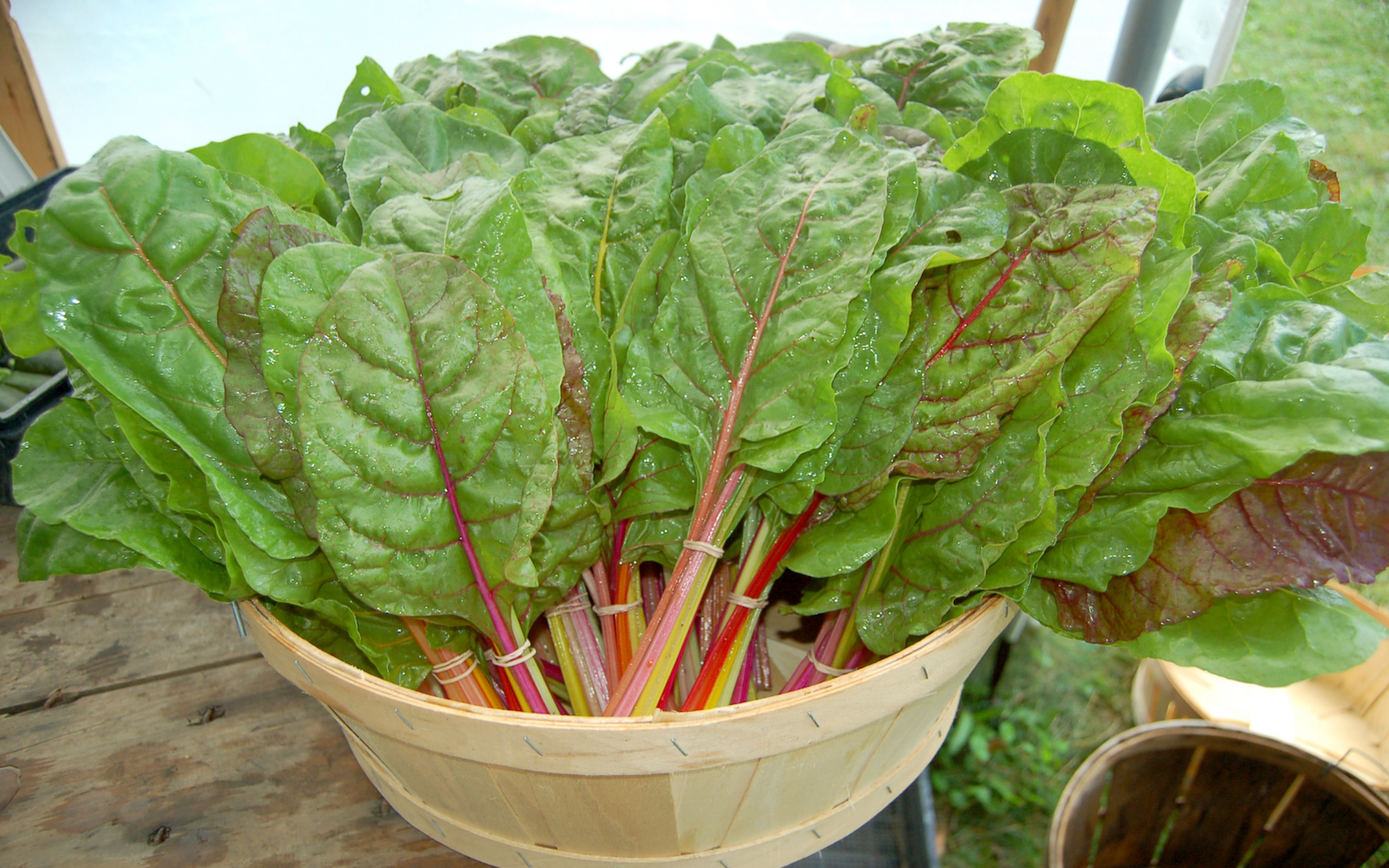 Oddly enough, despite its name, there’s nothing Swiss about Swiss chard–it actually originated in the Mediterranean region, not Switzerland, and may also called silverbeet, perpetual spinach, or even spinach beet. Talk about a plant of many titles! Regardless of the name, though, Swiss chard is a nutritional powerhouse and is packed with antioxidants, calcium, iron, vitamin K, and vitamin A, which is crucial for protecting good vision.

It can be eaten raw (throw some chard into your morning smoothie for an extra dose of nutrients) or cooked, and has a soft texture similar to that of spinach. Ready to get cooking? Try out this delicious (and eggless!) Swiss Chard Quiche with Wild Mushrooms, sure to be a crowd-pleasing potluck dish. Or whip up some Swiss Chard Lentil Quinoa Burgers, perfect for a spring or summer outdoor cookout. 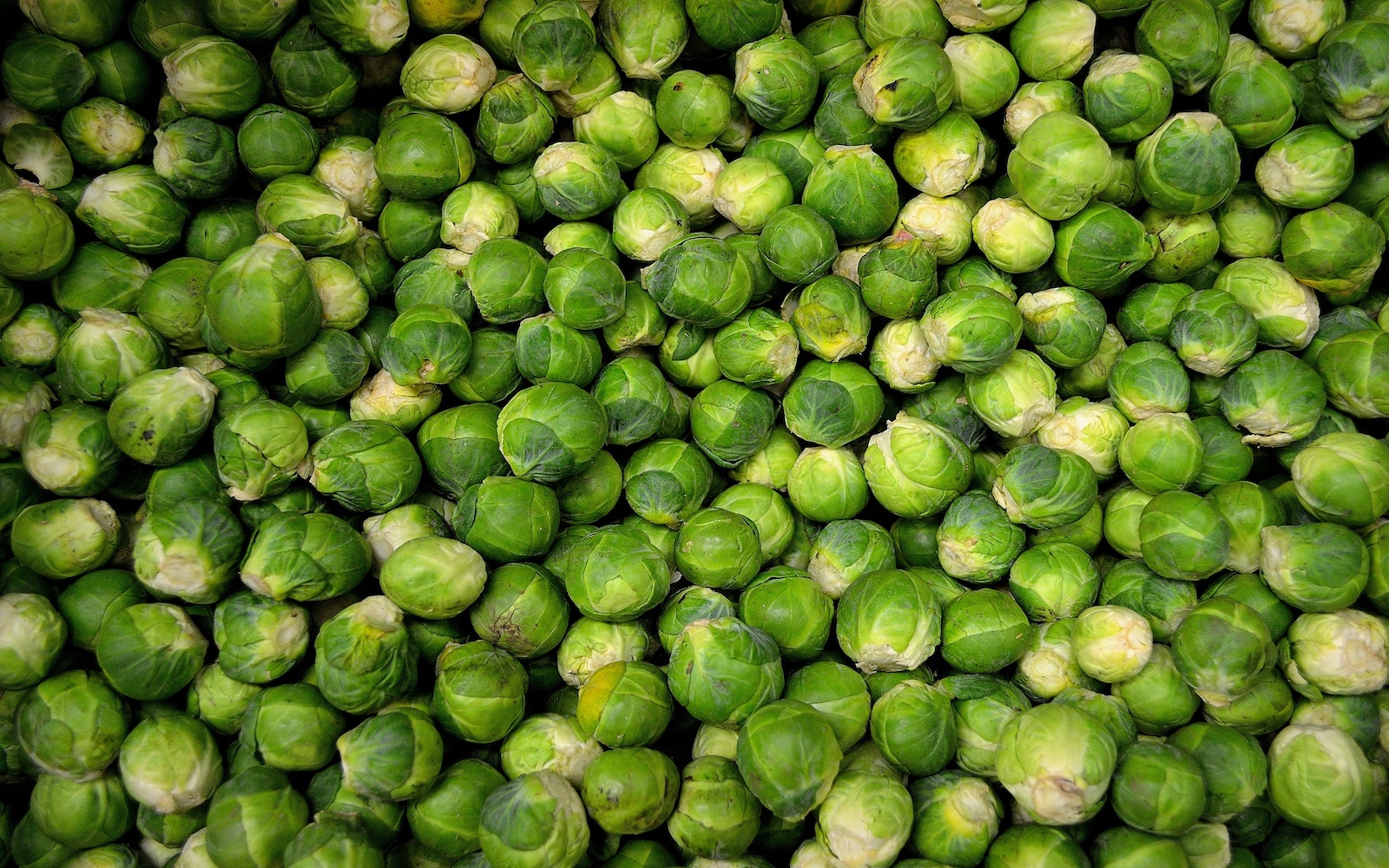 This cruciferous (means “cross-bearing” in Latin) vegetable has gained a bad reputation for being smelly and strongly flavored, but when cooked correctly (AKA not overcooked!), it can be a delightful addition to your kitchen. The exact origin of Brussels sprouts is still somewhat of a mystery, though they were named after the city in Belgium where they were first produced in mass quantities in the 16th century. The reason for their stinky reputation is because when cooked for too long, the breakdown of the chemical sinigrin produces a sulfur-like flavor and odor.

However, Brussels sprouts are packed with vitamin C and antioxidants, as well as being low in calories. Whether you’re working to overcome a childhood prejudice, or if you’re already in love with this much-maligned veggie, these BBQ Brussels Sprouts are a must-try recipe, bursting with sweet and smoky flavors. Or, for a quick and simple dinner, cook up some Brussels Sprouts and Pepper Pasta. 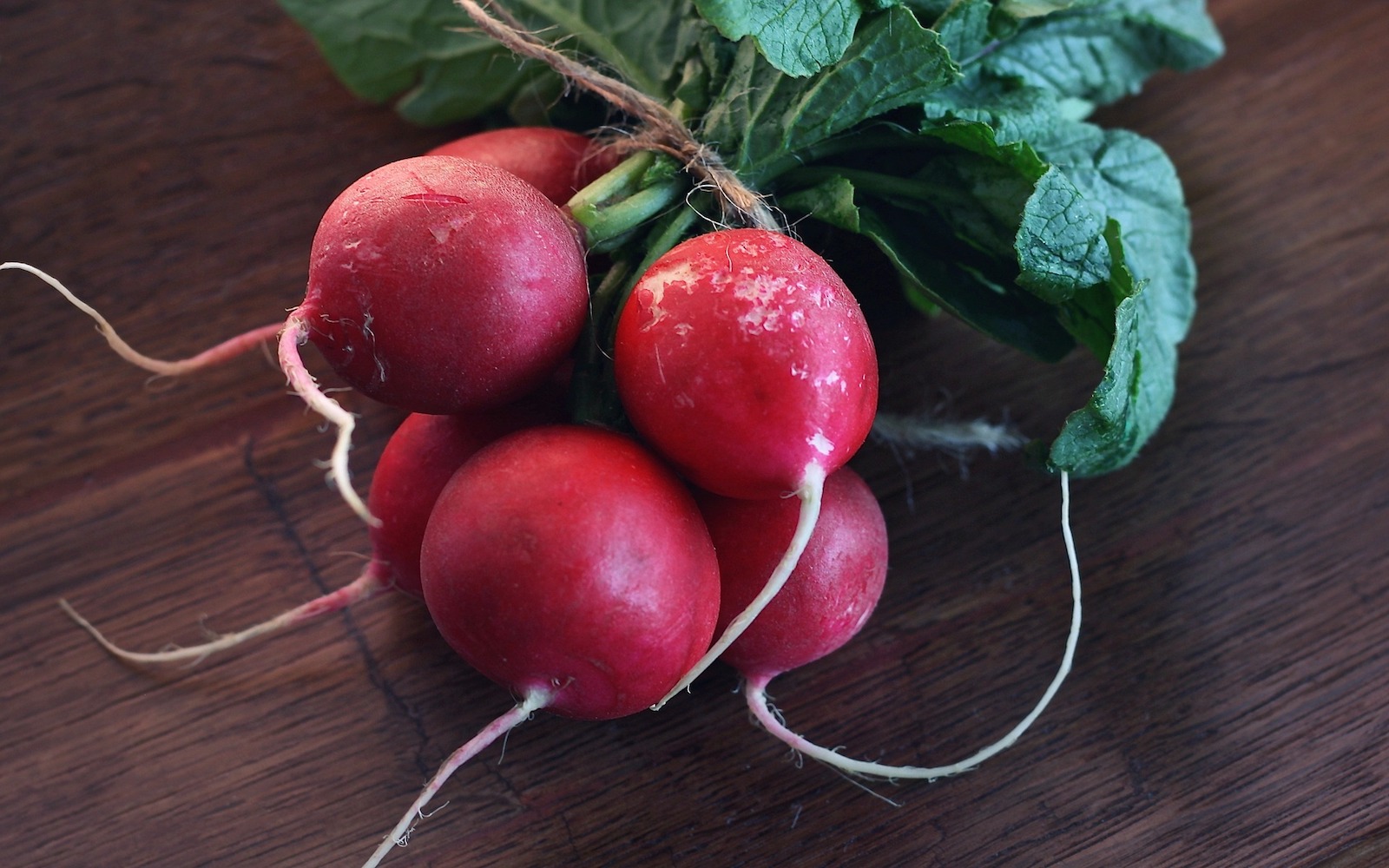 Crunchy, brightly colored, and packed with all the flavors of spring, radishes are thought to have originated in China, though they were also widely consumed in Ancient Greece and Egypt. In fact, the workers who built the Egyptian pyramids were paid in radishes instead of money! The word radish comes from the Latin word “radix,” which means “root,” referring to its classification as a root vegetable in the Brassicaceae family. Though we are most familiar with the small red radishes typically seen in grocery stores, there are numerous types of radishes: Daikon radishes, black radishes, watermelon radishes, and more! Radishes are an excellent source of vitamin C, and have an overall cleansing effect on the liver and stomach.

In order to preserve these tasty veggies, make some Spicy Pickled Radishes and enjoy them year-round as a condiment or just straight out of the jar. For a unique soup recipe, try out this Tarragon Green Pea Bisque with Pan-Fried Shunkyo Radishes. 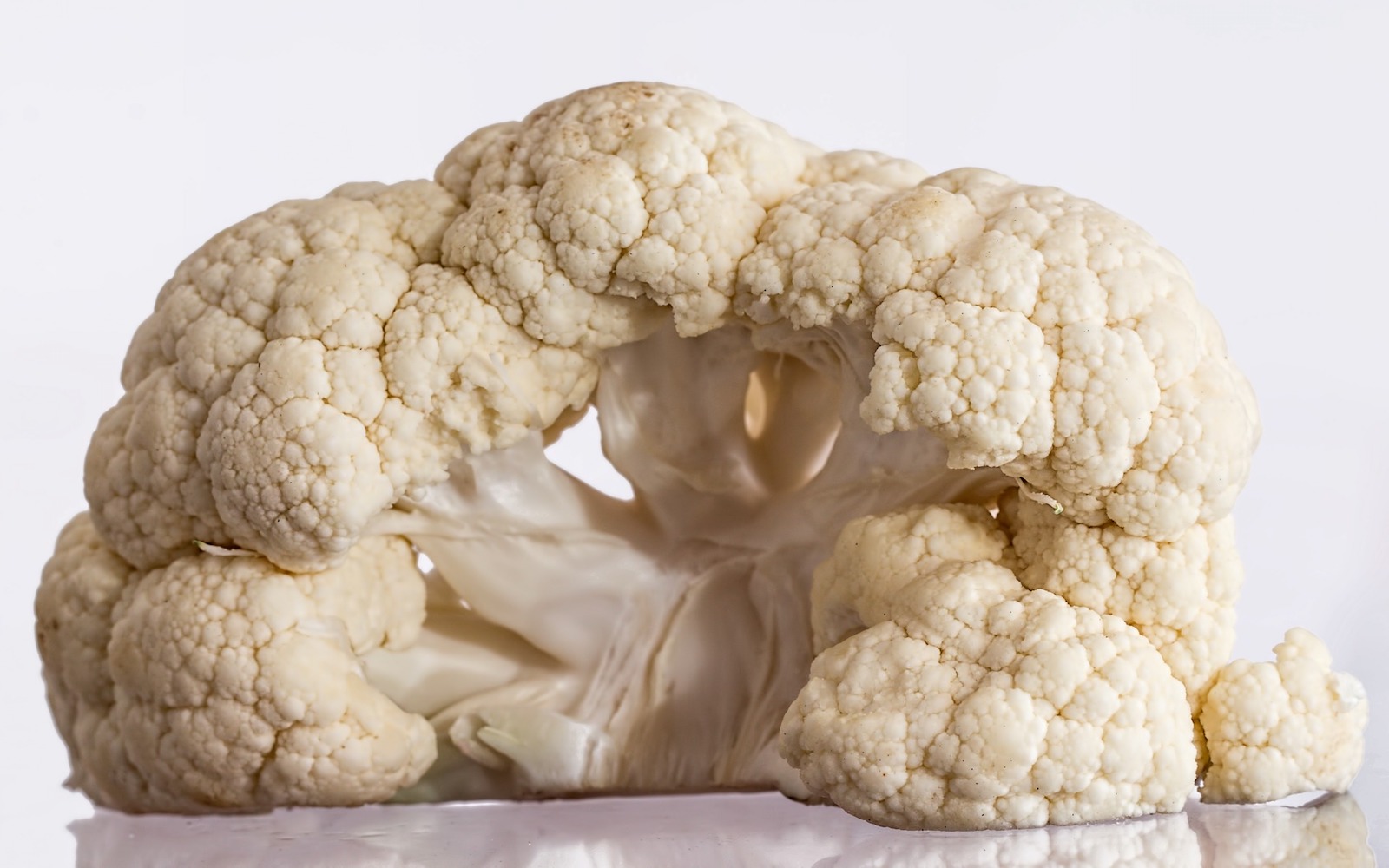 Cauliflower, in the same family as broccoli and Brussels sprouts, is thought to have its origins in the Middle East, and its name comes from the Latin words for “cabbage” and “flower.” It comes in several colors other than white, depending on the levels of chlorophyll present: orange, purple, and green varieties are all sold in certain grocery stores. Cauliflower is high in vitamin C, and is also a good source of fiber and choline, a B vitamin that aids in brain development.

If you’re looking for some unique cauliflower-inspired recipes, check out these Buffalo Cauliflower Bites, which can be baked or fried depending on your preference. Or, for a tasty dinner idea, whip up a batch of Roasted Cauliflower Tikka Masala, filled with delicious spices and brimming with antioxidants. 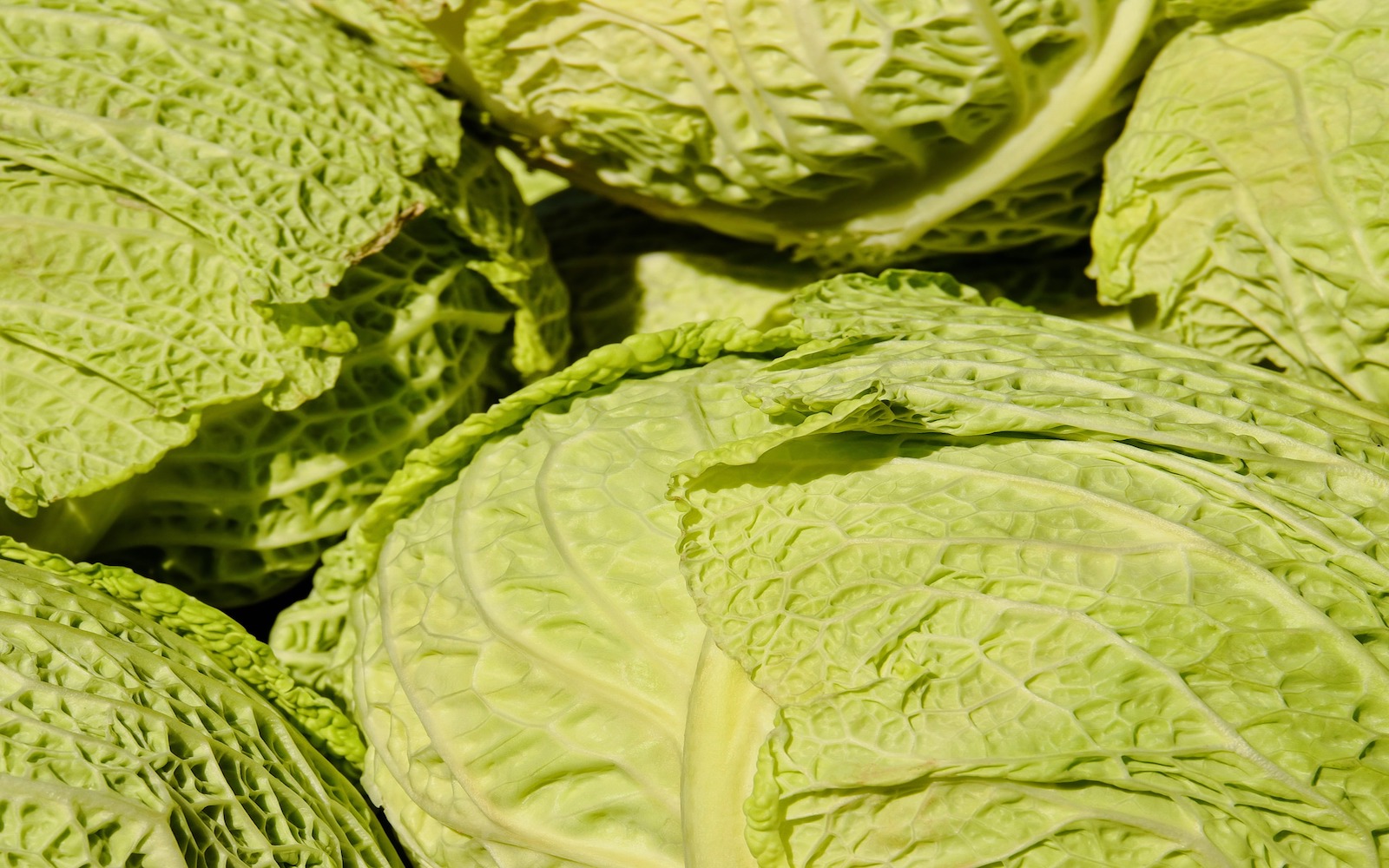 Cabbage is believed to have originated in the eastern Mediterranean, and was spread by the Celts into Northern and Western Europe. It comes in multiple varieties (Napa cabbage, cannonball cabbage, boy choy, etc…) and many different colors as well (red, purple, and green to name a few). Cabbage is high in fiber, vitamin C, and vitamin K, and can also help improve digestion and ease headaches.

For recipe ideas, check out this Red Lentil Cabbage Soup with Cilantro Oil, or throw together a Russian-Inspired Cabbage and Mushroom Rye Bread Sandwich. Like Brussels sprouts, cabbage has a bit of a bad reputation for being a tasteless, watery vegetable. But with the right ingredients and proper cooking method, it can be a delicious and nutritious addition to your kitchen. 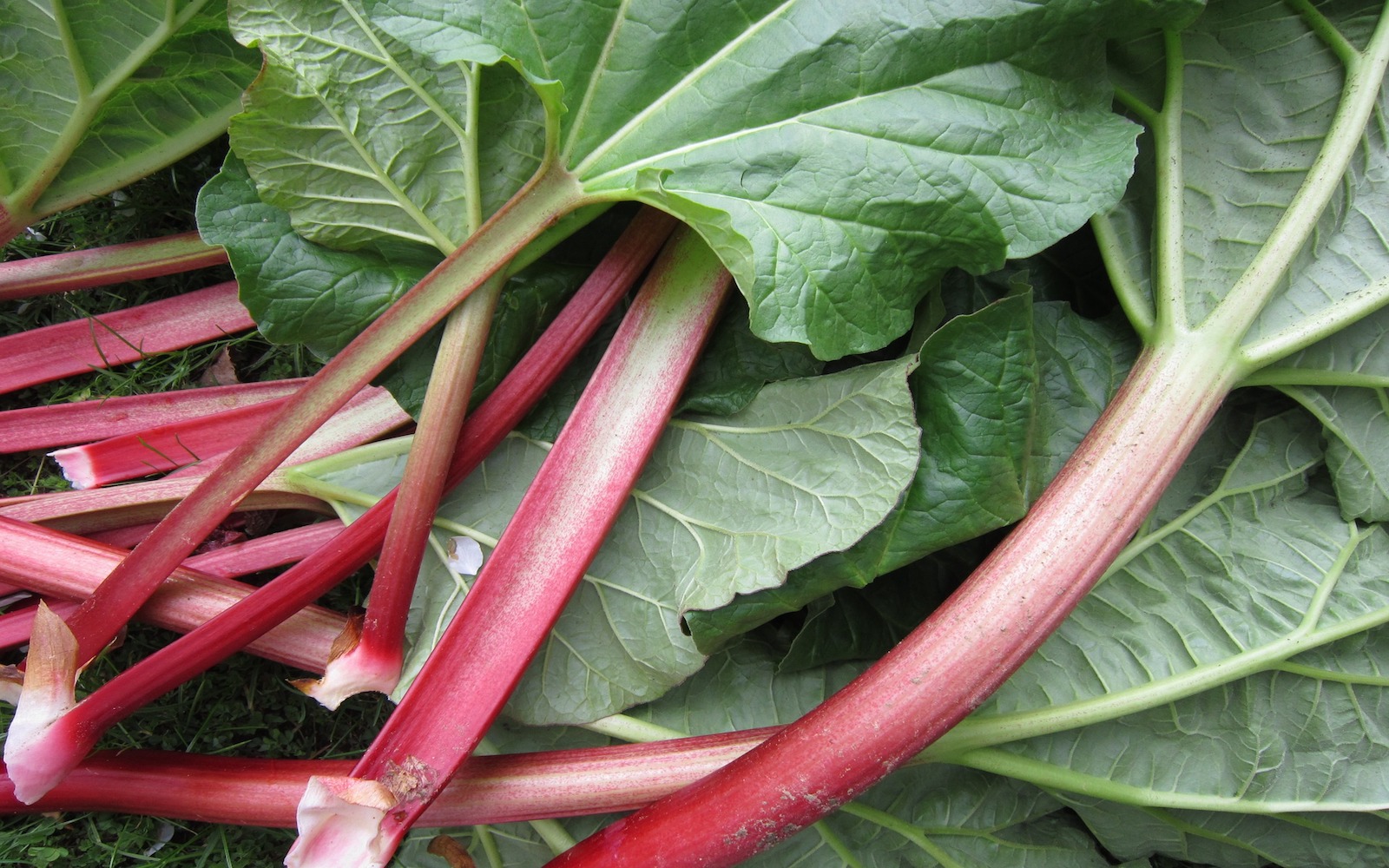 One important note about rhubarb: do NOT eat the leaves! There’s a good reason that only rhubarb stalks are sold in grocery stores–the leaves can be poisonous if consumed in large quantities, as they contain high amounts of oxalic acid, which can lead to kidney failure. That being, the stalks are perfectly safe to consume. Rhubarb can be traced as far back to 206 BC in China, and was used by the Ancient Greeks and Romans for medicinal purposes. The Greek word for rhubarb was rha barbaron, which essentially means “not from around these parts.” Rhubarb is a good source of vitamins C and K, and one cup of cooked rhubarb contains nearly as much calcium as a glass of milk. It has an extremely bitter taste on its own, and is perhaps best known for its role in rhubarb pie and other sweet desserts.

However, for a more savory recipe, try this Rhubarb Lentil Soup, or, if you’re looking for a unique beverage, sip on this Rhubarb and Ginger Shrub Drinking Vinegar. For a cool springtime dessert, make some Raw Strawberry Rhubarb Cream Pie. 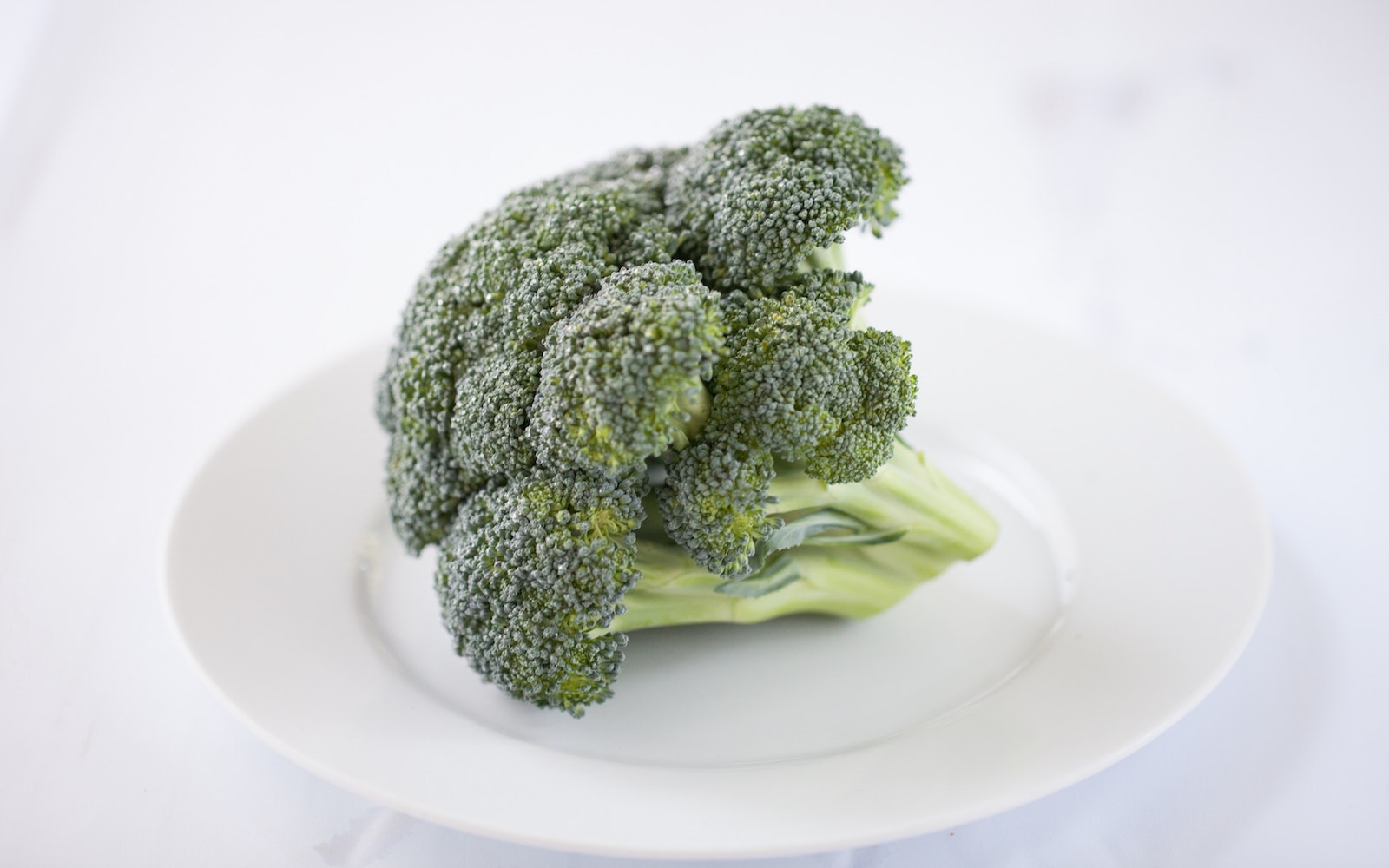 Broccoli, despite what you may think, doesn’t grow naturally in the wild–it was a manmade invention, carefully bred from the wild cabbage plant, Brassica oleracea, thousands of years ago. Other veggies on this list (cauliflower and Brussels sprouts) also stemmed from this cabbage plant and can also be considered human inventions. Broccoli had its origins in Italy, and the broccoli we usually buy in grocery stores is technically called “sprouting broccoli” to distinguish it from other varieties such as broccolini and broccoli rabe. Broccoli is an excellent source of vitamin K, which aids in proper blood clotting, and may also help develop stronger bones.

For a unique pasta dish, try out this Pistachio and Broccoli Pesto Spaghetti, packed with nutrients and flavor. You could also cook up some gluten-free Crispy and Comforting Broccoli Cheese Tops to use as an appetizer or a kid-friendly meal.

For more spring cooking tips, check out 10 Fruits and Vegetables to Look for in Early Spring Farmers’ Markets, packed with suggestions for even more seasonal produce to add to your kitchen. Also take a look at 25 Most Popular Spring Vegan recipes You Can’t Afford to Miss!