Now that You Can Pronounce Quinoa, Try These Other Whole Grains 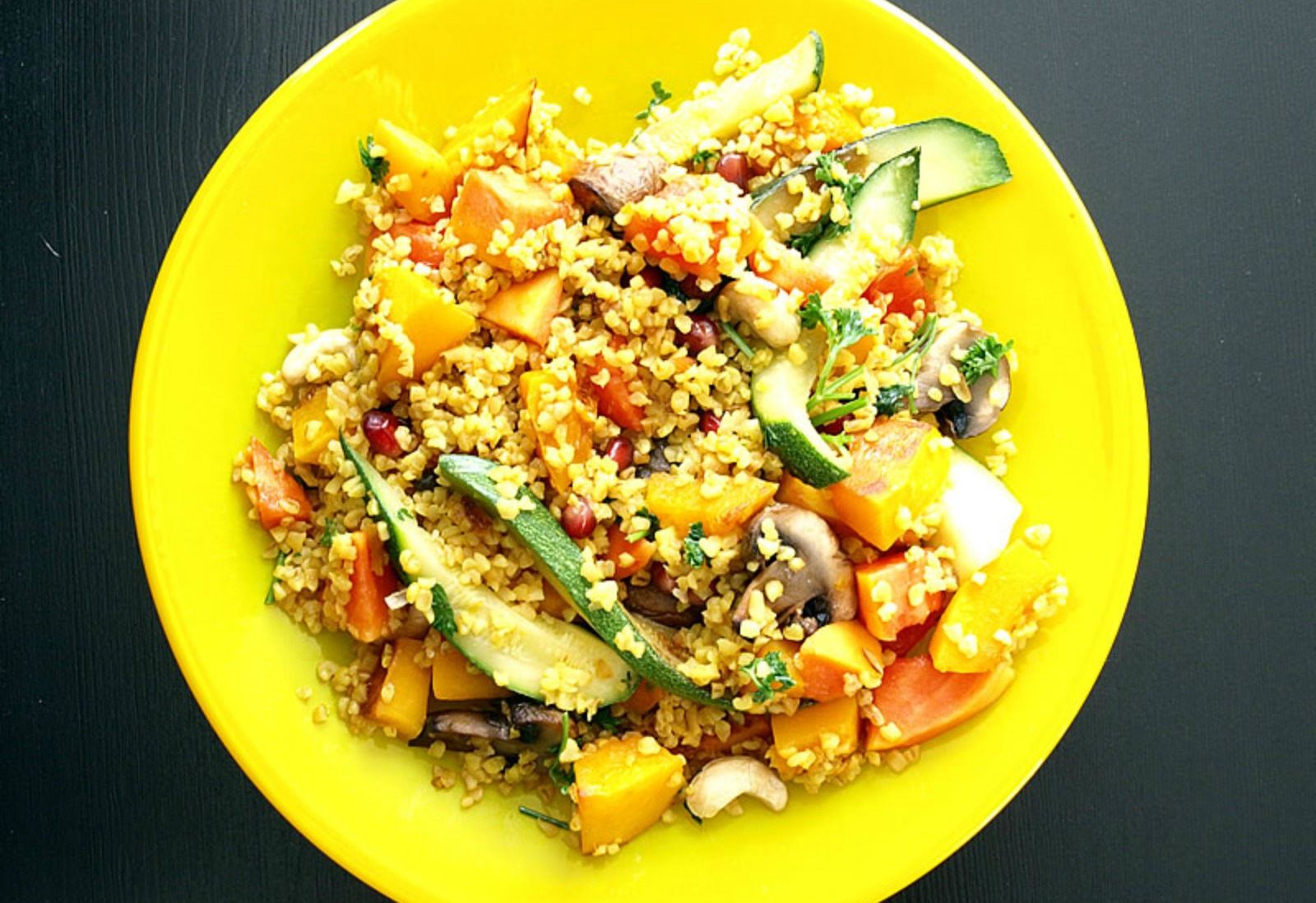 If you want to try eating something new, try something old, ancient even. Whole grains called ancient grains have been around for centuries and were cultivated and eaten as far back as the ancient Egyptians. As more and more modern grains such as wheat and corn are being manipulated and hybridized in order to increase production and reduce costs, they look and taste less and less like their ancestors. These changes may be why more and more people are intolerant to these grains. Ancient grains, however, come from seeds that have been around for millennia and are free of hybridization and genetic manipulation. Besides being natural and healthy, these ancient grains have unique tastes and textures and many of them are gluten-free. Everyone is familiar with quinoa but now that you know how to pronounce that one, it’s time to try some other whole grains – the ancient grains. 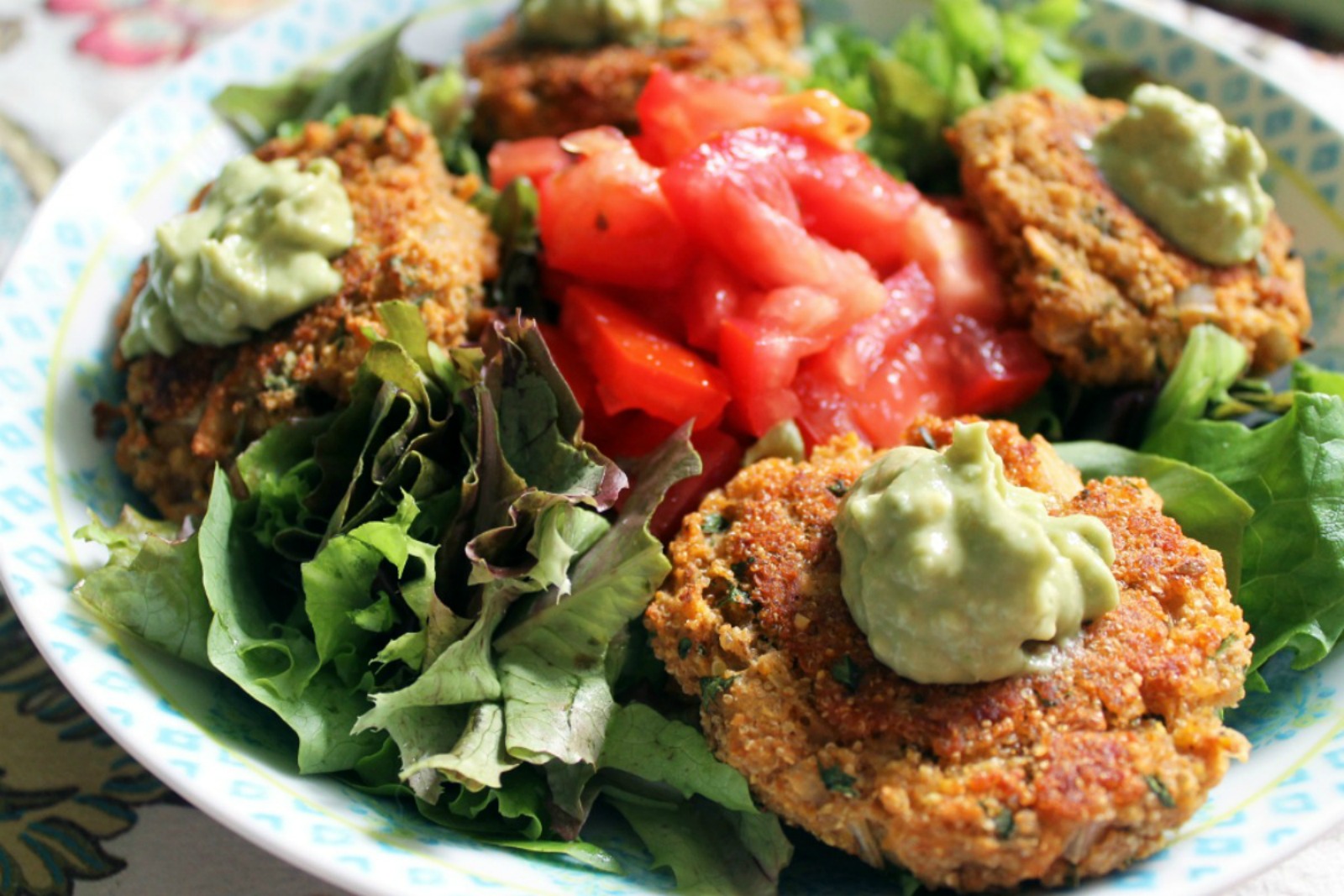 Amaranth is a South American grain that is both wheat-free and gluten-free. It is high in protein and contains more amino acids like lysine, methionine and cysteine than other grains. Amaranth also contains lots of vitamin C, calcium and iron. Amaranth is a tiny poppy seed-sized grain that has a grassy, nutty flavor. It becomes sticky when cooked. It is a good substitute for rice and tastes great mixed with veggies. Eat amaranth as a cereal or add it to soups and stews. You can even pop it! Just toast the seeds in a hot, dry skillet, shaking it until they pop. To cook: use 1 cup amaranth to 3 cups water; simmer 25-30 minutes. Try it in this Yogurt Mandarin Cake with Amaranth Crust and these Red Lentil and Amaranth Protein Patties with Spicy Avocado. 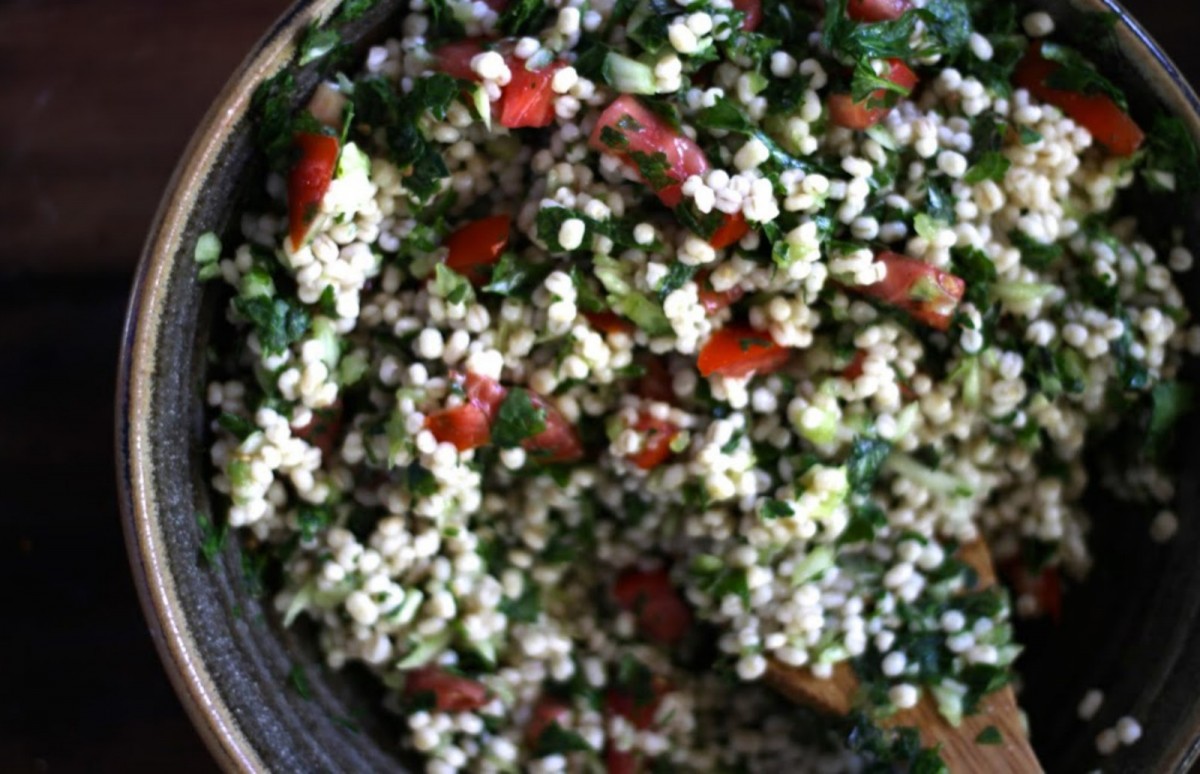 Originating in Ethiopia and Southwest Asia, barley is nutrient dense. It is high in B vitamins, iron, copper, manganese, selenium and fiber. Barley comes in hulled or pearl. Hulled barley retains more nutrients but cooks more slowly due to its tough hull. Pearled barley has the bran removed and so it cooks faster. Barley does contain gluten. Barley is a chewy but tender grain that has less starch than rice. It works wonderfully in soups and stews. To cook: use 1 cup of barley to 3 ½ cups water. Simmer 45-60 minutes. Try barley in this Barley-Lentil Soup with Potatoes, Mushroom Barley Grillers, Barley Risotto with Fava Beans, Corn and Mushrooms, Hearty Lentil, Mushroom and Barley Mash and Veggie Tabbouleh with Barley. 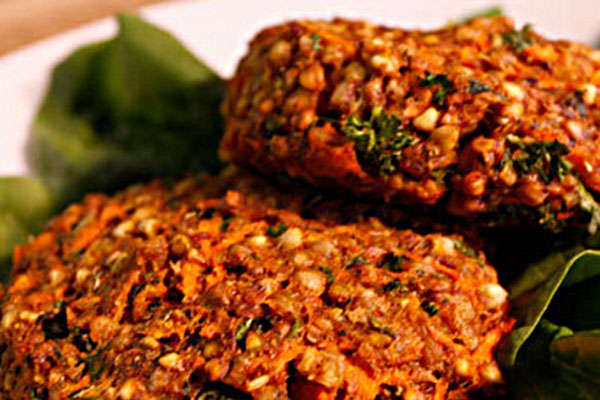 Buckwheat may have the word “wheat” in its name but it is gluten-free. Also called kasha and groats, buckwheat is found in Eastern Europe and Russia. It is high in niacin, vitamin B6, thiamin, riboflavin, magnesium, iron, zinc, copper and phosphorus. It is a complete protein with all the essential amino acids. Buckwheat has a very toasty flavor. It can be eaten as cereal or mixed with veggies as a side dish or salad. To cook: use 1 cup buckwheat to 2 cups water; simmer 20 minutes. Try buckwheat in these amazing Cajun Burgers, Buckwheat Turmeric Pancakes and Warm Berry Sauce, Buckwheat English Muffin Buns, Strawberry Chocolate Chip Buckwheat Muffins, and Raw Sprouted Buckwheat Bars.

Bulgur is often found in Middle Eastern cuisine as an alternative to rice or couscous. It is made from hard red wheat and sometimes, white wheat so it does contain gluten. Bulgur is high in fiber, manganese, niacin, iron and vitamin B6. It is a quick-cooking grain because it is parboiled. To cook: Cover 1 cup bulgur with 1 ½ cups boiling water. Let stand, covered, about 20-30 minutes, until the water is absorbed and the grain is light and fluffy. Try Colorful Bulgur with Papaya and Pomegranate, Meatless No-Fu Love Loaf or Bulgur with Curcuma, Veggies, Nuts and Cranberries. 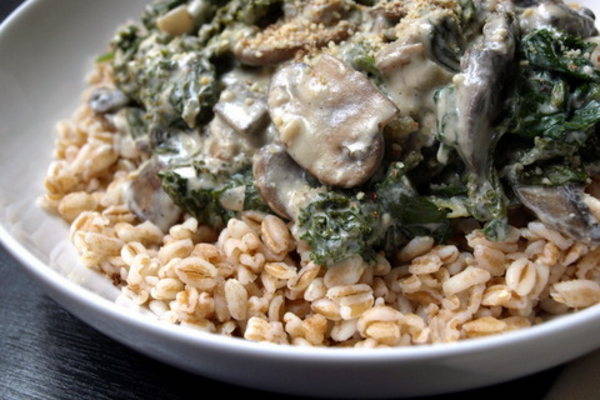 Farro is a wheat grain that was used by the Egyptians to bake bread. It is also called emmer. It is high in fiber, protein, niacin, magnesium and zinc. Farro is commonly used in Italy and it does contain gluten. It has a chewy texture and nutty flavor. It works well in soups, stews and other hearty dishes. To cook: use 1 cup of faro to 3 cups water; simmer 25-30 minutes. Farro makes a perfect bed for this Kale and Mushroom Gratin. 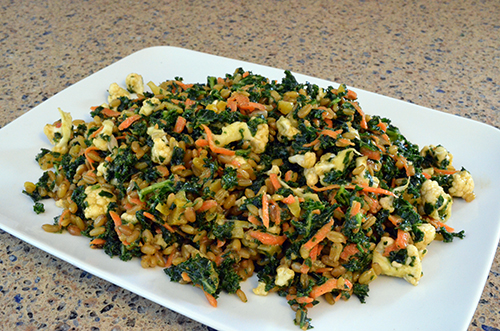 Freekah is an Arabic name which means “to rub” which is how it is made. Young green wheat grains are picked, parched, and roasted and then the grain is rubbed off. These young grains are high in fiber and protein and do contain gluten. To cook: use 1 cup freekah to 2 ½ cups water; simmer 40-45 minutes for the whole grain or 10-15 minutes for the cracked grain. Try freekah in this Tempeh Bacon Bowl, Freekeh Salad with Cucumber, Pistachios, and Mint, Freekeh Salad with Beets, Cilantro, and Lime, and this Freekah Kale Salad. 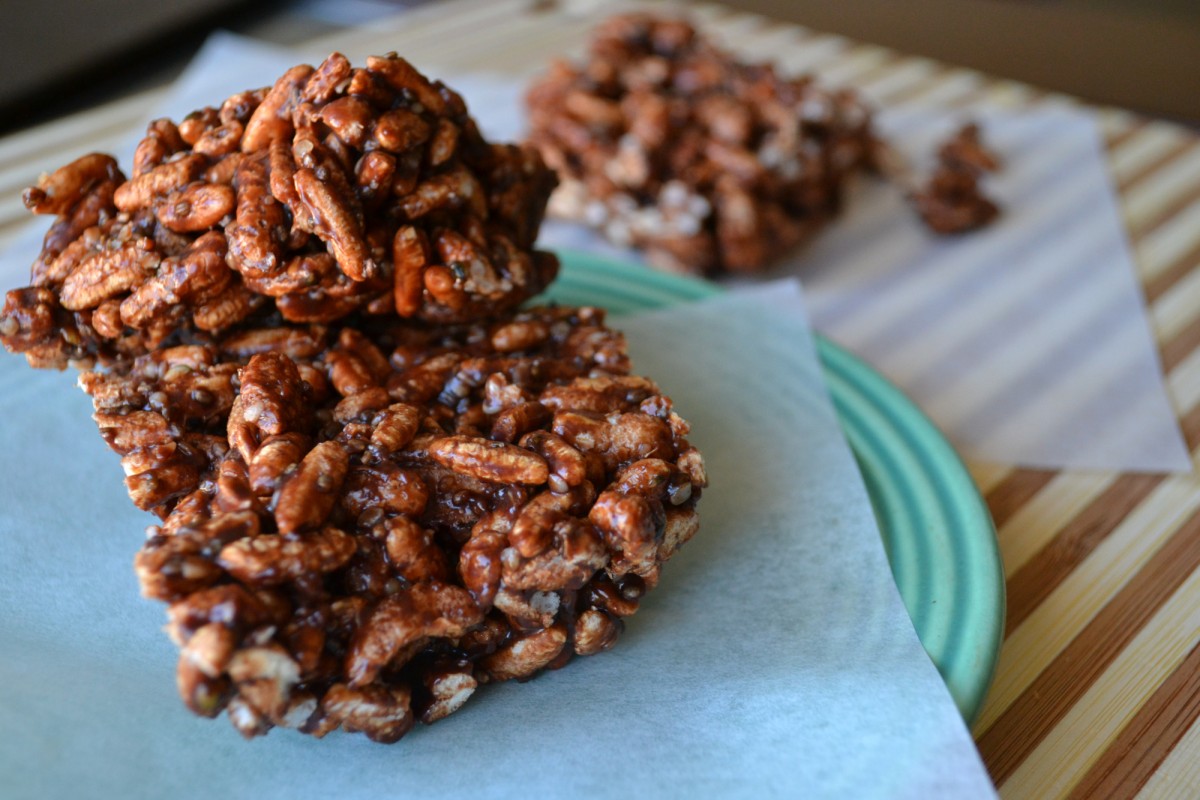 Kamut is believed to have first been grown in Egypt or Asia and is three times the size of common wheat. It has more protein and amino acids than common wheat as well as high amounts of essential fatty acids, vitamins and minerals. Kamut is cooked more like beans than grains as they need to be soaked for a few hours first. To cook: soak 1 cup kamut in water for several hours, then drain. Use 1 cup kamut to 3 cups water, simmer 30-40 minutes. Try it in these Healthy Vegan Cocoa Puffed Rice and Kamut Crispies and these Emergency Vegan Protein Bars. 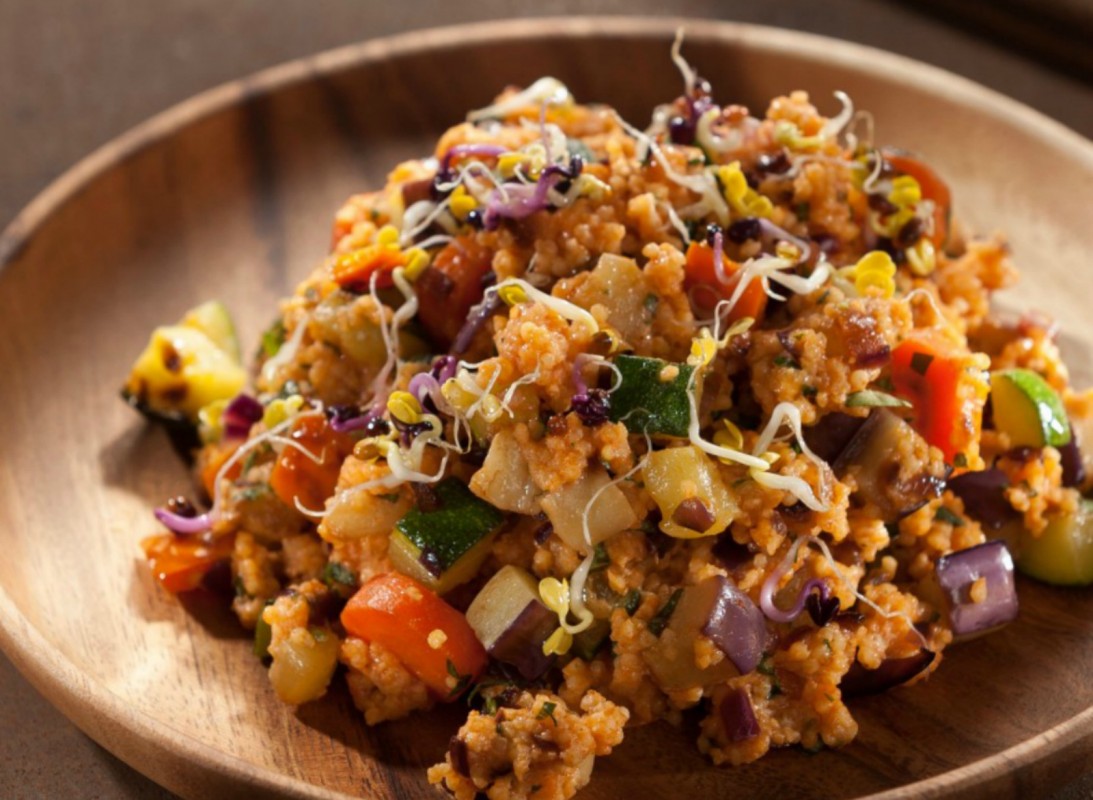 Millet is a tiny seed that is a staple in Asian and African countries, yet in the United States, it is mainly found in birdseed. Millet is gluten-free and high in antioxidants and magnesium. It has a mild, nutty flavor so it is best toasted before cooking. To cook: use 1 cup millet to 2 ½ cups water; simmer 20-25 minutes. Try millet in this Savory Millet Upma, Mediterranean Spartan Strength Millet dish, Rainbow Vegetable Saffron Millet Croquettes, Goji Millet Tabbouleh, Creamy Millet and Cashew Pudding and this porridge with Millet, Dried Figs, Cinnamon and Orange. For more recipes, see 8 Incredible Ways to Cook with Millet. 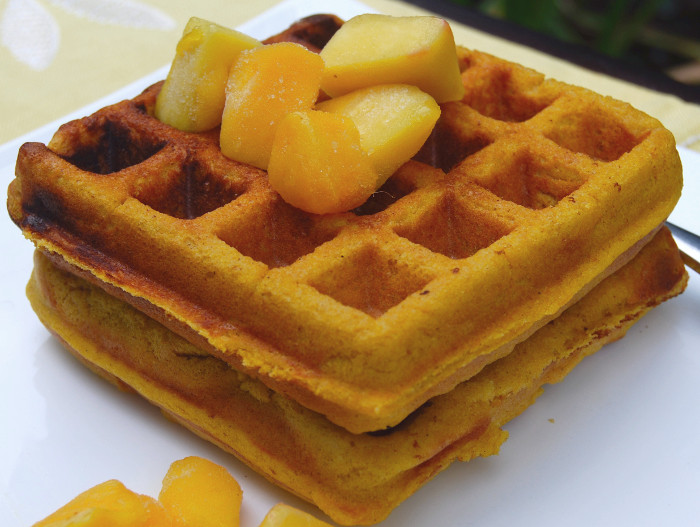 Sorghum originated in Africa and is a common grain around the world. In the United States, however, it is mostly used to feed livestock. People who are gluten-free know about sorghum though. It is gluten-free and contains many nutrients including antioxidants. The entire seed is edible. When used in baking, sorghum flour adds a mild, sweet taste. To cook: use 1 cup sorghum to 3 cups water, simmer 50-60 minutes. Try it in these Peaches and Cream Pancakes, Healthy Summery Juicy Mango Waffles and these Homemade Peanut Butter Dog Biscuits. 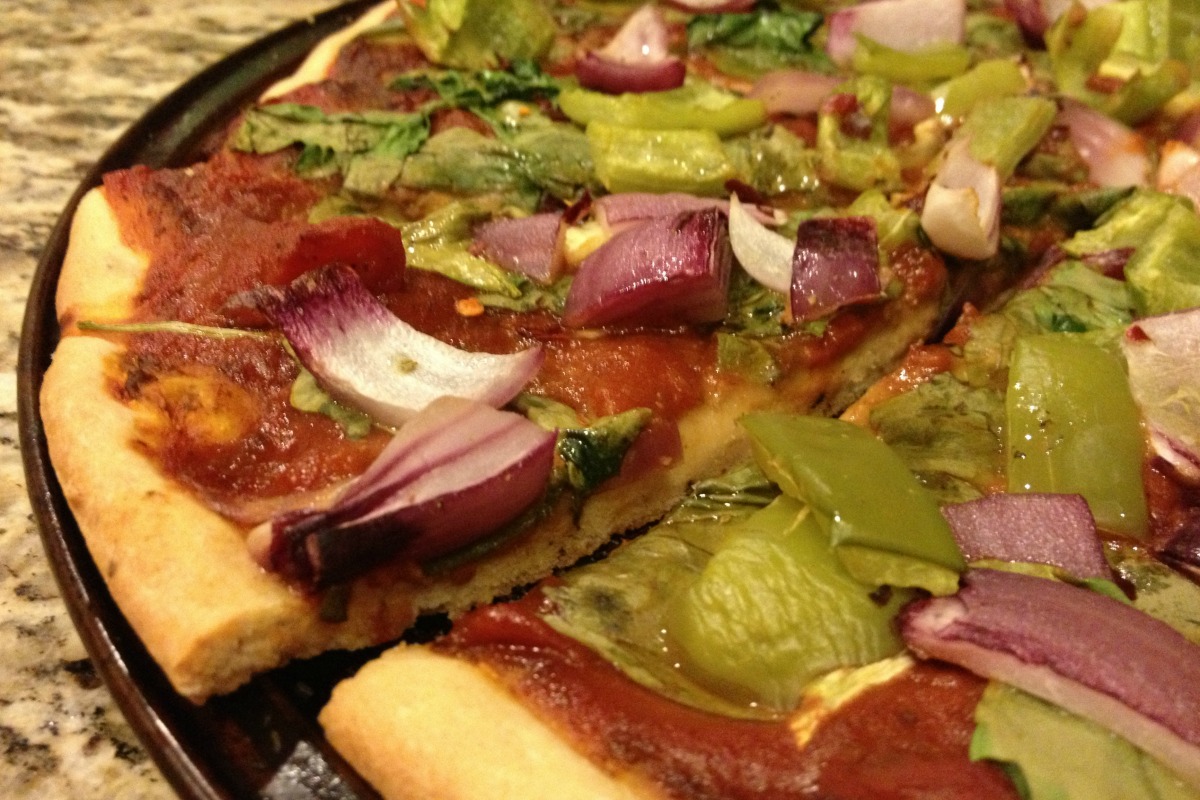 Spelt is an ancient grain that was eaten in medieval times. It is a wheat-based cereal grain which is high in protein, fiber, magnesium, zinc and iron. It has a chewy texture and a sweet, nutty flavor. People find it easier to digest than wheat so it is a good alternative for people who need to avoid wheat. It does, however, contain gluten so it is not appropriate for people who need to eat gluten-free. Most people think of spelt flour for baking but the grains are delicious. Try spelt as your morning cereal or in place of rice in stir-fries. Add it to your soups and stews to make them heartier and give them a nutty flavor. To cook: use 1 cup spelt and 2 cups water; simmer 60 minutes. Try spelt in this Spelt Pizza with Roasted Veggies, Spelt, Mango and Coconut Banana Bread, and Raspberry Jam Spelt Crumb Bars. To learn more, see Want to Try Baking with Spelt Flour? Here’s What you Need to Know. 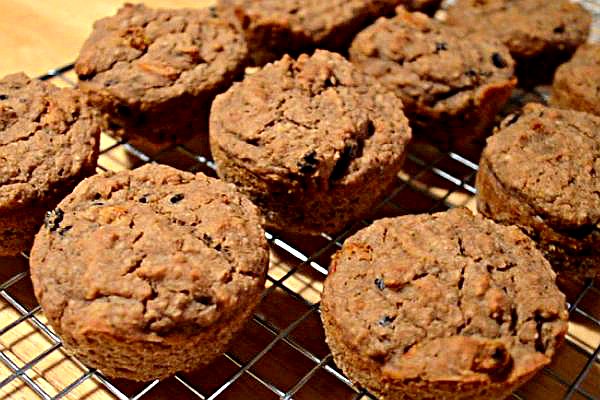 Teff is the world’s tiniest grain; it’s about one-hundredth the size of a wheat berry. It is made from the seed of an Ethiopian grass. It is gluten-free and nutrient-dense, high in protein, calcium, iron, potassium, phosphorus, zinc and all B-vitamins except B12. Teff can be used in baking, as a thickening agent, in stews, cereals, stuffing and pilafs. It may be best known as the main ingredient in the Ethiopian bread called injera. To cook: use 1 cup teff and 2 ½ cups water; simmer for 25 minutes. Try teff in these Gluten-Free Goji Muffins. 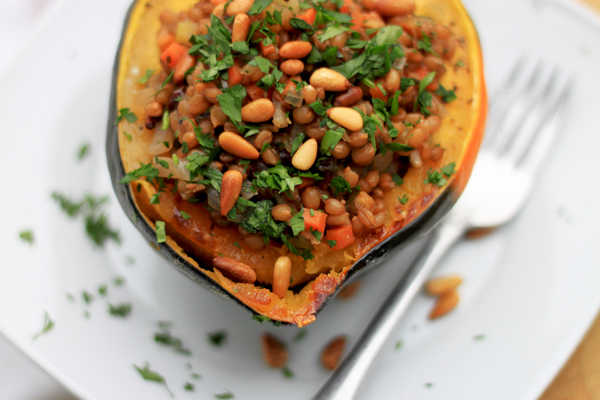 Wheat berries are the whole grain version of whole wheat flour. They are the entire wheat kernel, including the bran, endosperm and germ so they do contain gluten. They are sometimes labeled as “hard red winter wheat.” Wheat berries are high in fiber and protein and contain many nutrients including potassium, folate, calcium and vitamins E and B. Wheat berries are hearty and work well in soups, salads, stews and side dishes. They can also be eaten as a breakfast cereal. To cook: use 1 cup wheat berries to 3 cups water; simmer 1 ½ -2 hours. Try wheat berries in this Stuffed Acorn Squash with Wheat Berries, Pine Nuts and Sage.

Quinoa is great and I love it! It’s also fun to try new whole grains and learn just how many healthy, delicious foods there are just waiting for us to discover them. Find out what our ancestors knew all along and enjoy these ancient grains.