It has more calcium than any other grain, is a complete protein, is the size of a poppy seed, is the only ancient grain (or seed) to contain Vitamin C, is completely gluten and grain-free, and is rich in iron, magnesium, Vitamin B6, fiber, and protein. Meet teff – the Ethiopian superfood that you just have to try! Teff is the most unique grain-like seed that exists when it comes to nutrition, even outweighing quinoa in its nutritional value.

Teff is the tiniest grain-like seed to exist and is one of the most fast-growing grains at that. One pound of teff grain can quickly turn into one ton just within 12 weeks of its growing cycle. That’s twice as fast as wheat, which is the main reason it’s known as the Ethiopians’ choice food. Teff has been used for years to protect Ethiopians from famine and hunger, along with provide their bodies with nutrients to sustain them for long periods of time. 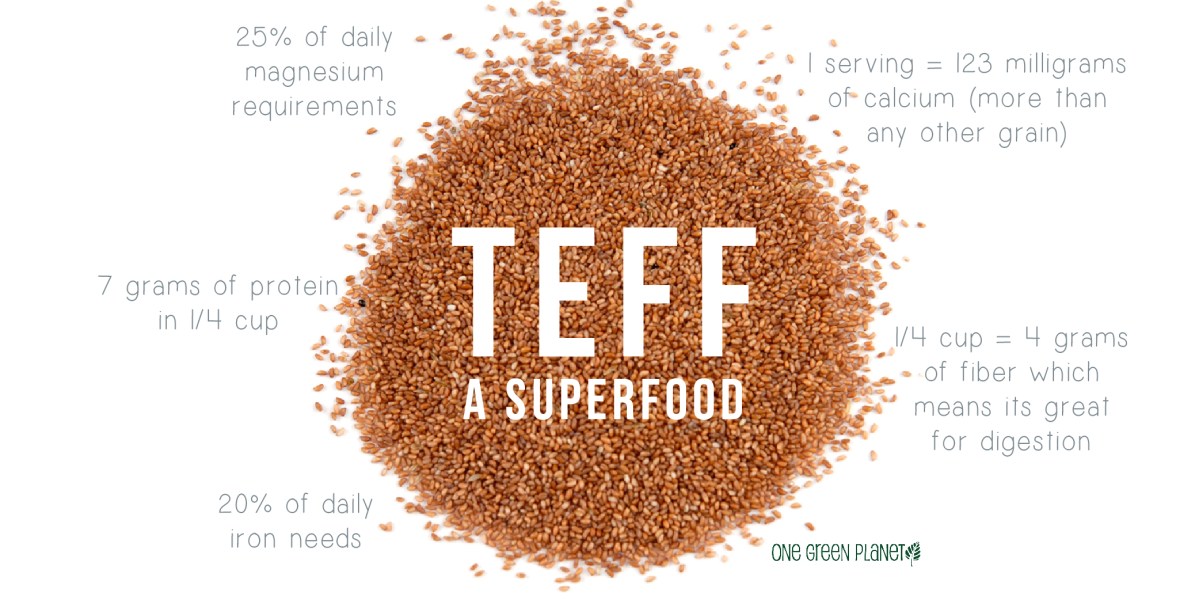 What Can Teff Do For You?

Just one serving of teff provides 123 milligrams of calcium, which is more than any other grain and about as much as a cup of spinach. Teff also contains 20 percent of your daily iron needs and 25 percent of your daily magnesium requirements, which can help regulate your metabolism, enhance energy, maintain regularity, and help you relax and rest. Teff also contains more protein than quinoa, with 7 grams in just 1/4 of a cup! In that same serving you’ll also get 4 grams of fiber, which makes this grain a fantastic choice for your digestion.

How Does it Taste?

Teff has a delicious, nutty flavor and comes in two different varieties: white and brown. Both are nutritionally equal, though brown teff is said to resemble the taste of molasses and offers a sweeter flavor than white teff.

How Do You Use It?

Like any other grain, teff can be made into a delightful breakfast porridge and has the same consistency as grits or Cream of Wheat. Since teff is completely gluten-free and grain-free, it can be used to replace any gluten-containing or grain dish in your diet. Cook with it in soup, try it in a tofu scramble, make a pilaf with it, or even bake with it!  Teff is sold as a flour for its thickening properties, so it’s a great gluten-free option compared to some other, less nutritional gluten-free flours on the market. These Gluten-Free Goji Berry Muffins and Deep Dish Cinnamon Apple Skillet Cake made with teff flour are a great way to  try it out if you haven’t already.

Where to Find It?

Teff can be found online at most retailers that sell grains and can be found in health food stores nationwide. It’s around the same price as quinoa, which may not be cheap, but is proof you get what you pay for.

How to Cook It:

To cook teff, all you need to do is simply boil some water on the stove with a pinch of salt. Use three times as much water (or non-dairy milk) as you would of teff grain. Once the water reaches a boil, reduce to medium heat, add the teff, and stir slightly. Cook on medium heat for about 15-20 minutes. Once the grain becomes soft and has absorbed most of the liquid, turn off the burner, remove from the stove, and put the lid on the pot to let the teff steam up and set about 5 minutes. Consume right away since teff can become soggy or too thick (like oatmeal does) if left sitting for too long. It should be soft and creamy, with even a little wiggle room to add more non-dairy milk if you like (for extra creaminess, of course.)

You can also cook teff in the slow-cooker if you like, using the same ratio of liquid to teff (three to one.) Cook on high for an hour or low for two hours.

Top with your favorite porridge toppings like nuts, seeds, cinnamon, fresh fruit, or flax and chia seeds. Teff pairs well with a variety of vegan breakfast foods, so try new things and see what you enjoy. It can also be cooked savory style, and pairs nicely with some turmeric, black pepper, sage, and garlic.

Have you ever had teff? How did you prepare it?