These Breathtaking Images Reveal That by Destroying Nature, We are Destroying Life Itself

Creative visual campaigns can go a long way in helping to raise awareness of pressing social and environmental issues. WildAid’s “Protect the Pandas of Africa” campaign, which ran in China back in 2013, aimed to raise awareness among Chinese consumers about the link between purchasing goods such as ivory and illegal wildlife poaching. Meanwhile, Care for the Wild’s “No Photos, Please” campaign aimed to discourage tourists from getting their pictures taken with trafficked wild animals such as lorises. While the “Let’s Face It” visual petition campaign has made great headway in highlighting the perilous state of Maui’s dolphins.

Artists, graphic designers, and illustrators have often sought to address issues such as climate change, plastic pollution, and habitat degradation in their work … and now, the German environmental activists’ collective Robin Wood has created a series of stunning images called “Destroying Nature is Destroying Life.” These works point to the sad truth that in desecrating some of our planet’s most important habitats, and using up its resources at a much faster rate than they can be replaced, we humans are ultimately bringing about our own demise.

The pictures feature three different landscapes being torn asunder by human activity, each represented by the shape of an animal who comes from that particular habitat. 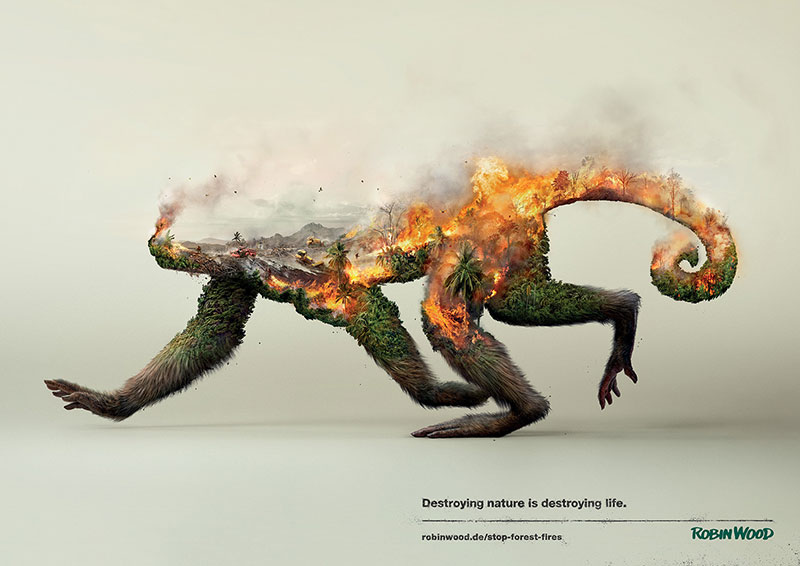 In this close-up of the above image, it is revealed – in excruciating detail – how the world’s tropical rainforests are being laid to waste. 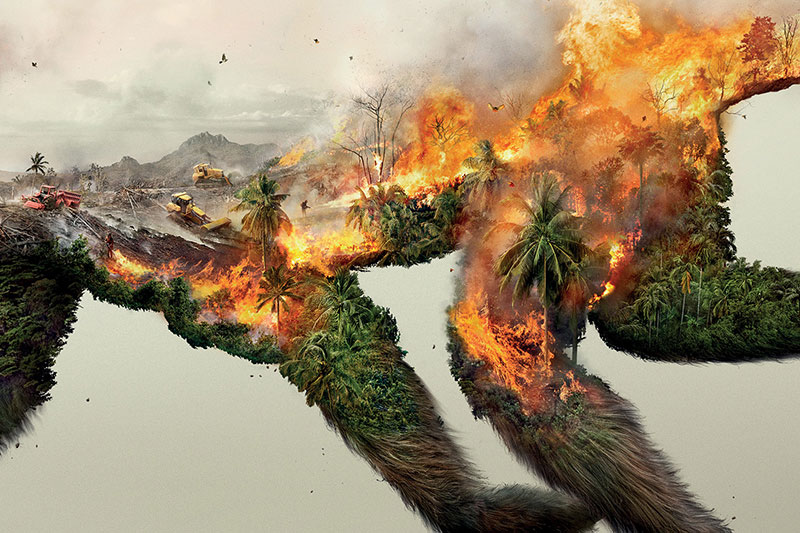 It is as though the animals portrayed in the picture are trying to escape their terrible fate … but they cannot, because their homes are a vital part of their existence. The world has lost 52 percent of its wildlife in the past four decades, primarily driven by habitat loss. 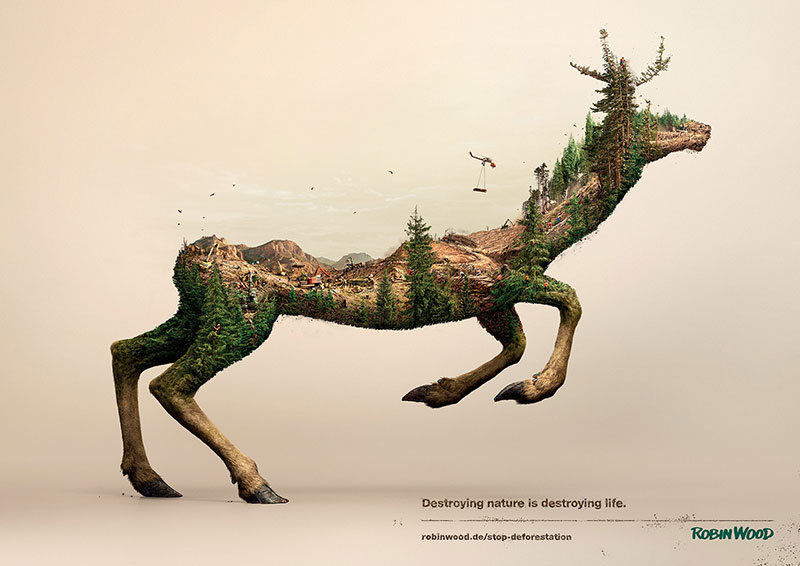 This habitat loss has largely occurred because of human industrial activities, such as animal agriculture and palm oil production. Beef production, for example, is destroying the Amazon rainforest… 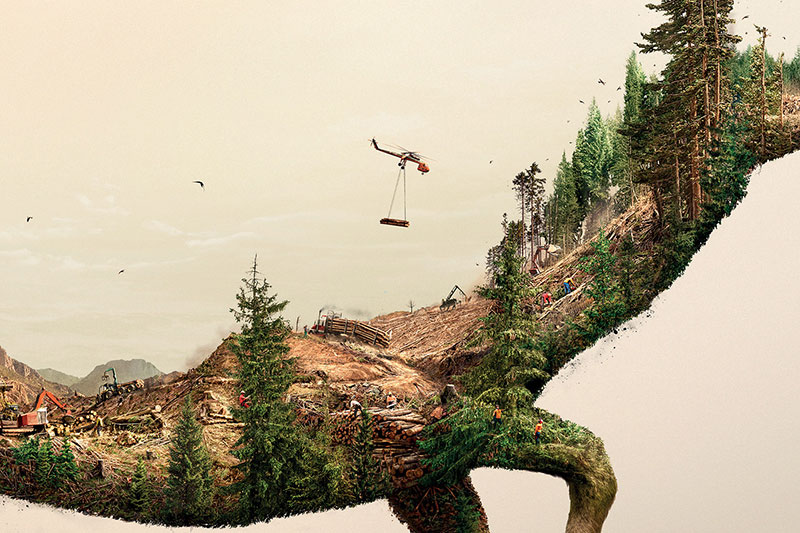 …and is even having a detrimental effect on the icy landscape of the Arctic, as greenhouse gas emissions caused by deforestation are driving the world’s temperature upwards and causing ancient glaciers to melt. 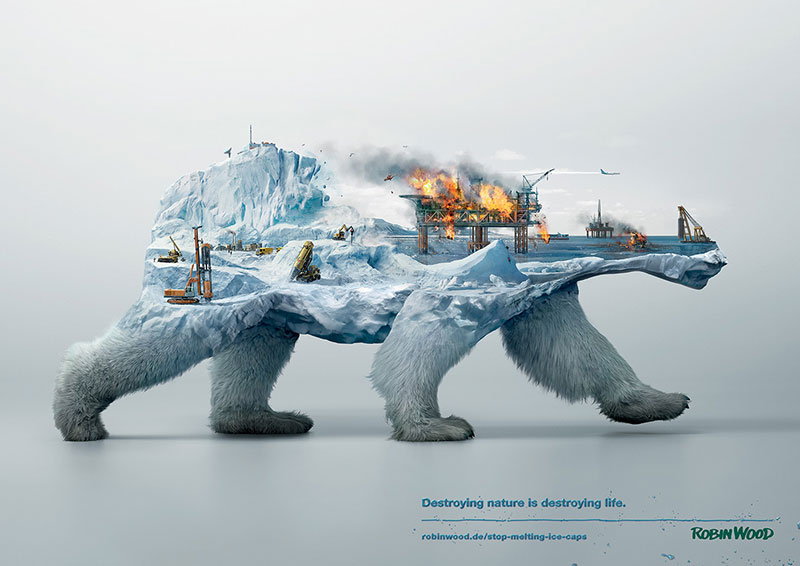 The heartbreaking truth is that climate change has now reached a “point of no return” – we humans have even managed to cancel the next ice age, which had been scheduled to take place in 50,000 years’ time! 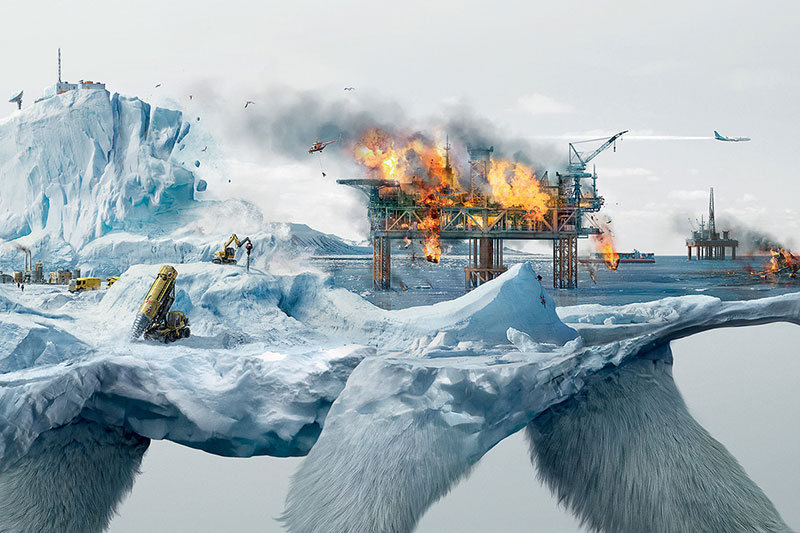 These breathtaking images remind us that while the outlook for this planet may look bleak, we still have the power to ensure that some of the worst effects of climate change and wildlife loss may be avoided. 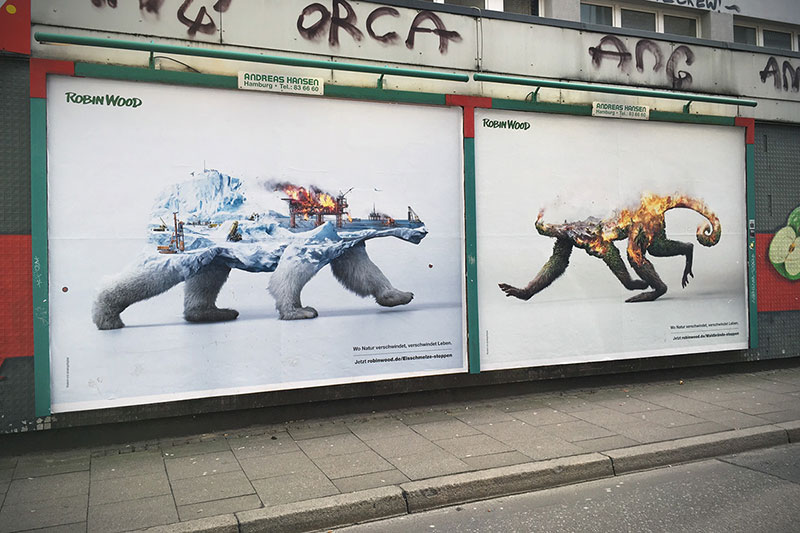 There are many ways that you can help make a difference for our planet today. By cutting out meat and dairy, one person can help save over 200,000 tons of freshwater resources every single year! The animal agriculture industry is responsible for at least 14 percent of global greenhouse gas emissions – though some organizations, such as The Worldwatch Institute, have discovered that the true figure could be as much as 51 percent. It also occupies 45 percent of the world’s total land area and has driven many wild animal species out of their natural homes and toward the brink of extinction.

The destructive palm oil industry, too, is placing species such as orangutans, pygmy elephants, and Sumatran tigers, at risk of extinction. It is also placing the health of Indonesian people in grave danger, and releasing huge amounts of greenhouse gases into the atmosphere. Avoiding palm oil is one way to ensure that the demand goes down and the terrible forest fires of Indonesia – often started by palm oil companies as a quick way of clearing land – can stop.

Leaving seafood off your plate is also a powerful method of helping to conserve the vital oceanic ecosystems on which we all depend (the oceans provide us with an incredible 70 percent of the oxygen we breathe!). If current rates of fishing continue, scientists have estimated that the oceans will be devoid of all life by the year 2050 … or at least, that they will contain more plastic than fish by this date! Cutting down on your usage of plastic is another highly significant way to protect our Earth and its inhabitants. We currently throw around 8.8 million tons of plastic into the oceans every year. An estimated 700 marine species are at risk of extinction through ingesting or becoming entangled in plastic trash – even the most gigantic, majestic animals like sperm whales have met their deaths at the hands of our waste.

To learn more about how you can start helping our planet today, check out some of the resources below.