If You Took Seafood Out of Your Diet, How Would it Really Help the Planet? 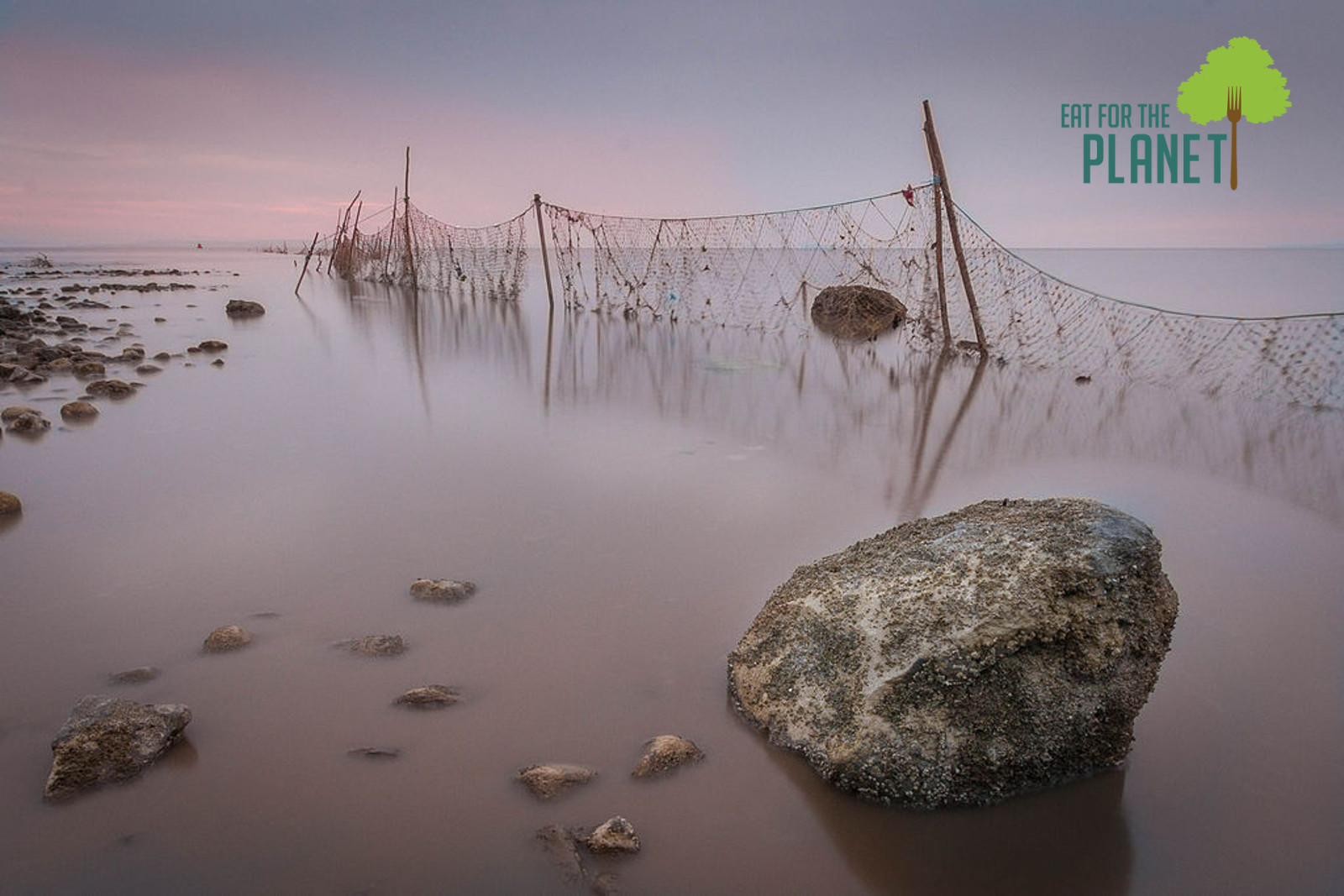 In the past 40 years, more than half of the world’s wildlife has been eradicated by human activities. Among the most impacted vertebrates include mammals, birds, reptiles, and (to the dismay of many ocean lovers) fish.

With ocean acidification and climate change already causing some major problems in today’s oceans, humans have a lot more to own up to. Most people may not even realize that their daily choices are causing problems worldwide. Whether or not you want to believe it, the simple act of eating commercially caught fish should be added to the list of threats facing our oceans. With millions of fish caught each year to reach the fish demands that humans have today, it’s time to get down and dirty on the topic of fish consumption.

In 2009, United States citizens consumed approximately 4.8 billion pounds of seafood, that equals out to 15.8 pounds of seafood per person. According to the National Oceanic and Atmospheric Association, “On a per capita basis, Americans eat about 3.5 ounces per week.”

Just over three ounces? Doesn’t seem like a whole lot, does it? Well, if a single human consumed the exact average per year, their consumption of fish would reach up to 182 ounces annually. When you multiply that by the 300,000,000 plus people living in the U.S., you’re looking at a huge problem – especially when you consider the rates at which fish are taken from the oceans.

Overfishing is taking away all of our fish … and more.

Overfishing is the act of taking more fish from a population than can be replaced by natural birth rates within that population.

According to a study conducted and published by the UN Food and Agriculture Organization, 80 percent of global fish stocks are “fully- to over-exploited, depleted, or in a state of collapse.” Also, about 90 percent of large predatory fish stocks (sharks, swordfish, and bluefin tuna) have been diminished since the 1950s.

So what does this mean? Well, in the simplest of terms, if current rates of fishing are not drastically reduced, it has been predicted that the stocks of every wild-caught seafood will collapse by 2048. This means less food for marine dwelling organisms which will impact entire food chains until, one day, there are literally no fish are left in the sea.

Instead of combating the issue of overfishing, some businesses have begun fish farming – a process that involves raising hundreds of fish in small tanks before they are sold as food. While farming fish may seem to solve our short-term problems, it looks like we need to start focusing on the long-term issues at hand caused by overfishing. 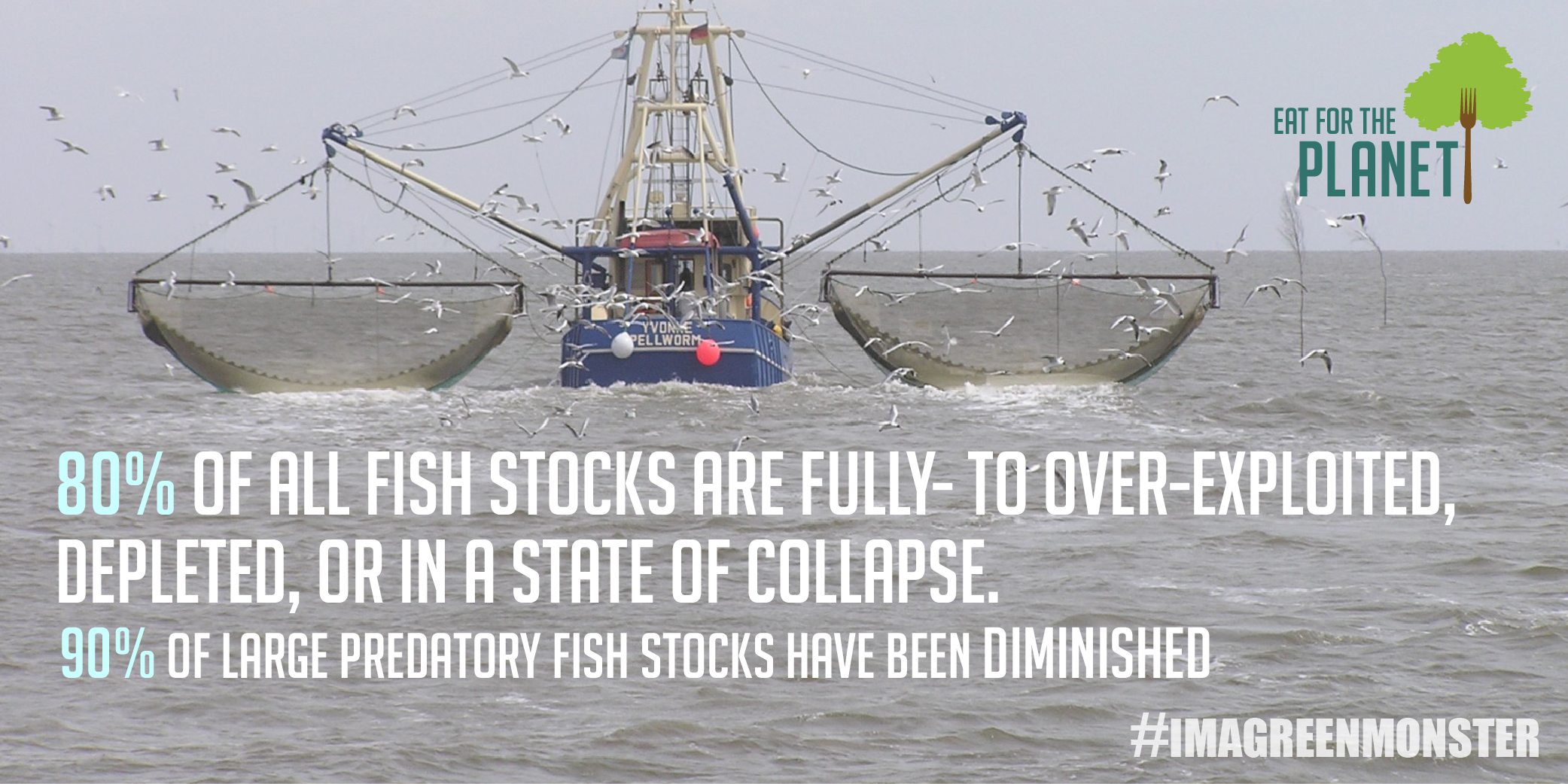 How we catch fish is becoming a total drag.

Driftnets, long lines, and trawls are all examples of destructive fishing methods that harm more than just fish populations. Each of these methods typically involves the use of long nets (made for entangling fish gills) or lines decorated with hundreds of hooks. While most of these methods are argued to be cost-effective and efficient for catching a large quantity of fish, they are leading to the destruction of non-target species – animal populations that are not targeted for sales by the fishing industry, also known as bycatch.

According to the World Wildlife Foundation, bycatch accounts for about 40 percent of global marine catches, and it is estimated that a commercial fisherman will catch about 20 pounds of bycatch for every one pound of targeted fish. It is further estimated that anywhere from 8 to 25 percent of global fish catches are discarded back into the ocean. This means that about 27 million tons of non-target fish (thats a weight equivalent to 600 TITANICS) are literally thrown out each year.

Studies conducted in 2002 confirmed that about 1,000 dolphins were caught and killed as bycatch by the Eastern Tropical Pacific tuna fishery annually. Every year, about 300,000 whales, dolphins, and porpoises become fatally entangled in fishing gear, and about 250,000 sea turtles are accidentally captured, injured, or killed by fishermen. Other animals that are frequently caught as bycatch include sharks (400,000 per year, to be exact), stingrays, and seals.

Not to mention invasive fishing methods are destroying the ocean environment as well. Trawl nets are dragged across the bottom of the ocean, designed to capture everything between the ocean floor and waterline. In experiments aiming to understand the damage caused by trawling, it was discovered that after one pass of a trawl net in Alaska’s waters, 55 percent of cold-water coral were unable to recover from damage within the following year. In areas that are often heavily fished in southern Australia, 90 percent of popular coral-attracting substrates were left bare.

In a 2006 report from the UN Secretary General, it was stated that “95 percent of damage to seamount ecosystems worldwide is caused by deep sea bottom trawling.”

The damage from bottom trawling is so significant that the damage can be seen from space. 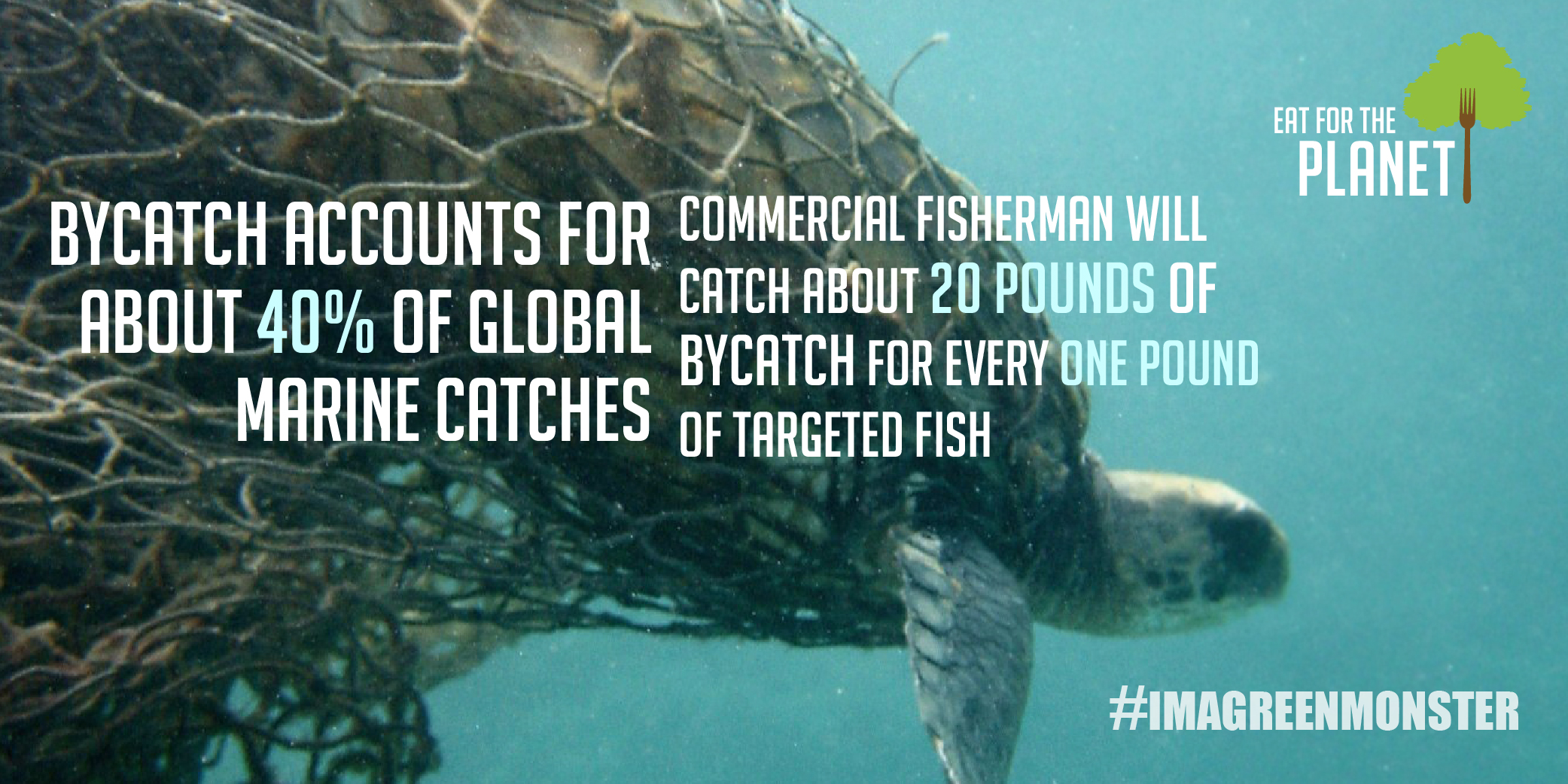 So how do I go about helping the planet?

While our taste for fish has definitely impacted the planet, there is a solution  – rethinking our diets to minimize the consumption of fish. According to Counting Animals, an individual who chooses to take on a vegetarian diet can save over 225 fish and 151 shellfish a year. If just half of the U.S. population (about 150,000,000 individuals) eliminated seafood from their diets, that would mean about 33,750,000,000 fish would remain in the ocean every year.

This difference could help repopulate vital fish stocks and allow them to recover, given ample time. In between 2000 and 2014, 36 fish populations were rebuilt as a result of a single fish-management law that would protect marine habitats essential to fish reproduction and safeguard the populations of small fish. At our current rates, only 1 percent of fish are recovering from depletion.

By removing fish from your diet (supplements included), you can boost marine animal populations and avoid health-threatening toxins. That’s right … toxins. A study conducted in 2013 by Maine’s Biodiversity Research Institute found that a whopping 84 percent of all fish contain unsafe levels of mercury! When you consider the benefits to the world’s oceans – and your health, the decision to alter your consumption of fish seems pretty fantastic. Although the oceans are constantly under threats from human derived actions, we should not give up trying to protect our seas. By simply changing your diet, you can easily make a huge impact on the health of the oceans as well as your own health and well-being.

While you don’t have to go full-on vegan or vegetarian to save the oceans, taking a week or two off of fishy meals each month can make an impact! Start with these tasty vegan meals that look and taste like fish, but don’t make you feel guilty afterwards. For example, tempeh “fish” n’ chips, tempeh “crab” cakes, and vegan sushi are alternatives that can help us refill our oceans as well as our stomachs. 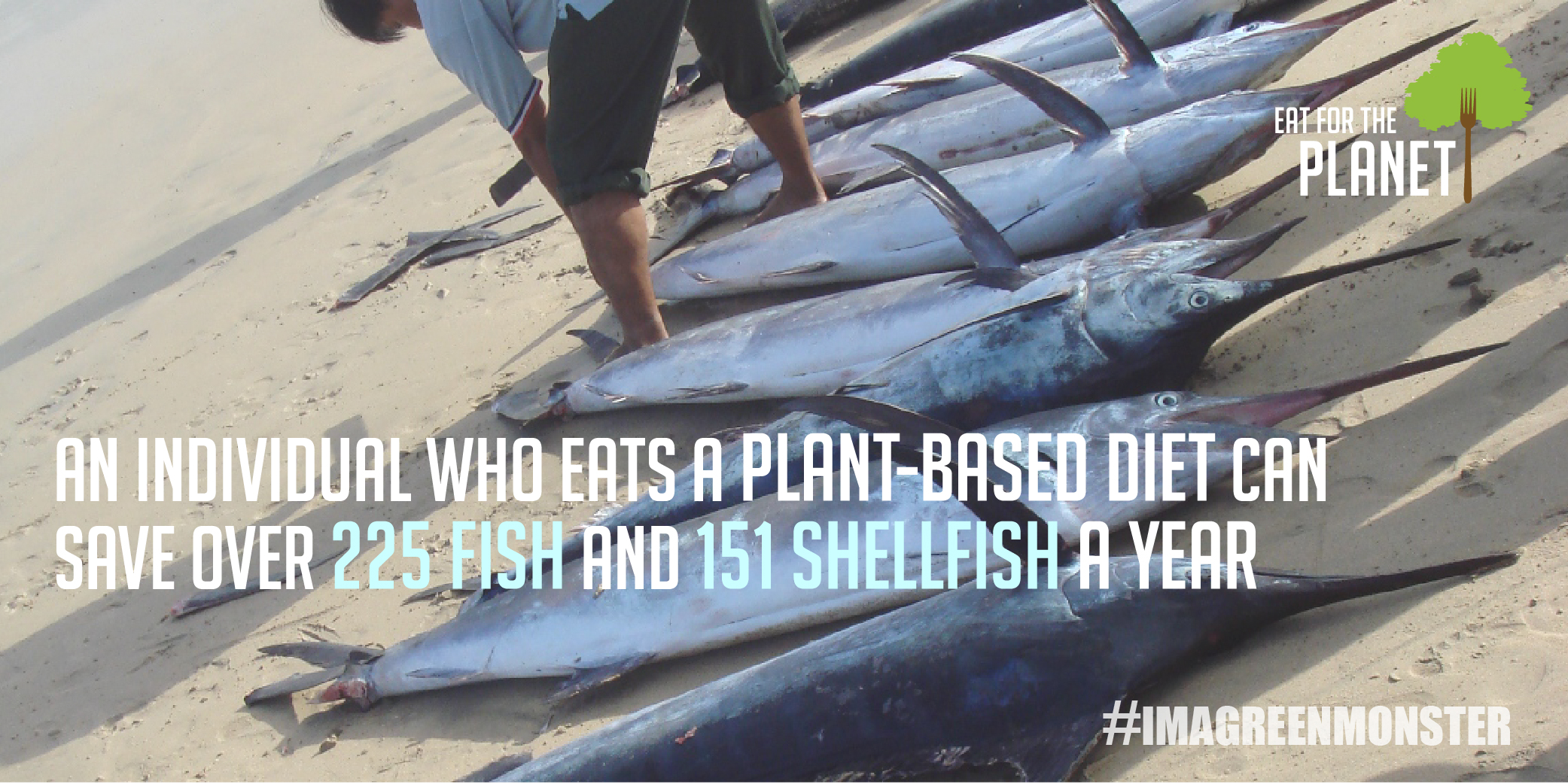