Whether or not everyone can agree on it, climate change is happening. According to NASA, the average global temperature has increased by over three degrees in the last hundred years. In addition, sea levels are up by over an inch, while overall precipitation has increased by eight inches. These rapid changes spell bad news for every living thing on the planet, but particularly for the Polar Bear. These animals are native to the arctic circle, where they have evolved to roam large sheets of ice, hunting the seals that also make their homes here. However, due to the rapid increase in ocean temperatures, the ice sheets are melting at the rate of 8.6 million acres per year, creating major changes in the polar bear’s natural habit.

While the governments of the world bicker about the causes of this situation, the glaciers are melting, fast. This means a change in the migration patterns of the seals, which forces the bears to journey far and wide looking for food, or to starve trying. Some bears are trying to adapt by swimming miles, sometimes for days on end looking for the seals. While others are adapting by feeding on new food sources. There have been recent reports of bears raiding dumpsters and even eating dolphins, who have also been forced into new migration patterns by changing water temperatures.

None of these animals understands that its habitat is disappearing. They don’t know why this is happening, or what to do about it. They only know that they are hungry and trying to feed themselves and their babies in the best way that they can. These bears are apex predators. Most of them have never even seen a human, yet they are becoming the poster children of global warming, victims of human offenses a whole world away. By now, we are all familiar with the idea that Polar Bears are disappearing, but a recent image from Andreas Weith of an emaciated bear in the Arctic solidifies what exactly this means: 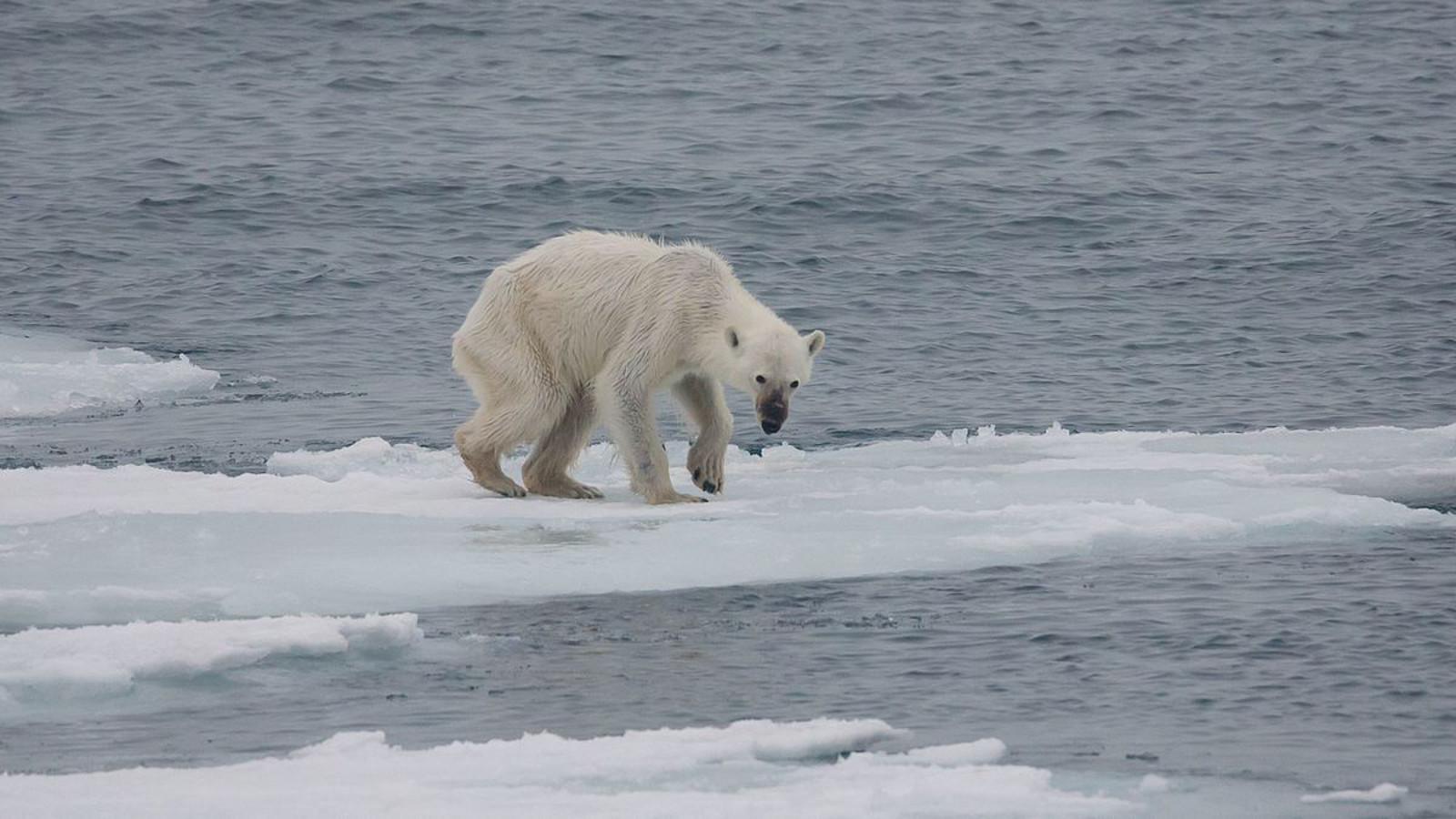 With so much suffering in the world, it can be easy to ignore the plight of this poor emaciated creature, desperately clinging to survival at the edge of the world. But by ignoring the fate of animals, we are also ignoring the fate of ourselves. In many ways, this bear’s disappearance signifies the beginning of a downward trajectory that we may not be able to stop if we don’t seriously take action.

The good news is, there is one simple thing that we can all do every day to help this desperate species recover. One Green Planet believes that our global food system dominated by industrial animal agriculture is at the heart of our environmental crisis.

By choosing to eat more plant-based foods, you can drastically cut your carbon footprint, save precious water supplies, and help ensure that vital crop resources are fed to people, rather than livestock. With the wealth of available plant-based options available, it has never been easier to eat with the planet in mind. Check out One Green Planet’s #EatForThePlanet movement to learn more!

You can also help by urging the U.S. government to stand for climate action. Click here to sign IFAW’s petition demanding clear and swift legislation!