Is Our Obsession With Meat Leading Salmon to Extinction?

Our Earth is getting warmer, as the atmosphere that surrounds us gets higher and higher concentrations of “greenhouse” gases, gases like carbon dioxide and methane that allow light to be transmitted, like a pane of glass in a greenhouse, but do not allow the warmth to be radiated back into space.

The Impact on Salmon

One of the most vulnerable species on Earth is the salmon. Salmon runs around the world have suffered from human degradation for years. Immense runs of salmon that numbered in the millions of fish have been decimated to a trickle or wiped out altogether.

Good examples include the many salmon runs in the Pacific Northwest and California. These runs have been destroyed to the point where several subspecies of salmon are now considered extinct or seriously endangered while still healthy salmon runs are few and far between.

Global warming is looming as a new threat. 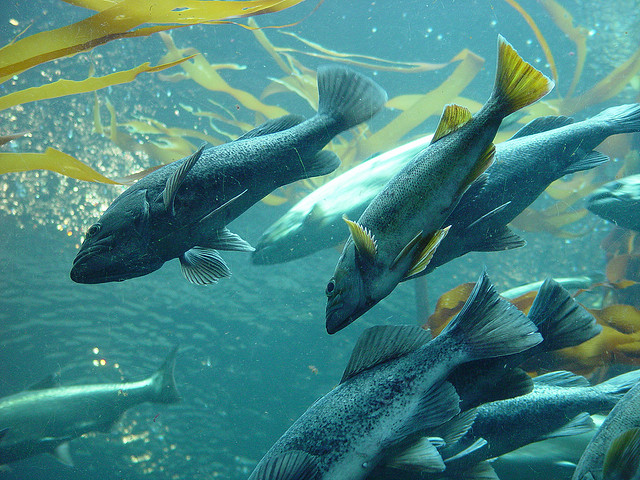 The Role of Dams in Salmon Population Decline

Most of these unique salmon runs have been choked off by dams and habitat loss, especially clear-cut logging. Dams block the access of salmon to their native streams to spawn. While various means have been used to try to reduce the loss of such salmon, through the erection of fish ladders around dams, fish hatcheries, and even trucking salmon around dams, none of these band-aid fixes have worked well.

Logging can complete the destruction of salmon streams. Salmon need cold, clear water and clean river gravels to lay their eggs in before they die, establishing a new generation of salmon that will go to the sea and then return to their native streams. Logging often opens up the forest canopy along streams, allowing the waters to warm up to the point where salmon eggs die before they hatch. Erosion from logging fills streams with mud and dirt that destroys the clean gravel and blocks access to stretches of the spawning streams. Dams and logging, and other activities that destroy stream habitats, like cement channeling of streams and pollution, have led to our current state of endangered salmon species up and down the Pacific Coast of America.

Where it all Connects: Global Warming, Droughts and Salmon

And now salmon streams face a new threat: Global warming. How will global warming hurt salmon streams? Simple: drought. While there have certainly been dry periods in the past, salmon could always regenerate after severe droughts because they still had access to spawning streams. Now those spawning streams are seriously degraded or blocked by dams. So drought in the future will spell extinction for a number of salmon runs that are already reduced to small numbers.

Global warming will change our weather in different ways. It is not easy to predict which areas will get more rain and which will get less rain. Generally, it is predicted that California and other states along the Pacific Coast will likely get less rain – California is now well into its fourth year of drought, with little winter rain or snow. And with warmer weather, snow will melt much more quickly in the high mountains. These snow blankets normally allow cold water to flow through streams even in the hottest summer months along the Pacific Coast. But the combination of warmer temperatures and less snow/rainfall will kill many salmon streams, and along with the streams, the salmon will disappear. 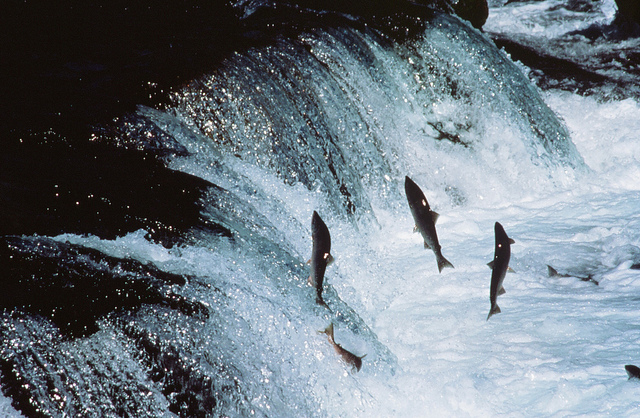 How Does This Impact the Salmon’s Ecosystem

The loss of salmon runs has devastated human communities, including Native American tribes that have depended on salmon for thousands of years, and both sport and commercial fishermen.

But also hard hit has been the Pacific Northwest population of orcas, a resident herd of orcas that eat mainly salmon, and have suffered themselves from the many captures in the 1960s and 70s for the captivity industry (including SeaWorld) as well as pollution problems in their home range of Puget Sound. As their main salmon runs have been depleted by dams and logging impacts, the orcas have now been listed on the US Endangered Species list as the Southern Resident Killer Whales, and number about 80 individuals at this time with the birth of four calves so far this year (but calf survival is very low with these orcas).

Among the measure proposed to protect this imperiled population of orcas is the removal of dams on various salmon streams in the Pacific Northwest and California. It is believed that some of the key salmon runs can restore themselves if these key blocks are removed.

But as Mark Twain is alleged to have said, in the West: “Whiskey is for drinking, and water is for fighting over.” There is a lot of opposition to removing dams from those who benefit from the hydropower and impounded water.

Orcas need freshwater streams full of salmon to survive. We can give them that, and help protect salmon and the health of our Earth.

Reduce your use of energy – walk or bike to work, buy an electric or hybrid car, turn out lights when not in use, put computers and other household appliances on energy strips (such items leak energy when plugged directly into electricity outlets, even when turned off), wear a sweater and turn down your thermostat, avoid using air conditioning. and buy low-energy light bulbs and appliances.

Urge your state and federal representatives to take action to prevent global warming. There are many actions that must be taken to reduce the production of greenhouse gases that cause global warming. State legislatures and the Congress SHOULD be leading the way for an economy based less on fossil fuel use, and more on renewable sources of energy such as solar and wind which do not release greenhouse gases.

Reduce your eating of meat, as livestock release large amounts of methane gas, which is an even more potent greenhouse gas than carbon dioxide. Why not go vegetarian or vegan? You will eat better and help avoid the needless killing of livestock, too. Check out One Green Planet’s #EatForThePlanet campaign to learn more about how you can use your diet to benefit the planet.

Support the efforts of Earth Island and other organizations to reduce global warming!

Thanks for your support – the orcas and the salmon will appreciate it!