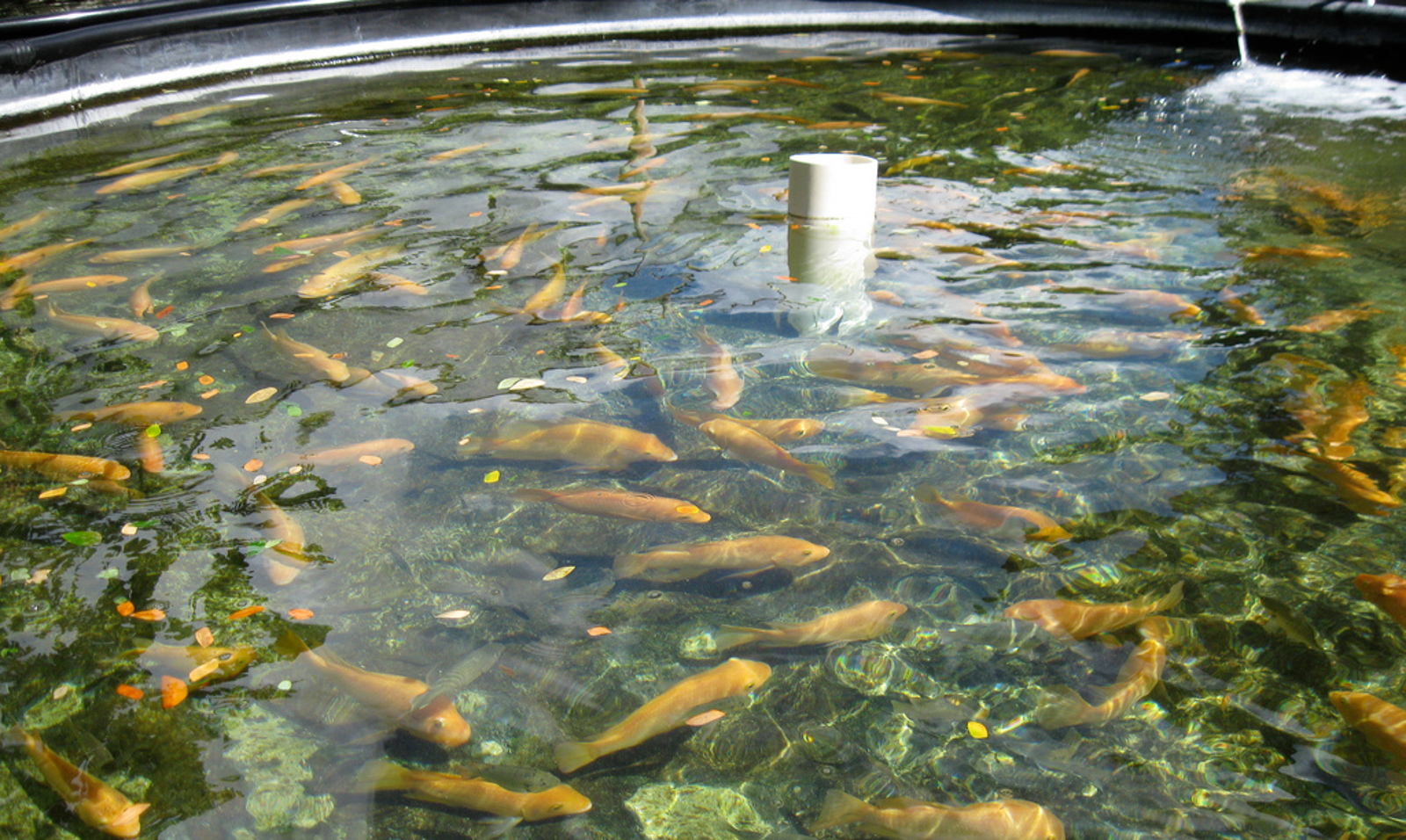 While the concept of factory farming for animals like chickens, cows, and pigs is basically understood by the majority of meat-eaters, there is another group of animals who are subjected to similarly horrendous conditions that most people do not know about: fish.

Just like with other conventional farm animals, our appetite for fish has created the need for us to mass-produce seafood to meet demand. According to the National Oceanic and Atmospheric Association, “On a per capita basis, Americans eat about 3.5 ounces per week.”

This number might seem relatively low, but when 3.5 ounces is multiplied by the 300 million people living in the U.S. that number adds up. Around 80 percent of the world’s fish stocks are over-exploited and if current trends continue, it has been estimated that stocks of every wild-caught seafood will collapse by 2048.

This high demand for fish is quickly wiping out the world’s fish stocks and as this happens, the need for aquaculture, or factory farms for fish, goes up. According to the UN’s Food and Agriculture Organization (FAO), the aquaculture industry is growing at a rate that is three times faster than land-based animal agriculture.

So, we know how pigs, cows, and chickens are treated on factory farms, is life for fish any different?

Life on an Aquafarm

Keeping fish out in the ocean might seem like a better option to raise these animals, but the size of the cages used to house fish has been likened to the battery cages used for egg-laying hens.

Land-based aquafarms do not get the added benefit that the open ocean offers in terms of available sunlight, but rather all light is simulated by farmers. Light exposure speeds up the rate at which fish grow, so some fish are exposed to light 24-hours a day. While this might make fish grow faster, it also negatively impacts the fish’s immune system, making them more susceptible to disease.

In both cases, fish are overstocked and have little space to swim or display their natural behaviors, creating an extremely stressful environment. Lack of space also makes it difficult for smaller fish to avoid larger, more aggressive fish. The combination of stress and aggression leads to high rates of mortality, illness, and injury. Around 40 percent of aquafarmed fish will die before the farmer is ready to slaughter them.

While the above explanation of overcrowding may be reminiscent to conventional factory farms, the similarities to aquaculture and animal agriculture readily show themselves in an exploration of diseases and pollution evident on fish farms.

Daniel Pauly, professor of fisheries at the University of British Columbia in Vancouver, likens aquafarms to, “floating pig farms.” And with good reason. Stocking thousands of fish in a small amount of space and feeding them protein pellets (ironically made from other fish) doused with antibiotics and chemicals, such as PCB, understandably makes for highly polluted water. If you’ve ever had a fish and seen what it looks like when you forget to clean their tanks for a few weeks … you can start to fathom the idea.

Fish take in water through their gills to breathe, so the quality of the water they live in is very important. The water that aquafarmed fish are raised in has high levels of ammonia, nitrate, nitrites, and suspended solids. It is not uncommon that groups of fish will become infested with parasites that feed on the gills, organs, and blood of fish. Bacterial infections also run rampant.

In a land-based aquafarm, this water pollution is isolated to the pool where fish are grown, however, in open ocean farms this pollution is dumped straight into the ocean. Waste falls directly through nets and covers the ocean floor. This waste breeds bacteria that consume oxygen, creating low-oxygen zones. Low oxygen levels not only triggers a stress response in the aquaculture fish, but it has serious ramifications for the surrounding ocean ecosystem. Ocean-grown fish are also fed pesticides in an attempt to limit the amount of algae that grows on nets, meaning toxic copper sulfate is released into the oceans. Add antibiotics into the mix and you get factory farmed fish superbugs.

Are you seeing the resemblance to a pig farm yet?

The process involved in slaughtering aquaculture fish closely parallels the slaughter of other farmed animals. The 60 percent of fish who do survive this brutal life, are starved for up to 10 days before they are killed in an effort to minimize waste contamination in the water that they are transported in on the way to the slaughterhouse.

According to PETA, “Large fish, such as salmon, are sometimes bashed on the head with a wooden bat called a “priest,” and many are seriously injured but still alive and suffering when they are cut open. Smaller fish, such as trout, are often killed by simply draining water away and leaving them to slowly suffocate or by packing them in ice while they are still completely conscious.”

While many people think fish are unable to understand suffering or feel pain, this is hardly the case.

A study done by associate professor Culum Brown of Macquarie University in Australia, found that fish have good memories, live in highly complex social communities where they learn from one another. Brown also found that fish exhibit signs of anxiety and can in fact feel pain.

Aquaculture is animal agriculture by a different name. In the same way that we have created a disconnect that allows us to exploit and abuse farm animals, the same has been done for fish. While aquaculture has been presented as a viable way to produce fish when the ocean’s natural stores are running it, it can hardly be regarded as the solution to our collapsing oceans. Not only does aquaculture also contribute to overfishing as carnivorous fish, such as tuna, require “feed fish” which are often caught from the ocean, but the pollution created by open ocean farms directly harms the ocean ecosystem.

You can help to end the cruelty to factory-farmed fish as well as the residual environmental impacts of aquaculture by lowering your consumption of fish, or eliminating it all together. An individual who follows a plant-based diet can save 225 fish a year. When there are incredible plant-based alternatives to fish, making the compassionate choice has never been more delicious!