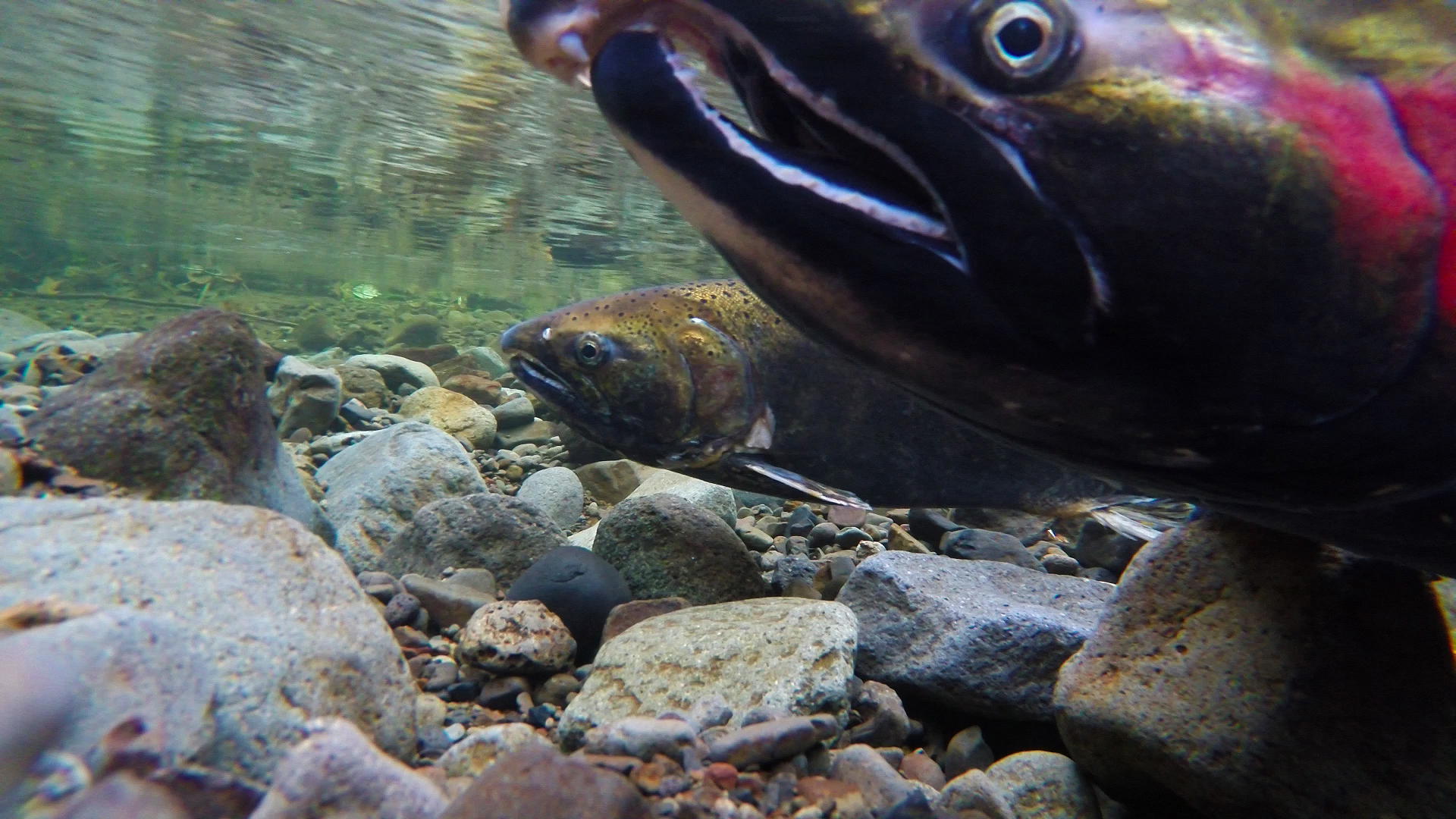 Salmon are arguably one of the most important and iconic animal species in the Pacific Northwest. The region boasts five native salmon species: Chum, Sockeye, King/Chinook, Silver/Coho, and Pink/Humpy. While each species has its own unique biology and characteristics, the common life story that these fish share is nothing short of amazing.

Pacific salmon are anadromous, which means they begin their life in freshwater rivers, streams, or lakes, only to move to the ocean where they spend a number of years maturing. Finally, before the end of their life, they return to the freshwater home of their hatching to lay their own eggs and spawn the next generation. Not only is their story of migration and adaptation an inspiring testament of nature, it is also an important sustaining power in the Pacific Northwest ecosystem.

Being as salmon spend portions of their life in up to thousands of miles of fresh and saltwater habitat, the impact of their existence is felt in many ways. A variety of marine mammals rely on salmon for food, including the endangered Southern resident killer whales which prefer Chinook salmon as a large portion of their diet. Away from the ocean, salmon also play an important part in  nature. They’re a major vector for the transport of nutrients into fresh water ecosystems. When they return to the place of their hatching to reproduce, they carry with them inorganic nutrients like nitrogen and phosphorous from the ocean, depositing these nutrients once their dead bodies come to rest upstream. These nutrients don’t just stay in the freshwater ecosystems. Once predators like bears and eagles remove salmon from the water, the nutrients the fish carry also get deposited into the surrounding terrestrial ecosystem. 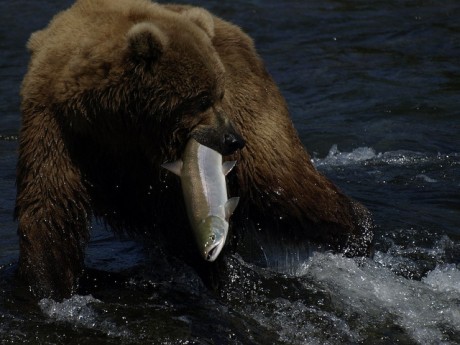 Unfortunately, despite science’s recognition that salmon play a very important role in the Pacific Northwest, the fish are facing increased pressures on their population. Commercial fishing, habitat loss and degradation due to logging, mining, hydraulic dams and agriculture, water pollution, and global warming are just some of the threats faced by salmon in the Pacific Northwest. Additionally, wild Pacific salmon are facing threats from growing salmon aquaculture presence in the region. These efforts to provide more salmon for human consumption are placing increased pressure on already strained native populations and are wreaking havoc on the local ecosystems all in the name of dinner.

Salmon Aquaculture – Why and How?

With worldwide salmon consumption tripling since 1980, the salmon industry is forced to look for new ways to provide enough fish to meet the demands. And because nature is already having a difficult time maintaining natural populations of the fish in the Pacific Northwest, humans have sought new and “creative” ways to harvest more fish. No longer are all salmon wild caught – salmon farms are now supplying a portion of the market with fish. 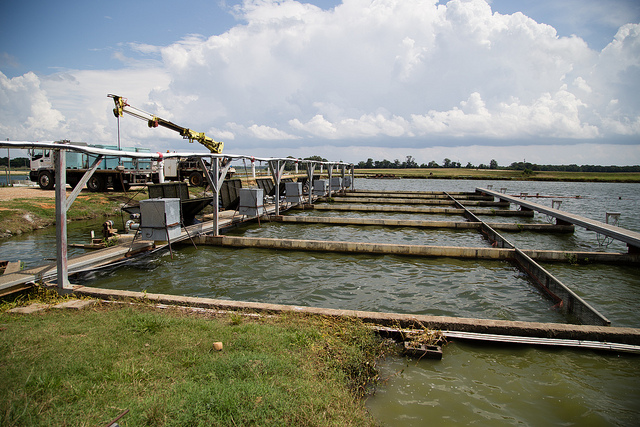 Salmon farms attempt to raise their stock of fish in a manner that mimics nature. Eggs are fertilized in fresh water hatcheries where the fry (salmon tadpoles) hatch. Once the fry mature into smolt, they are able to survive in saltwater. They are transported to netted pens in the ocean where they mature until reaching an acceptable size for harvesting. While the farmed salmon are able to spend their lives in both fresh and salt water, just like their wild counterparts, the process of farming salmon has some stark contrasts to nature, and actually acts as a detriment to the local ecosystem and wild salmon populations.

Like most modern, conventional animal agriculture systems, salmon farming has many flaws. The desire to provide food for a growing population is understandable, however, the system is proving to be dangerous to the environment in several ways.

First, the salmon raised in salmon aquaculture operations in the Pacific Northwest are largely alien species. The majority of farmed salmon in the Pacific Northwest are actually Atlantic salmon! And while netted ocean pens are designed to contain the farmed salmon, they do fail and allow fish to escape into the ocean. With Pacific salmon already struggling to survive, the influx of invasive Atlantic salmon species increases the amount of completion native species must contend with for food and habitat.

Sadly, competition isn’t the only way that famed salmon threaten wild salmon. By concentrating large numbers of fish in small areas, the environment is ripe for the spread of disease and parasites. There are raising concerns over the possible spread of infectious salmon anemia from farmed salmon to wild salmon. The potential for an outbreak could devastate the wild populations. Sea lice are another problem that thrive in the cramped conditions of sea pens. Wild salmon swimming by can easily catch sea lice which becomes especially troublesome in large infestations and for younger fish. Even without directly mingling with wild salmon, farmed salmon can increase the number of health threats that wild salmon face in the Pacific Northwest.

Local salmon populations aren’t the only animals hurting from the introduction of farmed salmon into the Pacific Northwest. Naturally, a heavy concentration of fish attracts predators to the sea pens, including sea lions, seals, dolphins, and birds. Many of these animals risk drowning in nets or even being shot by concerned fishermen wanting to protect their stock. Without a fail-proof way to discourage marine predators from trying to find a meal in a sea pen, unintentional deaths of these animals is unavoidable with salmon farming.

Unfortunately, the environmental damage of farmed salmon is not restricted only to the animals in the local ecosystem. The process itself of having an agricultural operation in the ocean is very harmful. As is typical with any conventional agricultural endeavor, salmon farms face some of the same criticisms that many terrestrial agricultural operations face. Chemical pollution from these operations is especially detrimental. Pens are treated with paints that discourage other sea life from attaching to them. Pesticides are used to treat concerns such as sea lice that flourish in salmon farming operations. Farmed salmon are even fed a colorant to dye their flesh the reddish, pink color that consumers are familiar with. All of these foreign chemicals are administered on a regular basis to concentrated areas of the ocean where salmon farm pens are present, making the ocean directly surrounding the farms to be especially polluted.

In addition to the chemicals affecting water quality surrounding salmon farming operations, the natural buildup of concentrated nutrients is also a concern. All of that fish poop in such a small area can lead to nutrient buildups which cause algae blooms. Not only can the farmed salmon suffocate and die in such conditions, but water quality for all other animals in the area of the bloom is also impacted.

Depletion of Other Fish Populations

Finally, the environmental impact of salmon aquaculture falls in line with the production of other animal protein sources for human consumption. Producing food higher up on the food chain requires more input. Roughly five pounds of smaller fish are needed for feed to produce each pound of salmon. Those fish must be harvested from the ocean and thus face the same issues that any other fishing industry has. The potential for overfishing and threats to competing marine predators remain, even with this agricultural approach to seafood. As with a vegetarian or vegan’s concerns for avoiding beef or chicken due to the heavy inputs necessary for the meat’s production, salmon faces the same criticism.

As our population grows, demand for food will naturally grow with it. To meet the needs of a growing appetite, we will have to be highly innovative in providing enough healthy food for all. And while salmon aquaculture does attempt to meet growing demands for food without over-harvesting wild populations, the system itself is obviously flawed and, for some, impossible to accept.

There are serious sustainability questions about this form of animal agriculture, and ignorance to the damage salmon aquaculture can do to the Pacific Northwest ecosystems will be highly destructive. This agricultural endeavor does not exist within a vacuum, surrounded by impenetrable borders that seclude it from the natural world. Instead, salmon farms exist within the ecosystem and amongst all of the other species, influencing them in potentially harmful and irreversible ways. Salmon may be treated as a powerful health food and desirable alternative to red meat, however, the environmental concerns for the production of this food source make it a difficult choice to accept for those more concerned for the health of the planet.

So why not #EatForThePlanet and take all of these concerns off the table by trying a plant-based version of your favorite salmon recipes? There are many plant-based foods that boast the same nutritional benefits of salmon, without any of the marine ecosystem destruction.